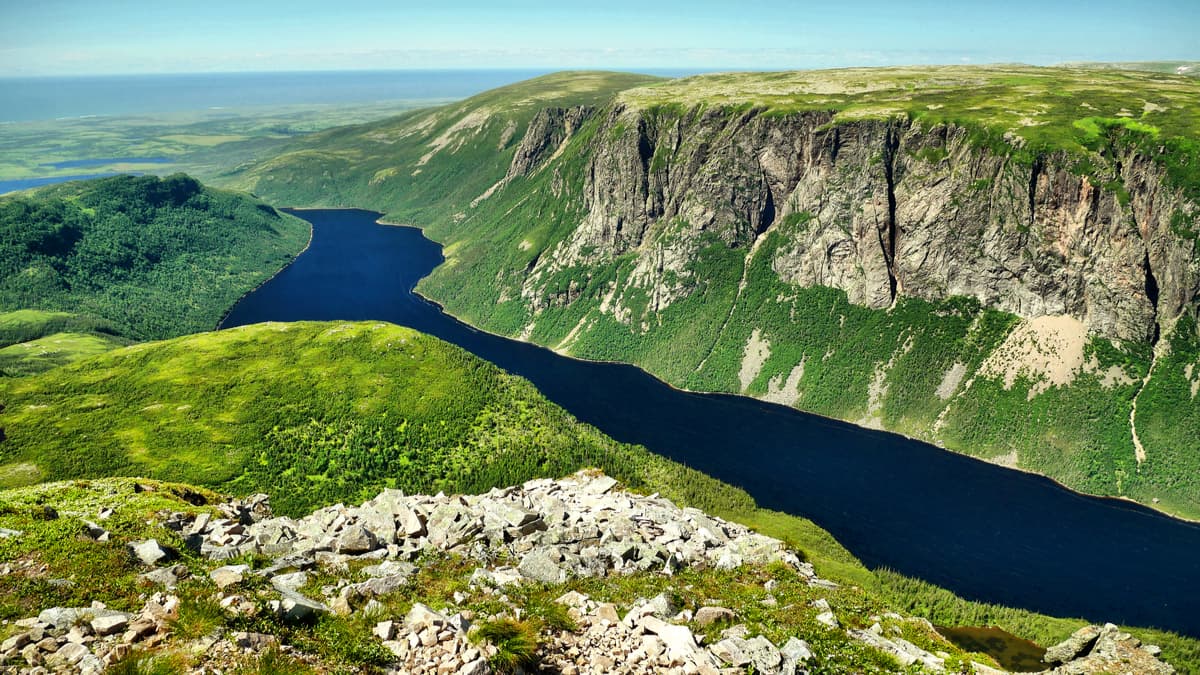 This spectacular set of summits extend for 250 miles along the western shore of Newfoundland and average 2,200 feet in elevation. Several of the tallest peaks in the Long Range Mountains can be found in Gros Morne National Park, including the park’s namesake summit, Gros Morne, Big Level, Rocky Harbour Hill, Big Hill, and Old Crow.

Gros Morne’s impressive peaks and valleys are the eroded remnants of a mountain range that formed 1.2 billion years ago, and the park serves as an unparalleled example of plate tectonics. The park’s heavily glaciated, steep-sided glacial valleys and fjords, uninhabited mountaintops, weathered sea stacks, striking cliff sides and stunning shoreline make it one of the most geologically diverse landscapes in the world. In fact, the park contains accessible exposures of exposed oceanic crust, mantle, and the Mohorovicic discontinuity (the boundary between the crust and the mantle).

Gros Morne is known for its diverse ecosystems and diverse plants and animals. The arctic-alpine ecosystem can be explored at higher elevations in the park. This is where barren ground and artic-alpine vegetation thrive, and Arctic hare and rock ptarmigan can be found.

The freshwater ecosystem in Gros Morne contains large lakes and lowland rivers, as well as ponds and streams. Western Brook Pond, a freshwater fjord, is a popular destination for visitors. Western Brook was carved out by glaciers from 10,000 to 25,000 years ago. This 19-mile, narrow pond is known for its exceptional purity. Pissing Mare Falls, the highest waterfall in eastern North America, cascades for an incredible 350 feet from Big Level Plateau into Western Brook Pond.

The forest ecosystem spans the majority of the park and contains coniferous and mixed forests. Visitors might even be fortunate to catch a glimpse of resident moose in the park’s forested region! Black bear, caribou, red fox, lynx, and river otters also call the park home.

The Gros Morne Mountain trail is a 10-mile, strenuous footpath that ascends 2,600 feet and requires 6 to 8 hours to complete. Don’t worry, your efforts will be rewarded with sweeping views of the Ten Mile Pond and several surrounding Long Range Mountain summits. Gros Morne’s flat summit sits in the park’s Arctic-alpine ecosystem, which also means you’ll have the opportunity to see Arctic hare, rock ptarmigan, and a range of arctic-alpine plants.

This 6.2-mile trail traverses through balsam fir forests to the wide step-like waterfalls of Baker’s Brook. Along the trail you’ll notice the forest is in several different stages of regeneration. This need for regeneration is due to the natural effects of winds and insects, as well as the heavy browsing from moose. While you’re making your way to and from Baker’s Brook Falls, keep an eye out for “moose exclosure” areas to see how they have impacted the forest!

For the “best view in Newfoundland,” consider making the trek to Western Brook Pond. There are two different ways to experience this iconic viewpoint – both require a moderate to high level of fitness. First, you can take a guided hike with BonTour. The adventure begins via a high-speed boat ride across the fjord. Once on the other side, you’ll begin a 7.5-mile, strenuous climb to the top of the gorge. The second option is a multi-day traverse that covers 22 miles. This backcountry trail has no trail markings, so visitors are expected to have navigation and map reading experience. Though this hike isn’t for the faint of heart (or those lacking in backcountry experience), it is well worth the effort. National Geographic considers this footpath to be one of the world’s best hikes.

Bambury’s Hillside Chalet is a newly constructed Hillside Chalet nestled on a quiet hillside in Gros Morne National Park. Aside from its proximity to the park, Bambury offers visitors full-equipped accommodations, including a private deck where visitors can kick back and watch the sunset over Gros Morne.

Norris Point is a charming coastal community located just outside of Gros Morne National Park. The community, which gets its name from Neddie Norris, the first European settler in this area, is in the heart of western Newfoundland’s popular tourist area. Despite its small-town feel, Norris Point has a number of accommodations, amenities, and activities, like the Norris Point Lookout and Jenniex Heritage House, for guests to enjoy. Norris Point is located just off the Viking Trail, Route 430, which progresses from L’anse aux Meadows and St. Anthony at the northern tip of Newfoundland south to Deer Lake.

Rocky Harbour is the largest community in Gros Morne National park and is the ideal basecamp for exploring the park. Rocky harbor offers plenty of amenities and accommodations, including Hotels, Bed & Breakfast inns, Cottagers, and campgrounds. During downtime, visitors can take advantage of several attractions, including the Lobster Cove Head Lighthouse or the site of the wreck of the S.S. Ethie. 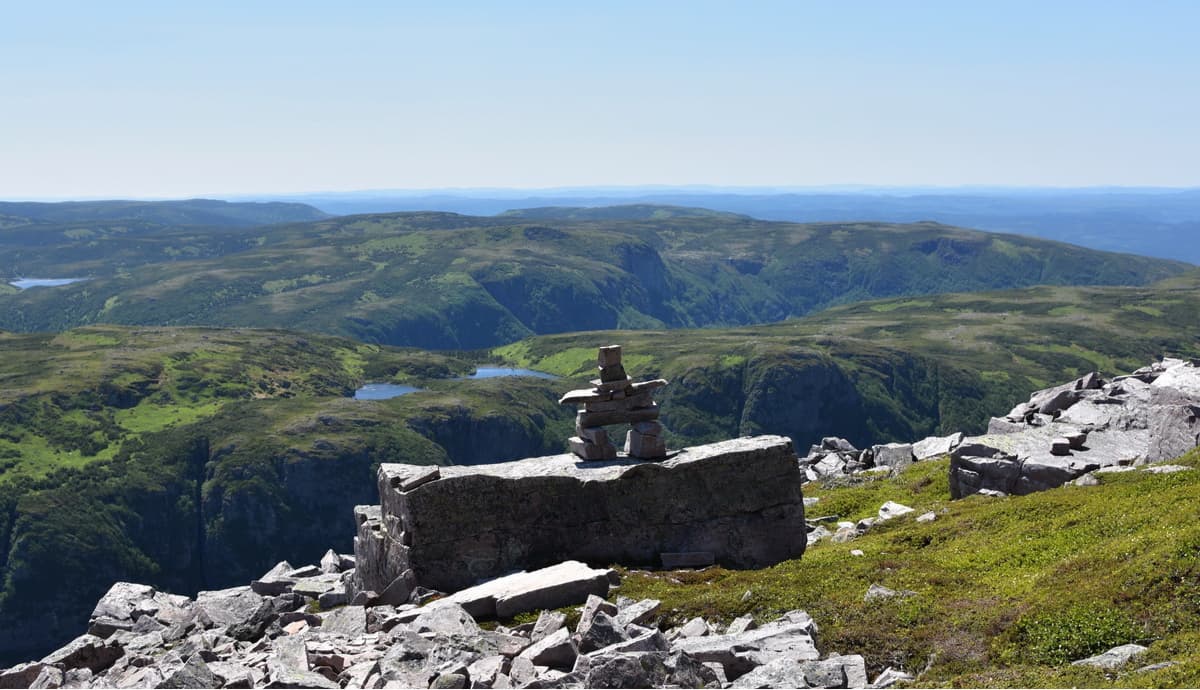 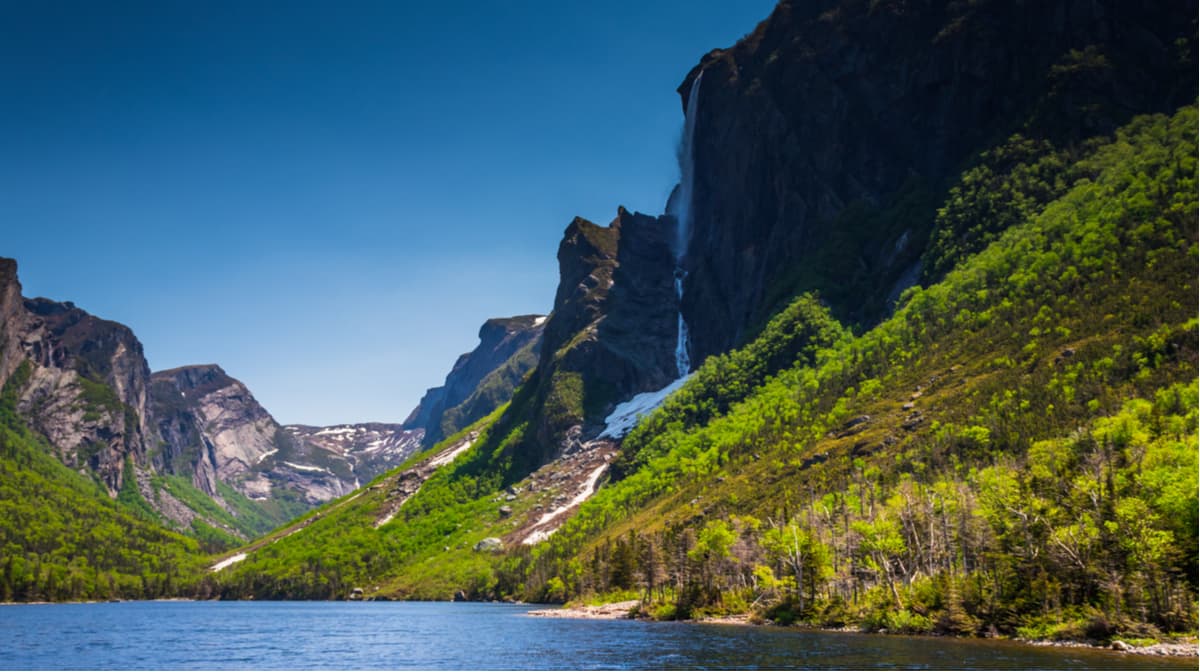 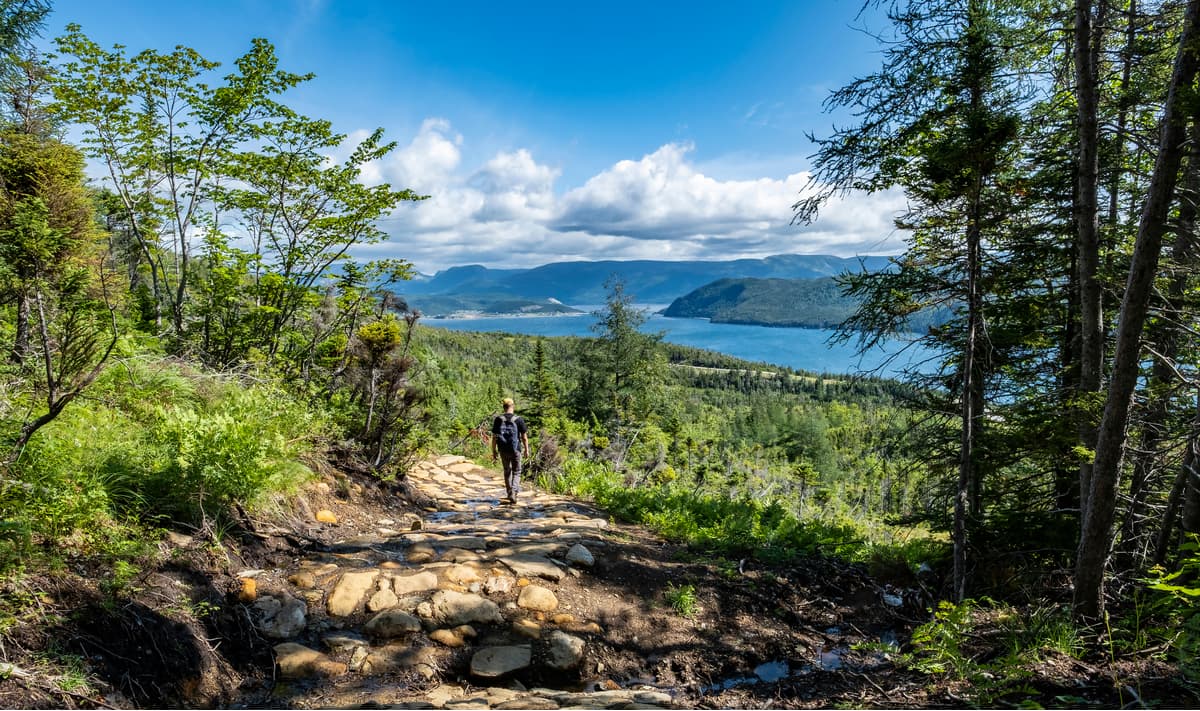 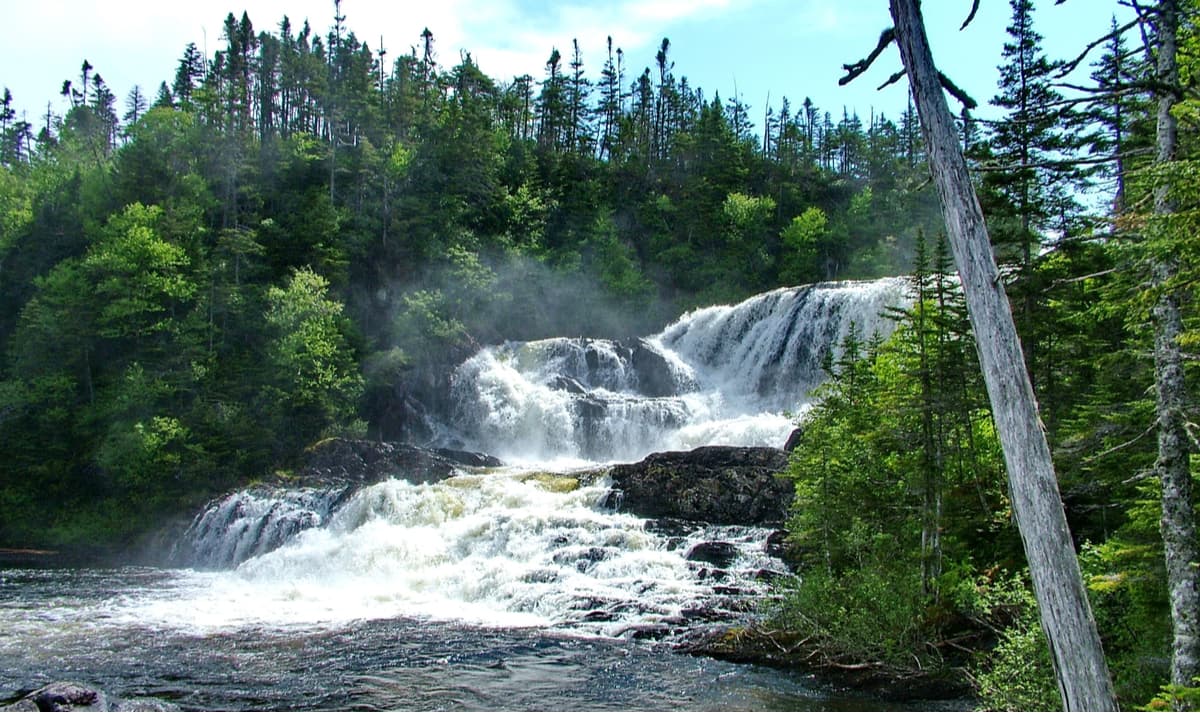 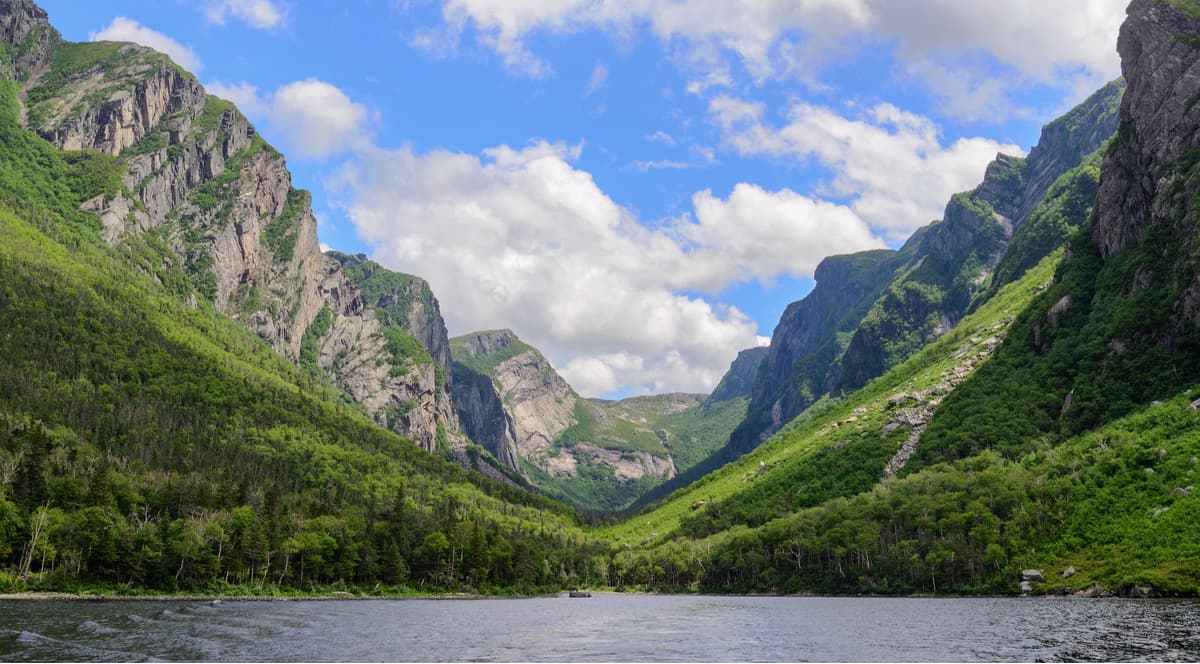