The Great Range is the heart of the High Peaks Wilderness of the northern part of the US state of New York. Home to the Adirondacks’ tallest mountains and some of its most challenging climbs, the Great Range contains 16 named peaks, the highest and the most prominent of which is Basin Mountain (or nearby Mount Marcy, depending on who you ask). 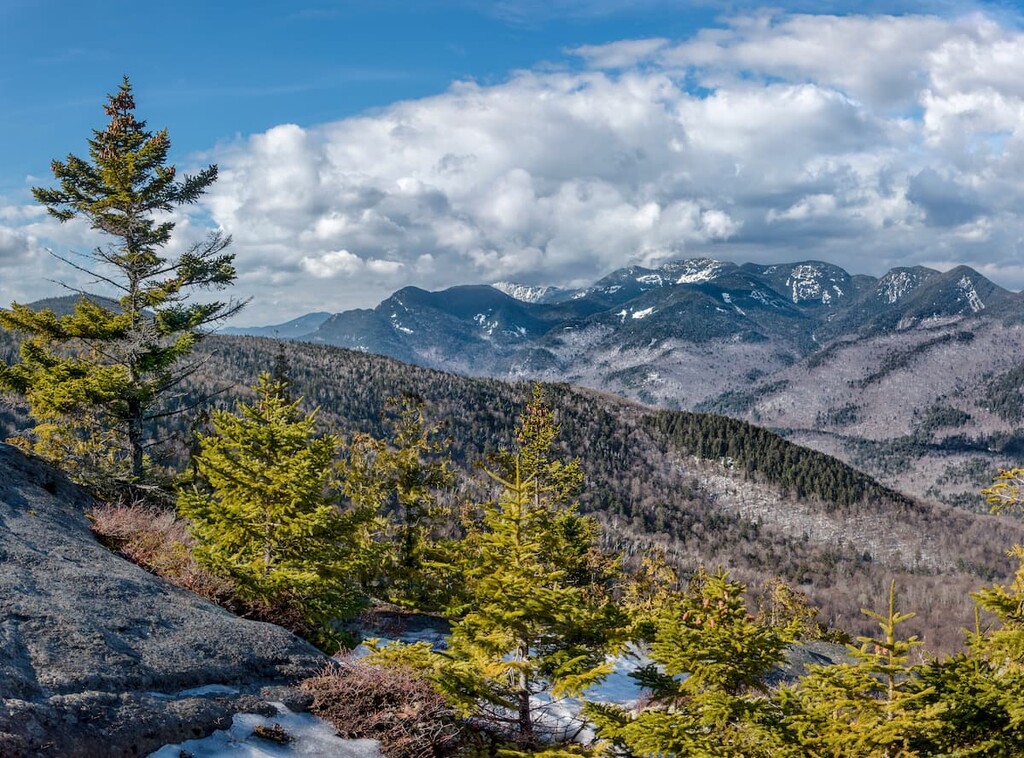 The Great Range runs about 12 miles (19 km) in a northeast–southwest direction, between Johns Brook Valley and the Ausable Valley, in the High Peaks Wilderness of the Adirondack Park in upstate New York.

Mount Marcy, the tallest peak in New York, is adjacent to the range and often climbed along with it. But it isn’t a “historical” part of the Great Range (although you’ll hear many people refer to it as part of the range). Several other peaks in the area, including Sawteeth and Pyramid Peak, aren't technically included but are also commonly associated with the range.

The Great Range Traverse, which takes climbers over the highest peaks of the range and finishes on Mount Marcy, is one of toughest treks in the area. The traverse covers a grueling 25 miles (40 km) and nearly 10,000 ft (3,048 m) of elevation gain. It’s been rated as one of the most challenging day hikes in the US.

The mountains of the Great Range are some of the highest in the Adirondacks, a unique dome-shaped mountain range that’s some 160 miles (257 km) wide and 1 mile (1.6 km) high.

The Adirondacks are unique in the northeast and formed differently from the mountains of the Appalachians. Some of the bedrock exposed on the rocky summits of the Great Range is over a billion years old. The Adirondacks began rising during the Grenville Orogenic Cycle, and they’re still rising at a rate of about a foot per century.

Most of the rock that makes up the Great Range and the other peaks of the Marcy Massif are coarse, andesine anorthosite.

Anorthosite is an intrusive igneous rock with a high concentration of plagioclase feldspar, typically labradorite, which has a shimmering property called “labradorescence.” While anorthosite is rare on earth, it’s relatively common on the surface of the moon.

The rocks of the Great Range are some of the most ancient on Earth, but the landforms we see today are relatively recent, formed in part by glaciation when the Laurentide Ice Sheet covered the area during the last glacial maximum.

From the open summits of the Great Range, you can view the large boulders (called glacial erratics) deposited on mountain slopes, along with the amphitheater-shaped cirques, kettle ponds, glacial lakes, and deep valleys carved by the ice sheet.

The highest and most prominent point in the Great Range is Basin Mountain at 4,852 ft (1,479 m), though nearby Mount Marcy would be the tallest peak if you included it within the range. Other notable peaks in the range include Gothics, Saddleback, and Armstrong Mountains.

The Great Range is home to dense boreal and northern hardwood forests, along with some of the rarest high alpine environments in the northeast.

At lower elevations, pine, spruce, larches, beech and maple trees are common. Above the treeline, however, the summits are populated by hardy, low-lying plants that are more commonly found in the Arctic tundra thousands of miles to the north. These alpine zones are some of the rarest ecosystems in the northeast, with only a few other examples found on the highest peaks in Vermont, New Hampshire and Maine.

Some of the unique plants in this region include Lapland rosebay, an alpine rhododendron that takes two years to flower, and Boott’s rattlesnake root, which is found in only 20 places on Earth.

These ecosystems are extremely delicate and they’ve been severely impacted by hiker traffic over the years. Be sure to stay on the rocks and never walk on any vegetation when you’re on the summits of the Great Range.

The largest mammals in the area are moose, deer and black bears. Bear activity is high enough in the region that campers are required to use bear canisters in the Great Range (Adirondack bears are too accustomed to bear hangs). There are also large birds in the area, including bald eagles, ospreys and great horned owls.

While the oldest human settlements in the Adirondacks date back more than 11,000 years, the most recent Indigenous inhabitants, members of eastern Iroquois (Haudenosaunee) groups, first arrived in the area between 1,200 and 4,000 years ago.

The most active tribe in the area of the Great Range prior to European contact was the Mohawk (Kanienʼkehá꞉ka), who used the area for hunting, fishing and transit. There was limited permanent settlement during this time in the most mountainous parts of the High Peaks due to their challenging weather and terrain.

The Mohawk were known as the “Keepers of the Eastern Door,” the easternmost members of the powerful Iroquois Confederacy, also called the Six Nations. There were approximately 8,000⁠–11,000 Mohawk people in the Adirondack region before the arrival of European settlers, with the highest number concentrated around what is now called the Mohawk River to south of the High Peaks area.

Encroachment and violence by settlers of European descent began to push the Mohawk north toward more isolated and inaccessible areas of the Adirondacks. After the Revolutionary War, the new US government made more aggressive moves to strip Tribal Nations of their land.

In response to this, many Mohawk migrated north toward the Canadian border. Large numbers of the Mohawk from the Adirondacks, who are today the Saint Regis Mohawk Tribe, settled at the Akwesasne/Saint Regis Mohawk Reservation on the US/Canada border. Over 100,000 members of the Six Nations, 30,000 of whom are Mohawk, live in the US and Canada today.

After European and American settlers came to dominate the landscape, the High Peaks were exploited for timber and mining interests. The deserted mining town of Tahawus, which is located near Newcomb in Essex County, can still be accessed by intrepid hikers.

By the mid nineteenth century, the Adirondacks were becoming an increasingly popular destination for wealthy tourists and hikers, and they were formally preserved as Adirondack Park in 1892.

Climbing in the High Peaks has skyrocketed in popularity in part thanks to the Adirondack 46ers, the storied group of hikers who’ve summited all of the 46 High Peaks in the Adirondacks. Ever since brothers Robert and Geogre Marshall and their guide, Herbert Clark, first accomplished the feat in 1925, over 13,000 people have gone on to climb all the peaks.

Today, the Great Range is one of the most visited destinations in the High Peaks Wilderness, drawing hikers from all over the country.

The premiere hike in the Great Range is no doubt the Great Range Traverse. This is a brutal 25 mile (40 km) trek that gains over 10,000 ft (3,048 m) of elevation and features some technical challenges. There are long, steep rock scrambles, ladders, highly exposed pitches and even a cable-assisted scramble up the side of Gothics.

The Great Range Traverse forms a wide “V” shape, with most hikers following it east to west. The trail starts with a steep 1,770 ft (539 m) climb up over Rooster Comb, then Hedgehog Mountain before gaining its first High Peak on Lower Wolfjaw.

Hikers should make sure they have enough water before starting up Lower Wolfjaw because the next reliable water source is below Haystack Mountain. From here on out, the trail spends significant time in the exposed, high-alpine areas.

There’s no camping allowed above 3,500 ft (1,066 m) in this area, either, with the exception of the Sno-Bird campsite. So, don’t plan on being able to stop along the trail and camp when you’re tired.

From the Wolfjaws, hikers proceed to Armstrong and then to the challenging, exposed climb up the west side of Gothics. From Gothics, you can make side trips to Sawteeth and Pyramid Peak, both of which have some of the best views in all of the Adirondacks.

From here, the next peaks are Saddleback, which features a steep and challenging descent of the Saddleback Cliffs, Basin Mountain, and Haystack Mountain. The final climb takes hikers over Mount Marcy, the highest peak in New York state.

While the descent from Mount Marcy to the end of the trail at Adirondack Loj isn’t particularly steep, it’s nearly 7 miles (11 km) long. Most people prefer to hike in this direction so they can finish with the gentle descent as opposed to a technical one down Rooster Comb. This hike is long enough to make a great overnight, although many people do it as a long day hike.

The Great Range Traverse is a serious trail not recommended for beginner hikers, children or those with a fear of heights. That said, it’s one of the most rewarding climbs in all of the Adirondacks, with incredible views and unique trails.

Day Hikes in the Great Range

If you’re not ready to go for a single-day trek through the Great Range Traverse, some of these peaks make excellent (if challenging) day hikes.

The small towns of Keene and Keene valley are the closest to the Great Range. They have excellent small hotels and amenities, but if you’re looking for ritzier resorts or more dining and entertainment options, head for Lake Placid or nearby Saranac Lake. Here’s what you need to know about the towns near the Great Range:

This area includes the hamlets of Keene, Keene Valley and St. Huberts, with a total population of just over 1,000 people. While they’re tiny, these are charming small towns with serious draws for hikers and outdoor enthusiasts of all stripes.

In addition to peak bagging, visitors to Keene can enjoy rock climbing (the Beer Walls and the Chapel Pond Slabs off of Route 73 are home to some of the best-known climbs in the area) and easy day hikes to several beautiful waterfalls. The 100-foot (30 m) Roaring Brook Falls and 20-foot (6 m) Bushnell Falls are both worth a visit if you’re in the area.

Located about 20 miles (32 km) from the main trailheads for the Great Range, Lake Placid is a beautiful mountain town of approximately 2,300 year-round residents and one of the main tourist destinations in the Adirondacks.

Lake Placid hosted the Winter Olympics in 1932 and 1980 and much of the winter sports infrastructure from those events, including the ski jumps, speed skating rink, and bobsled run, are all still in use there today.

The town of Lake Placid is actually located on the shores of scenic Mirror Lake (not Lake Placid—confusing, we know), and it offers visitors access to hiking, boating and cultural amenities in a beautiful small town setting. 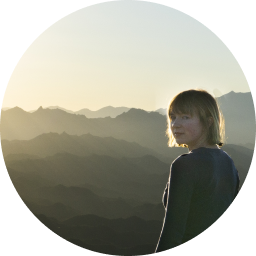 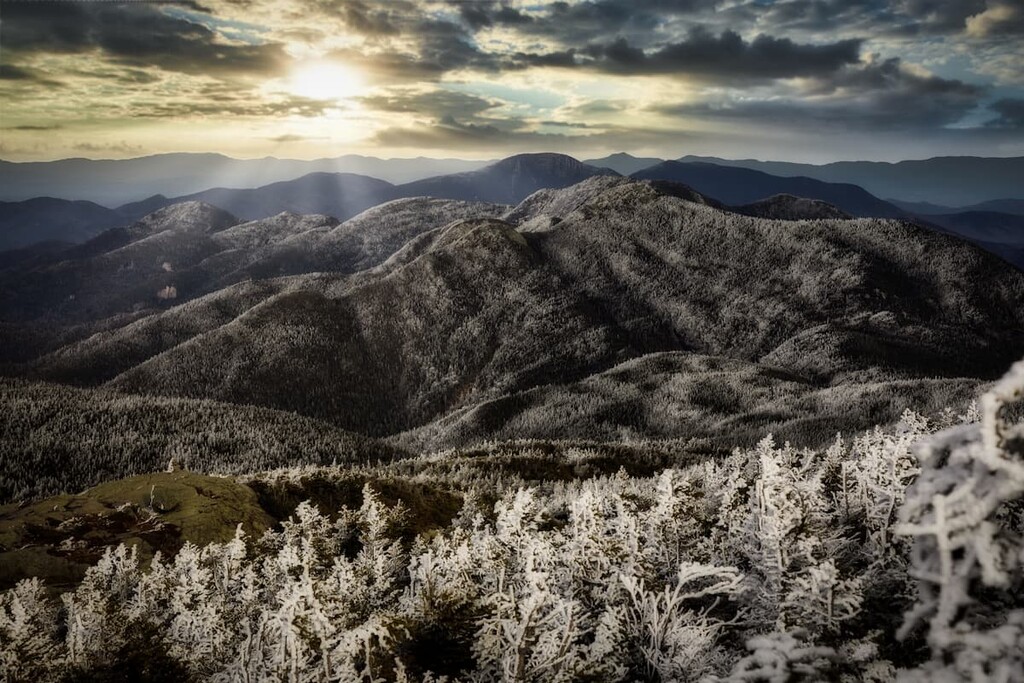 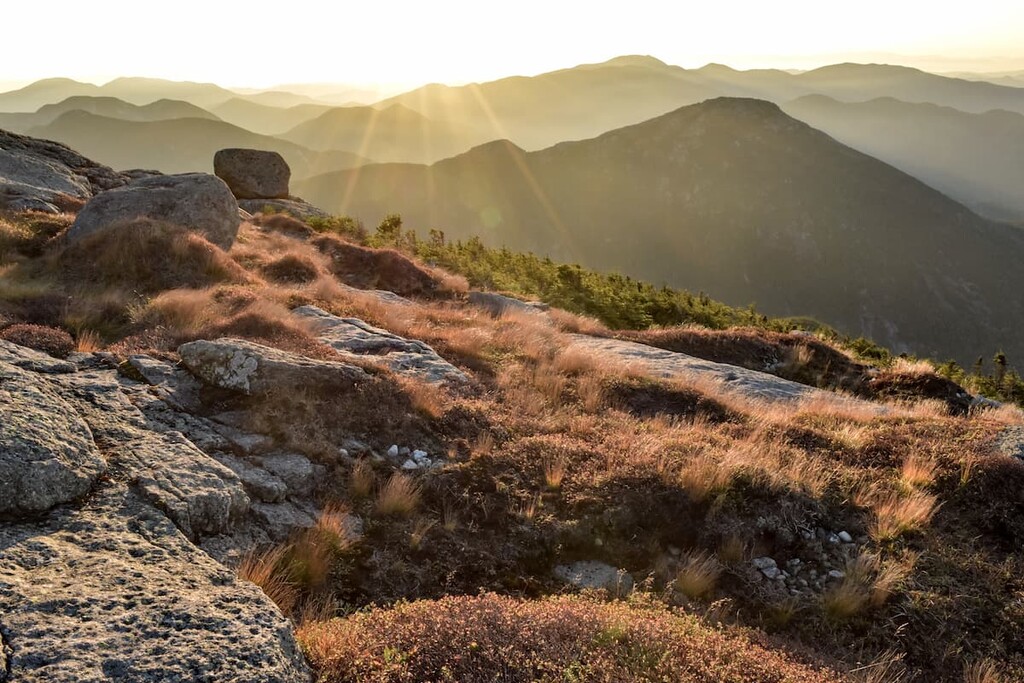 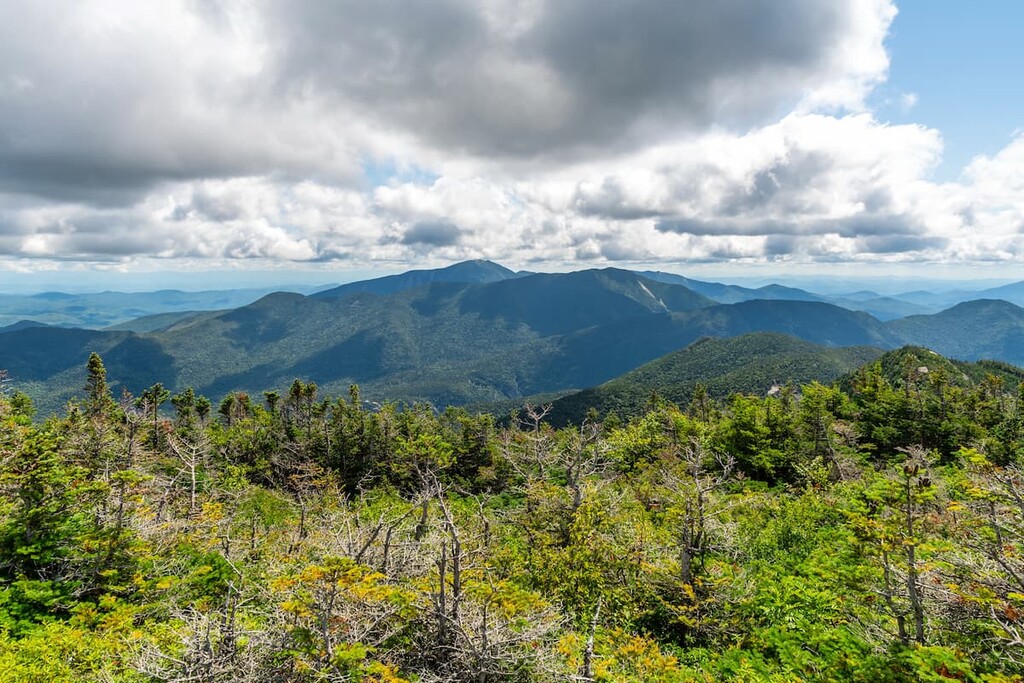 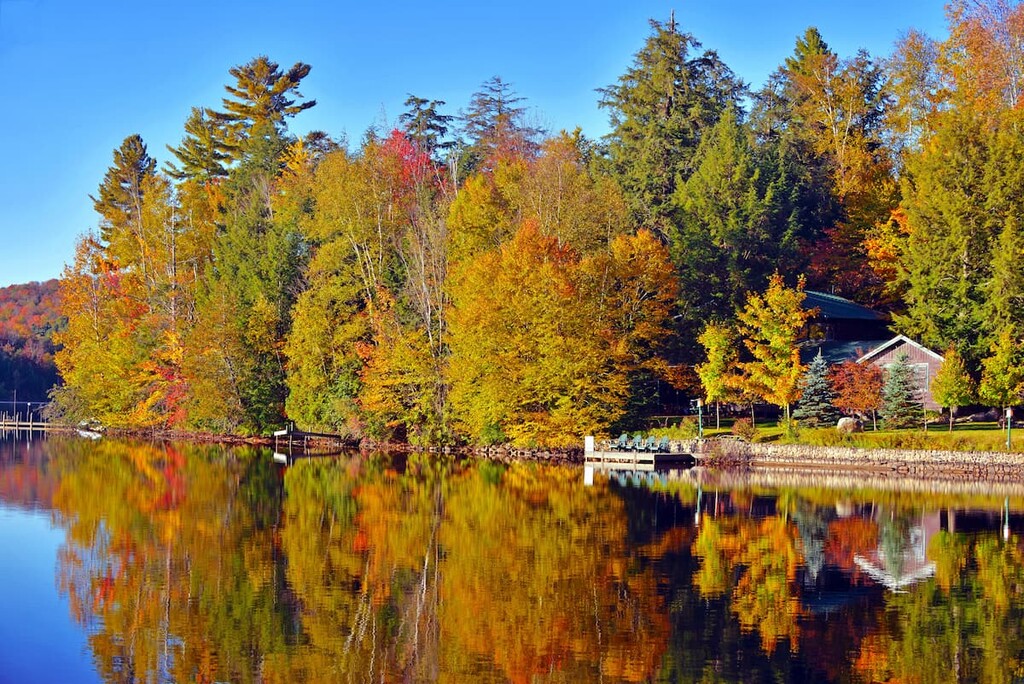 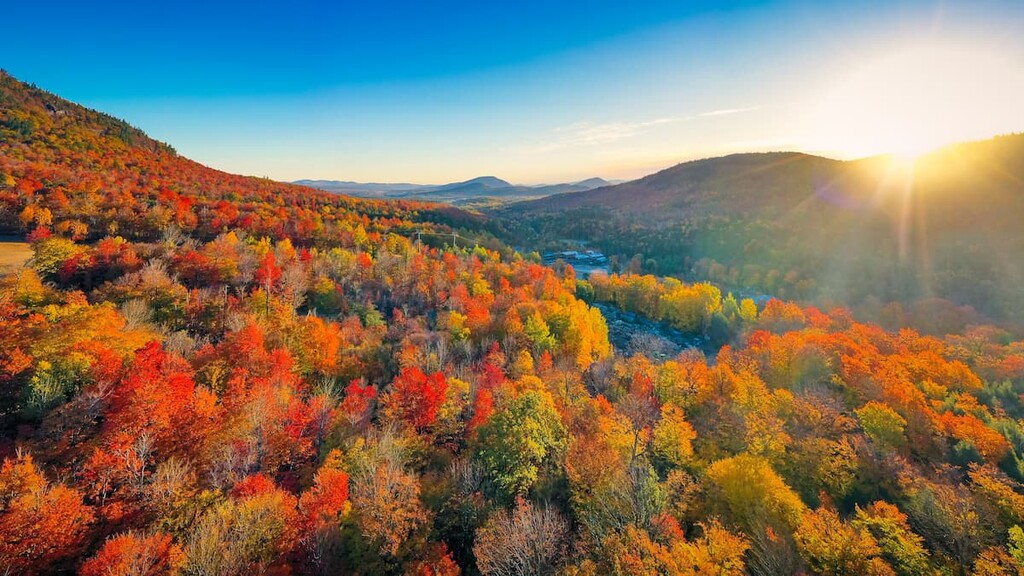