The Giant Mountain Wilderness is home to 18 named mountains, including two official Adirondack High Peaks with rocky, open summits and spectacular views. The highest and most prominent peak in the wilderness area is Giant Mountain, the twelfth highest peak in the US state of New York. 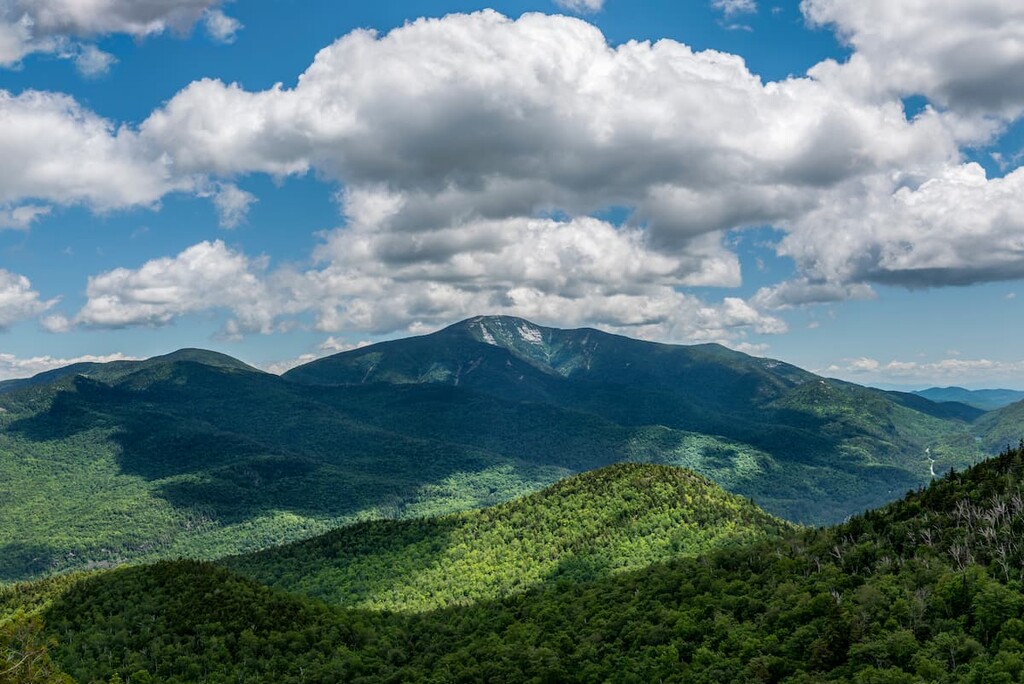 The Giant Mountain Wilderness is a tract of wild, mountainous land in the north-central region of the Adirondack Park. The wilderness area covers 23,116 acres (9,355 ha) across the towns of Elizabethtown and Keene in Essex County in the US state of New York. It is situated to the north of the Dix Range and west of the High Peaks Wilderness, separated by Route 73.

The summit of Giant Mountain sits 4,102 ft (1,222 m) above the park’s lowest point on Route 9 east of Iron Mountain, which is the largest change in elevation found in any wilderness area in the park. The only major waterbody in the wilderness is the Giant Washbowl, a 4.3 acre (1.7 ha) pond.

The Giant Mountain Wilderness is popular for hiking, as well as hunting, fishing, trapping, and rock and ice climbing. There’s one lean-to in the area on the North Trail to Giant Mountain, as well as 16 designated tent camping sites. Climbing the rock slides on Giant Mountain and Rocky Peak Ridge is also popular among experienced climbers.

The Giant Mountain Wilderness is part of the High Peaks region, the core of the tallest mountains in the Adirondack Mountains. The Adirondacks are unique in that they’re grouped together as a dome shape, as opposed to a long chain of mountains like the Appalachians.

Sometime in the last several million years, the zone of the Adirondacks began to uplift, for reasons that are still unclear to scientists today. As the mountains rose, the softer sedimentary rock on the top layer eroded away, leaving the hard, exposed bedrock we see today in the Adirondacks. The mountains are still rising about 2 millimeters per year.

In the High Peaks region around the Giant Mountain Wilderness, most of the mountains are made of anorthosite, an extremely hard intrusive igneous rock with a high concentration of plagioclase feldspar. This rock, while rare on Earth, is relatively common on the surface of the moon. You can see large runs of anorthosite in the rock slides on Giant Mountain and Rocky Peak Ridge.

The Giant Mountain Wilderness, along with the rest of the Adirondack Park, sits in the transition zone where the North American Boreal Forest (which covers much of Canada) meets the hardwood forests of the eastern US.

In this zone, hardwood and softwood forests mix at various elevations. There are large stands of balsam fir and red spruce trees in the low-lying, marshy areas of the wilderness, and extensive northern hardwood zones in drier areas characterized by beech, sugar maple, and birch trees.

At higher elevations, the forests are mostly coniferous, ending with small and stunted balsam fir trees around 4,000 ft (1,219 m) of elevation. Rocky Peak Ridge is home to a 40-acre (16 ha) tract of summit grassland, which is thought to be one of the largest and best-preserved of its kind in the Adirondack Park.

Most of the forests of the Giant Mountain Wilderness were logged extensively before preservation, and many areas experienced serious forest fires and mudslides in the last century. However, there is one 170-acre (69 ha) stand of old-growth hemlock trees near Roaring Brook Falls. These are some of the oldest hemlock trees in the Adirondacks, with some dating back to the late sixteenth century.

In terms of wildlife, there are thought to be over 100 species of birds in the Giant Mountain Wilderness, including Bicknell’s thrush, great horned owls, and several species of hawks. Some of the largest mammals in the area are white-tailed deer, black bears, bobcats, fishers, and porcupines.

Finally, although there are thought to be only about 400 moose in the Adirondack region, there have been moose sightings in the Giant Mountain Wilderness.

The area of the Adirondacks has been inhabited for over 11,000 years. The most prominent tribes in the area before European contact were the Mohawk (Kanienʼkehá꞉ka) and a number of Algonquian tribes.

The Mohawk, the eastmost members of the Haudenosaunee (Iroquois) Confederacy, lived primarily in what’s now called the Mohawk Valley south of the Adirondacks, while the Algonquian tribes were more active on the other side of Lake Champlain in what’s now called Vermont.

Neither group had extensive permanent settlements in the rough mountainous terrain of the High Peaks, but they both used the area for hunting, fishing, transit, and trade. The Mohawk were pushed further north into the mountains after the arrival of European and American settlers, with many being forced to resettle over the border in Canada.

Today, a large group of the area’s original inhabitants live on the Akwesasne/St Regis Mohawk reservation north of the Adirondack on the US/Canada border.

After European and American settlers came to dominate the landscape, the forests of the Giant Mountain Wilderness were logged heavily. Giant Mountain was the first major High Peak in all of the Adirondacks to be climbed by a person of European descent, a feat which is attributed to surveyor Charles Broadhead in 1797.

By the second half of the nineteenth century, tourism was becoming a major draw to the Adirondacks. The Adirondack Park was officially created in 1892, and most of the lands of the Giant Mountain Wilderness were acquired by the state by 1920. Loggers would either sell or abandon their land after the timber had been cut to avoid paying taxes and the tracts would return to the state.

Since preservation, the forests of the Giant Mountain Wilderness have experienced major forest fires and mudslides, but they’ve largely recovered. Limited signs of old logging can still be seen, but the forests feel pristine and wild today.

There are lots of great day hikes in the Giant Mountain Wilderness, with everything from short waterfall hikes to ridgeline scrambles. Here are some of the best hikes and adventures to check out in the wilderness:

Five different trails lead to the top of Giant Mountain, where you can enjoy 360-degree views of the High Peaks and the Champlain Valley.

This trail follows an open ridgeline, giving scenic views for much of the trip. The trail passes the Giant Washbowl pond and the Giant Nubble, a viewpoint, (via a 0.5 mile (0.8 km) detour) on the way to the summit.

This slightly more gentle trail passes the top of Roaring Brook Falls at the beginning of the hike and joins the Ridge Trail about (0.5 miles 0.8 km) from the Giant Mountain summit.

If you’re looking for a more challenging hike, the North and East trails are longer and traverse some of the more wild sections of the park. The North Trail runs from the trailhead on Route 9N and passes Owl’s Head lookout, which offers scenic views into the pristine valley below Giant Mountain.

This is the longest and possibly the toughest trail in the Giant Mountain Wilderness. It follows the scenic Rocky Peak Ridge and passes several other peaks and a beautiful high elevation pond before reaching the summit of Giant Mountain. There’s a campsite at the Marie Louis Pond, about 6.1 miles (9.8 km) down the trail if you want to make this an overnight hike.

There are two main approaches to the ridge, one via the East Trail and the other from the summit of Giant Mountain. The high point of Rocky Peak Ridge offers beautiful, 360-degree views.

Before reaching the summit of Giant, this trail passes by the Blueberry Cobbles lookout point, Bald Mountain, the Marie Louis Pond, and the high point of Rocky Peak Ridge.

This is one of the most popular approaches to Rocky Peak Ridge, allowing hikers to bag both 4,000 foot (1,219 m) peaks in the Giant Mountain Wilderness in one hike.

Hopkins Mountain has a rocky summit that offers great views of the surrounding area. There are four trails to the top.

This trail starts from the mossy cascade trailhead and crosses Crystal Brook. The first section is accessible only through an easement on private land, so don’t leave the trail in this area.

The Ranney Trail starts near the Rooster Comb Trailhead parking lot, at the end of a private lane accessed by a bridge over the East Branch of the Ausable River. It meets the Mossy Cascade Trail at the 1.8 mile (2.9 km) mark.

This trail, along with Spread Eagle Trail, is accessed through private lands on Beede Farm which are open to hikers but not motorized travel. Stagecoach Road leads 1.4 miles (2.3 km) from the Baxter Mountain parking lot to Phelps Brook road. The trailheads are at the end of this road. From here, it’s another 1.3 miles (2.1 km) to the summit of Hopkins Mountain.

To reach this trailhead, follow the same directions from the Baxter Mountain parking lot as those above for the Direct Trail. This trail is slightly longer and passes over Spread Eagle Mountain.

The Giant Mountain Wilderness is home to some of the best rock climbing opportunities in the Adirondacks for experienced climbers.

In particular, the wilderness contains a series of large multi-pitch cliffs called the Upper and Lower Washbowls, which are located to the southwest of the summit of Giant Mountain, overlooking Route 73.

The Upper Washbowl, is a particularly popular place to climb if you’re looking to climb some moderate multi-pitch routes. Arguably the most popular climbs on the Upper Washbowl are Heistation, Prelude to Overture, and Partition. Do note, however, that this climbing area is known for its loose rock, so take care when climbing and on your descent.

The other major climbing area in the Giant Mountain Wilderness is the Creature Wall, which is a smaller single pitch crag. Most of the climbs on the Creature Wall are rated between 5.5 and 5.10, but you’ll find a particularly great collection of 5.8s here for intermediate climbers to enjoy.

Climbers can access both the Upper Washbowl and the Creature Wall from the same approach trail that begins at the Giant Trailhead on Route 73. Keep in mind that this area is also popular among hikers, so you’ll need to arrive early in the morning if you have any hope of getting a parking spot on a summer weekend.

Looking for a place to stay near the Giant Mountain Wilderness? Here are some great small towns in the area full of Adirondack charm.

If you’re visiting the Giant Mountain Wilderness, the closest and most convenient place to stay would be the towns of Keene, Keene Valley, and St. Huberts, located to the west and northwest of the wilderness area.

While these are tiny hamlets of only about 1,000 people total, they’re a magnet for adventurous hikers heading to the High Peaks. Many of the most famous trails in the Adirondacks, including two of the trails over Giant Mountain, start right from town.

The area gets busy in the summer and fall, with trailheads filling up early in the morning. By staying in town, you can get a jump start on the crowds.

Located just northeast of the wilderness area on Route 9, Elizabethtown is a small mountain village that bills itself as the “Eastern Gateway to the Adirondack High Peaks.”

While this town is smaller than Keene Valley, it still provides great access to the whole High Peaks region, particularly the Giant Mountain Wilderness. There are also plenty of great attractions, including restaurants, a golf course, and antique shops. 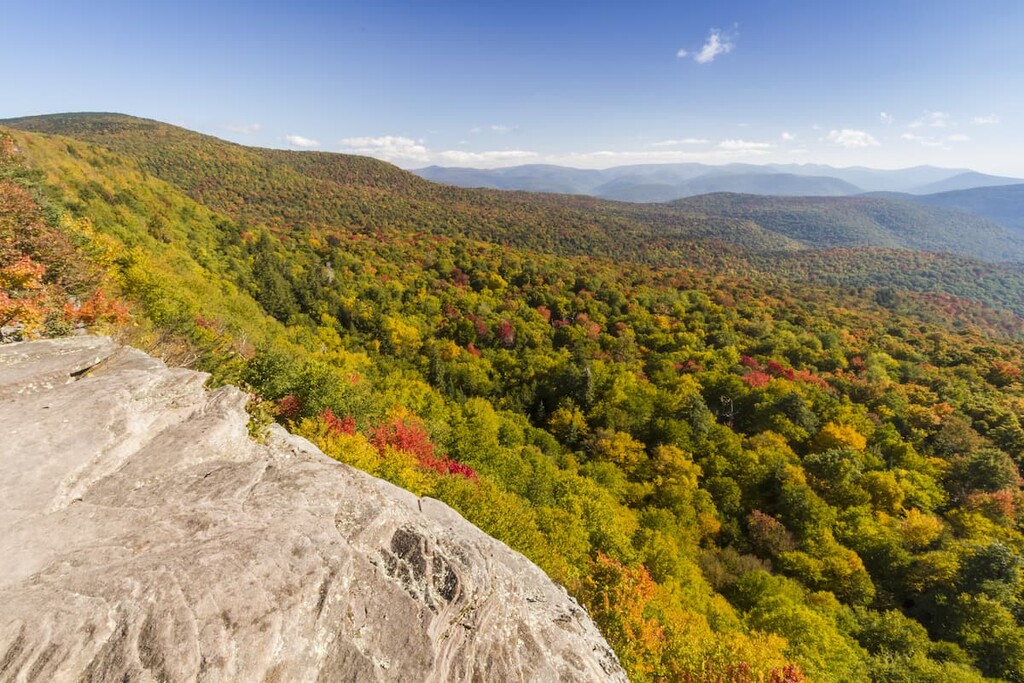 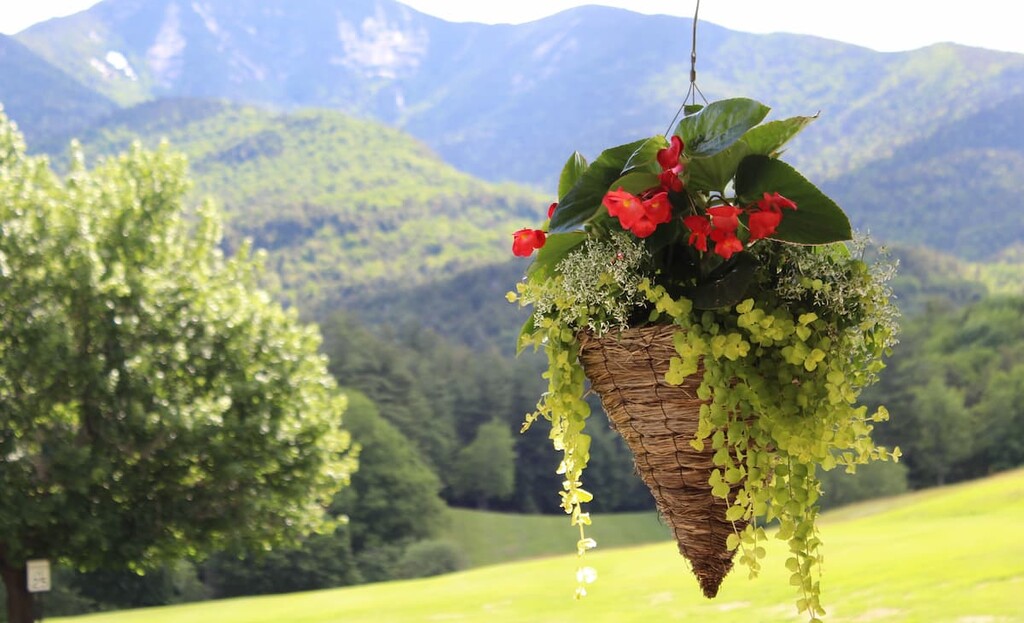 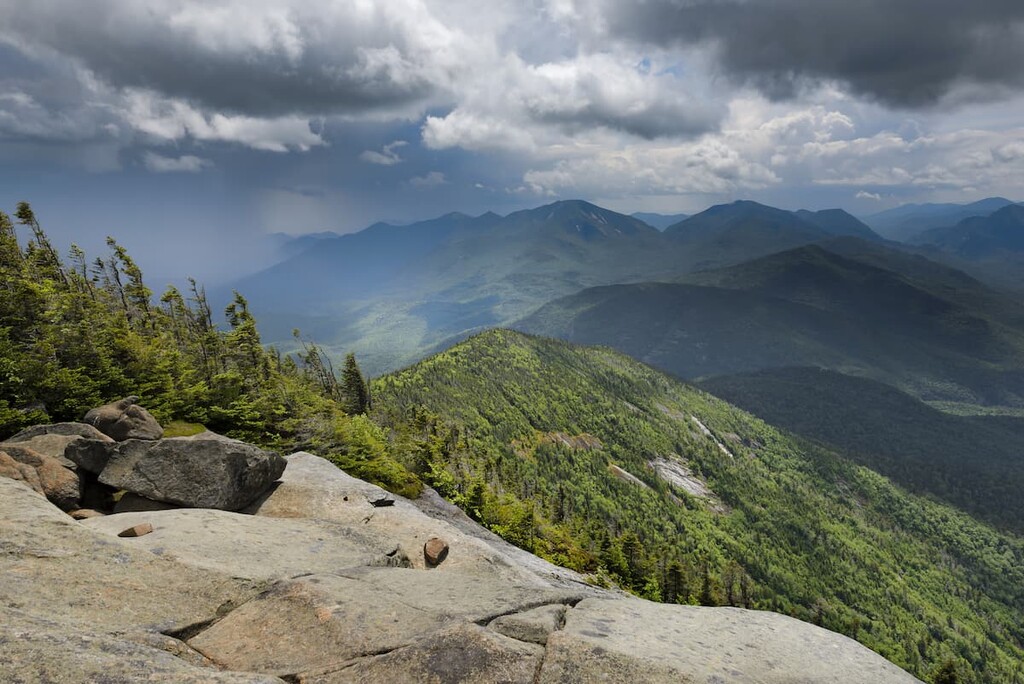 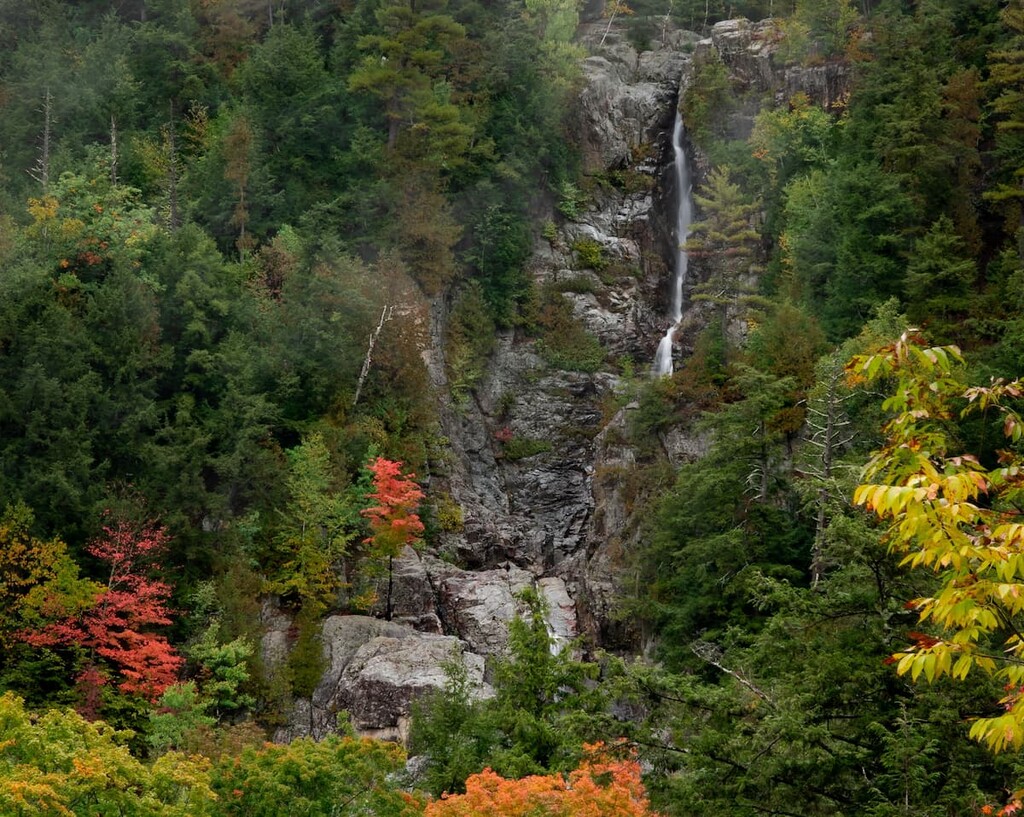 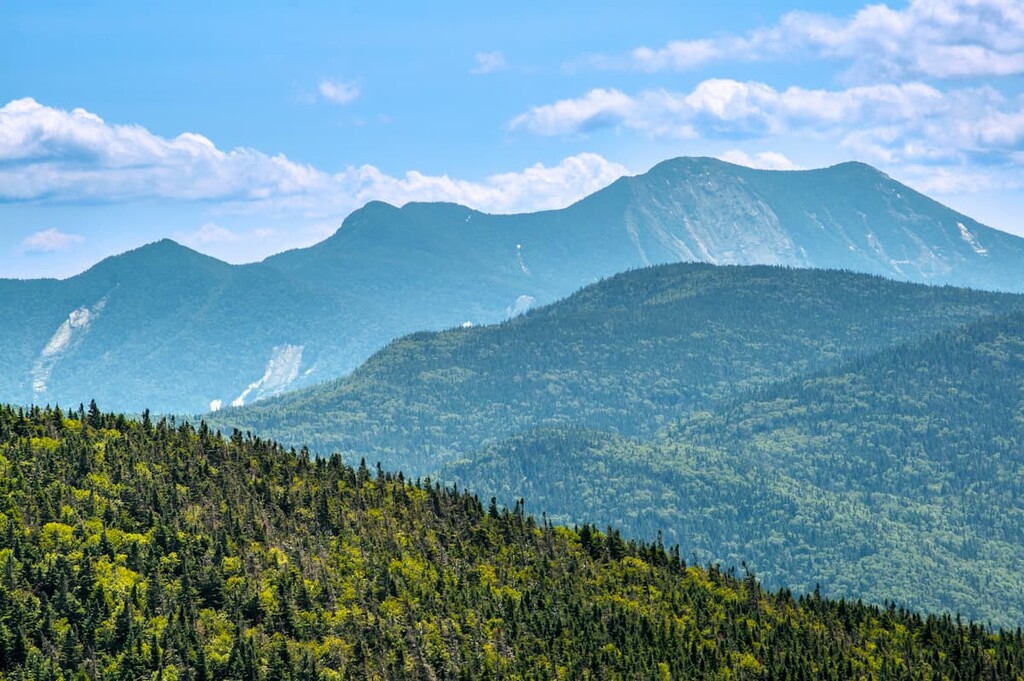 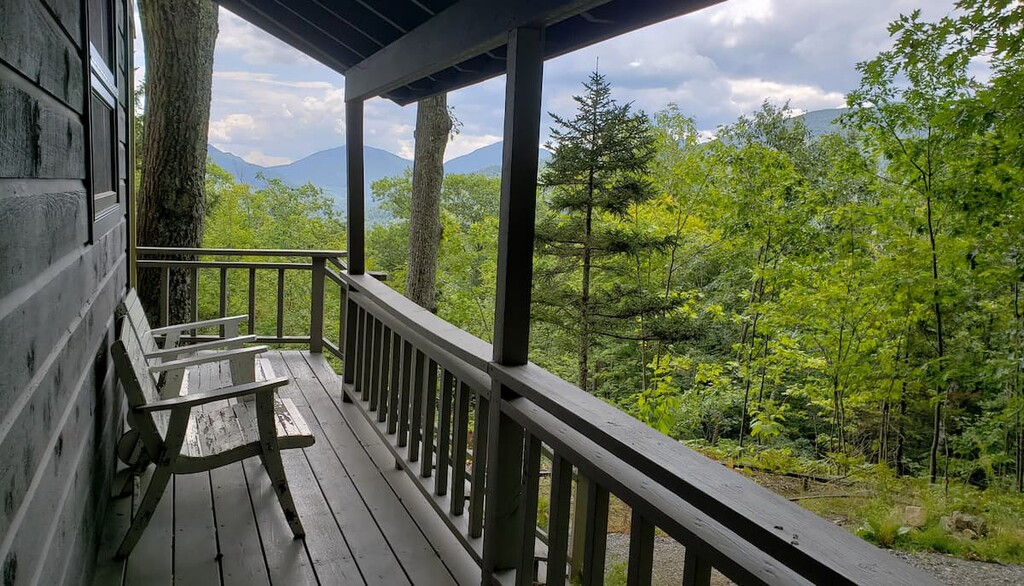 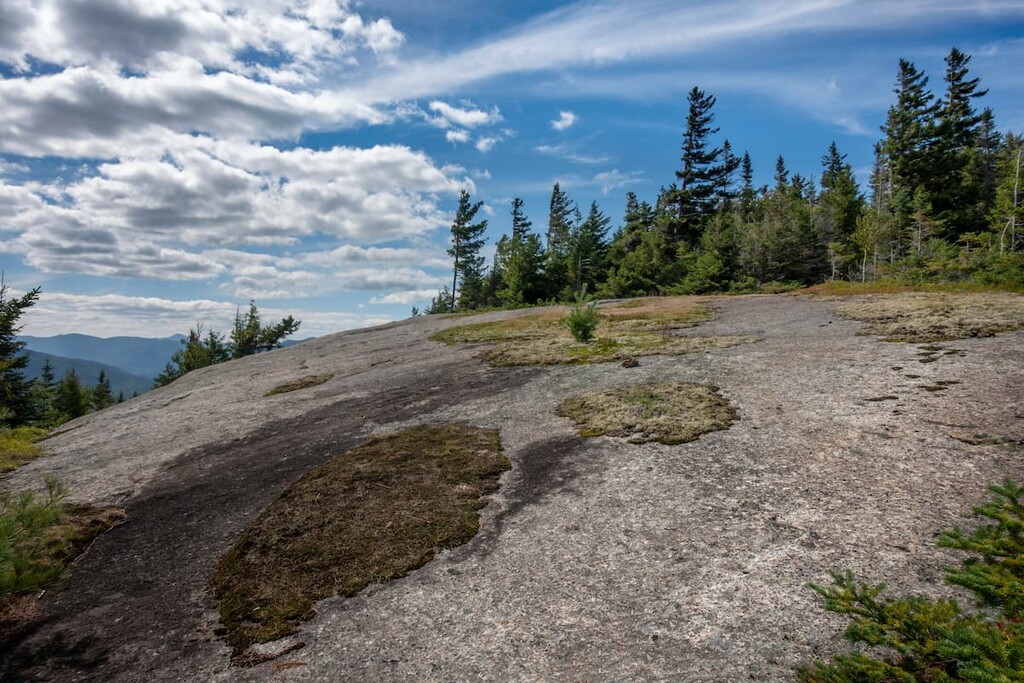