Located in the state’s panhandle region, the Clearwater Mountains are Idaho’s largest mountain range, with 477 named peaks, of which Rhodes Peak (7,906ft/2,410m) is the highest and Petty Mountain (7,276ft/2,218m) is the most prominent. A continuation of the northern US Rocky Mountains, the Clearwater Mountains cover the majority of North Central Idaho between the Salmon River and the Bitterroot Range, with a total land area of some 8,499 square miles (22,012 sq. km). 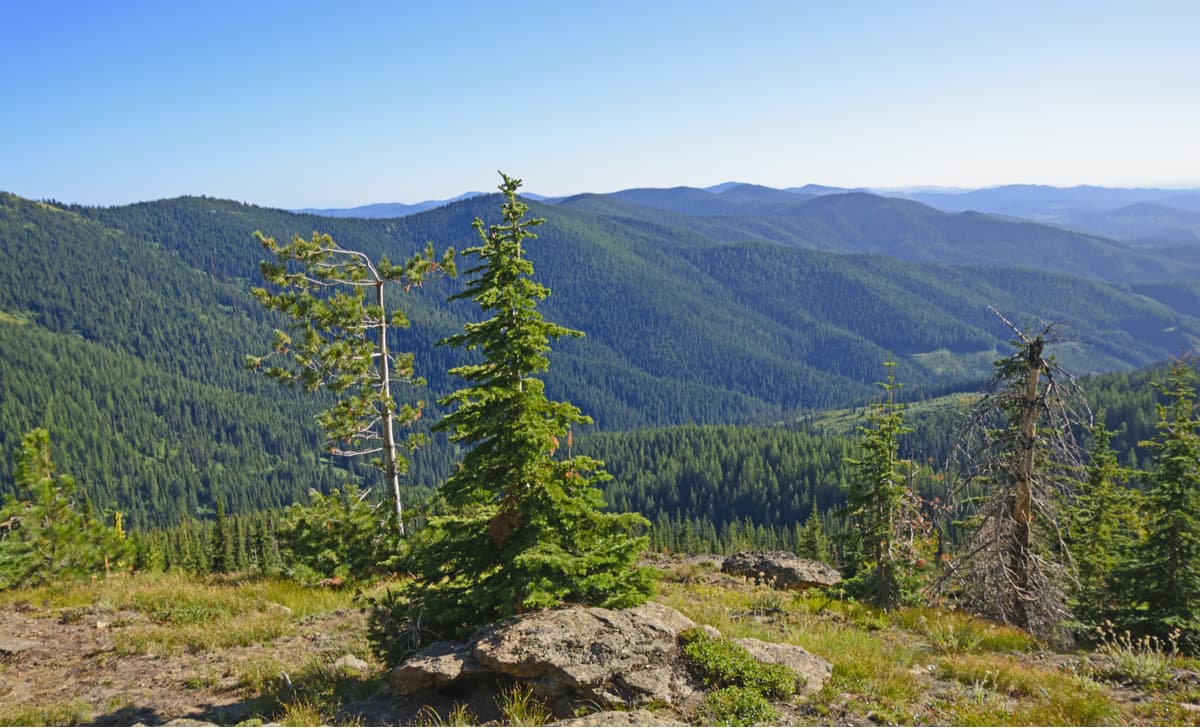 Geologically, the Clearwater Mountains are comprised mostly of Idaho Batholith granite, though there are some scattered deposits of sedimentary and metamorphic rock. The Idaho Batholith is a large area (some 15,400 square miles/39,885 sq. km) in Central Idaho made of granite that formed from magma that cooled under the Earth’s surface some 50 million years ago. As this magma cooled, it pushed its way upward, forming many of the mountains we see today in Northern and Central Idaho.

More recently, during the Pleistocene, extensive glaciation in the region carved out much of the Clearwater Mountain’s surface, giving us many of the features we see today, such as high alpine cirques and lake basins. We can see the results of this glaciation most clearly at the Mallard-Larkins and Selway Crags within the Clearwater Mountain range.

Within the Clearwater Mountains, outdoor enthusiasts can enjoy parts of two wilderness areas: the Selway Bitterroot Wilderness and the Gospel-Hump Wilderness, as well as the northernmost part of the Frank Church-River of No Return Wilderness. In these wilderness areas, hikers and climbers can experience the rugged beauty of the Clearwater Mountains and can hope to see some of the region’s abundant wildlife, including moose, black bear, cougar, bald eagles, and mountain goats.

These days, the Clearwater Mountain range is a relatively unknown region to people outside of the small mountain communities of Idaho, Montana, and Wyoming. However, if you’re seeking solitude and adventure, the Clearwater Mountains offer an abundance of hiking, climbing, and fishing opportunities to satisfy and thirst for exploration.

Perhaps the easiest way to categorize the major hiking areas in the Clearwater Mountains is by wilderness area. Here’s what adventure you can find in each of them:

Today, the Gospel Hump Wilderness Area is a land of contrasts, with gentle, rolling, heavily forested hills to the north that gradually rise up to the divide between the South Fork of the Clearwater River and the Salmon River. South of the divide, the Gospel Hump area becomes steep and rocky, making it the perfect place to see mountain goats and bighorn sheep during the summer months.

Within the Gospel Hump Wilderness Area, there are 26 named peaks, the highest of which is Buffalo Hump (8,904ft/2,714m) and the most prominent of which is North Pole (8,812ft/2,686m). There are a few somewhat maintained hiking trails within the wilderness area, including the Crystal Lake Trail and the Ten Mile Creek Trail. However, the vast majority of the wilderness area is rugged and remote, perfect for peak-bagging and backpacking in solitude.

The Selway Bitterroot Wilderness was formally protected in 1964 and contains 1,347,644 acres of rugged mountain scenery, split between Idaho and Montana. Part of the Wilderness area contains the Clearwater Mountains, where you can find rocky ridges, deep canyons, and plentiful coniferous forests featuring Ponderosa Pine and old-growth cedars.

The Selway-Bitterroot Wilderness has some 1,800 miles of trails within its boundaries, but if you’re really looking for an adventure, you can head out into the vast trailless portions of the region. Here, you can also see first hand the beauty of the Wild and Scenic Selway River as it flows down the mountains and moves ever closer towards the sea. There are 125 named mountains in the Selway-Bitterroot Wilderness, the highest and most prominent of which is Trapper Peak (10,157ft/3,096m), which is part of the nearby Bitterroot Mountain range.

Officially designated in 1980, the Frank Church-River of No Return Wilderness contains 2,358,940 acres of land, all of which is located in Idaho and managed by both the Bureau of Land Management and the US Forest Service. The northernmost part of the Frank Church-River of No Return Wilderness Area is located within the Clearwater Mountains, however, there are 146 named mountains in the area, the highest and most prominent of which is Mount McGuire (10,029ft/3,075m) of the Bitterroot Range.

Frank Church River of No Return Wilderness in central Idaho

As the largest single contiguous unit of the National Wilderness Preservation System in the United States outside of Alaska, the Frank Church-River of No Return Wilderness Area is home to raging rivers, deep canyons, and plenty of rugged mountain scenery. The Main Salmon River and the Middle Fork of the Salmon rush through the wilderness area, carving out a canyon some 6,300 feet (1,920m) deep - deeper than the famous Grand Canyon of the Colorado - giving it the nickname of “the River of No Return”.

Within the wilderness area, there are 296 maintained trails, which connect over 2,600 miles (4,184km) of paths from 66 trailheads, so whether you’re looking for an on-trail or a remote adventure, there’s something for everyone within the Frank Church-River of No Return Wilderness Area.

Middle Fork of the Salmon River in the Idaho Mountains

The vast majority of the state of Idaho and neighboring Montana and Wyoming is remote, rugged terrain. Outside of a few major cities, these three states are sparsely populated and travel can be tricky to arrange if you don’t have a car. However, if you can fly into one of the area’s regional airports and rent a car or drive in from a nearby state, getting to a trailhead in the Clearwater Mountains shouldn’t be too difficult. If you’re looking for a place to start your adventure in the Clearwater Mountains, check out these options:

Boise is the capital of the state of Idaho and is home to some 200,000 people, making it the state’s most populous city. Although it’s quite a drive from Boise into the Clearwater Mountains, the city is home to the state’s largest airport, which makes it a good location to start your journey if you need to fly to the region.

Located just across the border from the Clearwater Mountains, Missoula is a college town and the second-largest city in Montana, after Billings. Missoula is home to some 75,000 people and is often considered a destination hub for the region’s nearby mountain ranges. Although it’s a relatively small city, the Missoula airport is serviced by a number of airlines that offer connections from Los Angeles, Portland, Seattle, Las Vegas, Dallas, Minneapolis, Denver, and Salt Lake City, to name a few, so it’s relatively easy to get to Missoula from elsewhere in the United States. 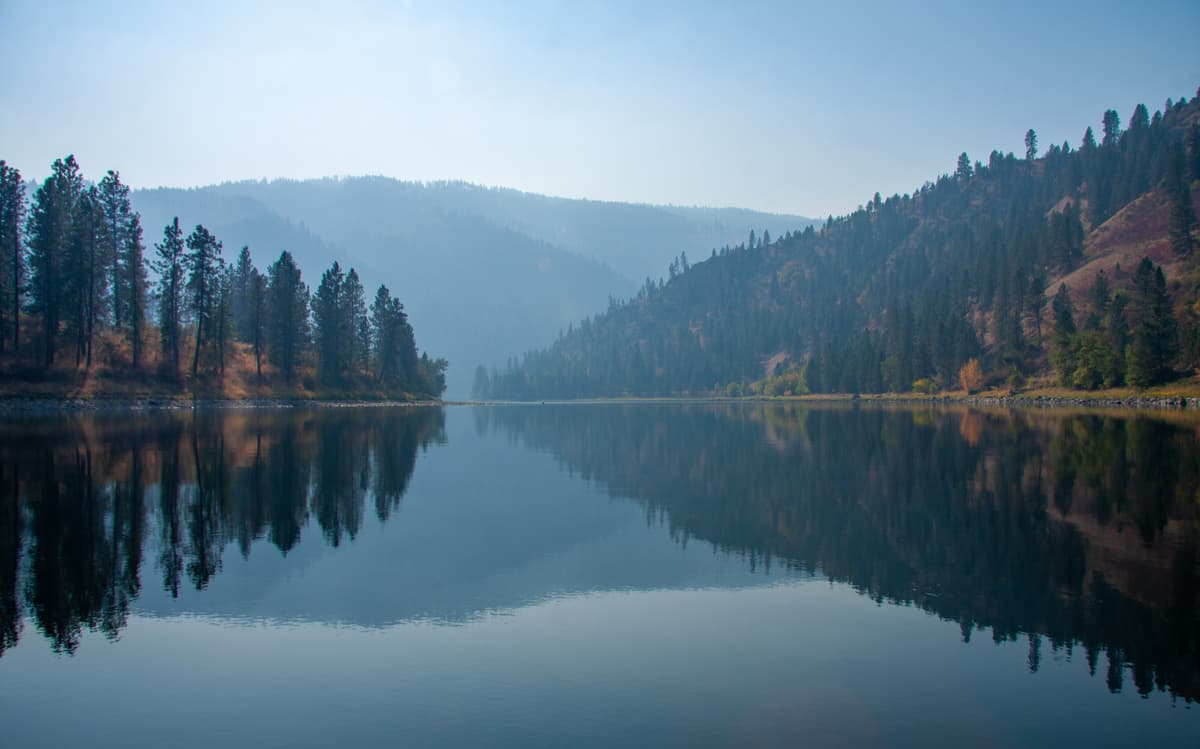 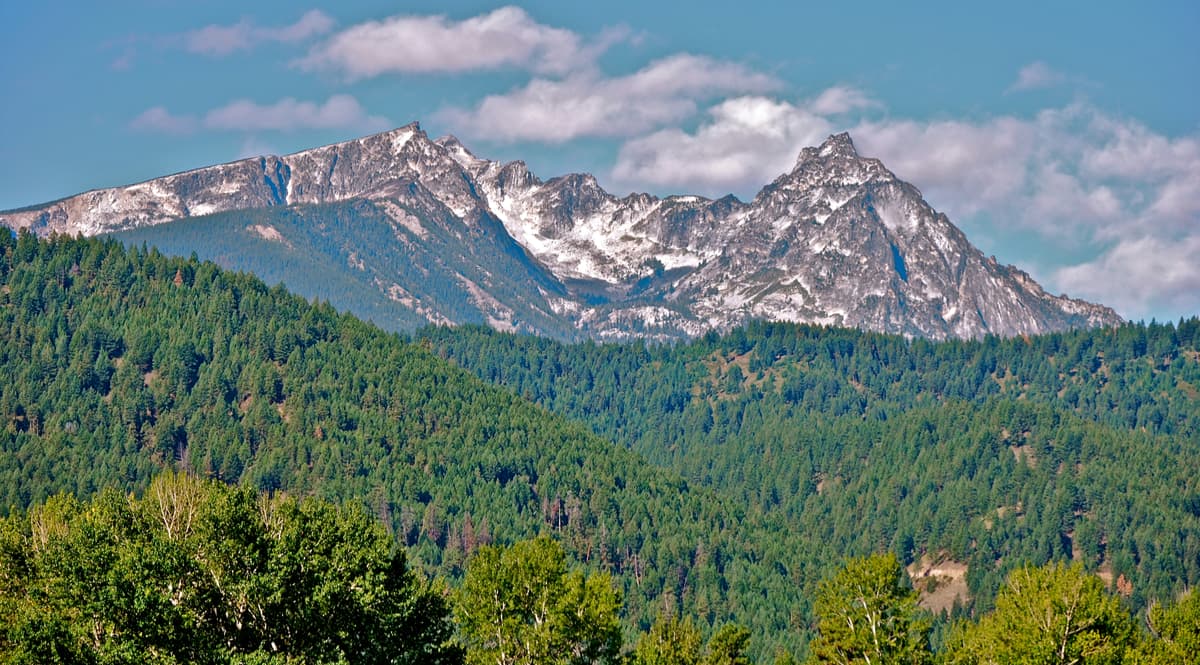 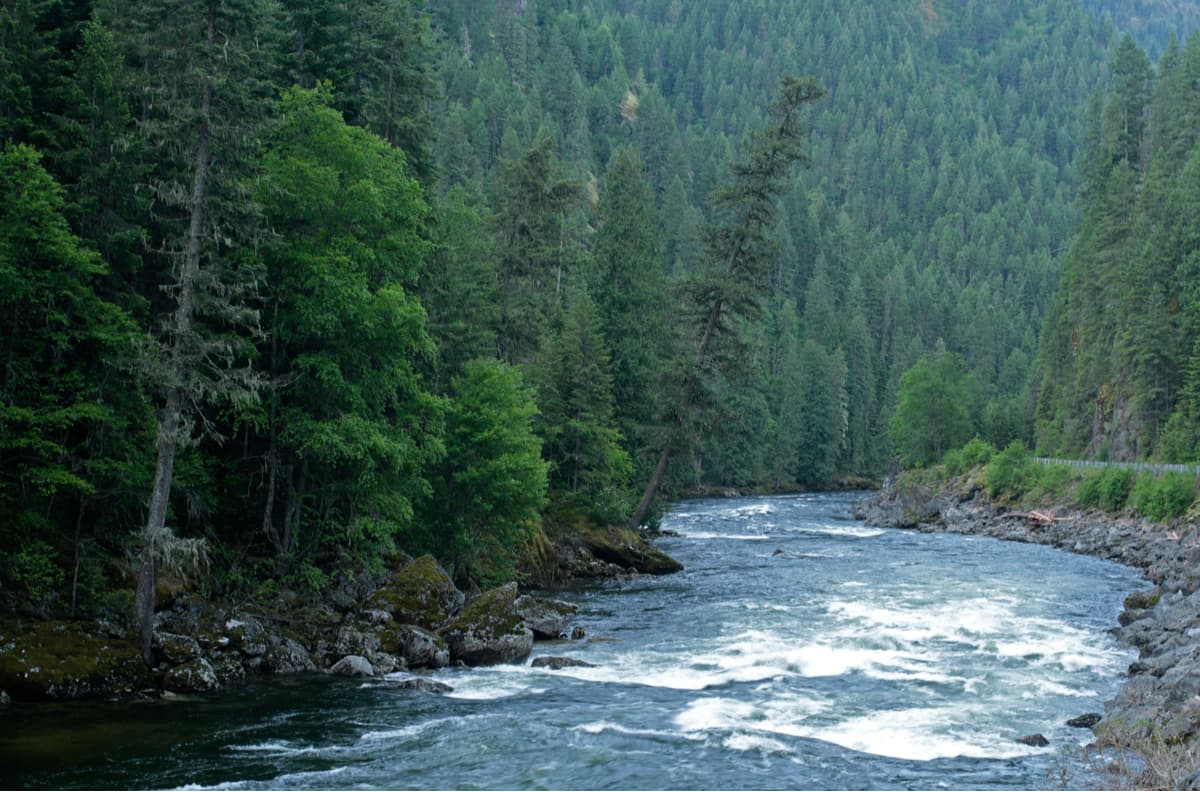 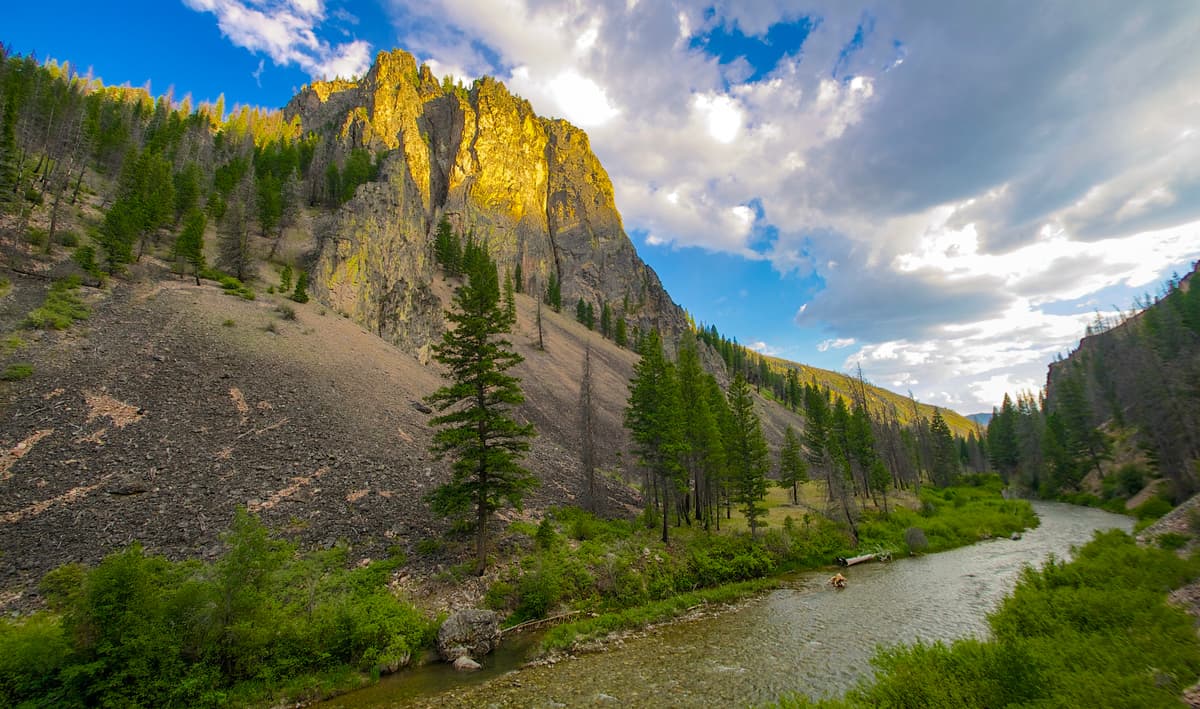 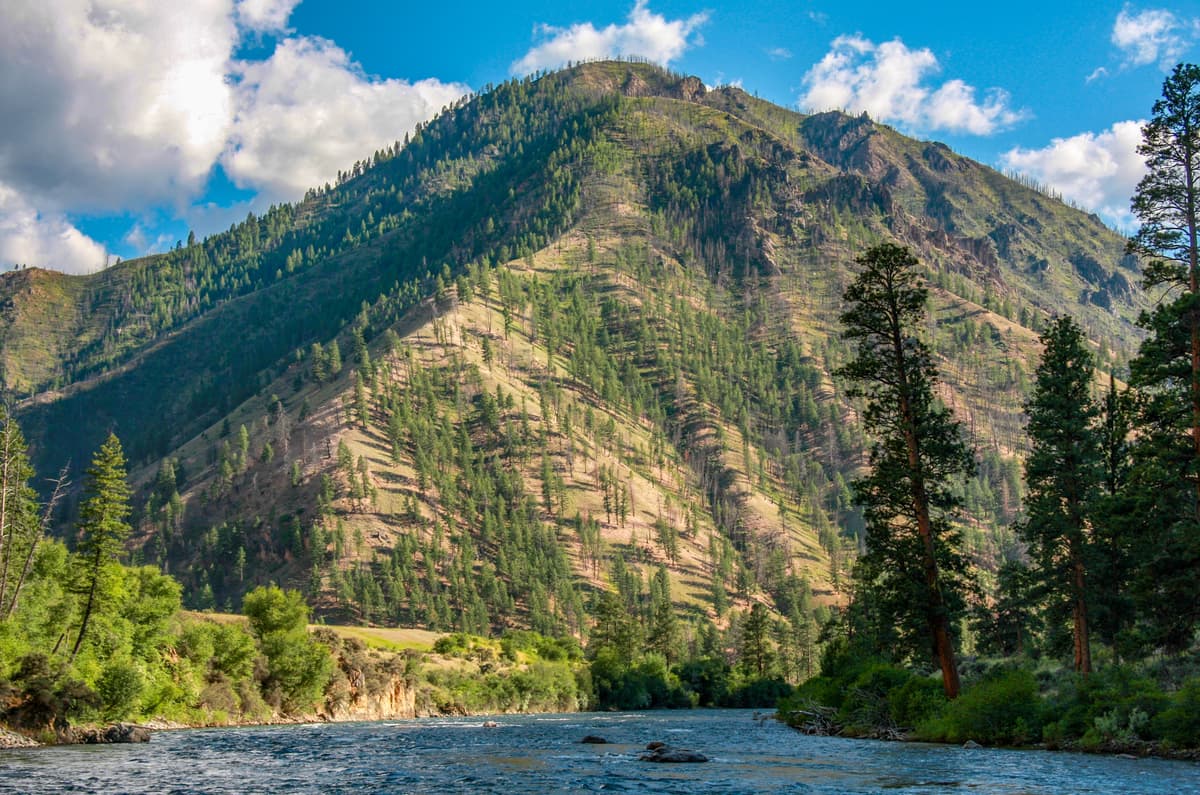