Accessible by only water and air, the Admiralty Island National Monument protects 956,155 acres (386,942 ha) of rugged coastline, old growth forest, lofty peaks, and expansive alpine tundra on Admiralty Island in the southeastern part of the US state of Alaska. There are 19 named mountains in the monument, the highest and most prominent of which is Eagle Peak (4,511 ft/1,384 m). 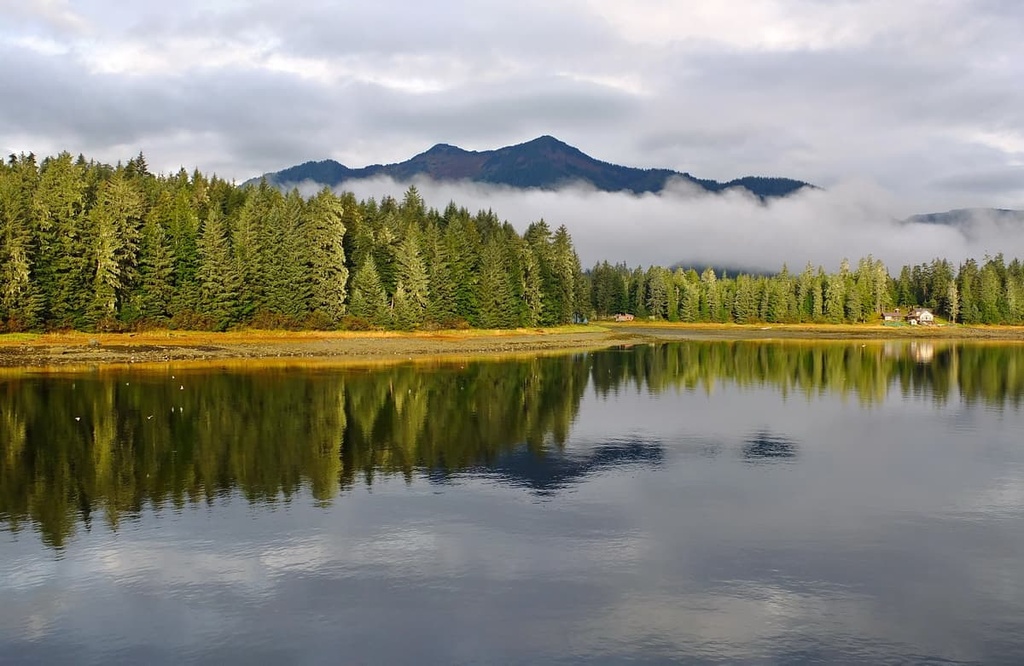 The Alexander Archipelago lies off the coast of southeastern Alaska in what is colloquially known as the Alaska panhandle. It contains over 1,000 islands, many of which are situated within the 16.7-million-acre (6.8 million ha) Tongass National Forest.

The Alaska Panhandle is bordered to the east by the Canadian province of British Columbia. In many areas, the international border runs along the crest of the Boundary Ranges of the Coast Mountains.

Three of the islands protected by Tongass National Forest—Admiralty Island, Baranof Island, and Chichagof Island—are informally referred to as the ABC islands. Though human settlements are minimal on the islands, the ABC islands are among the most frequently visited places in the Alexander Archipelago.

Admiralty Island, which is home to the Admiralty Island National Monument, is about 96 miles (154km) long, northeast to south, and roughly 30 miles (48 km) wide at its broadest point. The island is dissected by the Seymour Canal and bounded by Stephens Passage, Frederick Sound, Chatham Strait, and Lynn Canal.

Despite being just 15 miles (24 km) from mainland Alaska, Admiralty Island is incredibly remote and isolated. Approximately 90 percent of the Admiralty Island National Monument is designated as the Kootznoowoo Wilderness, an area intentionally managed with the preservation of undeveloped ecosystems in mind.

The Alaska panhandle has a lengthy and complex geologic history that has been shaped by ice and plate tectonics. Admiralty Island lies primarily within the Wrangellia/Alexander geologic terrane and the Gravina Belt.

Virtually all of southeast Alaska, including the Alexander Archipelago, was covered by ice during the Pleistocene. Geologists estimate that Admiralty Island was glaciated to an elevation of roughly 3,000 feet (914 m). Fossilized impressions of deciduous leaves tell a tale of a diverse deciduous forest that thrived on the island prior to the Pleistocene.

As the ice retreated and sea levels rose, the islands of the Alexander Archipelago became increasingly fragmented. Roughly 700 to 200 years ago, during another period of glacial advance that’s commonly referred to as the Little Ice Age, the glaciers further shaped and altered the southeast Alaska landscape into what we see today.

Admiralty Island is one of the largest unspoiled coastal island ecosystems in North America. Although it is geographically separated from mainland Alaska, the island is dominated by dense old-growth forests of Sitka spruce, western redcedar, and western hemlock. Numerous lakes, rivers, and open areas of muskeg break up the island’s expansive coastal rainforest.

Most notably, Admiralty Island is home to the highest density of brown bears and nesting bald eagles in the world. An estimated 1,600 brown bears inhabit the island, outnumbering human inhabitants nearly three to one.

While bears outnumber people on Admiralty Island, bald eagles outnumber bears. More than 2,500 bald eagles are estimated to live on the island, giving it one of the world’s highest concentrations of bald eagles.

Admiralty Island has been home to the Tlingit people for roughly 10,000 years. The island is known by the Tlingit as Xootsnoowú, or Kootznoowoo, which translates roughly to "Fortress of the Bear.” Approximately 600 members of the Tlingit Nation live on Admiralty Island today, mostly in the community of Angoon.

The first documented contact between Europeans and the Tlingit on Admiralty Island occurred as early as 1794, when Lt. Whidbey circumnavigated the Island. Between the eighteenth century and mid-nineteenth century, the island and surrounding archipelago saw an increase in visitation and exploitation by European fur traders, whalers, miners, and prospectors.

In 1899, some of the nation’s most prominent conservationists, photographs, naturalists, and scientists participated in the Harriman Alaska Expedition. Though the expedition didn’t immediately slow expansion and mining in Alaska, it initiated preservation efforts and promoted ecological research in southeast Alaska.

In 1902, the Alexander Archipelago Forest Reserve, later renamed to the Tongass National Forest, was established. However, large parts of the forest, including Admiralty Island, had already been slated for logging. By 1964, the United States Forest Services had established plans to clear-cut more than 90 percent of the commercial forest land in the region.

For the next two decades, local hunters, natives, conservationists, environmentalists, and politicians intensified their efforts to preserve wilderness lands in Tongass National Forest.

The Admiralty Island National Monument is almost entirely undeveloped wilderness. However, those willing to spend some time off the beaten path will find that Admiralty Island is the perfect getaway for hiking, fishing, wildlife viewing, and water recreation.

These are some of the most popular attractions in the Admiralty Island National Monument:

The Cross Admiralty Canoe Route is a 32-mile (51.5 km) water trail that links seven mountain lakes, trails, and portages between Angoon and Seymour Canal. Though the modern route was constructed by the Civilian Conservation Corps in the 1930s, Indigenous communities have used these waterways to hunt, fish, and trade for thousands of years.

A short trail along a rocky beach takes visitors to a scenic overlook where you can watch bears as they fish in the creek and forage along the shoreline.

There are 14 cabins scattered across the Admiralty Island National Monument that are available for rent. These cabins include:

Each of these cabins is unique and they each offer different amenities for visitors. For the most part, the cabins are rustic and they don’t have electricity. However, many have some sort of water source, even if that’s a nearby stream. Be sure to double-check any available amenities at your cabin before you leave for your trip.

All of the cabins require advanced reservations that you can make on Recreation.gov. The cabins are particularly popular in the summer months, but try to make your reservations as early as possible to avoid disappointment.

There are a handful of developed roads and accommodations on Admiralty Island. However, visitors can only travel to the island via boat, floatplane, or kayak and the bulk of the island is undeveloped.

If you’re traveling to the Admiralty Island National Monument, these are a few of the nearby cities to check out:

Located at the entrance to Mitchell Bay, Angoon is the only major community on Admiralty Island. Angoon has just 450 permanent residents, most of which are Tlingit.

However, despite its modest size and population, Angoon is home to several lodges, including Favorite Bay Lodge and Whaler’s Cove Lodge. Access to the community is limited to float planes and the Alaska Marine Highway ferry.

Juneau, the capital of Alaska, is located in the Alaskan panhandle, making it the ideal basecamp for visitors to Admiralty Island. Several outfitters in the city coordinate private plane trips and tours to the island, allowing visitors to experience popular attractions like Pack Creek.

Juneau is also located in one of the largest wilderness areas in the US and is a popular hub for outdoor recreation. Visitors to Juneau can take guided tours to the Juneau Icefield, explore Mendenhall Glacier, plan an excursion to Glacier Bay National Park, or take a whale watching tour of the northern Inside Passage. 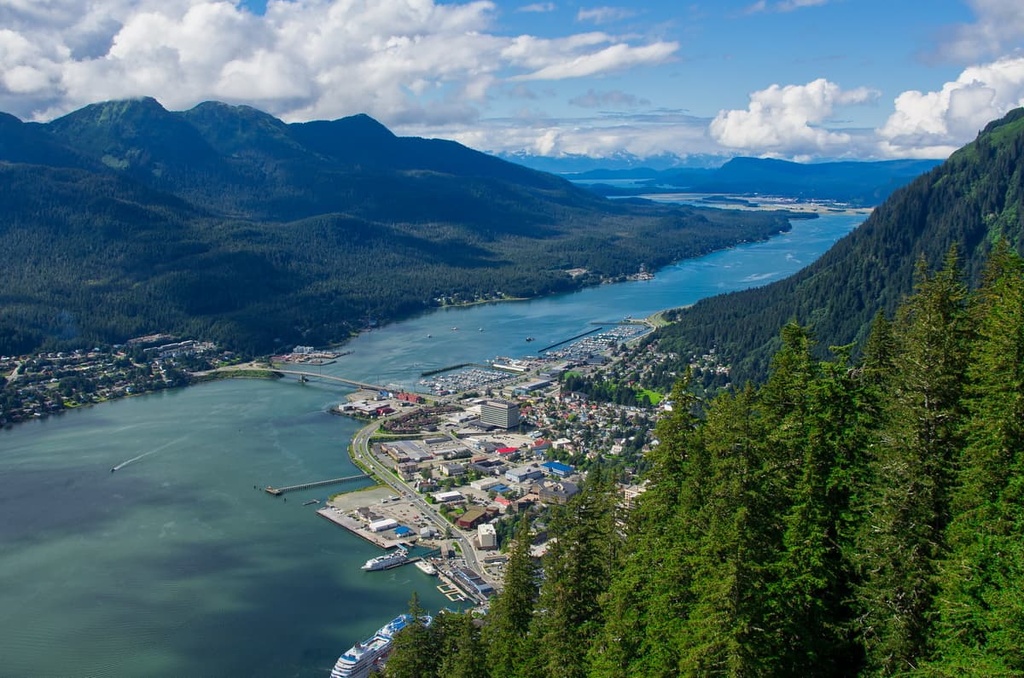 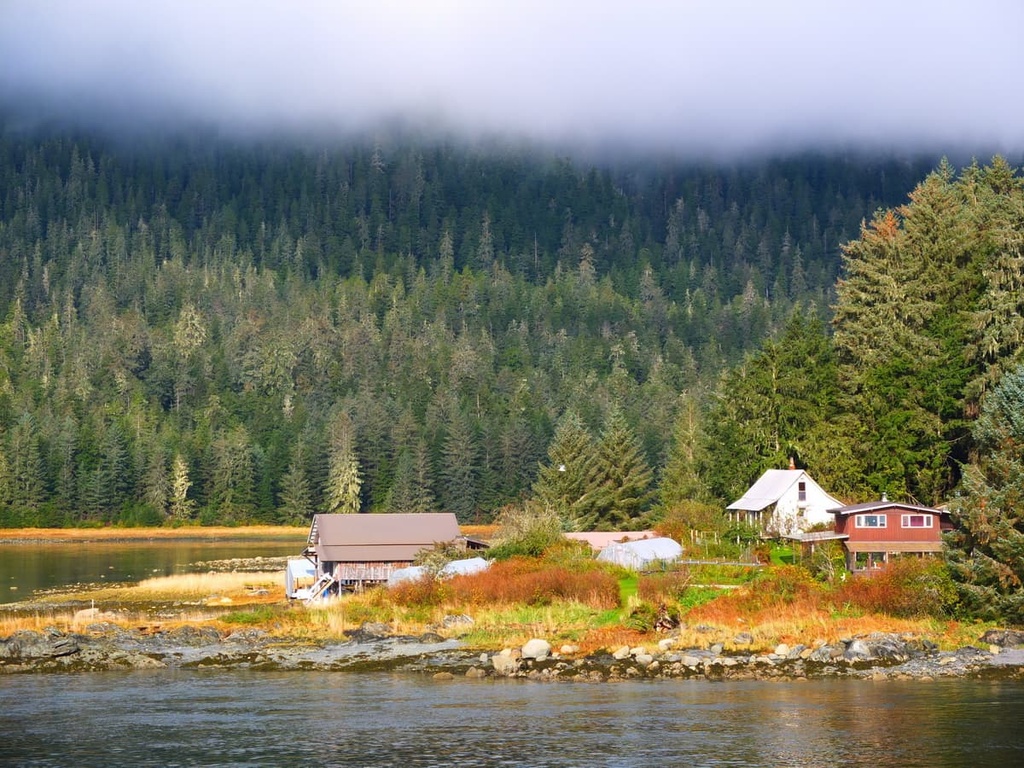 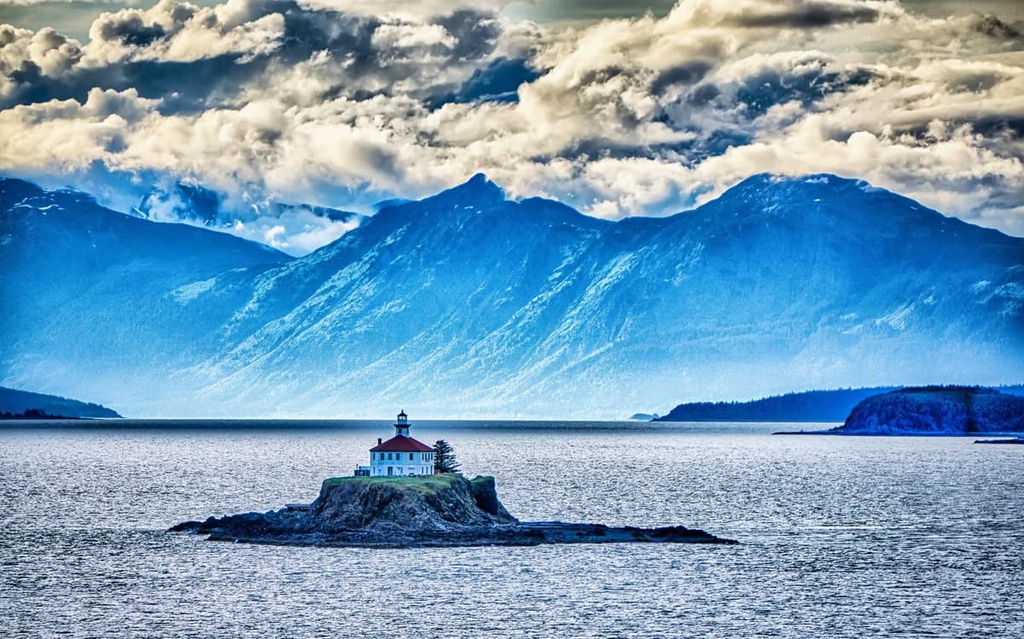 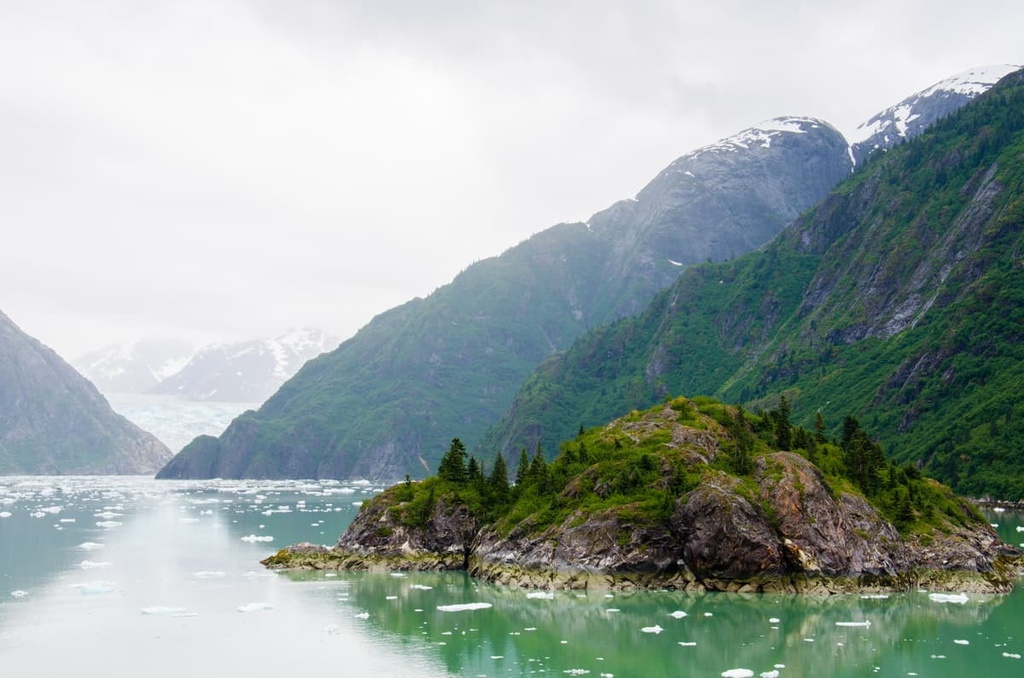 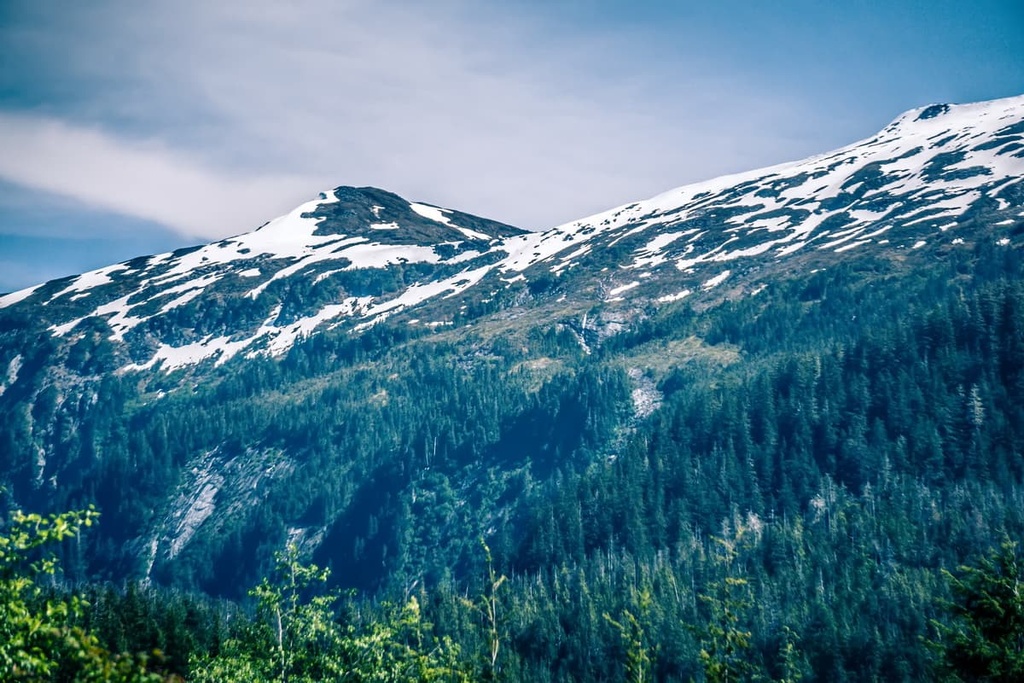 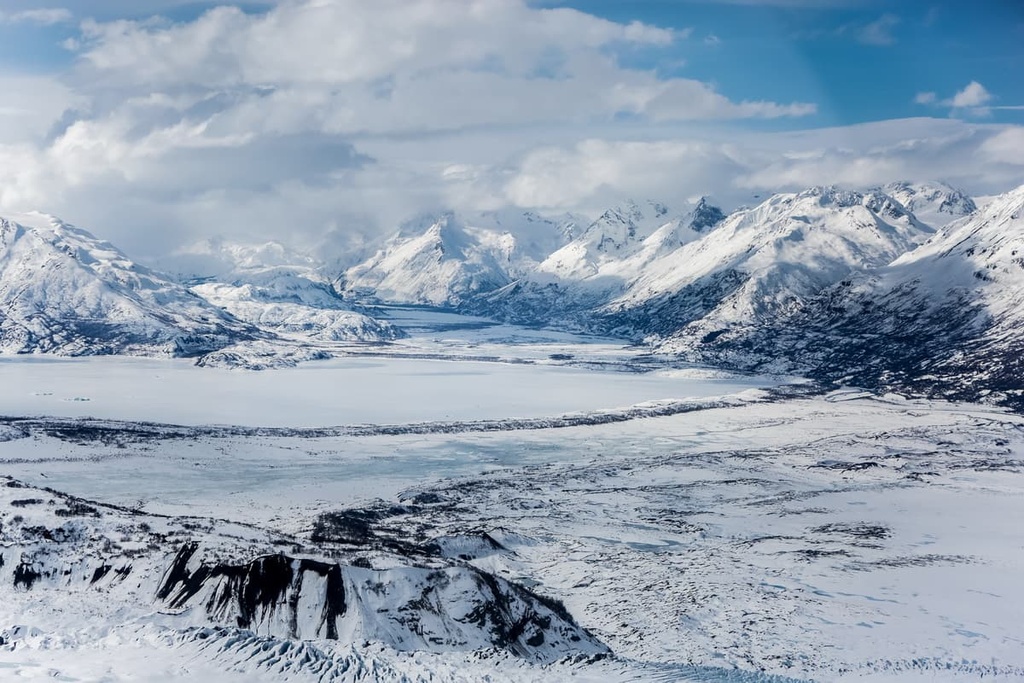 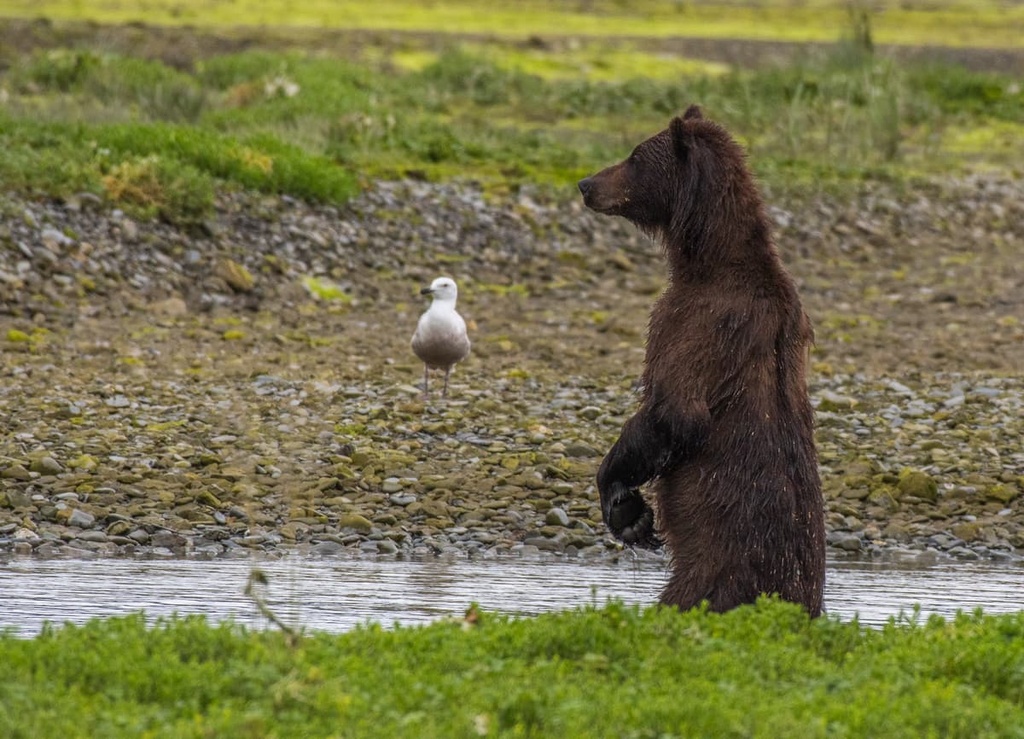