Santa Cruz is a province located in southern Argentina. The province is part of Patagonia and is known for its mountains, glaciers, and protected regions for outdoor recreation. Santa Cruz Province contains 838 named peaks. The highest and most prominent peak is Monte San Lorenzo o Cochrane, standing at 3,706 m (12,159 ft) in elevation with 3,319 m (10,889 ft) of prominence. 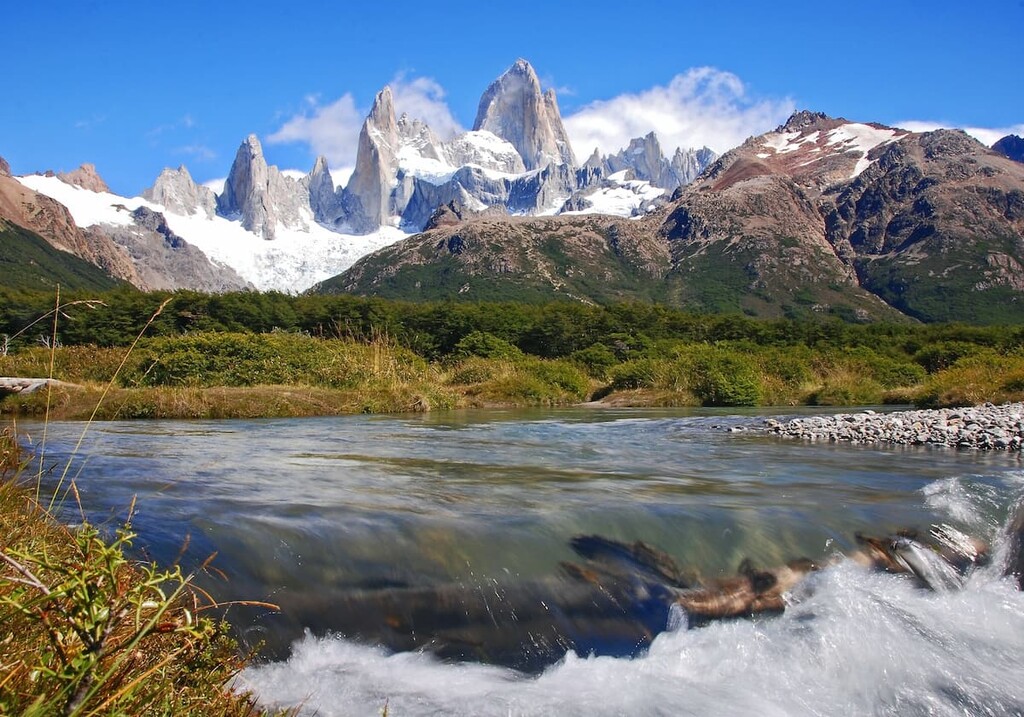 The western and southern borders of the province share a border with Chile while the eastern coast is marked by the Atlantic Ocean. Meanwhile, the province is bordered to the north by the province of Chubut. Santa Cruz province also technically shares a southern maritime border with Tierra del Fuego.

The province is often defined by two separate regions: the Andes are situated in the western stretches of the province while the central and eastern regions are dominated by vast plateaus.

Indeed, the western side of Santa Cruz is home to some of the tallest peaks in the entire Andes, as well as the Southern Patagonian Ice Field. The ice field is the second largest contiguous ice field in the world outside of the polar regions and it is a defining feature of the province.

The glaciers in the western region of the province are some of its most iconic features. A majority of the major glaciers in Santa Cruz are found within Los Glaciares National Park (Parque Nacional Los Glaciares), with the most prominent glacier being Perito Moreno Glacier.

Besides the rugged peaks of the Andes, Santa Cruz is also home to numerous lakes. Some of the most notable are Argentino Lake, Buenos Aires Lake, Viedma Lake, Cardiel Lake, and San Martín Lake. Argentino Lake is also known for being the largest freshwater lake in the entire country.

Santa Cruz encompasses the southern stretches of the Andes, along with their eastern plateaus. The Andes are a defining feature of both Santa Cruz Province and western South America. As a result, they have heavily influenced the landscape of the entire province.

The Andes began forming around 20 million years ago when the oceanic crust was subducted beneath the South American plate. Over the course of millions of years, the range began forming as it continued to be moved eastward.

Today the oceanic sediment can be found throughout the Andes as the peaks continue to rise a few millimeters each year. While the land immediately to the east of the range is home to higher amounts of biodiversity, immense plateaus dominate the eastern stretches of the Santa Cruz province.

The plateaus consist of basalt rock and date back to various time periods. Older plateaus are found at higher elevations in the province. The most recent lava plateaus and outcrops can be found at lower elevations.

Amidst the numerous basalt plateaus, the eastern region of Santa Cruz is also home to deep depressions that have been eroded over the course of millions of years. In these depressions are found numerous high salinity lakes including Laguna del Carbón at 105 meters (345 feet) below sea level.

Santa Cruz is home to a fantastic amount of biodiversity as it stretches from the Andes to the Atlantic Ocean. Despite being heavily glaciated, the western region of the province is still home to an abundance of both flora and fauna.

The region surrounding Los Glaciares National Park is home to forested hillsides with trees consisting primarily of coihue, Patagonian cypress, ulmo, Chilean hazel, and podocarp. The eastern stretches of the province are home to various grasses and coastal shrubs who thrive despite the minimal amount of rainfall.

Eastern Santa Cruz is home to various species of penguins. The fourth largest colony of Magellanic penguins can be found along the province’s eastern shores. Amidst the penguins also lie populations of cormorants, sea lions, baleen whales, and herds of guanacos.

Indigenous peoples have inhabited the Santa Cruz region for thousands of years. The Tehuelches have lived with the land long before the arrival of Spanish colonizers. In Cueva de las Manos, within the Santa Cruz province, lies art made by the Toldense people which dates back to around 10,000 years ago.

The Tehuelche people were hunters and gatherers who migrated throughout the land depending on the seasons. Their movement closely followed that of the guanacos, helping ensure their survival throughout the cold winter months.

The Spanish arrived in 1520 when Ferdinand Magellan came to what is now known as San Julián Bay. Population began to grow in the region in the eighteenth century despite resistance from the indigenous populations.

Further explorations by Europeans took place from 1825 to 1836. Charles Darwin led many of these explorations documenting the unique landscape. The 1870s brought the establishment of the Patagonia region.

The beginning of the twentieth century brought a large number of Europeans to the region, most of whom came from Britain, Spain, and Germany. The major parks and preserves of the province were established throughout the past 100 years, starting with Los Glaciares National Park in 1937.

To this day there is still a section of border between Chile and Argentina that is up for dispute. A vast section of the Southern Patagonian Ice Field that both countries claim as their own. This region spans from Monte Fitz Roy to Cerro Murallón.

Santa Cruz Province is home to numerous recreation destinations and trails. Here are some of the best hiking areas in the province to consider:

Perhaps the most iconic destination in the entire province is Los Glaciares National Park. Massive icecaps dominate the landscape of the park, as do 47 different glaciers. Another defining feature of the park is Lake Argentino, the largest freshwater lake in the country.

While the entire park is visited by thousands of tourists annually, some of the most well-known trails include Laguna de Los Tres, Perito Moreno Glacier Trail, Al Fitz Roy Trail, and Lake Capri.

A majority of the hiking routes start near the village of El Chaltén. Popular trails include Cerro Torre Lookout, Condors and Eagles Lookout, and Loma del Pliegue Tumbado. Other trails can be found near Lago del Desierto.

Situated along the east coast of the Santa Cruz province lies Monte León National Park. The park was established to help preserve the biodiversity of the region as well as protect numerous paleontological sites.

There are various short walking paths throughout the park allowing visitors to witness the Patagonian steppe and unique coastline. While beach access is allowed in some sections, the beach is primarily off limits to protect the fauna.

Looking for a place to stay in Santa Cruz? Here are some of the best cities and villages to check out in the region:

Río Gallegos is the capital of the Santa Cruz province as well as the most populated city in the region. The city has a population of around 100,000 people and it is located in southeastern Santa Cruz.

Besides being the largest city in southern Argentina, Río Gallegos acts as a gateway to the region since it is home to a major airport. Within and outside the city limits, Río Gallegos is home to a vast array of wildlife and is known for its extensive bird populations.

Situated on Lake Argentino, El Calafate is one of the most visited cities in the entire province. Whether tourists are looking for a short day trip to a national park, or are beginning an expedition up one of the tallest peaks in southern Argentina, El Calafate is the place to be. 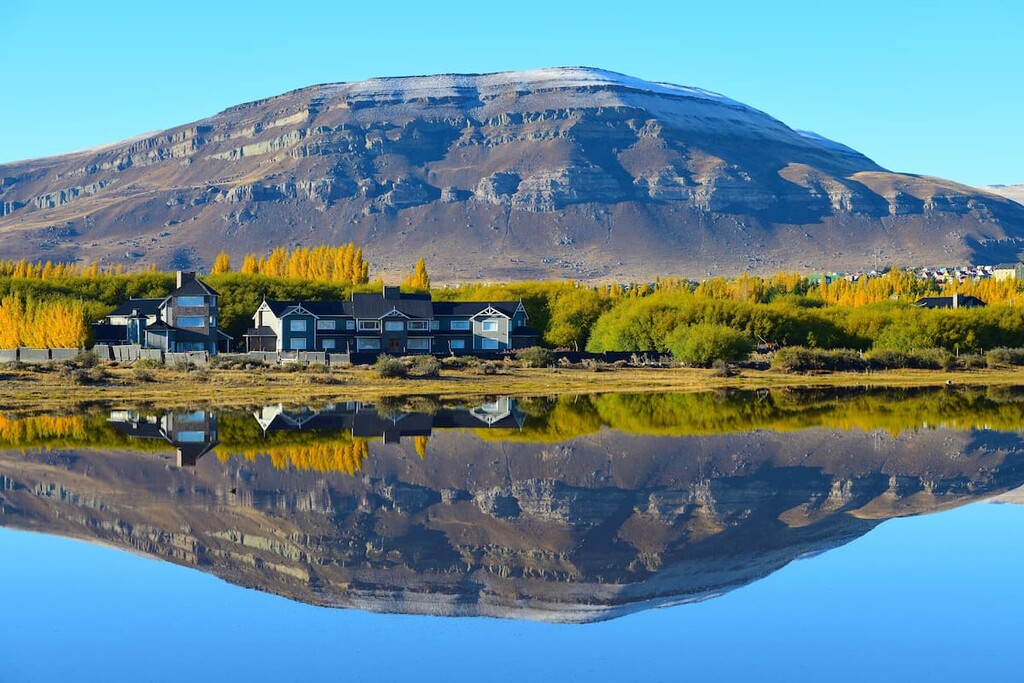 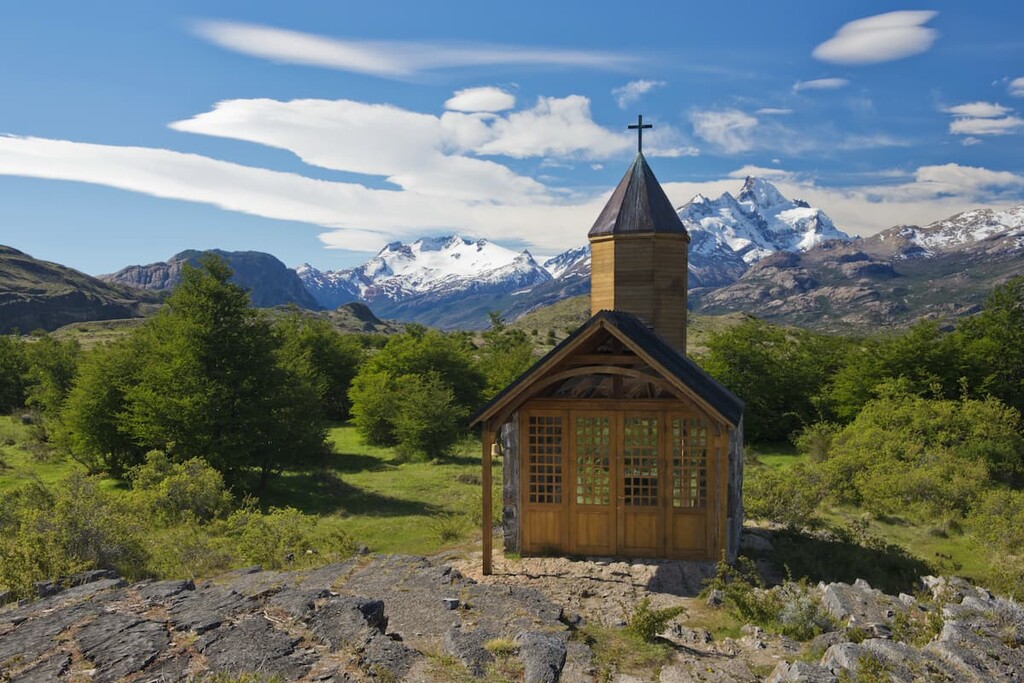 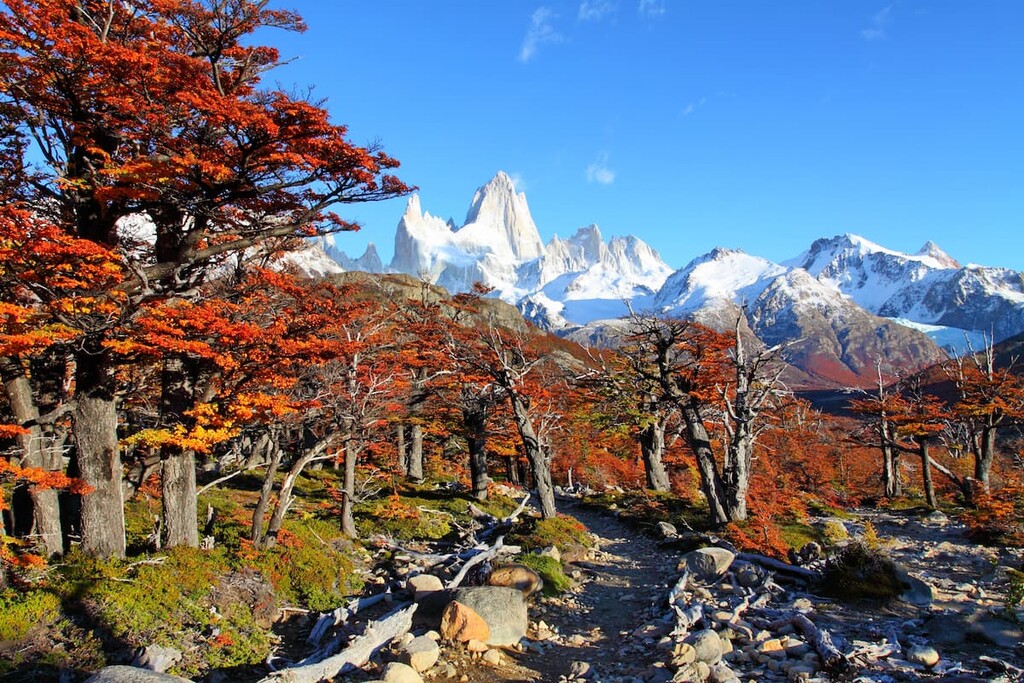 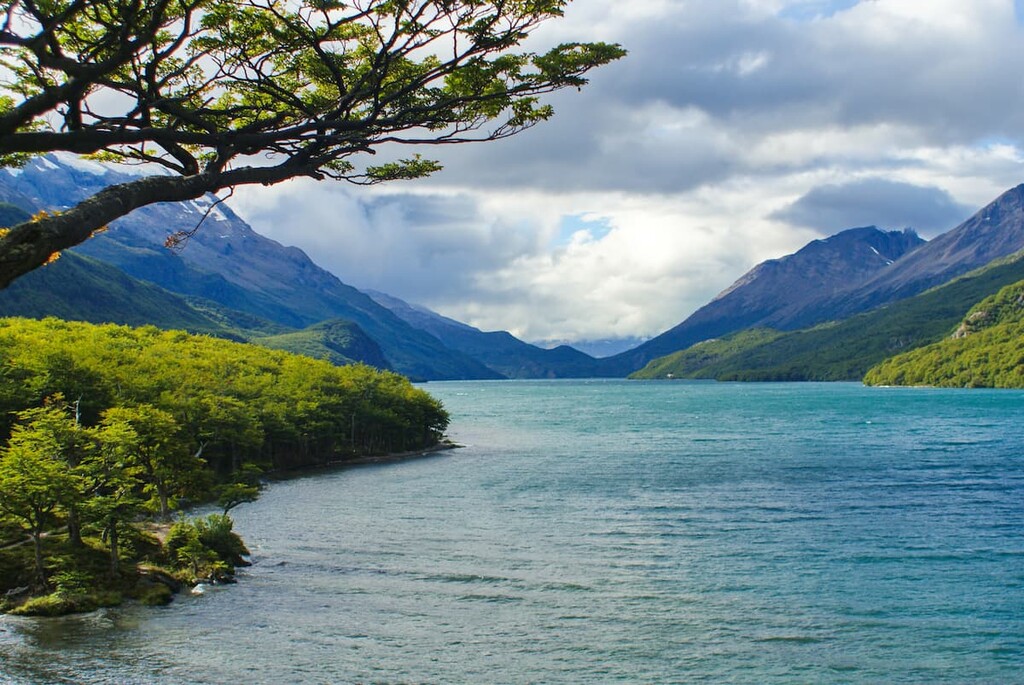 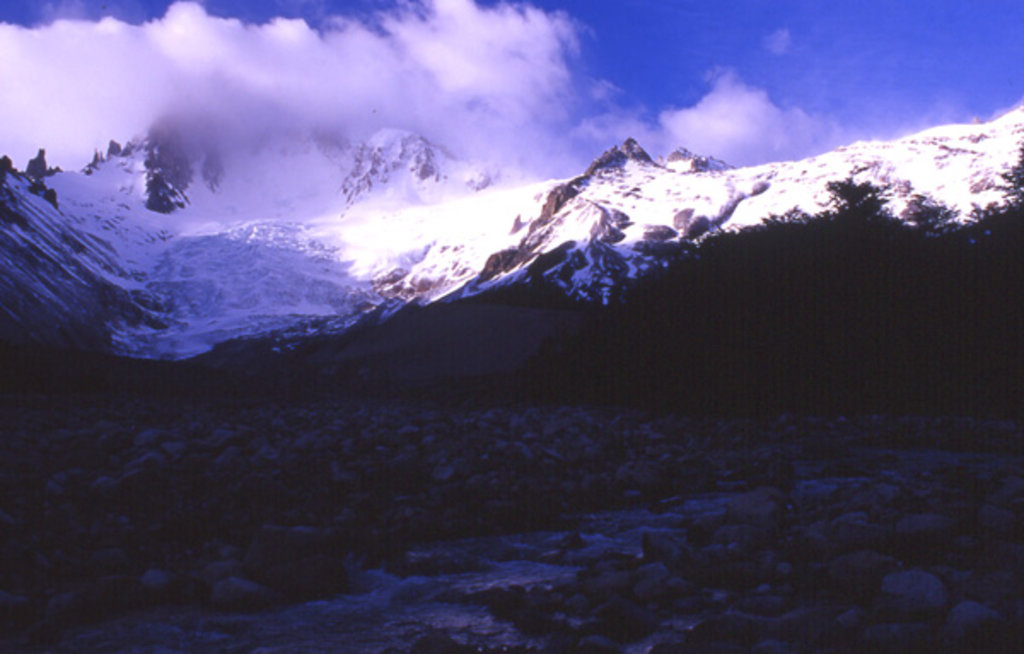 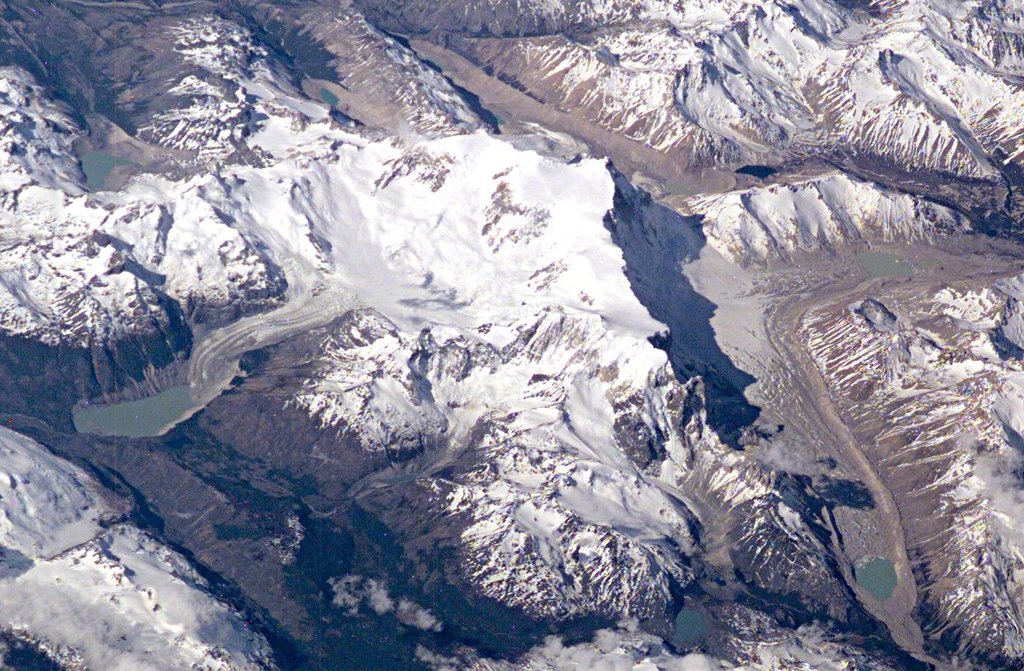