Lago del Desierto Provincial Reserve is an outdoor recreation destination located in the province of Santa Cruz in southern Argentina. The reserve is known for its stunning landscapes, various lakes, mountains, and glaciers. In total, the reserve contains 20 named mountains, the tallest being Cerro Neumayer at 2,669 m (8,757 ft) in elevation. The most prominent peak in the reserve is Cerro El Trueno with 1,101 m (3,612 ft) of prominence. 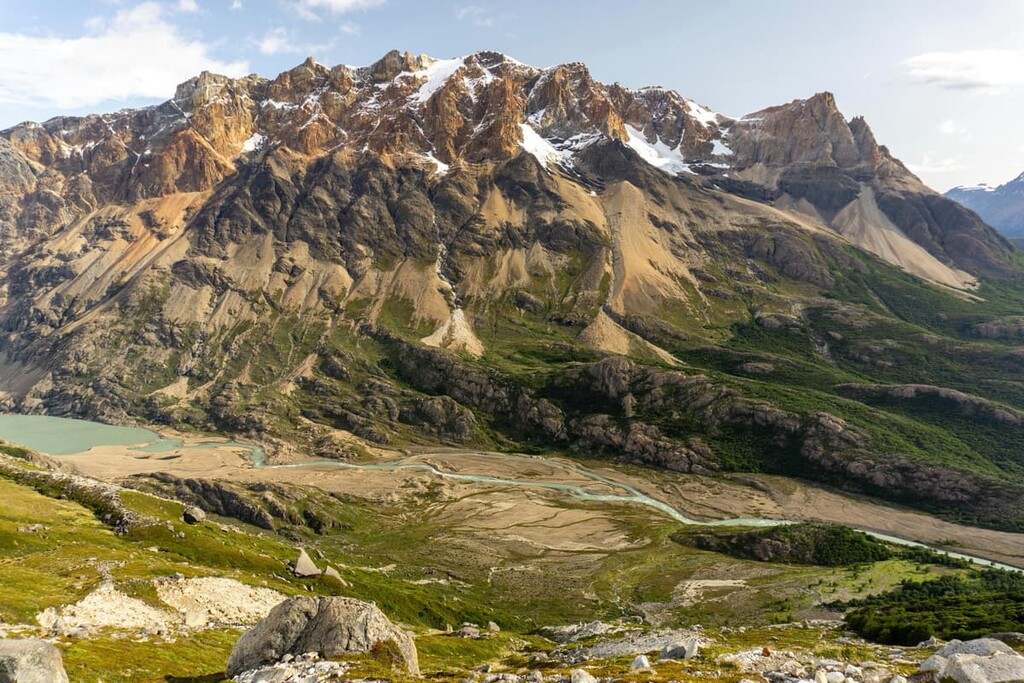 The major feature of the reserve is Lago del Desierto (Laguna del Desierto in Chile), also known as Lake of the Desert or Del Desierto Lake. The reserve encompasses the valley surrounding this iconic lake, including lands to the north and east of the Southern Patagonia Ice Field.

The lush valleys of the reserve are marked by rugged peaks lining its western edge. Within the reserve are four major glaciers that dominate the western region: Huemul Glacier, Milodon Glacier, Cagliero Glacier, and Marconi Glacier.

For the most part, the reserve is trail-free. This minimal number of trails allows Lago del Desierto to be the focal point of the protected region. The crystal clear waters are surrounded by the Patagonia forest along the steep slopes. Furthermore, although Monte Fitz Roy is located outside of the park boundaries, the mountain is a focal point for when looking south from the lake.

The geology of the reserve is closely intertwined with that of the Southern Andes. The entire Andes range began forming around 25 million years ago with the subduction of the oceanic crust beneath the South American Plate.

Over the course of millions of years, the mountains began to rise to their current size and shape. Because the tectonic plates are still moving, the peaks continue to be pushed upward and eastward a few millimeters each year.

The southern Andes that lie within Patagonia line the western region of the reserve. Meanwhile, the peaks around Lago del Desierto are part of the foothills. The Southern Patagonia Icefield is just south of the reserve and is the largest icefield in all of South America.

This massive icefield, along with the glaciers within the park boundaries, are the remains of the Patagonian Ice Sheet which covered the entire region during the last glacial period. The icefield and its numerous glaciers feed the lake within the park as well as the various other lakes in the region.

Within the reserve, and the surrounding region, lie high amounts of biodiversity. Flora in the reserve consists primarily of trees. Within the Andean Patagonian Forest, common tree species include coihue, the Chilean hazel, Patagonia cypress, ulmo, and the podocarp.

The vast amounts of fresh water, along with the protection provided by the forested hills, allows a wide range of fauna to thrive in the reserve. Common animals include rheas, guanaco, kodkod, cougar, along with the occasional South American gray fox.

Both the guanaco and South American gray fox populations are on the decline due to the increase in human activity in the region. Besides mammals, the reserve is also home to over 80 species of birds including condors, eagles, perching ducks, and the Magellan oystercatcher.

Long before the arrival of Spanish colonizers, the Santa Cruz province was inhabited by the Tehuelche. Rock art in the region dates back to over 10,000 years ago in Cueva de las Manos.

The vast landscape of what is now southern Chile and Argentina allowed for the Tehuelche and other Indigenous peoples to migrate throughout the region. The Spanish arrived in 1520 though the number of people in Spanish settlements in the region at the time remained low due to the extreme weather compared to northern parts of South America.

During the 1820s and 1830s, many people of European descent traveled throughout what is now the reserve and its surrounding region. These include people such as Charles Darwin and Luis Piedrabuena. It wasn’t until the twentieth century, however, that the total population in Santa Cruz province began to steadily rise.

There are many trails throughout Lago del Desierto Provincial Reserve. Here are some of the best hiking options in the region to consider:

The most popular hike in the reserve is the Cerro Torre Lookout. This short trail totals just 5.8 km (3.6 miles) with 225 m (738 ft) elevation gain and it starts in the town of El Chaltén. True to the name of the trail, the route offers impeccable views of Cerro Torre along with the other snow capped peaks within the Southern Andes.

Also starting in the city of El Chaltén the loop trail travels south taking visitors to two separate viewpoints. The reserve and the surrounding region are known for being home to nearly 100 species of birds, thus the lookouts are popular places to birdwatch. The trail totals 5.3 km (3.3 miles) with 210 m (688 ft) elevation gain.

The trail is 18.3 (11.4 miles) with 1,129 m (3,704 ft) of elevation gain. From the summit, hikers have amazing views of Fitz Roy. This route is quite moderate until the final steep climb up to the summit viewpoint.

Looking for a place to stay near Lago del Desierto Provincial Reserve? Here are some of the best cities and villages to check out in the region:

Located at the southern end of the park lies the village of El Chaltén. Situated within Los Glaciares National Park, the village is known for being a hub when it comes to hiking, trekking, and mountaineering.

Due to this popularity, El Chaltén has been named Argentina’s trekking capital. The city’s population is around 1,700 people and tourism in the region continues to grow each year. Despite its southern location, temperatures in the village are fairly moderate, making it accessible throughout the year.

South of Los Glaciares National Park lies the city of El Calafate. The city is located on the southern border of Lago Argentino, the biggest freshwater lake in the entire country. Although it was once just a small village for wool traders, El Calafate has grown into a popular tourist destination for people interested in exploring the nature of the region.

El Calafate has a population of around 21,000 people and it continues to grow each year. Besides its close proximity to Lago del Desierto Provincial Reserve and Los Glaciares National Park, the city is also located near Perito Moreno National Park, Cerro Chaltén, and Cerro Torre. 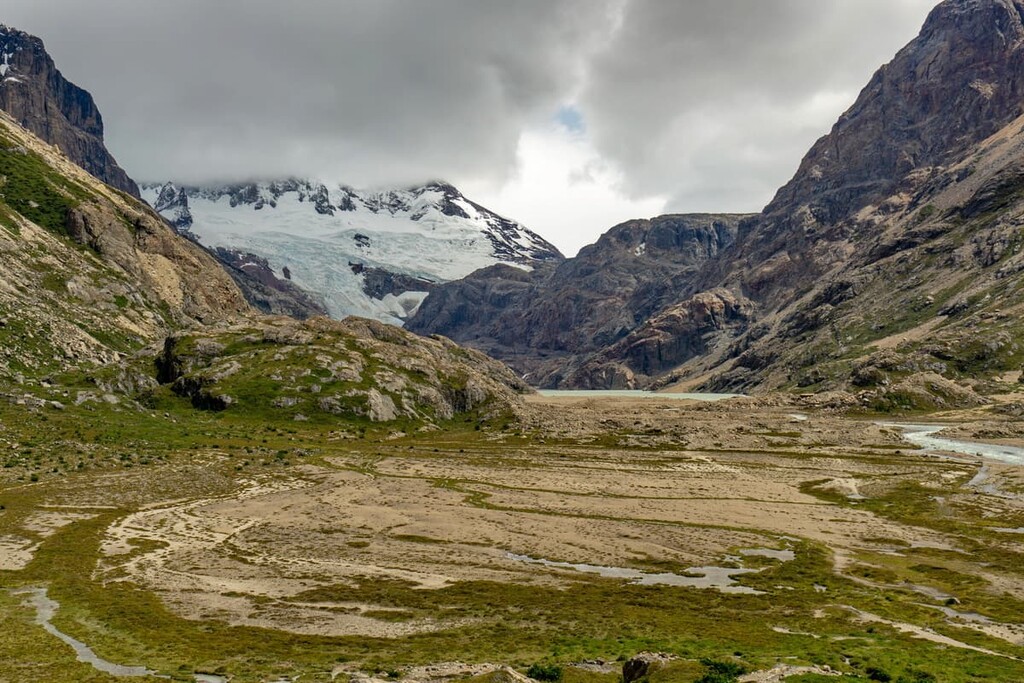 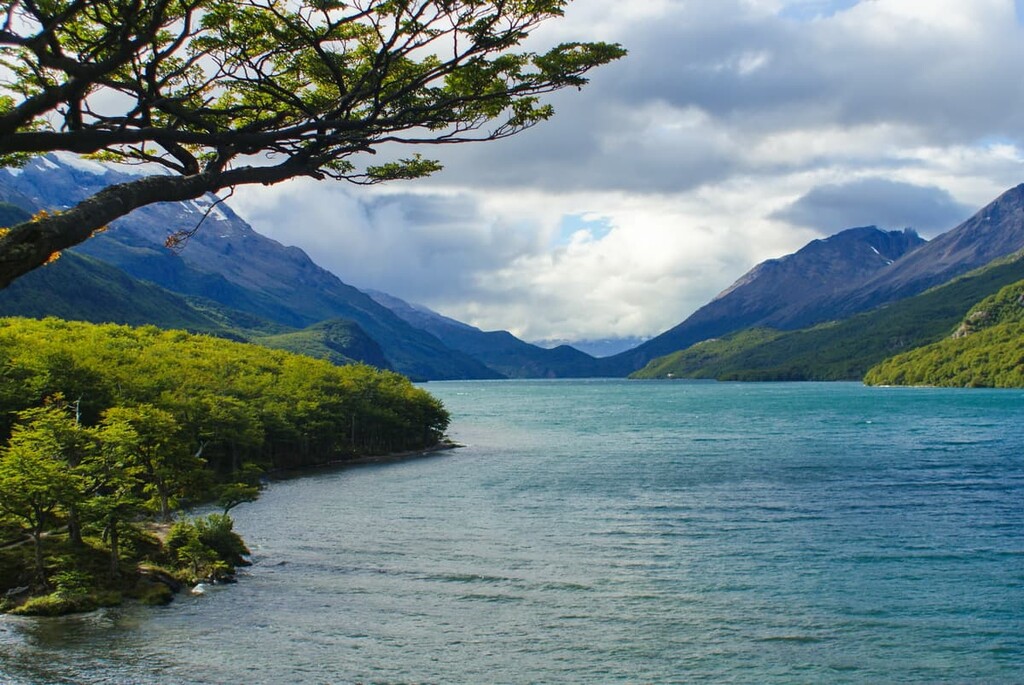 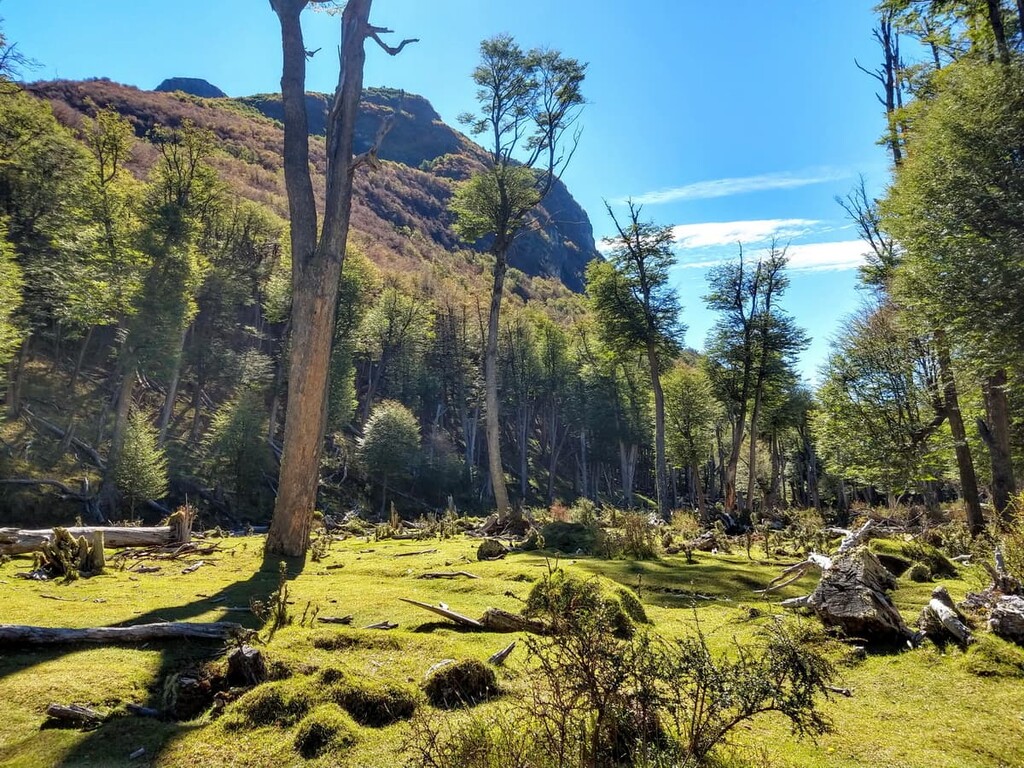 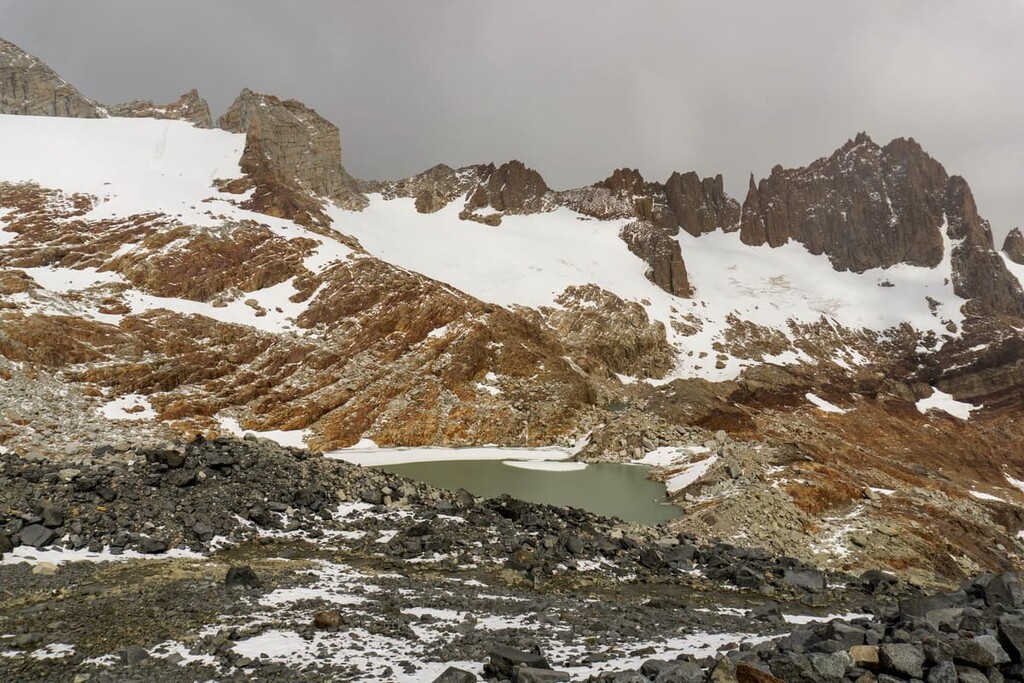 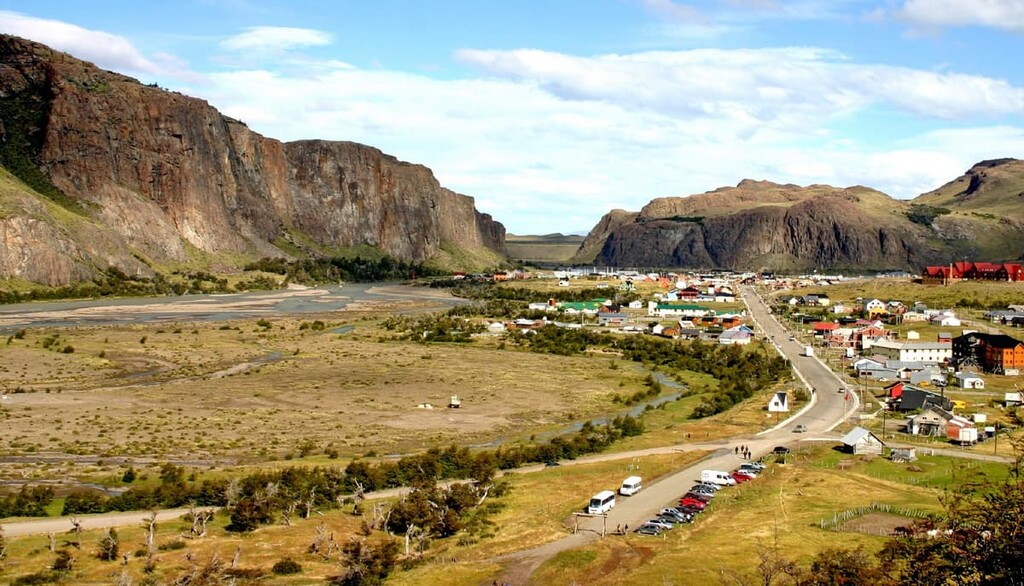 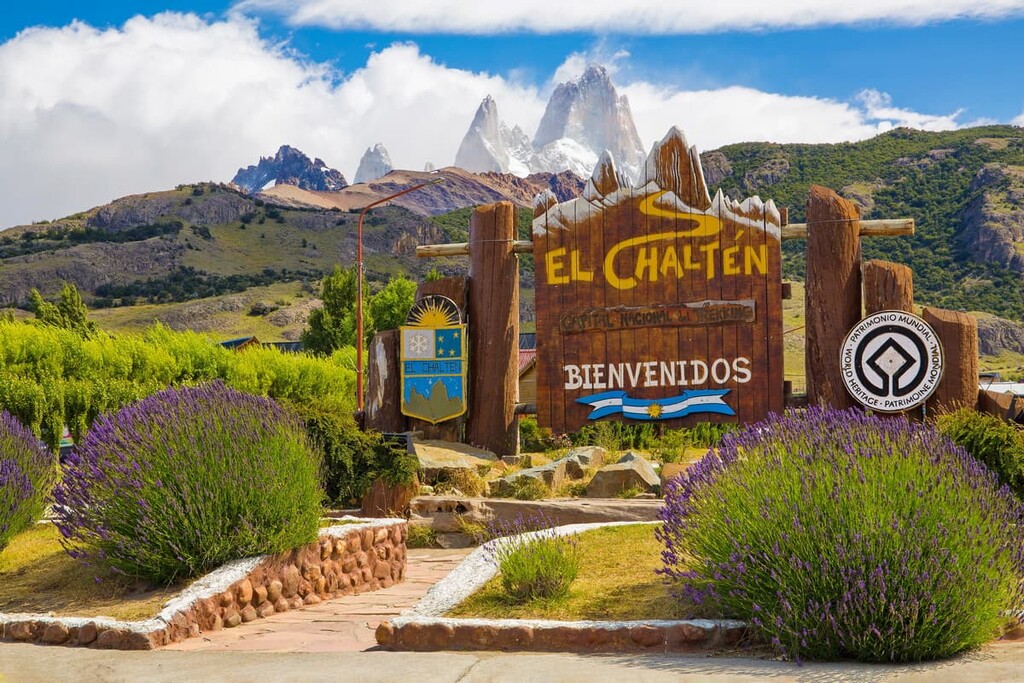 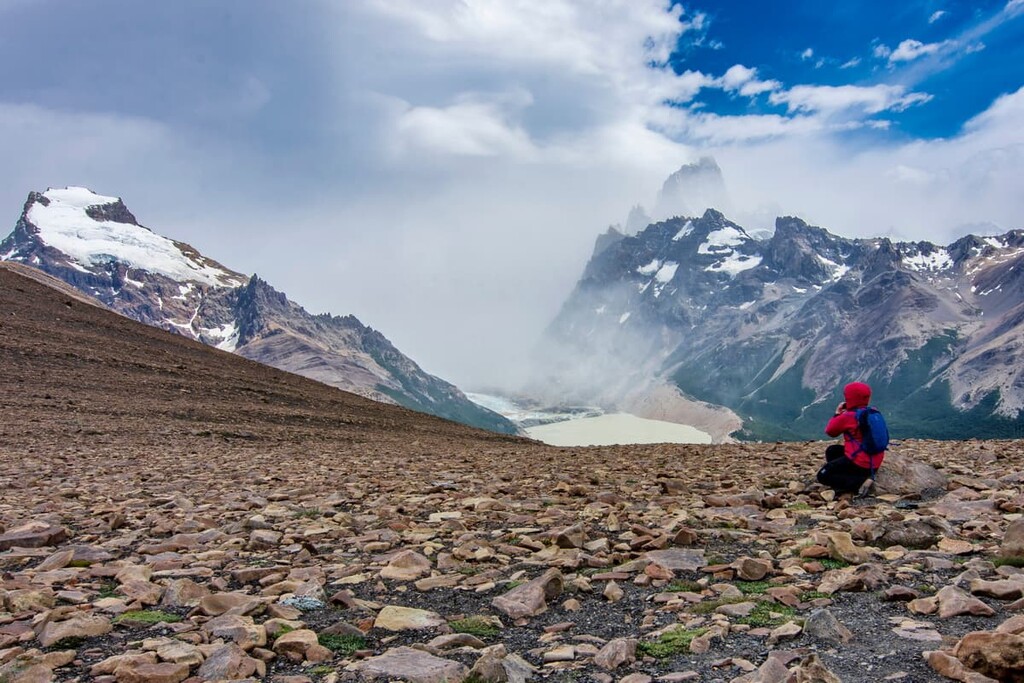