Located in southwestern Argentina lies the Los Glaciares National Park. Within the Santa Cruz province of the country, the park spans 2,807 square miles and is the largest park within all of Argentina. Los Glaciares National Park was established back in 1937, and as the name suggests, is home to the massive ice caps of the Andes. Though the park was established in the 1930s it later became a World Heritage site in 1981 by UNESCO. Outside of Antarctica, Greenland, and Iceland, the park protects the largest ice caps in the world. Forty-seven massive glaciers dominate the landscape starting at elevations as low as 4,900 feet as they move downward in elevation to around 660 feet. There are 124 named mountains in Los Glaciares National Park. Cerro F.P. Moreno is the highest point at 11,378 feet. The most prominent mountain is Monte Fitz Roy with 6,417 feet of prominence. 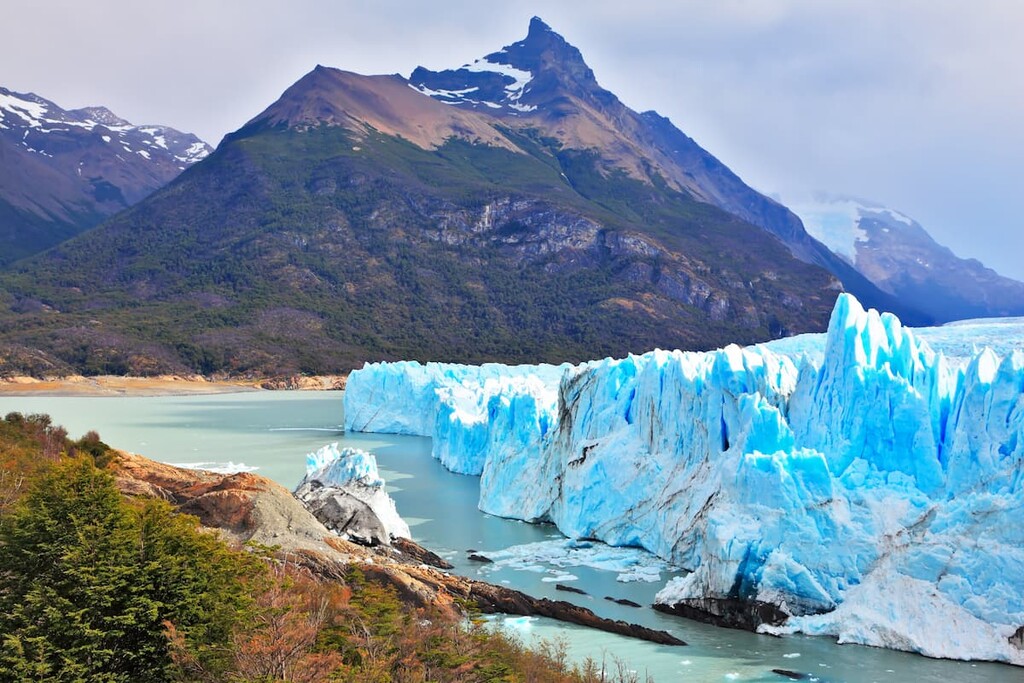 The park and its many glaciers can be divided into two major regions. In the south of the park lies part of Lake Argentino which is the largest lake in the country, spanning 566 square miles. This southern region of the park is home to the major glaciers that feed into the iconic lake. Some of the most notable are Perito Moreno Glacier, Spegazzini Glacier, and Upsala Glacier. In this region, boat tours take visitors through the glaciers often to visit Bahia Onelli and admire them from a distance.

Despite glaciers covering nearly 30 percent of the park, animals still roam throughout. Rheas along with guanaco, guina, cougar, and the South American gray fox inhabit the region. Yet the dramatic increase in human activity and cattle ranching has led to a sharp decline in the guanaco population and has left the gray fox endangered. Los Glaciares National Park is home to over 100 species of birds including eagles. The most fertile region of the park lies between the Patagonian steppe and the ice caps. Here the land is covered in lengas, guindos and nires. The forest provides protection for other animals including the huemul deer and perching duck.

While the park was established to protect this delicate ecosystem, the region has been drastically affected by human activities including tourism, cattle ranching, and global warming. Increase in temperatures has led to an increase in forest fires, leaving parts of the park completely destroyed. The harsh environment conditions of the park have helped preserve much of it despite human contact.

Laguna de Los Tres: The Laguna de Los Tres trail that leads from El Chalten is one of the most popular routes in the entire park. The trail totals 13 miles roundtrip with 3,325 feet of elevation gain. After a steep ascent into the mountains, the trail provides panoramic views of Los Tres Glacier, Cerro Madsen and Mount Fitz Roy. While the hike turns around after 6.5 miles, this trail also marks the beginning ascent up Mount Fitz Roy though extensive mountaineering experience is required to reach the summit.

Laguna Torre: Starting from El Chalten, the Laguna Torre hike is 11 miles round trip with 1,770 feet of elevation gain. The lake, though beautiful on its own, sits at the base of Cerro Torre. The trail climbs steadily, predominantly following the Fitz Roy river.

Located within the Los Glaciares National Park lies the small town of El Chalten. The town sits at the base of Cerro Torre which is popular for both hiking and mountaineering. It’s close proximity to numerous trails within the park led to it being named Argentina’s Trekking Capital. The city is reliant on tourism with less than 1,000 full-time residents. During the warmer months, visitors come to the village for trekking, camping, and exploring the gorgeous surroundings. The rise of tourism has led to a few bars and restaurants being established along with shops for purchasing outdoor gear.

Located along the southern shore of Lake Argentino lies the city of El Calafate. The city’s location makes it a popular destination for visitors of Los Glaciares National Park, Perito Moreno Glacier and Cerro Torre. The population of the city fluctuates with the seasons with an estimated 10,000 full time residents. Besides being surrounded by outdoor activities, the city is also home to Glaciarium, a museum dedicated to glaciers primarily within the Southern Patagonia Ice Field. 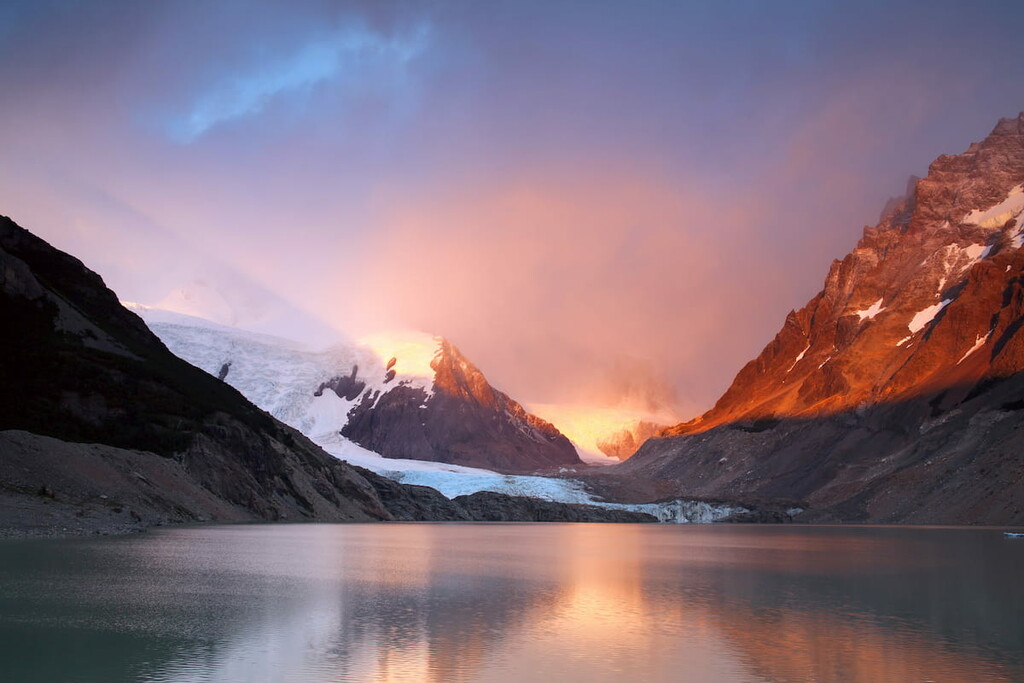 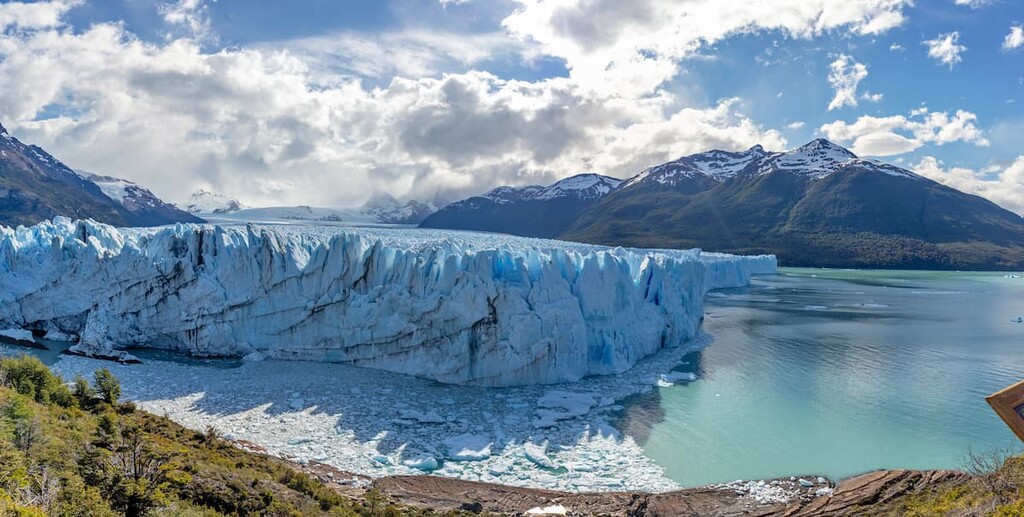 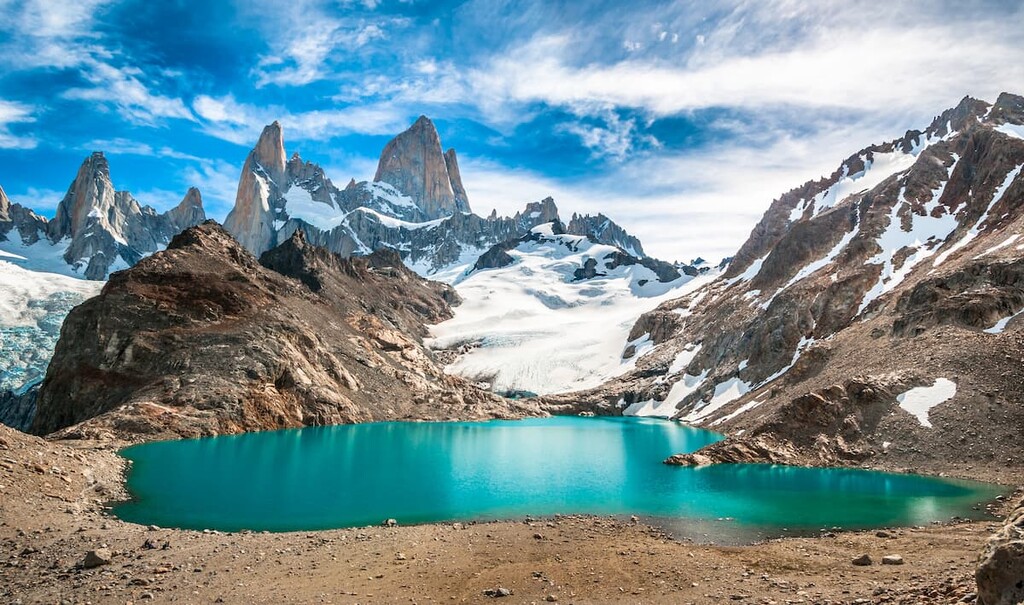 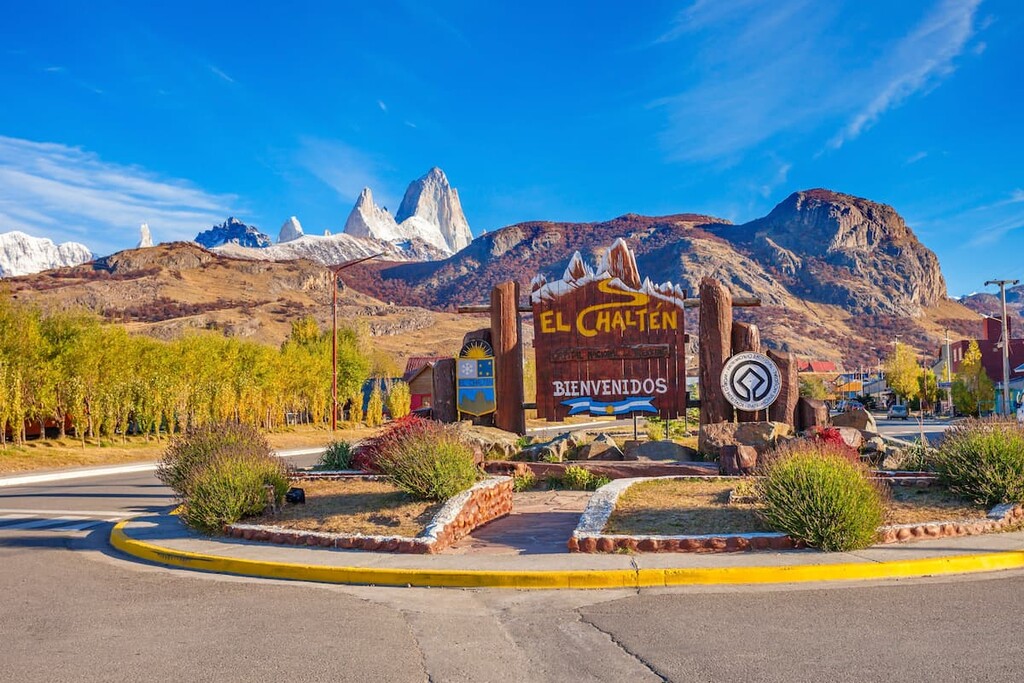 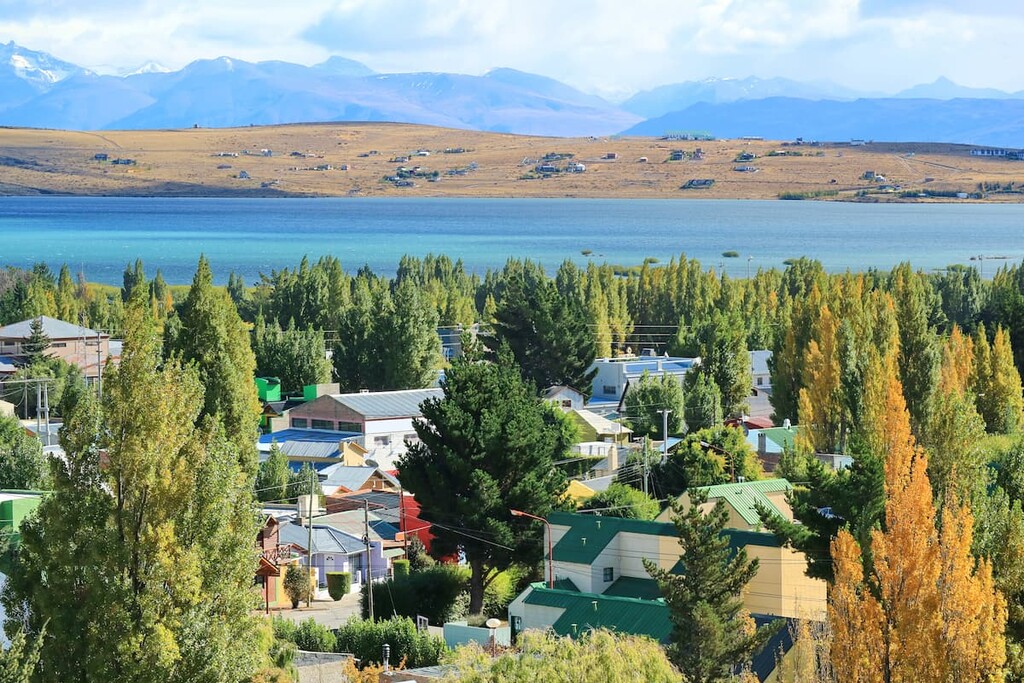 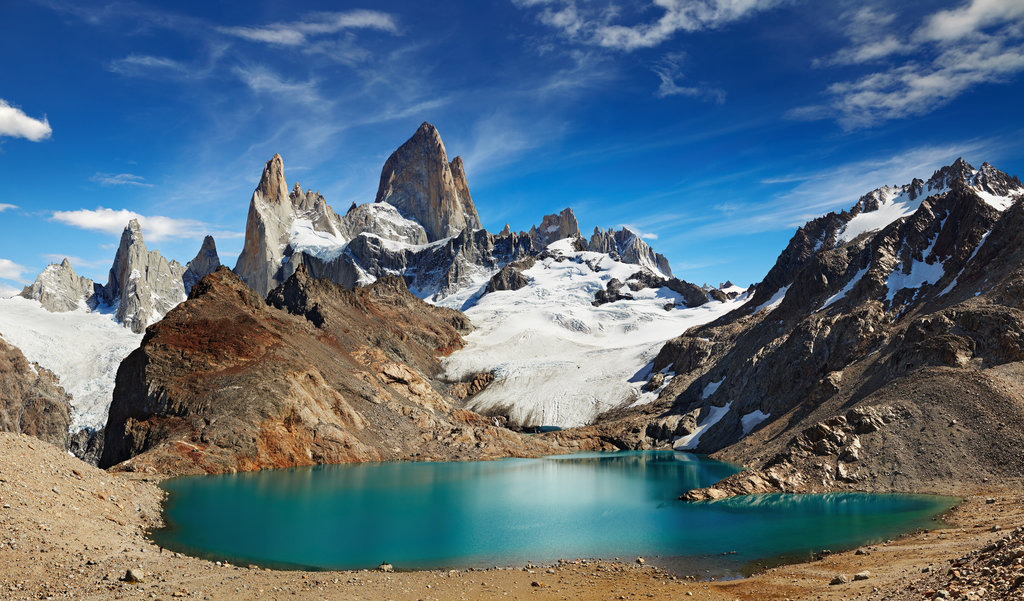 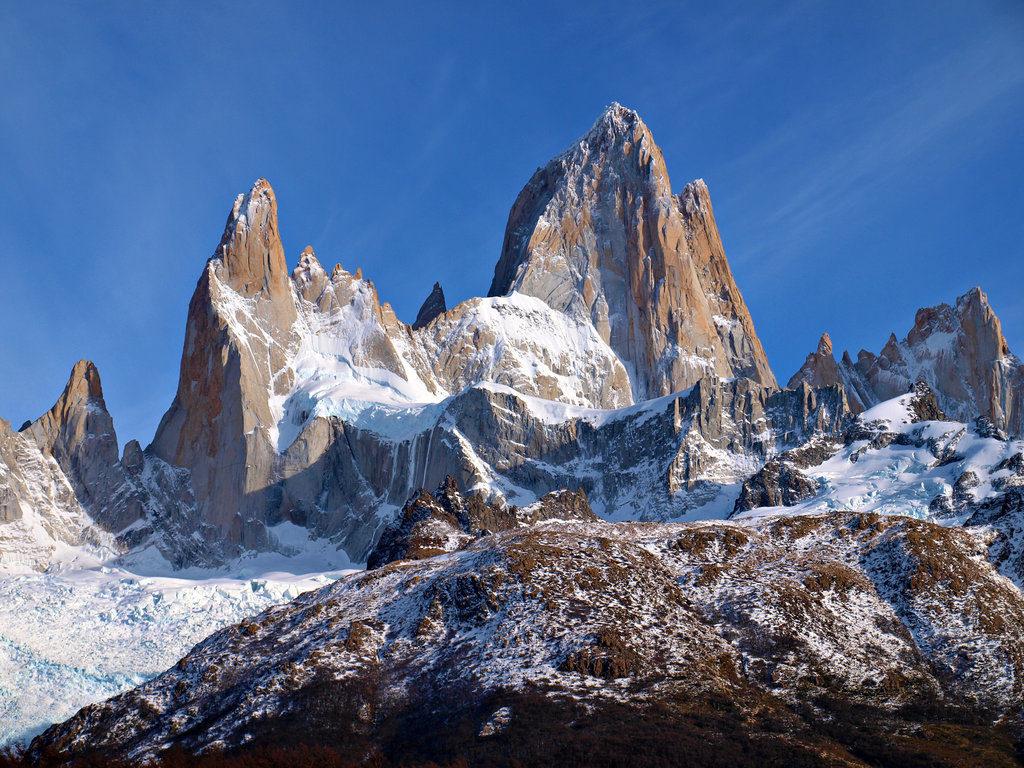