Kaisergebirge is one of the most famous mountain groups in the Eastern Alps and is of great interest for climbers and hikers. Almost all Kaisergebirge is located within a nature reserve in northwestern Austria and is not accessible by roads or cable cars. There are 149 named mountains in Kaisergebirge, the highest and most prominent of which is Ellmauer Halt at 2,344 m (7,690 ft). 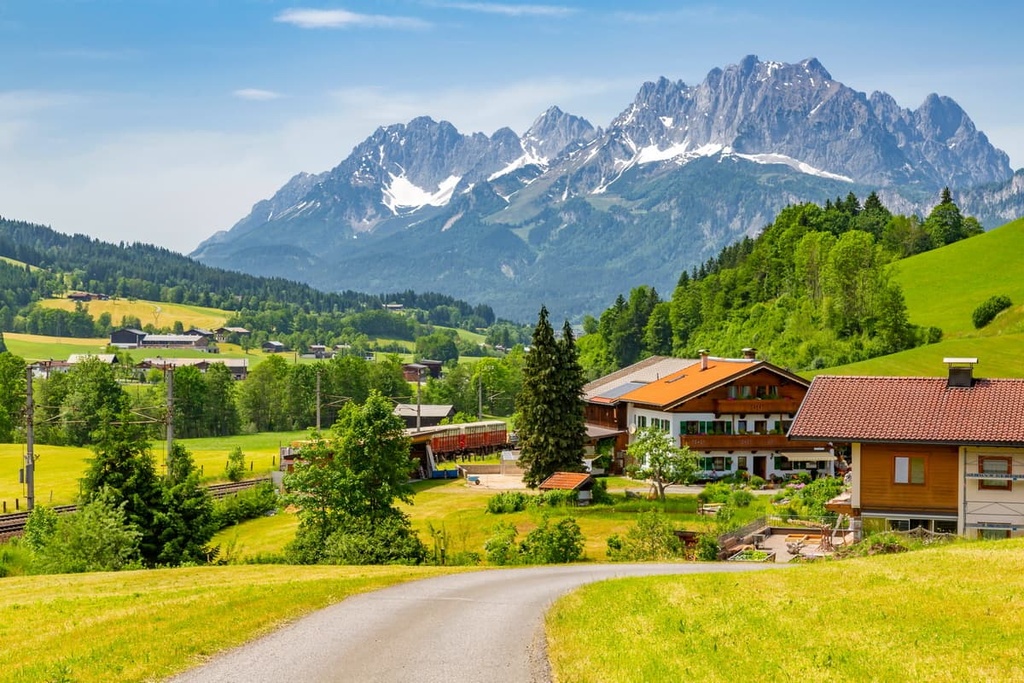 Kaisergebirge is a mountain group that’s part of the Northern Kalkalpen (Northern Limestone Alps) in the Eastern Alps. Located in Austria in the state of Tyrol between Kufstein and St. Johann in Tyrol, the Kaisergebirge consists of two distinct subranges.

Much of the range is located in the Kaisergebirge Nature Reserve, which encompasses 102 sq. km (39 sq. mi) of land. The reserve is located in the areas of the municipalities of Kufstein, St. Johann, Ebbs, Ellmau, Going, Scheffau, and Walchsee.

There is only one cable car in the group, the Kaiserlift in Kufstein, and it leads to the Brenjoch. The Kaiserlift was renovated extensively in 2014 and 2015, and it finally started operating again in May 2015.

There are no other cable cars in the area because of the limitations put in place by the nature reserve. However, as the Kaisertal was the only inhabited valley in Austria without a road connection, there had long been talks of building a road to the area.

Now, the Kaisertalstraße leads from Ebbs through the Anna Tunnel (length 813 m / 2,667 ft) into the Kaisertal. Built by the municipality of Ebbs as a private road, it was officially opened on May 31, 2008. That said, only a select group of authorized people, such as official authorities and residents, are allowed to use the road, while tourists are not.

The most significant peaks and mountain groups of the Kaisergebirge are the following:

As part of the Northern Kalkalpen, the range consists of Wetterstein limestone and dolomite. The region is also home to extensive moraines that were left behind at the end of the last glacial maximum.

Between Fleischbank and the Totenkirchl, there is a small cirque glacier called the "snow hole," which is disappearing due to climate change. Other features in the range include the Hintersteiner See, in the far western part of the group, which is used by visitors and residents alike as a swimming lake.

The forests of the group consist of trees like beech, silver fir (Abies alba), and Norway spruce (Picea abies). You can also find the common ash (Fraxinus excelsior), sycamore maple, and alder in the Kaisergebirge.

Several rare, regionally endemic invertebrates can be found in the Kaisergebirge, too, such as Allobobophora smaragdina, which is a type of earthworm, as well as some spider and butterfly species.

Typical vertebrates found in the group include alpine and fire salamanders, smooth snakes, and adders. Chamois, ermine, snow vole, and mountain hare can be found in higher regions of the range, too.

Some of the typical bird species in the range include the wood warbler, the common raven, alpine accentor, wallcreeper, black grouse, wood grouse, and rock ptarmigan. Common birds of prey include the hawk, sparrowhawk, and golden eagle.

Here’s a bit more information about some of the interesting species found in the range:

The earliest evidence of human settlement in the Kaisergebirge dates back thousands of years.

This evidence includes pottery dating back to the Bronze Age that was discovered in the Tischofer Cave. Researchers have also found numerous spearheads that are around 27,000 years old in the cave. In fact, the Tischofer Cave is the oldest documented site of human inhabitation in Tyrol.

Documented evidence of a settlement in what is now Kaisertal dates back to at least 1430. One piece of evidence from this time is an old contract for a farm called “Hinterkaiser.” The regional name "Kaiser," however, is much older and can be found in a Kitzbühel register as early 1240, where a "Gamsgiayt an dem Chaiser" is mentioned.

Tourist development in the Kaisergebirge began late in the nineteenth century. It can be assumed that most of the peaks in the region were previously climbed sporadically by locals without formal documentation. During the late nineteenth century and early twentieth century, the limestone walls of the Wilder Kaiser were very popular among climbers from Munich.

In the early 1920s, a group of nature lovers called for greater protection of the Kaisergebirge. The primary aim of this protection was to prevent the Kaisergebirge from being overdeveloped by cable cars and roads. Only in 1961, after a referendum, was a nature reserve officially permitted in the area. The reserve officially opened on April 19, 1963.

The climbing styles and techniques that were developed before the First World War in the area shaped climbing in the Kaiser up to the 1960s.

Additionally, the region has a long history of being at the forefront of climbing in the Alps. For example, in 1977, Reinhard Karl and Helmut Kiene climbed the Grade VII route Pumprisse on the Fleischbank. In the 1970s and 1980s, a whole series of sports climbing routes were opened in the Kaisergebirge, some of which were extremely difficult.

Hiking around the "Wilder Kaiser" offers various options for every type of hiker to enjoy. The region is said to be one of Austria's most beautiful mountain areas, which says a lot about the sheer quality of the scenic beauty in the Alpine Republic.

There is a lot to see in Kaisergebirge, from the spectacular Schlier waterfall and imposing cliffs that glow impressively in the twilight to the gentle Kitzbüheler Almen. Here are some of the best hikes in the range to check out during your next trip.

The Klammlweg is a tricky 5.5 km (3 mi) hike that will take you around 3 and a half hours to complete. It requires excellent physical fitness and some quality hiking equipment. The trail starts at a parking lot and leads to some spectacular views and beautiful scenery.

The Kaiserkrone is a trail that starts from the Gruttenhütte on road 14A. It then takes you onto the Wilder-Kaiser-Steig below the Kaiserkopf.

Wilder Kaiser during the hike to Gruttenhütte

The hike continues below the Kaiser peaks of Treffauer and Tuxeck over the Lenggries through fragrant mountain forests, and it offers extensive views of the nearby Kitzbühel Alps and the glaciers of the Hohe Tauern. This 13.4 km (8 mi) hike is best for experienced hikers and will take most people around six hours to complete.

The Ellmauer Tor is a huge saddle that’s located in the heart of the Kaisergebirge. The hike to Ellmauer Tor starts at the Wochenbrunner Alm and heads toward the Gaudeamushütte.

It takes you over alpine meadows, through mountain pines, and past impressive scenery over the scree fields to the Ellmauer Tor where superb views await. This hike is 7.7 km (5 mi) long and it takes most people 5 hours to complete.

The stunning Kaisergebirge Nature Trail is a 7.7 km (5 mi) long route that starts at Hüttling. From here, the path leads down the valley to the farms and eventually turns along the forest path as you make your way toward St. Johann.

Accompanied by the views of the Wilder Kaiser (2,344 m/7,690 ft) and the mighty Kitzbüheler Horn (1,996 m/6,548 ft), this hike provides some of the most fantastic scenery you can imagine in the region. It will eventually lead you to a clearing where views over the Kitzbühel Alps await.

The Kaiser Mountains offer some of the loveliest scenery in all the Northern Limestone Alps, as well as a lot of sights that are worth a visit. Here are some of the best places to visit during your trip to Kaisergebirge.

The Bergbauernmuseum z' Bach is a museum that offers a very educational experience. It features a remarkable collection of artifacts that are housed in historical rooms that date back to 1795. The museum’s more than 1,200 exhibits tell the history and stories of the often difficult and hard lives of the farmers in the mountains of Tyrol.

Near the museum, you can walk along the Franziskusweg. This sculpture trail by the Wildschönau artist Hubert Flörl, which is well worth seeing, connects the towns of Niederau and Oberau and leads directly past the museum.

The Kramsach Glass Factory was built almost 400 years ago and it is located approximately 2 km (1.2 mi) from Rattenberg. The current owners of the factory have continued a centuries-old tradition of Tyrolean glass craftsmanship for the last 70 years.

Visitors are welcome to tour the factory to see glassblowers, cutters, engravers, and painters from the company as they show off their crafts for all to see.

The Triassic Park near the Kaisergebirge brings Alpine geological history to life and offers fun for the whole family to enjoy. It features the Triassic Center, Triassic Beach, Triassic Trail, viewing platform, Fischer's Coral Garden, and the new stalactite cave. Visitors can also hike, climb, and bike at the park.

The Swarovski Crystal World impresses visitors with its architecture and art installations, which include the play tower, the crystal cloud, and Daniel's crystal world.

Visitors to the museum can admire a large collection of crystals in different exhibition rooms. The impressive exhibition of beautiful crystals and amazing craftsmanship is worth visiting for all travelers to the region.

There are numerous towns located around and close to the Kaisergebirge, all of which offer beautiful architecture and lots of activities for visitors to enjoy.

The provincial capital of Innsbruck is a culturally rich city. Visitors to Innsbruck can check out the Golden Roof, Olympic Museum, Triumphal Arch, and the Alpine Zoo.

Innsbruck’s beautiful architecture and lovely streets invite visitors to explore and discover all the beautiful places. Additionally, Innsbruck is easy to reach by plane as it has its own airport.

The picturesque municipality of Ellmau is located at the foot of the stunning Wilder Kaiser nature reserve. It is located between the Hartkaiser in the south and the limestone massif on the Wilder Kaiser.

Ellmau has developed into a popular tourist destination due to its proximity to the nearby Wilder Kaiser-Brixental, which is Austria's third-largest ski area. It transformed the area into a large winter sports destination, which, with almost 1 million overnight stays per year, is one of the biggest tourist attractions in the region.

Kitzbühel is a small town in the Alps that’s located to the east of Innsbruck and is part of the state of Tyrol in western Austria.

It is famously known for its elegant winter sports resorts and for its annual Hahnenkamm race. Local shops and cafés can be found along the streets of the town’s medieval center. Here, you can also find the Kitzbühel Museum, which tells the history of the city and winter sports in the region.

The municipality of Söll, which is home to around 3,600 inhabitants, is located at the foot of the Hohe Salve in the Wilder Kaiser tourist region. This charming village with its hamlets is flanked by two impressive mountains: the imposing Wilder Kaiser, which is part of the Kaisergebirge, and the Hohe Salve, which is Söll's local mountain.

The Hohe Salve has several sights that visitors shouldn't miss. The ride on the “Talking Hexenwasser Gondola” takes you to the Hexenwasser Hochsöll. Further up, at the summit of the Hohe Salve, is the Gipfelalm, which features Austria's first revolving panorama terrace. 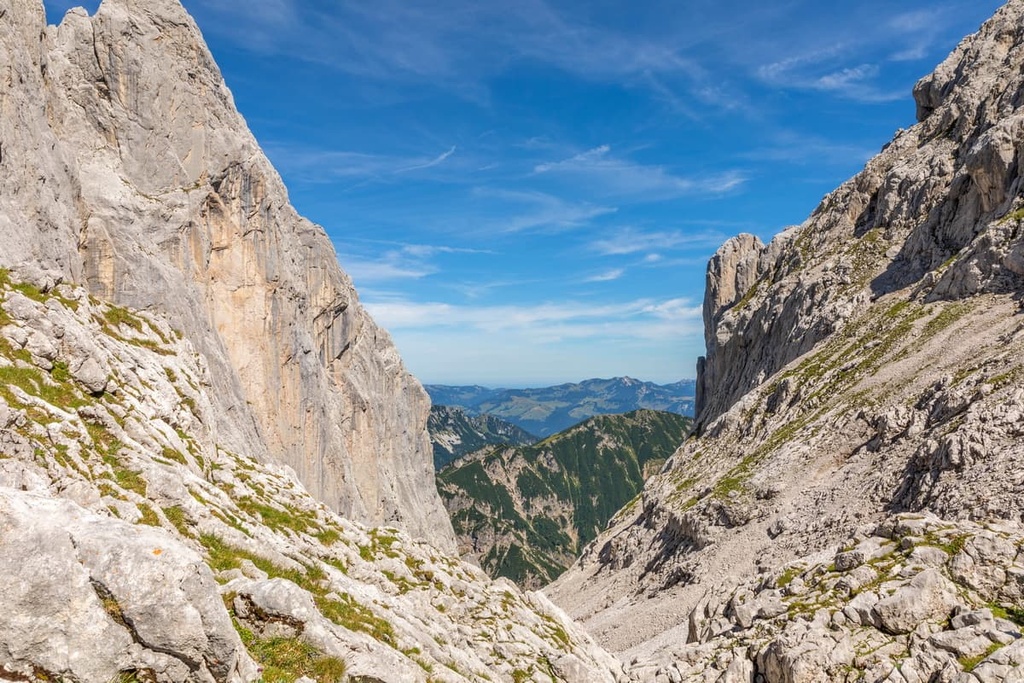 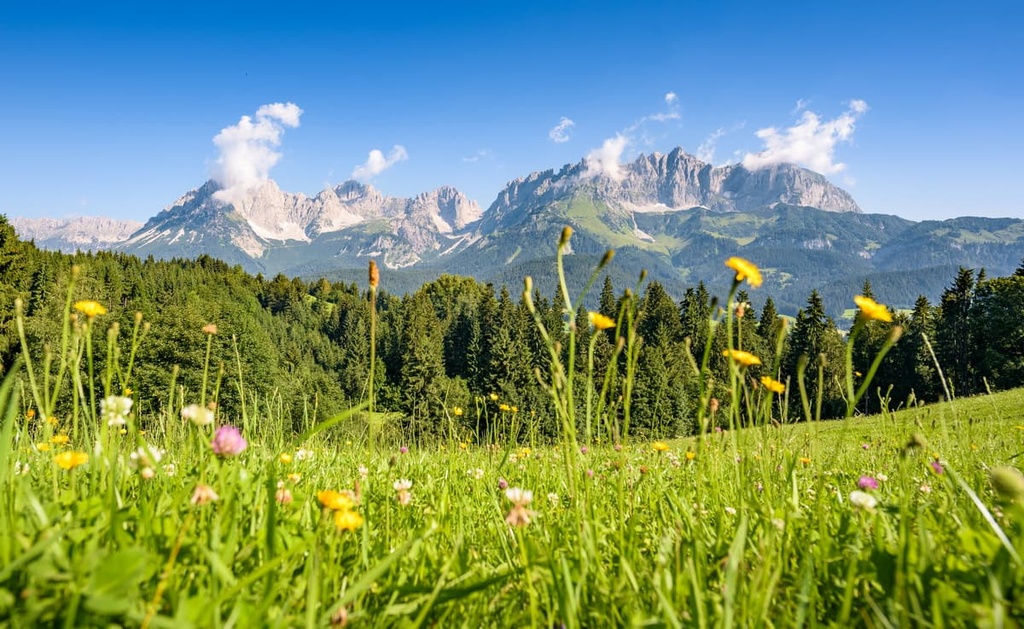 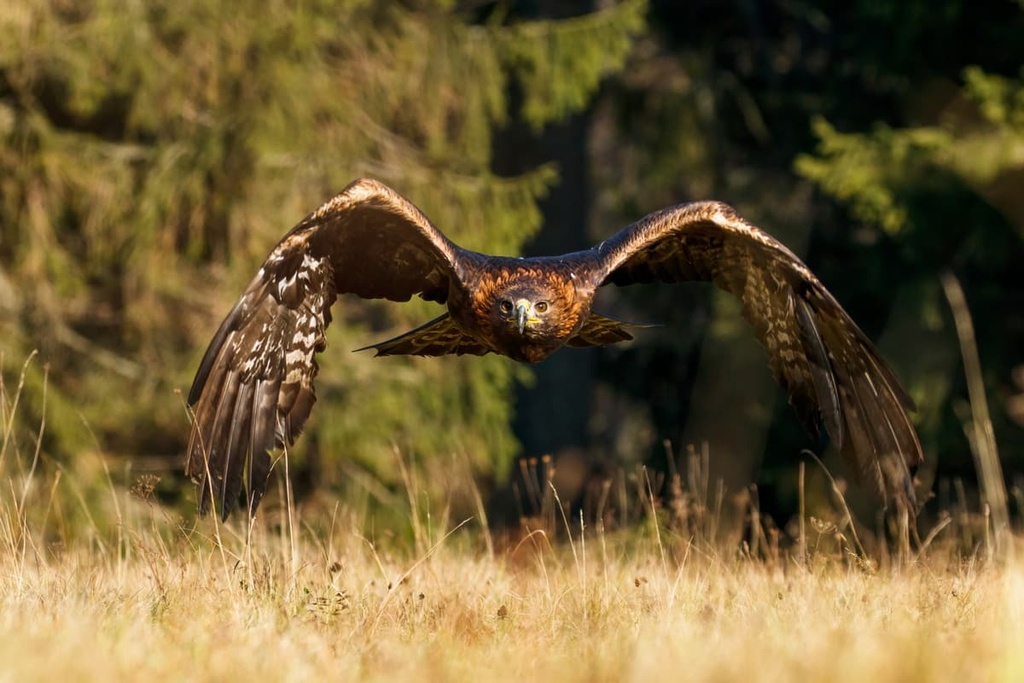 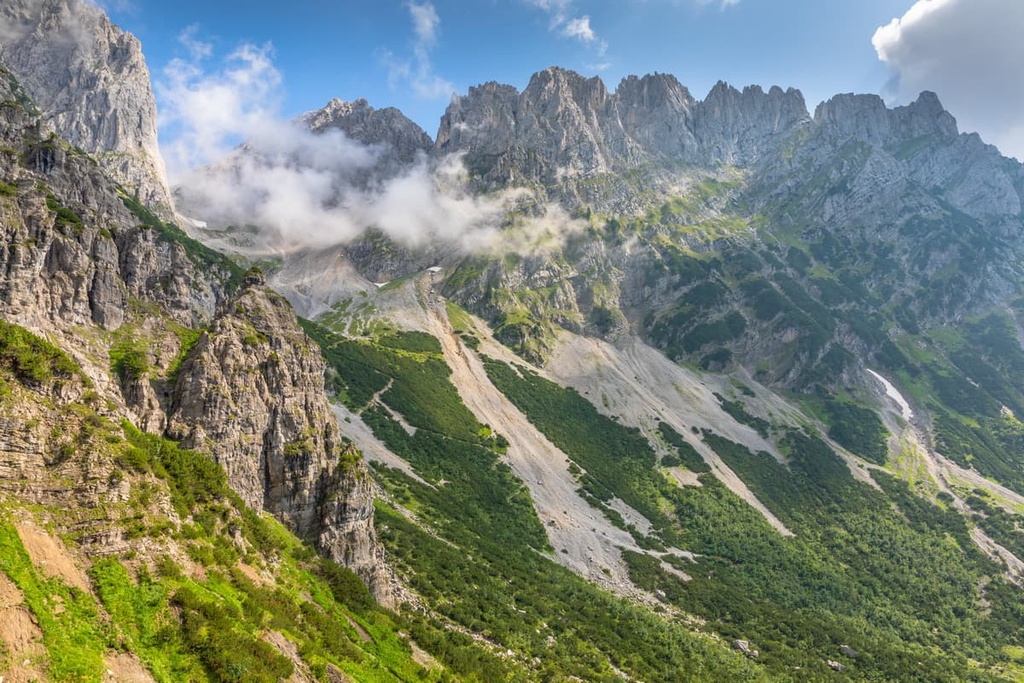 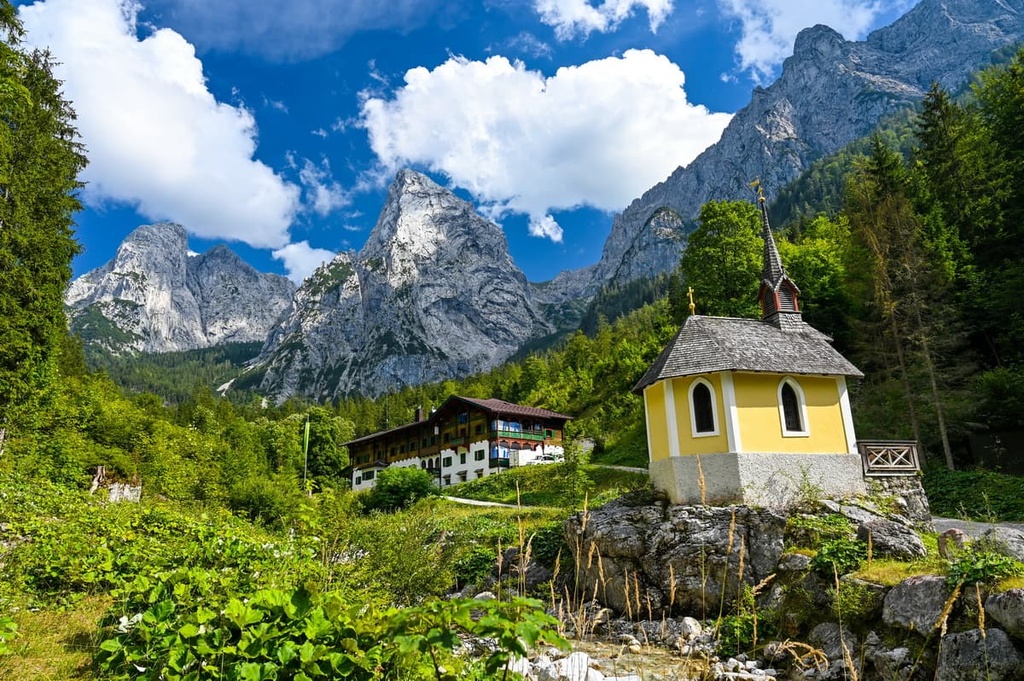 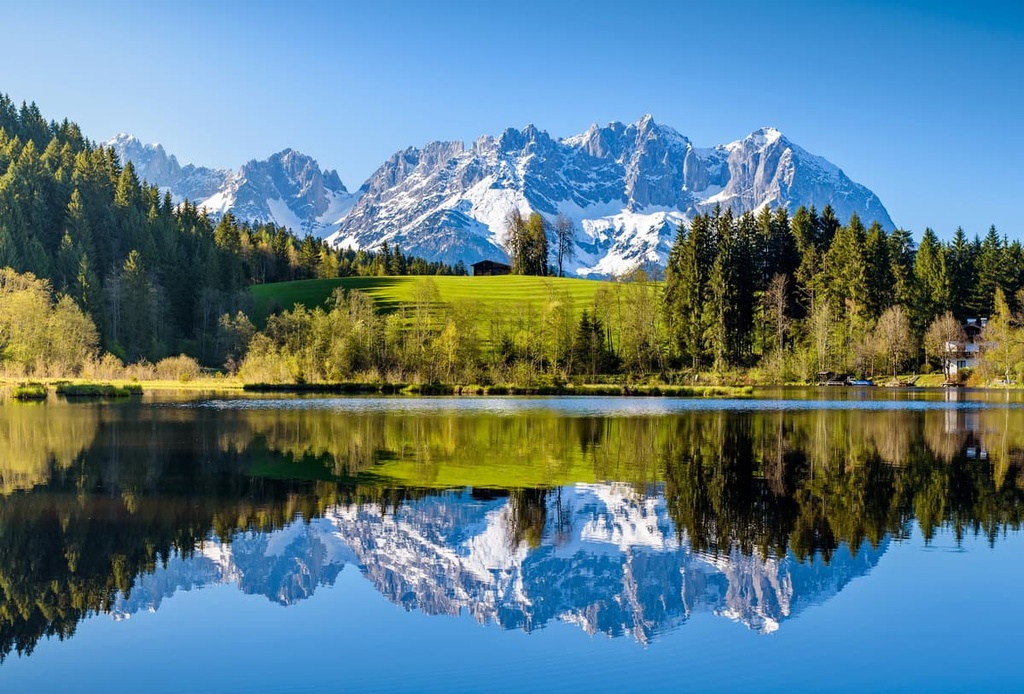