Elk Ridge is a geographical region located in southwestern Utah in the southwestern US. The tallest and most prominent point in the region is Horse Mountain at 9,298 ft (2834 m) in elevation and with 1,670 ft (509 m) of prominence. 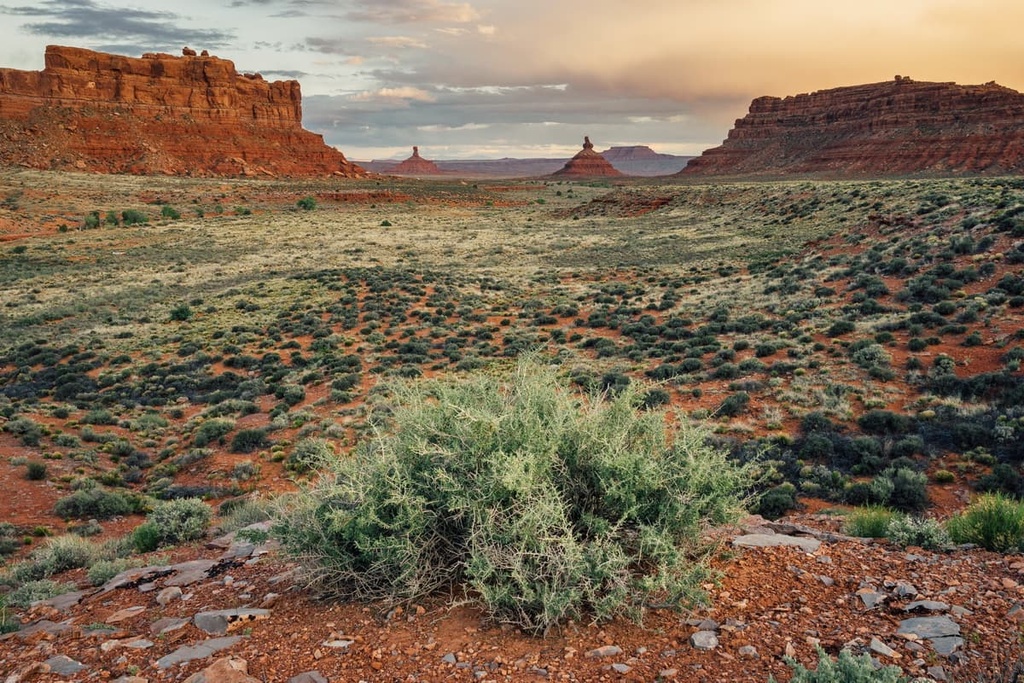 The monument gets its name from a pair of buttes that tower above the desert landscape. These two buttes loosely resemble bear ears, and they are the defining feature of the region.

Similar to much of southern Utah, Elk Ridge is home to unique red rock formations, sections of juniper forest, and high plateaus. A majority of the peaks and buttes within Elk Ridge are unforested.

The Colorado River marks the northern and western boundaries of the Elk Ridge region. A number of the river’s tributaries run throughout Elk Ridge, standing in stark contrast to the regions’ otherwise barren landscape.

The forested sections that can be seen at lower elevations in the area are interspersed with vast desert regions, often containing minimal amounts of vegetation and red rock formations.

Besides being located within Bears Ears National Monument , Elk Ridge is surrounded by numerous other parks, forests, and wilderness areas.

When significant folding did occur, it left behind buttes and plateaus, such as the distinct Bear Ears. As the elevations began to slowly change, the steepened rivers and streams began to carve out the landscape that is apparent today.

The Colorado River marks the northern and western borders of Elk Ridge, and played an instrumental role in shaping the distinct rock formations and outcrops.

Since the region has been geologically stable for hundreds of millions of years, many nearby canyons offer the ideal setting for geologists to further study the Earth’s history.

The Comb Ridge is another important geological feature in the region. Immense pressure resulted in the formation of this narrow ridgeline, which spans 80 miles (129 km) in length but is just one mile (1.6 km) wide.

Some of the major peaks within Elk Ridge include Horse Mountain, Bear Ears East, Bear Ears West, Moss Back Butte, and San Point.

There are relatively few roads and trails throughout Elk Ridge. As a result, the region is fairly undeveloped and it supports a variety of flora and fauna.

The ecology of Elk Ridge is similar to that of much of southwestern Utah. Bears, mountain lions, bighorn sheep, bobcats, and mountain goats are all common in the area. The region is also home to hundreds of bird species, including the peregrine falcon and the Mexican spotted owl. Caves and alcoves found amidst the ridgelines and buttes of the region also provide the ideal habit for 15 species of bats.

Forested sections in the area are often populated by juniper trees, along with the occasional aspen, spruce, or pine tree. During the warmer months of the year, various wildflowers can also be spotted on Elk Ridge, often near water sources.

The land within the Elk Ridge has a long and rich human history that dates back thousands of years. Over 100,000 archaeological sites have been found throughout the region. The land around Elk Ridge is the ancestral homelands of multiple Indigenous peoples.

The Bear Ears Monument is also the first national monument to have been created as a result of a request from a coalition of Indigenous tribes.

The tribes within the Bears Ears Inter-Tribal Coalition include the Navajo Nation, Hopi Tribe, Ute Mountain Ute Tribe, Ute Indian Tribe of the Uintah and Ouray Reservation, and the Pueblo of Zuni. All of these tribes have ancestral ties to the region.

Human history of the region dates back nearly 13,000 years when the people of the Clovis culture hunted in present day Cedar Mesa. Around 2,500 years ago, Ancestral Puebloans occupied much of the region.

Many of the cultural sites which have been uncovered and preserved in the region date back to this time period. Common artifacts include baskets, tools, and dwellings.

The first people of European descent in the region arrived in the sixteenth century, claiming the Four Corners region as New Spain. In 1848, the land within Elk Ridge was purchased by Mexico, forcing the Indigenous tribes off of their ancestral homelands in the process.

Brigham Young sent a group of Mormons to settle in northern Utah during the beginning of the nineteenth century. Mormons believe the region to be part of their promised land, so many initial settlers of European descent in the region were members of the LDS Church.

Despite continual resistance from local Tribal Nations, Mormon settlements began to spread throughout Utah, eventually into the Elk Ridge region. In the 1880s, a group of Mormons traveled into the region, eventually establishing the town of Bluff.

During the 1930s, the region was part of a failed proposal to establish a national monument. The coalition of Indigenous Tribal Nations succeeded in lobbying for the establishment of the Bear Ears National Monument in 2016, which was designated by President Barack Obama.

In 2017, the monument was reduced by 85 percent by President Donald Trump. However, on October 8, 2021, President Joe Biden issued an executive order that reinstated the monument to its original size.
Today the land within Elk Ridge is used for livestock grazing, firewood collection, outdoor recreation, scientific research, cultural and spiritual purposes, and other traditional land uses.

Elk Ridge is home to numerous trails for outdoor recreation. Here are some of the most popular hiking regions in the area:

Though a designated road rather than a trail, the Valley of Gods offers visitors some of the best views in the entire region. The trail is 16 miles (26 km) long point-to-point with 1,653 ft (504 m) of elevation gain.

The gravel road winds through the region, allowing visitors to see the distinct red outcrops that define Elk Ridge. Though passenger cars can make the trek, the route is also used by mountain bikers.

The Bullet Canyon Trail travels across the Bear Ears National Monument. This point-to-point trail is 20 miles (32 km) long with 1,720 ft (524 m) of elevation gain. The hike can be completed in one day though most hikers take 2-3 days to complete the route.

This unique trail travels through the heart of the monument, offering scenic views throughout. The trail winds through canyons, along buttes, and past numerous historical sites in the area. Hikers should be prepared to carry enough water throughout the duration of the hike.

Monarch Cave can be accessed via the Comb Ridge Trail. The short route is 2 miles (3.2 km) long round trip with just 475 ft (145 m) of elevation gain. The trail leads visitors to one of the largest ruins within Bears Ears.

The cave-like rock formation has helped protect and preserve the historical site. Visitors can walk around the ruins, but please do not touch or disturb them.

Looking for a place to stay near Elk Ridge? Here are some of the best cities and villages to check out in the region:

Located just to the northeast of Elk Ridge lies the city of Moab, Utah. The small city has around 5,400 residents and is known for its close proximity to a plethora of outdoor activities. Moab is located just outside both Arches National Park and Canyonlands National Park.

Red rock landscapes can be seen throughout the city, which has made it a popular destination for mountain biking. Moab sits at over 4,000 feet (1,219 m) of elevation, and it is located just to the south of the Colorado River. Other popular sports in the area include trail running, rafting, highlining, and BASE jumping.

Monticello lies just to the east of Elk Ridge and Bear Ears National Monument. The small city is home to around 2,000 people, and it was originally established as a stop along the Old Spanish Trail trading route.

The city was later settled by pioneers from the Mormon Church. Sandstone mountains and bluffs surround the high elevation city. Monticello is also the starting point for the scenic loop drive known as Trail of the Ancients National Scenic Byway. 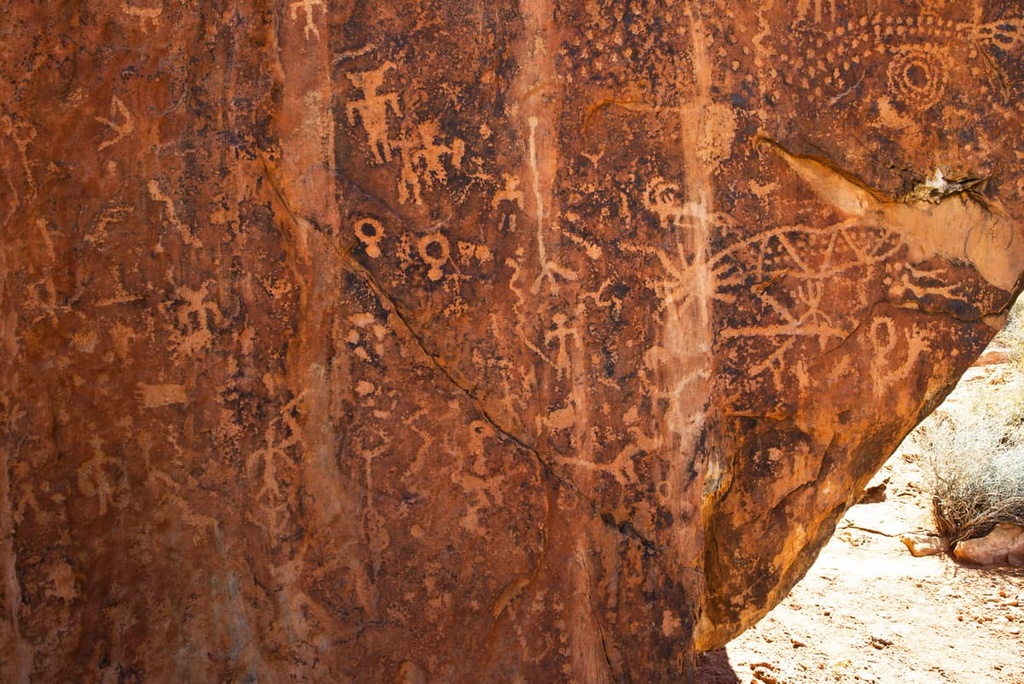 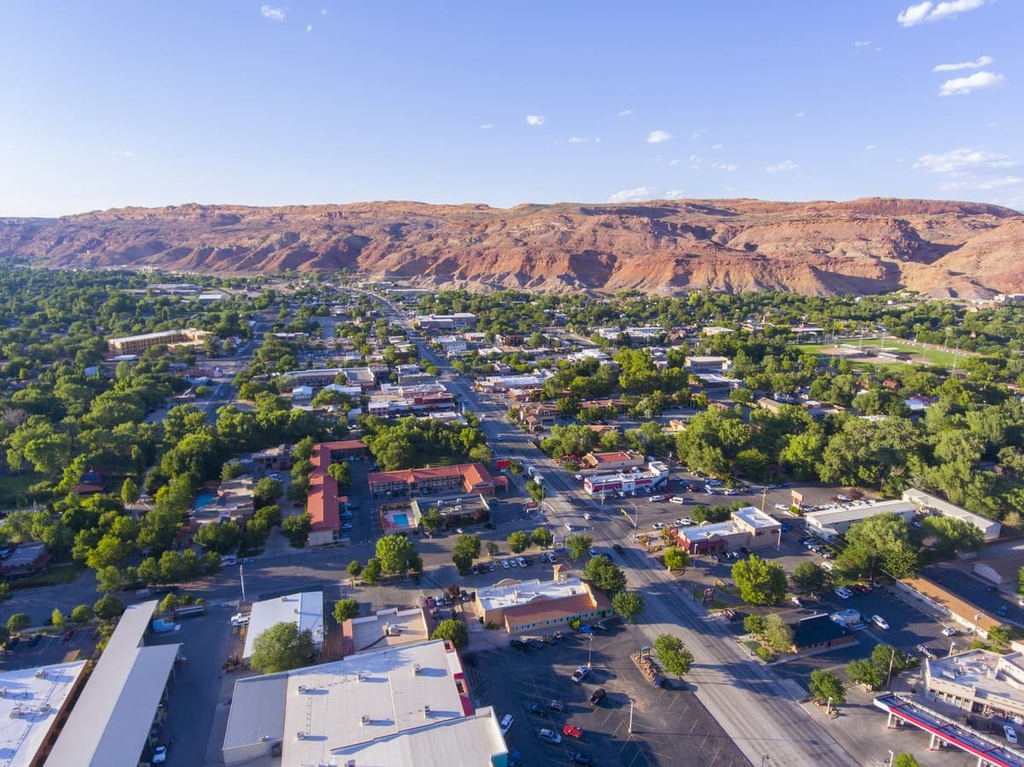 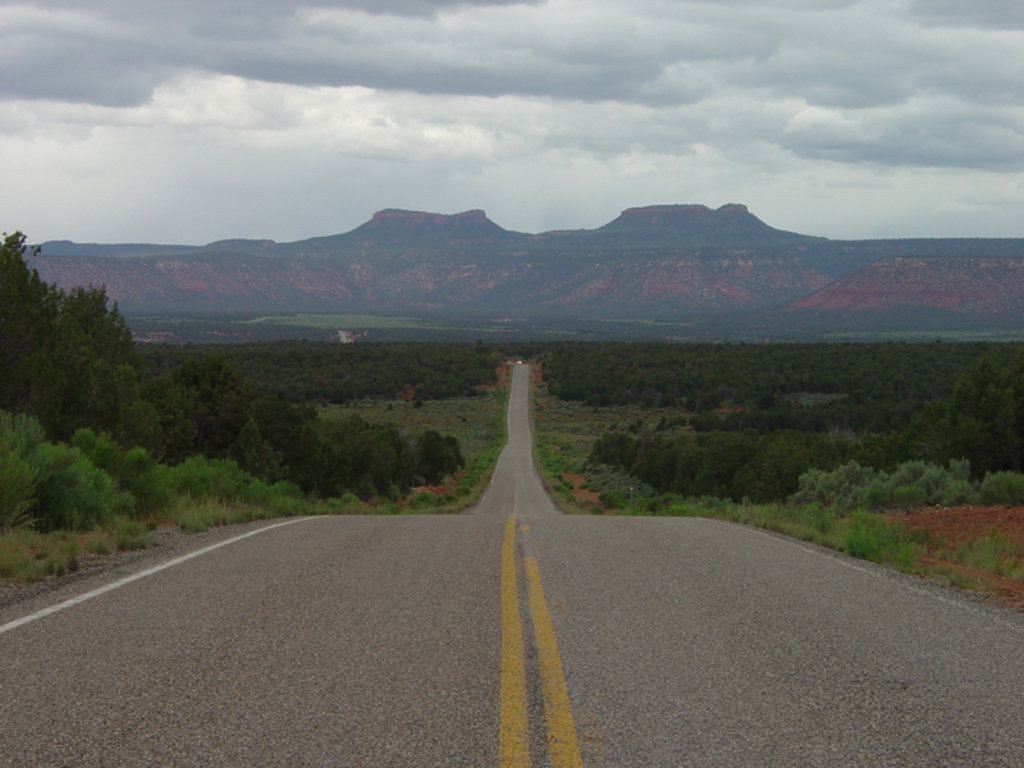