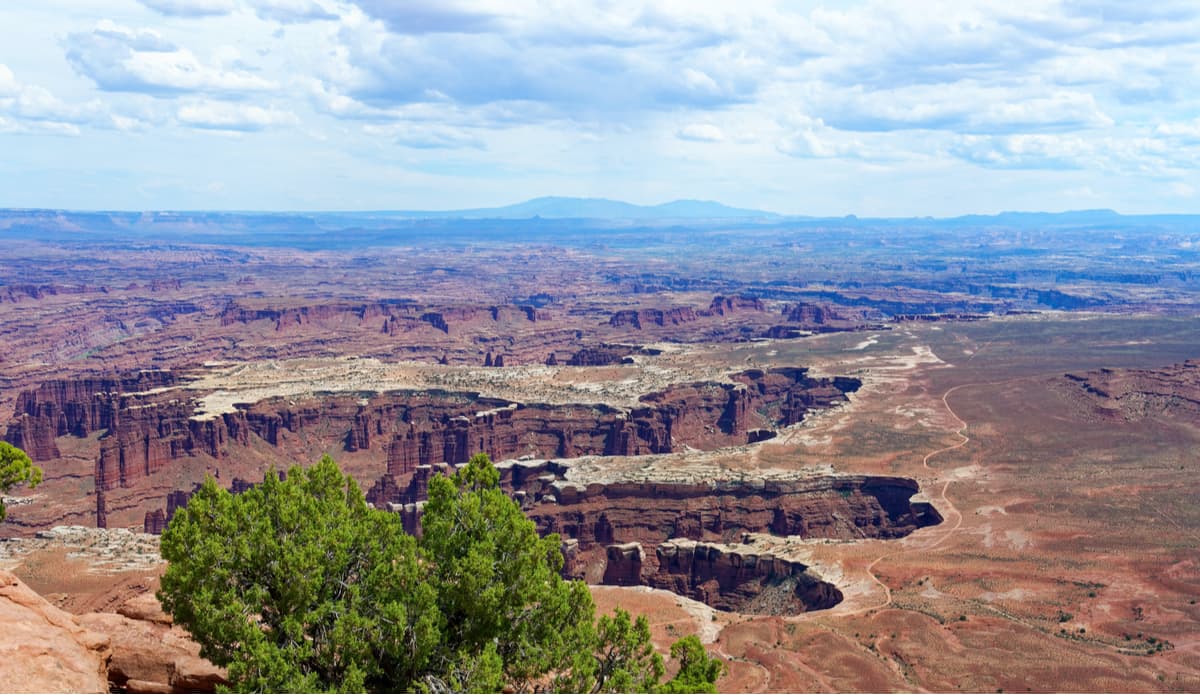 Although the park is best known for its canyons, the Island in the Sky District is home to 12 named mountains, the highest and most prominent of which is Junction Butte. Geologically, the park was carved out from sandstone, thanks to the erosion powers of the mighty Colorado and Green Rivers, whose intersecting paths create the three districts within Canyonlands.

The Island in the Sky District is perhaps the most heavily visited, thanks to its proximity to the bustling town of Moab, Utah. Island in the Sky is a relatively broad and level mesa located in the northernmost section of Canyonlands National Park and is home to a fantastic selection of viewpoints, particularly those that overlook the famous White Rim.

Historically, the region of Canyonlands was home to the Ancestral Puebloans, who lived in the area for millennia inside stone and mud dwellings. Many of these dwellings are fantastically well preserved, though the original tools and other artifacts have mostly been removed over the centuries by looters and other visitors. Other evidence of the Ancestral Puebloans includes their prolific rock art, which can be seen in the form of petroglyphs around Canyonlands National Park.

Despite its proximity to Moab, Utah, Canyonlands didn’t come onto the radar of the National Park Service until the 1950s when the then-superintendent of Arches National Park began traveling through the region to the south and west of Moab. Eventually, after many years of debate and questioning, Canyonlands officially became a national park when it was signed into law by President Johnson in 1964.

These days, the park sees a significant amount of visitors, who enjoy the region’s plentiful hiking, biking, backpacking, and four-wheeling opportunities. In particular, the White Rim Road in Island in the Sky is especially popular among drivers and cyclists who want to experience the beauty of the district firsthand. Thanks to its proximity to Moab, Island in the Sky is the most popular Canyonlands District and it attracts about three-fourths of all visitors to the park.

This short, 30 minute walk leads hikers to a cliff edge, where you can get some fantastic views of Mesa Arch, especially around sunrise, but you can also get some great views of the nearby La Sal Mountains whenever you hike this trail.

This 1.8 mile (2.8km) roundtrip hike to see the overlook of the White Rim is a great, simple way to experience all of the beauty of Canyonlands’ Island in the Sky District firsthand. Although the view of the La Sal Mountains and the Colorado River is best in the late afternoon, there is very limited parking here, so plan to arrive early if you want a spot.

The Syncline Loop is a challenging 8.3 mile (13.3 km) hike that follows the edge of the canyons around Upheaval Dome. Much of the trail requires switchbacks, scrambling, and climbing through boulders, so if you’re not steady on your feet, it’s probably not the hike for you. However, it’s an adventurous option for people wanting to experience the canyons up close and personal.

This 5.4 mile (8.6km) trail has the unique designation of being the steepest trail in Island of the Sky as it descents some 1,400 feet to the White Rim bench through a series of switchbacks. Just don’t forget to enjoy the view along the way!

Island in the Sky is Canyonlands’ most accessible district, so you won’t have to travel far to find a warm bed for the night if you don’t want to camp. Here are some nearby places to stay:

The town of Moab is the official gateway to Canyonlands National Park and is just a 30-minute drive up the park access road to get to the visitor’s center in Island in the Sky. Moab is home to plenty of hotels, campgrounds, restaurants, and outdoor gear shops, so you’ll find what you need in town. Plus, it’s just a 10-minute drive from Arches National Park and two hours from Capitol Reef, so what’s not to love?

Just a four hour drive north of Canyonlands’ Island in the Sky District, Salt Lake City is Utah’s largest city and is home to an international airport as well as an abundance of hotels, restaurants, and gear shops, so it’s a great place to start your adventures. 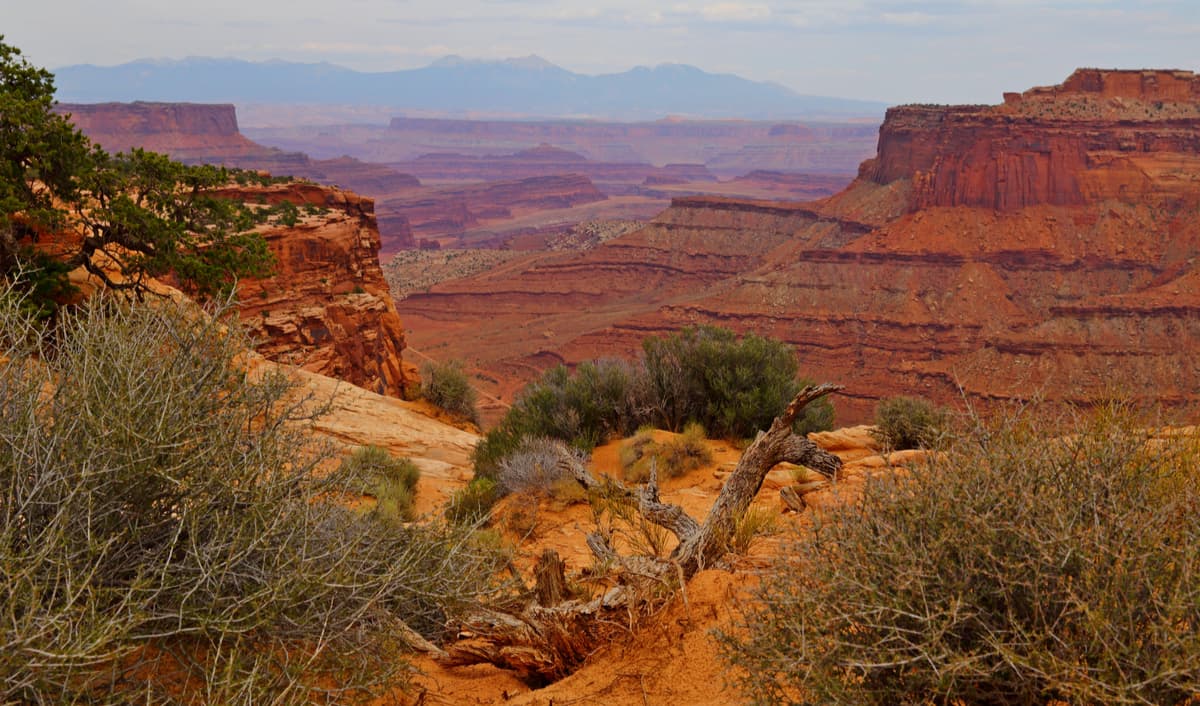 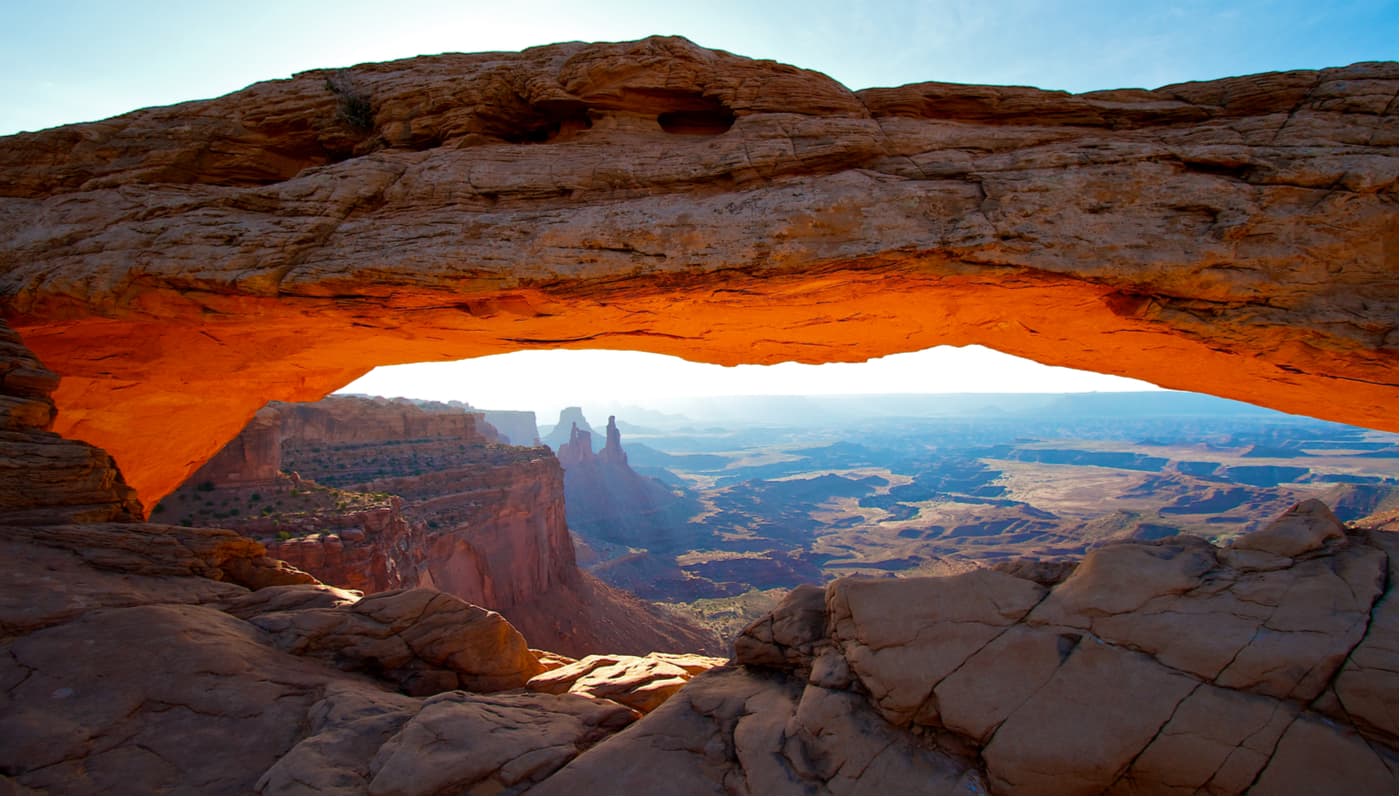 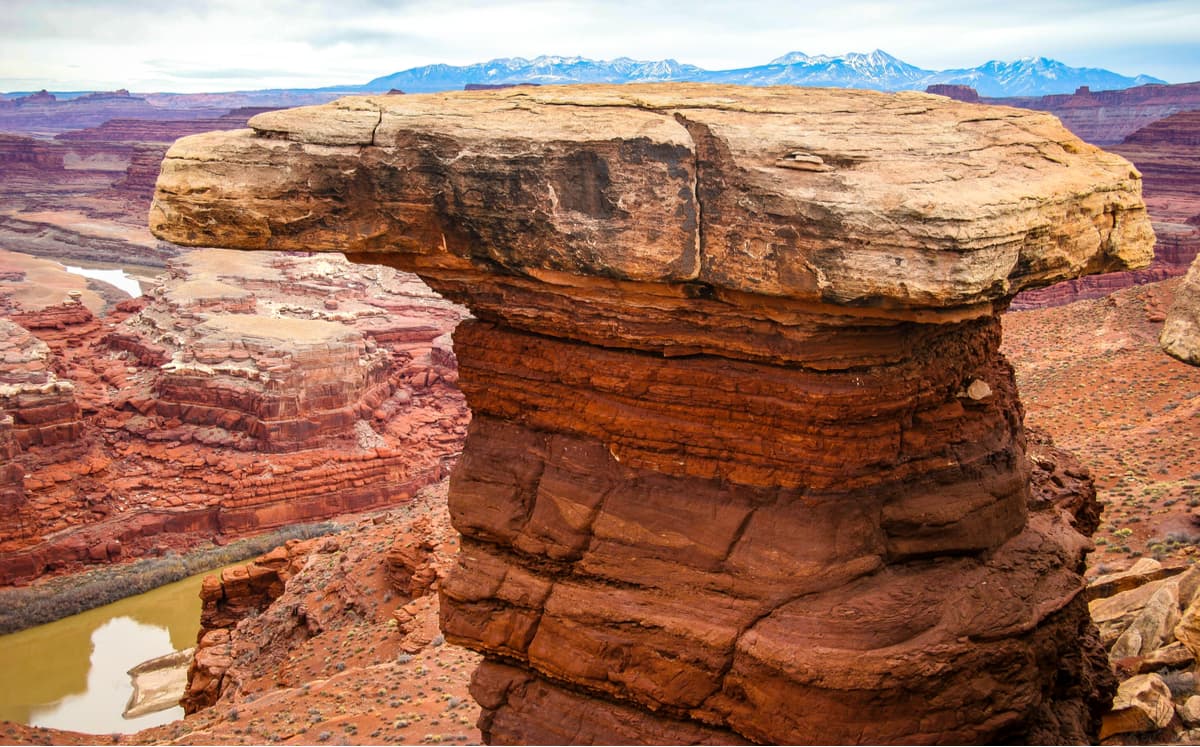 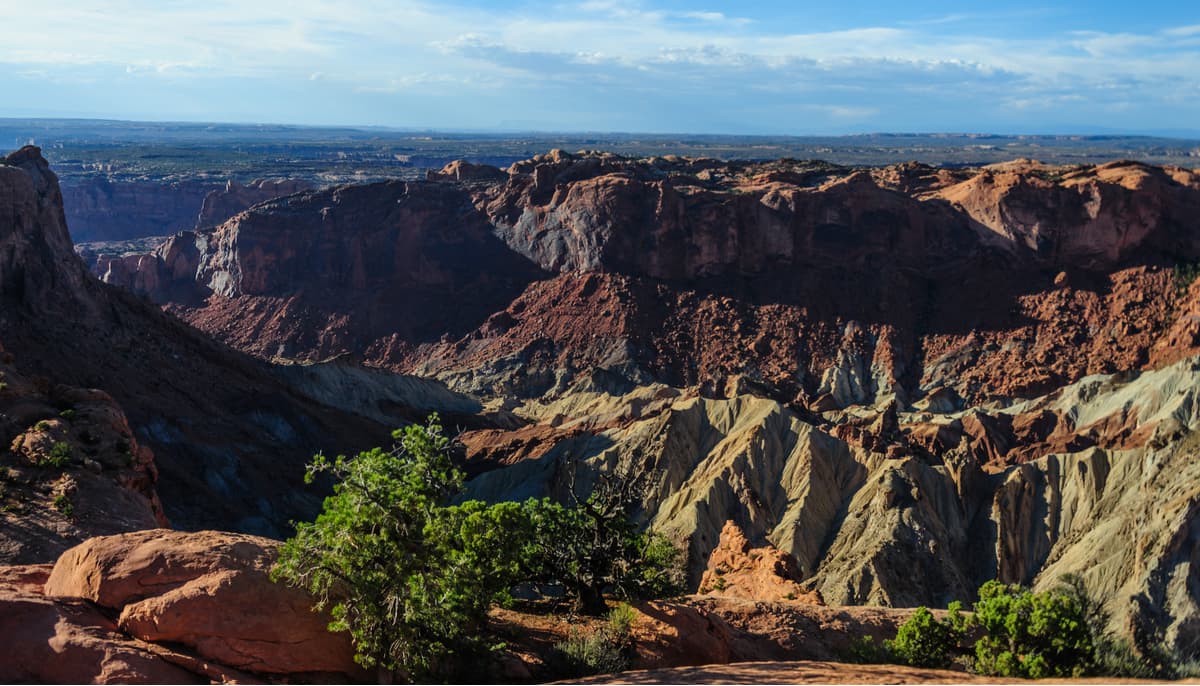 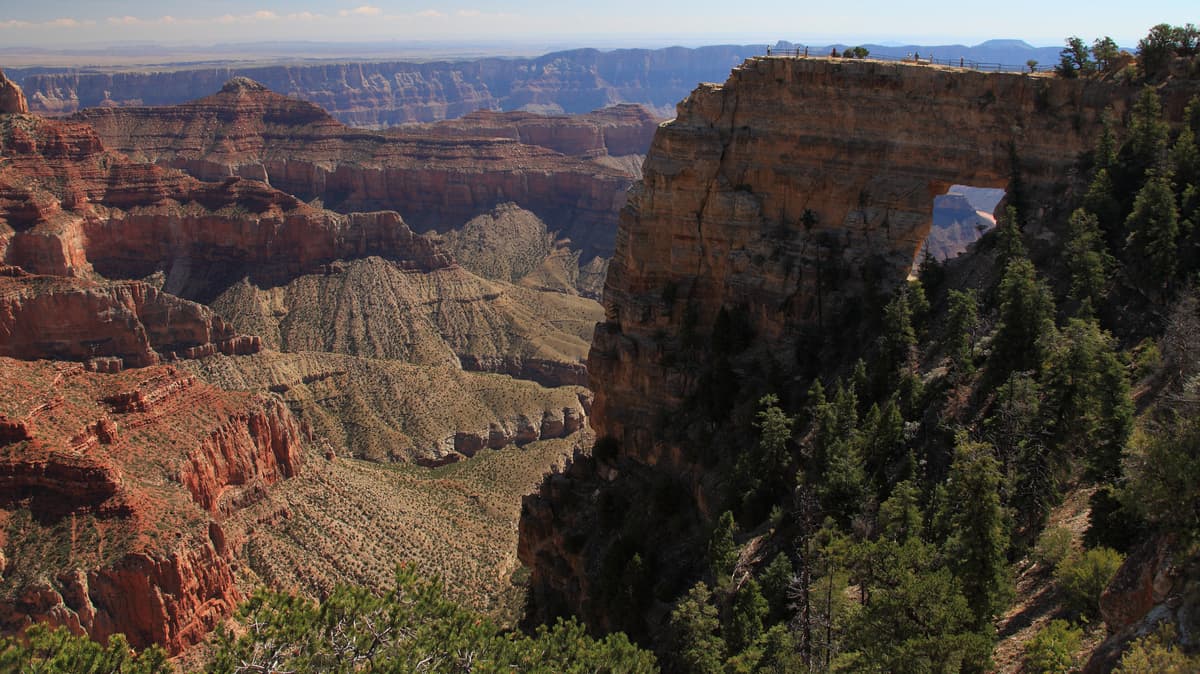