Situated in the heart of South-Central Utah, Capitol Reef National Park was originally established to protect some 377 sq mi (978 sq km) of stunning desert landscape. Originally named Wayne Wonderland by locals, thanks to the park’s partial location within Wayne County, Capitol Reef didn’t obtain national protections until 1937, when President Franklin D. Roosevelt mandated the designation of a national monument in an attempt to protect the region’s fantastic collection of canyons, ridges, buttes, and sandstone monoliths. Capitol Reef National Park is home to 27 named mountains, the tallest of which is Buck Point and the most prominent of which is Ferns Nipple. 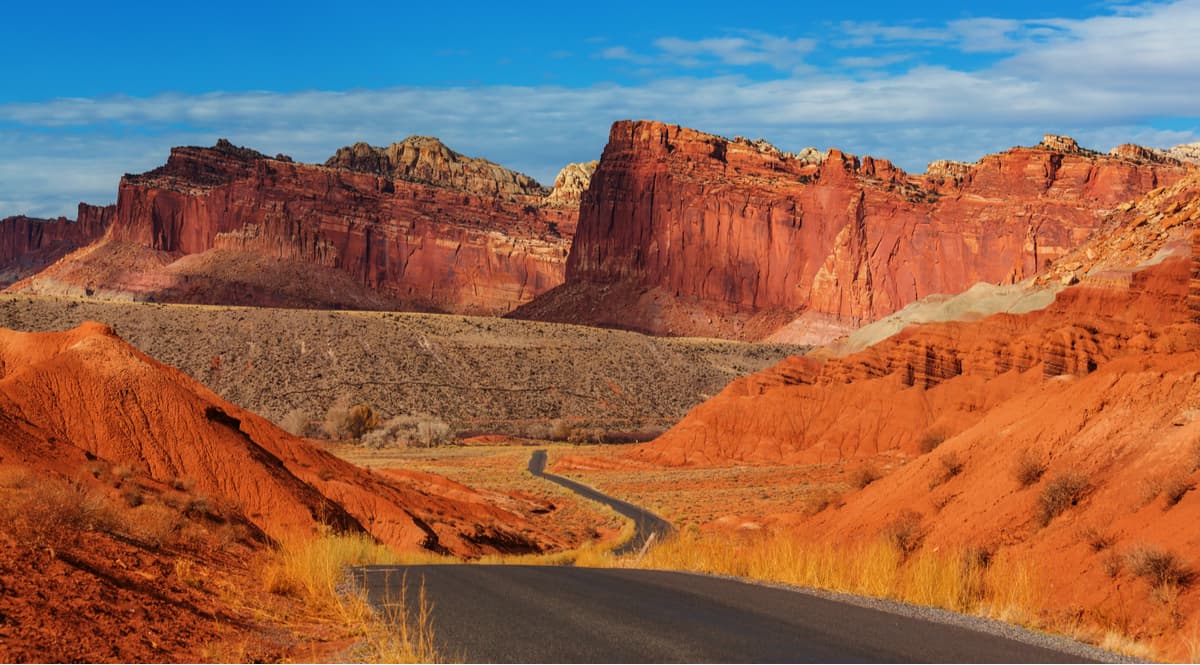 Geologically, Capitol Reef is home to the vast majority of the Waterpocket Fold, a unique warp within the crust of the earth that dates back some 65 million years. Interestingly, Waterpocket Fold is the largest exposed monocline (step-like fold in rock layers) in North America and was likely created when two continental plates collided to form the modern day Rocky Mountains.

Over millions of years, the youngest rocks have eroded away, revealing the brilliantly colored sandstone below, as well as a diverse array of other rock layers and fossils. Although the name of the park might seem a bit odd, Capitol Reef is so named because of its collection of white domes and cliffs made of Navajo Sandstone. These white domes look oddly like the United States Capitol Building and, hence, we have the “Capitol” of Capitol Reef National Park.

As far as the “Reef” goes, it turns out that the Waterpocket Fold forms a large north-to-south barrier that makes overland travel incredibly difficult. The earliest white settlers referred to these ridges as reefs, and so we have Capitol Reef National Park.

Historically, people of the Fremont culture inhabited the area around the Waterpocket Fold starting perhaps as early as the year 1000. Many of these people actually irrigated their maize and squash crops and stored their grain in stone caves made from the black basalt boulders it the area.

By the 13th century, however, many of the people in the Waterpocket Fold area abandoned their settlements, perhaps due to a prolonged drought and moved elsewhere. Some centuries later, the Paiute arrived in the region and now consider the area of Capitol Reef National Park to be their ancestral homelands.

Some of the first white people to visit the area include surveyors from US Army Major John Wesley Powell’s expedition, however, these surveyors and the few others that came after them spent relatively little time within the Waterpocket Fold itself. Indeed, it wasn’t until the missionaries of the Church of Jesus Christ of Latter-day Saints arrived that white settlers began to arrive in the region in droves, pushing the native people out and settling in the Fremont River valley.

As the 1900s came about, however, most settlers had abandoned their homesteads and the region became more and more isolated. The remaining communities more or less disappeared and it was thanks to the efforts of a number of local boosters that the region gained the attention of the federal government and, eventually its national park status. However, in 1937, when Capitol Reef was originally protected, it was designated as a monument that was under the administration of nearby Zion National Park.

After the enlargement of the monument under the Johnson administration in the 1960s, Capitol Reef finally gained its formal status as a National Park under President Richard Nixon in 1971. These days, Capitol Reef remains the least visited of all of the Utah National Parks, behind Arches, Canyonlands, Zion, and Bryce Canyon, thanks to its relatively remote location. However, visitors to the park can find an abundance of different hiking, camping, backpacking, canyoneering, and rock climbing opportunities within Capitol Reef.

Here are some of the major hiking areas in Capitol Reef National Park:

The Rim Overlook Trail is a strenuous 2.3 mile (3.6km) one way hike that takes you up 1,110 feet (338m) of elevation for some fantastic panoramic views of Fruita and the Waterpocket Fold from the top of a cliff.

This strenuous trail covers 2.0 miles (3.2km) of one-way distance and takes you to a nice overlook so you can get great views of both Capitol Gorge and the Golden Throne.

The Frying Pan Trail takes you on a 2.9 mile (4.6km) one-way walk to see both Cohab Canyon and Cassidy Arch, to say nothing of the stunning views you’ll get along the way.

The 0.9 mile (1.4km) moderately rated hike on the Hickman Bridge Trail takes you to see the amazing 133-foot natural bridge, alongside some great views of the canyon.

Aptly named, Sunset Point is a short, 0.4 mile (0.6km) walk to take you to see a nice, panoramic view, which is fantastic at sunset.

Although it’s a bit too far to drive for a day trip, Salt Lake City is just a three and a half hour drive north of Capitol Reef, so it’s a great place to start your adventure. The city is home to a major international airport, as well as a wide variety of different hotels, restaurants, and outdoor stores, so you can stock up here before you head into Capitol Reef.

Moab is a two-hour drive west of Capitol Reef and is a well known paradise for hikers, climbers, and river rafters, so it’s filled with campgrounds, restaurants, and outdoor gear stores. Plus, it’s the gateway to both Arches and Canyonlands National Parks, so it’s a great place to stay if you’re looking to link up all the Utah National Parks in one go. 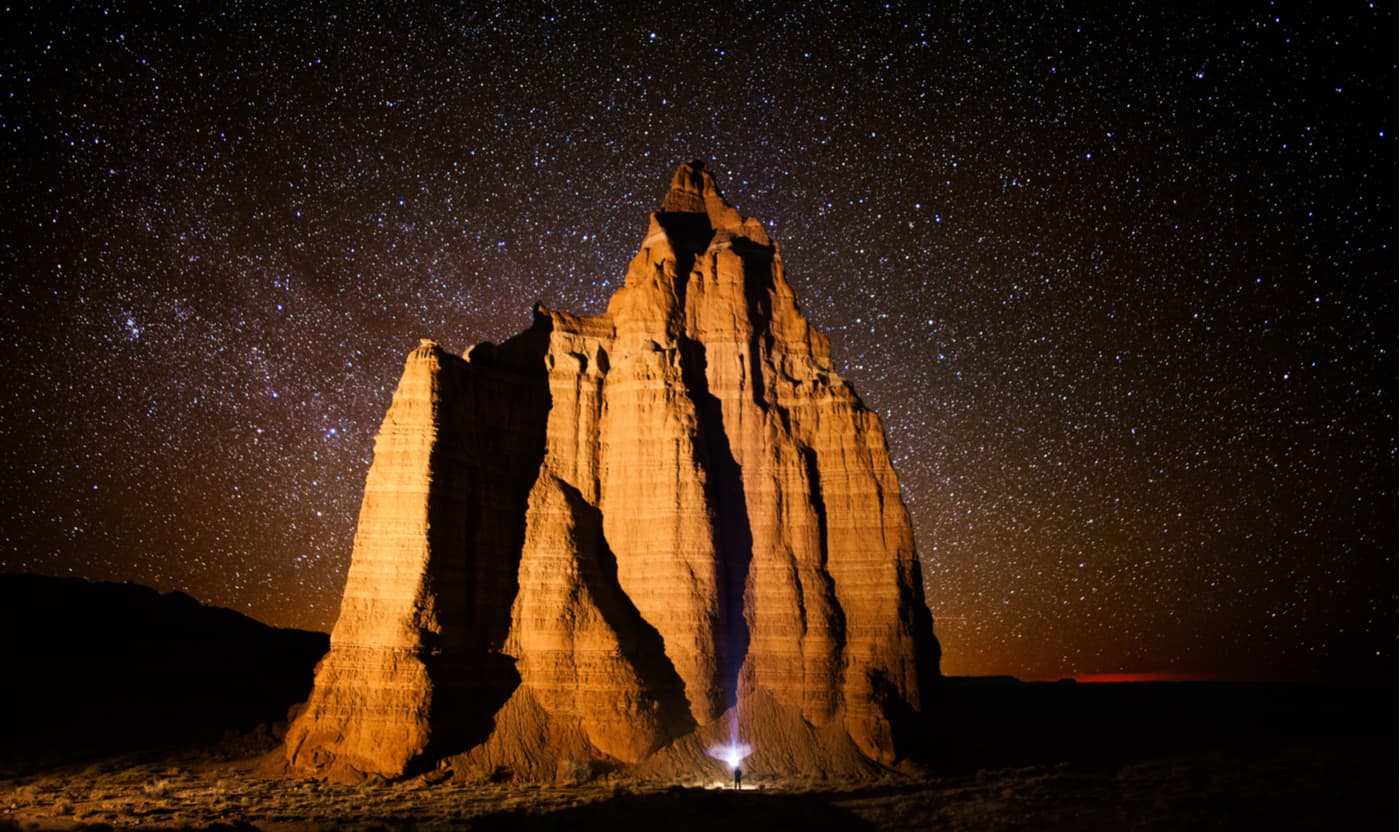 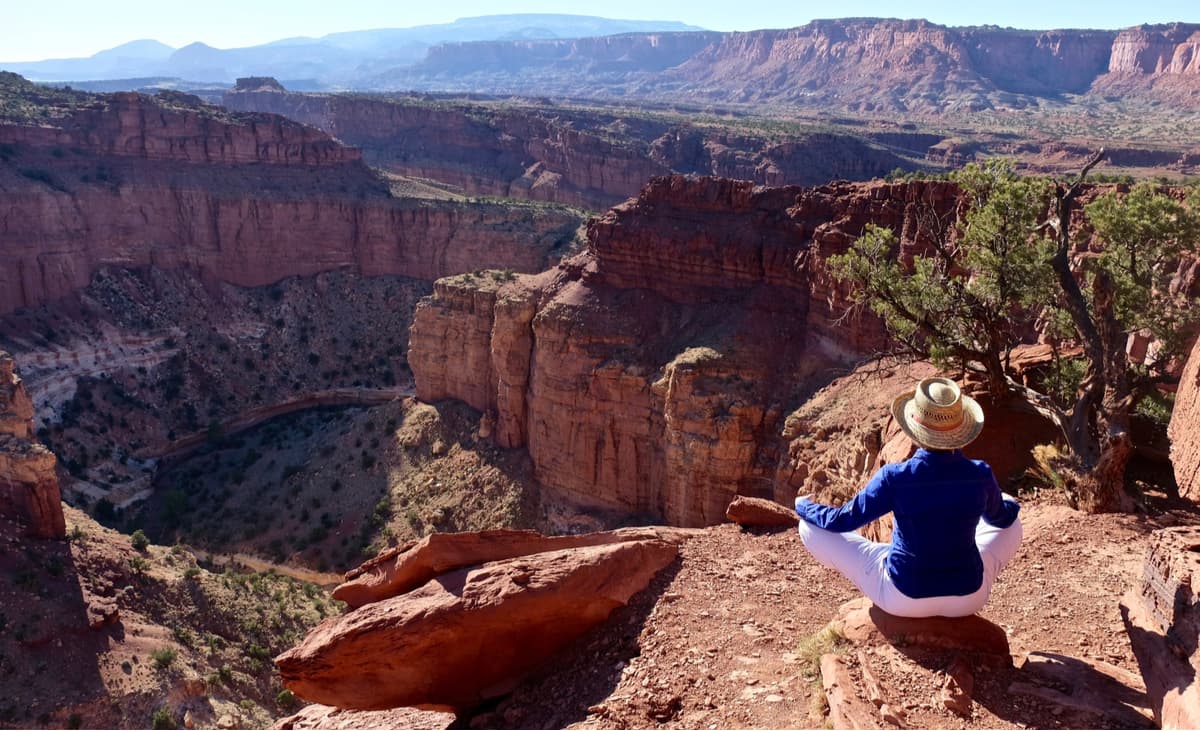 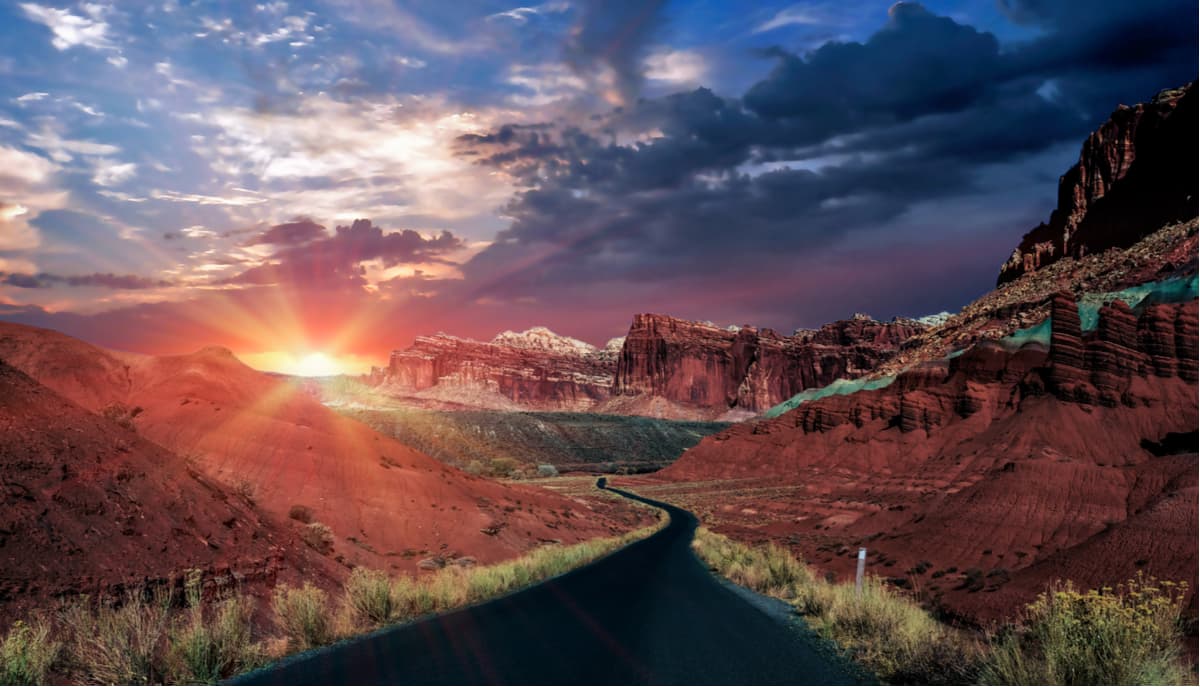 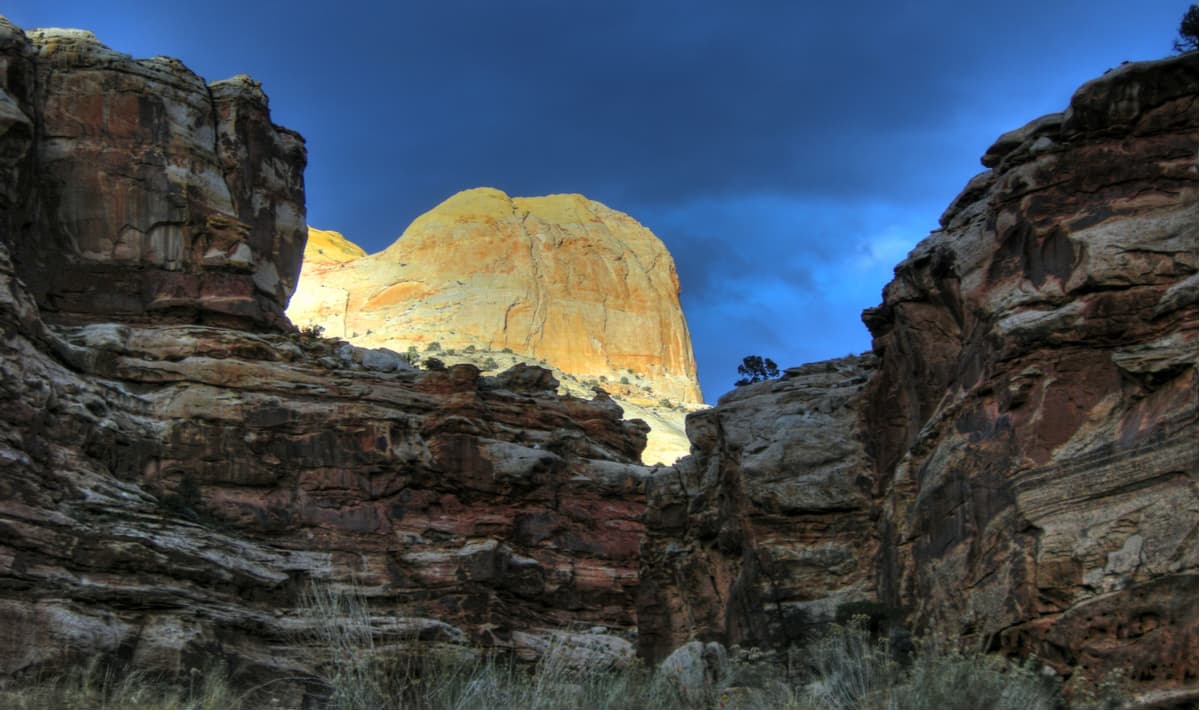 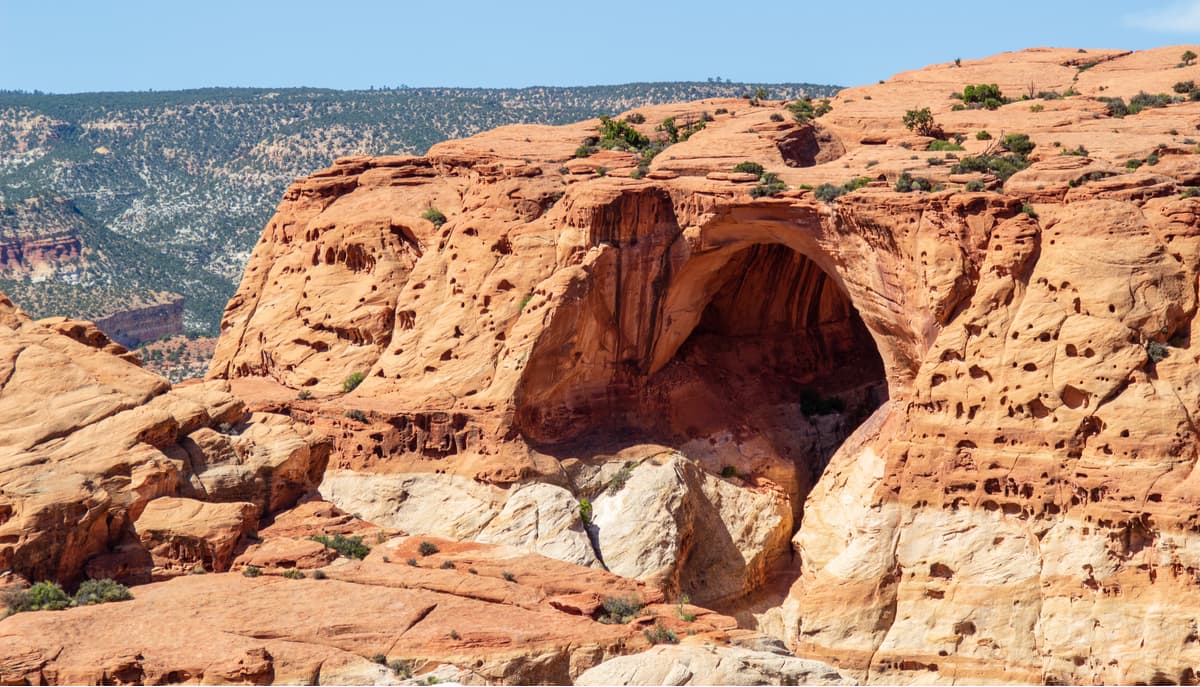 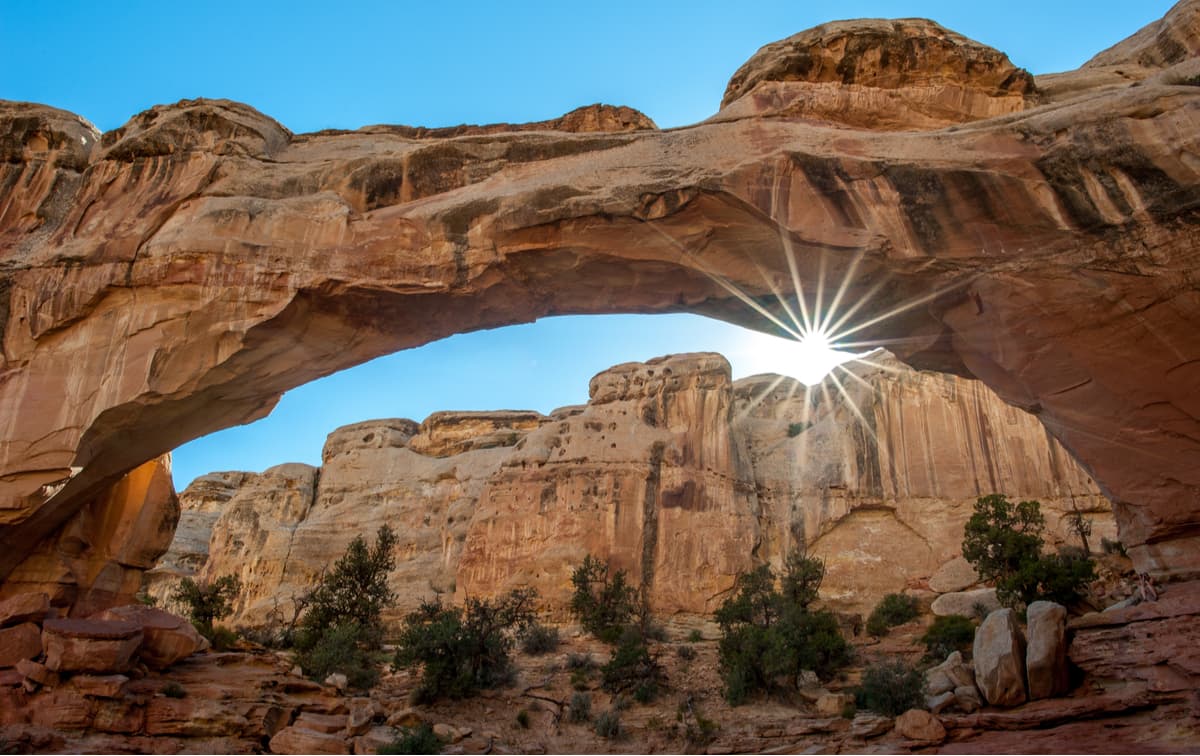