The Black Range is a rugged mountain range located in the southwest portion of the US state of New Mexico. The range contains 82 named peaks and lies almost entirely within the Gila National Forest. McKnight Mountain marks the tallest and most prominent peak in the range at 10,167 ft (3,099 m) tall with 2,526 ft (770 m) of prominence. 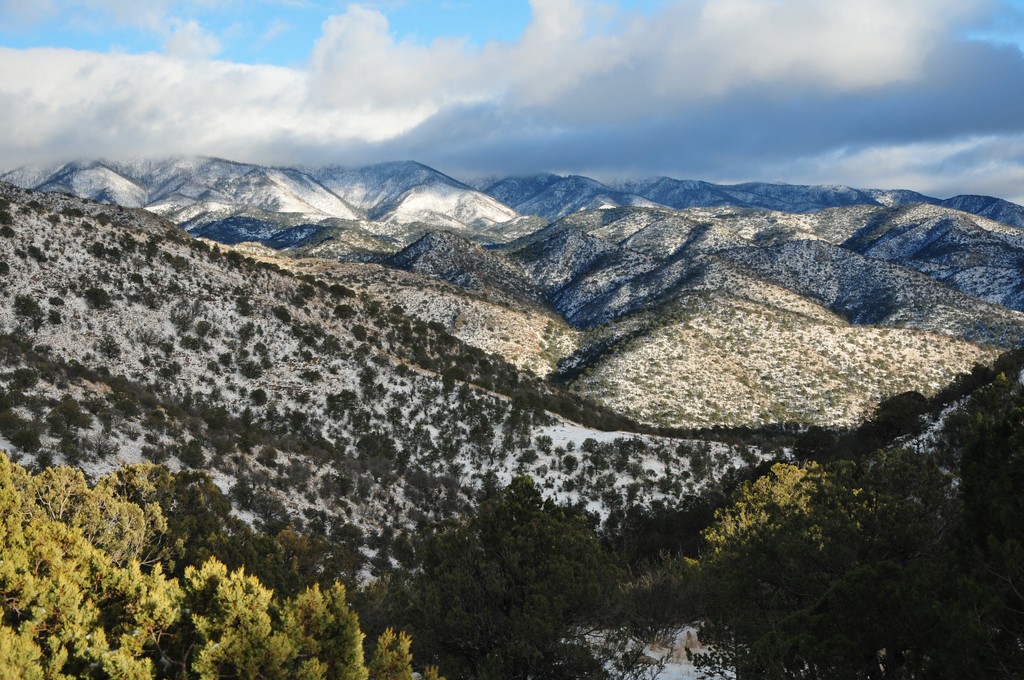 A prominent ridgeline separates the range into distinct western and eastern portions. The range spans approximately 55 miles (88 km) in length from north to south and 18 miles (29 km) in width from east to west.

The Mimbres River originates in the range, fed by the annual snowpack, while the Rio Grande is situated east of the range traveling roughly north to south. A few small towns are scattered amidst the foothills along the eastern edge of the range.

Terrain varies greatly depending on elevations in the Black Range. The foothills feature numerous steep and narrow stream valleys with some measuring up to 1,000 feet (305 m) deep. Elevations in the region range from 4,200 ft (1,280 m) up to the summit of McKnight Mountain.

The lowest elevations feature arid grasslands and desert landscape, giving way to forested hillsides as elevations increase. Densely forested woodlands mark much of the higher elevations along with rocky ridge lines and outcroppings.

The Black Range, along with a vast majority of Gila National Forest, lies within the Mogollon Plateau section of the Colorado Plateau, situated on the Mogollon-Datil volcanic field. Widespread volcanism in the region began around 40 million years ago.

This volcanic field experienced three phases of volcanism over the course of millions of years. These eruptions covered much of the region in an ash sheet. Basin and range extension coupled with faulting formed deep basins throughout the Mogollon Plateau.

These mountain formations allowed the ash sheet to be spread across various elevations in the mountains and valleys. A series of eruptions on the plateau led to the formation of the Black Range along with other nearby ranges such as the Mogollon Mountains (also called the Gila Mountains).

The Black Range and the surrounding region was formed around 25 million years ago. The rivers and streams in the region further carved out the landscape, leaving behind the distinct deep valleys that mark the foothills of the Black Range.

The Black Range is home to a wide range of flora and fauna throughout its varying elevations.

The surrounding network of national forest and wilderness areas allows many species to thrive. Gila National Forest, including a portion in the Black Range, is home to one of the world’s largest stretches of healthy ponderosa pine forest.

Lower elevations, along the eastern foothills of the range, feature a desert landscape along with arid grasslands. Pinyon-juniper woodlands and oak trees are prominent at elevations up to 7,000 ft. At elevations above 7,000 ft (2,134 m), the range is populated by a mix of fir, aspen, ponderosa pine, and spruce.

Larger animals in the region include elk, black bear, bobcat, and coyote. Other animals that roam the region include mule deer, white-tailed deer, fox, ringtail cat, and raccoon. Common bird species include the wild turkey, peregrine falcon, and the threatened mexican spotted owl.

Sections of the range are home to multiple species of reptiles. Some of the most common species include the rock rattlesnake and black-tailed rattlesnake. The rivers in the region are populated by brown trout, rainbow trout, Gila trout, and bass.

The land within and surrounding the Black Range has been inhabited by humans for thousands of years. This land marks part of the traditional territory of Mongollon culture. The Mongollon culture represents the Indigneous peoples that lived throughout present day Arizona, New Mexico, and northern Mexico.

The boundaries of the modern day Gila National Forest, marks part of the ancestral homelands of the Mimbres people who lived in the region until around 1150 CE. Multiple Mimbres cliff dwellings lie within the nearby Gila Wilderness, just west of the range.

The land surrounding the Black Range marks part of the traditional territory of the Chiricahua people. Today there are multiple Chiricahua tribes in the US, including the Fort Sill Apache Tribe, the San Carlos Apache and the Mescalero Apache Tribe. All of these tribes maintain reservations that mark a small fraction of their traditional territory.

The first people of European descent to explore the region arrived during the seventeenth and eighteenth centuries. The Spanish colonized large swaths of land in present-day New Mexico and established numerous ranches and missions in the area.

During the eighteenth century the Spanish also established multiple copper mines in the mountains of southwestern New Mexico. Following the Mexican War of Independence, the land was ceded to Mexico.

The Mexican-American War ended in 1848, resulting in the land being ceded to the United States. Over the following decades the region became a popular destination for settlers heading west. Many of the contemporary towns and villages near the range were originally established during the end of the 1800s.

Despite their continual efforts, the Indigneous peoples of the region were repeatedly attacked and killed, with those who remained being forced onto reservations as the population of settlers continued to grow.

Widespread logging and mining had destroyed much of the region’s natural beauty and threatened the ecosystems of the area. The Gila Forest Reserve was established in 1899 in an effort to protect the region’s resources.

The Gila National Forest was eventually created in 1907, and was later expanded over the following decades. In 1924 the Gila Wilderness was established followed by the creation of the Aldo Leopold Wilderness in 1980.

The Black Range is home to numerous trails and hiking opportunities. Here are some of the top hiking areas to visit in the range:

True to its name the Black Range Crest Trail follows along the main ridgeline within the Black Range. The out and back hike climbs steeply in the first few miles with the middle portion of the route featuring minimal amounts of elevation changes.

Hikers pass through some of the varying landscapes in the range including creeks, forested patches, and viewpoints throughout. This out and back trail is 18.4 miles (30 km) in length and features 3,661 ft (1,116 m) of total elevation gain.

The Railroad Canyon Trail is situated in the southern portion of the Black Range. The route climbs steadily throughout, following along the canyon and features numerous seasonal creeks and streams.

Much of the route is forested with open patches throughout. This out and back trail marks the beginning of the Black Range Crest Trail and offers a shorter hiking route. The trail is 7.8 miles (12.5 km) round trip with 1,154 ft (352 m) of total elevation gain.

The McKnight Canyon Trail begins by dropping in elevation down into the canyon itself. The trail follows the canyon along with the East Fork of the Mimbres River. At higher elevations the forested patches begin to thin, giving way to more sweeping views of the range.

Hikers also pass through a section of land that was previously burned in a wildfire. The turnaround point of the trail is marked by a small waterfall that cascades down the smooth rocks. This out and back route is 11.5 miles (18.5 km) long and features 1,669 ft (509 m) of total elevation gain.

Looking for a place to stay near the Black Range? Here are some of the best cities and villages to check out in the region:

The small community of Silver City lies just southwest of the range, along the edge of Gila National Forest. Home to around 10,000 residents, the city has a long history of copper mining, dating back to the arrival of the Spanish conquistadors.

Despite its relatively small size, Silver City hosts numerous festivals and events each year including Pickamania, Silver City Blues Festival, and the Southwest Festival of the Written Word.

Situated along the edge of the 3.3 million acres of Gila National Forest, Silver City has become a hub for outdoor recreation. Close by lie the Gila Cliff Dwellings and numerous other historical sites. The downtown streets are lined with local shops, restaurants, and art galleries.

Las Cruces lies to the southeast of the Black Range. Home to around 111,000 residents, it marks the closest major city to the range and the largest city in southern New Mexico.

An economic and geographic hub for Mesilla Valley, Las Cruces is home to numerous festivals each year. Some of the most popular events include the Harvest Wine Festival, Southern New Mexico Wine Festival, and an annual Day of the Dead celebration.

Besides its close proximity to Gila National Forest, the city is also near White Sands National Park, Organ Mountains–Desert Peaks National Monument, and Prehistoric Trackways National Monument. Those interested in learning more about the region can visit the Branigan Cultural Center, Gadsden Museum, and Las Cruces Museum of Art. 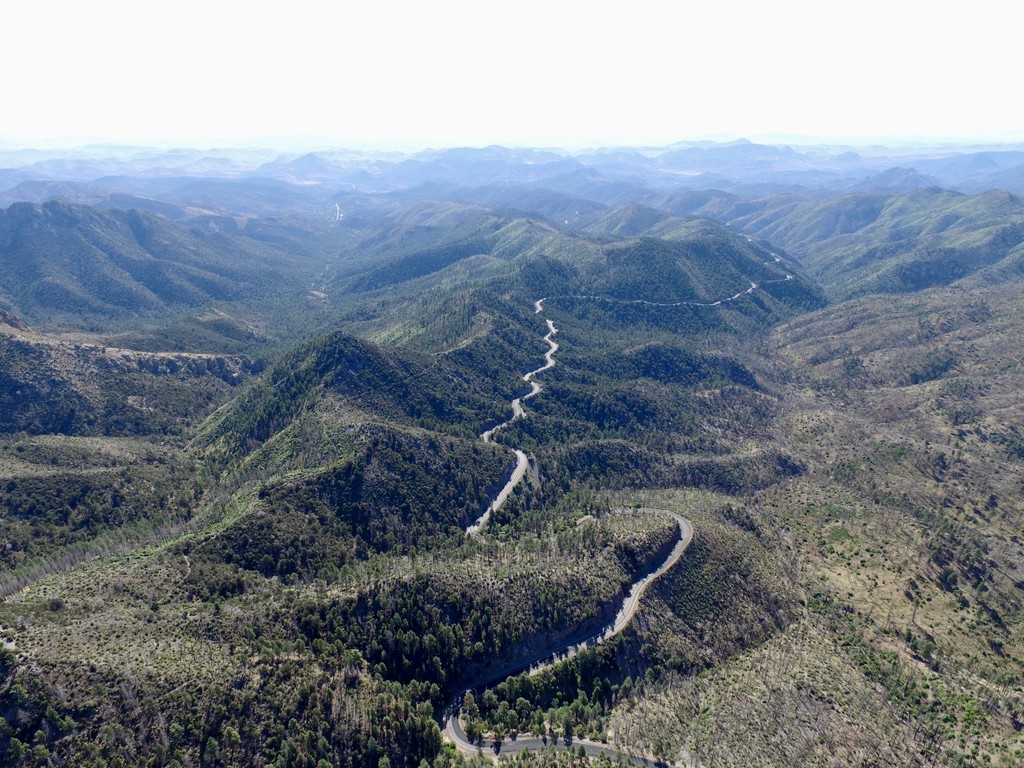 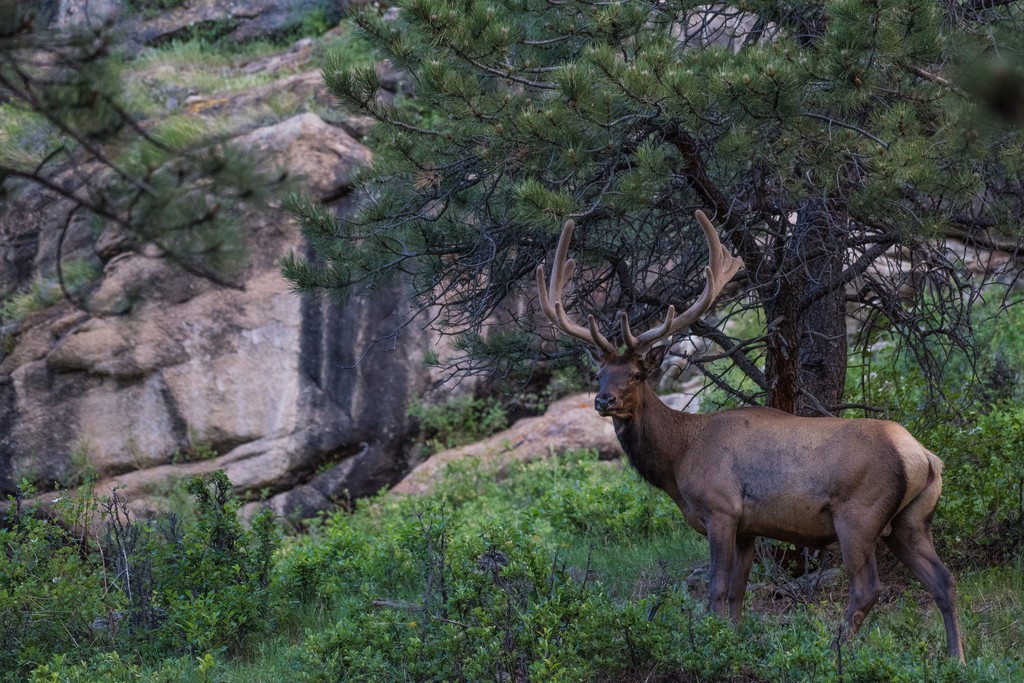 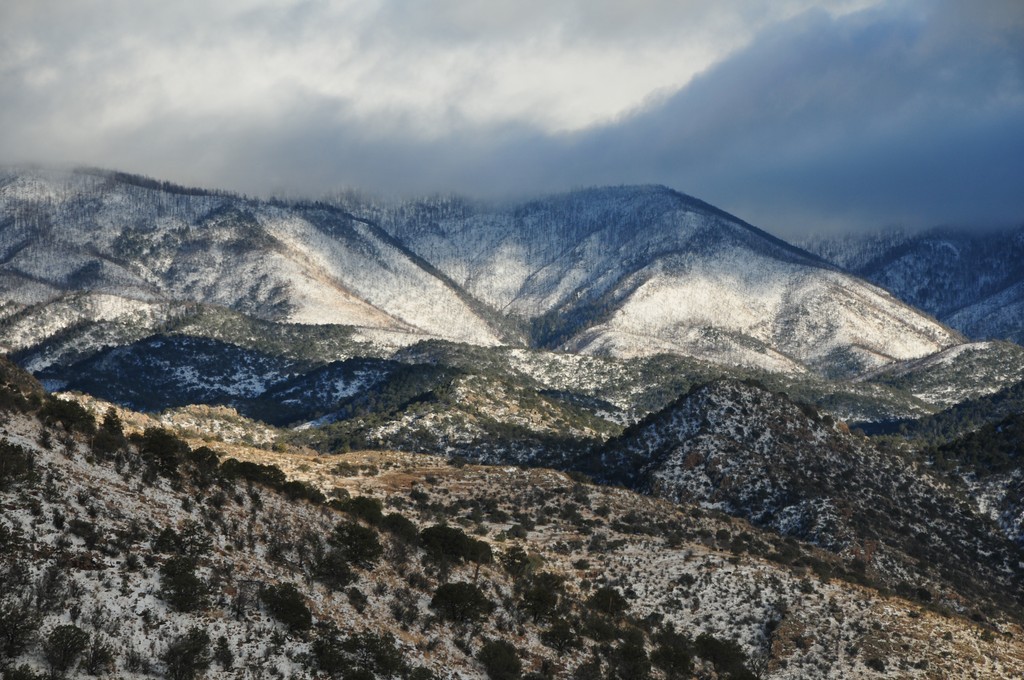 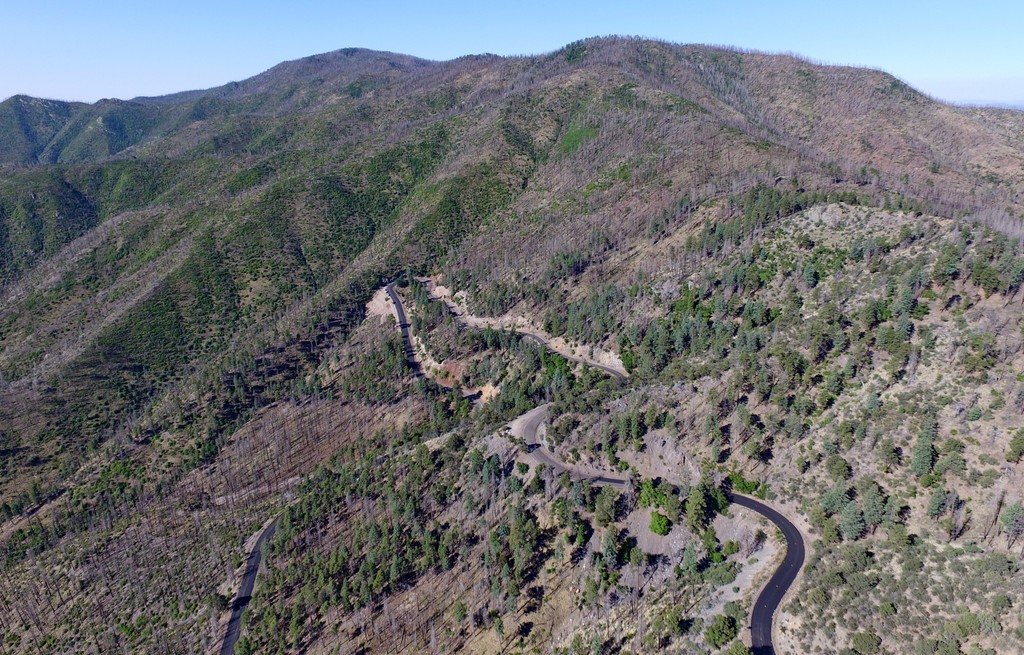 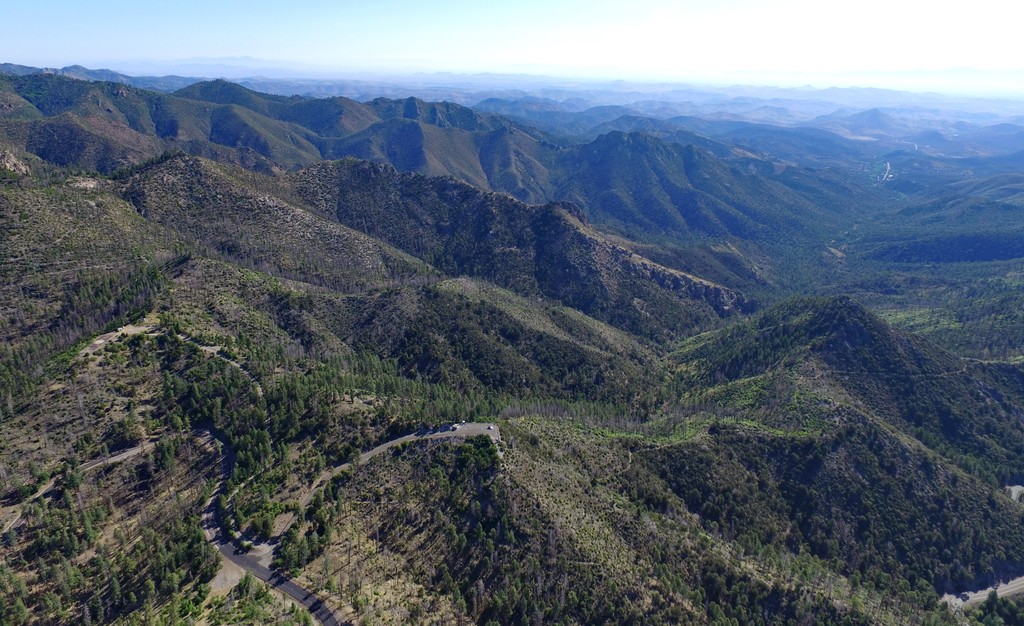