The Ammergau Alps (German: Ammergauer Alpen or Ammergebirge) is a stunning mountain range situated along the border between Germany and Austria. The range lies on the edge of the Alps and features less dramatic changes in elevation as other sections of the Alps. This range features 379 named mountains with the tallest and most prominent being Daniel at 2,340 m (7,677 ft) tall with 1,230 m (4,035 ft) of prominence. 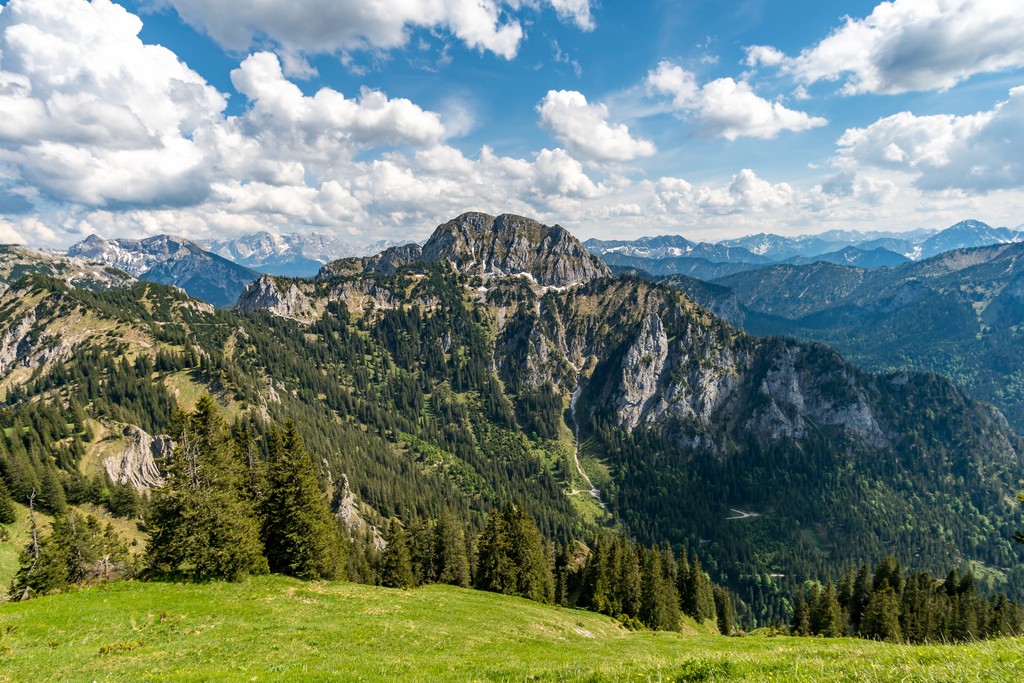 The Ammergau Alps are a cross border chain of mountains situated in the Free State of Bavaria, Germany and the state of Tyrol (Tirol), Austria. A majority of the range lies within Germany with a small portion in Austria.

Ammergau Alps span roughly 30 km by 30 km (19 X 19 miles) across the region. The peaks mark a subrange of the Northern Limestone Alps, and are situated on the outer edge of the greater Alps range which extend to southwest.

Since the peaks are on the outskirts of the Alps, they feature less dramatic changes in elevation and shorter mountains when compared to nearby subranges. A majority of the peaks can be accessed via a day hike from the surrounding valleys.

The Ammergau Alps Nature Reserve lies within the range, situated fully on the German side. Small towns are scattered along the perimeter of the range within both countries. Compared to other nearby ranges, the Ammergau Alps feature minimal amounts of alpine huts.

Amidst the peaks lie roughly two dozen boggy regions. Though geographically part of the Alps, the region appears as foothills, featuring rolling hillsides and lush flora throughout a majority of the year.

The Ammergau Alps are surrounded by numerous areas for outdoor recreation. Within the range lies the Ammergau Alps Nature Reserve and the Allgäu High Alps situated to the west. The Karwendel und Karwendelvorgebirge lies to the east while the Karwendel Nature Park is to the southeast in Austria.

The Ammergau Alps span across Germany and Austria, marking a subrange of the Northern Limestone Alps. All of the surrounding ranges, including the Ammergau Alps, are part of the greater European Alps.

Despite being part of the Northern Limestone Alps, the peaks within the Ammergau Alps are primarily composed of dolomite. There are small sections of plattenkalk though dolomite underlies much of the southern region.

The northern stretches of the range features dolomite and Wetterstein limestone. This higher presence of limestone has made craggy peaks and ridgelines more common in the northern portion of the range.

Peaks in the region, and the rest of the Alps, began forming during the Alpine Orogeny. This major mountain building event occurred as the African and Eurasian tectonic plates collided with one another. Around 65 million years ago, this collison began the uplift of the Alps.

The Ammergau Alps lie on the northerneastern side of the Alps, which experienced less pressure from this collision, resulting in the more gradual slopes.

Widespread glaciation carved out the landscape, leaving behind some of the rugged peaks and sweeping valleys visible today. Rivers and streams throughout the region continue to slowly erode the range’s many valleys and gorges.

The lower elevations found in the range have given the Ammergau Alps slightly different flora and fauna compared to nearby subranges of the Northern Limestone Alps.

Raised bogs and fens are common throughout the range, with some sections of bog being harvested. While there are some forested sections, much of the range features rolling pastures and grassy hills. Matgrass meadows, wet meadows, and calcareous grasslands are common along with reed grass and pine woods.

Cows and sheep can be spotted roaming in the lush pastures of the region. Deer and marmot are both common along with various small rodents. This region provides an important home for the rock ptarmigan, capercaillie, and birch grouse.

The land surrounding the Ammergau Alps has been inhabited by humans for thousands of years. This region is thought to have first been settled during Roman times.

The Via Claudia Augusta is an ancient Roman road that passed through the region, bringing people to the area who would later settle along its route. The surrounding region was part of the Raetia province during this time.

During the third century, the Alamanni people began to expand throughout the region, after having traveled east of the Rhine into the pre-Alps of present day Germany. The Swabia culture expanded throughout the area and during the rule of the Holy Roman Empire.

The town of Füssen became the location for the summer home of prince-bishop of Augsburg. In the ninth century the town was also the birthplace of the Benedictine monastery of St. Mang (Magnus of Füssen).

The Swabian League was formed in 1488 and ruled over the foothills region. The Reformation resulted in the league being disbanded in 1534.

Bavaria became a kingdom in 1806 after Napoleon abolished the Holy Roman Empire. During this time Tyrol and Salzburg were reunited with Bavaria though they were ceded to Austria in 1815 following the Congress of Vienna.

Bavaria was able to remain independent during the North German Confederation of 1867. However, when France declared war on Prussia in 1870, Bavaria joined forces with the rest of Germany, ultimately joining the German Empire in 1871.

Neuschwanstein Castle, which lies just outside of Füssen, is a historic palace that was constructed during the late nineteenth century. Intended to be a private residence for King Ludgwig II of Bavaria, the castle was not completed until after his death. Instead, the palace has since been open to the public for visits.

Following World War I, Bavaria became known as the Free State of Bavaria after the abolition of the monarchy. The Ostallgäu district of Bavaria was established in 1972 after the districts of Kaufbeuren, Marktoberdorf and Füssen were merged together.

The Ammergau Alps are home to a plethora of hiking trails, with many options being less strenuous than hikes in the nearby subranges. Here are some of the most popular trails in the park:

This hike begins in Hohenschwangau and climbs steadily through the forested foothills of the region. After a little over a kilometer into the hike, the trail passes along the stunning Neuschwanstein Castle which is open to the public.

The trail then continues upwards into the surrounding hills, offering hikers a breathtaking view of the castle and the rolling hills and lakes that surround it. The out and back route is 6.8 km (4.2 miles) in length and features 365 m (1,197 ft) of elevation gain.

Kramerspitz is the sixth most prominent peak in the Ammergau Alps, situated along the eastern edge of the range. The loop trail to the summit climbs through the densely forested hillside before climbing above the treeline.

Once hikers reach the main ridgeline, they are rewarded with panoramic views of the Ammergau Alps and Garmisch-Partenkircher down below. This loop trail can be completed in either direction. It is 16.6 km (10.3 miles) in length and features 1,275 m (4,183 ft) of total elevation gain.

This loop trail lies just outside the community of Oberammergau. Throughout the climb to the summit of Kofel, hikers will notice historical objects originally found at Döttenbichl and dating back to 15 BCE.

From the summit of Kofel, hikers have views of Pulvermoos and Weidmoos, both moors created from a glacial lake during an Ice Age. This loop trail is 8.7 km (5.4 miles) and features 653 m (2,142 ft) of elevation gain.

Looking for a place to stay near the Ammergau Alps? Here are some of the best cities and villages to check out near the range:

Füssen lies along the western edge of the Ammergau Alps, less than one kilometer from the Austrian border. Nestled into the foothills of the Alps, Füssen is best known for its close proximity to the Neuschwanstein Castle and its violin manufacturing.

Home to around 15,000 residents, the history of Füssen dates back over 700 years. The town is situated along the Lech River which flows into the Forggensee, a man-made lake.

Füssen marks one of the southernmost towns in Germany, providing easy access to Austria. Some of the most popular sites in the region, besides Neuschwanstein Castle, are the High Castle, St. Mang Basilica, and the Füssen Theater.

With a metropolitan area of 1.5 million, Munich is the third largest city in Germany. Munich is a cultural and economic hub for southern Germany and home to over 80 museums. The city also boasts the world’s largest beer garden. A popular attraction is the Hofbräuhaus Brewery; a beer hall which dates back to 1589.

Despite its large size, Munich is located near the most mountainous region in the country, the Bavarian Alps. The city offers easy access for day trips to the mountains of southern Germany and popular sites such as the Ammergau Alps Nature Park. 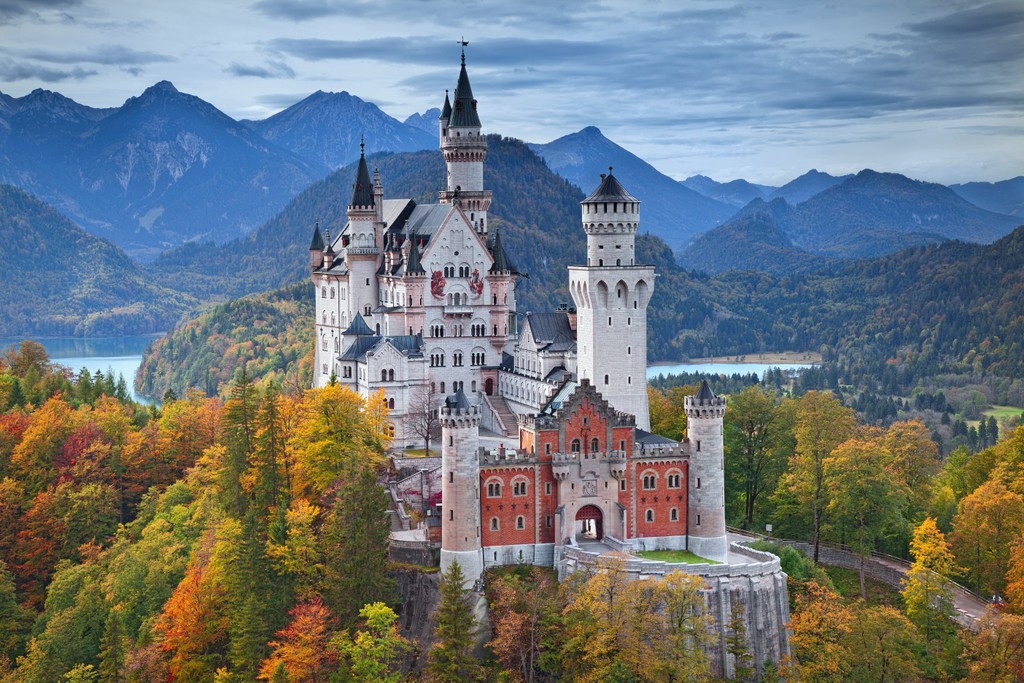 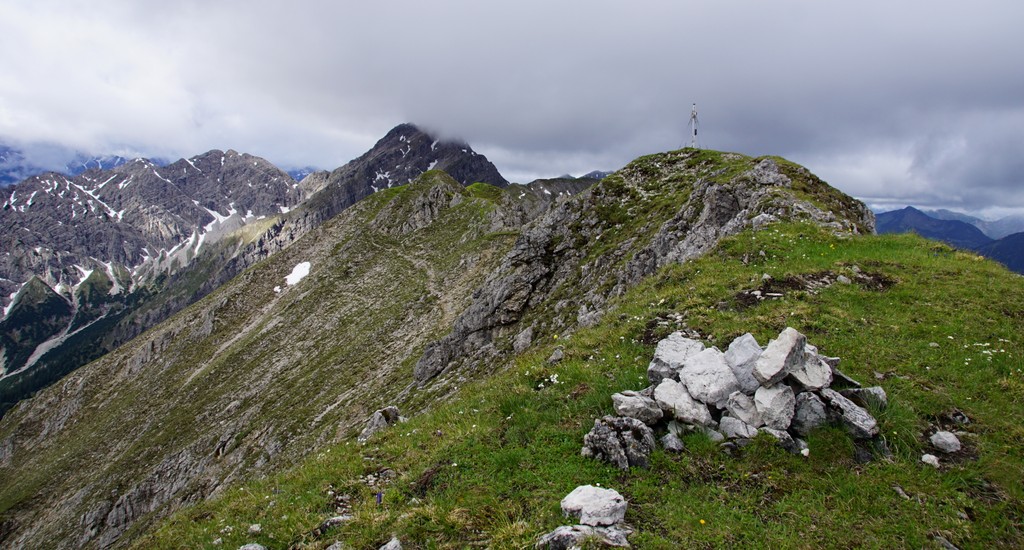 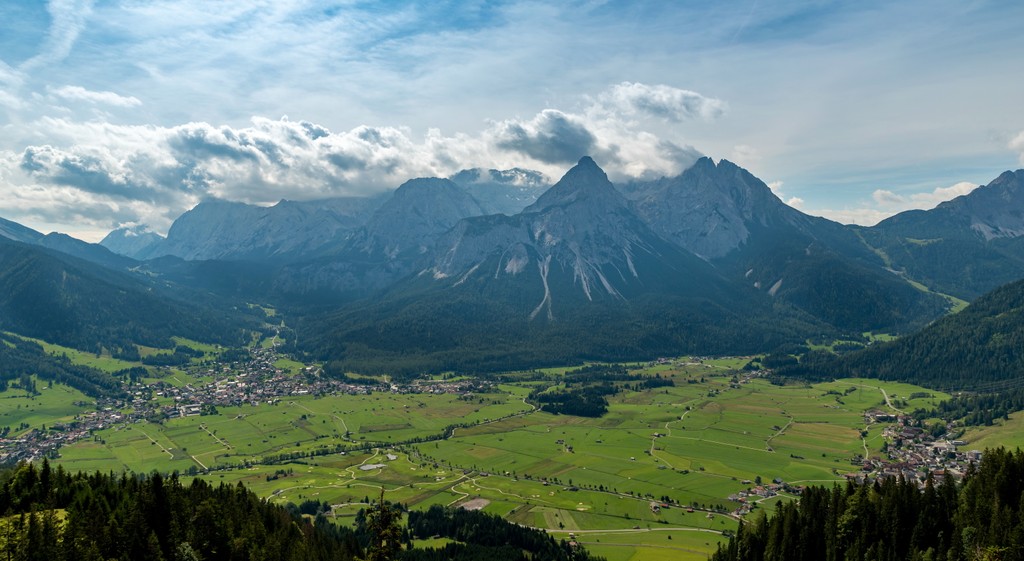 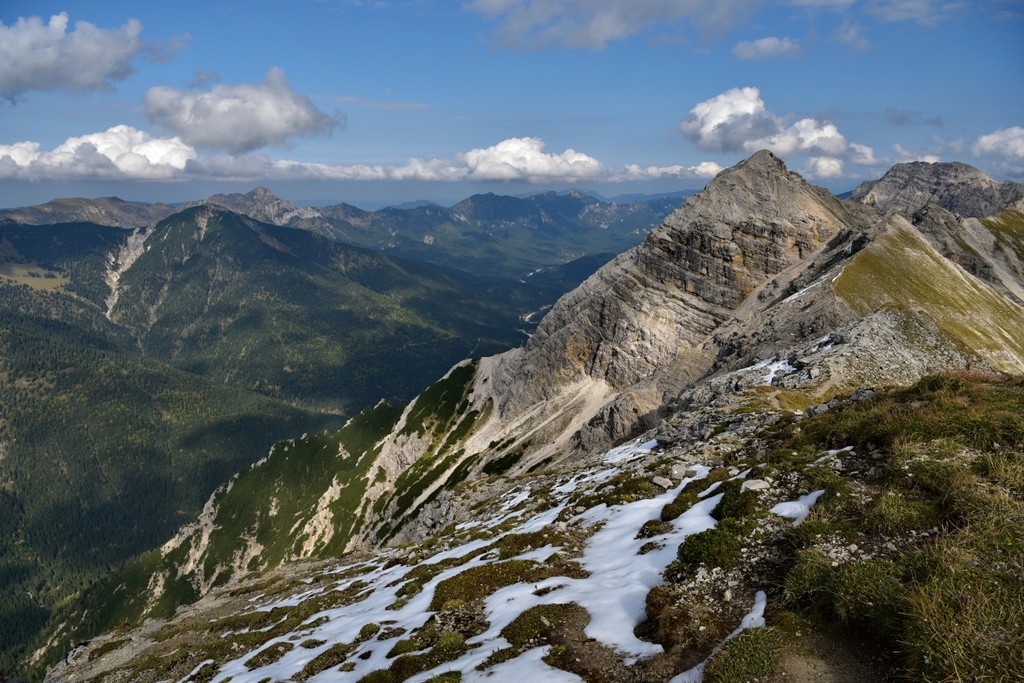 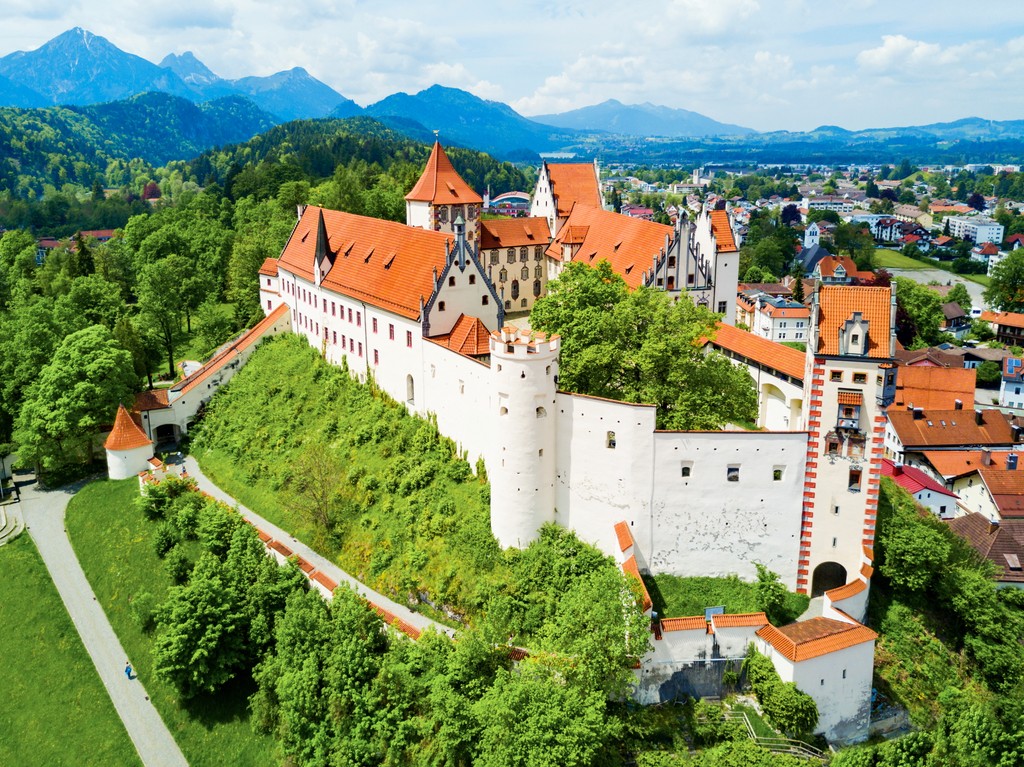 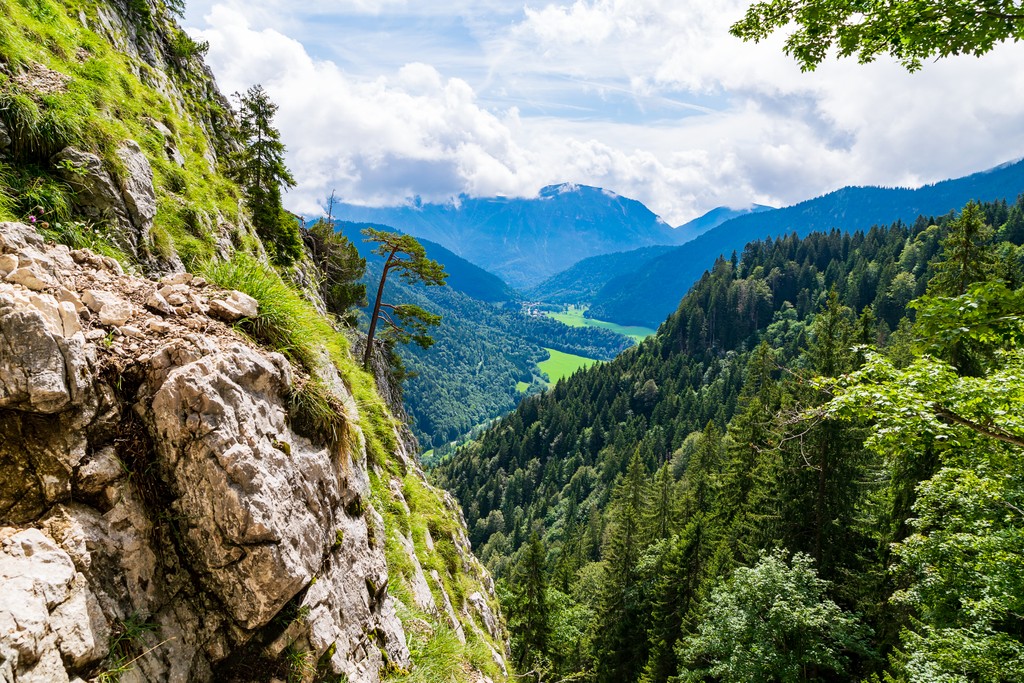 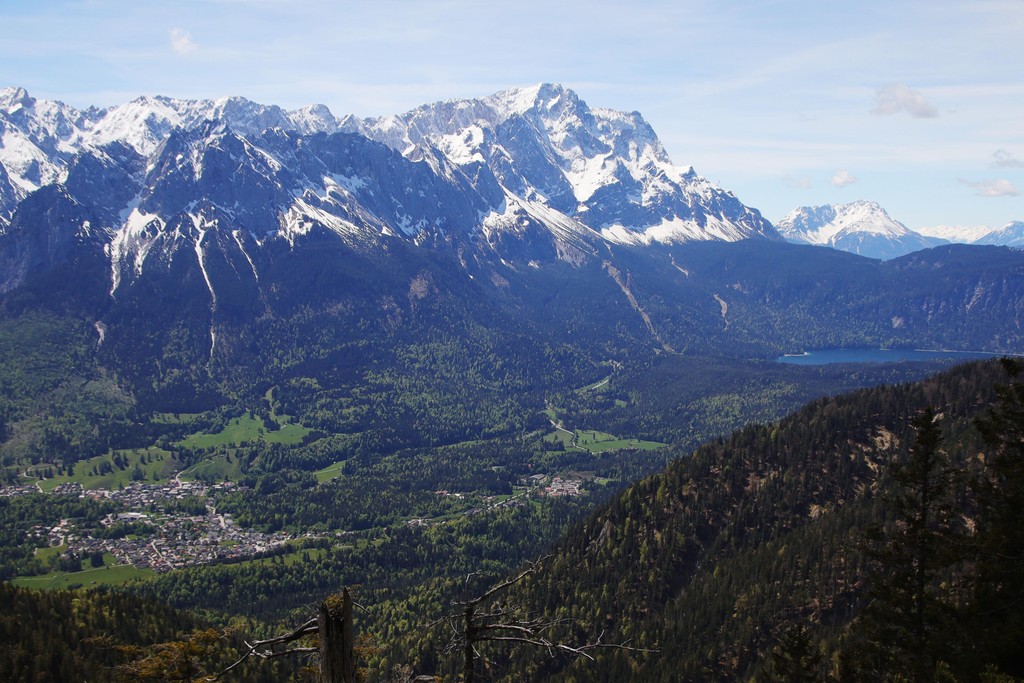 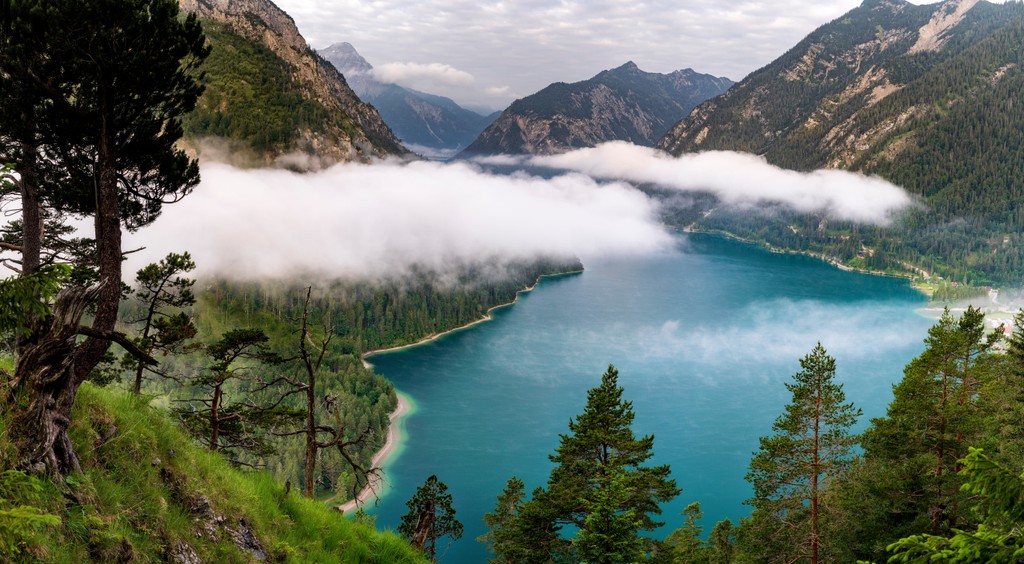