Home to rugged peaks, towering coast redwoods, and glistening rivers, the Ventana Wilderness is located along the Central Coast of the US state of California. It contains 86.9 sq. mi (225 sq. km) of land and is home to 23 named mountains, highest and most prominent of which is Junipero Serra Peak (5,869ft/1,789m).

The wilderness surrounds the smaller Julia Pfeiffer Burns State Park. It is bordered to the south by US Army Garrison Fort Hunter Liggett and the Silver Peak Wilderness. To the east is the western edge of the Central Valley, as well as Pinnacles National Park and Garland Ranch Regional Park. The northern section of the Ventana Wilderness is bordered by the Carmel Highlands, Point Lobos State Marine Reserve, and Point Lobos Ranch.

It covers a majority of the region known as “Big Sur, which stretches between the Carmel Highlands and San Simeon. The region is often considered to be one of the longest stretches of undeveloped coastline left in the contiguous United States.

State Route 1, also known as the Big Sur Coast Highway, borders the area to the west, snaking its way through the many twists and turns of the valleys and mountains in the region. The highway is considered to be one of the most beautiful roads in the country and is often compared to the road that traverses along the Amalfi coast just south of the Apennines in Italy.

The mountains in the Ventana Wilderness are part of the Santa Lucia Range, which is a section of the California Ranges. Geologically, these mountains formed as a result of tectonic activity throughout the region, particularly along the San Andreas Fault.

Most of the basement bedrock of the region is Salinan Block granite, which formed as part of the Sierra Nevada Batholith. The batholith also forms the bedrock of much of the Sierra Nevada. Additionally, there are some Mesozoic-aged granites and pre-Cretaceous metamorphic rocks in the region, as well as some parts of the Franciscan complex, which is also found in the San Rafael Mountains.

The Ventana Wilderness is best known for its very sharp, steep ridges and V-shaped valleys. One of the most notable land features in the region is the Ventana Double Cone, which may have once been a natural arch.

The Ventana Wilderness and the Big Sur region has a unique mix of different climates, thanks to its variable topography. For the most part, the region is covered by chaparral, including species such as chamise, manzanita, and ceanothus.

However, there are some oak woodlands and pine woodlands dispersed throughout the region. Visitors should also be on the lookout for poison oak, which is abundant in the wilderness.

The Ventana Wilderness is also home to a number of large rivers, including Big Sur River, which was designated a National Wild and Scenic River in 1992. The river provides fertile enough soil to support stands of coast redwoods, sycamore, and big leaf maple. There are also some small stands of the rare and endemic bristlecone fir at the bottom of a few canyons.

As far as wildlife goes, the region is home to bobcats, black bears, foxes, coyotes, deer, and mountain lions. Lucky visitors can also see the California condor flying overhead, which is known to nest both in Pinnacles National Park and within various sanctuaries, most notably the Sespe Condor Sanctuary.

The region that is now the Ventana Wilderness has been home to humans since at least 3,500 BC. A number of groups, including the Esselen, Salinian, Ohlone, and Costanoans, lived throughout the Big Sur region, subsisting off of the sea life in the winter and moving further inland during the summer months.

Spanish sailor, Juan Cabrillo, was the first European to visit the area, having sailed up the coast of California in 1542. However, despite the fact that they did not land, Cabrillo did note the beauty of the region and the staggering height of the mountains, which rise up from the sea.

Some two centuries later, Gaspar de Portolá led an expedition, which brought Europeans to the Big Sur for the first time, eventually making it to Monterey Bay after a month of difficult travel. The establishment of the California Missions in 1770 ultimately led to the destruction of the native communities in Big Sur, as many of the native people were forced into labor or killed by violence, or by introduced European diseases.

Due to the ruggedness of the landscape, the Big Sur region and the Ventana Wilderness have mostly escaped widespread human settlement. Although there are a few small settlements located along Highway 1, the majority of the area is protected land.

These days, the region is one of the most popular tourist attractions in California, routinely recording as many visitors as Yosemite National Park. However, the Ventana Wilderness and Big Sur have limited services and the very narrow two-lane highway is often backed up for miles during the busy summer season.

Although the towns in Big Sur are very small, there are a few hotels, lodges, restaurants, and stores along Highway 1. In addition to the abundance of hiking trails in the Ventana Wilderness, people flock to the region to enjoy its stunning beaches and rock formations.

Here are some of the most popular hiking destinations in the Ventana Wilderness:

The Pine Ridge Trail is one of the most popular hikes in the entire Big Sur Region, thanks to its stunning and diverse landscape and great camping opportunities. The trail also brings hikers to Sykes Hotsprings, which is a good place to relax in the middle of the summer.

However, the Pine Ridge Trail has seen some serious damage in recent years and is currently closed to the public, though it is worthy of inclusion on our list because of its overwhelming popularity. The National Forest Service is in the process of assessing the damage and creating a plan for a potential reopening in the near future, so it is worth checking in on trail conditions before planning your trip.

The Carrizo Trail is a historically important trail, as it used to be the main walking path that connected homesteading families in Big Sur to the towns of Jolon and King City prior to the construction of Highway 1. Hikers can access the trail at Wagon Cave Plains and climb up to scenic ridges. The Carrizo Trail offers good connections to the Gamboa Trail, Vicente Trail, and the Stone Ridge Trail.

The Stone Ridge Trail gives visitors a chance to experience all that Big Sur has to offer. It includes great views, sparkling rivers, and old-growth redwood forests. Hikers along the trail can also use the Vincente Flat and Gamboa Trails to circumnavigate Cone Peak.

Outside of the campgrounds and small hotels within the Big Sur region, here are some of the best places to stay before or after your trip to the Ventana Wilderness:

San Luis Obispo is a city of over 270,000 people that’s located just south of the Ventana Wilderness. It is one of the oldest European-founded communities in California and is a cultural hub of the region.

Travelers coming from southern California will drive through San Luis Obispo on US Route 101 on their way to Big Sur. The city also has a regional airport and good train service along the Amtrak Pacific Surfliner line.

Monterey is located to the north of the Ventana Wilderness and on the edge of Monterey Bay. It has about 30,000 residents and is home to a world-famous aquarium.

The city is a good stopping point for visitors to Big Sur that are traveling from points north, including the San Francisco Bay Area. Travelers will have to drive through Monterey on the way to the Ventana Wilderness. Additionally, Monterey has a small regional airport with good service around California and some major cities in the western United States. 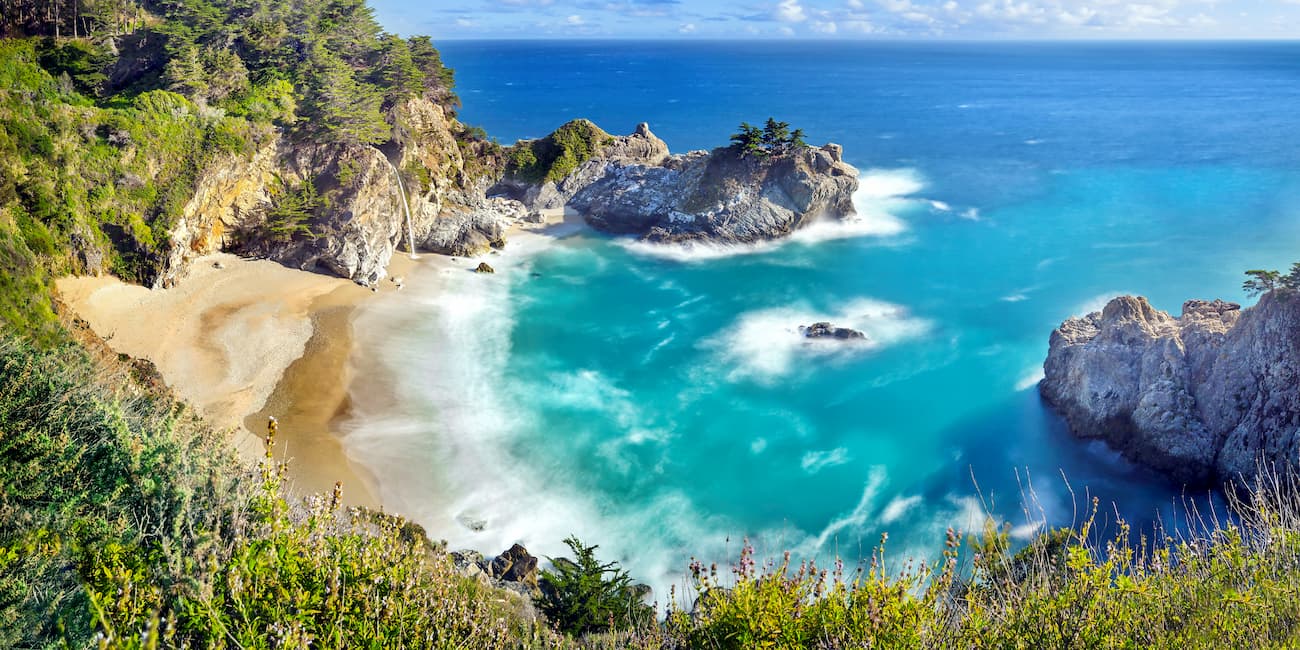 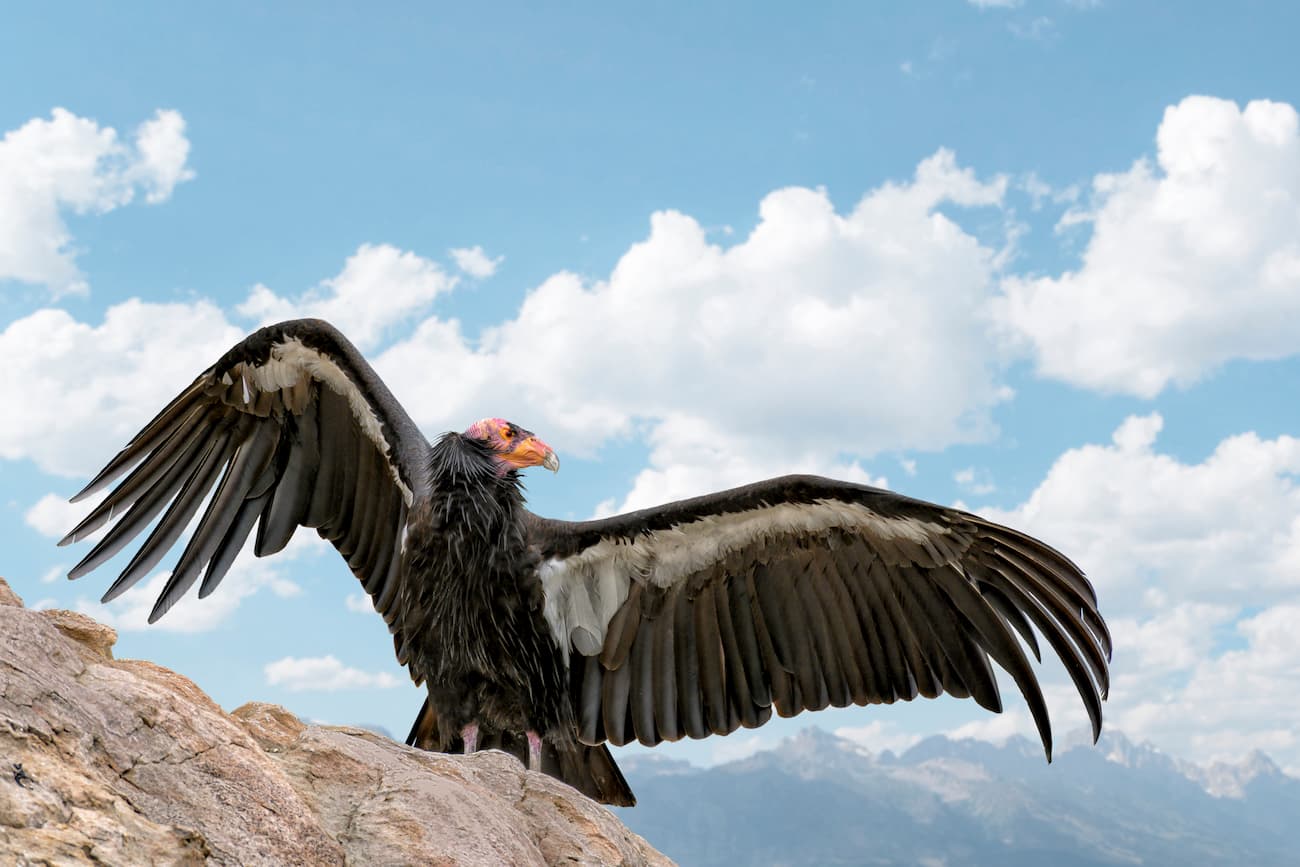 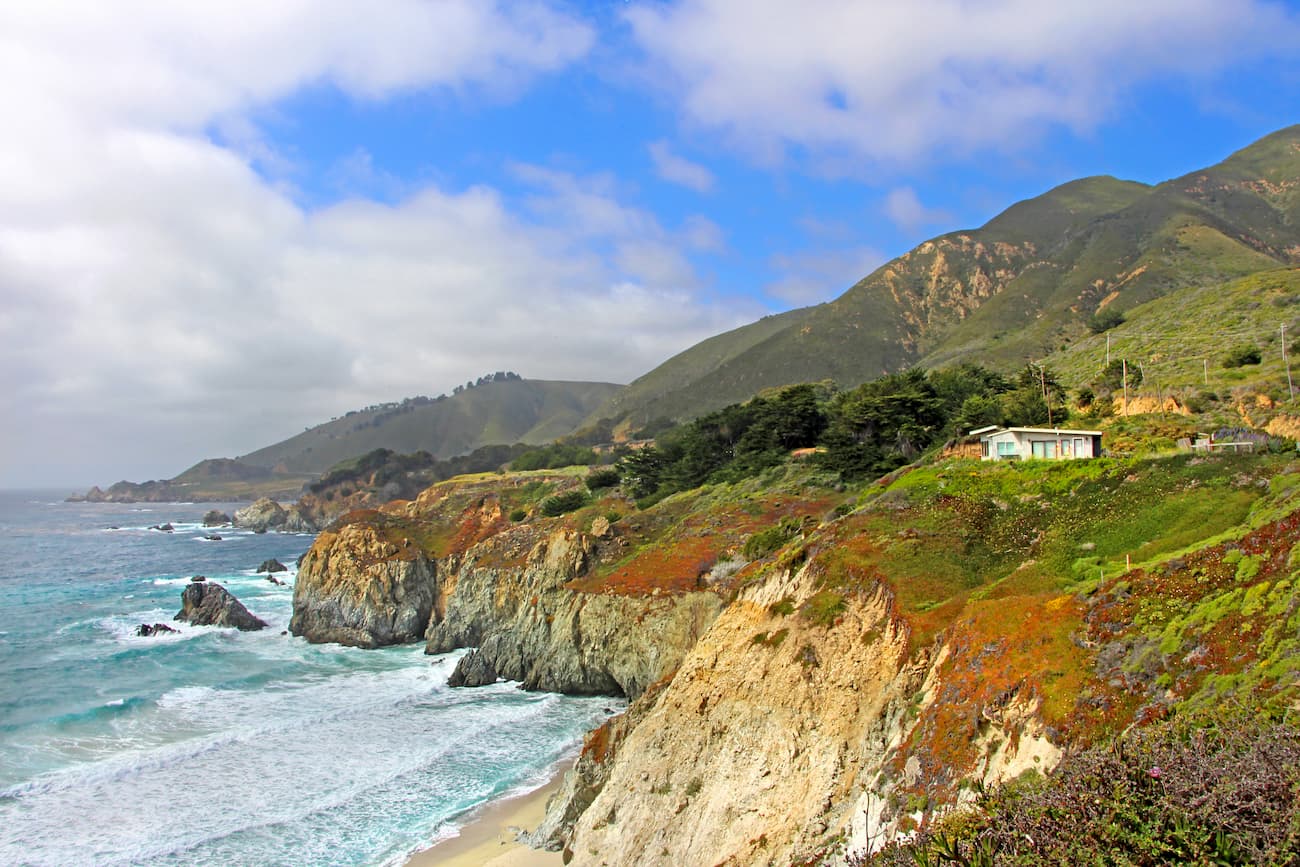 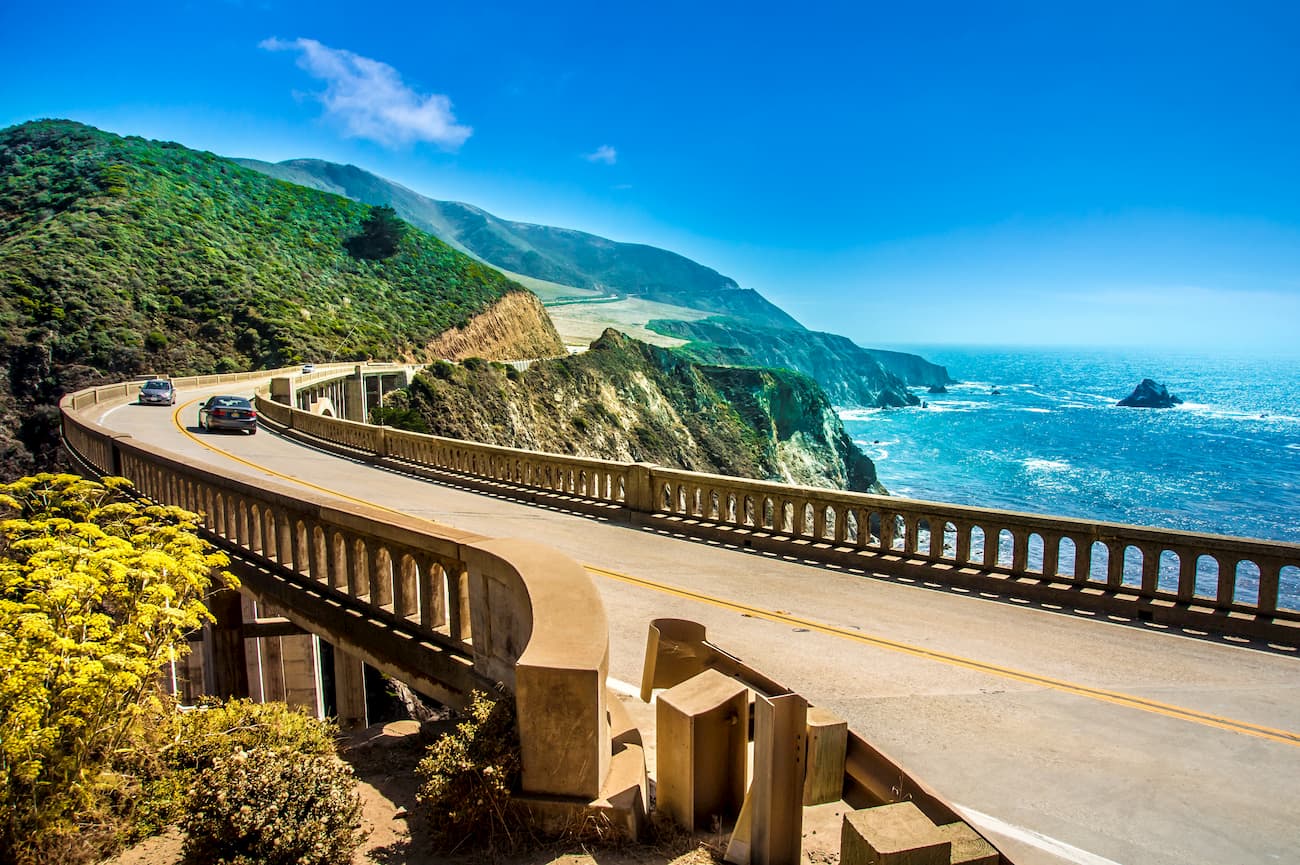 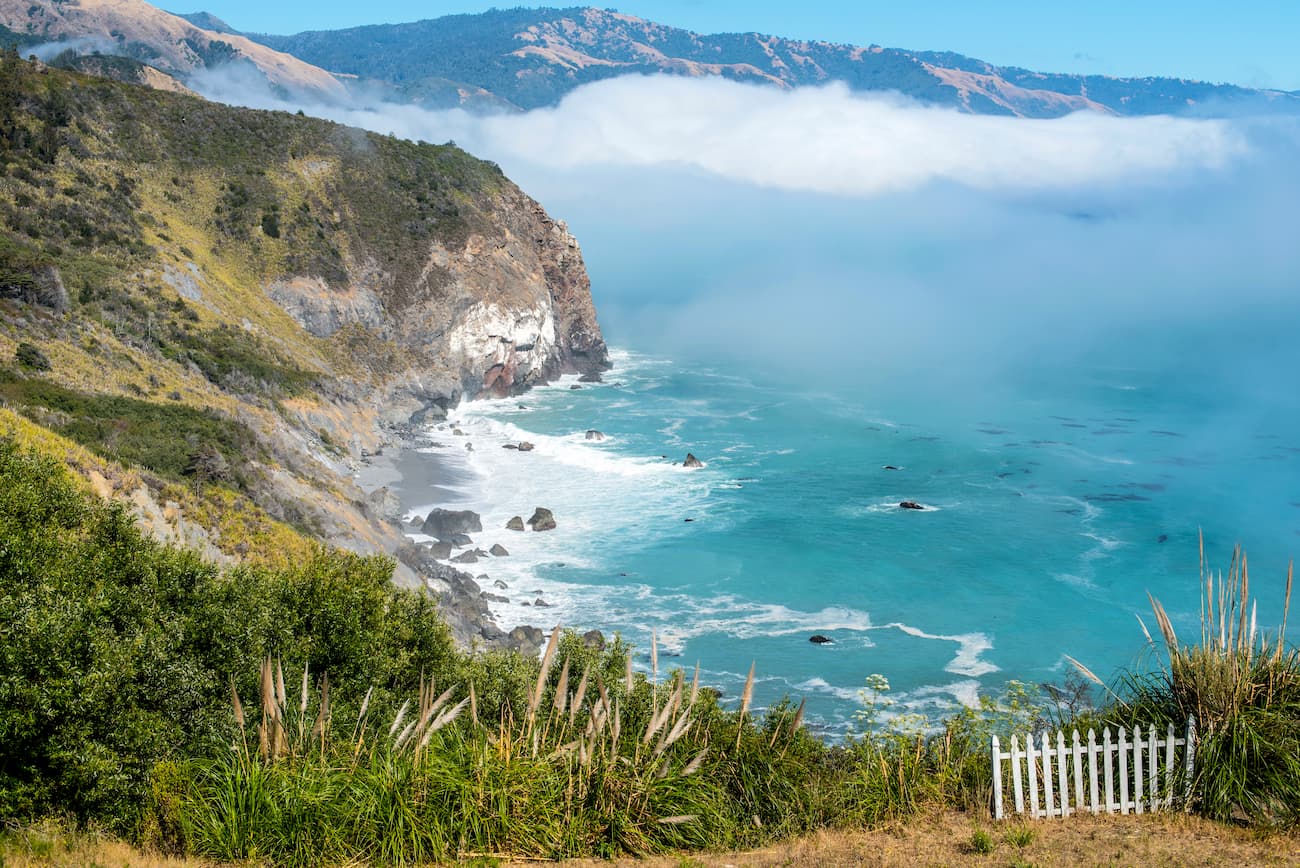 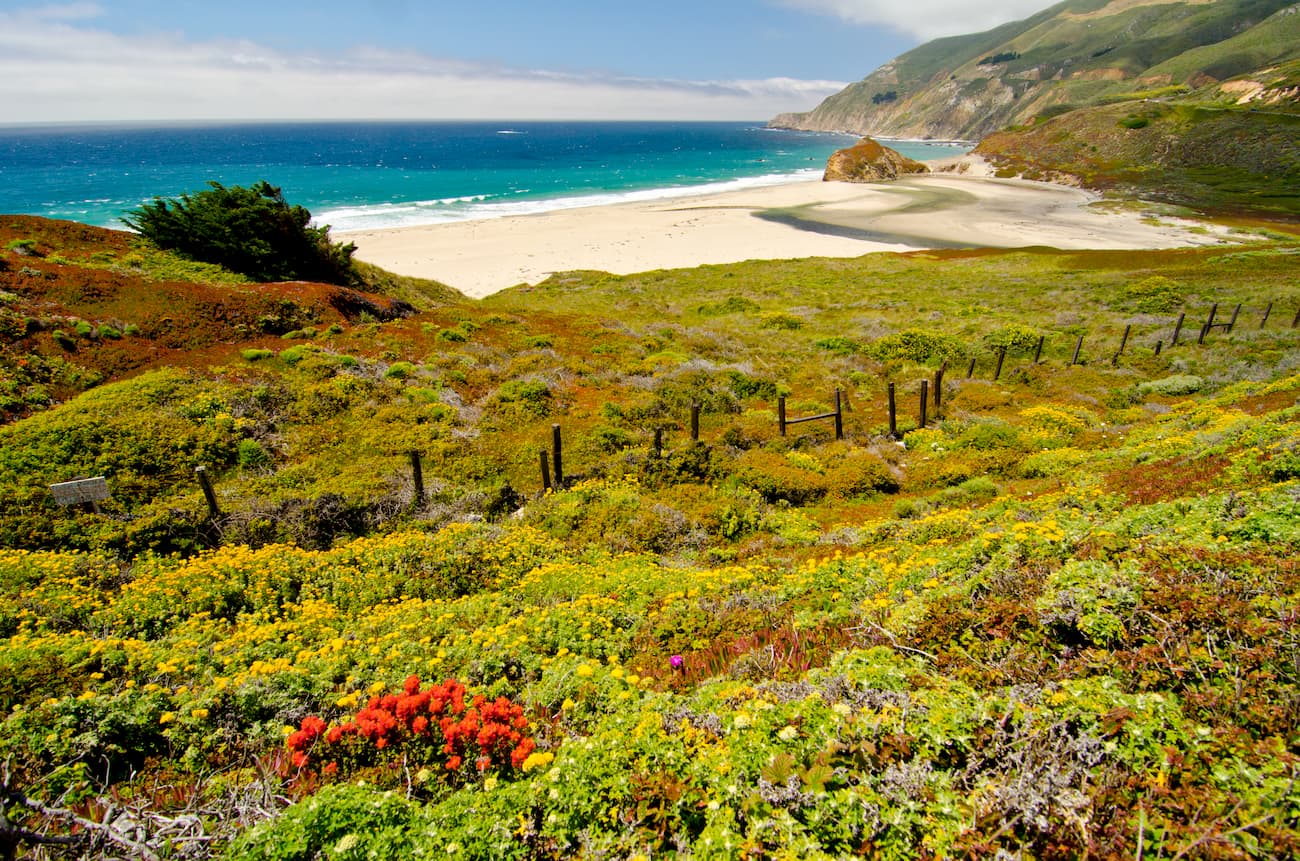