Approximately 23 million years ago, several volcanoes erupted, forming the otherworldly geologic wonderland that is now known as Pinnacles National Park. According to geologists, the volcanic region once sat 195 miles to the southeast of the park, but tectonic forces have since moved portions of the volcanic field to its current location. Today, Pinnacles is still shifting northwest at an average of two inches a year.

The park lies in the southern portion of the Gabilan Range, a northwest-southeast trending range found within the California Coast Ranges system. Elevations in the park are modest, ranging from just 824 feet to 3,304-feet at the top of North Chalone Peak. But the park protects more than 26,000 acres of volcanic spires, pinnacles, cliffs, and peaks east of the Salinas Valley in California. 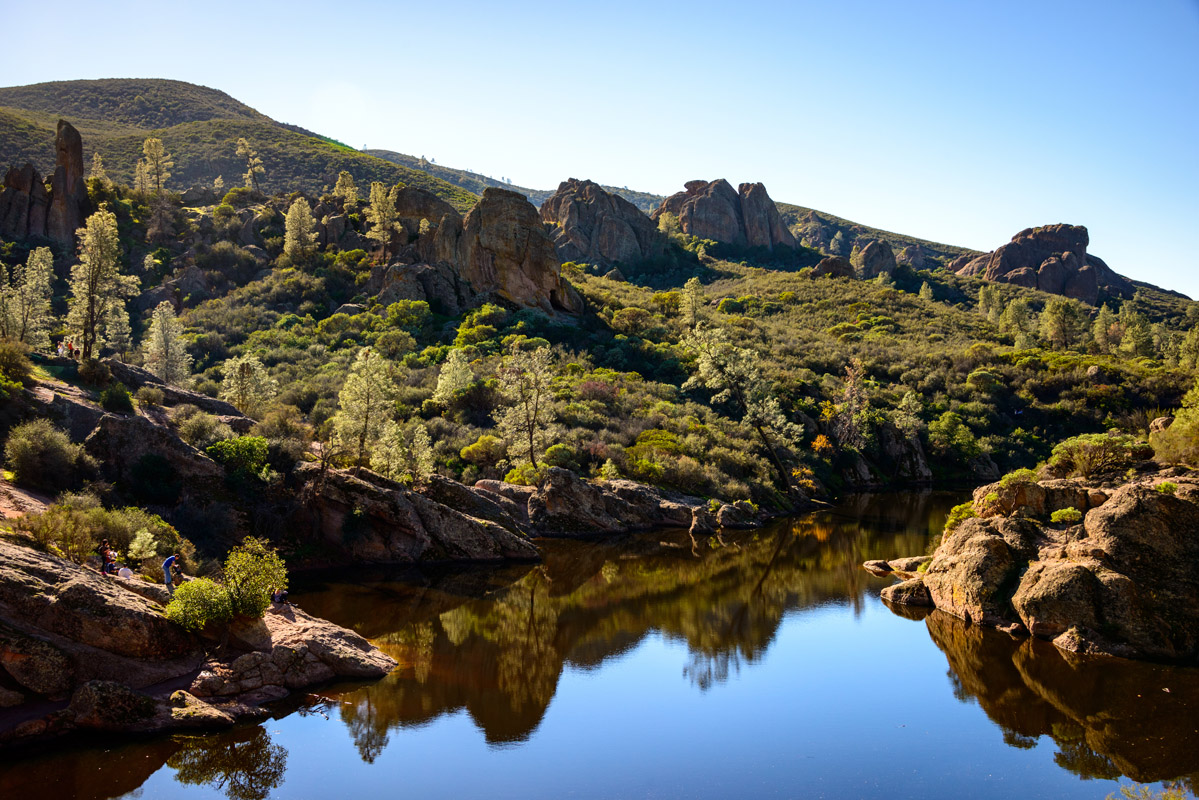 Despite being established as a national monument in 1908, the park did not receive national park designation until 2013, making it one of the newest national parks in the states. The park, which is renowned for its spectacular monoliths and spires, varied wildlands, and rich diversity, is divided into two parts, the East and West Divisions.

Both sides of the park feature impressive geologic formations and house a variety of hiking and rock-climbing opportunities. The east side receives more visitors and provides more facilities and attractions, like the Pinnacles Visitor Center, Bear Gulch Nature Center, and Bear Gulch Cave and Reservoir. The west side, however, is characterized by the park’s iconic rocky spires and contains several impressive hiking trails. There are no roads connecting the east and west entrance to the park, so visitors have to choose which part of the park they want to explore or make a 5+ mile trek to the other side on foot.

More than 80% of the park is designated wilderness – the Hain Wilderness. The wilderness designation provides additional protection for rock spires like South Chalone Peak.

Although the park is best-known for its stunning rock formations, it also provides a safe haven for a variety of plants and animals. From canyon bats to mountain lions, Pinnacles houses a mosaic of different habitats. In fact, the park houses several sensitive species including the big-eared kangaroo rat, Pinnacles shield-back katydid, and Gabilan slender salamander.

Pinnacles has long-been considered a mecca for rock climbing. The park’s rocky spires and pinnacles make it the perfect landscape for all levels of rock climbing and popular routes are clearly marked and accessible. Several companies also offer climbing lessons and multi-day rock climbing camps at Pinnacles.

Visitors that aren’t looking to climb the park’s namesake rock formations can take advantage of 32 miles of trails that travel through quirky formations and talus caves. Hikes vary from flat stretches of grasslands to strenuous climbs.

Found in the east end of the park, the High Peak Loop is one of the park’s most iconic hiking trails. This rocky and steep 5.3-mile trek leads to the park’s most impressive namesake spires, offering stunning views along the way. The trail passes several streams, travels through talus caves, and climbs through the park’s beloved pinnacles. Needless to say, if you only have time for one hiking trail, the High Peaks loop is the one to explore.

Climb to the highest peak in the park via the Rim Trail to the Chalone Peak trail. This 7.7-mile out and back trail follows the reservoir before turning south towards the park’s highest point. The trail ascends beyond iconic pinnacles like The Sisters, the Love Handles, Ridge Rock, and The Hatchet before reaching an old fire lookout on North Chalone Peak.

Another iconic footpath in the park, the Bear Gulch Cave trail is a 1.8-mile, family-friendly trek to one of the park’s most beloved talus caves. The trail ascends a stunning boulder-filled gorge on the east side of the park. The trail begins beneath a canopy of trees before reaching a small tunnel and a staircase that leads through the cave. Don’t forget to pack a flashlight, you’ll be traveling through complete darkness as you make your way over a series of rocks and to a split in the trail.

There are no hotels, cabins, or resorts in Pinnacles National Park. The only campground in the park, Pinnacles Campground, is located on the east side of the park and offers ten and group camping, along with RV sites. 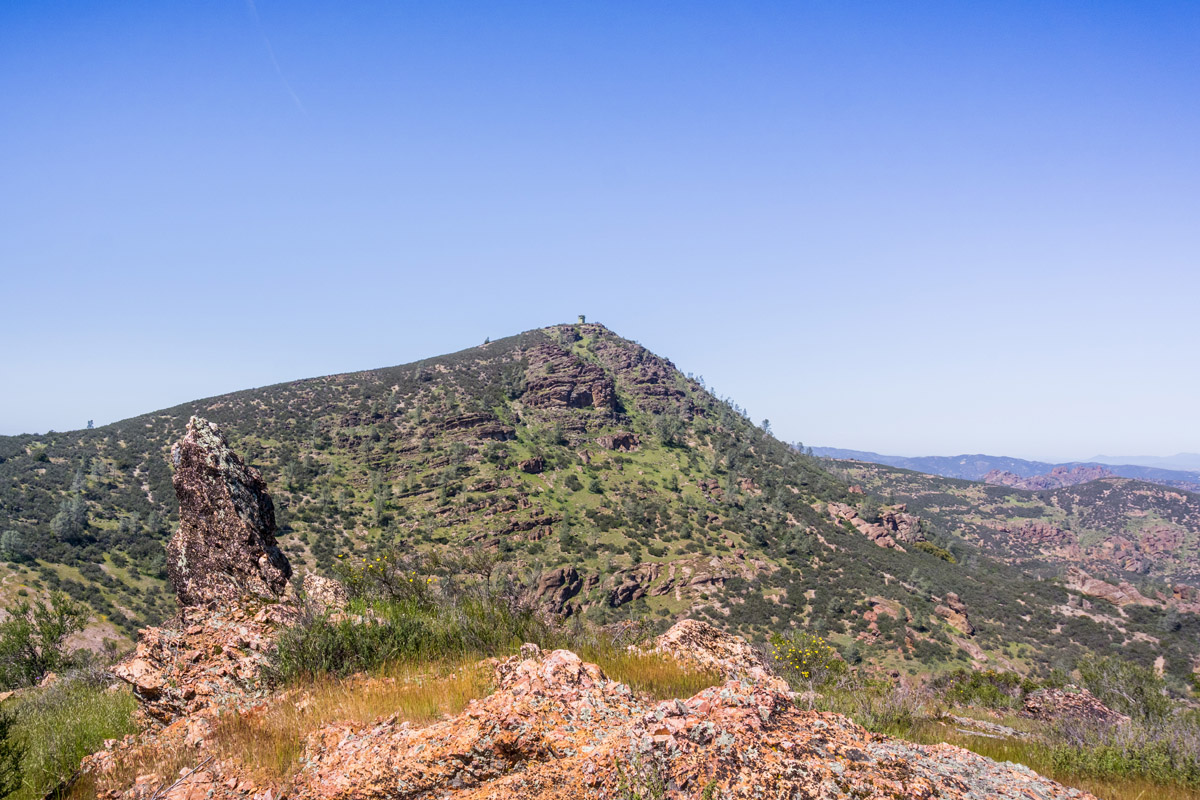 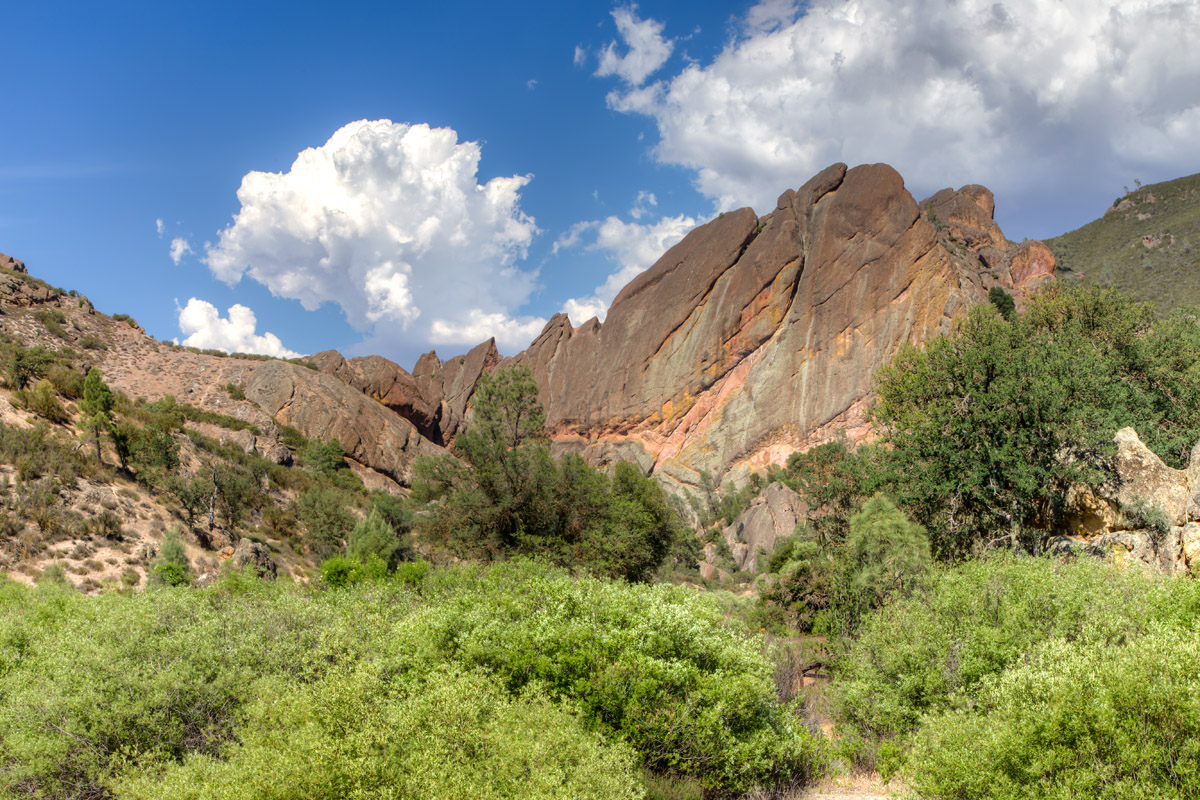 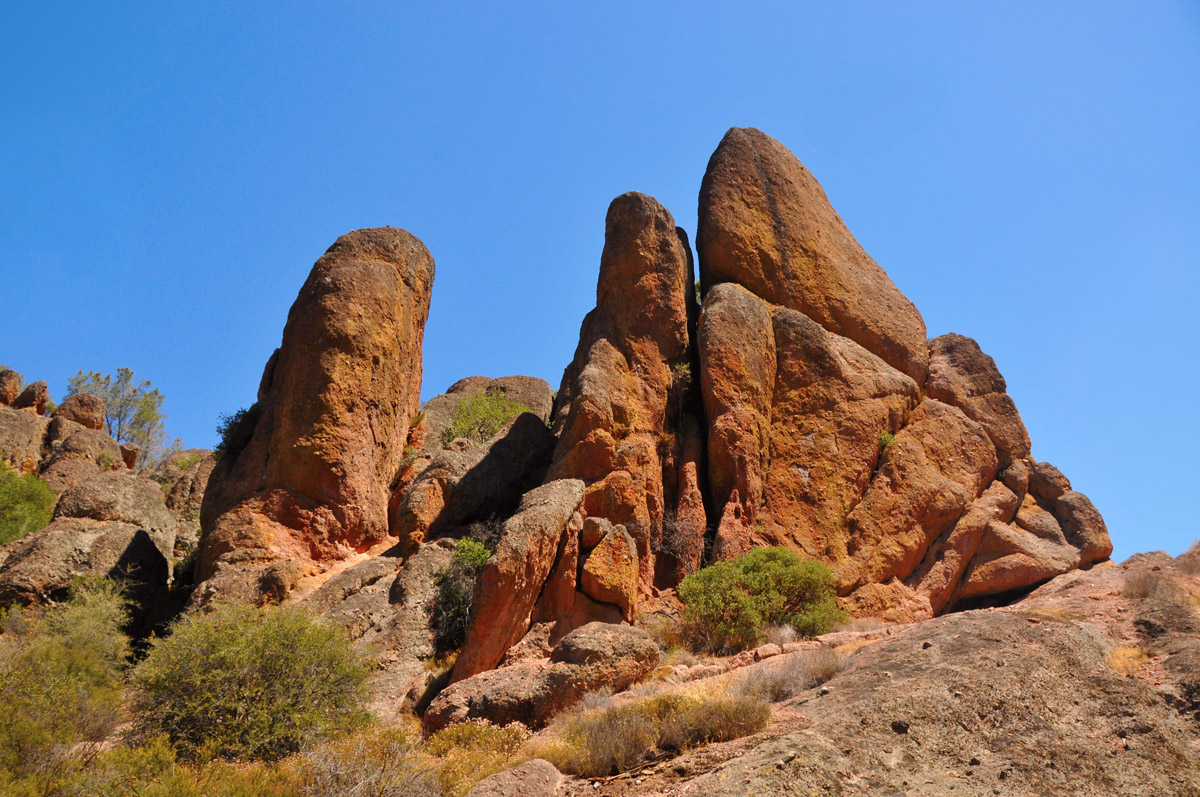 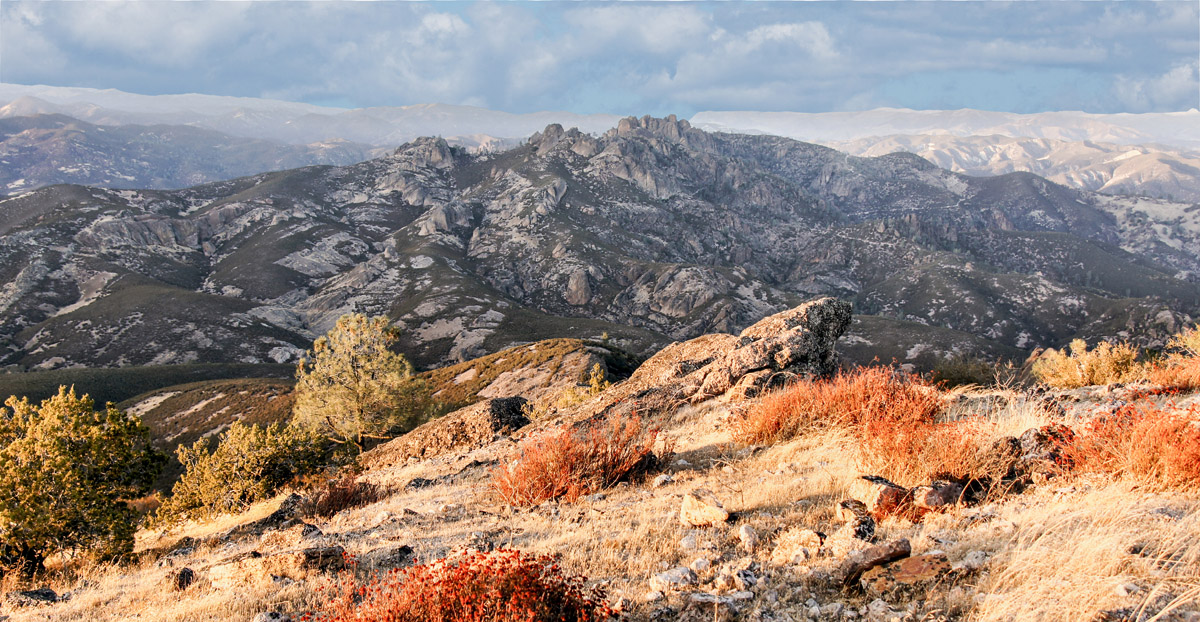 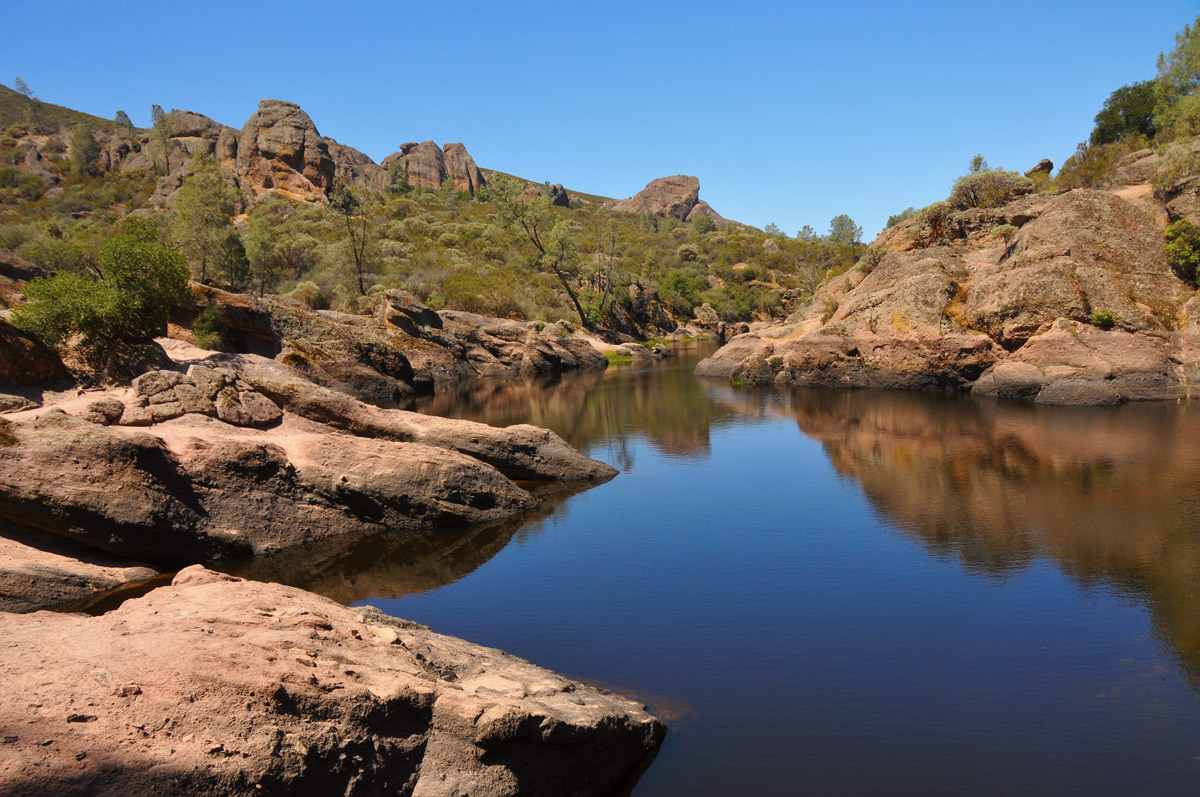 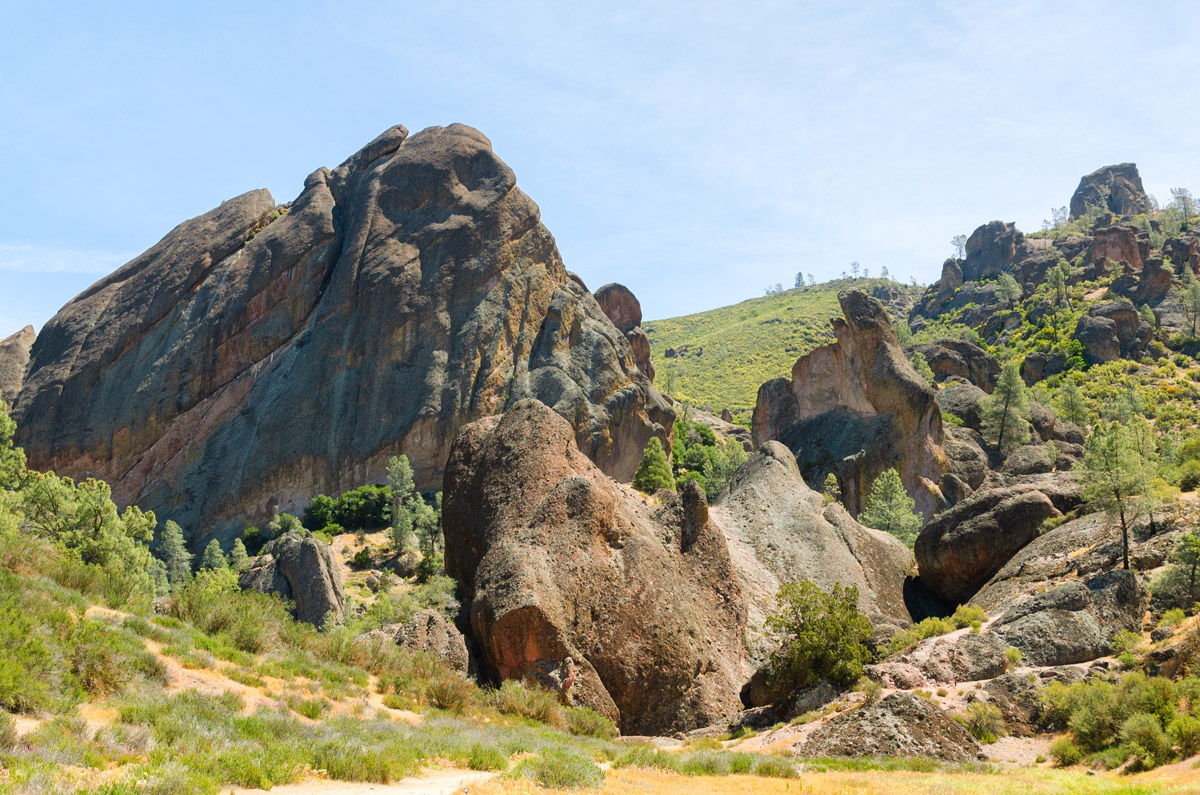