Located along the rugged west coast and among the Kitimat Ranges of British Columbia, Canada, Gitnadoiks River Provincial Park is a protected area with dome-like granite mountains, sheer cliffs, and numerous waterfalls. The park has 11 named peaks, the tallest and most prominent of which is Mount Valpi with a height of 2,219 m (7,280 ft) and a prominence of 2,017 m (6,617 ft). 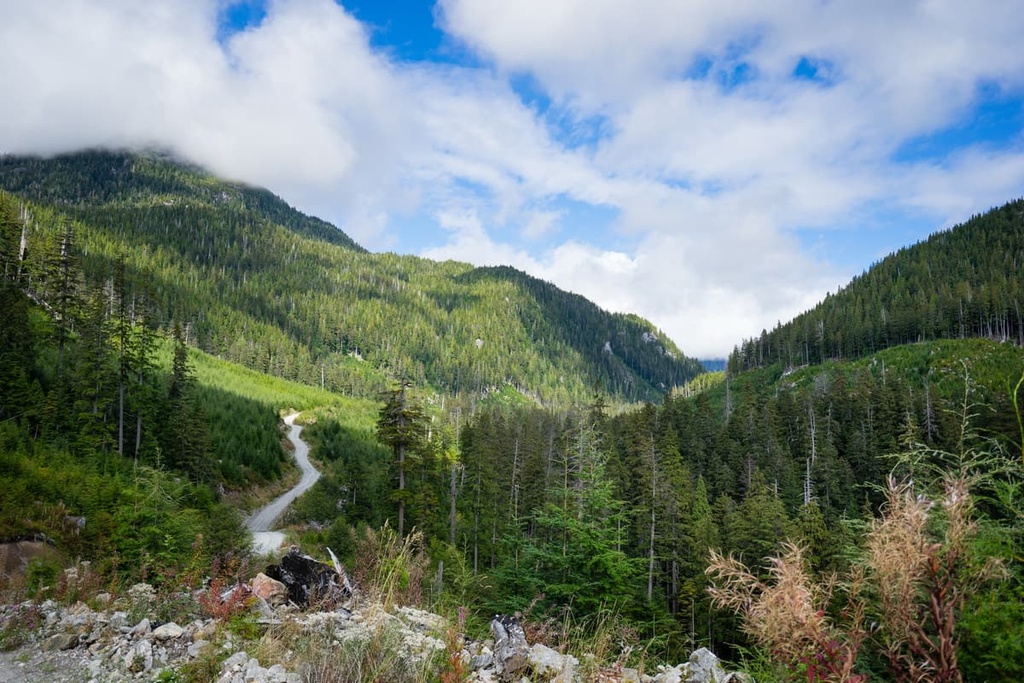 Gitnadoiks River Provincial Park is located in the Kitimat Ranges of the Canadian Coast Mountains in British Columbia, Canada. The park is characterized by its granitic mountains, which feature sheer faces and plummeting waterfalls.

Situated primarily around the Gitnadoiks River, Gitnadoiks River Provincial Park’s topography rises upward from 100 m (330 ft) in the valley to over 1,800 m (5,900 ft) at the tops of the park's 11 mountains. Mount Valpi, the tallest mountain in the park, is one of British Columbia’s ultra-prominent mountains thanks to its 2,017 m (6,617 ft) of prominence.

Gitnadoiks Provincial Park is located within the Kitimat Ranges of the Canadian Coast Mountains.

The Coast Mountains consist of both igneous and metamorphosed Mesozoic and Paleozoic layers of rock. The rocks of the Coast Mountains likely originated about 1,600 km (1,000 mi) to the southwest of where they currently sit, having formed on the ancient tectonic plates in the Pacific.

Most of British Columbia to the west of the Rocky Mountains is actually the result of the accretion of these exotic terranes and volcanic activity. The Kitimat Ranges were created as the granitic intrusions deformed under the heat and pressure of subsequent intrusions of magma. The force of subducting tectonic plates also compressed the coastal margin, lifting the Coast Mountain above sea level.

During the Pleistocene, the cordilleran ice sheet covered most of the Kitimat Ranges and the Coast Mountains. This created the ranges’ characteristic dome-like mountains with rather uniform summit elevations, save for the region’s distinctive glacially carved valleys and rugged peaks.

Additionally, these mountain glaciers worked their way west, toward and into the Pacific Ocean, carving deep, steep sided valleys from the peaks to the sea. As the glaciers melted, the sea level rose and filled these deep, west coast valleys, turning them into the rugged fjords they are today.

Gitnadoiks River Provincial Park is home to a wide variety of elevations, including areas as low as 100 m (330 ft) at the valley bottoms and regions over 1,800 m (5,900 ft) at the top of the park’s peaks. These elevations have given rise to the park’s three main ecological zones.

The cold, snowy winters in the region create conditions that are generally unfavorable for plants and animals to live in the alpine. However, along the west coast, the peaks are often filled with meadows of mountain heather, in addition to patches of dwarf shrubs, heaths, herbs, mosses, and lichen.

The barren alpine rock, which adorns the park’s summits, gives way to a parkland-like ecosystem with stands of trees interspersed in the heather meadows. Mountain goats are residents of the peaks in Gitnadoiks River Provincial Park, as are ground squirrels and marmots.

The Mountain Hemlock zone is a thin band of high-elevation subalpine that’s located along the Pacific coast.

The subalpine starts at the parkland-like treeline and the forests grow denser as they lose elevation. While the parkland stands are interspersed with sedge and mountain heather communities, at lower elevations, the forests are filled with mountain hemlock, amabilis fir, and yellow cedar.

Black bears, grizzly bears, Roosevelt elk, and black tailed deer are common inhabitants of this zone. Mountain goats prefer the open rocky outcroppings in the region during the summer, though they prefer to winter on the steep, south facing slopes of the zone.

Many birds live in the mature forests of the subalpine as it grants them access to insects, small animals, and conifer seeds for nourishment. The willow ptarmigan and blue grouse prefer the parkland meadows of the zone, while the great horned owl, great grey owl, Clark’s nutcracker, and several woodpecker species inhabit the forests.

The Coastal Western Hemlock zone is the picturesque temperate rainforests of the Canadian west coast. Found in the lower elevations, where the growing season is longer and the precipitation falls as rain for most of the year, the giant western hemlocks, and western red cedars reign supreme.

Other trees that are common to the park’s valleys include big leaf maple, alder, Douglas fir. This zone has the greatest diversity of wildlife habitat of any ecological zone in British Columbia. It is the most densely inhabited part of Gitnadoiks River Provincial Park, too, where most of the wildlife will be found, especially in the winter.

Researchers have also confirmed that trumpeter swans nest in the park. This makes Gitnadoiks River Park one of only three confirmed nesting sites in the province.

The coastal region of what is now British Columbia, which includes Gitnadoiks River Provincial Park and the Regional District of Kitimat-Stikine, has been inhabited by humans for around 14,000 years. It is speculated that human migration to the area began as the cordilleran ice sheet melted at the end of the Pleistocene.

The region is one of the oldest continuously occupied regions of North America. Before European contact, it was also one of the most densely populated areas north of Mexico. Gitnadoiks River Provincial Park is located in the traditional territory of the Kitselas First Nation which is part of the Tsimshian communities.

The people of those who first inhabited the region were able to thrive in what is now Gitnadoiks River Provincial Park because the area is home to an abundance of salmon to eat. This allowed for the development of complex societies and communities, including the contemporary Kitselas First Nation. For example, the Kitselas First Nation has a long history of producing incredible artwork, which includes the creation of stunning wood carvings on cedar longhouses and totem poles.

Starting in the sixteenth century, diseases brought by European colonizers and settlers began to rip through the local communities killing an estimated 90 to 95 percent of the Indigenous residents of the Pacific coast. Smallpox and measles were especially devastating as Indigenous peoples in the region had never built up any immunity to these introduced diseases.

While there are no settlements in Gitnadoiks River Provincial Park, local First Nations continue to practice their traditional lifestyle by hunting and trapping within the park. Fishing is available for all visitors who have a license. There are sportfishing opportunities for Pacific salmon, rainbow trout, cutthroat trout, dolly varden char, and mountain whitefish.

As it is located in the rugged and difficult to access Kitimat Ranges of the Coast Mountains, Gitnadoiks River Provincial Park is only accessible by boat; however, the remote park has incredible wilderness experiences waiting for those willing to make the journey to the park.

The following are some of the reasons to visit the park and the surrounding area:

The park is accessible only by boat or plane, and the nearest boat launch is in Exchamsiks River Provincial Park. The highlights of the park include paddling the Gitnadoiks River to Alastair Lake, where you’ll be surrounded by the towering Kirby Crags, Tentacle Peak, Alastair Peak, and Davidson Peak.

There are no official trails in the park; however, there is a cabin on Alastair Lake available for public use.

Paddling, fishing, and mountaineering are the major draws to the parks. With over thirteen fish species present in the lake and river, there are many fish that will present a worthwhile challenge for keen anglers.

Additionally, there are many mountaineering and alpine routes to discover and create in this remote wilderness.

Home to the remains of houses and totem poles that have stood since the 1800s, Kitselas Canyon is a National Historic Site that’s well worth checking out. While not part of Gitnadoiks River Provincial Park, the historic site gives insight into the lives of the people who have inhabited these mountains and river valleys for over 5,000 years.

There are traditional long houses to see in the canyon as well as the Clan Totem Pole Garden. The locals of Kitselas Canyon are proud of their history and culture and want to share it with visitors. Additionally, there are several trails in the canyon leading through the beautiful moss-covered forests to viewpoints of the Skeena River.

Located to the south of the Skeena River in the Regional District of Kitimat-Stikine, Gitnadoiks River Provincial Park is a remote wilderness park that protects important ecosystems and traditional land use areas.

The following are some of the cities and towns that are worth checking out during your next trip to the park:

Terrace is the primary community in the Regional District of Kitimat-Stikine. It is one of the closest major communities to Gitnadoiks River Provincial Park. Terrace is located at the junction of Highway 16 and Highway 37, and it has become the main retail and service hub for the region.

There are countless areas to explore near Terrace and many activities, such as fishing, hiking, mountain biking, climbing, and hunting, to enjoy. In fact, locals often spend the autumn searching for wild mushrooms and picking berries throughout the summer.

Some of the recommended locations to hike around Terrace include Gunsight Lake, Wesach Falls, Terrace Mountain, Wesach Mountain, and Sleeping Beauty Trail. Other worthwhile trails include hikes along Williams Creek, Spring Creek, and to the trails to Hai Lake and Pine Lake.

While the current town of Kitimat was constructed in the 1950s, First Nations have lived in the area for generations in small fishing villages. The town is generally considered to have been founded in 1951 by Alcan, and it is about 60 km (36 mi) from Gitnadoiks River Provincial Park.

Kitimat is located alongside tidal waters at the head of the Kitimat Arm of the Douglas Channel amongst lush forest and tall peaks, Kitimat has many hidden gems to discover. With trails that lead up mountains, along creeks, along rivers, through valleys, or along the ocean shore, there is sure to be something for everybody to enjoy in Kitimat.

Located on Kaien Island, Prince Rupert is situated about 60 km (36 mi) to the west of Gitnadoiks River Provincial Park. It is the transportation hub of the north coast of British Columbia and the area has been inhabited for the last 5,000 years by First Nations.

Prince Rupert has a variety of trails for hikers to choose from. Some of the most popular hikes around Prince Rupert include the Butze Rapids Trail, Tall Trees Trail, and the trail to Wantage Falls. You can also hike Mount Hays via the Kiwanis Trail.

The city is also the starting point for many wildlife viewing trips, including expeditions to see grizzly bears, salmon, eagles, and whales. Tours can be arranged from Prince Rupert to Khutzeymateen Grizzly Bear Sanctuary, which features one of the densest populations of grizzlies in North America. 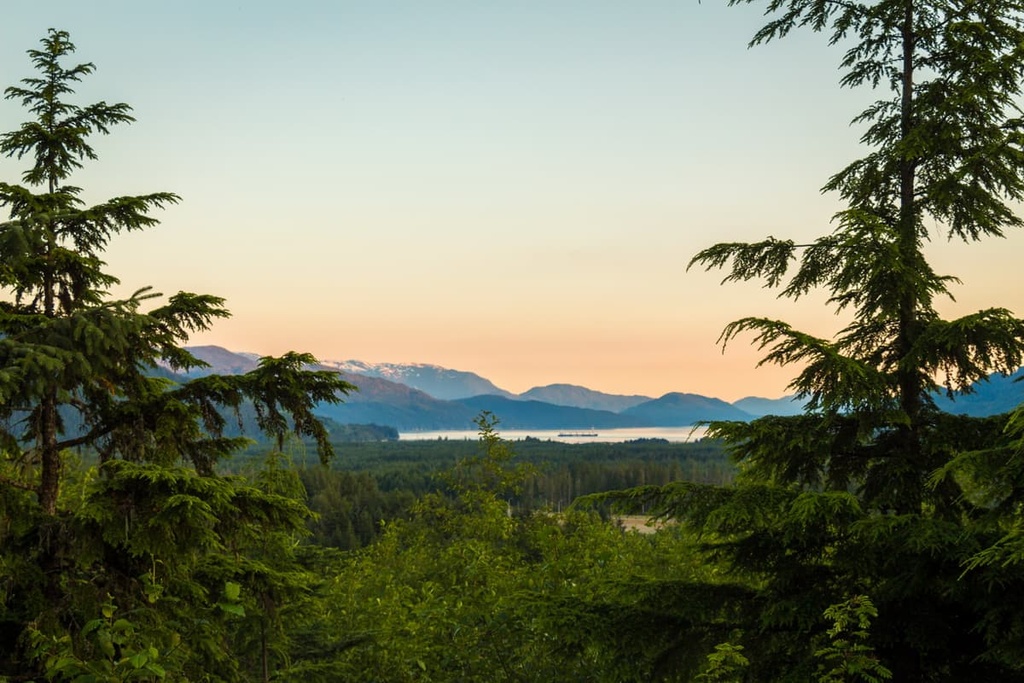 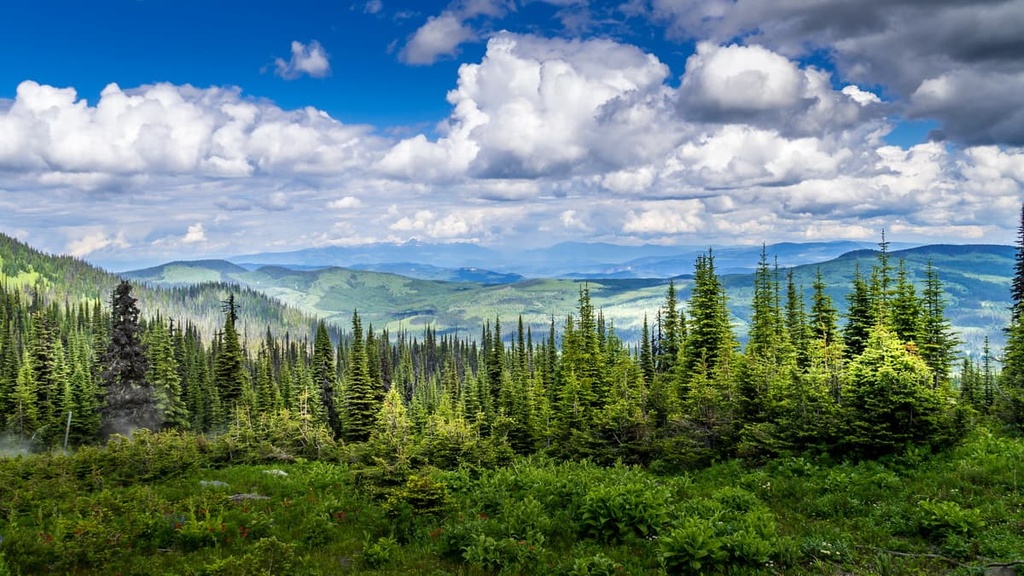 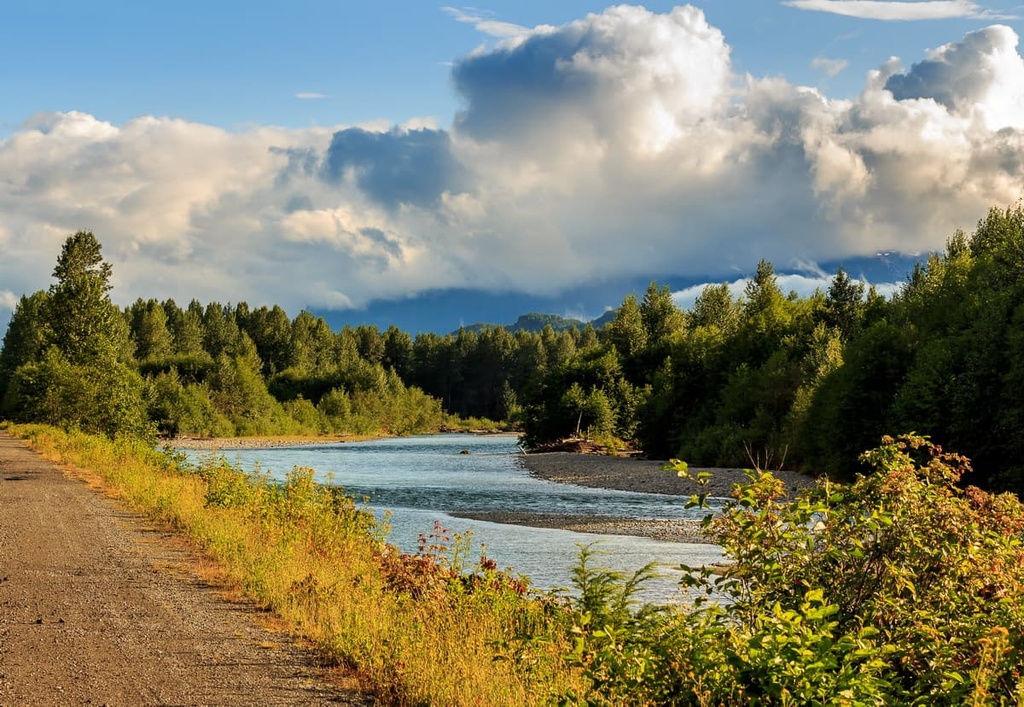 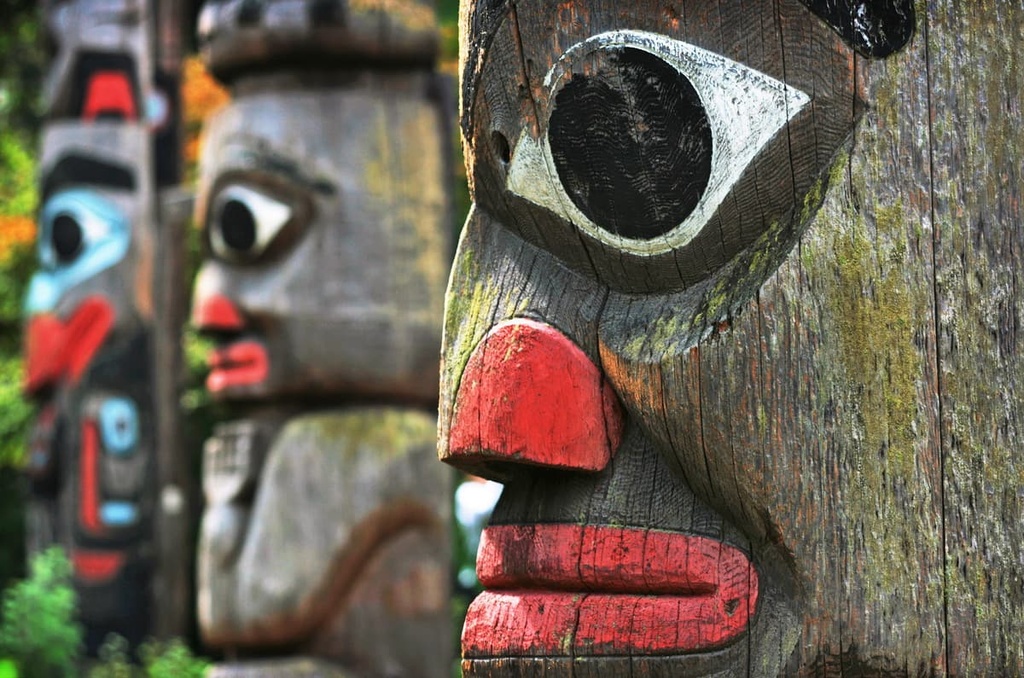