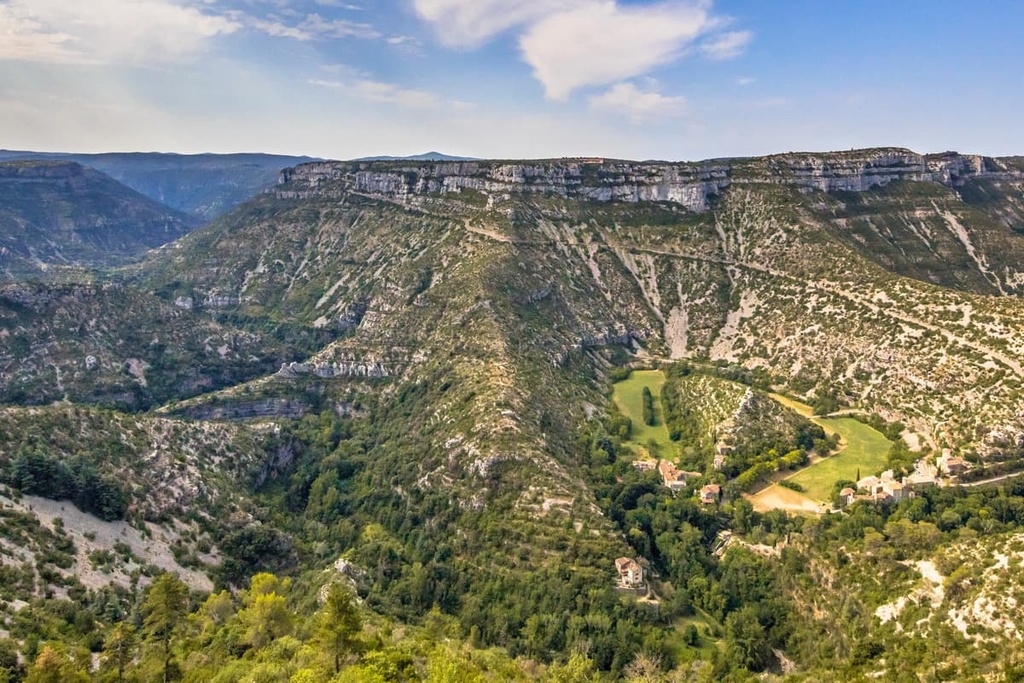 A buffer zone surrounds the park, and it encompasses an area over 2,000 sq. km (772 sq. mi). The park was established in 1970 and is the largest national park in mainland France.

Cévennes National Park can be split into five different areas:

There are thought to be approximately 168 different ecosystems within the park's core region. Approximately half of the park is forested.

The landscape is dominated by limestone plateaus that culminate in the park's highest mountain, Mont Lozère (1,701 m/5,581 ft), which is located to the north. The Mont Lozère region of the park has the harshest and most varied landscape, ranging from moorlands and granite boulder fields to woodlands.

In the south of the park is the Aigoual Massif, 70 percent of which is coated in forests. The massif’s highest mountain, Mont Aigoual (1567 m/5141 ft), is significant as it's home to a meteorological observatory.

The park's center consists of the Cévennes Valleys, a set of rolling wooded valleys. The western edge of the park is the Cévennes Piedmont, which forms the foothills of Mont Lozère and is one of the park's most heavily populated areas.

The seventeenth-century castle of Château de Florac within the town of Florac has served as the park's headquarters since 1976. Other notable settlements near the Cévennes National Park include Mende, Alès, and Nîmes. Montpellier, the second-largest city in Occitania, is also located approximately 120 km (74 mi) to the south of Cévennes National Park.

The Cévennes' massifs feature a basement of Paleozoic metamorphic and crystalline rocks that are between 250 and 540 million years old. These basement rocks are made up of schists, quartzites, and granites.

The area's granite, which is more resistant to erosion than the other basement rocks, is over 300 million years old, and it forms the park's highest mountains, including Mont Lozère (1,701 m/5,581 ft).

The mountains of Cévennes formed during the Variscan orogeny. This mountain-building event was caused by a continental collision during the Late Carboniferous period approximately 290 million years ago. Other mountains linked to this orogeny extend from Spain to the Appalachian Mountains in the United States.

The Cévennes are distinct from the rest of the Massif Central, as the region is bounded by a fault line that runs from northeast to southwest. This fault has likely existed since the Variscan orogeny and is currently inactive.

The top layer of the Cévennes consists of Mesozoic rocks between 65 and 250 million years old. Sedimentary limestones are the most common rocks found in the park's vast highland plateaus.

Today, the Cévennes National Park consists of carboniferous-aged valleys, rugged granite summits, and limestone plateaus. The Cévennes's massifs are modest in elevation compared with other French ranges, as the majority of the summits in the range are below 1,500 m (4,921 ft) in height.

Approximately 70 of France's 135 mammal species can be found within Cévennes National Park. The largest mammals in the park include red deer, roe deer, and wild boars. Other notable mammals include otters, beavers, and lesser horseshoe bats.

One hundred and ninety-five bird species have been documented within Cévennes National Park, including 135 nesting species. Golden eagles, an emblem of French national parks, are one of the Cévennes' most popular sights. Birdwatchers may also get lucky and spot capercaillies, Egyptian vultures, and boreal owls.

Over 2,000 invertebrates inhabit the Cévennes National Park, including roughly 1,824 insect species. Visitors to the park can expect to encounter many beautiful butterfly and moth species, such as Apollos, yellow shells, and cabbage whites.

As has been previously mentioned, Cévennes National Park is home to 2,250 flowering plant species, which accounts for 40 percent of all French flora. Forests cover approximately half of the national park, and common tree species include oaks, chestnuts, beeches, birches, and Scots pines.

There's no shortage of flower variety across the Cévennes, from lady's slipper orchids to fumeworts to martagon lilies. Other notable plant species include marsh gentians, wild daffodils, and pheasant's eyes.

The park is also home to over 1,000 lichen species, 730 moss species, and several thousand mushroom species.

Agriculture has been a feature of civilization in the Cévennes since the end of the Neolithic era approximately 6,500 years ago. During this period, humans established small villages and constructed mysterious megaliths in the region.

Around 200 of these dolmens and menhirs can be found across the park. The area around La Cham des Bondons is also the second-largest concentration of standing stones in the country.

The Gallo-Roman period left behind several interesting structures in the region that is now Cévennes National Park, such as the well-preserved Lanuéjols mausoleum in Lozère, which dates back to the second or third century CE. The remnants of a few Roman villas have also been uncovered in the area, and they are complete with mosaics and underfloor heating systems.

There are many churches and monasteries from the medieval period in the national park, some of which remain in remarkable condition. Prime examples include the churches of St-Paul-et-St-Pierre d'Ispagnac, Notre-Dame de-Valfrançesque, and St-Flour-du-Pompidou. The fourteenth-century Quézac bridge, which spans the Tarn, is still in use today.

Unfortunately, many of the castles from the Middle Ages didn't fare as well, with ruins marking many of the park's valleys. Some intact examples of castles in the Cévennes National Park include Château de Grizac and Château de Miral.

Agriculture has always played a key role in the human history of the Cévennes National Park. One of the most interesting agricultural practices in the region was silkworm breeding, which was common in the eighteenth century. Many old breeding buildings and silkworm beds are still visible in the park today.

The rural exodus of France at the start of the twentieth century meant many of the park's villages became deserted. However, people began to return in the 1970s, breathing new life into the park's settlements.

Today, the Cévennes National Park is the only park in mainland France whose core area is still permanently inhabited and used for both hunting and agriculture.

Due to the remote and rugged nature of the park, hikers are advised to plan their routes carefully, inform others of their itinerary, and bring along appropriate trekking gear. Cévennes National Park is also one of the wettest areas of France, so be sure to bring waterproof clothing.

Scale the highest summit in the Cévennes National Park and learn about the history of the Knights of Malta at Mont Lozère (1,701 m/5,581 ft).

One of the most popular ways of scaling Mont Lozère is on the yellow-marked trail beginning at the Mont Lozère resort. This looped trail is 9.7 km (6 mi) in length and takes approximately 3 hours to complete.

Mont Aigoual (1,565 m/5,134 ft) is the highest summit in the Gard department and one of the most popular mountains in Cévennes National Park.

Mont Aigoual provides some of the best views in the park, as the Mediterranean Sea, the Pyrenees, and Mont Blanc (4,810 m/15,781 ft) are all visible on a clear day. Atop Mont Aigoual is also the last inhabited weather observatory in France.

The most popular hike up Mont Aigoual is the 4,000 steps, a demanding trek that follows the old postman's path. This looped trail is around 23.4 km (14.4 mi) in length and takes about 8 hours to complete. You can pick up the trail from the Valleraugue Tourism Office.

It's possible along this route to take a 30-minute detour to the top of the Rocher de Capluc (642 m/2,106 ft). A head for heights is needed for this detour, however, especially when visiting the aptly-named Balcon du Vertige (Balcony of Vertigo).

The stunning rock formations and gorges of Causse Méjean are a must-see for any visitors to Cévennes National Park.

This walk will take you along the cliffs of the Tarn and Jonte gorges, where you'll enjoy views of several unusual rock pillars, including the Vase de Sèvres and the Vase de Chine. The Corniches of Méjean is also one of the best places to spot birds of prey, including vultures.

One of the most popular ways of exploring the Corniches of Méjéan is on the yellow-marked trail starting in the village of Le Rozier. This looped trail is approximately 11 km (7 mi) in length and takes around 4 hours and 30 minutes to complete.

It's popular with hikers, too, as it provides panoramic views of Mont Lozère with the Alps and the Mediterranean Sea visible on a clear day. The trail to Pic Cassini also passes through the Hêtraie Sapinière, which is a silver fir and beech forest.

Despite its height, Pic Cassini offers an easier walk than many surrounding mountains as it has an elevation change of under 400 m (1,312 ft).

The most popular way of scaling Pic Cassini is on the yellow-marked trail from Le Mas de la Barque. This looped trail is approximately 9.3 km (5.7 mi) in length and takes around 3 hours to complete.

The best way of scaling Rocher de l'Aigle is on the yellow-marked trail from the Col de l'Asclier. Along the way, you'll pass over a nineteenth-century sheep bridge and through a verdant pine and beech forest. This looped trail is 4.2 km (2.6 mi) in length and takes around 2 hours and 45 minutes to complete.

You'll find details of several long-distance treks across Cévennes National Park, but none more iconic than The Stevenson Trail. This “Great Hike” follows the route taken by Robert Louis Stevenson in 1878 as described in his book Travels with a Donkey in the Cévennes.

You can explore The Stevenson Trail either by foot, bicycle, or horseback. The Cévennes National Park section of this route leads in a north-south direction from Le Bleymard to Alès. This point-to-point walk is approximately 126 km (78 mi) in length.

While following in Stevenson's footsteps, you'll pass through many of the settlements visited by the novelist, such as Le Pont-de-Montvert, Bédouès, and Florac. You'll also pass by several castles, including the ruins of the thirteenth-century Castle of Saint-Julien-d'Arpaon.

Sat on the Tarn near the center of the Cévennes National Park is Florac. Florac is home to the seventeenth-century Château de Florac, the ground floor of which serves as the park's headquarters.

Le Vigan is the largest settlement within Cévennes National Park. Located on the park's southern boundary, Le Vigan has its roots in ancient history as it was built on the site of the Gallo-Roman town of Vindomagus.

If you're looking to learn more about the history of the Cévennes range, you should take a tour of the Musée Cévenol. The Col des Mourèzes, a road pass used in the Tour de France 2020, is popular with cyclists. You'll find several hotels in Le Vigan, including Hotel du Commerce and Logis Hôtel le Mas de la Prairie.

Another relatively large town resting on the Cévennes National Park's southern edge is Anduze. With a population of over 3,300 people, Anduze is only slightly smaller than Le Vigan. Anduze is a favorite spot for tourists as it’s home to many picturesque fountains and buildings, including a fourteenth-century clock tower.

If you're looking for something to do in Anduze, consider visiting the Bambouseraie de Prafrance botanical gardens or the twelfth-century Château de Tornac. Two excellent hills for hiking, Les Capélans (389 m/1,276 ft) and La Grande Pallières (449 m/1,473 ft), are located less than 5 km (3 mi) away from Anduze, too.

Sandwiched between the foothills of Mont Aigoual and the Causse Méjean is the small town of Meyrueis. It's one of the prettiest towns in the Cévennes National Park, due partly to its location at the convergence of three rivers: Jonte, the Béthuzon, and the Brèze.

One of the main attractions in Meyrueis is the local limestone cave systems, including the famous Aven Armand, which features stalagmites over 30 m (98 ft) long. You should also consider touring the historic Roquedols Castle, which dates back to the sixteenth century.

Tucked away in the Gorges du Tarn and flanked by rolling hills is Sainte-Enimie. Thought to be one of France's most beautiful villages, Sainte-Enimie is known for its cobbled streets and ancient monasteries. Legends say seventh-century Merovingian Princess Enimie founded Sainte-Enimie after a nearby water source cured her of leprosy. 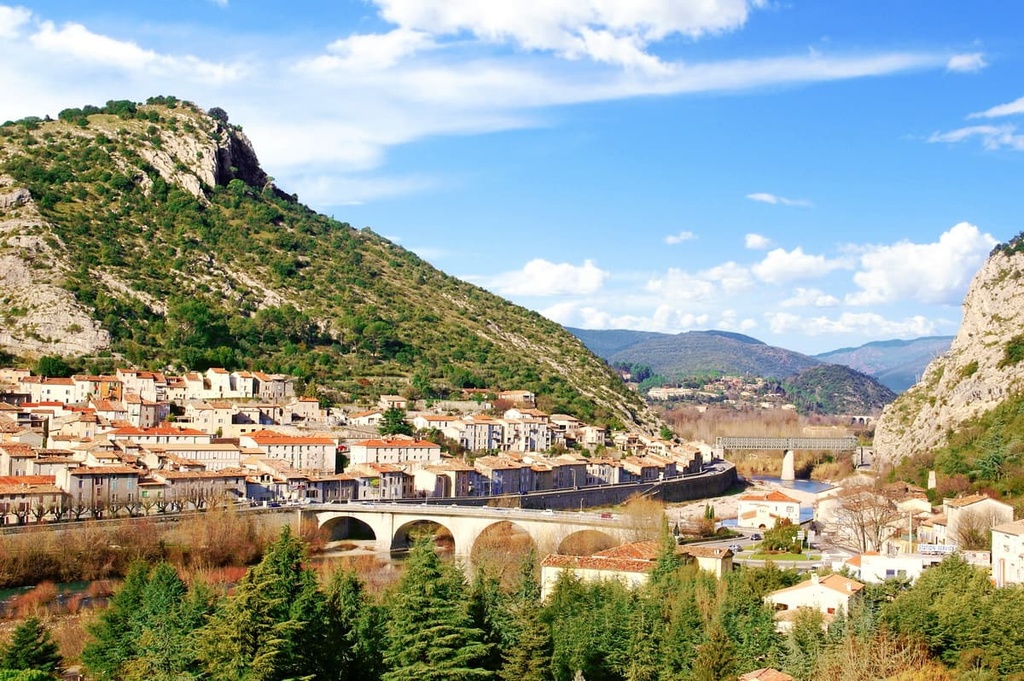 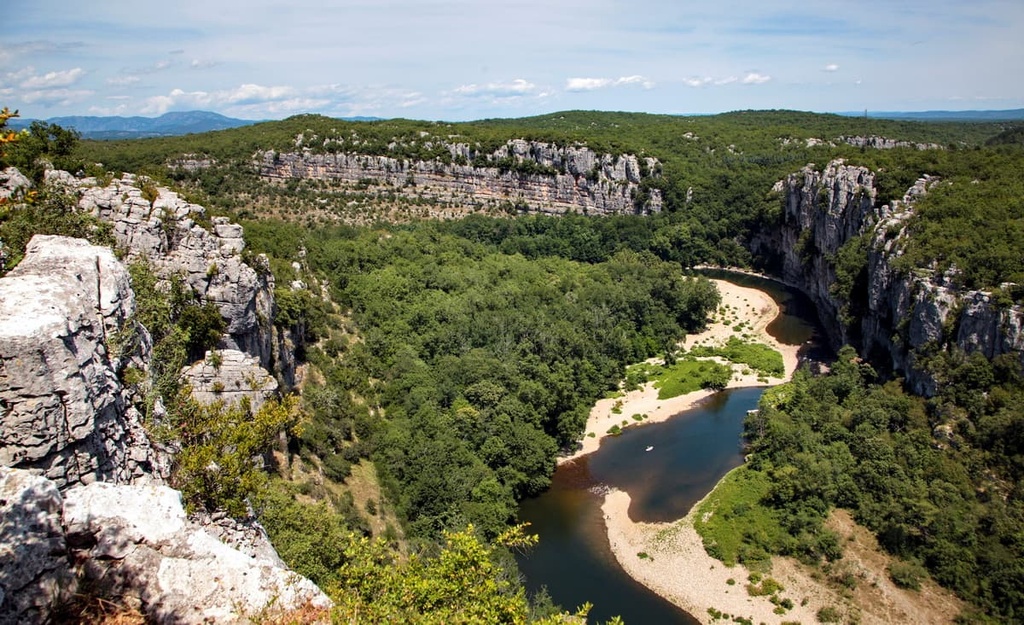 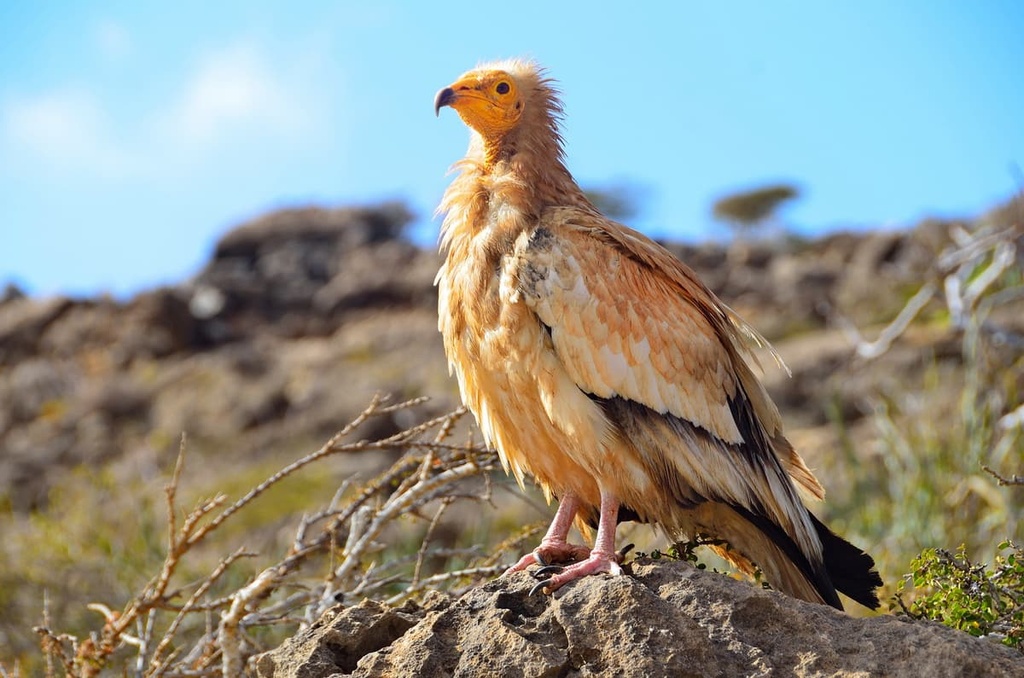 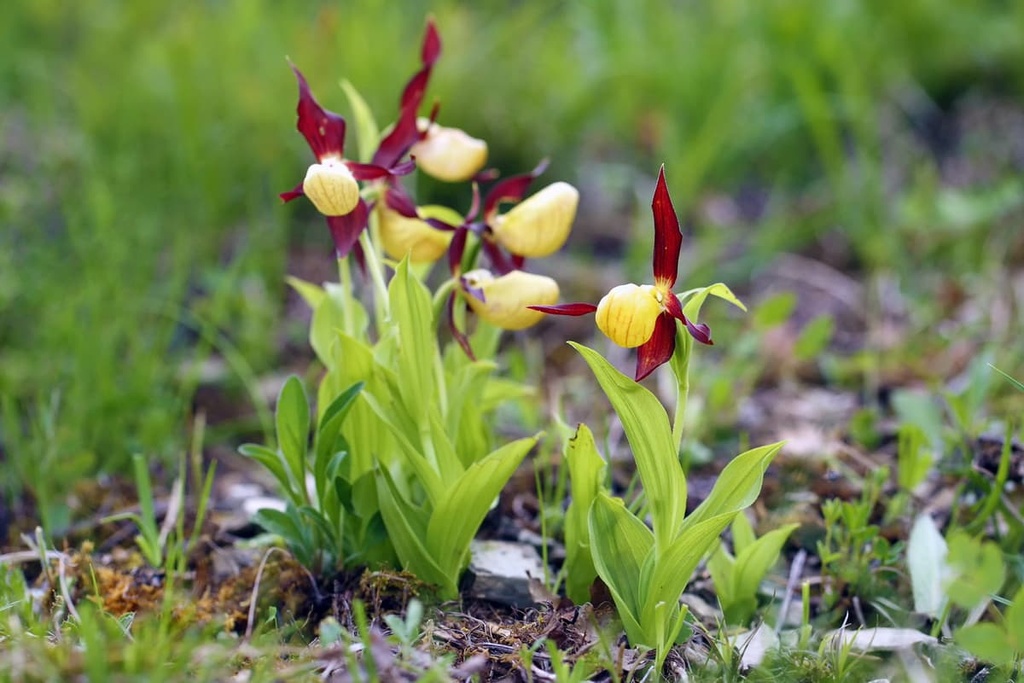 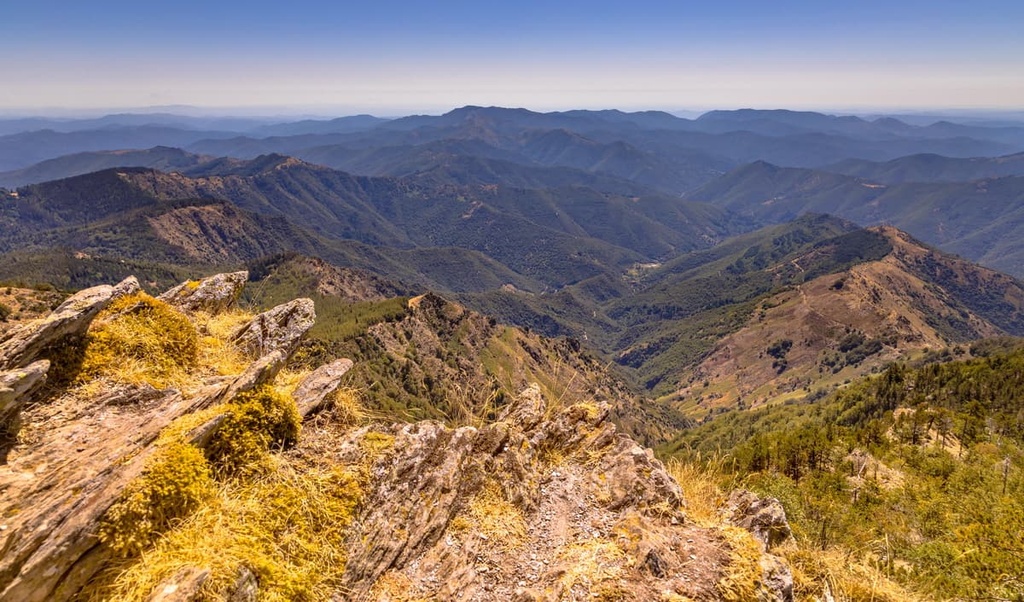 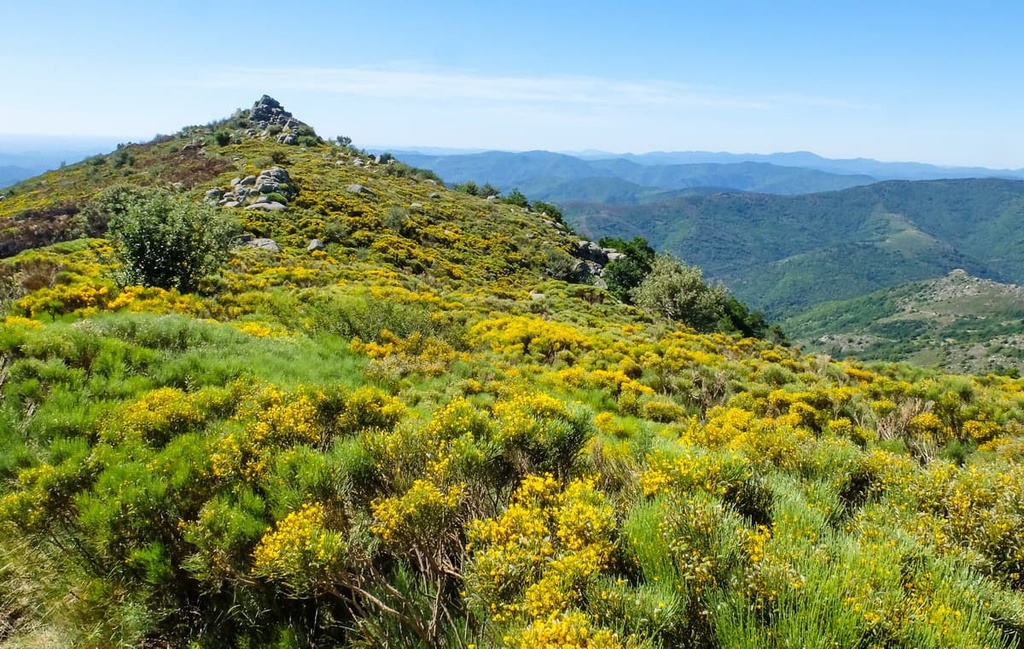 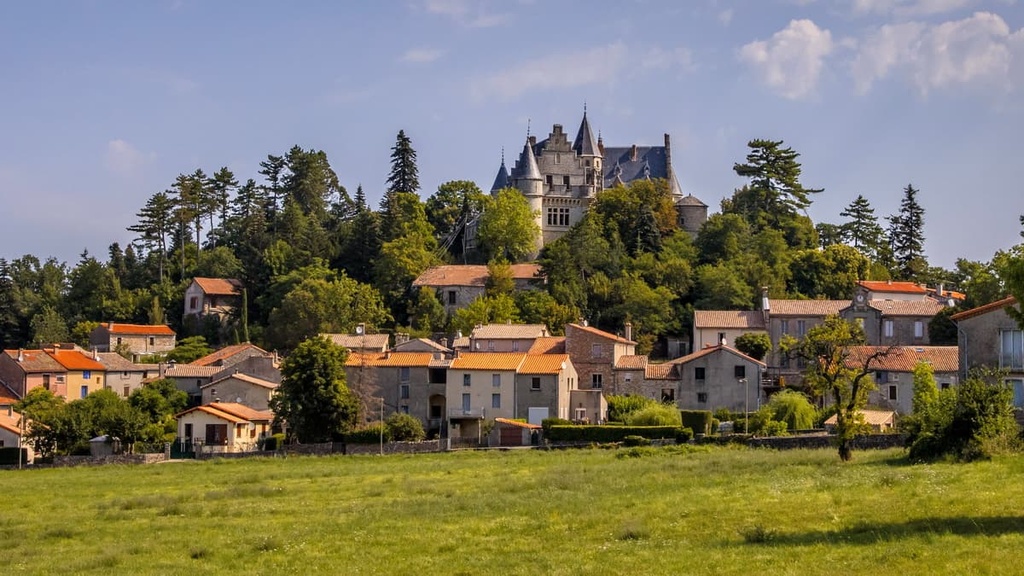