Berchtesgaden National Park is a mountainous region located in the extreme southern part of Germany near the country’s border with Austria. The park is home to Lake Königssee, which is known for having some of the cleanest water in the entire country. There are 174 named mountains in the park. The tallest peak is Watzmann-Mittelspitze standing at 2,713 m (7,129 ft) in elevation, and the most prominent is Stadelhorn with 1,118 m (3,668 ft) of prominence. 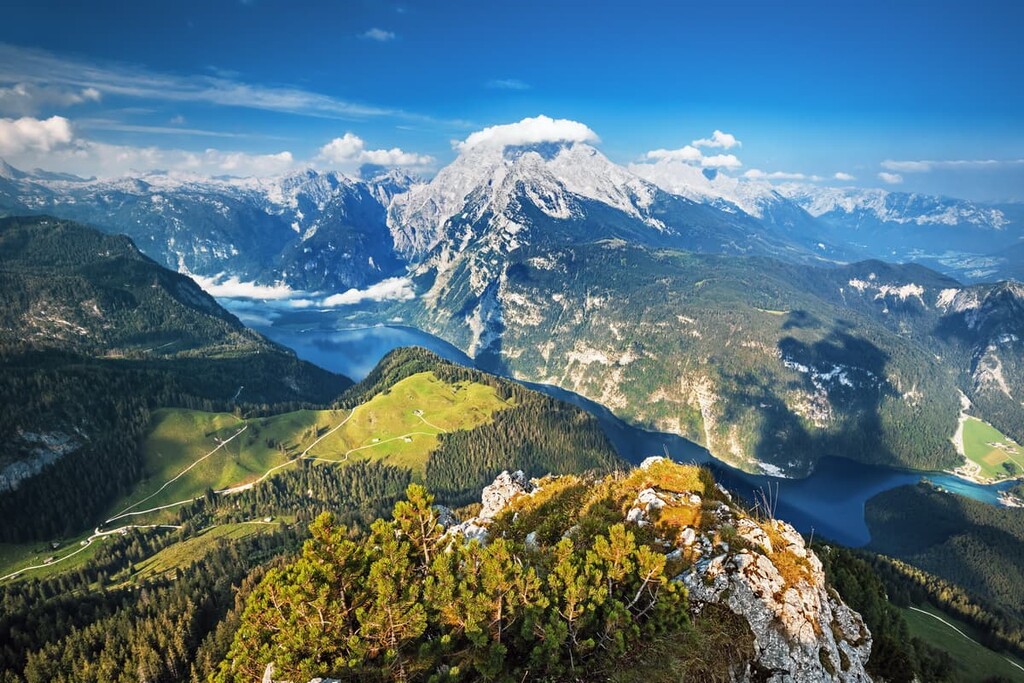 Berchtesgaden National Park (Nationalpark Berchtesgaden) is situated in southern Germany in the Free State of Bavaria. The park is located in the municipalities of Ramsau bei Berchtesgaden, Berchtesgadener Land, and Schönau am Königssee, and it is surrounded by Austria on its western, southern, and eastern borders. The park coverns 210 sq. km (81 sq. miles) of land across the Berchtesgaden Alps.

Lake Königssee is located in the middle of the park and it is one of the defining features of the region. The clear and narrow lake is surrounded by rugged cliffs and forested hillsides and its waters are often considered to be some of the cleanest in Germany.

While steep sections in the park are met with sheer rock faces, the more gentle slopes are often heavily forested. Sweeping green pastures and wide valleys can also be found in Berchtesgaden National Park, allowing for fields of wildflowers to thrive during the summer months.

Deep valleys cut between the numerous peaks in the park. Snowfall on the various peaks, such as the Watzmann-Mittelspitze massif, help feed the many streams that run through the region. Two of the five glaciers within Germany are found within the park, creating the headwaters for many rivers throughout both Germany and Austria.

Elevations in the park range from 540 m (1,771 ft), up to the summit of Watzmann-Mittelspitze. As part of the larger Alps, the peaks in the park began forming during the Alpine orogeny.

The upheaval of the earth’s crust gave rise to this massive chain of mountains and its numerous smaller subranges. As the African and Eurasian plates collided, the peaks slowly rose over the course of hundreds of millions of years.

Today the peaks in Berchtesgaden National Park are dominated by limestone. Prior to the uplift that formed these mountains, it is believed the region was once part of an ancient seafloor. Mineral deposits were left behind and the continuous folding helped to form the peaks.

Some common animal species in the park include populations of ibex and red deer, which can be found both within the forests and along the mountain pastures. Other species include marmots, chamois, golden eagles, black woodpeckers, and black grouse.

Bears, wolves, and lynx once thrived in the region but they have since been extirpated from this part of Germany. However, wolves have started making their way back into Germany, particularly in Saxony, so there is hope that they will repopulate much of their traditional territory.

Spruce trees dominate the landscape, a sign of the logging that once transformed the forests. While human intervention isn’t allowed within the core zone, alpine farming takes place in the buffer zone.

Planting of both beech and fir trees throughout the spruce forest has allowed the forest to return to its natural state. Rare species of orchids can also be found throughout the mountain pastures of the park.

Just outside of the park boundaries lies the municipality of Berchtesgaden. Though it is estimated that humans have inhabited the region for thousands of years, the first written human record in the municipality dates back to 1102.

This first recorded note mentioned the rich salt deposits within the region. The region has been home to salt mines for hundreds of years and is one of the main reasons that communities began to flourish in the area. The first recorded salt mine was established in 1517.

Due to its close proximity to Austria, the city has been under different governments many times throughout its history. In the early nineteenth century, Berchtesgaden was under Bavarian rule.

The royal family at the time often visited the region and used it as private hunting grounds. The town and surrounding nature slowly became popular amongst artists, particularly painters and writers.

During the early twentieth century, the region actually became a popular vacation area for Adolf Hitler. Throughout the Nazi era, the area around Berchtesgaden became an important place to the Nazi regime as the Nazi Party began to acquire land in the region.

During the war, they also built a new railway station and attempted to develop the municipality to serve as an outpost for the Reichskanzlei. The Nazis also built the Eagle’s Nest (Kehlsteinhaus), a luxury building at the summit of the Kehlstein just outside the town that was used for government meetings and social gatherings.

In the years that followed the end of World War II, the region became a militarized zone that was occupied by the US Army. However, it wasn’t until fifty years after World War II that American troops returned the city back to the Bavarian authorities.

These days, Berchtesgaden remains a popular tourist destination. The first successful ascent of Watzmann-Mittelspitze occurred in 1800. The peak has since become a major destination for mountaineers from around the world. Meanwhile, the surrounding town and landscapes have also become popular among outdoor enthusiasts and history buffs, alike.

Berchtesgaden National Park was established in 1978 in order to protect the biodiversity, natural beauty, and pristine waters of the region. It continues to be a major tourist draw in the region, bringing large numbers of visitors to southern Bavaria each year.

Berchtesgaden National Park is home to numerous hiking trails. Here are some of the most popular trails in the park:

Situated along the northern end of Lake Königssee lies the Malerwinkel Trail. This short route is just 3.2 km (2 miles) long with 160 m (524 ft) of elevation gain. Malerwinkel is one of the most accessible trails for views of the pristine lake.

The trail offers sweeping views of Lake Königssee, St. Bartolomä pilgrimage church, and the steep forest hills surrounding the lake. The route can also be extended by following the trail that runs along the eastern side of the lake.

The Wimbachbrücke zum Watzmannhaus is a challenging yet rewarding hike, leading ambitious hikers into the peaks of the park. The trail is 13.7 km (8.5 miles) long with 1,329 m (4,360 ft) of elevation gain.

Starting on the northern edge of the park, the trail climbs steadily for 6.4 km (4 miles) until reaching the base of Watzmanngugel. Once there, hikers will find views of the dramatic rock faces as well as Watzmannhaus. If booked in advance, hikers even have the option of staying overnight at the hut at Watzmannhaus.

The Grünstein Loop is a popular trail that offers views of both the peaks of the park and the small villages down below. The loop trail is 10.1 km (6.3 miles) long with 719 m (2,358 ft) of elevation gain.

This route offers views of Lake Königssee as well as wildflowers during the summer months. The loop can also be accessed from Schönau am Königsee.

Looking for a place to stay near Berchtesgaden National Park? Here are some of the best cities and villages to check out near the park:

Just north of the park lies the municipality of Bertesgaden. Sharing the same name as the park, the town is home to around 8,000 full-time residents. Visitors to the town have direct access to the national park, boat rides along Lake Königssee, and even tours of the salt mines in the region.

Besides the park, one of the most popular sites in Berchtesgaden is a structure known as Eagle’s Nest (Kehlsteinhaus). Once a chalet built for the Nazi Party, the Eagle’s Nest today offers some of the best views of the entire valley as well as historical insight into one of the darkest times in Germany’s history. The market square in the city is also full of shops and restaurants that are well worth checking out.

The city of Salzburg is located to the northeast of the park in Austria. Home to over 150,000 people, Salzburg is the fourth largest city in the country, and it is known for its Baroque architecture. With three universities, the city is also particularly popular amongst younger residents.

Often referred to as the City of Mozart, tourists to Salzburg can visit the Mozart Museum, along with the Hohensalzburg Fortress, and Mirabell Palace and Gardens. 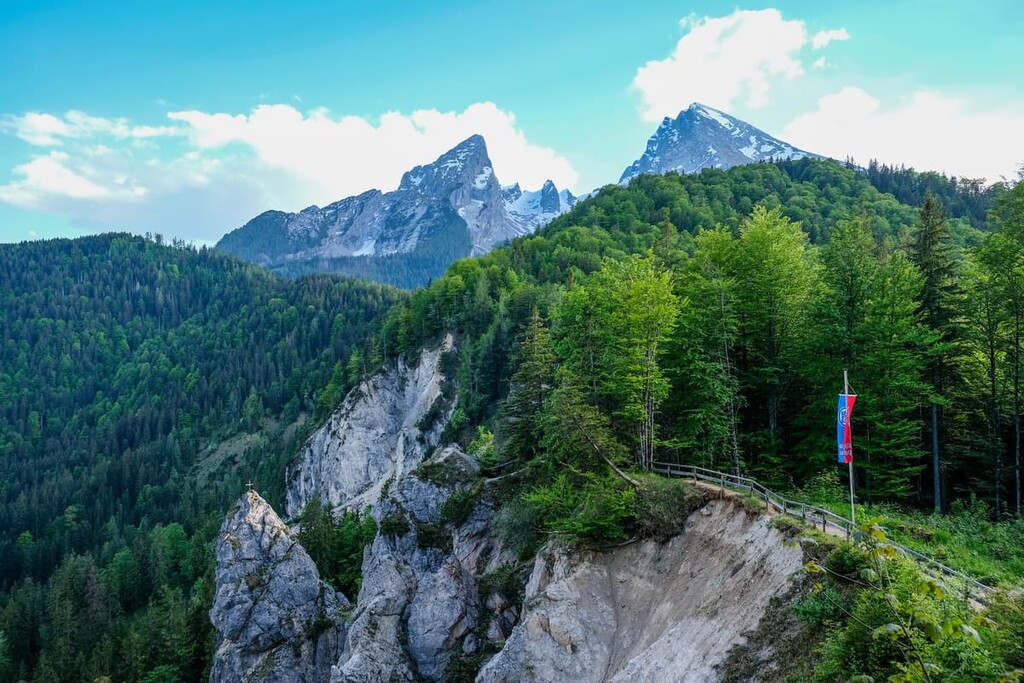 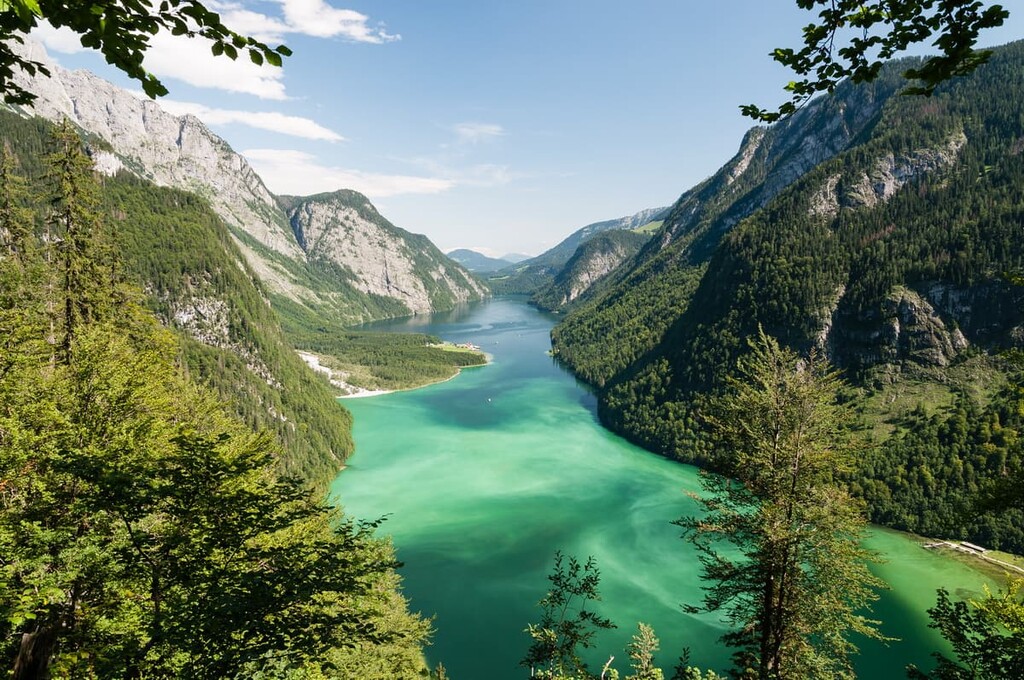 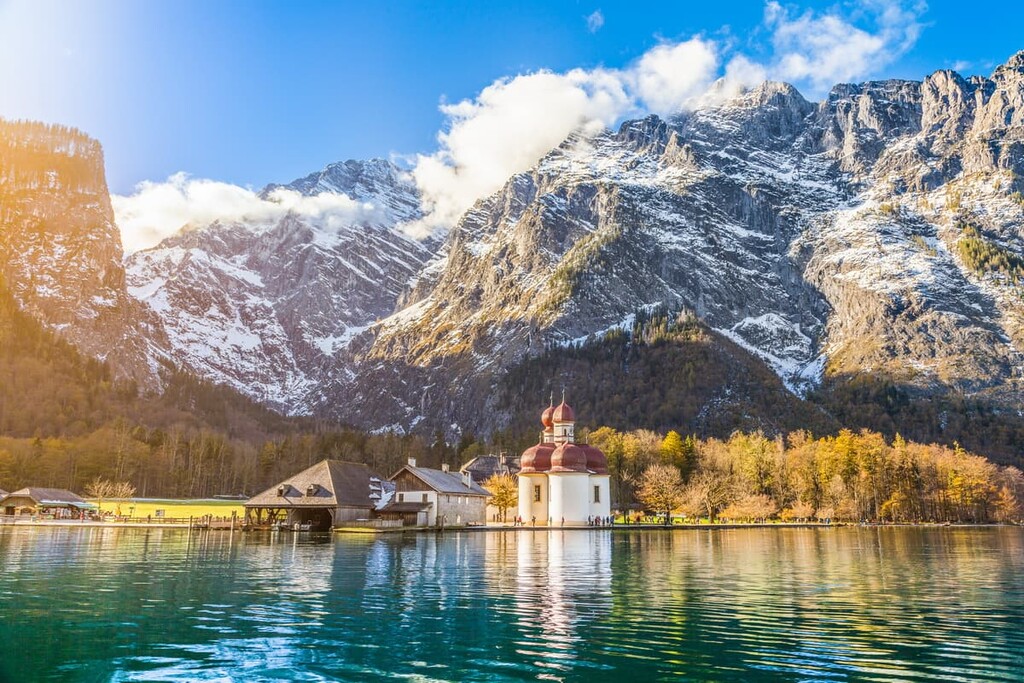 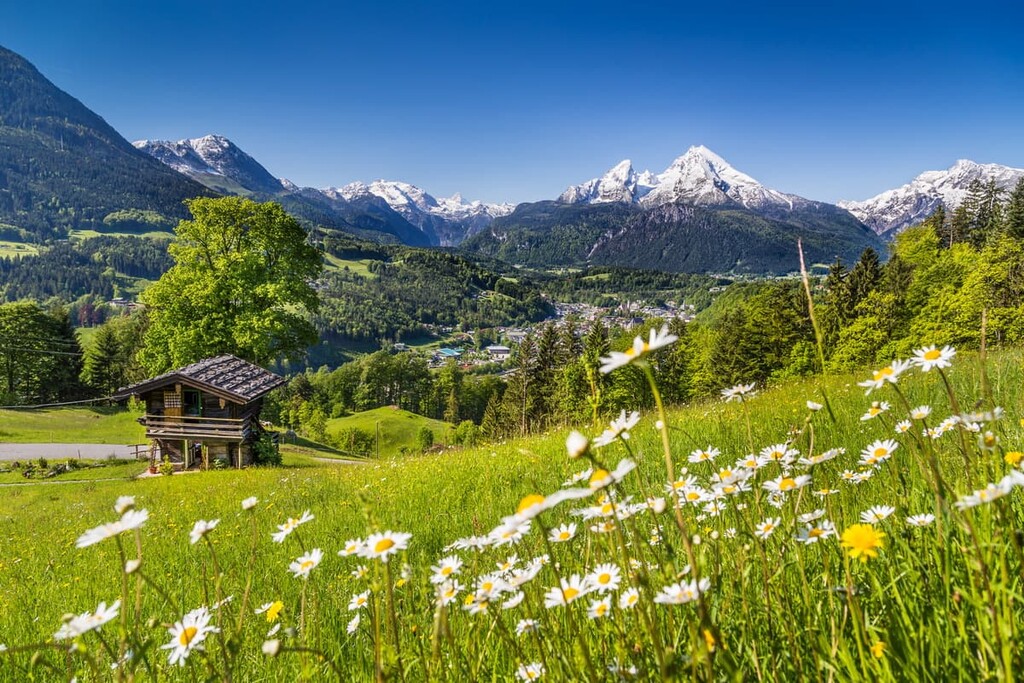 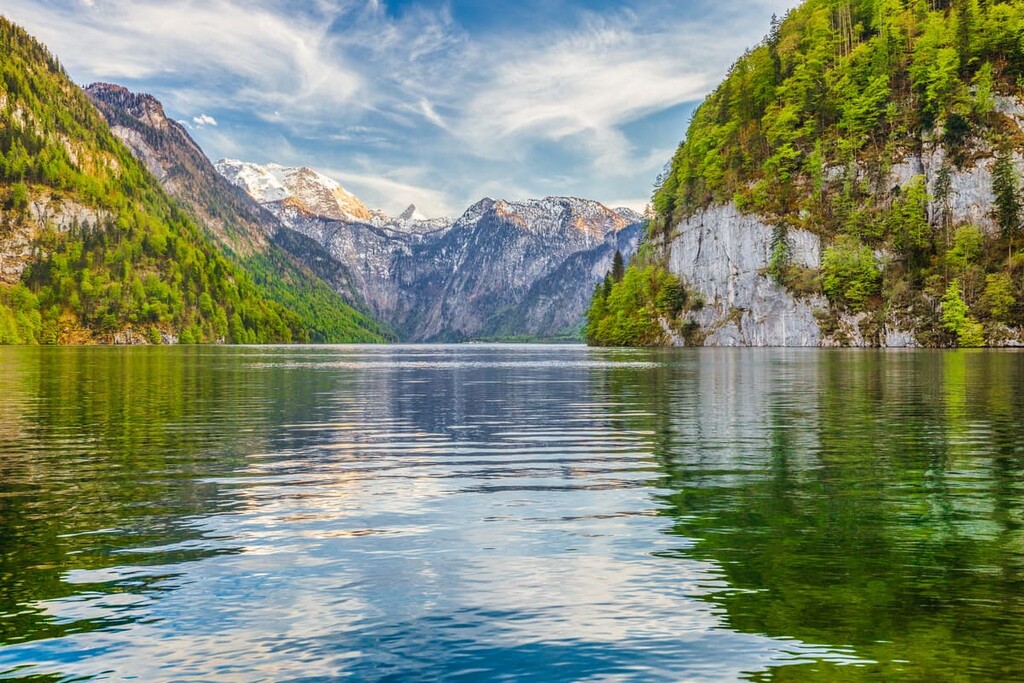 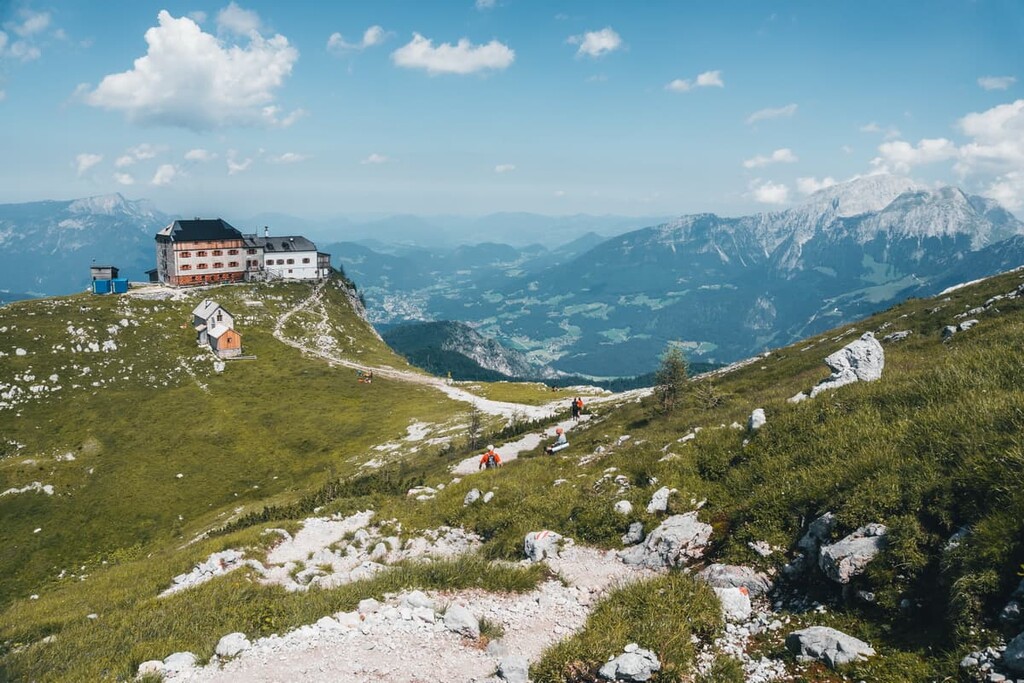 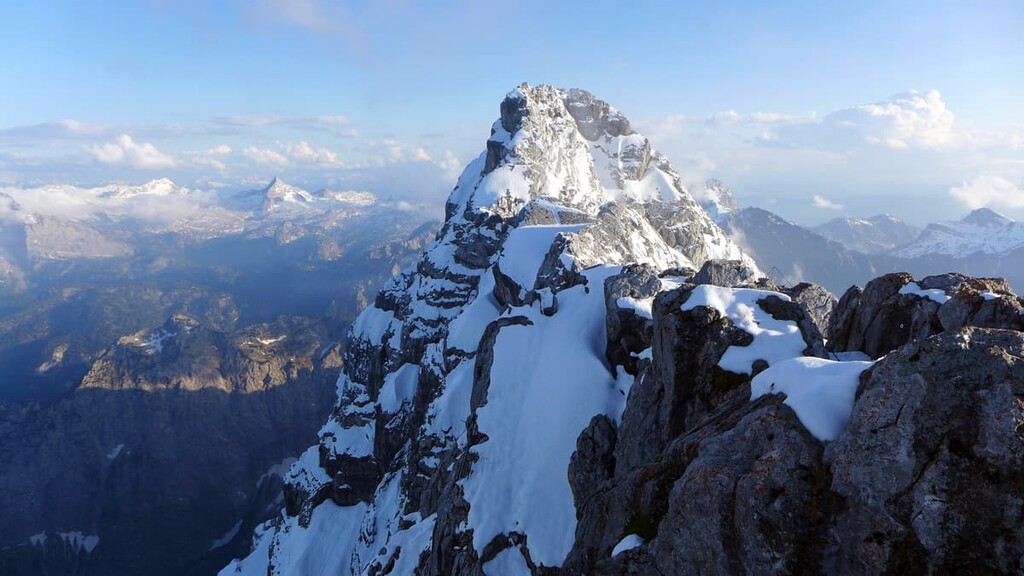