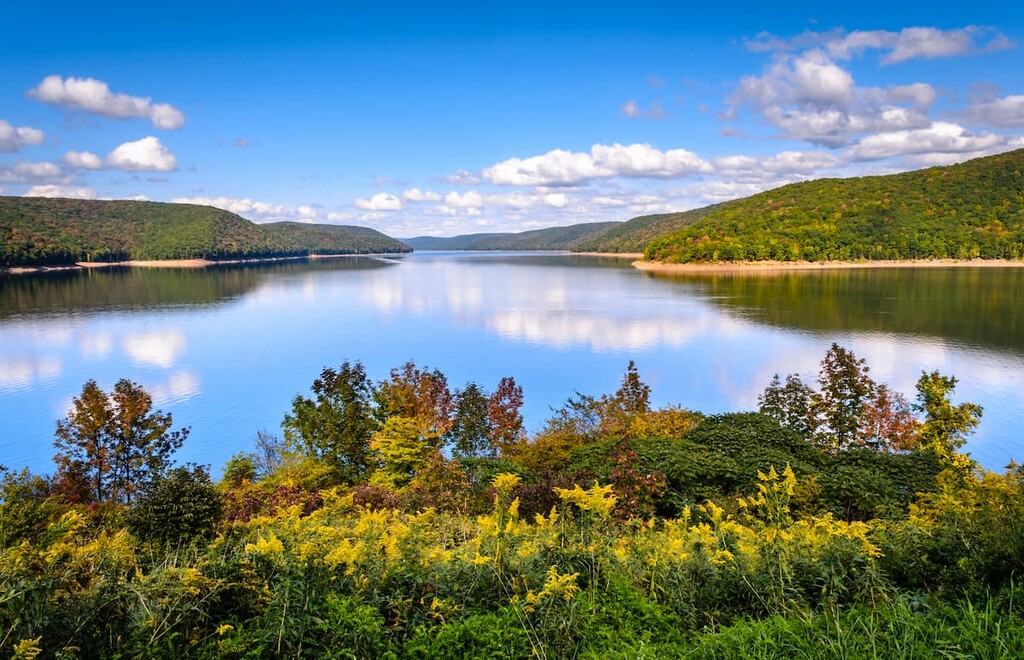 The Allegheny National Forest is nestled in the foothills of the Appalachians about 100 miles (160 km) northeast of the city of Pittsburgh, Pennsylvania. The forest covers 517,000 acres (209,000 ha) of land in Elk, Forest, McKean, and Warren counties.

The Allegheny National Forest sits on the Allegheny Plateau, which tops out at around 2,300 ft (700 m) and features steep valleys that drop more than 1,000 ft (305 m) below the ridges of the plateau.

The Allegheny National Forest is also used extensively for camping, boating, fishing, horseback riding, biking and off-roading. There are over 150 miles (240 km) of mountain biking trails, 53 miles (85 km) of cross country ski trails, and over 100 miles (160 km) of trails accessible to ATVs and dirt bikes.

The Allegheny National Forest is part of the high Allegheny Plateau, itself part of the greater Appalachian region. The plateau was uplifted along with the Appalachians when they were first formed during the aptly named Alleghanian orogeny.

Most of the bedrock in the area is sandstone and metamorphosed sandstone, limestone, and shales arranged in horizontal layers. Rivers and streams cut deeply through the sedimentary rocks of the plateau, leaving the hills and valleys we see today.

Today, there are more than 12,000 active gas and oil wells, with another possibly 100,000 abandoned wells in the national forest. Many were never properly plugged and decommissioned—kayakers have reported methane bubbling to the surface from old wells submerged in the Allegheny Reservoir.

The highest point in Allegheny National Forest is Coal Knob at 2,149 ft (655 m). Other high points in the area include Stony Point, Fools Knob, and Paines Summit. All of these points have less than 300 ft (91 m) of prominence.

The Allegheny Plateau, which was once covered in dense old-growth forests, was almost completely devoid of trees when the national forest was established in 1923. Today, about 90 percent of the land is forested. Black cherry, maple and other hardwood trees promoted by the Forest Service dominate the landscape.

Most of these trees are new growth since 1923, however, the few remaining old-growth forests are some of the largest in Pennsylvania. The Heart’s Content Scenic Area, Tionesta Scenic Area, and Crull’s and Thompson islands in the Allegheny River are all home to old growth forests.

The largest animals in Allegheny National Forest are black bear, white-tailed deer, and coyotes. The area’s deer population is significant enough that overgrazing is a problem for the forest in certain areas.

The forest is also home to porcupines, beavers, and brown bats. Birds in the park include bald eagles, great horned owls, and wild turkey. The old growth forests of Tionesta Scenic Area are home to Swainson’s thrush and yellow-bellied flycatcher, two species rare for the area.

There have been people living in the area around the Allegheny National Forest for thousands of years. Some of the earliest dated evidence of human occupation in North America comes from the Meadowcroft Rockshelter site about 100 miles (160 km) south of the national forest, which could be 14,000 to 17,000 years old.

More recently, the area of Allegheny National Forest was home to members of the Iroquois (Haudenosaunee) Confederacy, particularly the Seneca (Onödowáʼga). Groups of Algonquin-speaking Lenape people from the east were also pushed into the area after European settlement. In fact, it is believed that the name “Allegheny” came from a Lenape term, but precisely what the term means is debated.

By the time of the Revolutionary War, American colonists were largely ignoring British decrees to respect Iroquois holdings and encroaching on their lands, as well as carrying out coordinated campaigns of eradication against eastern Iroqouis tribes in New York.

The Six Nations tried to remain neutral, but were forced to take sides during the war, with most siding with the British. After the war, the new American government pressed the tribes into ceeding the area that is now the Allegheny National Forest and most of northwest Pennsylvania in the 1784 Treaty of Fort Stanwix.

Most of the Iroquois retreated north, settling in Canada at the Six Nations of the Grand River reservation, which is now the most populous First Nations reserve in Canada. Some of the Seneca Nation remained in the area and live today at the Allegheny Indian Territory just over the border in New York. There are over 100,000 members of Tribal Nations that are part of the Six Nations in the US and Canada today.

After American settlers moved into the region, extensive resource extraction took place in the area. Successive generations of clear cutting for agriculture, logging, and the wood chemical industry (which produced products like methanol and charcoal) led to the plateau being virtually stripped of its forests by the early twentieth century.

The deforestation led to constant danger of wildfires and and floods, and many of the large landowners simply abandoned their depleted forests and stopped paying taxes on the land, leading to financial crisis for some of the local communities.

When the Allegheny National Forest was created in 1923, many worried the area was so depleted that trees would never return, but a new and different forest regrew (thanks in part to the over-hunted deer population being so small). The Forest Service selectively managed the land to promote the growth of more valuable timber products and provide a more reliable supply of lumber going forward.

Over time, the Forest Service’s role has evolved to encompass protection of the water supply, wildlife habitats, wilderness conservation and promotion of the space for recreational uses. This is exemplified by the park’s motto, “Land of Many Uses.”

The Allegheny National Forest is large and there are many special zones and scenic areas.

There are numerous campsites in the national forest, and dispersed camping is allowed almost everywhere in the park.

The Allegheny Reservoir is probably the most popular area of the park. In addition to hiking trails, this area also has large campsites and the Jakes Rock Extreme Mountain Biking Trail.

One of the best day hikes in the area is the Rimrock Overlook Trail, which leads 1.3 miles (2 km) one way from Kinzua Beach to a lookout over the reservoir. The trail is mostly steep stone stairs, but it’s only 626 ft (191 m) of climbing.

If you’re looking for a longer hike in the area, the Morrison Trail is a loop trail particularly popular in mid to late June when mountain laurel are in bloom. It gains just 1,279 ft (390 m) over 12.6 miles (20.3 km). Watch out for mountain bikers, who are allowed to use this trail.

Another longer trail, the Tracy Ridge Hiking Trail, can be accessed via the North Country Trail. This trail travels 33.7 miles (54.2 km) through the area near the reservoir and also passes the boat/hike-in-only Handsome Lake Campground.

Coal Knob, the highest point in the Allegheny National Forest, is located in this area. Hikers can access Coal Knob via a 4.3 mile (6.9 km) loop trail, but be aware that the trail is shared with mountain bikers. So hikers should take caution on the trail.

This area, in the northern end of the park, is home to majestic old-growth forests and excellent hiking.

The Heart’s Content Interpretive Trail in Heart’s Content Recreation Area is just 1.1 miles (1.8 km) and loops through a forest with white pine, hemlock and beech trees over 300 years old. There’s also a 5.9 mile (9.5 km) orienteering trail in this area.

In the Tionesta Scenic Area, hikers can experience over 2,000 acres (800 ha) of old-growth forests. There’s a short interpretive trail in the area and the 15.8 mile (25.4 km) Twin Lakes Trail, which connects to the Twin Lakes Recreation Area.

The Clarion River in this area is designated as a wild and scenic river for 51.7 miles (83.2 km). Motorized recreation isn’t permitted and the river has a quiet, remote feel.

The shortest day hike in the area is the Little Drummer Pathway, which has two loops that add up to 3.1 miles (5 km).

Longer trails in the area include the Laurel Mill trail system, a 10.7 mile (17.2 km) series of interconnecting loops used by skiers and hikers, and the Clarion/ Little Toby trail, which is an 18 mile (29 km) rail trail that’s open to bicycles.

This district covers the southern area of the national forest. In Beaver Meadows Recreation Area, there’s a number of short trails under three miles leading around beautiful Beaver Meadows Lake, as well as a campground. The 3.0 mile (4.8 km) Beaver Meadow Trail is one of the most popular.

In the Buzzard Swamp Wildlife Viewing and Hiking Area, hikers, skiers and mountain bikers have access to a 11.2 mile (18 km) system of interconnected trails. This is one of the best areas in the park for spotting birds and animals. There are 20–25 species of waterfowl in the swamp, and hikers frequently see deer, bears, beavers, snapping turtles and bald eagles.

The area around Allegheny National Forest is one of the least densely populated places in the region. There are small towns in the area, with larger cities further afield. Here are some of the best places to check out near the forest:

Located just 10 miles (16 km) from the Kinzua Dam, the town of Warren is a destination for people heading for the Allegheny Reservoir and the northern end of the national forest. The town of about 10,000 people was once home to the most millionaires per capita in the state, due to its proximity to the oil resources in the Allegheny National Forest.

Today, Warren’s historic district stretches 28 blocks. There are over 600 historic buildings in town to check out, too.

Pittsburgh is a historic center of the steel industry, situated on the Allegheny River. Today, it’s home to Carnegie Mellon University, numerous museums, a botanical garden and popular parks, including 24 miles (39 km) of riverfront trails.

Located one hundred miles north of Allegheny National Forest, Buffalo is the second largest city in New York state. Buffalo sits on the shores of Lake Erie, on the border with the Canadian province of Ontario.

Like Pittsburgh, Buffalo is considered a postindustrial city, but it draws millions of tourists every year who pass through the city on the way to nearby Niagara Falls. Visitors can enjoy the revitalized waterfront area and historic architecture in the city. 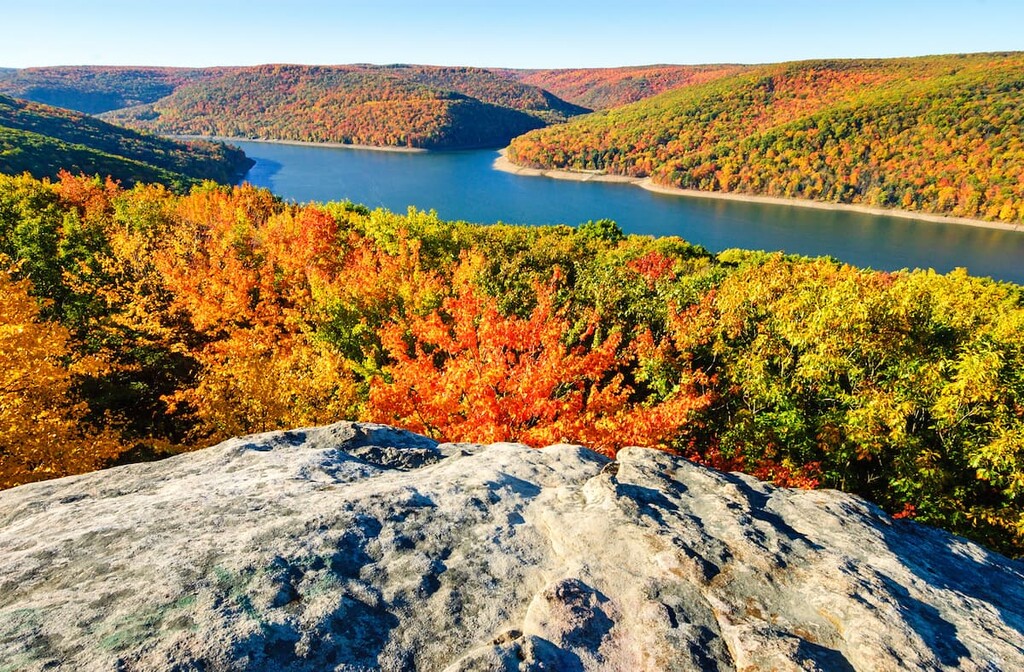 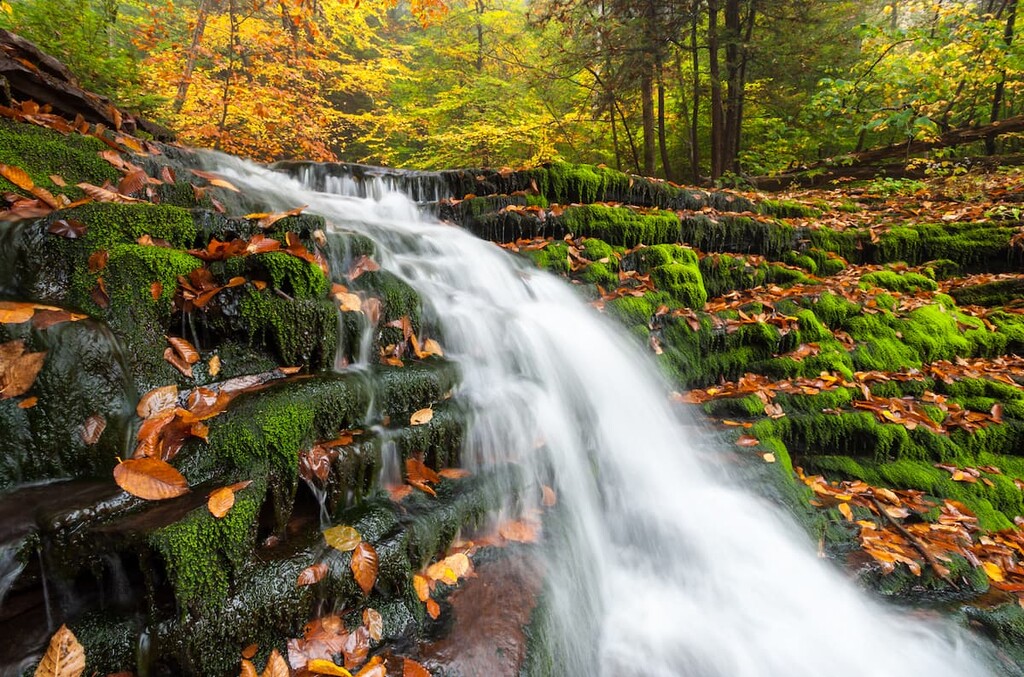 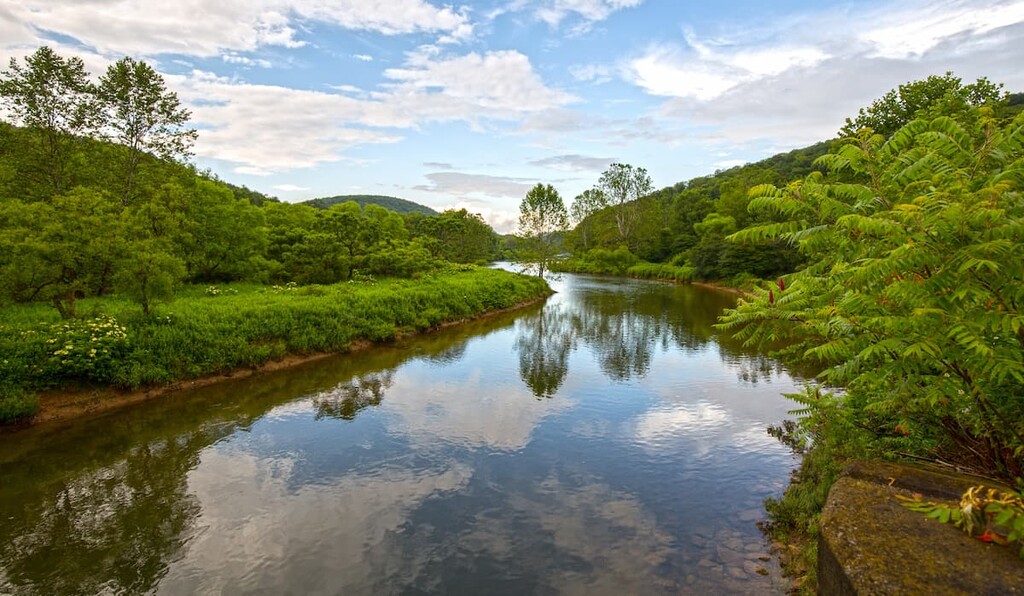 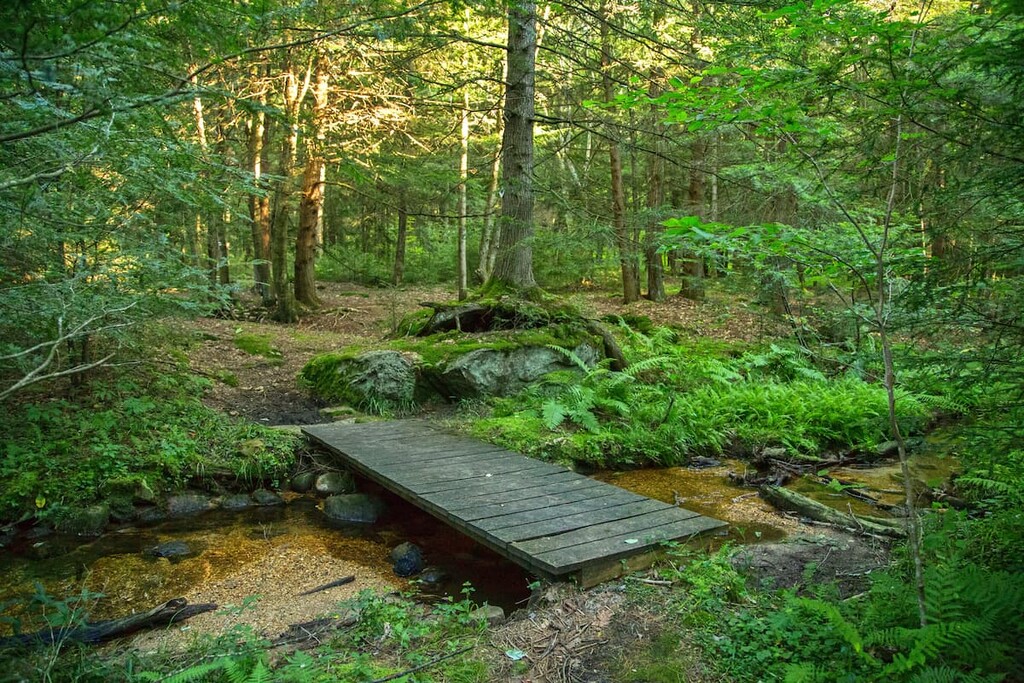 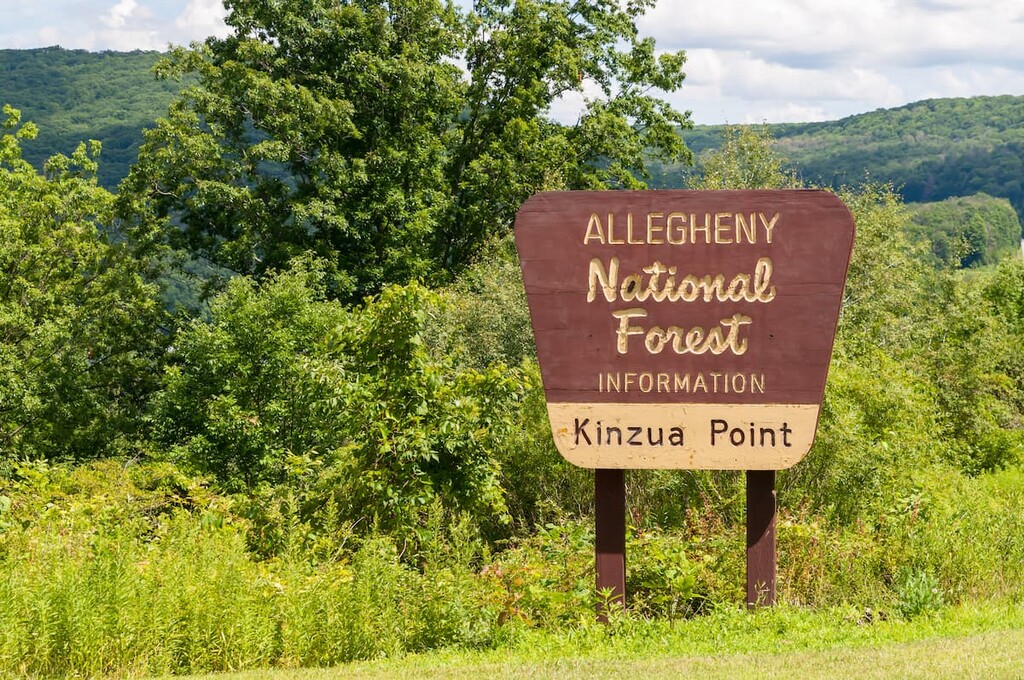 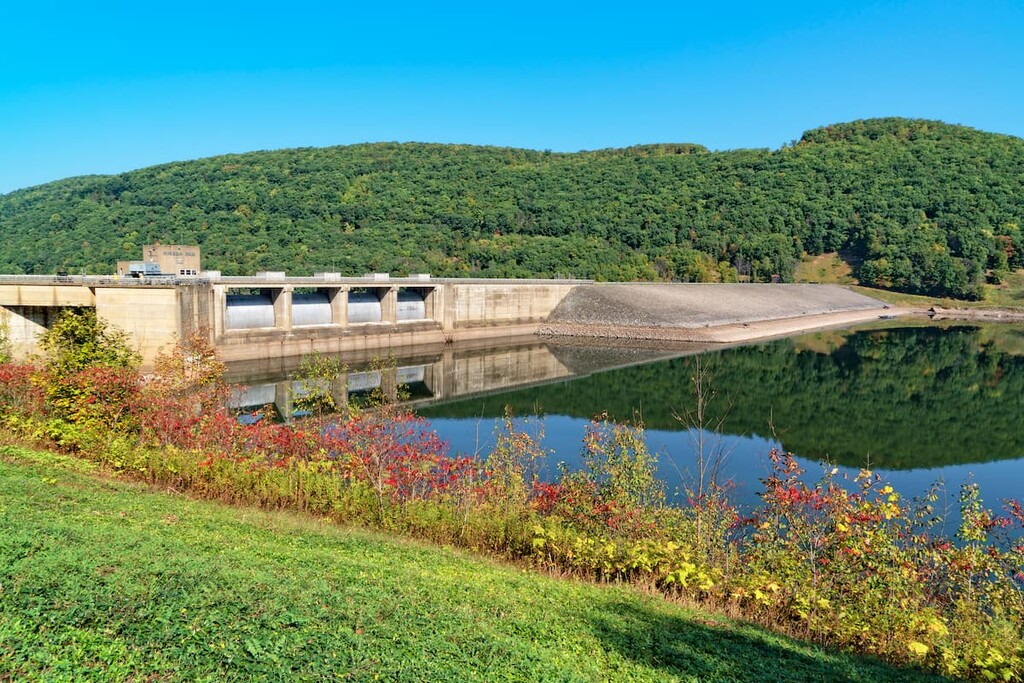 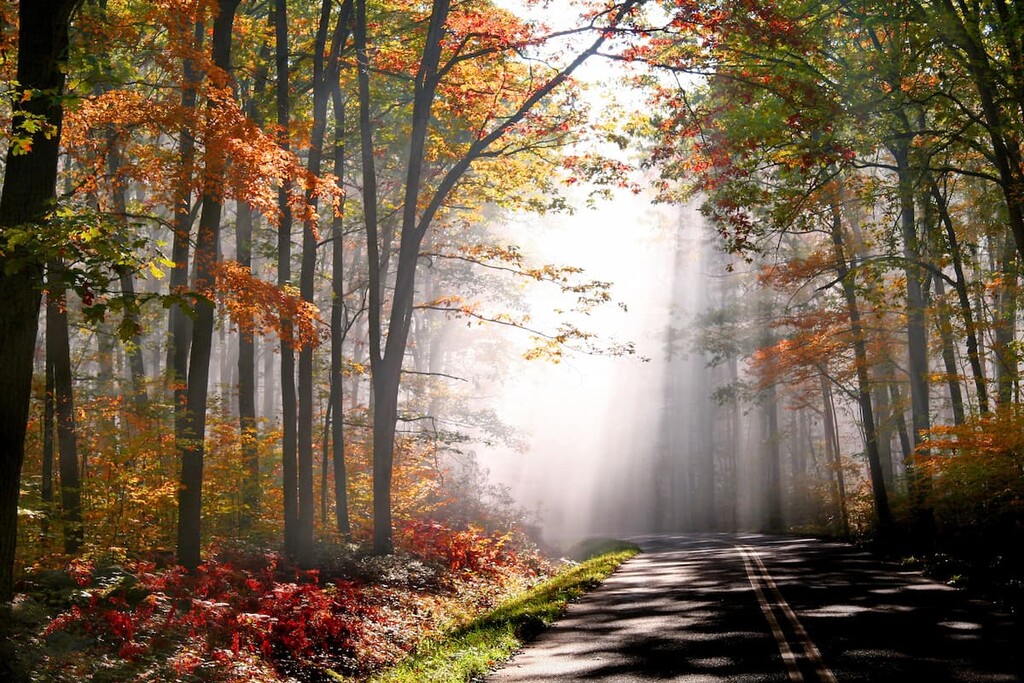 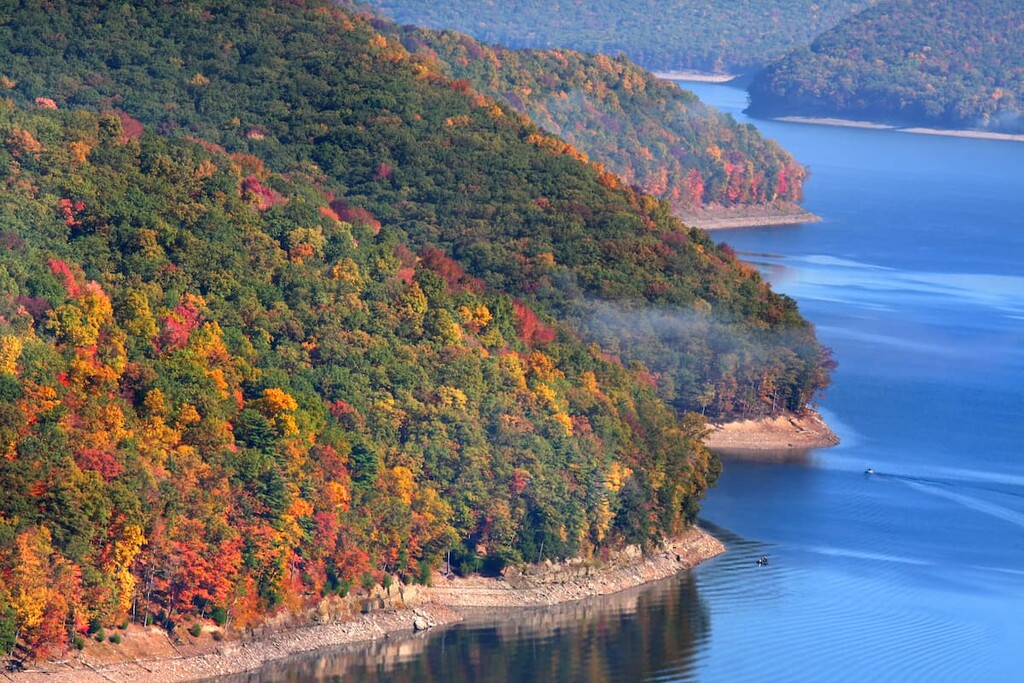