Schaffhausen is the northernmost of the 26 cantons of Switzerland. The canton is divided into three non-contiguous segments. There are 154 named peaks within Schaffhausen. The tallest peak in the canton is Hagen at 912 m (2,992 ft) in elevation and the most prominent is Wannenberg with 181 m (594 ft) of prominence. 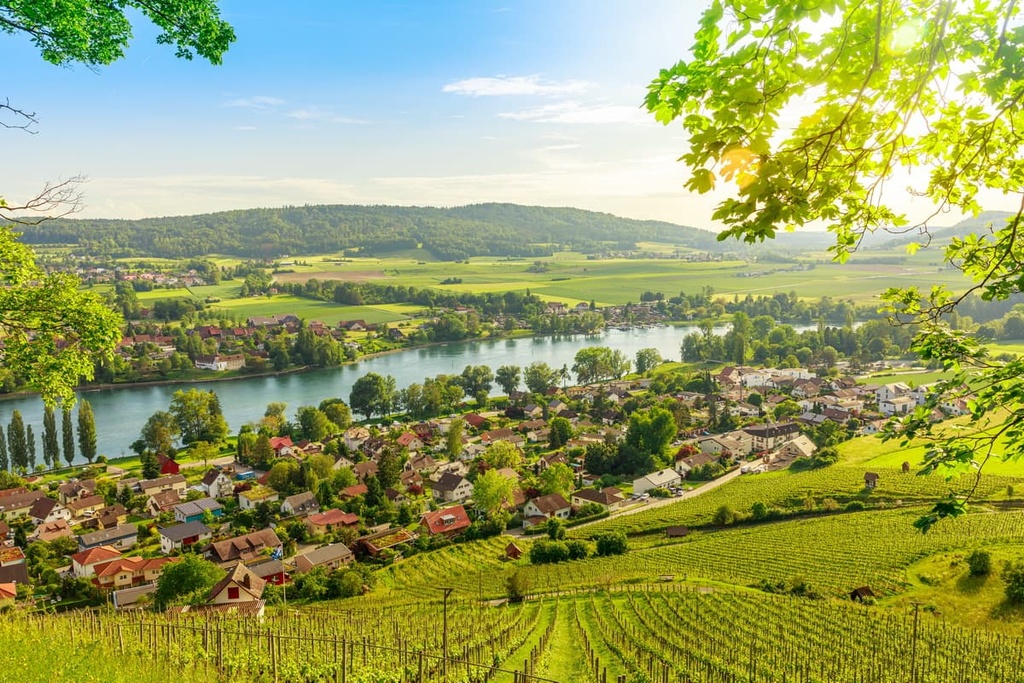 Schaffhausen is situated in northern Switzerland. It spans a total area of 298 sq. km (115 sq. miles). A majority of the canton lies on the northern side of the Rhine River and it is surrounded by Germany on most of its borders.

The canton is divided into three non-contiguous sections, with the largest central section containing the capital of the canton, the city of Schaffhausen. The other two sections lie to the southwest and to the east and they are all bordered by Germany to the north.

Additionally, the canton completely surrounds the German enclave of Büsingen am Hochrhein to the north, west, and east. The enclave is bordered by the Rhine River to the south, which separates it from the cantons of Zürich and Thurgau.

Schaffhausen is situated on a relatively flat plateau and it features a landscape dominated by gentle rolling hills. Nearly 45 percent of the canton has been cleared for agricultural purposes while around 50 percent is forested. Just over 1 percent of the canton is covered in mountains, lakes, and rivers.

The slopes are steeper in the northern portion of the canton, which features the Randen mountain range. Additionally, the Rhine Falls lie on the northern edge of the canton, along the border with Germany. The falls are known for being among the most powerful waterfalls in Europe.

Narrow and shallow valleys can be found throughout the canton, intersecting the rolling slopes of the region. The Rhine River flows from Lake Constance in the east of the canton before traveling north to the North Sea.

The plateau began forming around 60 to 40 million years ago during the Tertiary orogenic uplift. During this time, the region was a karst plateau that sloped to the south.

The Alps, which are located to the south of the canton, were formed when the tectonic plates of present day Africa and Europe collided with one another. This immense pressure resulted in recumbent folds that forced the land upwards, forming the rugged peaks that we see in the region today.

This continual folding also formed the Swiss Plateau and flooded it twice by sea. The plateau experienced four major geological events over the past 40 million years.

The lower sea molasse period dates back 37 to 30 million years ago. During this time, a shallow sea covered the plateau and extended to the Carpathian Mountains. The sediment left behind consisted of sands, clay, and marl. The major folding events that formed the Alps began at the end of this period.

The sea receded around 30 to 22 million years ago, marking the beginning of the Alpine orogeny. Folding and uplift during this period resulted in drastic changes in the landscape due to erosion.

Though relatively small in size, Schaffhausen is home to a variety of both flora and fauna. Broadleaf forests can also be found throughout the entire plateau. These forests contain silver firs and European beeches.

The dominant trees found in the canton are maple, oak, and tilia. Dozens of flower species thrive in the semi-arid climate of the region. Common flowers include butterfly bush, cornflower, common spotted orchid, sweet woodruff, anemone, and various others.

Humans began inhabiting regions of the Swiss Plateau around what is now the canton of Schaffhausen during the Neolithic period. Many of these early settlements formed around the region’s various lakes and rivers.

Schaffhausen was a city-state throughout the Middle Ages, having its own currency that dates back to 1045 CE. The community began to grow in size following the establishment of a Benedictine monastery, eventually gaining independence in the year 1190.

In 1330, the town was conquered by the Habsburgs, though Schaffhausen was able to buy its freedom shortly after in 1418. By 1501, Schaffhausen became a full member of the Old Swiss Confederacy.

During the Thirty Years’ War, the canton was heavily damaged by the Swedish and Bavarian troops who burned down the major bridge of the city of Schaffhausen. Industrial development of the region finally recommenced again in the nineteenth century.

The first railroad in the canton was constructed in 1857 to connect Winterthur to Schaffhausen. In 1876, the cantonal constitution was written. It was later revised in 1895 and this is the constitution that remains in effect in the canton to this day.

Nowadays, the economy of Schaffhausen is highly integrated with that of neighboring Zurich. The canton is known for its white Riesling wine production as well as its manufacturing industry. Schaffhausen is also a major exporter of hydroelectric power. Additionally, the canton is home to the luxury watch manufacturer IWC International Watch Co. AG, which is also known as IWC Schaffhausen.

Schaffhausen is home to numerous trails for hiking and outdoor recreation. Here are some of the most popular trails in Schaffhausen:

The Rhine Falls Trail is one of the most popular routes in the canton. This loop trail is 4.3 km (2.7 miles) long with 158 m (518 ft) of elevation gain. Visitors to this trail can witness the rushing waters of one of Europe’s largest waterfalls.

Following along either side of the Rhine River, the Rhine Falls Trail offers stunning views throughout its course. Hiking the route often takes around two hours, though it’s worth allocating more time for this adventure if you want to enjoy the scenery at the falls.

The Schaffhauser Grenzweg Trail connects the Rhine Falls region to the winegrowing hillsides in Wilchingen-Osterfingen. The route is 14 km (8.7 miles) long and it has 360 m (1,181 ft) of elevation gain.

Passing through pastures and forests, the route showcases a few historical landmarks within the canton. For example, the ruins of the Radegg Castle stand atop Rossberg Mountain, offering stunning views of the Klettgau Valley wine region. The route is also commonly used for wildlife viewing.

The Schaffhausen - Stein am Rhein route is a point to point trail connecting its two namesake communities. The route is 20 km (12.7 miles) long with 321 m (1,053 ft) of elevation gain.

Hikers walk along the Rhine River, passing cities along with pastures and wooded regions. The gravel path can also be used for running and bird watching.

Looking for a place to stay in Schaffhausen? Here are some of the best cities and villages to check out in the canton:

Stein am Rhein is a historic town located in the eastern section of the canton. The town is home to 3,500 residents and features a medieval commercial center that still retains its ancient street plan. The old city wall still stands, though modern houses have since been built into the structure.

Known for its architectural heritage, the town of Stein am Rhein lies along the western shores of the Untersee as it flows into the Rhine. The car-free historic town center has won awards for the number of well-preserved buildings it features in such a compact space. As it is situated next to a railway station, Stein am Rhein also offers easy access to the rest of the canton. 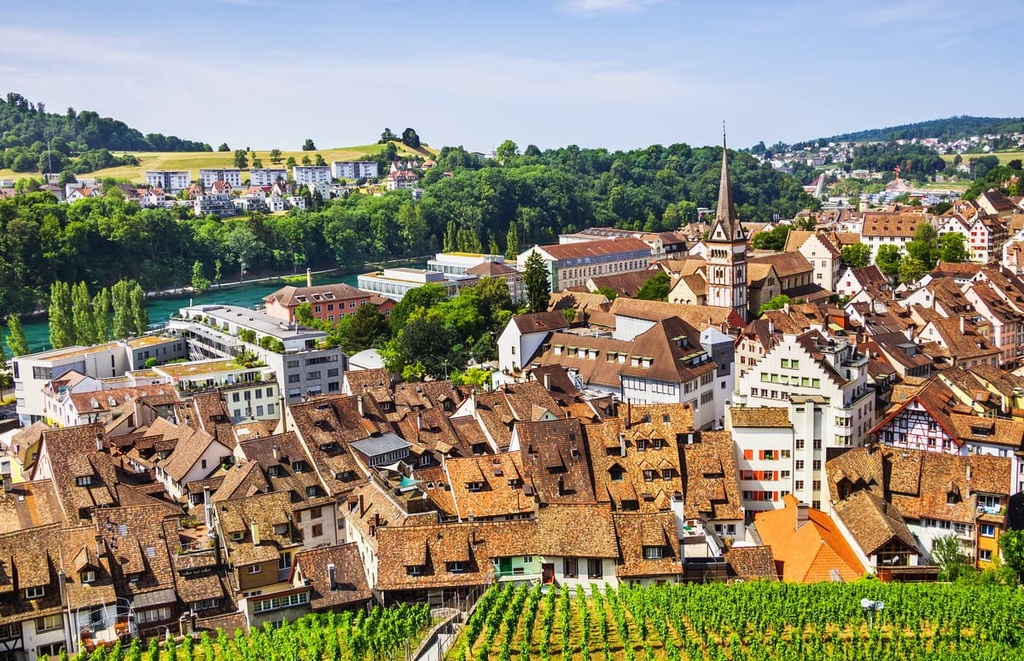 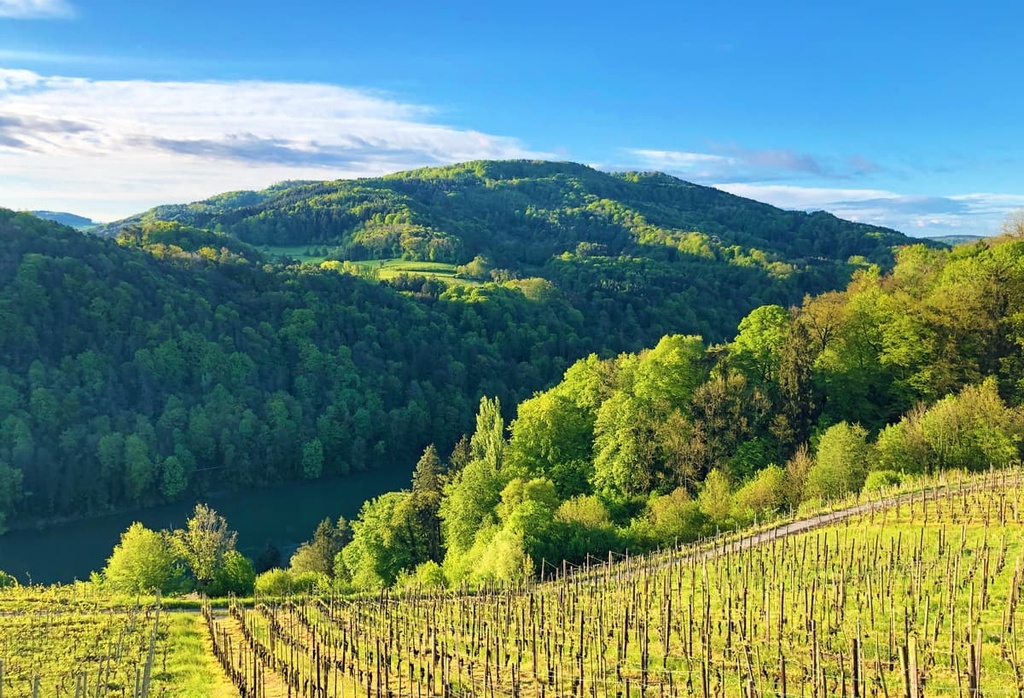 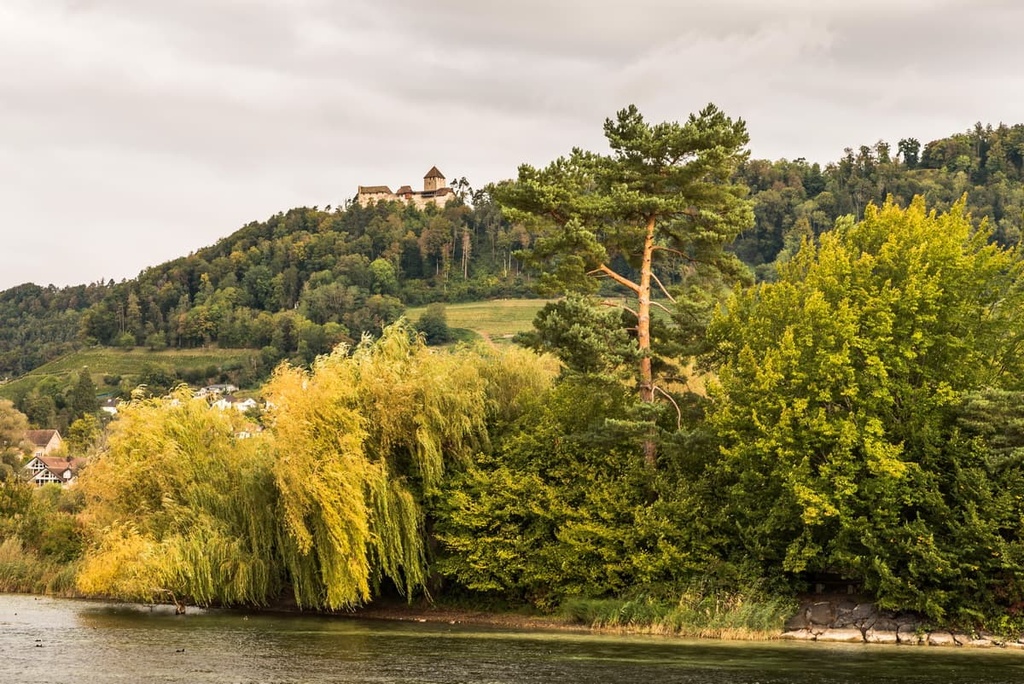 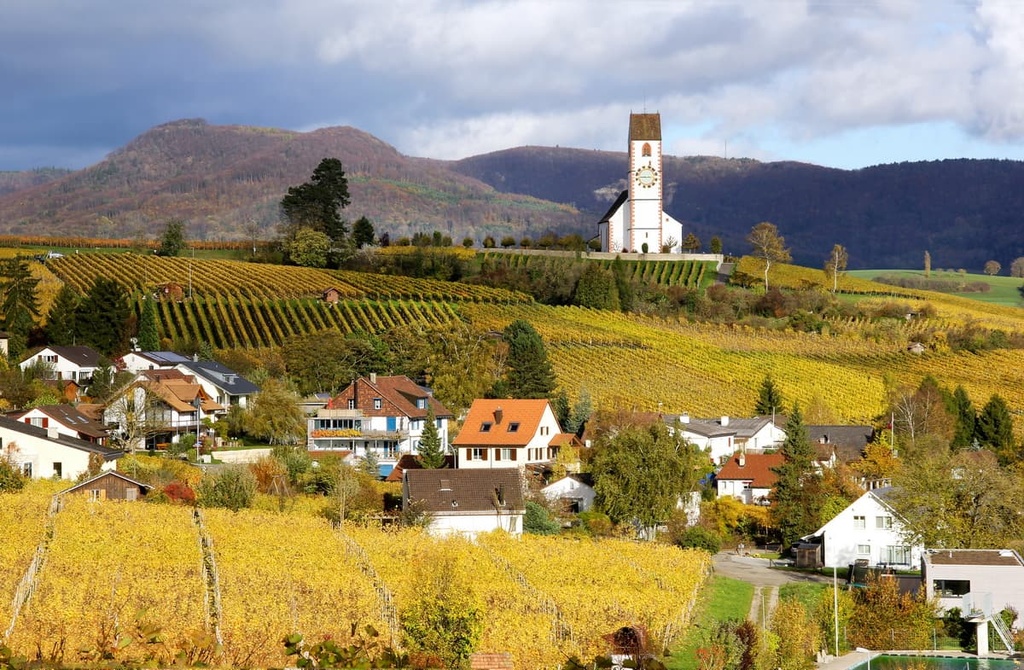 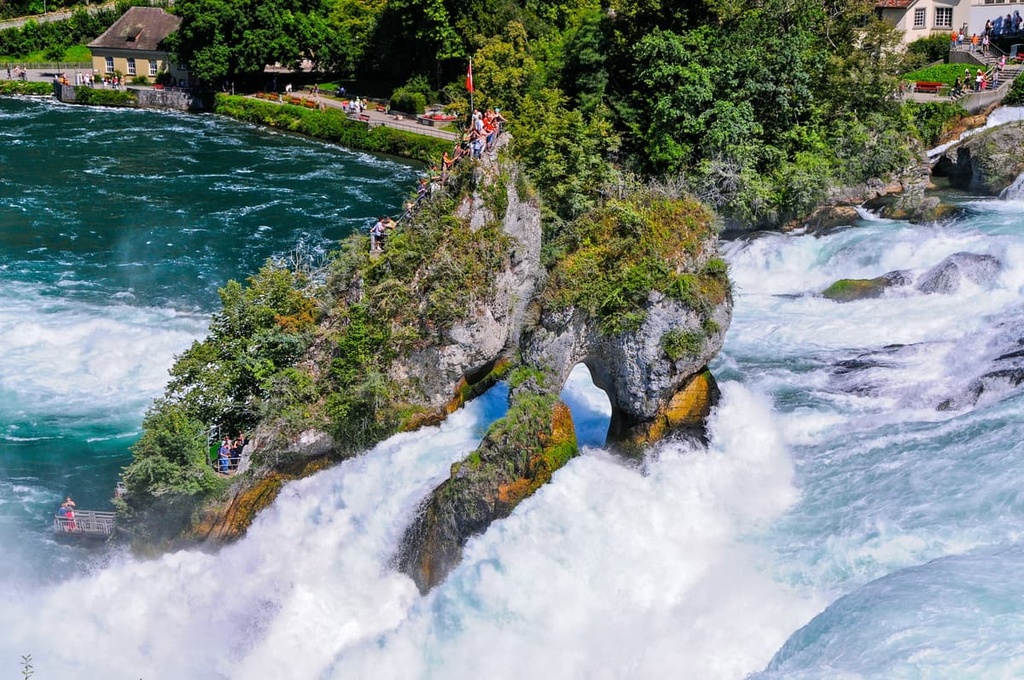 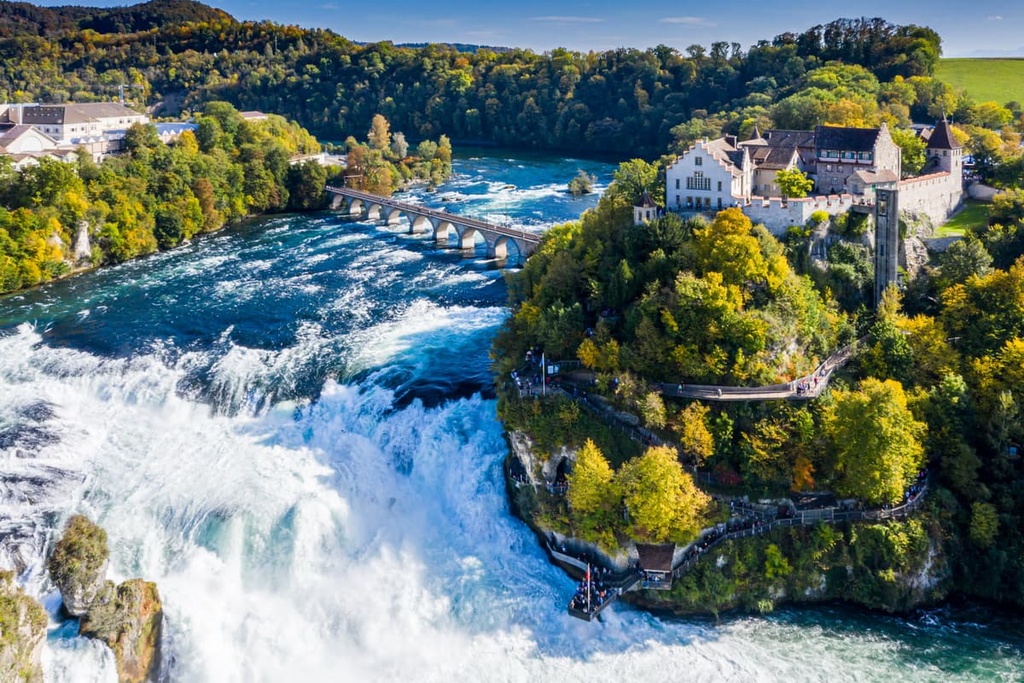