The Cowichan Valley Regional District is an administrative area located in the southern part of Vancouver Island in the Canadian province of British Columbia. It has a mix of stunning mountains, rugged coastline, and ancient forests. There are 60 named mountains in the region, of which Mount Whymper is the tallest with 1,543 m (5,062 ft) of elevation and Towincut Mountain is the most prominent with 1,053 m (3,455 ft) of prominence. 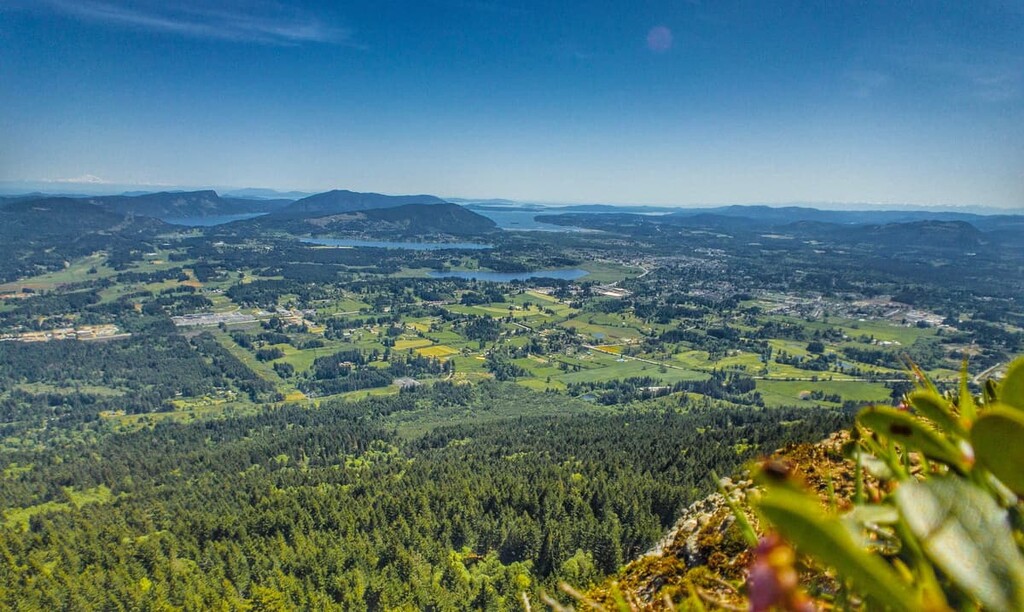 Located toward the southern end of Vancouver Island, British Columbia, Canada, the Cowichan Valley Regional District is an administrative region that is home to the major communities of Duncan. It also has 54 named mountains and spans from the east to west coast of Vancouver Island.

The region stretches from the Saanich Inlet in the south to Nitinat Lake in the north and encompasses Cowichan Lake, as well as eight regional parks, two regional trails, and a handful of other recreation areas. The following are the major parks and recreation areas in the Cowichan Valley Regional District:

The Wrangellia terrane continued to grow as the crust split and lava flowed to the surface of the Earth creating basalt, which is among the most common rock types on Vancouver Island. Lava that flows above ground or into the ocean often cools quickly and forms basalt, while undersea lava and igneous intrusions into sedimentary rock cool slower creating granite which can be metamorphosed into gneiss.

In the middle of the Sevier orogeny and throughout the Laramide orogeny, as the Insular and Farallon tectonic plates collided with the west coast of the North American plate, Wrangellia, which was floating on top of the Farallon plate was scraped from the plate and stuck, or accreted, to the mainland.

Parts of Wrangellia buckled to form mountains while other parts crumbled and eroded. Wrangellia terranes make up part of southeast Alaska, the Queen Charlotte Islands, part of the Coast Mountains, and Vancouver Island. The mountains that formed on Vancouver Island are the Vancouver Island Ranges, and the Seymour Range lies south of Cowichan Lake in the Cowichan Valley Regional District.

The oldest rocks of the Cowichan Valley are layers of Paleozoic sedimentary and volcanic rocks. The Paleozoic layers are intruded by mafic sills and overlain by successive layers of basalt, limestone, argillites, and tuffaceous sediments. Further layers of marine sediment and volcanic rock are layered, all of which have igneous intrusions from the Jurassic.

Glaciers scoured the landscape of Vancouver Island and the Cowichan Valley during the Pleistocene, with ice sheets reaching over a kilometer of thickness over the island. The Fraser Glaciation, which occurred between 29,000 and 15,000 years ago, created most of the current topography of the mountains and the receding glaciers left evidence of their passing.

The glaciers carved deep, wide, U-shaped valleys across the region and left deposits of glacial till. Piles of till left behind at the foot of retreating glaciers are called moraines, and other glacial till formations include eskers and kames. As the sea level rose from the melting ice, some of the glacial valleys along the coast were filled with sea water, creating the fjords on the west coast of Vancouver Island.

The Cowichan Valley Regional District spans from the east to west coast of Vancouver Island and includes coastal and mountainous ecosystems. The east coast of the region lays in the rain shadow of the Seymour Range and experiences a dry, Mediterranean like climate with towering Douglas fir and arbutus and Garry oak, which are unique to Vancouver Island, and are found nowhere else in Canada.

The rest of the inland and west coast of the Regional District of Cowichan is dominated by the Coastal Western Hemlock Ecozone, and the Mountain Hemlock Ecozone at the summits of the region’s mountains.

These rainforests are dominated by western hemlock and amabilis fir at the lower elevations; however, massive 100 m (330 ft) Douglas firs can be found here, too, along with enormous western red cedars and Sitka spruce, both of which can reach upwards of 4 m (13 ft) in diameter.

Vancouver Island has a community of over 3,000 black bears, as well as countless Columbian black-tailed deer, cougars, and grey wolves. The coastal waterways around the island are also home to sea lions, dolphins, orcas, gray and humpback whales, and many more marine species.

Archaeological evidence of the region shows a history of human inhabitation that dates back at least 4,500 years in the Cowichan Valley and surrounding areas of the region. Many of the First Nations of Vancouver Island refer to a great flood as part of their origin story, and that they are the descendants of those that survived this flood.

The archaeological evidence of the first peoples of what is now Cowichan Valley Regional District include a number of midden heaps, fishing weirs, and the occasional outline of an ancient village.

Many of the First Nations of this region traditionally followed a seasonal movement pattern around the region to take advantage of the island’s abundant resources. For example, some communities would move between coastal residences for harvesting from the ocean and to the rivers and streams to harvest salmon during their annual run.

At the end of the harvesting season, different communities and tribal nations would come together to trade the extra resources they had acquired for resources from other nations. During the winters, many communities and families would gather in their winter villages in the Cowichan Valley. Longhouses were a common winter residence, and several families would occupy the same house during the winter.

Settlers of European descent started arriving in the Cowichan Valley Regional District towards the end of the nineteenth century, especially as the railway was built to connect Victoria to Nanaimo. Agriculture was the first economic driver of the valley; however, logging, coal mining, and copper mining on Mount Sicker helped the region prosper in the twentieth century.

Spanning the east to the west coast of Vancouver Island, the Cowichan Valley Regional District is full of spectacular wilderness, lakes, rivers, and coastline. The following are some of the major hiking areas in the region.

Located on the west coast of Vancouver Island, Carmanah Walbran Provincial Park is a wilderness sanctuary and one of the most remarkable wilderness areas on Vancouver Island. The park offers protection to some of the island's last remaining old growth forest.

The coastal fringe of Sitka spruce forests is rarely found more than 80 km (48 mi) from the coast and at elevations higher than 30 m (100 ft). These coastal spruce forests have nearly twice the biomass per acre than tropical forests.

In addition to the Sitka spruce, 1,000-year-old cedars grow in the hills of the park, adding to the majesty and reverence of the area. The ecosystem is ancient and works perfectly—when left undisturbed.

The park is full of trails that lead among some of the largest trees in the park, in addition to spectacular viewpoints and lookouts. Some of the trails to hike are Coat Tower, Three Sisters, Paradise Pool, August Creek, Heaven Tree, and the Randy Stoltmann Commemorative Grove, named for the man who dedicated a part of his life to saving the old growth forests on Vancouver Island.

Lake Cowichan is central to the Cowichan Valley Regional District and contains a wealth of wilderness and recreational activities.

Other areas to visit while at Lake Cowichan include Robertson River Falls, Bald Mountain Park, and Mile 77 Park. There are many rugged wilderness areas around Cowichan Lake to explore because the logging leases have prevented development that often occurs around such beautiful areas.

The town of Ladysmith is located in the Cowichan Valley, along the east coast of Vancouver Island. There are many hiking trails to explore while in the area. Trails follow Stocking Creek and they lead to both Heart Lake and Christie Falls. The town has beautiful coastal parks for relaxing and picnicking, as well as community and regional trails, such as the Holland Creek Trail.

Towns and Cities around the Cowichan Valley

Located about 45 km (27 mi) from Victoria to the south and Nanaimo to the north, Duncan is a small city located on the east coast of Vancouver Island. While Duncan has a population around 5,000 people, it serves as the commercial and service center for the Cowichan Valley, which has a population over 80,000 people.

In 1886, when the inaugural train for the newly built Esquimalt and Nanaimo Railway was heading north from Victoria to Nanaimo, carrying Prime Minister Sir John A. Macdonald, there was no stop planned for the town at Duncan. However, a group of 2,000 people had gathered at a level crossing nearest the town and the train came to an unplanned stop, literally putting the town on the map.

Since the nineteenth century, the town has grown, thanks to the abundant natural resources of the region. The town currently has one of the largest collections of totem poles, many of which were made by citizens of Cowichan First Nation.

Located about 45 km (27 mi) north of Duncan, Nanaimo is one of the region’s major ferry ports, receiving thousands of passengers a day to Vancouver Island. Originally built as a coal town as people could mine the rich coal seams near the town, Nanaimo has grown to be an industry, service, and transportation hub for central Vancouver Island.

While visiting Nanaimo, there are many activities and places to explore, including many of the heritage sites and buildings around the city. There are also many beautiful coastal and wilderness areas worth visiting. Ammonite Falls, Beach Estates Park, Blueback Beach, Bowen Park, and Buttertubs Marsh are just several of the many areas to explore.

During the Fraser River gold rush in 1858, more than 30,000 miners came through Victoria to purchase their British Columbia mining license before heading to seek their fortunes in the gold rush. The provincial capital has grown substantially thanks to the fact that it is the seat for the provincial government, and the fact that it has a naval base, as well as strong agriculture, mining, logging, transportation, and tourism industries. 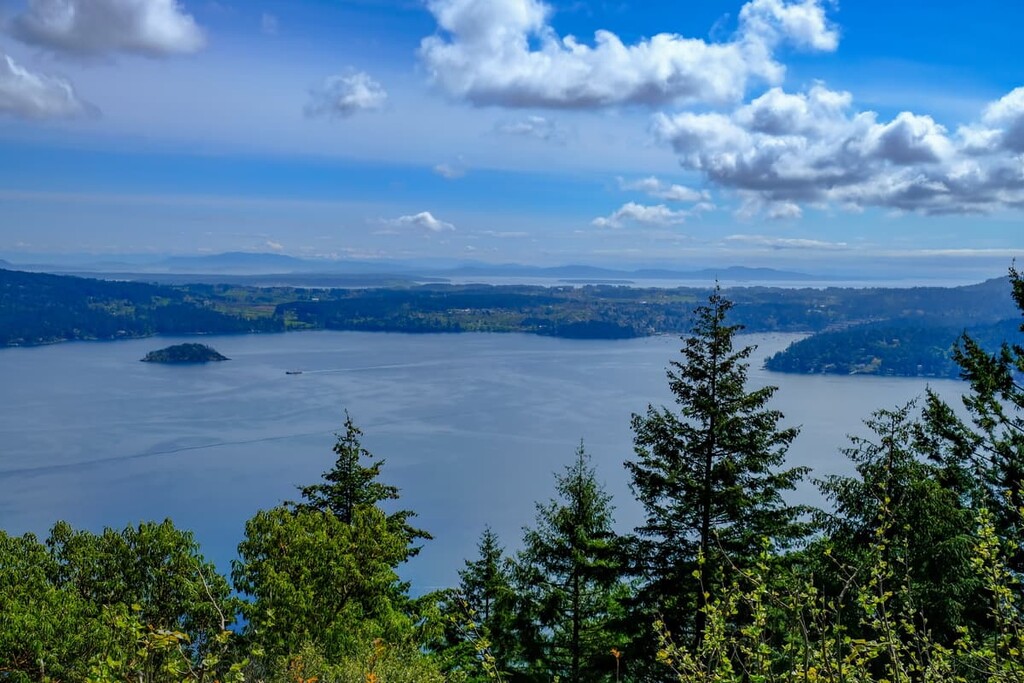 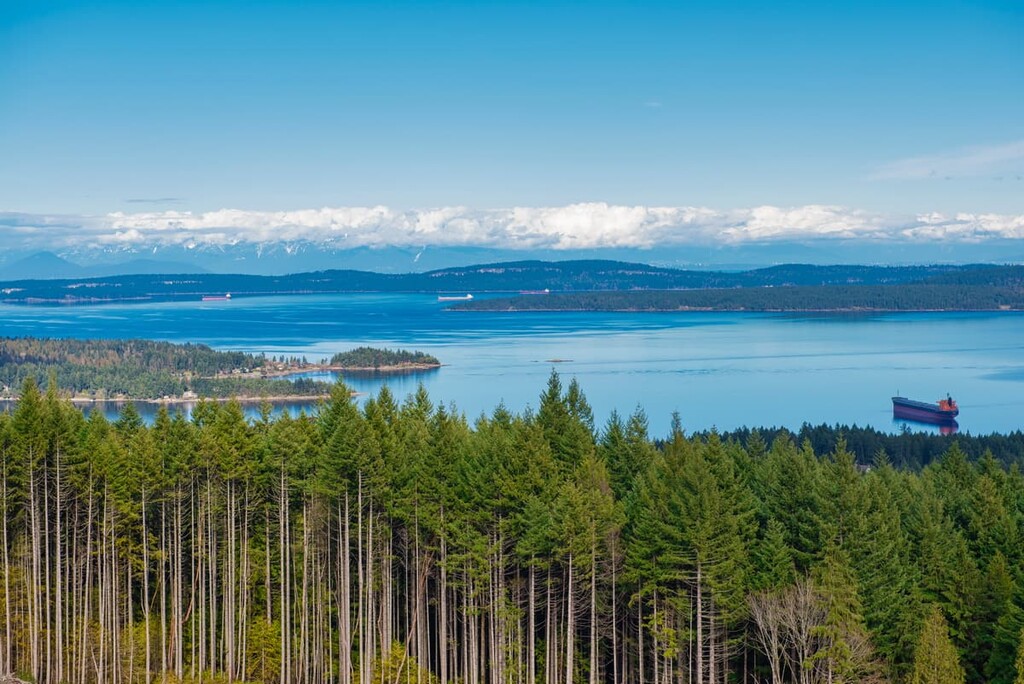 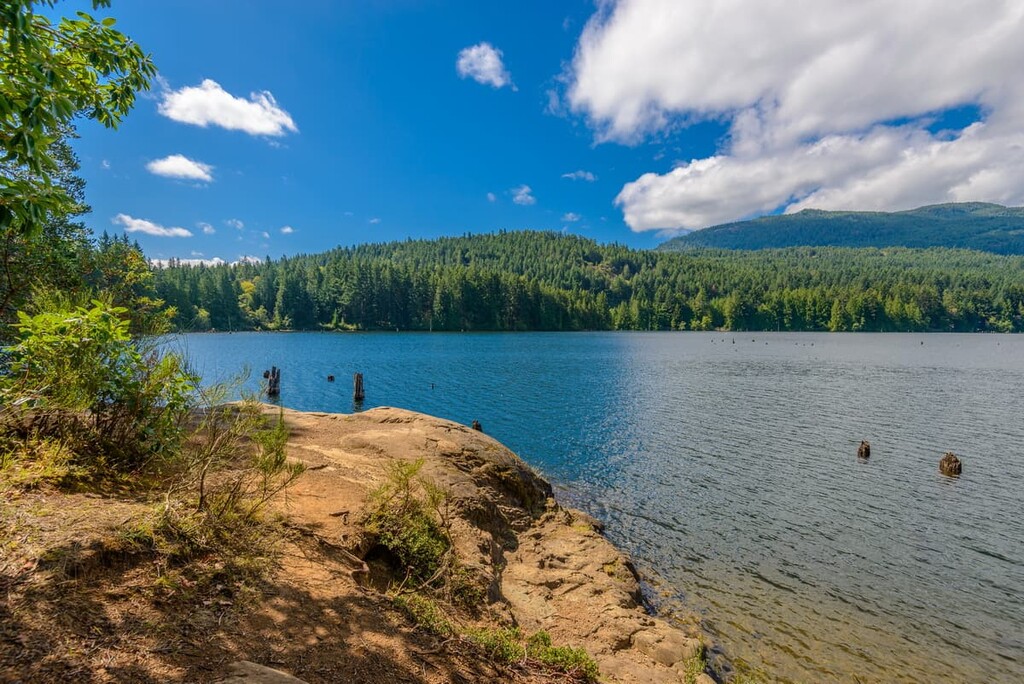 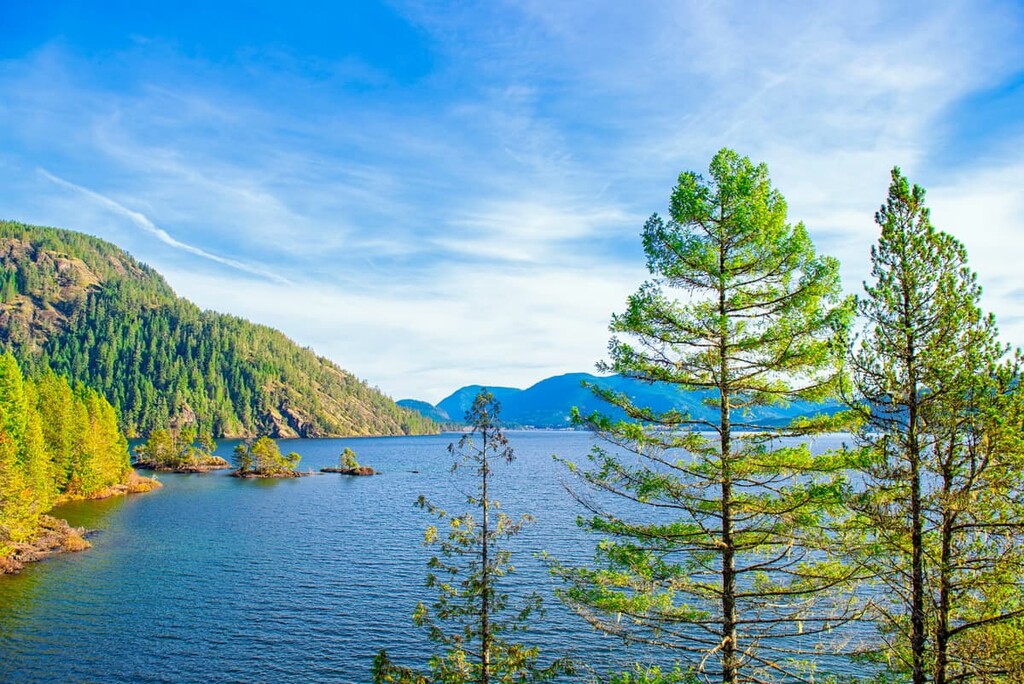 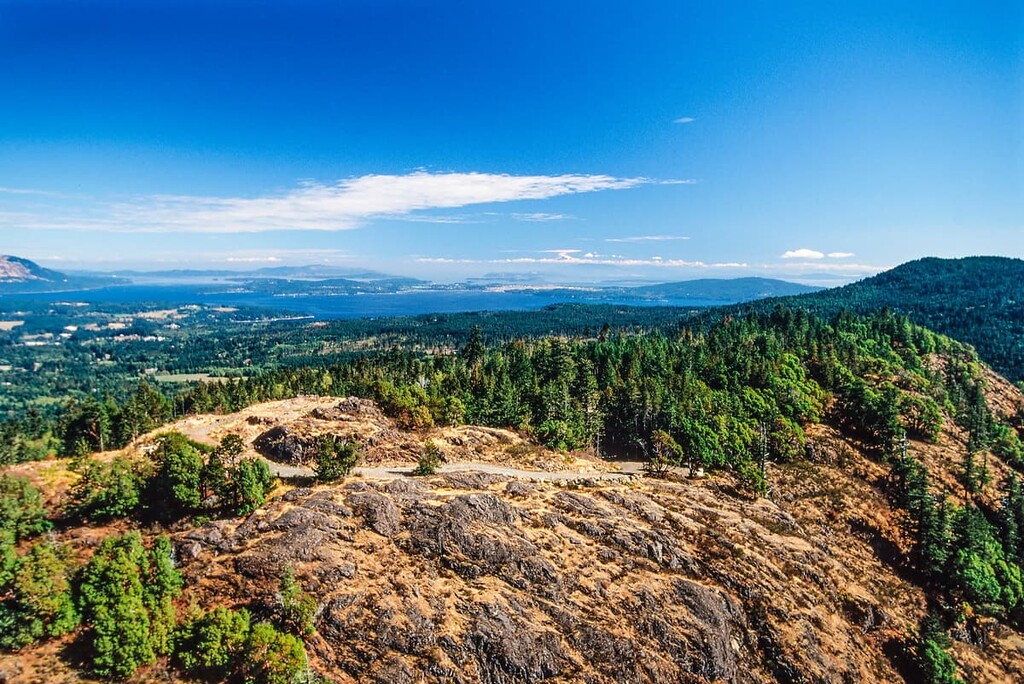