4 274 m
Elevation
Elevation is the altitude of a place
above sea level.

498 m
Prominence
Peak’s prominence is the least
vertical to be covered to get from the
summit to any other higher terrain.

Proportional Prominence 3 256 m
14er
Mountains higher than 14 ⁠000 ⁠ft / 4 ⁠267 ⁠m with at least 300 ⁠ft / 91 ⁠m of topographic prominence.
Location
38.060564 N  -107.511099 W
Wetterhorn Peak (Wetterhorn is German and means Weather Horn) is a fourteen thousand foot mountain peak in the U.S. state of Colorado. It is located in the Uncompahgre Wilderness of the northern San Juan Mountains, in northwestern Hinsdale County and southeastern Ouray County, 9 miles (14 km) east of the town of Ouray. It lies 2.75 mi (4.4 km) west of Uncompahgre Peak.

Wetterhorn Peak, and its neighbor Matterhorn Peak, 13,590 ft (4,142 m), are named after the Wetterhorn and the Matterhorn, two famous peaks in the Swiss Alps. Both Colorado peaks are pointed rock spires (hence resembling their namesake peaks), whose shapes contrast with the broad bulk of the higher Uncompahgre Peak.

The first recorded ascent of the peak was made in 1906 by George Barnard, C. Smedley, W. P. Smedley, and D. Utter, but a previous ascent by miners working in the area in the 19th century is likely.

The standard, and only common, route on Wetterhorn Peak is the southeast ridge, which is accessed via the Matterhorn Creek drainage on the south side of the mountain. The trailhead is on the Henson Creek Road, accessible from Lake City. The route involves 3,535 ft (1,077 m) of ascent from the trailhead and some exposed scrambling (Class 3/4) on the ridge itself. The nearby east face is considered a high-quality advanced snow climb or extreme ski descent.
There's a trail called Wetterhorn Peak Climber's Route leading to the summit. 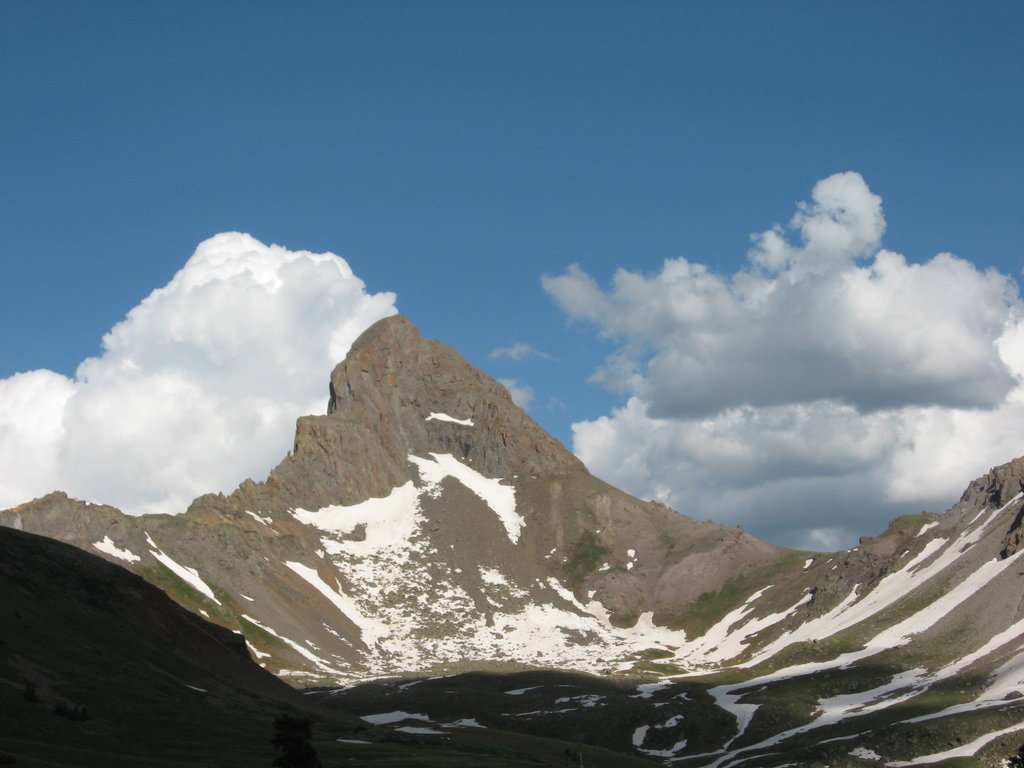 38.071667 N   -107.464167 W
Nearest Higher Neighbor
Uncompahgre Peak - 4.4 km ENE
El: 4 366 m / Prom: 1 304 m
Check out a downloadable 3D model of Wetterhorn Peak area. A higher resolution model can be found in the PeakVisor mobile app.
Do you have photos of Wetterhorn Peak or know something about it? Please let us know!