Nanda Devi National Park (Nanda Devi and Valley of Flowers National Parks) is a protected area located in the northern stretches of India that’s known for its mountainous landscape. The park is located in the Uttarkashi District region of the state of Uttarakhand in northern India. It contains 20 named mountains, the highest and most prominent of which is Nanda Devi (7,816 m/ 25,643 ft).

Nanda Devi National Park is situated in northern India in the Uttarkashi District of the state of Uttarakhand. The park spans 624 square km (241 sq. mi) of land across an extremely mountainous part of the country.

Nanda Devi National Park surrounds the peak of Nanda Devi, which also happens to be the second highest peak in all of India. The mountains in the park are part of the Garhwal Himalaya which are a subrange of the eastern Himalaya.

Within the park lies the Nanda Devi Sanctuary, which is a glacially carved basin surrounded by the peaks of the park. Both the sanctuary and the Nanda Devi National Park are part of the larger Nanda Devi Biosphere Reserve.

The sanctuary, which lies within the park, is divided into two distinct sections, the inner and outer. The walls of the sanctuary are marked by the towering peaks of the Himalaya and the Rishi Ganga Gorge.

The inner section of the park occupies two thirds of the protected region, including the focal point, Nanda Devi. Surrounding the peak lie the two major glaciers, Uttari Rishi Glacier and the Dakshini Rishi Glacier.

The mountains in the Nanda Devi National Park are part of the Garhwal Himalaya, a subrange of the Himalaya. The park is marked by the two major peaks of Nanda Devi (Nanda Devi and Nanda Devi East. These two summits are surrounded by a ring of other rugged peaks.

The park is situated just north of the Main Central Thrust along the Indian and Eurasian plate boundary. The Himalaya, including the peaks in the park, began forming during the Late Cretaceous period when the Eurasian plate and the Indian plate collided, giving rise to the iconic range.

Much of the park’s peaks consist of granite, quartz, kyanite schist, augen gneiss, and garnet mica schist. Lower elevations in the park may also consist of fragments of sandstone.

Waterfalls at Valley of Flower

The Nanda Devi National Park is home to home to a wide array of both flora and fauna. The park contains over 300 species of flowers despite being located at such a high altitude. The outer sanctuary is home to fir, juniper, birch, and rhododendron while the inner sanctuary is quite sparse with flora.

Fauna can be found throughout the park. Large mammals that are common include mainland serow, snow leopard, Himalayan black bear, and Himalayan musk deer. Though some snow leopards do live in the park, a larger population can be found in Gangotri National Park, which lies to the northwest.

Langus and brown bear can occasionally be spotted at lower elevations in the park. Both rhesus macaque and the goral can also be found in nearby protected regions.

The land surrounding Nanda Devi National Park has been inhabited for thousands of years. Remains of rock shelters and ancient rock paintings date back at least 12,000 years while many other more recent archeological remains in the region date back to about 1,500 BCE.

The surrounding mountains were once ruled by the Katyuri dynasty. The difficulty of navigating in this mountainous region often led to a reality where borders were not strictly defined and where it wasn’t clear which dynasty or nation owned the land. However, when India gained its independence, in 1947, the Garhwal Kingdom became known as the state of Uttarakhand.

The first recorded attempt of Europeans visiting the area that is now part of Nanda Devi National Park dates back to 1883. Further attempts of traveling through the region occurred in 1870, 1927, and 1932. The inner sanctuary was explored in 1934 which led to further visitation by mountaineers.

In 1939 the region was designated as a game sanctuary. Finally, in 1982, the Nanda Devi National Park was established. Six years later, in 1988, the park was named a World Heritage Site by UNESCO. The park was further expanded to its current size in 2005.

Nanda Devi was, interestingly enough, once thought to be the world’s highest mountain. However, after new surveying measures were completed, it lost its status as the planet’s highest peak to Dhaulagiri in 1808. Of course, Dhaulagiri, while higher than Nanda Devi, is not the world’s tallest mountain, though it retained this status until 1956, when K2, then Mount Everest were declared the tallest peak in quick succession.

Nevertheless, Nanda Devi has long held the imagination of climbers and mountaineers. Some of the earliest climbing expeditions to the mountain were undertaken by Hugh Ruttledge of Britain in the 1930s. However, the first recorded entrance into the Nanda Devi Sanctuary was completed by Eric Shipton and Harold Tilman, alongside Ang Tharkay of Nepal, in 1934.

In the 1960s, Nanda Devi was also the site of a CIA (Central Intelligence agency) and IB (Intelligence Bureau) attempt to place a nuclear-powered telemetry relay listening device on the mountain’s summit. This joint US-India project was designed to give the countries some advanced warning as to missile test launches in China, though the attempt failed.

The next major mountaineering event on the mountain was completed by Americans Louis Reichardt, John Roskelley, and Jim States, all of whom pioneered a new route up the northwest buttress of the mountain and made a successful summit attempt in 1976.

During this expedition, Willi Unsoeld, who had made the first ascent of the West Ridge of Mount Everest in 1963, was also present. He had brought his adult daughter, Nanda Devi Unsoeld, to the mountain for which she was named, however, she tragically died of illness on the expedition.

These days, the summit of Nanda Devi is actually closed to climbers, as is the Nanda Devi Sanctuary and all peaks within the sanctuary unless advanced permission is gained from the government of India. However, there are a few guided treks that visitors can enjoy on the outside of the sanctuary and climbing is still possible on the peaks located outside of the Sanctuary.

Nanda Devi National Park is home to numerous trails. Here are some of the top hiking areas to visit in the park:

The Lata to Dharasi trek starts on the eastern edge of the park. The route passes through the lower elevations in the Nanda Devi National Park, winding through the dense forest. Here lies some of the most biodiversity of the entire park. This route spans 13 km (8 miles) with 2,250 m (7,382 ft) elevation gain.

There are minimal hikes within the park that visitors can access on their own. Primarily, hiking in Nanda Devi National Park can only be done by guided treks. Local communities lead treks ranging from a few hours to week long adventures.

Guided treks take visitors to the outer and inner reaches of the park. These strenuous routes also allow for visitors to learn about the local communities and rich history of the region.

Many routes lead to the boundaries of the core zone which is a World Heritage Site due to its natural diversity. Summiting Nanda Devi is currently forbidden unless advanced permission is gained from the government of India as it is located within the Nanda Devi Sanctuary (advanced permission is almost never granted). However, it is possible for experienced mountaineers to summit Nanda Devi East from outside the sanctuary.

Looking for a place to stay near Nanda Devi National Park? Here are some of the best cities and villages to check out in the region:

One of the nearest cities to Nanda Devi National Park is Joshimath, also known as Jyotirmath. The city is located at an elevation of 1,875 m (6,150 ft) and it acts as the gateway to trekking in the Indian Himalaya.

The small city has a population of around 17,000 and the area was drastically affected by the 2021 Uttarakhand flood. Besides its close proximity to many mountain adventures, Joshimath is home to tourist attractions such as the Narsingh Temple, Tapovan hot springs, Bhavishya Kedar Temple and the ropeway to Auli.

Located an eight hour drive west of Joshimath lies the city of Dehradun. The city is the most populous city in the state of Uttarakhand and it has a metro population of 1.3 million people.

Because of the city’s large population, it acts as a gateway to the rest of the region through its major airport and connected roadways. Popular tourist destinations of the city include the Forest Research Institute, Tapkeshwar Temple, Malsi Deer Park, Mindrolling Monastery, among others. 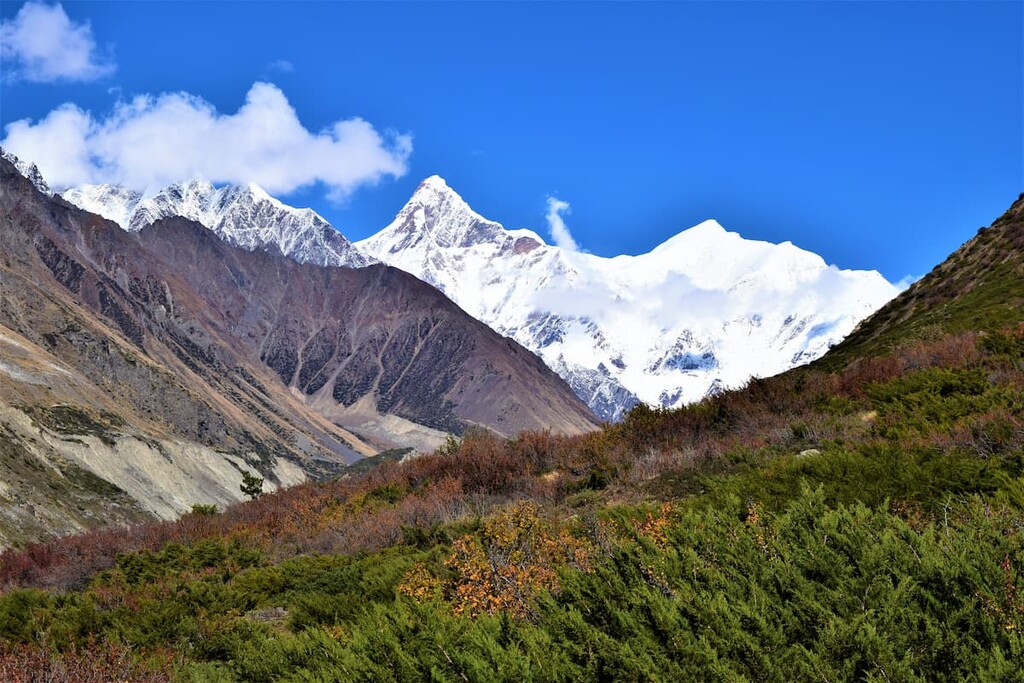 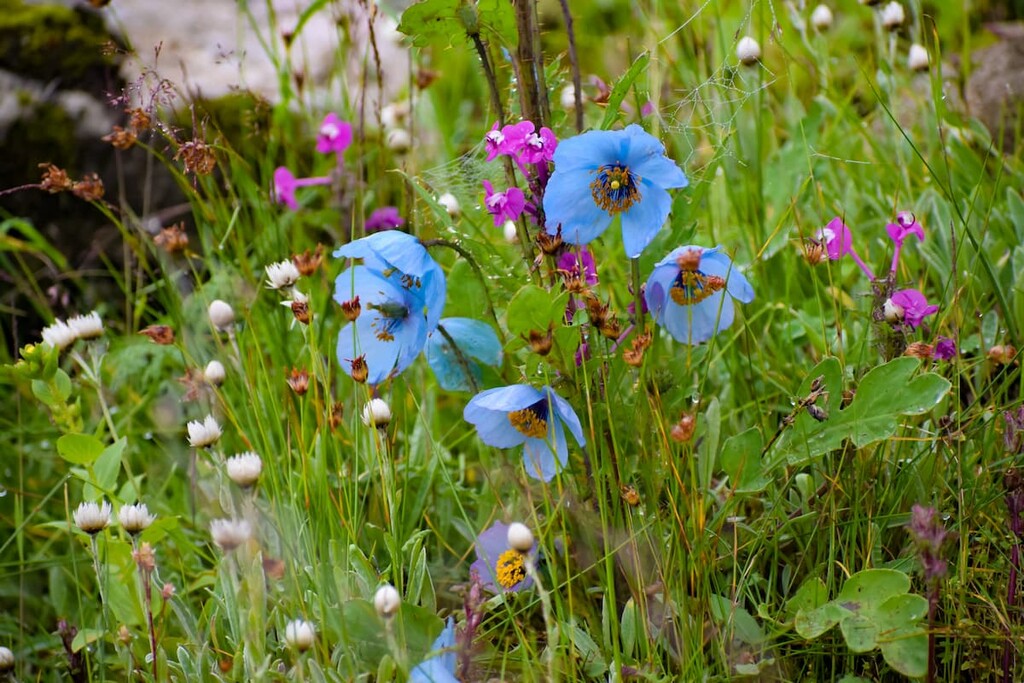 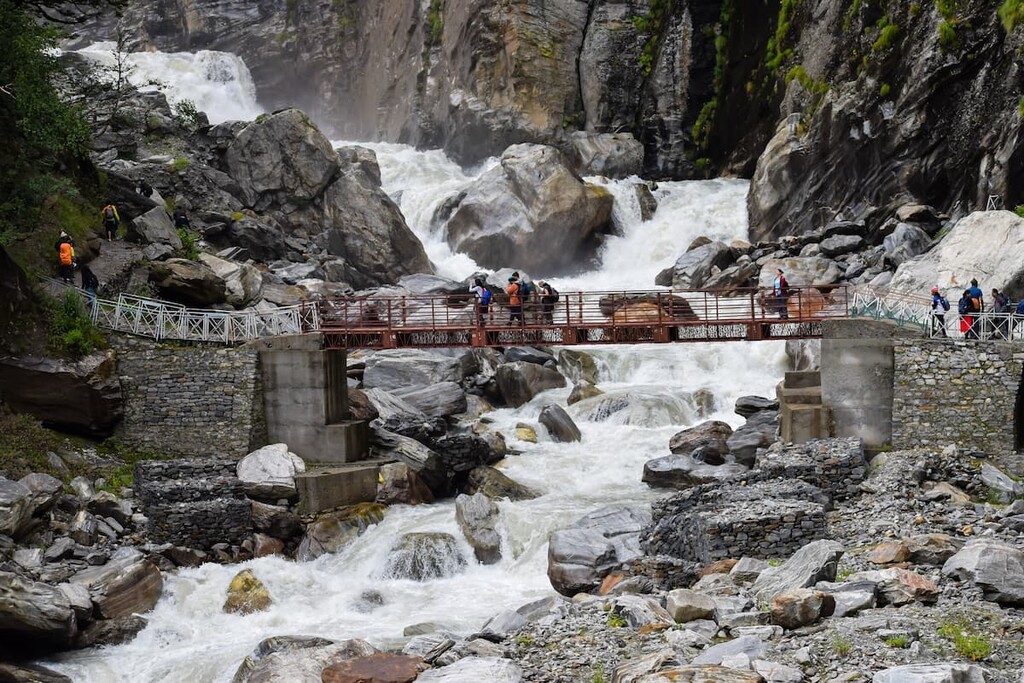 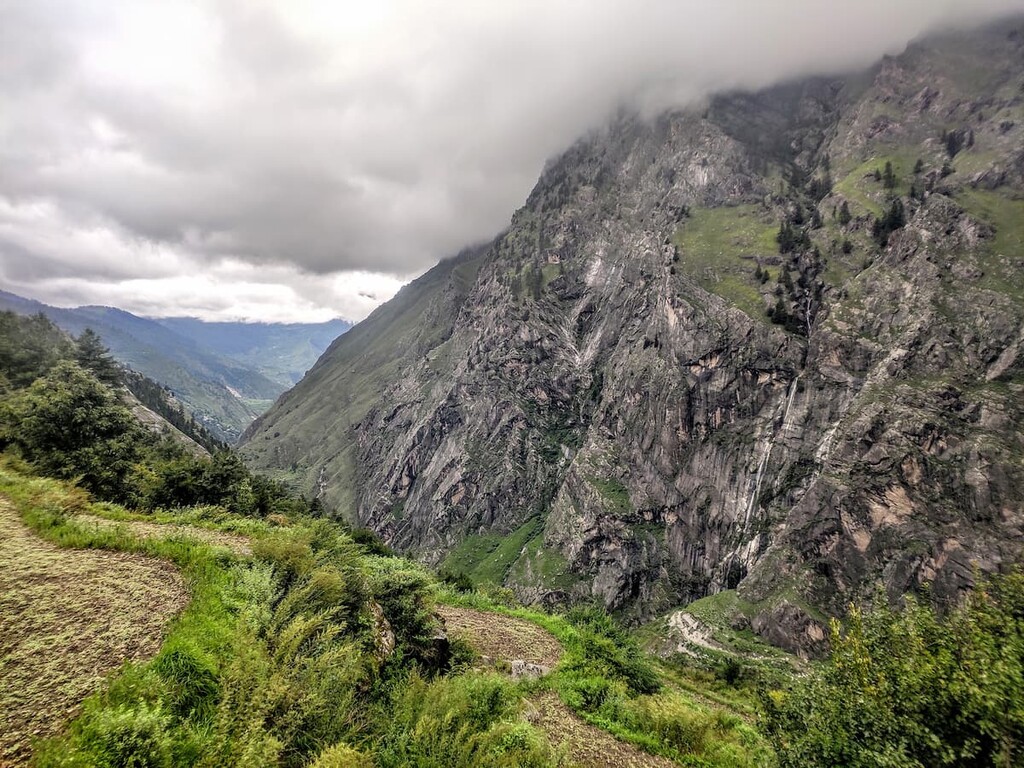 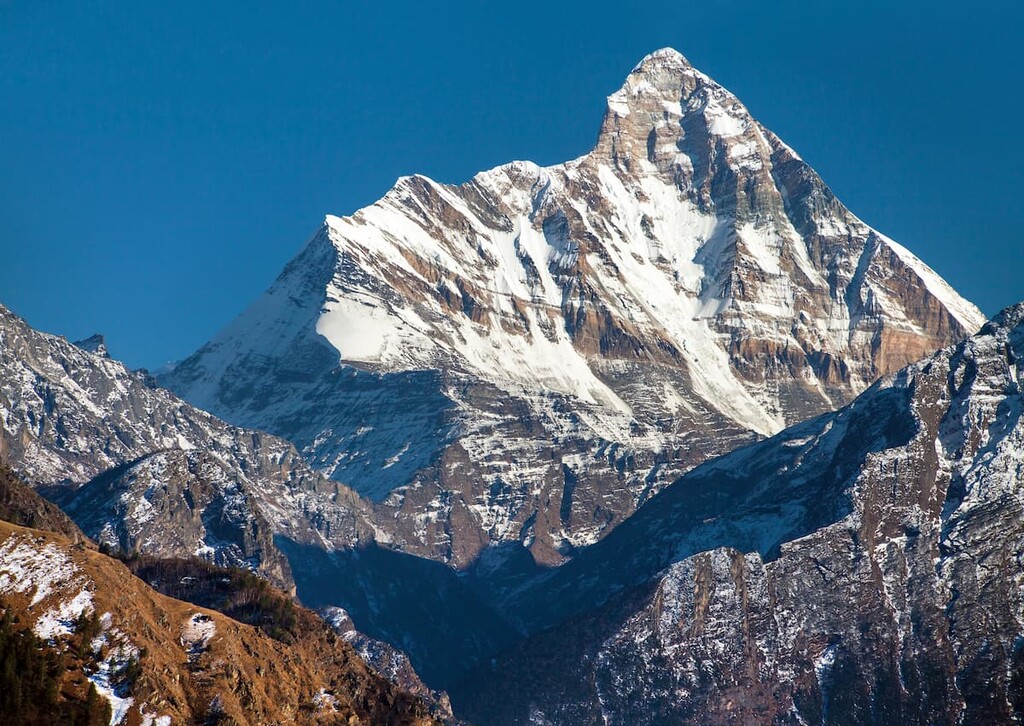 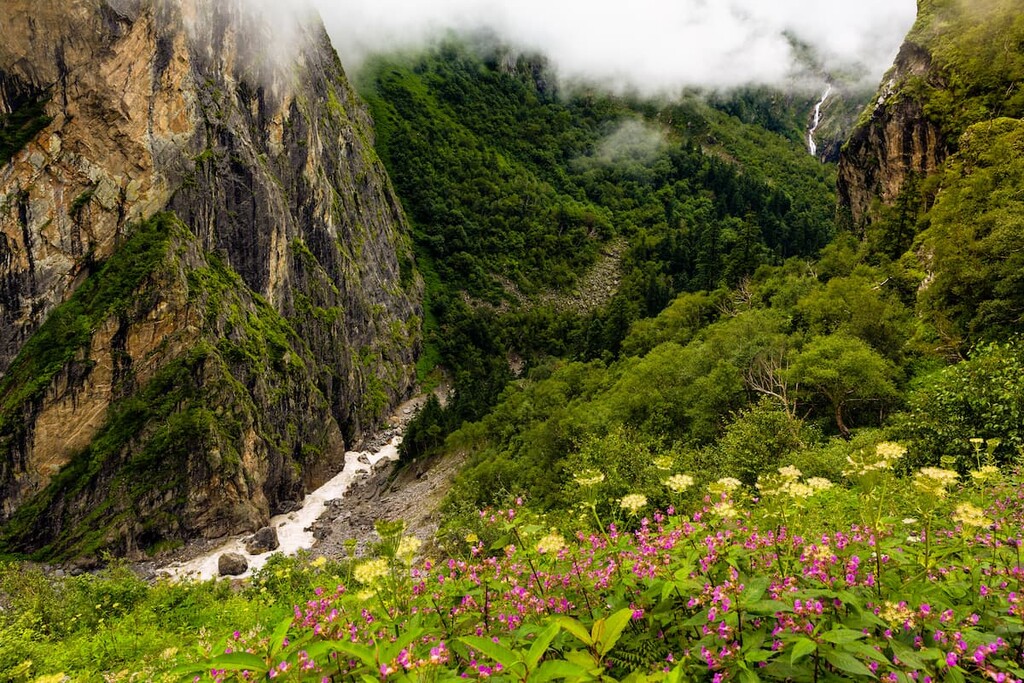