Featuring wide, open spaces and the headwaters of Coyote Creek, Henry W. Coe State Park is a protected area in the northern part of the US state of California. It is home to 26 named peaks, the highest of which is Mount Sizer (3,222ft/982m), and the most prominent of which is Robison Mountain (2,654ft/809m). 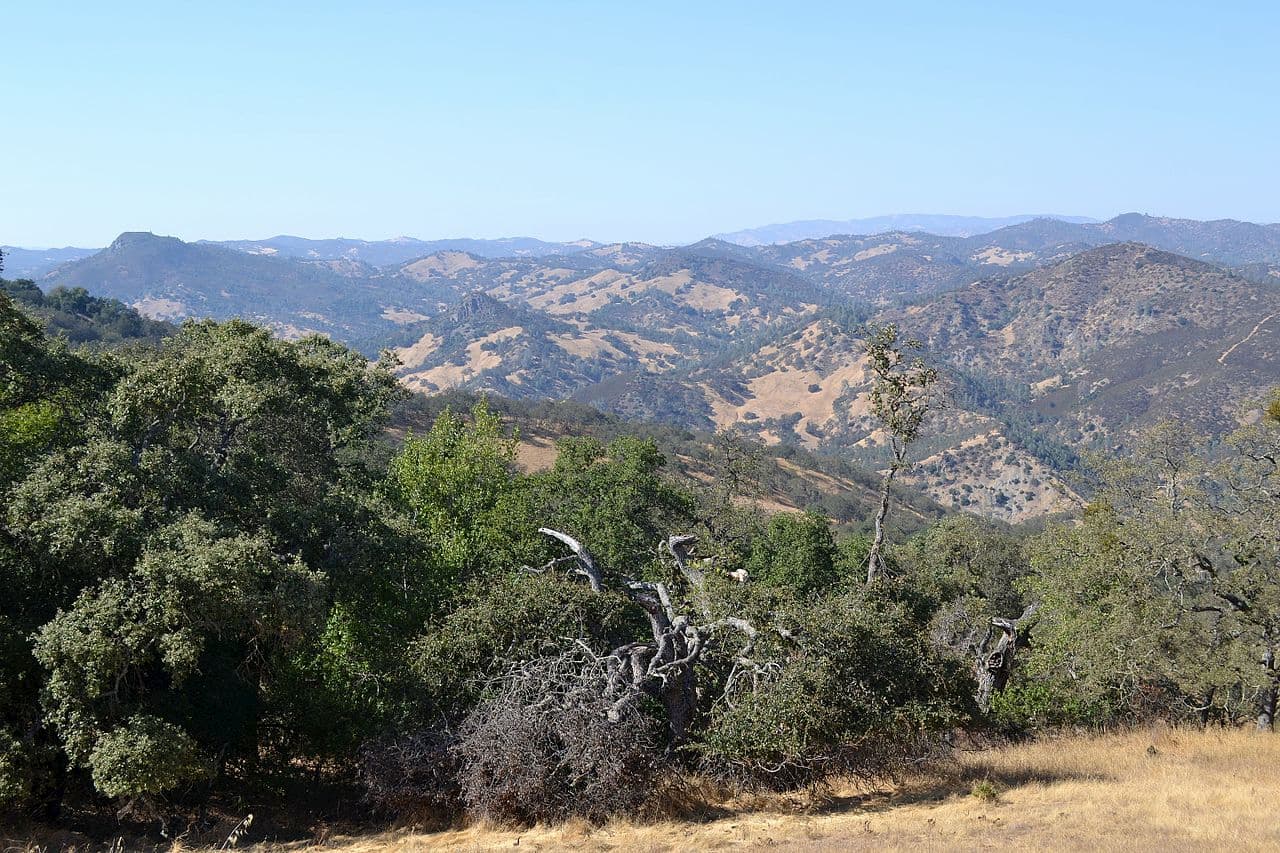 Henry W. Coe State Park (a.k.a. Coe Park), is located in Santa Clara and Stanislaus Counties, just to the south of San Jose and the San Francisco Bay Area. It contains 89,164 acres (36,083 ha) of land, making it the biggest state park in northern California and the second-largest in the state after Anza-Borrego Desert State Park.

The park is situated between the San Antonio Valley to the north and Pacheco Pass to the south. It features a number of notable peaks, including Mount Sizer, Bear Mountain Peak, Robison Mountain, Rooster Comb, Mustang Peak, and Wilson Peak.

Additionally, Coe State Park is separated from the popular Sierra Azul Open Space Preserve and Almaden Quicksilver County Park by Highway 101 to the west. To the east, I-5 separates the park from the San Luis National Wildlife Refuge.

Allie_Caulfield from Germany / CC BY (https://creativecommons.org/licenses/by/2.0)

Moreover, Henry W. Coe State Park includes parts of three of the region’s major watersheds, including those of Orestimba Creek, Pacheco Creek, and Coyote Creek. While all of the tributaries in the park are seasonal, during the winter months, and particularly after heavy rainfall, they can swell to impressive proportions and become impassable for many days.

There are a few natural lakes in the park, though many of the larger bodies of water, including Mississippi Lake, are actually reservoirs created by nearby ranch owners.

The mountains within Coe Park are part of the northern reaches of the Diablo Range, which stretches from the eastern Bay Area all the way to Paso Robles in the Central Coast region. It is also considered a sub-range of the larger California Ranges, which span the majority of southern and central California to the west of the Sierra Nevada.

The Diablo Range formed as a result of crustal movement and uplift along the many transverse faults in the region. A significant portion of the range is comprised of the Franciscan Complex, which is mostly sandstones and shales with some interspersed igneous rocks and chert in the mix.

Other commonly found rock types in Coe Park include blueschist, greenstone, and serpentine, the latter of which is known to sustain rare plants due to its unique mineral composition.

Coe State Park is well-known for being home to a robust diversity of flora and fauna. It features mostly California interior chaparral and woodlands ecoregions, which are dominated by blue oak, valley oak, coast live oak, canyon live oak, and interior live oak.

The park is also a great habitat for an abundance of wildlife. Some of the larger mammals found in the region include mountain lions, bobcats, wild boars, coyotes, tule elk, and black-tailed deer.

There are also hundreds of bird species found within the park, including the red-tailed hawk, bald eagle, turkey vulture, and the golden eagle. The California condor is occasionally spotted in the park, generally having flown in from Pinnacles National Park to the south, however, they used to be more widespread.

The Ohlone people and their ancestors, among countless others, have lived in the region that is now Coe Park for thousands of years. Many of the original inhabitants of the land lived off of the land’s abundant big game as well as the plethora of edible acorns from the area’s widespread tree cover.

Upon the arrival of Spanish missionaries and the creation of the missions in the 1770s, most of the indigenous people of the region were forced into baptisms and working at these missions. They were forcibly pushed off of their land and often succumbed to violence, introduced diseases, or injuries as a result of their forced labor.

By the late 1840s, the California Gold Rush was in full swing, bringing thousands of migrants from around the US, though little gold was found in the region. While the area in and around Coe Park wasn’t rich in gold, there were some sizable deposits of quicksilver (a.k.a. mercury), which was mined heavily as it’s used to extract gold from its ore. Some two decades later, the start of the Civil War precipitated a demand for copper, which was mined on the southern slopes of Burra Burra East Peak.

After the war, homesteaders started to flock to the area in search of land. However, most of the homesteaders found that the 160 acres that there were given in exchange for working the land weren’t enough to earn a living, so they sold these claims to ranchers, such as Henry W. Coe, who consolidated these parcels into massive cattle ranches.

Coe died in 1943 and bequeathed the ranch to his son, who swiftly sold it to the Beach Land and Cattle Company of Fresno County. However, Henry Coe’s daughter, Sada, repurchased the ranch in the early 1950s and then later donated it to the state of California in 1953. She loved the ranch and wanted the residents of nearby cities to be able to enjoy outdoor spaces in the region.

The park was officially established in 1959, though it has grown substantially in the years since its designation. Many other nearby ranches have been added to the park in order to preserve more land from further development.

However, despite the park’s status as the second-largest in the state’s park system, it was at threat for closure twice in the last two decades. In May 2009, then-Governor Arnold Schwarzenegger proposed that 220 parks in the state, including Coe, be closed for at least 2 years to deal with California’s budget crisis. Thankfully, the parks were not closed and cost savings were found through other means.

Additionally, Coe was one of 70 parks proposed as candidates for closure in 2012 as a response to the state’s budget deficit. Local park advocates in the region created the Coe Park Preservation Fund and raised the money necessary to keep the park staffed for three years to avoid closure.

Today, the park remains a major center for outdoor recreation in the area, even though it has relatively few developed facilities.

Coe State Park has over 200 miles (320km) of trails and dirt roads for hikers to enjoy. It is large enough that one could hike for two weeks without covering the same trail twice. There are also ample fishing opportunities within the park.

Are some of the best places to check out:

The 4.5 mile (7.2km) Frog Lake Loop is a casual walk through some of the wooded areas in Coe State Park. Starting at Manzanita Point Road, the trail heads downhill for a while until arriving at Frog Lake. The trail also offers some decent side trip options to a monument that Sada Coe put up to honor her father. There are also some nice picnic tables near the monument, which make for a good spot to enjoy lunch.

The trail to China Hoe is a 10 mile (16km) roundtrip jaunt that’s considered to be moderately strenuous. It features a number of different swimming holes and a sandy beach, which makes for a good place to enjoy lunch and relax in the sun.

In fact, the swimming hole used to be part of the Madrone Soda Springs Resort, which was a popular tourist destination in the late 1800s and early 1900s. Nowadays, there is no resort, but China Hole makes for a good place to cool off on a hot summer’s day.

Middle Ridge Loop is a 6.4 mile (10.3km) long hike up to the top of Middle Ridge, where you can visit the Coe Monument. Other highlights of this trail include plenty of shade under the area’s huge Manzanita shrubs and its great views. Of course, those views require a bit of strenuous hiking, but they’re worth it in the end.

Here are some of the best places to stay before your trip to Coe State Park:

San Jose is situated north of the park at the southern edge of the San Francisco Bay Area. The city is home to over 1 million residents and is considered the cultural and economic capital of Silicon Valley.

As the third-largest city in California and the tenth-largest in the country, San Jose offers excellent road, train, and air connections to destinations around the country and the world.

Santa Cruz is a popular resort town located in the northern part of Monterey Bay, to the west of Coe State Park. It has a population of over 64,000 people and is home to the University of California, Santa Cruz. The city is easy to get to by road on State Routes 1 and 17. Amtrak also provides rail service to destinations around the state via the city’s train station.

The city of Gilroy is located just to the southwest of Coe State Park at the foothills of the Diablo Range and the neighboring Santa Cruz Range. It is home to over 48,000 people and is known for its plethora of garlic farms and its annual Gilroy Garlic Festival. Additionally, Gilroy is known for producing boutique wines.

Although Gilroy does not have an airport, it is located along US Route 101 and State Route 152. It is also connected to San Jose by the Santa Clara Valley Transportation Authority bus system and is along the Amtrak Capitol Corridor line. 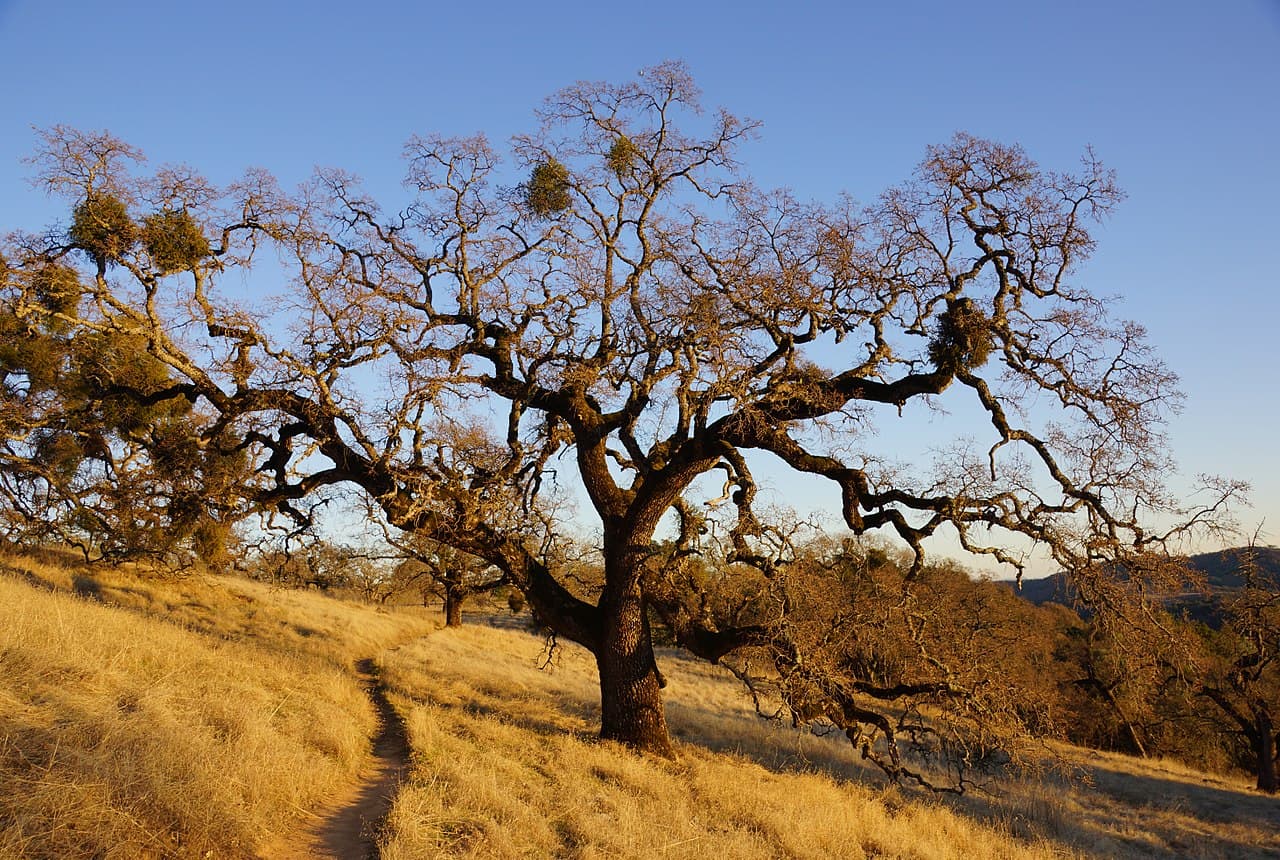 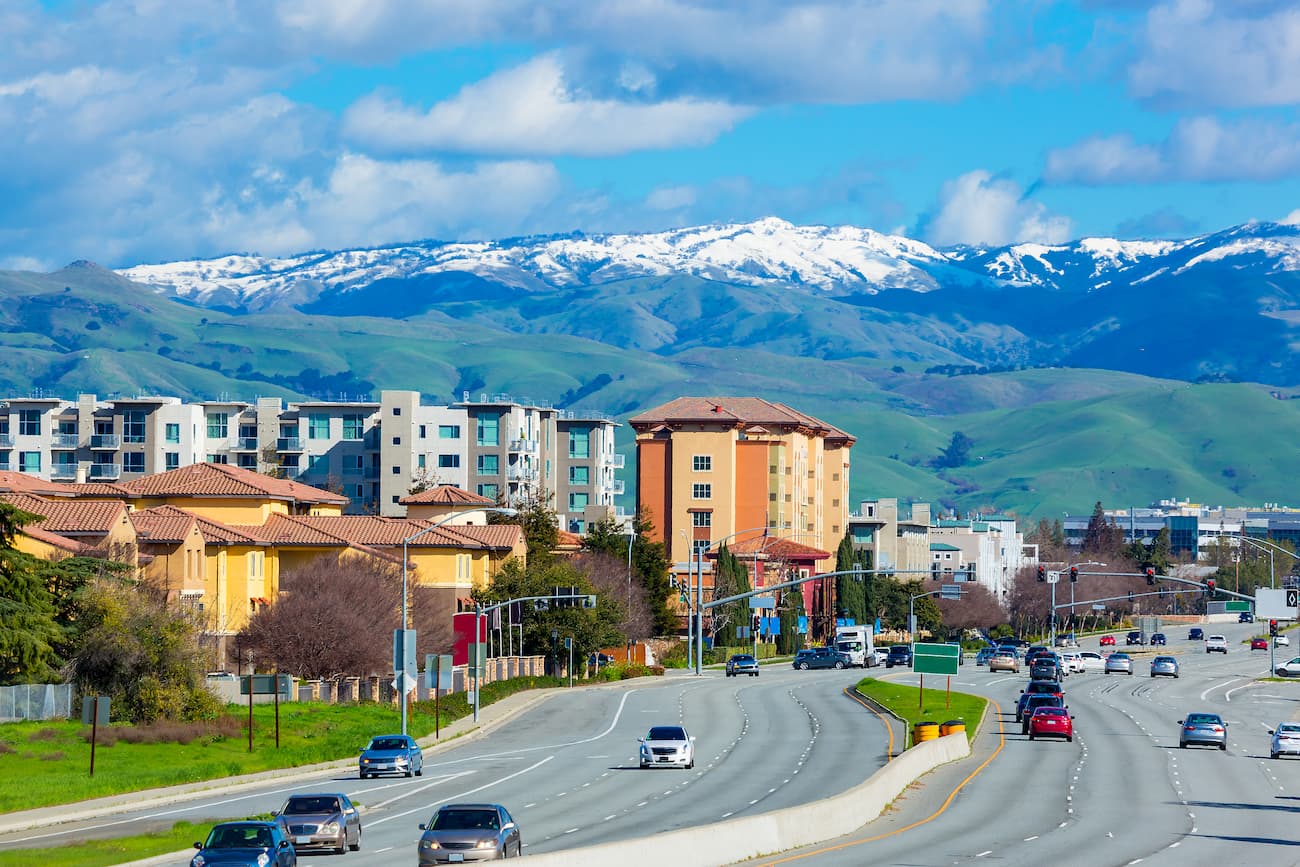 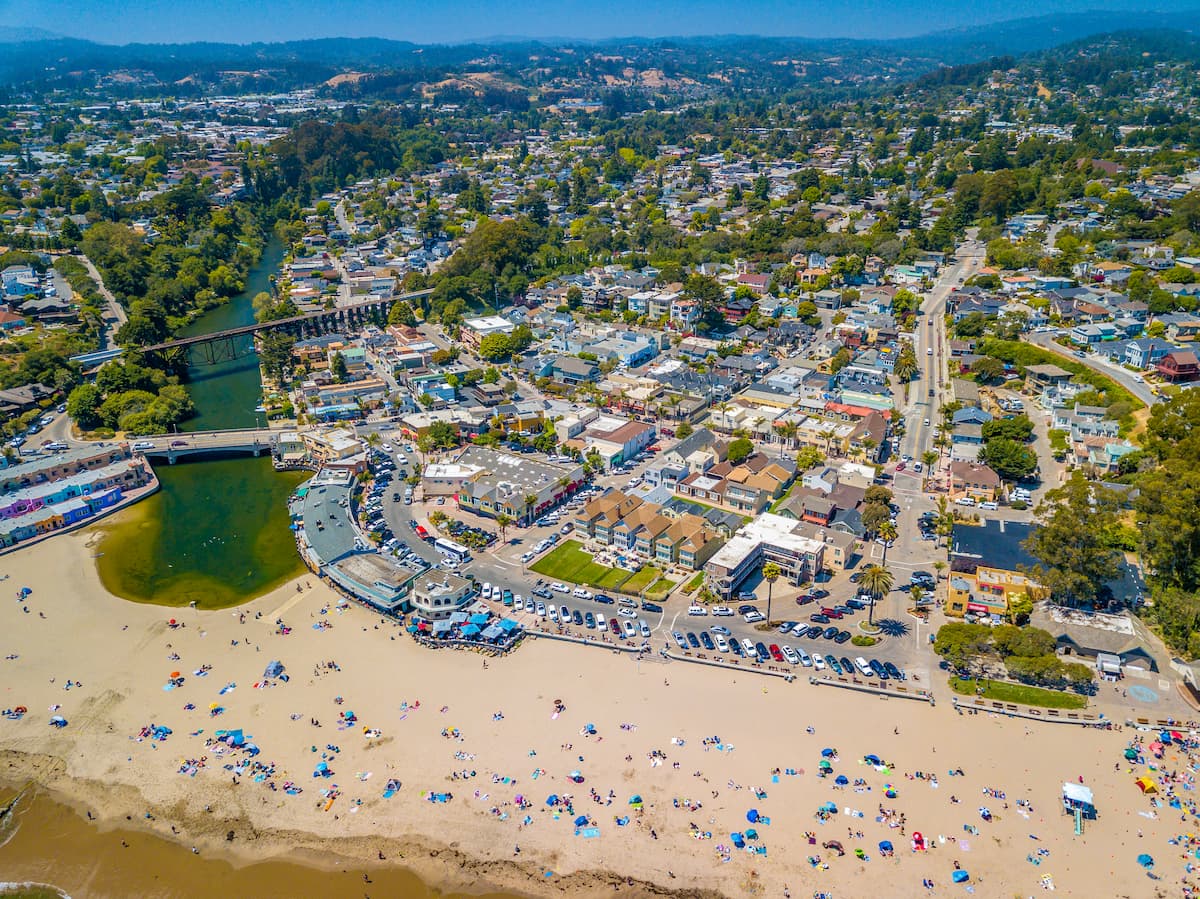 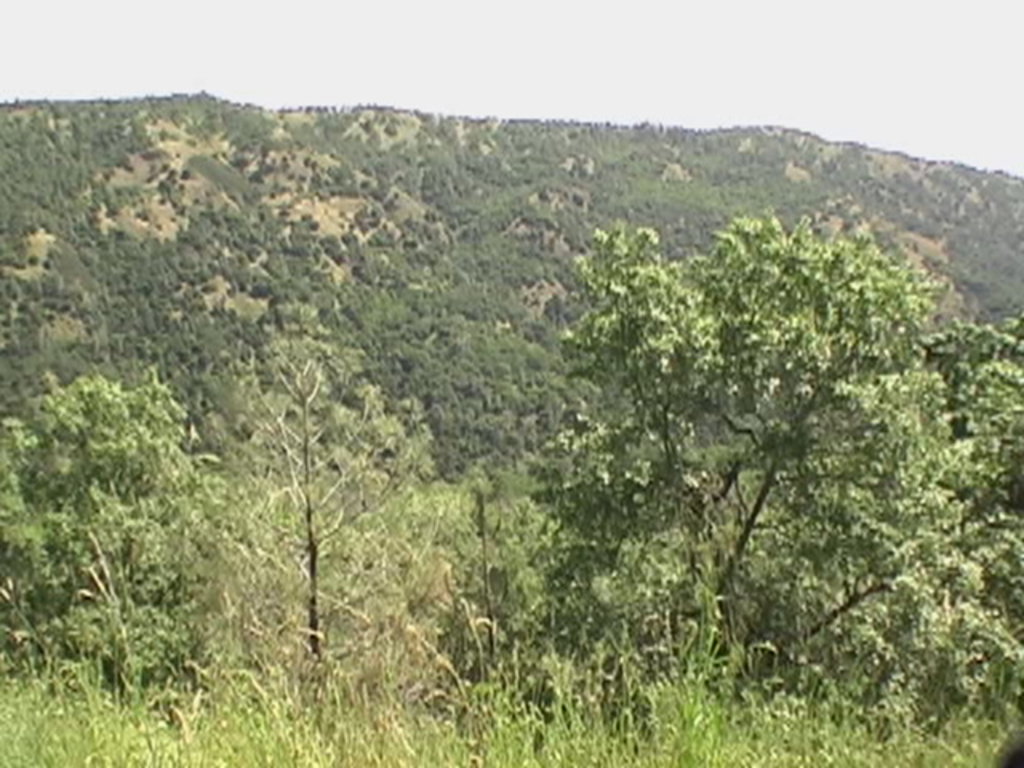