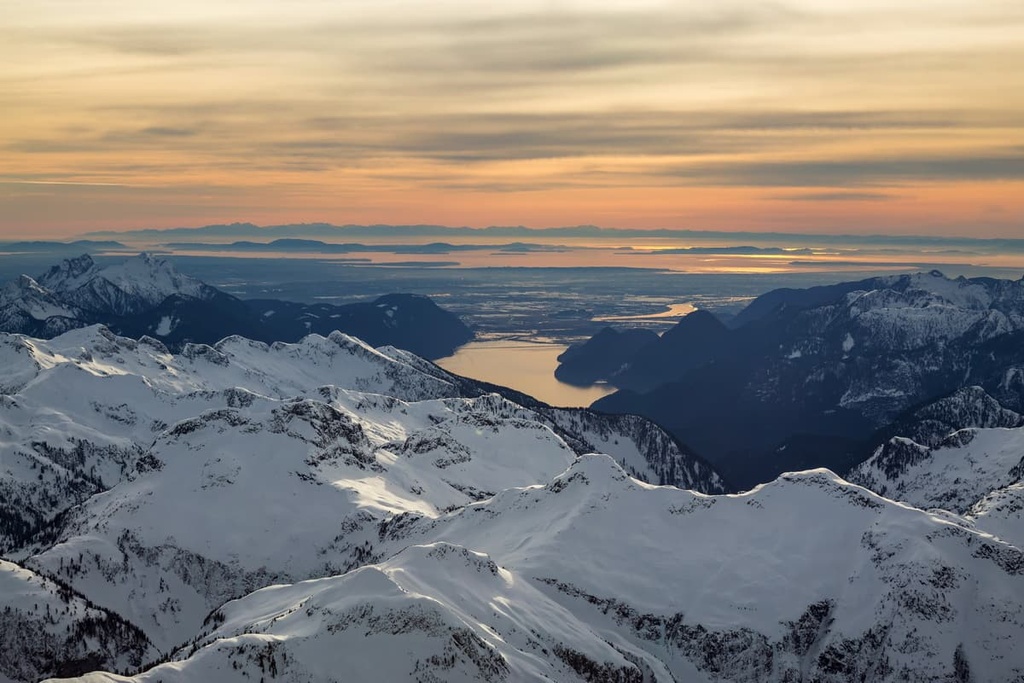 The park is located in the Strathcona Regional District, which includes parts of the rugged coast of mainland British Columbia and a section of central Vancouver Island.

Access to the park is primarily by helicopter or by boat up Bute Inlet to Waddington Harbour. While not directly accessible by road, there is a forest service road from Waddington Harbour that follows Bishop River to within a few miles of Bishop River Provincial Park. There are no official roads or trails in the park.

As part of the Pacific Range of the Canadian Coast Mountains, the mountains of Bishop River Provincial Park primarily consist of volcanic and sedimentary rocks that are of Jurassic age and older.

The sedimentary layers in the region were created by the deposition of marine sediments in a shallow sea that once covered much of what is now southernBritish Columbia. However, some of these layers are the result of eroded sediment from a previous continental margin that was washed into the sea.

The compressive force of the continental collision with the tectonic plates increased the pressure on the Earth’s crust, which raised its temperature, making it more malleable. The crust along the continental margin folded and buckled to create the mountain ranges of the Western Cordillera, which includes the Rocky Mountains, Columbia Mountains, Interior Ranges, Coast Mountains, and the Insular Mountains.

After the mountains formed, they were consistently battered by the erosive forces of wind and water. During the Pleistocene, the formation and movement of the massive continental ice sheets and glaciers created the topography of the Coast Mountains and Bishop River Provincial Park that we see today.

The glaciers that feed the Bishop River are the remnants of the massive ice sheet that once scoured the mountains, rounding off the summits of the region’s lowest peaks and carving out valleys. Of the two peaks in Bishop River Provincial Park, Clao Peak was below the ice sheet and was therefore rounded over at the summit.

However, Compton Mountain’s peak was a nunatak, which stood above the ice sheet during the Pleistocene. These nunataks avoided the erosive forces of the ice sheet, but they were often subjected to cirque and alpine glaciers. While the peak of Compton Mountain avoided the massive erosion that rounded off the region’s lowest peaks, cirque glaciers carved out a bowl in the peak’s northeast face.

The headwaters of the Bishop River are in a unique ecological area that splits apart the wet coastal climate and the dryer climate of the interior. Most of Bishop River Provincial Park is located in the Coastal Mountain-heather Alpine zone while the subalpine areas are either part of the Coastal Western Hemlock or the Engelmann Spruce-Subalpine Fir zones.

The alpine areas in the region feature barren rock at the highest elevations. They may also be covered by a glacier or semi-permanent snowpack. There are several species of birds who nest in the alpine areas, such as the white-tailed ptarmigan or the American pipit. Additionally, mountain goats are inhabitants of the alpine rocks of Bishop River Provincial Park.

The park was designated in the year 2000 in order to preserve wildlife habitats for species that require large, undisturbed, remote habitat with little human presence to thrive. The park is primarily home to mountain goats, bears, and wolverines; however, other species pass through, such as mule deer, elk, and caribou.

However, there are no known archaeological sites in the park. The remote alpine nature of the park has prevented any significant archaeological investigation into the region.

However, adjacent to Bishop River Provincial Park is Ts’ilʔos Provincial Park. The area that is now part of Ts’ilʔos was traditionally used for hunting, trapping, and gathering for food and medicine. It is possible that early inhabitants also made their way to the headwaters of the Bishop River, in search of rich hunting grounds, trade and travel routes, or rocks such as chert and obsidian for tools, weapons, and for trade.

The park has remained a pristine wilderness area that has remained untouched by industry and commerce. There are no roads or official trails in the park though the park is occasionally used for subsistence hunting. That said, the rest of visitors to the park are welcome to go hiking, camping, or mountaineering.

The main attraction of Bishop River Provincial Park is the pristine wilderness which has remained relatively untouched since the ice melted from the park about 10,000 years ago. Indeed, the park is a prime grizzly bear habitat. Mountain goats and wolverines are the other major mammals which inhabit the park.

Some visitors may enjoy the mountaineering challenges of Compton Mountain and Clao Peak. Others may wish to travel beyond the borders of the park and travel upon one of the many surrounding glaciers that feed into Bishop River, such as the Bishop, Lillooet, Ring, or Magaera Glacier.

However, anyone venturing into the park needs to be prepared for substantial off-trail travel and navigation. As there are no designated trails in Bishop River Provincial Park, all visitors to the region should be experienced outdoor recreationalists with the right equipment to be self-sufficient for the duration of their trip.

While the peaks of the Coast Mountains are easy to photograph, they are typically very difficult to access. The following are some of the cities, towns, and lodges that can serve as a good starting point for your journey into the remote wilderness of the Pacific Ranges and Bishop River Provincial Park:

Located on the north side of the Bute Inlet, the Bute Inlet Lodge is likely the closest accommodation to Bishop River Provincial Park. The lodge is a short boat ride from the terminus of the logging road that leads from Waddington Harbour along the Bishop River to the border of the park.

Activities at the lodge include gourmet dining, fishing in the inlet or the inland rivers, and wildlife viewing. At the lodge, there’s the potential to see black and grizzly bears, dolphins, mountain goats, elk, wolves, sea lions, and many different birds.

Additionally, the lodge offers helicopter experiences directly from the lawn of the lodge. A helicopter can take you to explore and fish the remote lakes and rivers, to hike the wide-open ridges, or to drop you off for a day of ski touring or heli-skiing.

Campbell River is home to an incredible stretch of beaches, where you can sit on beautiful volcanic outcrops, cobble rocks, or soft sand. There are stunning views into the Georgia Strait toward the Pacific Ranges on the mainland as well as toward Quadra Island, Cortes Island, and many of the other islands that make up the Discovery Islands.

In addition to being a gateway to the north end of the island, Campbell River is also home to the ferry terminal that gives access to the beautiful Discovery Islands. The islands are home to incredible wilderness parks, such as Ha’thayim Marine Provincial Park on Cortes Island and Maine Lake Provincial Park on Quadra Island.