With its name translating to “The Region of the Lakes,” it is no surprise that the Chilean region of Los Lagos boasts a superb amount of natural beauty and biodiversity, from the mountains of the Andes to the extraordinary marine environments of Chiloé.

Notably, there are 497 named peaks in the region, dispersed throughout the Andes, archipelagoes, and everything in between. Volcanoes are particularly prominent, such as Tronador, which is also the tallest and most prominent peak of the region at 3,429m/11,250ft above sea level and an impressive prominence of 2,599m/8,526ft. 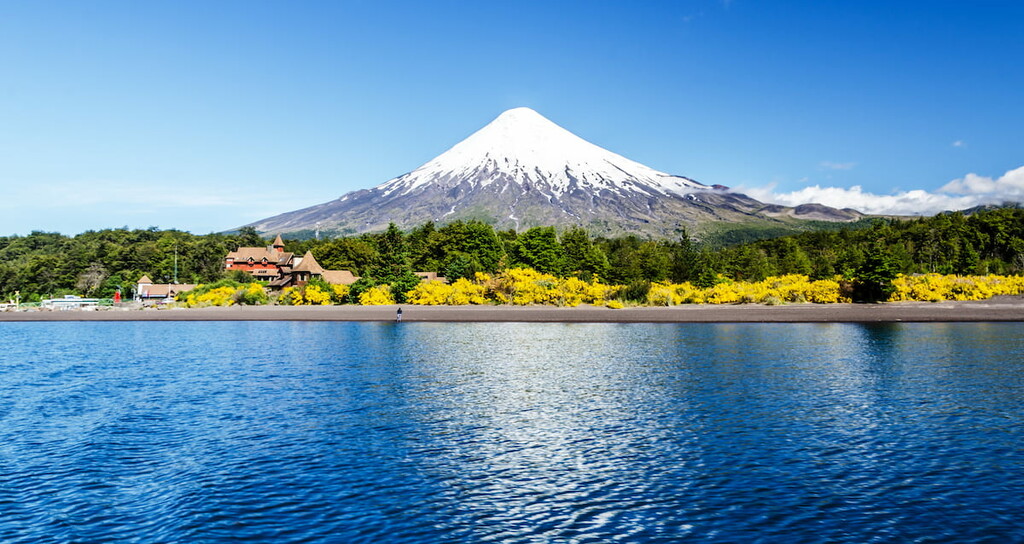 Los Lagos is located in southern Chile, south of the Los Ríos Region, north of Aysén, and bordering Argentina to the east, specifically the provinces of Neuquén, Río Negro, and Chubut from north to south.

The region is divided into four provinces of Chiloé, Llanquihue, Osorno, and Palena, with its capital city, Puerto Montt, located in the province of Llanquihue.

Chiloé comprises the namesake Chiloé archipelago, including the island of Chiloé, the second largest island in all of Chile. The province covers the southwestern part of Los Lagos, with the province of Palena across the gulfs of Ancud and Corcovado that separate Chiloé from the Chilean mainland.

The gulf of Ancud, just north of Corcovado, is also where Puerto Montt lies, as well as much of southern Llanquihue. Ancud is fed through the Reloncaví Estuary by the Petrohué River, one of the major rivers in the region alongside the Maullín River in the west, the Pescado River, and the Llico, and many more.

View of Puerto Octay at the shores of Lake Llanquihue, with Osorno Volcano and Puntiagudo Volcano in the back, X Region de Los Lagos, Chile

Osorno is the northernmost province, and the location of the Cardenal Antonio Samoré Pass, a major Andean mountain pass between Chile and Argentina. The Andes, of course, heavily impact Los Lagos, with many mountains and volcanoes to be found in the western portion of the region. Stratovolcanoes like Tronador, Osorno, and Puntiagudo are some of the most imposing figures of the landscape.

Instead of the Andes, the island of Chiloé has the mountain ranges of Piuchén in the north and the Pirulil in the south, both of which are extensions of the Chilean Coast Range that can also be found on the western coast of mainland Los Lagos.

Generally, the climate is temperate, with drier summers and cold, wet winters, although in the south, the region sees more precipitation year-round.

View of Puerto Octay at the shores of Lake Llanquihue, with Houses standing on small columns, Chiloe Island, Patagonia, Chile

The mountains, volcanoes, and archipelagoes of Los Lagos present an interesting mosaic of geological features. One of the main foundations underlying the region, particularly around the Chilean Coast Range parts, is the Bahía Mansa Metamorphic Complex, a complex formed between the Carboniferous and Triassic, made mostly of various schists, slate, and greywackes.

Protruding through much of the Andes are the igneous plutons of the North Patagonian Batholith, consisting of granodiorite, diorite, tonalite, and other similar rocks. Also notably, the region lies upon the Liquiñe-Ofqui Fault line, contributing to the development of many of its Andean volcanoes.

Tronador, the tallest and perhaps most significant peak of Los Lagos, is an extinct stratovolcano made largely out of basalts. Glaciation has also resulted in several glaciers over much of its flanks. These characteristics are common among many of the major peaks in the region, particularly the basaltic or andesitic composition and past or present blanketing of glaciers over its slopes.

Volcanoes Tronador and Puntiagudo in the background. Antillanca, Osorno, Chile

There are many geological formations speckling the landscape of Los Lagos. These formations are mostly of a sedimentary nature and often date back to the Miocene, containing many (typically marine) fossils and rocks like sandstone, siltstone, mudstone, and conglomerate, and occasional others like black shale, tuff, and coal. Examples include the Ayacara, Vargas, Santo Domingo, La Cascada, and Laqui formations, among others.

Most of the wilderness in Los Lagos is part of the Valdivian temperate rain forest. The fitzroya or alerce tree is particularly omnipresent, especially in national parks like Hornopirén, Pumalín, and Alerce Andino, where they may comprise almost the entire forest.

Otherwise, the forests of Los Lagos may consist of other typical and often evergreen Valdivian trees like the lenga, coigüe, cypress, ulmo, temu, and tineo, while particularly wet or humid areas may see populations of Winter’s bark. Some prominent non-tree plants include the Chilean rhubarb and Spanish broom.

Mammals found in various parts of the Valdivian forest include the pudu, colocolo opossum, cougar, güiña, lesser grison, south Andean deer, chilla fox, coypu, and American mink, alongside many other endemic rodents. There are also notable invasive species, like the European red deer and wild boar.

Secluded Beach on the Pacific Coast of the Chiloe Island

Chiloé Island presents a mixture of forests, pastures, swamps, and mountains. Much of the vegetation, like the mainland, is of Valdivian forest, mainly consisting of evergreen southern beech, alerce, and other conifers. Other significant vegetation include Chilean myrtle, olvillo, tepu, and larch.

On the land, mammals like the pudu, Darwin fox, and southern river otter can be found, as well as many birds. Its marine life, however, is of particular importance, with blue and sei whales, Chilean and Peale’s dolphins, Humboldt and Magellanic penguins, and sea lions all part of its rich and vast marine biodiversity.

The original inhabitants of the region were of various indigenous communities, namely the Huilliche in the north and Chono in the south, though both settled in the Chiloé archipelago for quite some time.

The arrival of the Spanish in the 1500s marked a significant change in the history of Los Lagos, especially the expedition of Pedro de Valdivia into southern Chile, opening the floodgates for further Spanish expansion.

Over the next few centuries, there would be much conflict between the Huilliche and the Spanish, climaxing in the Huilliche Uprising of 1792, which resulted in total devastation against the Huilliche. The Chonos faced similar hardships, including rebellions and enslavement at the hands of the Spanish.

Moon rising on Puerto Varas at the shores of Lake Llanquihue with Osorno Volcano in the back, X Region de Los Lagos, Chile

But while the independent Chono culture seems to have disappeared from the historical record, the Huilliche live on, and today make up sizable populations in the region, especially on the island of Chiloé. After Chile’s independence came an influx of German immigrants, creating numerous German communities, particularly agricultural ones, throughout Los Lagos.

The Los Lagos Region is home to a seemingly endless number of parks, reserves, and monuments viable for hiking and exploring.

The oldest national park in Chile, Vicente Pérez Rosales offers amazing opportunities to see and climb features like the Osorno Volcano, Petrohué waterfalls, and many more. The diversity and beauty of its landscape have also made it one of the most popular parks in Chile, highlighted by the always looming peak of Tronador.

Notable trails and locations include:

The trails of Alerce Andino National Park are optimal for witnessing the Reloncaví Estuary and pristine lakes that surround it. The estuary, rivers, waterfalls, and about 50 lakes and ponds provide an endless amount of beautiful natural scenery, prime to be explored by the park’s major trails.

Chiloé National Park is the premiere location on the island of Chiloé, representing a crossroads of natural, cultural, and archaeological significance. Endemic land species and amazing marine life, alongside the presence of Huilliche communities and landmarks epitomizing the rich indigenous history of the area, offer many reasons to hike the trails of Chiloé.

There are a plethora of trails that wind through this massive park, flanked by lush forest, scrubby sand dunes, and sights of the Chiloé coast. Trails range in difficulty and length from one-hour trips to day-long expeditions.

As one of the largest parks in all of South America, Pumalín offers endless acres of well preserved biodiversity, glaciers, Valdivian rainforest, towering Andes peaks, and intimidating volcanoes.

Centered around the volcano grouping of Puyehue and Cordón Caulle, Puyehue National Park hosts numerous unique attractions that have made it a popular destination in Los Lagos. From hot springs and thermal baths to volcanic landscapes to waterfalls to strawberry fields, there are any number of sights to see and experiences to have along its many trails.

The trails of the park, ranging from short interpretative and recreational trails to far longer excursions, concare all concentrated around three main areas:

Outside of the major national parks, there are plenty of other options for exploring, includingL

Volcano of Hornopirén and green meadow with river. Chile

Throughout the Los Lagos Region contains a few larger cities and plenty of smaller but nonetheless vibrant urban centers, providing places to reside in and explore near all of the region’s major destinations.

The capital of Los Lagos and its largest city at around 250,000 people, Puerto Montt shines in its rich coastal culture, experienced through seafood markets like Angelmó, and unique, distinctly Chiloé-inspired architecture.

Its unique architecture can be seen in buildings like the wooden neoclassical cathedral at the Plaza de Armas, as well as the Casa del Arte Diego Rivera, the History Museum, and the Pauly House. Its prime location near the water and near many significant locations like Lake Llanquihue, Llanquihue National Reserve, and Alerce Andino National Park has resulted in solid tourism infrastructure and plenty of options for lodging.

The main airport of Puerto Montt is El Tepual, with regular flights to and from major Chilean urban centers, which the city is also connected to through the highways and its bus terminal.

The second largest city in Los Lagos is Osorno, where the influences of Huilliche, Spanish, and German immigrant communities meld together, as well as a vast agricultural history and impact. These various influences can be seen from the architecture of the city to the many festivals and celebrations it hosts.

Some of the most notable features of Osorno include the fountains, trees, and liveliness of streets like Juan Mackenna Avenue and the Plaza de Armas; the eclectic campus of the Universidad de Los Lagos; and the modern gothicism of St. Matthew’s Cathedral.

Osorno’s importance can also be attributed to its relative proximity to many major destinations of Los Lagos, such as the Antillanca ski resort and many parks and reserves. The city can be accessed by use of bus terminals that run along Chile’s highway system, including to and from Santiago, and its main airport is Canal Bajo Carlos Hott Siebert, which likewise has regular flights to and from the capital. 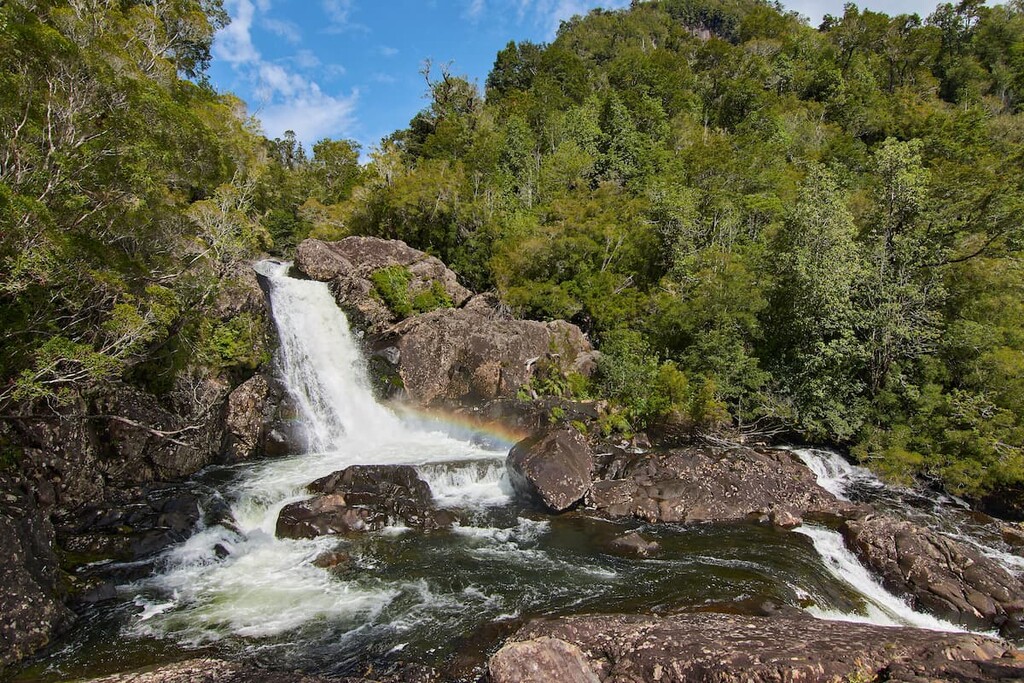 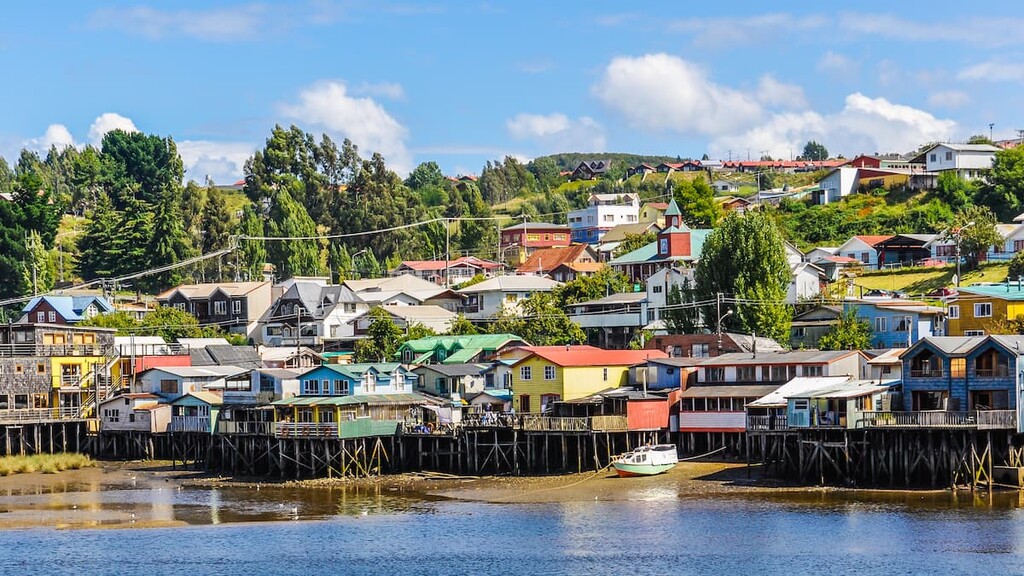 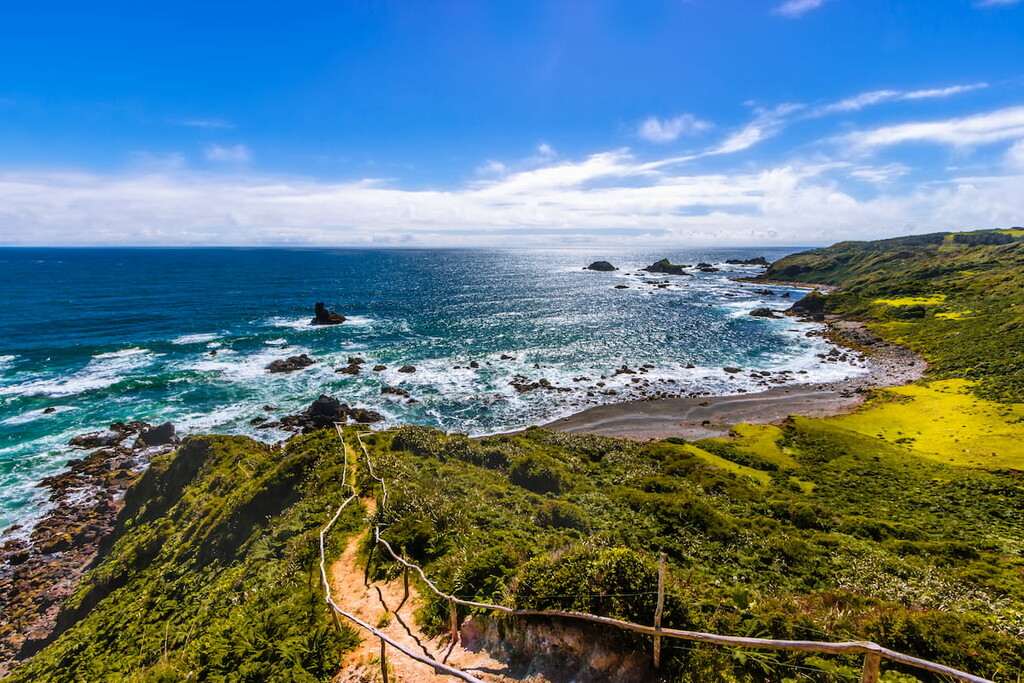 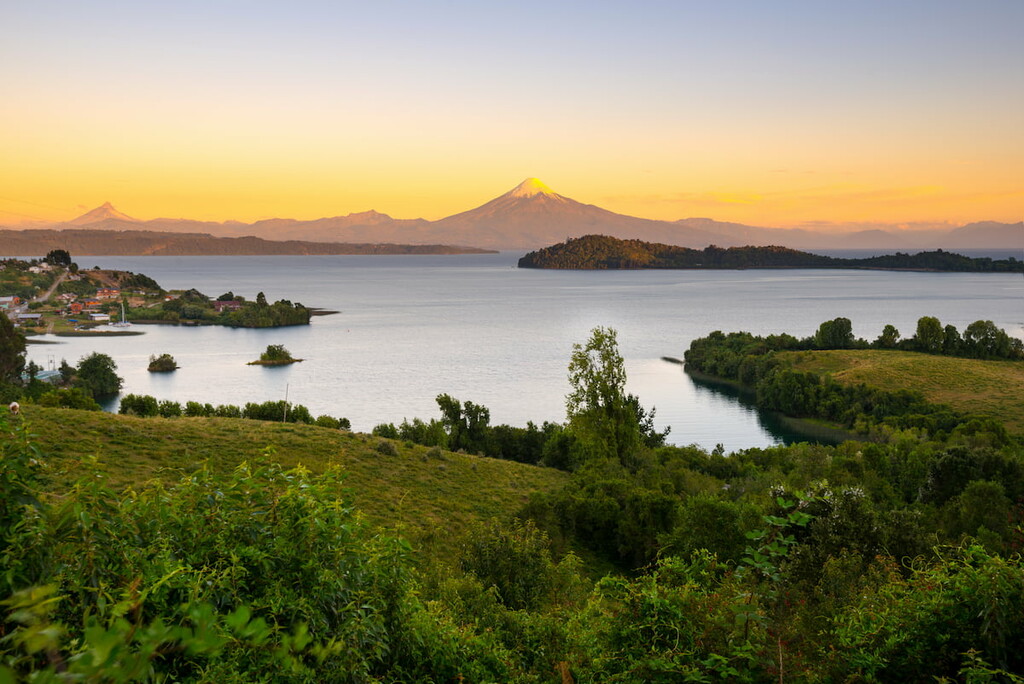 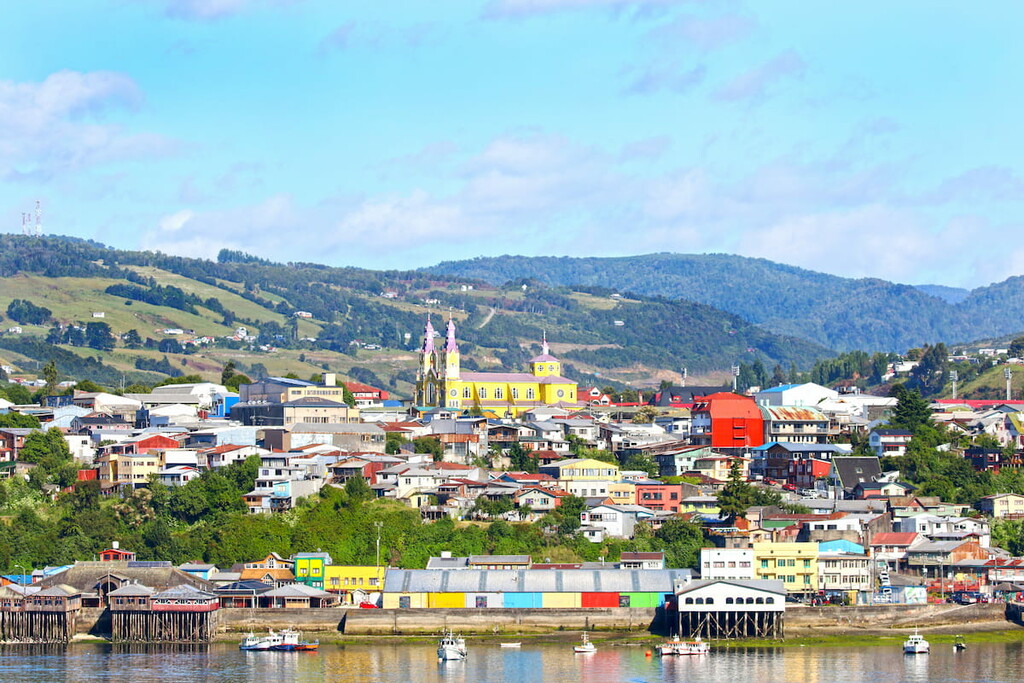 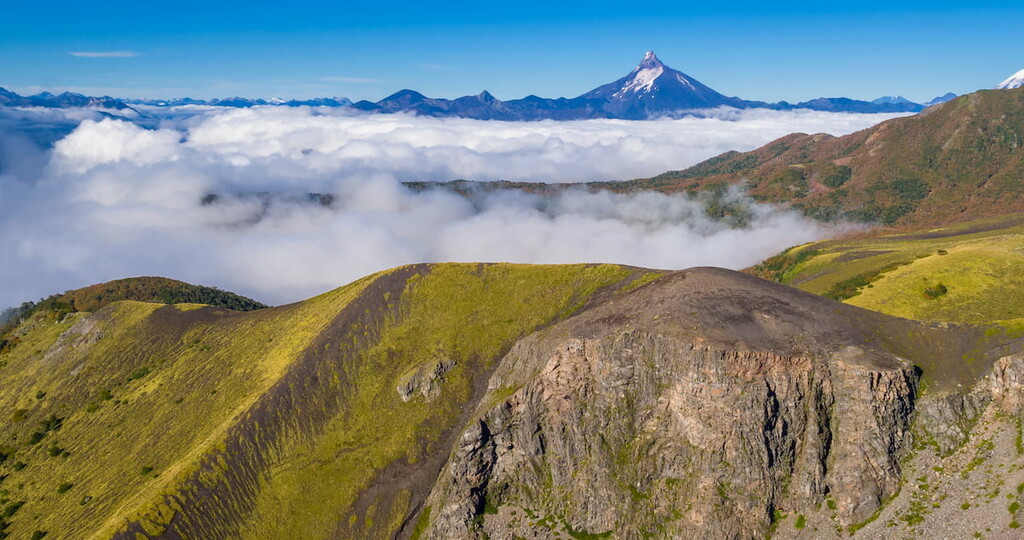 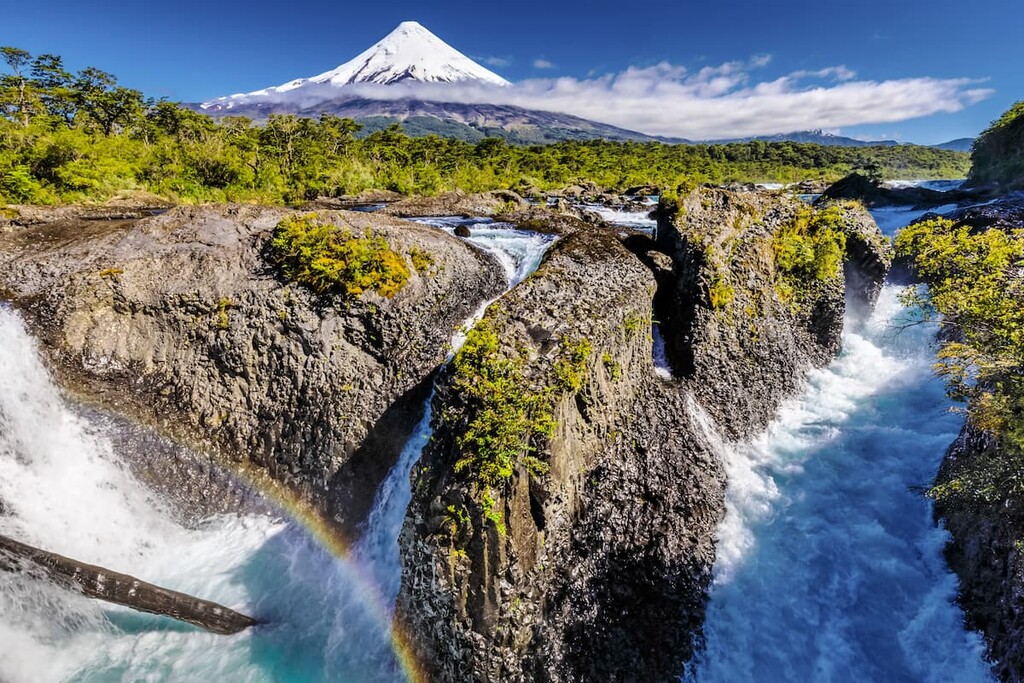