Spread over a rich and fertile Valdivian landscape is the Los Ríos Region, known for its very rural demographics and large indigenous and German communities. This great green region is marked by a combination of rivers and lakes, flatlands and foothills, and mountains and volcanoes that have come to characterize much of southern Chile.

In regards to mountains and volcanoes, there are 135 that have been named, concentrated mainly in the Andes and along the coast. The tallest of these is the Villarrica Volcano at 2,861m/9,386ft, though its prominence is just slightly surpassed by the Mocho Volcano, at a prominence of 1,587m/5,207ft. 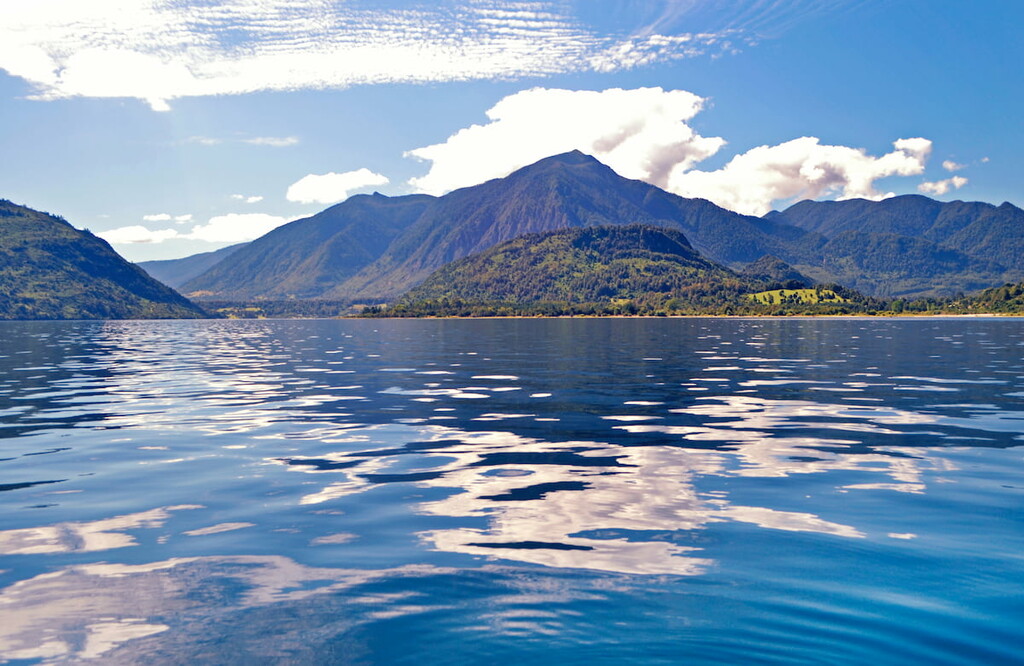 Los Ríos, placing 11th in both area and population out of all of the country’s regions, spans 18,420km2/7,116mi2 of area just north of Los Lagos, which it was once a part of, and just south of Araucanía. To the east, past the Andes, is the Argentinian province of Neuquen, and to the west is the Pacific Ocean.

Its capital city of Valdivia sits in the province of Valdivia, the northernmost of Los Ríos’ two provincial subdivisions, with the other province of Ranco in the southern half.

The highest point in this section of the Chilean Coast Range, for example, is Cerro Oncol, at around 715m/2,346ft tall, while the volcanoes and mountains of the Andes often reach heights over 2,000m/6,561ft. Many of the tallest peaks in the region, in fact, are some of its plentiful volcanoes, such as the aforementioned Villarrica and Mocho, as well as the Choshuenco and Quetrupillán.

Two main rivers, the Valdivia and Bueno, run through the region, with numerous tributaries as well. Bueno River flows from Ranco Lake, the largest in the region and fourth largest in the country, which contains several islands within itself. Ranco is but one of many lakes in the region, including some belonging to the Seven Lakes drainage basin, like Riñihue, Panguipulli, and Calafquén.

The climate of Los Ríos, like its neighbors, is largely humid, oceanic, and temperate, with the Valdivian temperate rain forest comprising much of its wilderness. It receives plentiful rainfall, especially by the coast, making it one of the wettest regions in Chile.

One of the most interesting geological features of Los Ríos, owing to its extremely recognizable shape, is the compound stratovolcano of Mocho-Choshuenco, consisting of twin volcanoes Mocho and Choshuenco. The volcanoes, dormant for many years, are covered in part by a few glaciers, and both surround a heavily eroded caldera. Mocho, specifically, is of an andesitic and dacitic nature.

Other notable volcanoes include Villarrica and the Puyehue-Cordón Caulle Volcanic Complex. Villarrica, emerging in the Middle Pleistocene, is of a basaltic-andesitic composition and has an especially vibrant nature, containing a seasonal lava lake, producing strombolian eruptions and lava flows, and being one of the most active volcanoes in Chile. Villarrica also has volcanic caves and visible layers of ignimbrite, as well as permanent snow and glacier coverage.

The Puyehue-Cordón Caulle Volcanic Complex, including its namesake volcanoes, is a complex mountain massif with a similar geological makeup to other volcanoes of the region, but made up of a variety of calderas, stratovolcanoes, fissure vents, cinder cones, and lava domes. The Puyehue and Cordón Caulle volcanoes have been very active in recent history, and Cordón Caulle is a hotspot of geothermal activity with hot springs, fumaroles, and solfataras.

The geological formations of Los Ríos are overwhelmingly sedimentary, consisting typically of various combinations of conglomerate, sandstone, shale, siltstone, mudstone, and occasional tuff and coal. Some, like the Santo Domingo Formation, are Miocene in age, while others, like Panguipulli and Tralcán, date back to the Triassic.

In the Bahía Mansa Metamorphic Complex of the Chilean Coast Range, however, the formations are of a more metamorphic nature, consisting mainly of pelitic schist, greenschist, blueschist, and slate.

There is also a group of plutons called the Coastal Batholith of central Chile located within a metamorphic accretionary complex, as well as the Permian granite and granodiorite-comprised Futrono Riñihue Batholith in the Andes, the Jurassic granite Panguipulli Batholith around Panguipulli Lake, and the Mesozoic North Patagonian Batholith made of diorite, tonalite, and granodiorite.

These many geological features rest along and are often heavily impacted by the many fault zones in the region, like Reigolil-Pirihueico, Mocha-Villarrica, Futrono, Gastre, and the major Liquiñe-Ofqui Fault upon which many stratovolcanoes are aligned.

Historically, the geology of Los Ríos has lent itself to many mining operations, some of which are still active today. Coal, especially at places like Mulpún, Pupunahue, and Catamutún, is a particularly common mined resource, though there are endeavors for gold and limestone as well.

Common trees that can be seen in the region, particularly around the Andes, include the tepa, tineo, Chilean myrtle, winter’s bark, olivillo, coigüe, raulí, lenga, mañío, and ñirre. These trees are typically evergreen, providing green foliage year round, as is typical for the Valdivian forest ecosystem. Valdivian forests also come with thick underbrushes of bushes, moss, lichens, and ferns, creating incredibly diverse and lush forests.

The mammals of the Andes may include the uniquely tiny colocolo opossum, south Andean deer, mountain lion, gray fox, coypu, pudú, güiña, lesser grison, and Molina’s hog-nosed skunk. Other animals, like Darwin’s frog, Matuasto lizard, and a few other species of amphibian and reptile, can also be seen.

The Andes are also home to a wide variety of birds, such as the Magellanic woodpecker, house wren, Chilean pigeon, great grebe, and Andean condor, among many others.

Fitzroya or alerce trees inhabit many different locations throughout the region, including along the coastal Cordillera Pelada, where they are the most prevalent tree alongside winter’s bark, tineo, pilgerodendron, and coigüe.

Within the same mountain range, common Chilean forest animals like the güiña, mountain lion, lesser grison, pudú, and the Magellanic woodpecker can be found. The wetlands and coasts in the west also provide habitat to many black-necked swans, Chilean seaside cinclodes, white-crested elaenias, red-legged cormorants, and other aquatic and coastal bird species, as well as some aquatic mammals like the sea lion.

For many years, the primary inhabitants of what would become the Los Ríos Region were various peoples of the Mapuche culture, who established horticultural and agricultural communities throughout the region. Particularly, Los Ríos was mainly populated by the Huilliche people, who still have communities in parts of Los Ríos and its neighboring regions today.

Spanish arrival and conquest began in the mid-1500s, earmarked by the founding of the city of Valdivia in 1552. Despite the foundation of this heavily fortified Spanish city, the Mapuche continued to have a stronghold on the surrounding land. There would be centuries of power struggles as the Spanish attempted to exert control over the area, however, resulting in violent conflicts, rebellions, and a decreasing Huilliche population.

The city of Valdivia became annexed into what would become independent Chile in 1820, followed by the province of Valdivia in 1826. Ensuing colonization and immigration would change the demographic landscape of Los Ríos, with the growth of large German communities and beer and cured meat industries.

The 1900s saw waves of natural disasters, like the Great Valdivia Earthquake, destroy swaths of towns and land throughout the Valdivian area.

Los Ríos as it is currently known did not exist until 2007, incorporating the province of Valdivia that had previously been part of Los Lagos, and creating the newer province of Ranco.

Los Ríos Region is home to many national parks and reserves designed to protect and preserve the lush nature and endemic species of southern Chile, offering endless opportunities for hiking, trekking, climbing, kayaking, horseback riding, or any number of activities.

Shared with the bordering region of Araucanía, the border is marked by the imposing presence of the Villarrica volcano, one of several to be found within Villarrica National Park. Monkey puzzle trees and fascinating animals like the Darwin’s frog, peregrine falcon, and Matuasto contribute to the park’s unique ecosystems.

The most notable trek is likely the Villarrica Traverse, a trek that can take anywhere from 3 to 6 days depending on what routes one takes, and which offers breathtaking views of volcanoes, glaciers, forests, lava flows, and ash fields.

Other notable trails include:

Alerce Costero National Park is the main destination to experience Chile’s coastal mountains within the Los Ríos Region, occupying a swath of land within the Pelada range. The park takes its name from the alerce tree that inhabits it, with some trees hundreds upon hundreds of years old.

Puyehue National Park, split between Los Ríos and Los Lagos, is a wonder of evergreen forests and dramatic volcanoes. The park is split into three sections, with the Anticura and Antillanca sections in particular seemingly covering the Los Ríos half.

The park includes an excursion trail to the Puyehue Volcano, which can take 2 or 3 days to complete, similar to the trail to the park’s famous strawberry foods. There are also popular trails to the Salto de la Princesa waterfall and through forests of hundreds-of-years-old coigüe trees.

Among the Andes is the Huilo-Huilo Biological Reserve, a microcosm of the plethora of natural wonders Los Ríos has to offer. With rich native forests, an immense complex of waterfalls, the eastern slopes of the Mocho-Choshuenco stratovolcano, and preserved populations of threatened endemic species, there is much to be seen along its trails.

The reserve offers many (often guided) opportunities for hiking, trekking, and climbing. Notable opportunities include the 5-hour ascent up Mocho-Choshuenco or 5-hour High Andean Ecosystem trek that reaches 1,560m/5,118ft above sea level, a 3-hour, snowshoe trek along the volcano, and many others, including:

Located near the city of Valdivia, Oncol Park provides sights of thick coastal rainforest and of the immense volcanoes and mountains that loom in the distance from atop the tallest peak in the Los Ríos portion of the Chilean Coast Range, Oncol Hill.

At the park, one can climb to the summit of the hill, where the land and ocean seem to bloom for miles. Though it is a smaller park, it still offers numerous other brief hikes for exploring the forest, making it a great stop for those near the city.

Other notable locations through Los Ríos include:

While the Los Ríos Region is quite popular for tourists, most cities are rather small in population, save for the capital city of Valdivia. Nonetheless, many of these smaller cities, coastal towns, or farming villages dispersed throughout the region boast a wealth of cultural and recreational opportunities.

The biggest city and capital of Los Ríos, with around 150,000 people, Valdivia is one of the most historically, culturally, and commercially significant cities in southern Chile. This significance is epitomized in the famous Valdivian Week festival that occurs in February, designed to honor its rich history through parades, art, theatre, and more. With a large German population, Valdivia is also host to Bierfest Valdivia, a regional festival similar to Oktoberfest.

Valdivia’s architecture, heavily impacted by various European styles, is likewise of significance, with buildings like the Municipal Market and the 19th century buildings in the neighborhoods by Yungay and General Lagos streets. Several urban nature parks and an arboretum display the natural beauty of Valdivia, and paths along the city’s coast allow for wonderful views of both that natural beauty and the aforementioned architectural beauty that define Valdivia.

Many destinations of note also lie within close proximity to the city, such as small coastal towns like Pilolcura and Curiñanco, historical mills, and the suburb of Torobayo, where the Kunstmann brewery can be visited.

The main airport for those travelling to Valdivia is the Pichoy Airport, with regular flights to and from Santiago. On land, one can access the city through the Pan-American Highway, with bus terminals serving both long and short distance routes. Owing to the numerous rivers that traverse Valdivia, there are a few ferries that may also be useful when travelling in and around the city. 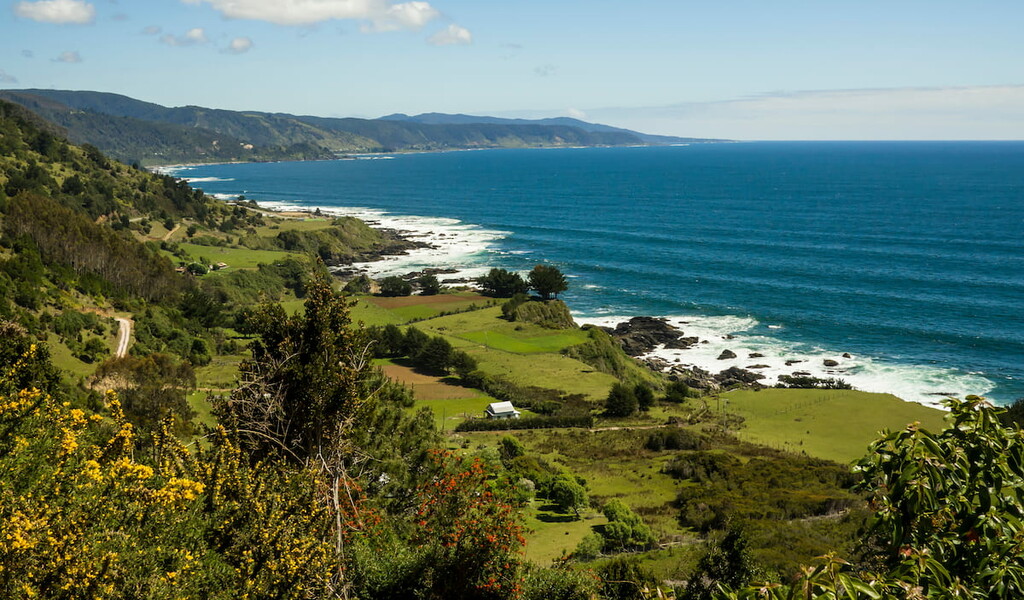 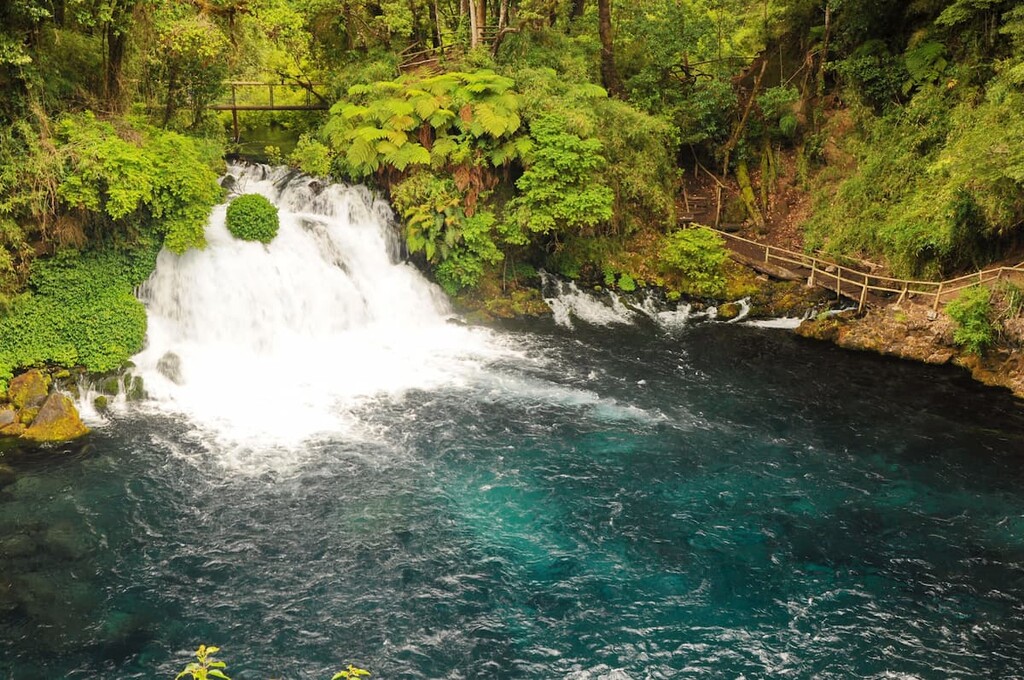 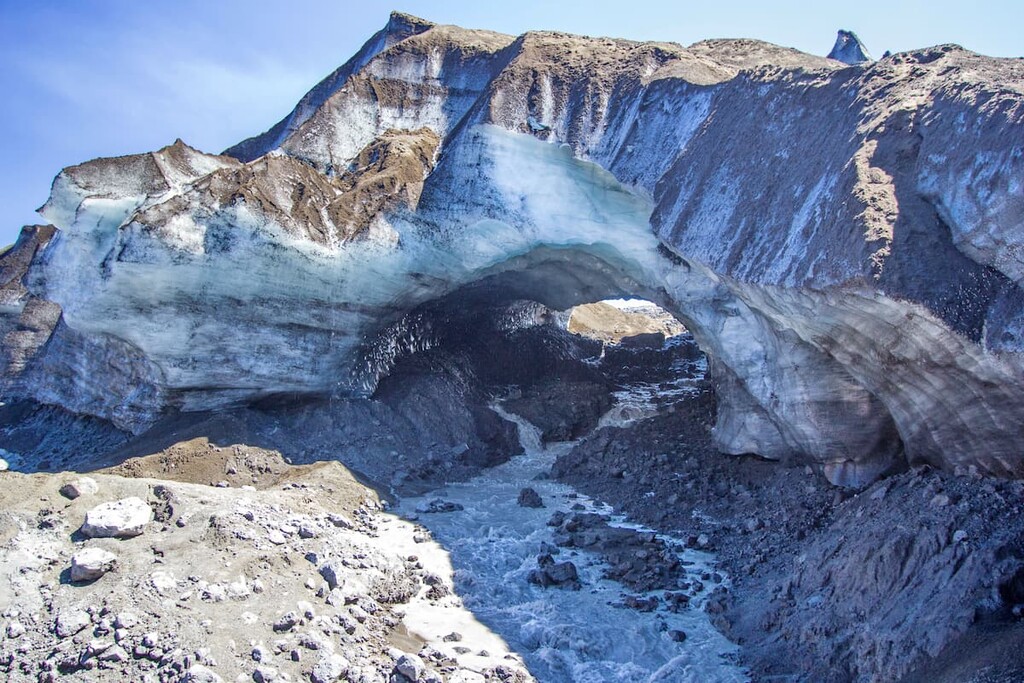 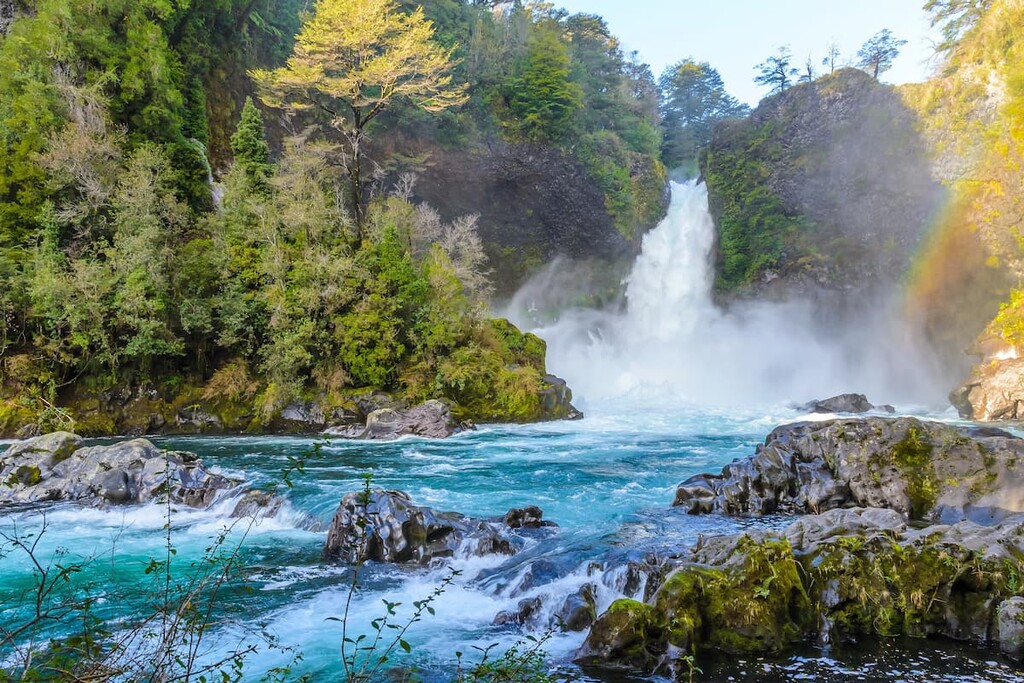 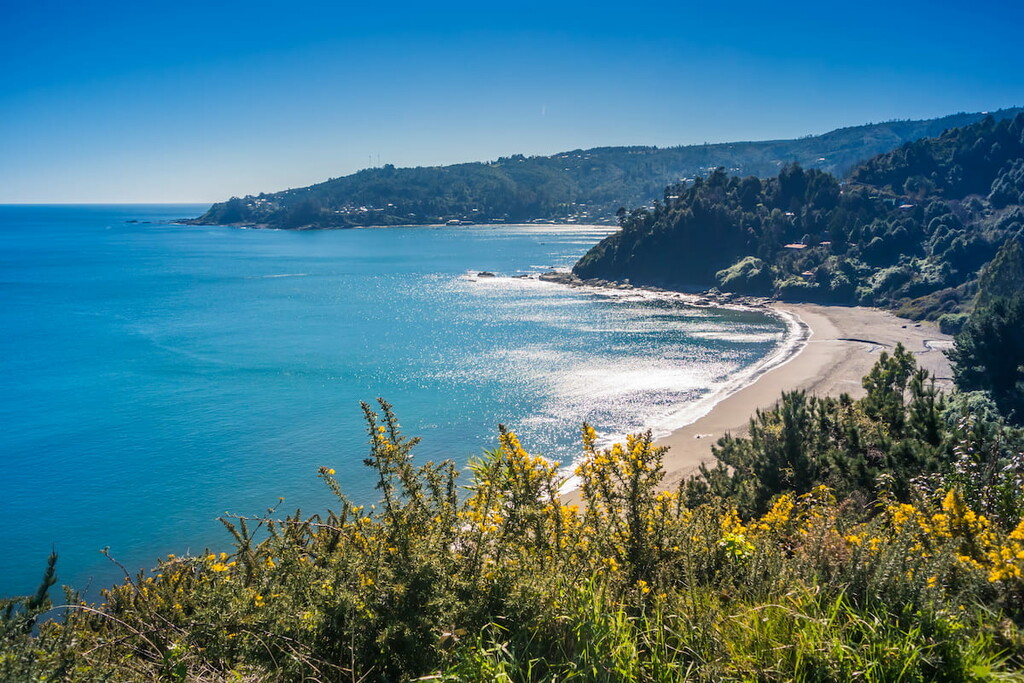 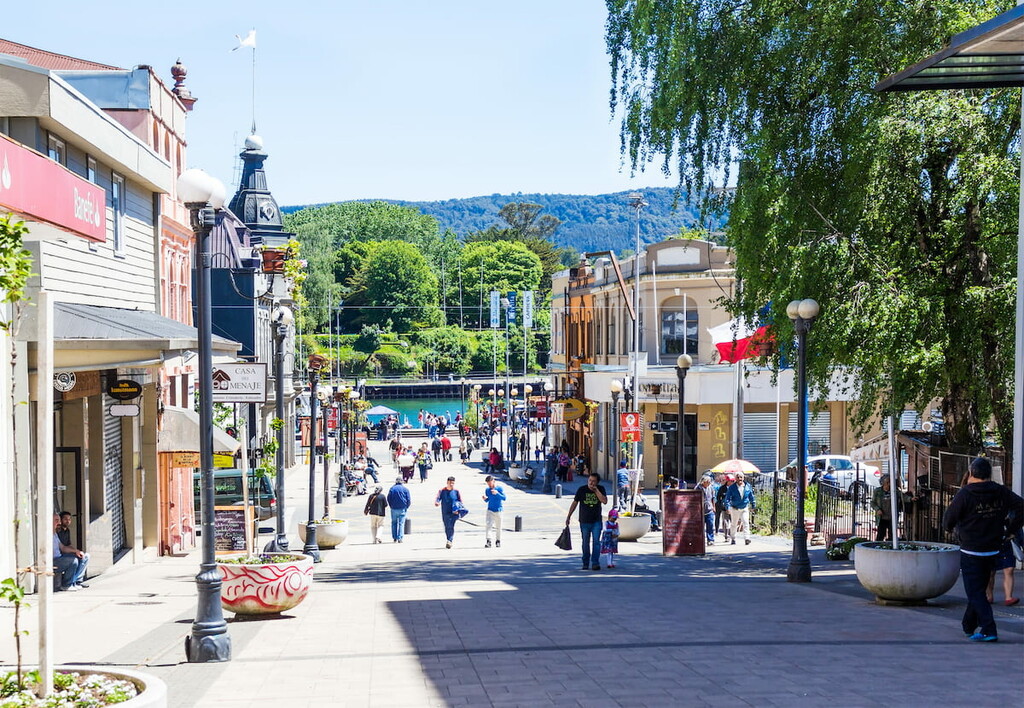