The Republic and Canton of Jura is one of the 26 cantons of Switzerland, and is situated along the northwestern border of the country. There are 101 named peaks within the canton. Mont Raimeux is the tallest and most prominent peak in the Jura, at 1,302 m (4,272 ft) in elevation and with 531 m (1,742 ft) of prominence. 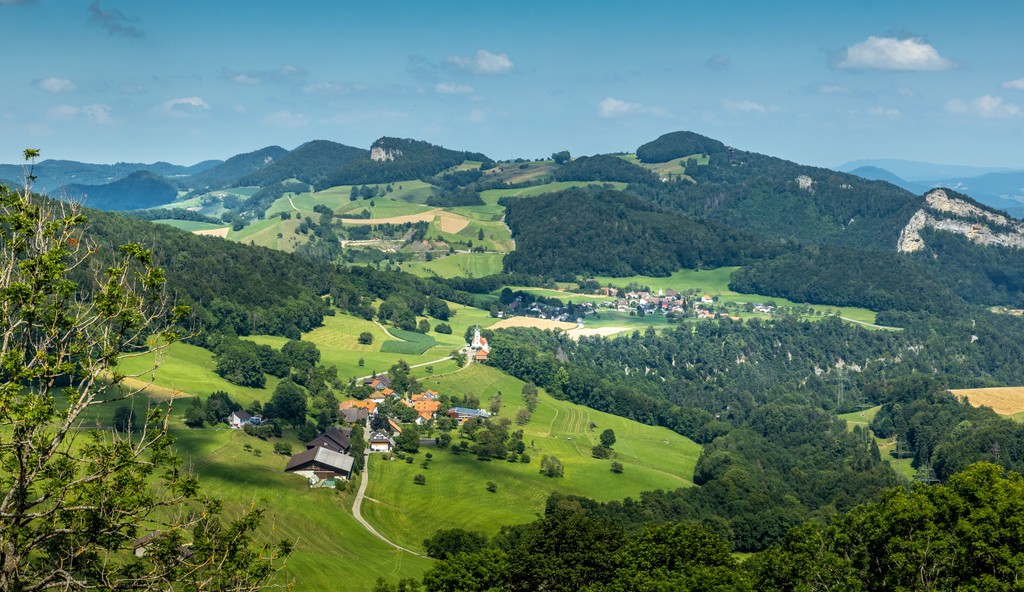 The canton of Jura lies along the northwestern border of Switzerland and shares a border with France. Geographically Jura is separated into two distinct regions with the Jura Mountains in the south and the Jura plateau in the north.

Despite being classified as a plateau, the northern stretches of the canton are marked by rolling hills and limestone structures. The Jura Mountains region of the canton features densely forested hillsides and wide sweeping valleys. This mountainous region, including the Jura plateau, is considered part of the Central European Uplands.

Jura spans 838.51 square kilometers (323.75 square miles) across northwestern Switzerland. Major bodies of water in the canton include the rivers Doubs and Birs which drain the region. The Doubs river joins the Saône before flowing into the Rhône and the Birs river is a tributary of the Rhine.

Additionally, Jura is located near a number of parks and recreation areas. Doubs Nature Park lies within the canton while Chasseral Nature Park and Thal Nature Park are situated to the south.

The Jura Mountains are one of the main geological features within the canton. These peaks began forming during the Cenozoic era during the same period as the Alps were formed in southern Switzerland.

This major mountain building period took place during the Alpine orogeny, which occurred between 65 million and 2 million years ago. The Tethys Ocean once lay between the supercontinents of Laurasia and Gondwana, south of present-day Italy.

As the two tectonic plates collided with one another the ocean began to retreat. The immense pressure from the collision uplifted the region and formed the chain of mountains known as the Alpide Belt. This belt of mountains spans across southern Europe and into south-central Asia.

Besides the Jura Mountains and the Alps, the belt encompasses other major mountain ranges such as the Himalaya and Hindu Kush. As the peaks were being formed, present-day central Switzerland was thrust upwards, forming the Swiss Plateau.

The peaks in the canton were further created by a major deformational thrust that occurred during the Pliocene Epoch, around 5.3 to 2.6 million years ago. This thrust is situated in the southeastern portion of the range and helped form the base for the mountains.

A series of two monumental thrusts helped create the Jura Mountains that are visible throughout the canton today. The first of the two thrusts formed the peaks in present-day France while the second thrust formed many of the peaks within the canton. The mountains in the region feature alternating layers of limestone and marl.

Common tree species in the region include European beech, hazel, yew, Sycamore maple, and various species of pine tree. The plateau region of the canton features less tree coverage and is often home to populations of sweet woodruff, clovers, ivy, and spleenwort. Early purple orchid is also common while various grasses populate the wetlands and moors of the canton.

The major rivers in the canton are home to graylin, pike, whitefish, and Doubs zebra trout. Ducks are common near the waterways of the region along with various swallows and songbirds. Larger birds include white storks and long-eared owls.

Humans have inhabited the land within and surrounding the canton of Jura as early as 13,000 BCE. Archaeological evidence showcases remnants of early human inhabitation through Magdalenian hunting camps.

During the rule of the Roman Empire, land throughout present-day Switzerland was under Roman control. The Romans constructed a road connecting Biel/Bienne to Petinesca which crossed the current canton and the Jura Mountains. After the fall of the Roman Empire the region continued to steadily grow in size, building upon the established villages.

During the fifth century the Burgundians invaded the region and declared it as part of Upper Burgundy. The Germanic speaking Alamanni people began settling around Lake Bienne, just south of the canton, from the sixth to eighth centuries.

In 999 CE, the king of Burgundy donated much of the land that makes up present-day Jura to the bishop of Basel. For around 800 years, up to the French Revolution, the region remained a sovereign state within the Holy Roman Empire.

Following the Treaty of Westphalia in 1648, Jura had close ties with the Swiss Confederation. At the Congress of Vienna in 1815, the Jura region became part of the canton of Bern. This union caused much distress between the French-speaking and Roman Catholic people of Jura and the German-speaking and Protestant people of Bern.

Following World War II, a seperatist movement campaigned for a secession of Jura from Bern. A constitution was accepted in 1977 and in 1978 the split was made official. The following year Jura joined the Swiss Confederation as the 23rd canton of the country.

A southern portion of the canton of Jura opted to not split and is still part of Bern, referred to as Bernese Jura. Today the canton is home to around 75,000 residents with an economy centered around agriculture, watches, textiles, and tobacco.

Best Hikes in the Jura

Le Noirmont Trail lies in the western stretches of the canton. The loop trail begins in the village of Le Noirmont (German: Schwarzenberg) before descending down towards the Doubs river. The loop trail follows along the river’s edge before climbing steadily back up to the village. Hikers can witness the rocky ridgelines and forested hillsides that define much of the region. The loop trail is 15 km (9.4 miles) in length and features 831 m (2,726 ft) of elevation gain.

The Pond of the Gruère trail lies in the southwestern section of the canton, within Doubs Nature Park. This gentle route takes hikers around the Pond of the Gruère with views of the water and the marshy terrain throughout. The Bois de la Chaux forest lies directly next to the trail. The loop is 2.4 km (1.5 miles) in length and features 49 m (160 ft) in elevation gain.

The Trans Swiss Trail is a long-distance route that travels across the country totaling 488 km (303 miles) throughout its 32 stages. The first stage of the trail begins in the town of Porrentruy in the northern stretches of the canton of Jura.

The trail winds gently through the Jura plateau before reaching the more forested hills of the Jura Mountains. This point-to-point stage is 16 km (10.3 miles) in length and features 660 m (2,165 ft) of elevation gain. Though the route is technically part of the larger Trans Swiss Trail, hikers can also enjoy an out and back day hike from either end of the trail.

Looking for a place to stay in Jura? Here are some of the best cities and villages to check out in the region:

Delémont (German: Delsberg) is the capital city of the canton of Jura. Home to around 13,000 residents, the city lies between the cities of Basel and Biel/Bienne. The historic city features medieval buildings and house facades while the Jurassic landscape extends in all directions.

Historical spots in the city include the medieval city center, two of the city gates (Porte au Loup and Porte de Porrentruy), Tour des Archives, and the Catholic church of Saint-Marcel, and the Castle of Domont which is now part of a restaurant.

The Chappuis-Fähndrich Museum showcases the history of the Jura region, offering visitors a look back into the culture of the Jura Mountains. Delémont acts as a great starting point for exploring the surrounding countryside by foot, car, or bike. Visitors can also explore the region via the Sentier Auguste Quiquerez; a circular path that connects Delémont and Soyhières.

Porrentruy (German: Pruntrut) is a city home to around 7,000 residents situated in the northern stretches of the canton. The city acts as the cultural center of northern Jura and acted as the residence of the prince bishops of Basel for over 200 years.

Porrentruy lies near the canton’s border with France and marks the second largest city in the canton. The Old Town region features houses in the Gothic, Aaroque, and Neoclassical styles. The Porte de France marks a remnant of the medieval city wall, built in 1563. Other sites to see in the city include the Samaritan Fountain, Swiss Fountain, church of Saint Pierre, church of Saint Germain, and the castle towers of the residence of the prince bishops of Basel.

During the summer months the surrounding region is an ideal spot for hiking, biking, and exploring the Ajoie region to the north. This area is known for its plethora of vineyards and fruit orchards. 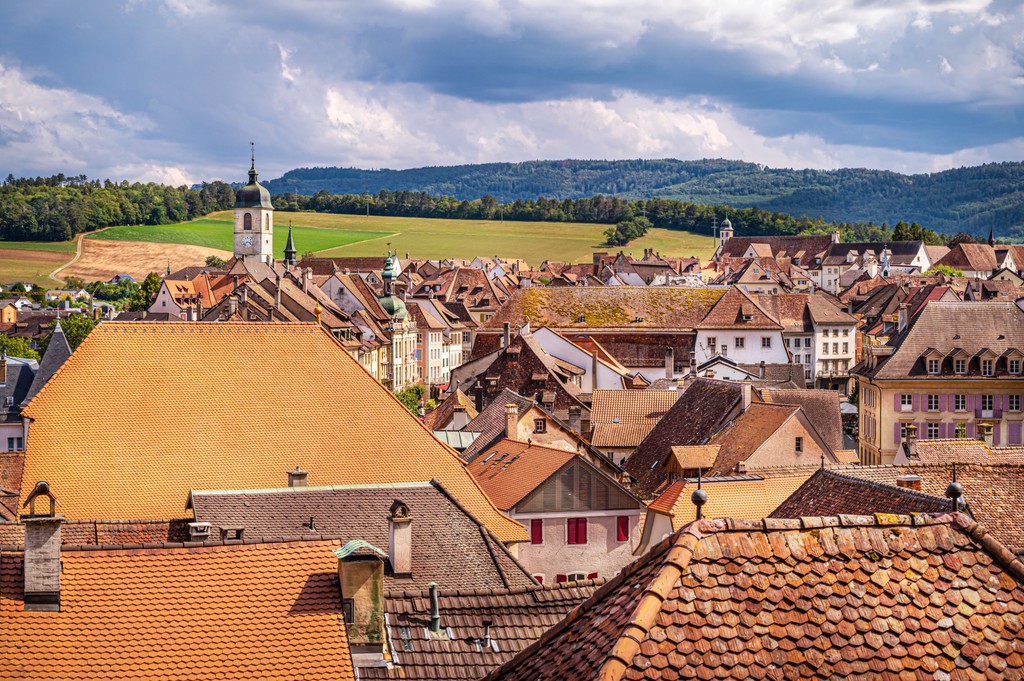 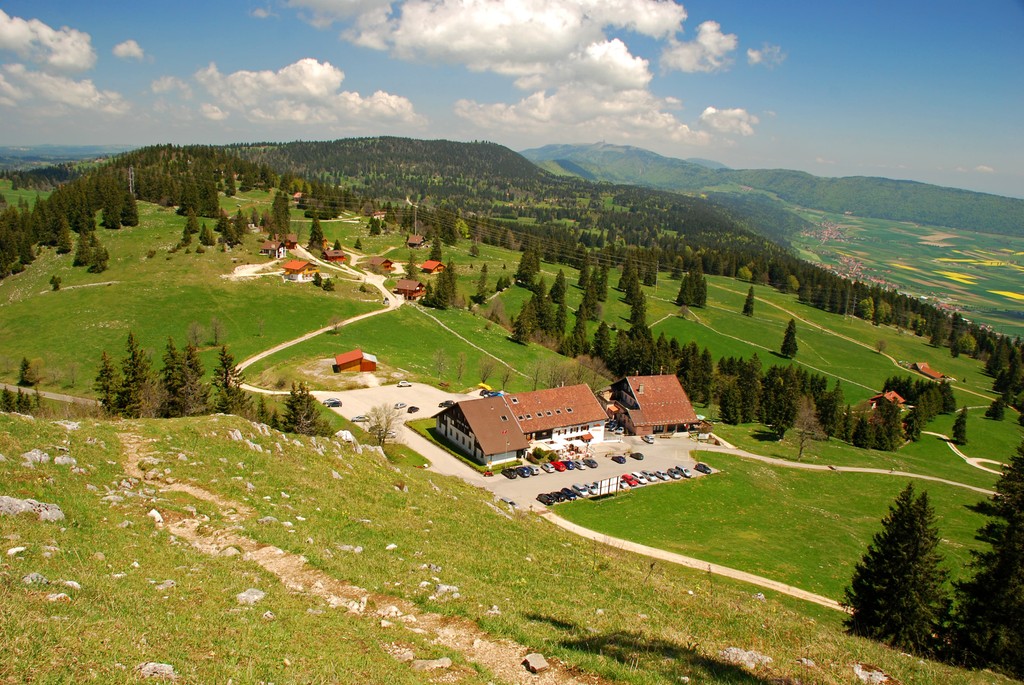 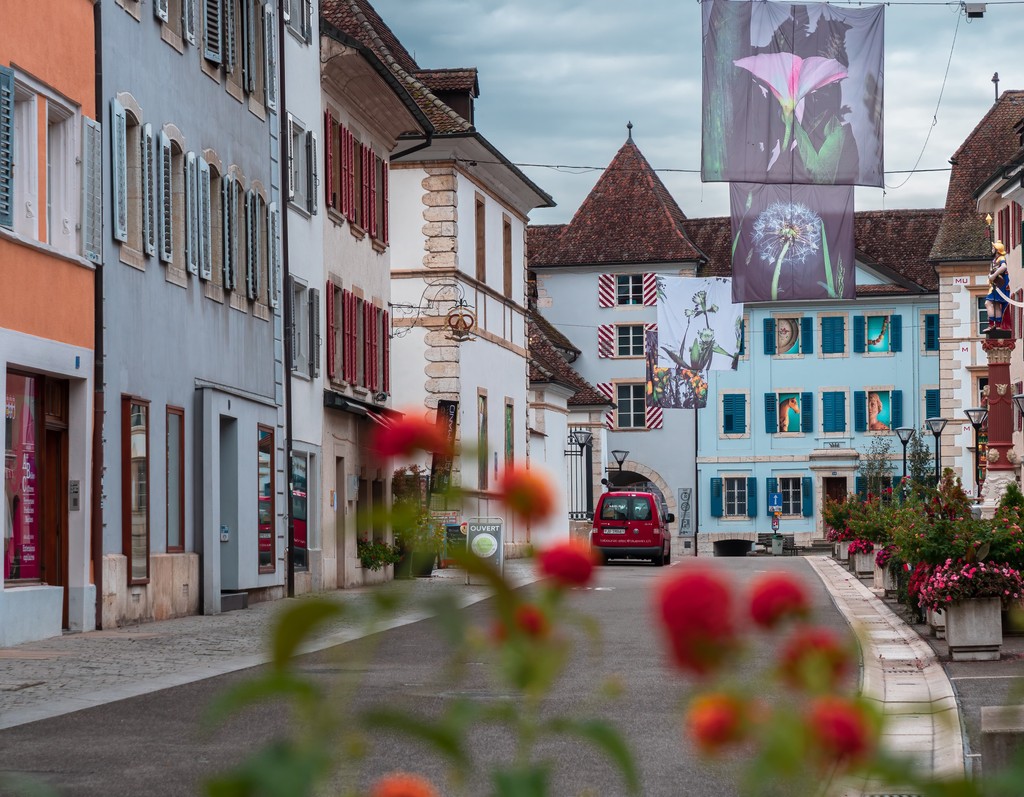 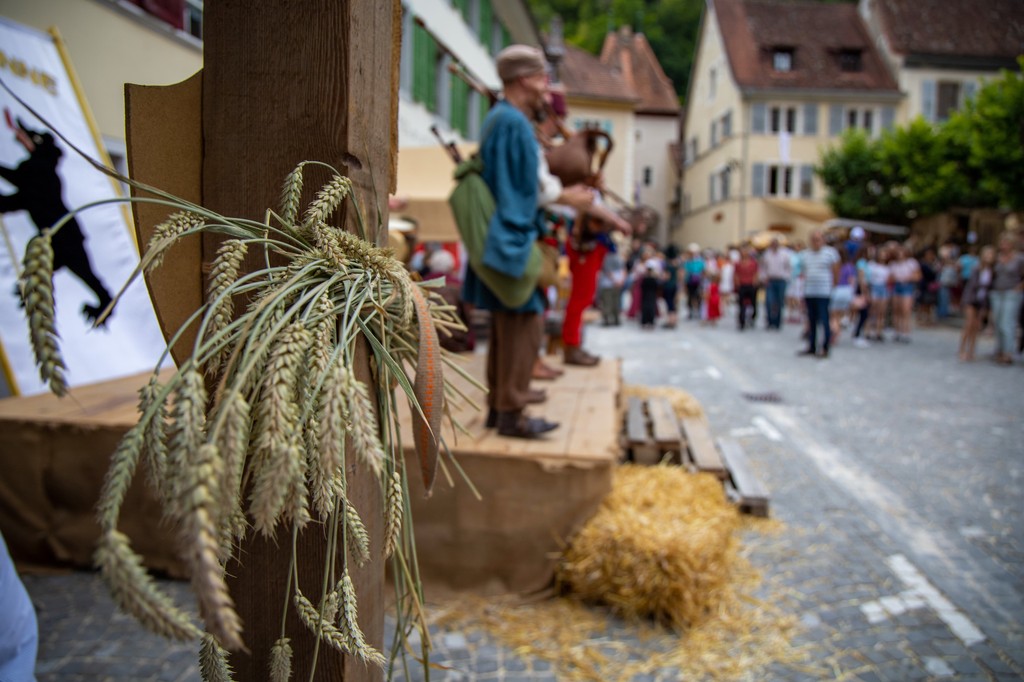 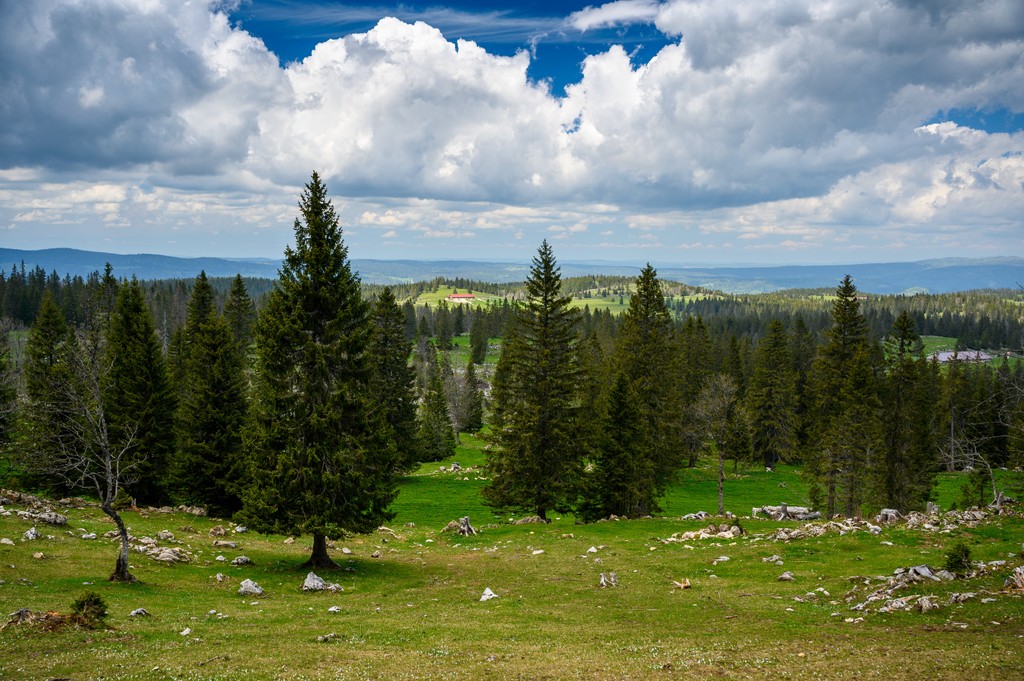 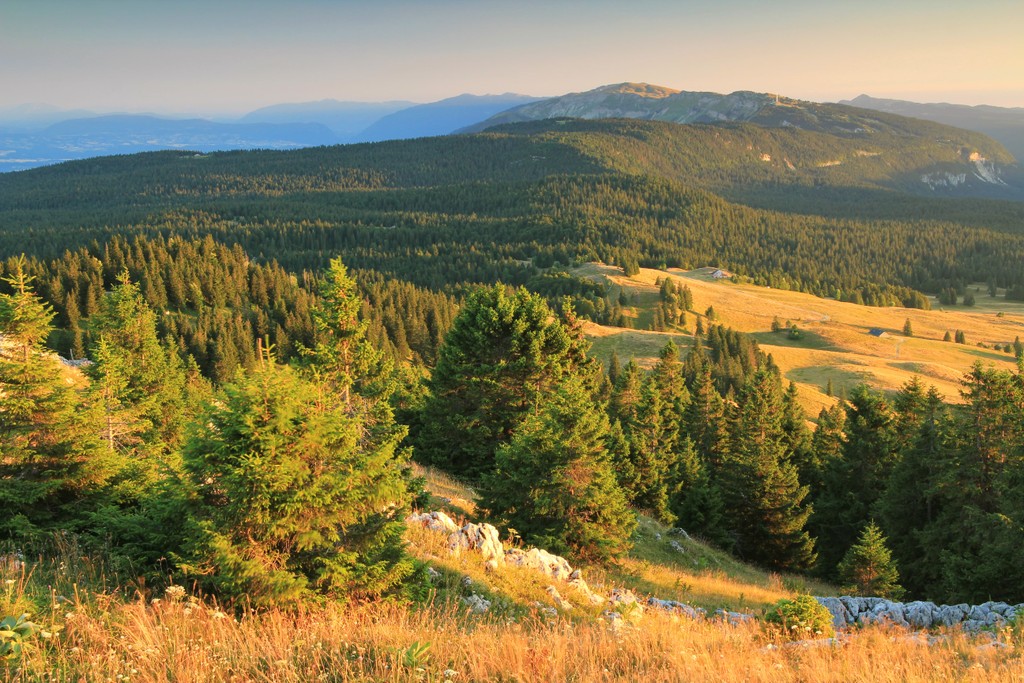 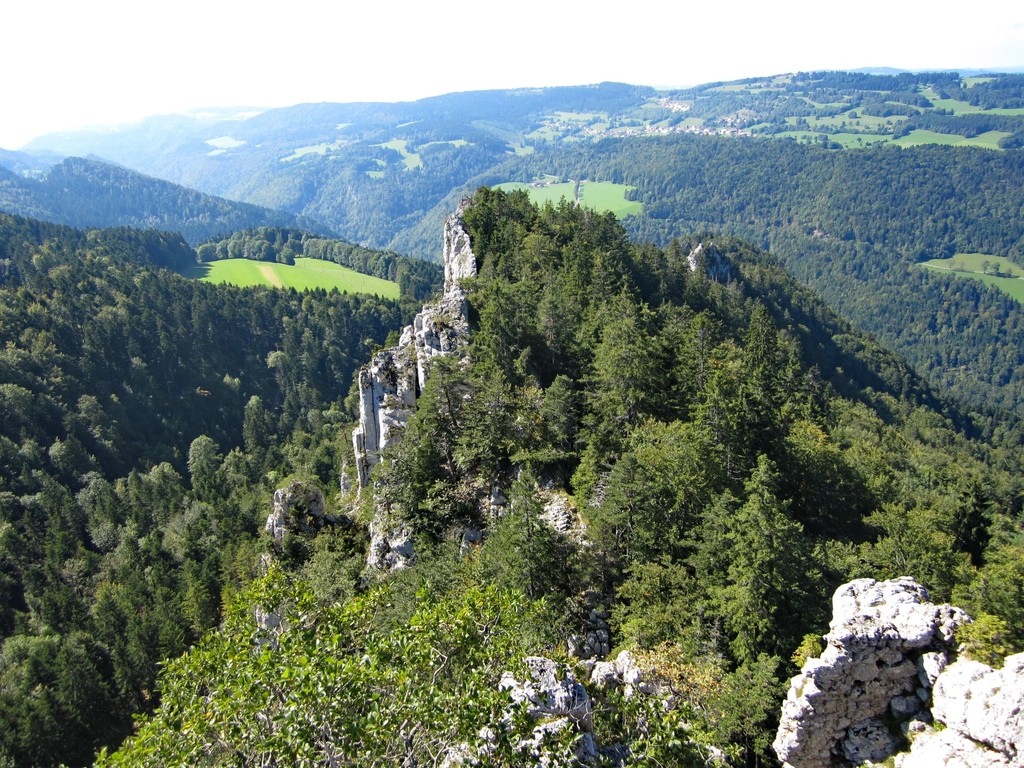