Named after a Hindi term meaning “snow-laden province,” Himachal Pradesh certainly lives up to its name, located with the Western Himalaya as one of India’s eleven mountain states. Himachal Pradesh is a state of great religious, cultural, and historic significance, being a popular destination for Hindu pilgrimage due to its many temples, and a notable site of Hindu festivities in general. 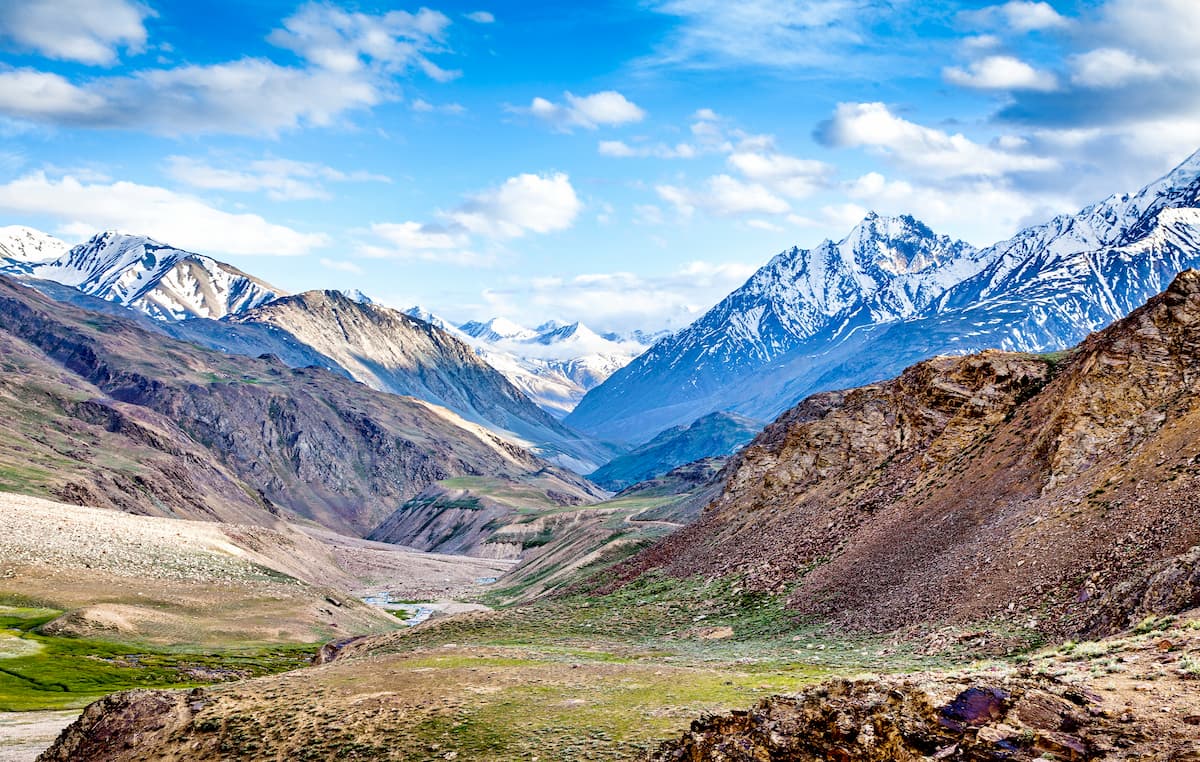 It has also become a major site for ecotourism and adventure tourism due to its dynamic and diverse terrain, with entirely new ecosystems to explore from the southwestern forests to the mountain slopes and deserts that loom above them.

Skiing, paragliding, horseback riding, rafting, and, of course, abundant hiking are some of the experiences possible among the 509 named mountains of Himachal Pradesh, the tallest of which is Reo Purgyil at 6,816m/22,362ft, and the most prominent of which is Shikhar Beh with a prominence of 2,234m/7,329ft.

Himachal Pradesh sits in northern India, bordered by the Union territories of Jammu and Kashmir and Ladakh to the north, the states of Uttarakhand and Uttar Pradesh to the south, Haryana to the southwest, and Punjab to the west. To the east, the state shares a border with Tibet.

Expanding around 55,673km2/21,495mi2 over the Western Himalaya, specifically on the foothills of the Dhauladhar Range, Himachal Pradesh, much like its neighbors, is an intensely mountainous state. The changes in elevation within the state result in much variation in climate, from the subhumid heat of the south to the alpine cold of the northeastern mountains.

The four main physiographic divisions of Himachal Pradesh include the Shivaliks, the lesser Himalaya, the Great Himalaya, and the Zanskar range, in an approximate south-to-north order.

The state has two capitals, Shimla and Dharamshala, known as the “summer” and “winter” capitals, respectively. Dharamshala, located right at the edge of the Himalaya in the northern portion of Himachal Pradesh, experiences heavy rainfall, a contrast to the mountain deserts of the east and the relative dryness of the south.

Nonetheless, Himachal Pradesh as a whole undergoes three seasons throughout the year, namely summer, winter, and a rainy season.

Himachal Pradesh mainly consists of Precambrian rocks assembled during the India-Asia collision and the orogeny that formed the Himalaya. Generally speaking, elevation increased from southwest to northeast, with a range of elevations from several hundred to over 6,000 meters at the peak of Reo Purgiyl.

The Indo-Gangetic Plain is an alluvial plain consisting of sediments eroded from the mountains of the Himalaya, while also receiving much sediment flux from major rivers. The plain is bounded by the Main Frontal Thrust, particularly in the northeast.

The Sub-Himalayan sequence consists of layers of sedimentary rocks from the Paleocene to the Pliocene, including sandstones, silstones, shales, limestones, conglomerate, and some quartz and caliche. In turn, the sequence has two main sub-groups: the shallow-marine deposits formed from the Paleocene to Eocene, and the continental deposits formed from the Miocene to Pliocene, with an Oligocene unconformity dividing the two.

Further past the Lesser HImalayan Sequence is the Greater Himalayan Crystalline complex, made of high-grade metamorphic rocks from between the Paleoproterozoic and Ordovician. The various layers of the complex contain paragneiss, schist, and orthogneiss; leucogranite; and staurolite, kyanite, and sillimanite. At its base the complex is bounded by the Main Central thrust, with the South Tibet detachment bounding it at the top.

Lastly, there is the Tethyan Himalayan Sequence, composed of fossiliferous sedimentary stratea from the Neoproterozoic to Cretaceous, alongside igneous rocks from the Paleoproterozoic to Ordvocian. At its base, granitic gneiss around 1,840 million years old has been found.

The Indus-Tsangpo Suture bounds it from the northwest and the South Tibet Detachment at Tethyan’s base, while it over-thrusted the Lesser Himalayan Sequence, Sub-Himalayn Sequence, and Greater Himalayan Crystalline Complex during the Cenozoic, thus covering large expanses of Himachal Pradesh.

The uneven precipitation, typically focused in certain areas, has resulted in mass fluvial erosion, mainly along certain major rivers, as well as landslides and debris flow. All this denudation has exposed many rocks that were once buried deep into the earth.

As for glaciers, a little less than 10% of Himachal Pradesh experiences glacial coverage, with that percentage having changed for greater and lesser over time. Glacial melt has intensified fluvial discharge and glaciers themselves have eroded mountains through their natural processes.

As part of the Indian Himalayan Region, Himachal Pradesh is recognized as one of the richest and most valuable sources of biodiversity worldwide. Over 65% of the state is forest, but variations in elevation allow for a wealth of different ecosystems to occur, such as the cold deserts of the northeastern Lahaul-Spiti region.

One such national park, and a particularly important national park with great biodiversity and recognition as a UNESCO World Heritage Site, is that of the Great Himalayan National Park. The park represents the junction of the temperate forest Indomalayan realm to the south and the alpine Palearctic realm to the north, two of the world’s major biogeographic realms.

The Palearctic portions of Himachal Pradesh display, in part, the ecoregion of Northwestern Himalayan alpine shrub and meadows, where notable flora are krummholz and herbaceous plants, and notable fauna include snow leopards, Himalayan wolves, ibexes, marmots, markhors, and birds such as the lammergeier, golden eagle, and Himalayan griffon vulture.

The Indomalayan realm consists partly of Himalayan subtropical pine forests, which can be seen especially in the lower elevation of the Kangra district and in patches in the east. The pines are, evidently, the most significant flora of the region, with leopards and tigers in small numbers, and more common langurs, cheer pheasants, and chestnut-breasted partridge.

At just higher elevations than the broadleaf forests are subalpine conifer forests, to and from where many Himalayan animals migrate as the seasons change. The subalpine conifer forests are known, of course, for their conifer trees, such as firs and pines, alongside many endemic and vulnerable bird species and mammals such as brown bears, markhor goats, serows, and tahrs.

And at certain high elevations, especially in Pin Valley National Park, is one of the cold deserts of the Himalaya, with flora restricted mostly to sparse alpine trees and shrubbery, but a diversity of fauna such as ibexes, bharals, blue sheeps, Himalayan marmots, and far more.

Himachal Pradesh has long been inhabited by man, with tribes having resided in the region since the prehistoric era. It is believed that, of these peoples, the Kols and the Mundas were some of the first to take to the hills of Himachal Pradesh, with a second wave of inhabitants known as the Bhotas and Kiratas coming later, and a third wave of Aryans migrating to Himachal Pradesh from their homes off in Central Asia.

Eventually, Himachal Pradesh was divided into numerous chiefdoms, which were largely independent. Over the centuries, these chiefdoms faced many invasions and attempts at conquership, with some people successful, such as the conquering of Kangra by the Ghaznavid dynasty in the 11th century.

The Gorkha Empire, otherwise known as the Kingdom of Nepal, annexed parts of Himachal Pradesh after coming to power in the late 1800s, including the now-capital city of Shimla.

In the 1800s, as the British expanded their imperial desires into south Asia, Himachal Pradesh found itself under British dominion as well, officially proclaimed as part of the British empire in 1858. Once India received its independence, the Province of Himachal Pradesh was established in 1948, eventually merging with some neighboring regions and becoming an official state in 1971.

The expansive natural lands and mountain ranges of Himachal Pradesh offer endless opportunities for those looking to explore, whether it be long-term treks, day-long hikes, or mountaineering expeditions.

Trekking trails can be found all over the state, though many begin in Chamba, Pangi Valley, Bharmaur, Churah Valley, and the Manimahesh area. The diverse terrain and ever-changing elevation provide constant sights and adventure for any traveller, from the valleys to the slopes.

For general hiking, Himachal Pradesh is home to numerous national parks and wildlife sanctuaries where the beauty of the Himalaya and the northern Indian wilderness are on full display.

The Great Himalayan National Park is the largest and most popular of these parks, with over 1,171km2/452mi2 of land covering altitudes between 1,500m/4,921ft and 6,000m/19,685ft. This diversity of height results in a diversity of ecosystems and sights to be seen, which can be explored through an intricate web of trails running throughout the park.

In the mountain valley of Spiti is Pin Valley National Park, whose unique landscapes, species, and Buddhist architecture can be seen through traversing the park’s pathways and through the Bhabha Pass and Mantalai Lake treks that lead inside.

The Simbalbara National Park, meanwhile, resides within the lush green south of Himachal Pradesh, where dense forests give way to an abundance of extraordinary animals, such as bears and snow leopards, hornbills and parrots, and pythons and monitor lizards. The park’s many walking trails deem it an optimal location to see such creatures and enjoy the northern forests of India.

Other national parks of Himachal Pradesh include Inderkilla and Khirganga, alongside dozens of wildlife reserves and sanctuaries with their own hiking and trekking paths, such as:

Though Himachal Pradesh is only the 21st most populated state in India, with just under 7,000,000 people, it boasts numerous lively cities with stunning traditional architecture and great cultural and religious significance.

Perhaps one of the most striking features of Shimla is its architecture, a remnant of the British India era with its Tudorbethan and neo-Gothic style, alongside the more classic Hindu styles as seen in the city’s many beautiful temples. The Viceregal Lodge, Christ Church, Jakhoo and Kali Bari temples, and Himachal Pradesh State Museum are just a few examples of the variety and intricacy of architecture that can be seen in Shimla.

For general commerce and recreation, The Mall and The Ridge are two popular sites, the former being a major shopping street, and the latter being the site of Shimla’s many cultural activities and festivities. Local arts and crafts are popular commodities at Shimla’s shops and markets, and the city is surrounded by hills, waterfalls, and other notable natural scenery.

Furthermore, it is at Shimla where one can find the largest natural ice rink in South Asia, a major attraction to the city. With well developed transport services in and around the city, including the famous Kalka Shimla Railway, it is certainly a convenient and ideal location for visiting or lodging.

The winter companion and fellow capital to Shimla, located to its northwest, Dharamshala, a city of around 50,000 people, is likewise an important destination for those traveling through Himachal Pradesh. Dharamshala is particularly known for its tea gardens, where its famous Kangra tea is made.

Dharamshala also has shopping and entertainment districts, with malls, bazaars, cinemas, and a cricket stadium with surreal views of the mountains behind it. For many trekkers, Dharamshala is a common starting point for trails throughout northwestern Himachal Pradesh and the surrounding region.

The suburb of Mcleodganj within Dharamshala is also of significance, often referred to as “Little Lhasa” due to the large Tibetan presence and culture and for once being the residence of the Dalai Lama. 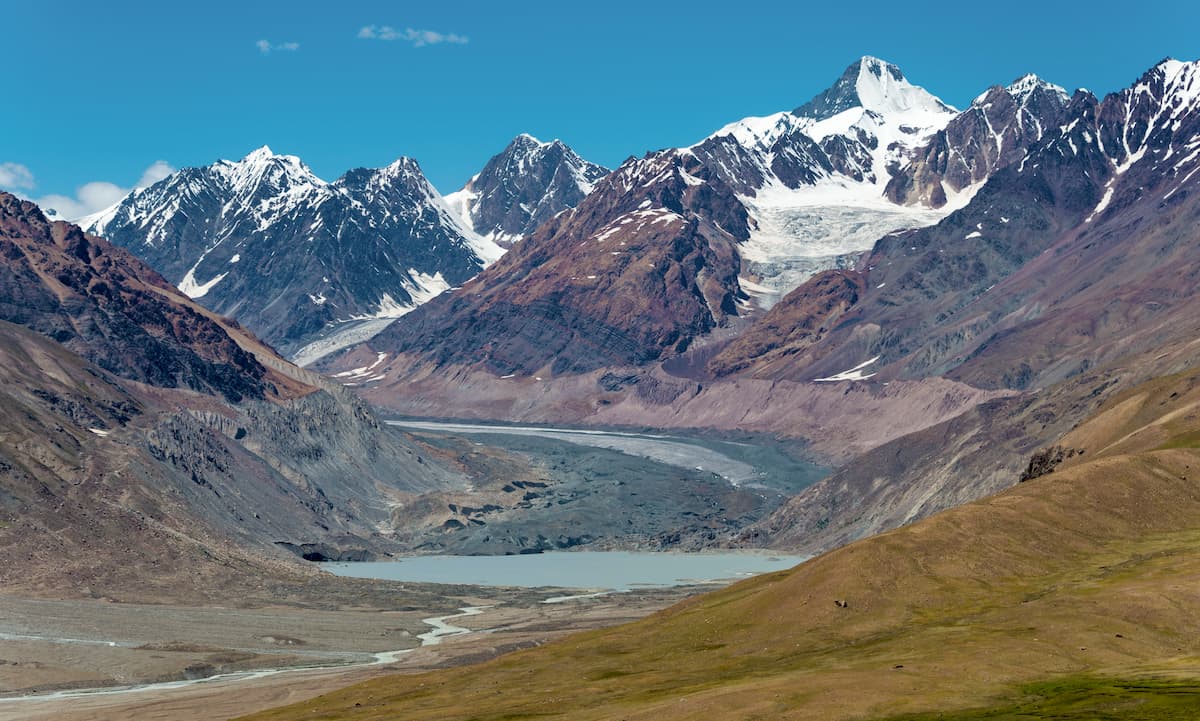 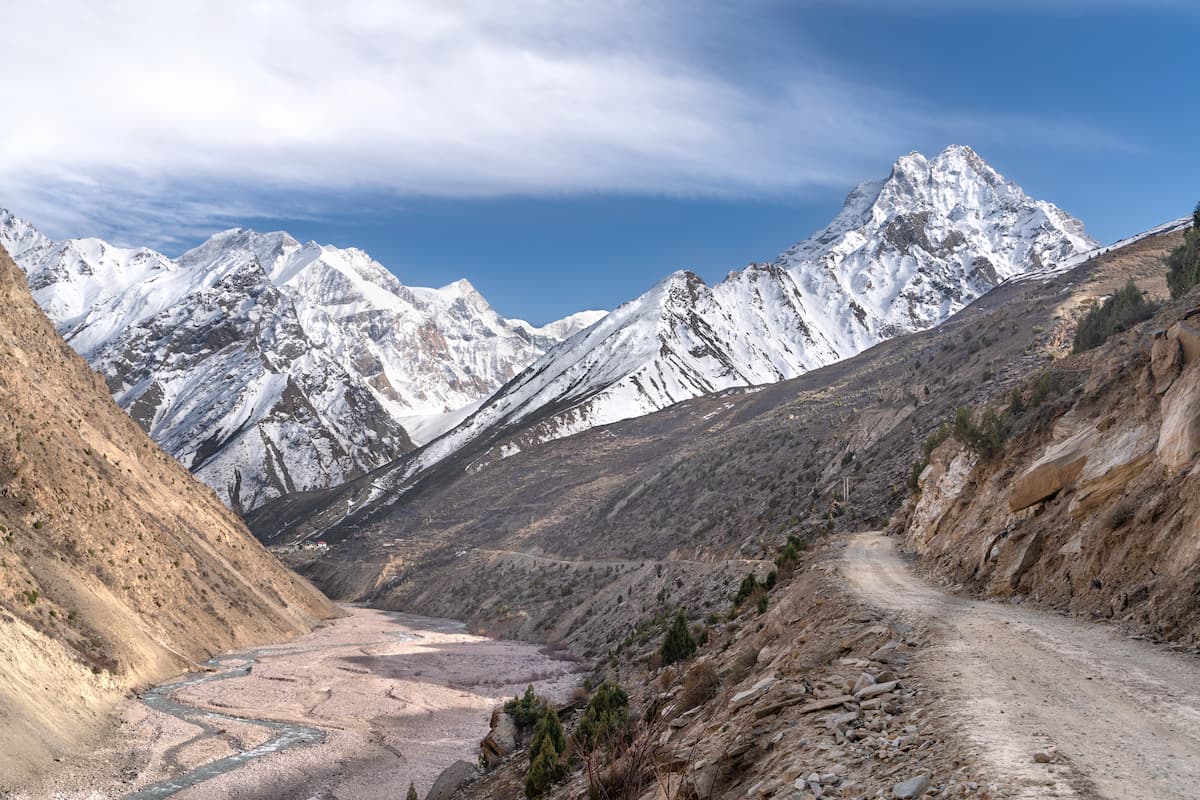 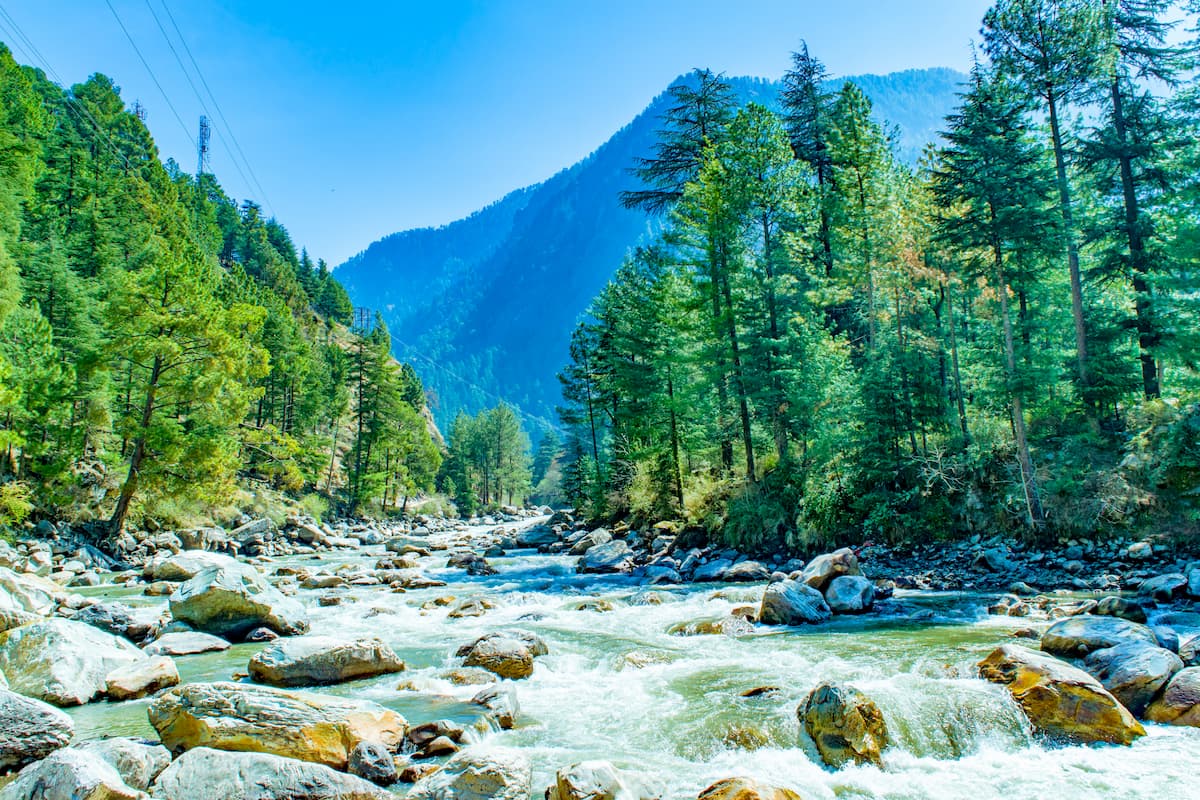 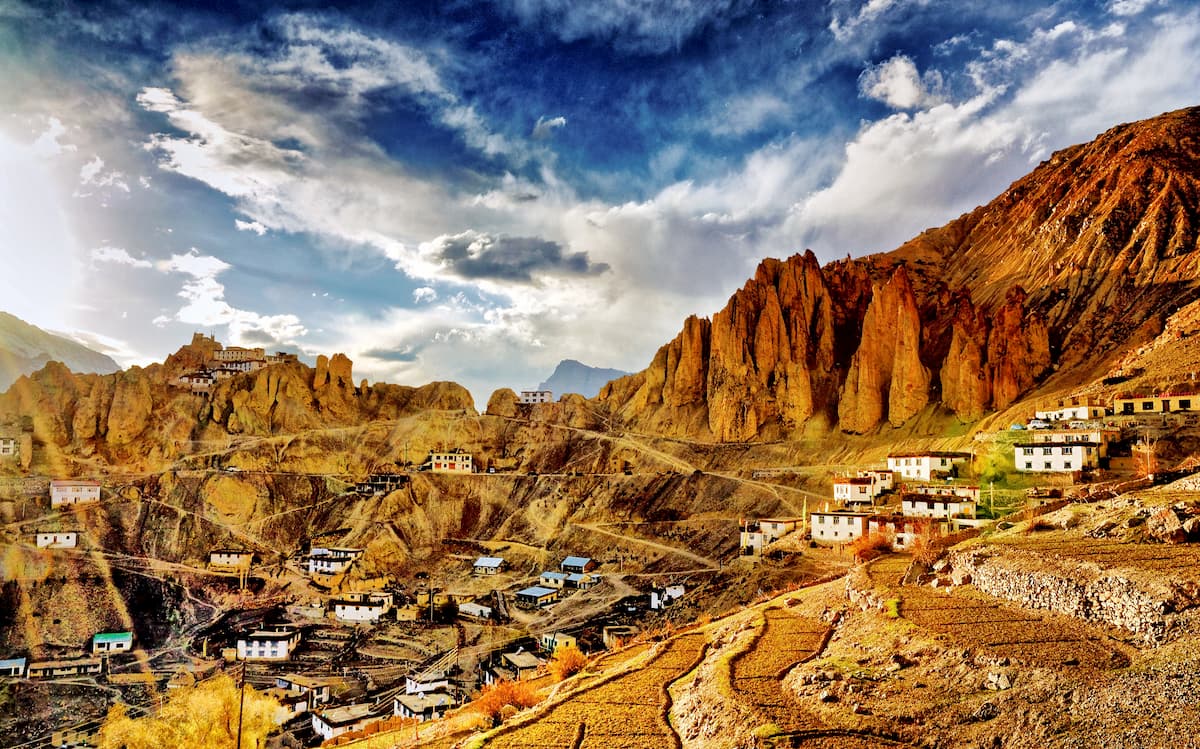 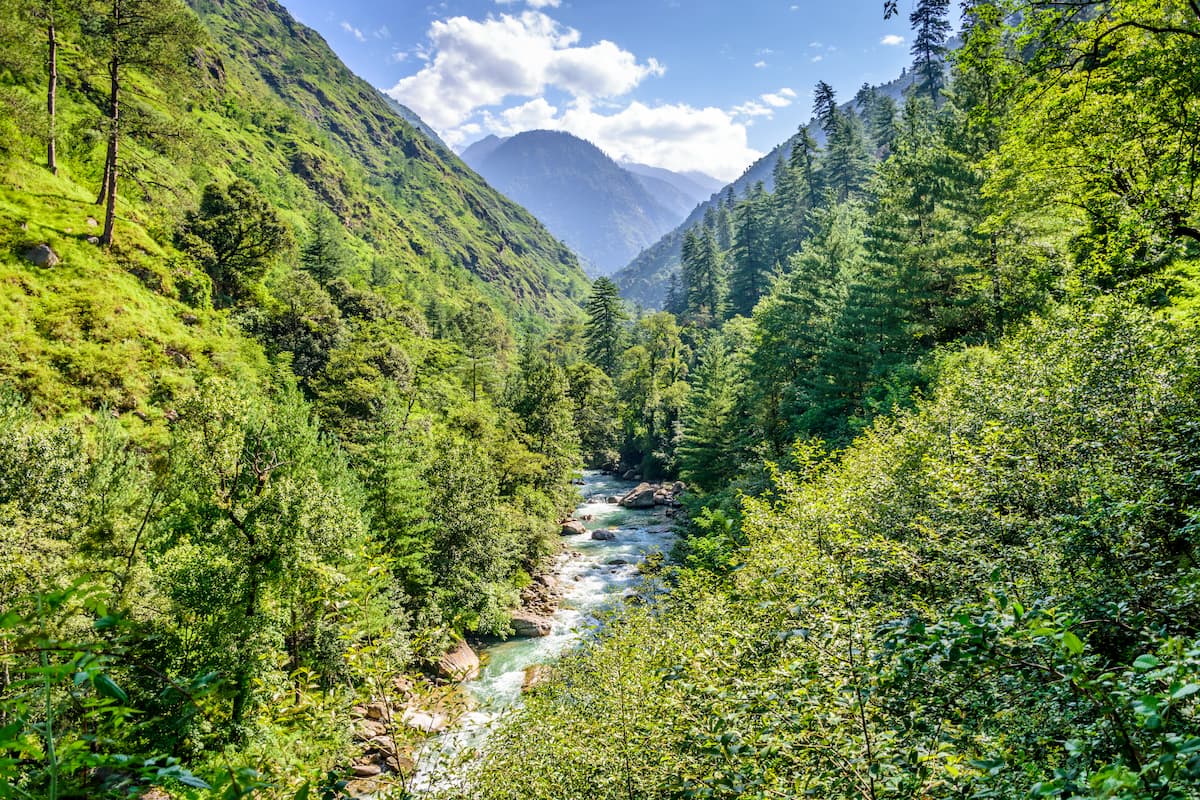 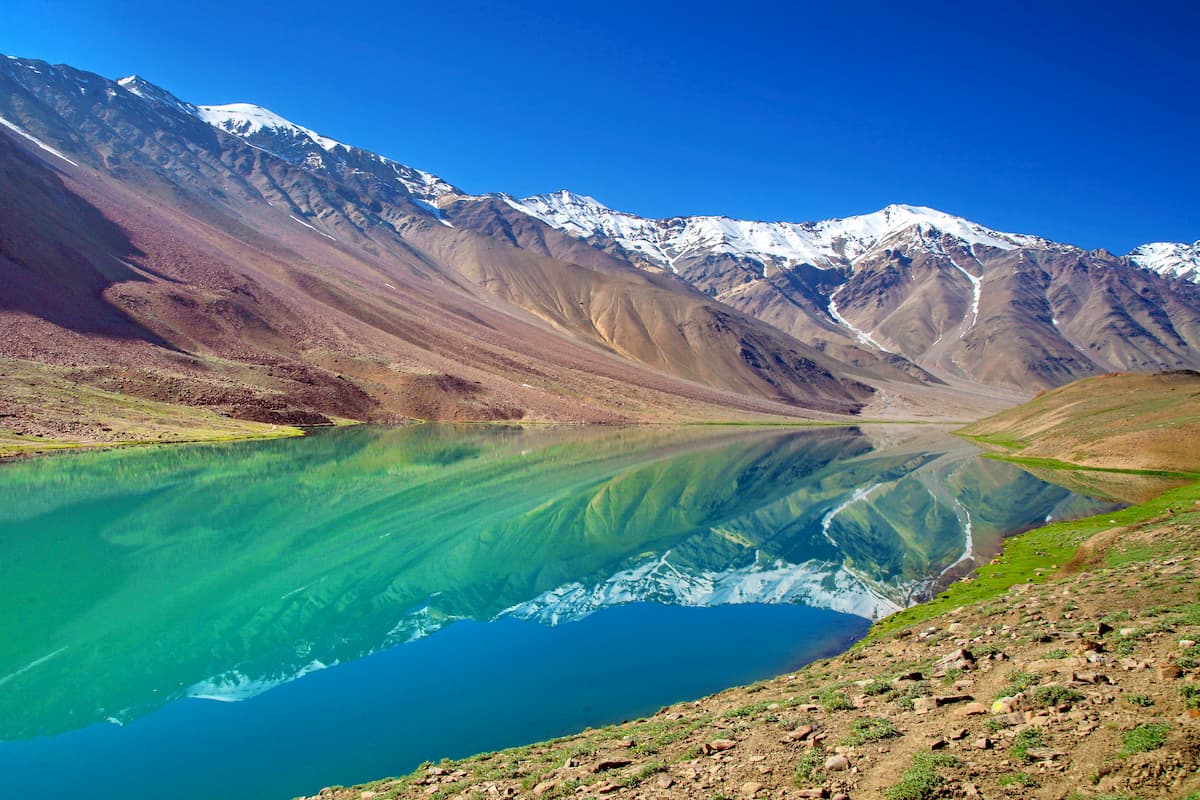