Located in the heart of the White Mountains of New Hampshire, the Presidential Range is a chain of rugged mountain peaks, the tallest of which are named after former American presidents. The range itself is an incredibly popular destination amongst hikers and other outdoor enthusiasts as its proximity to a number of major cities, such as Boston, Massachusetts, make it a prime spot for a weekend getaway in the mountains. 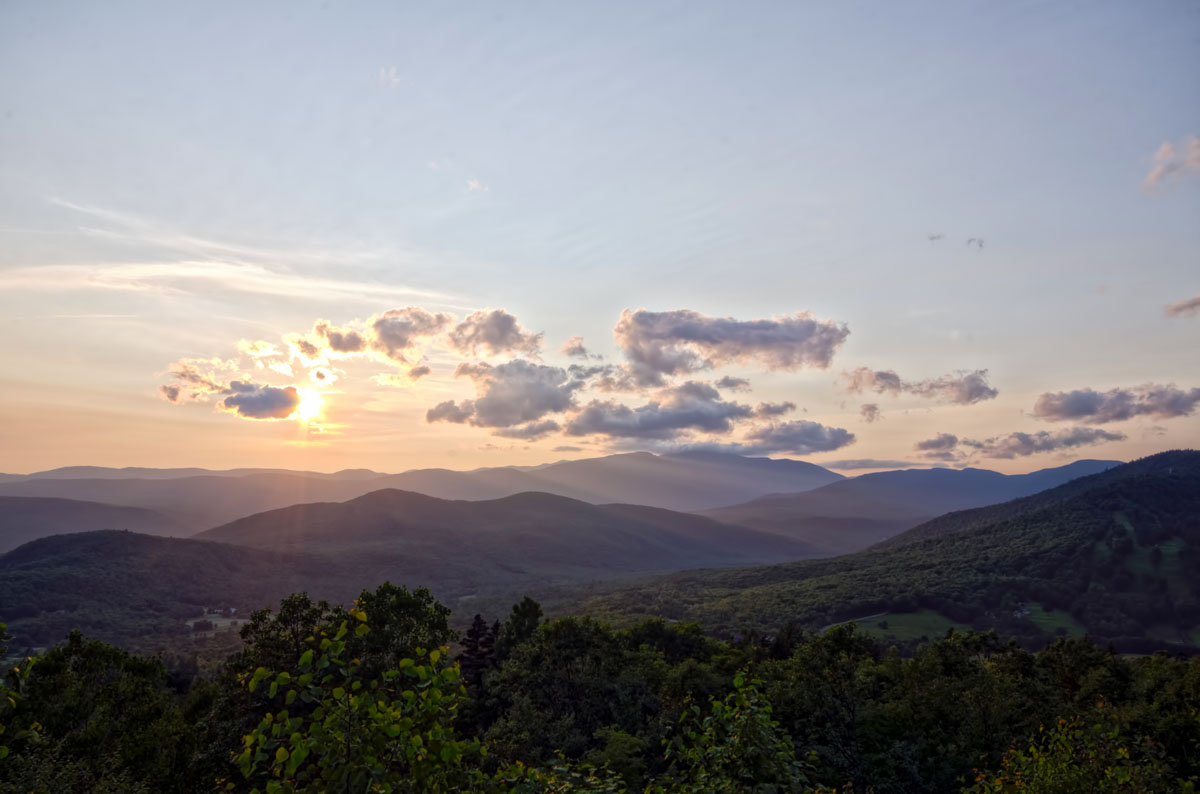 Indeed, the Presidential Range is home to the tallest peaks in the White Mountains, including the formidable Mount Washington (6,288ft/1917m) - one of the highest mountains on the East Coast of the United States. Thus, it’s no surprise that the Presidentials are popular amongst folks looking to add to their list of New Hampshire 4000ft summits or challenge themselves on some of the range’s many difficult trails.

Geographically, the Presidential Range forms the barrier that separates the Saco and Androscoggin River drainages that meet the Atlantic Ocean on the coast of Maine from the Israel and Ammonoosuc Rivers, which eventually meet the mighty Connecticut River and flow into the Long Island Sound.

Geologically, the Presidential Range, and, of course, the White Mountains and their parent range - the Appalachian Mountains - are ancient. Once located down near the equator and covered by a shallow inland sea during the Late Precambrian and Cambrian eras, the Presidential Range and the rest of the White Mountains formed during a mountain-building event known as the Acadian Orogeny in the Middle Devonian period, where collisions between plates and high volcanic activity created the granitic mountains we see today.

While the modern Presidential Range and White Mountains only once crest the 6,000 foot (1,828m) mark (with the 6,288ft/1917m Mount Washington), geologists believe that at their tallest, the Presidential range would have rivaled the Alps, if not the Himalaya in size. Although it can be difficult to imagine when looking at the mostly round Presidential Range of the 21st century, countless millennia of weathering and erosion, particularly during the last major glaciation shaped and formed the White Mountains we know and love today.

What the Presidential Range might lack in relative height, however, it makes up for in horrendous weather. Although bluebird days can and do happen, especially in the summer, the weather on top of the Presidential Range’s highest peak - Mount Washington - is some of the most ferocious in the world

In the winter time, incredibly high wind speeds, deep snowpack, and frequent whiteouts make Mount Washington a substantial challenge, so much so that many use the Presidential Range as a training ground for major expeditions in far off ranges. In fact, Mount Washington held the world’s surface wind speed record for some 62 years after recording a 231 mph (371 km/h) gust at the summit weather station in 1934.

Although an unmanned weather station in Barrow Island, Australia recorded a 253 mph (407km/h) wind speed in 1996 during Typhoon Olivia, the Mount Washington Observatory still likes to point out that their record happened just on a regular day - no typhoon required (though they did get a pretty bad storm up on the mountain).

The reason for all this bad weather? Mount Washington’s summit just so happens to sit a the very intersection between three major weather systems. There, the Northern Pacific, Atlantic, and Gulf weather patterns like to converge on the north to south Presidential Range, which is perfectly poised to take a hit from any storm that comes its way. Plus, the Presidential Range is home to some of the highest mountains around, so they tend to take the brunt of a storm. That being said, while you should certainly always be prepared for the worst, luckily, there are plenty of nice enough days in the Presidential Range to enjoy a hike in the mountains.

These days, the Presidential Range are home to a system of strenuous trails that make for a great trip into the mountains. There are 52 named mountains in the Presidential Range, the highest and most prominent of which is Mount Washington, so there are plenty of adventures to be had for those brave enough to seek them out.

Most people hike the range from north to south, starting their day off with the tallest peaks to make it easier on themselves as they start to get tired toward the end of their adventure. Although the Presidential Traverse is not one trail, but a link-up of many, we’ll go over the “standard” route here.

Starting on the Valley Way Trail, most hikers begin their ascent of Mount Madison early in the morning, stopping in at the Madison AMC hut to get the latest weather forecast before continuing on the Gulfside Trail toward Mounts Adams and Jefferson. Past Mount Jefferson, hikers walk through Monticello Lawn, where it’s easy to be tempted into taking a break, but there’s no time to lose when there are many more miles to be had before the day is done.

After the Monticello Lawn, hikers summit Mount Clay and set their sights on Mount Washington - the biggest ascent of the day. That being said, hikers can bail out on the Jewell Trail near Mount Clay if there’s foreboding weather on the horizon.

Up and over Mount Washington, and down the backside toward the southern Presidential Range, hikers descend the Crawford Path and negotiate a large boulder field as they make their way toward the Lake of the Clouds Hut to Mount Munroe. Past Munroe, hikers will then tag Mounts Franklin, Eisenhower, Pierce, and Jackson, taking in the rest of the view before finally meeting up with the road down in the valley below.

If a 23 mile (37km) day isn’t in the cards, another great way to spend a day in the Presidential Range is to make a summit attempt on Mount Washington itself. Starting at the Pinkham Notch Visitor Center, one can get an up-to-date weather forecast before setting out on the trail.

There are actually a number of different ways up Mount Washington, two of the most popular options being the Tuckerman Ravine Trail and Lion Head Summer Route. Both routes are about the same length (8.2 miles/13.2km) and have nearly the same elevation gain (4,300ft/1,310m) but the Lion Head Route is a bit steeper than the Tuckerman Ravine Trail so it tends to see slightly less traffic.

If you want more views and more solitude, you can head up the Boott Spur Trail instead. At 5.4 miles (8.69km) one way, it’s a bit longer than both the Tuckerman Ravine and Lion Head Summer Routes, but sees significantly less traffic and gets you above treeline more quickly for better views.

When you’re in the middle of the Presidential Range, it feels like you’re hundreds of miles from civilization, but it turns out that the range is actually fairly close to a number of large towns and major cities, which are great starting points for your adventure. Here are some of the main cities around the Presidential Range:

At just a two and a half hour drive south from the Presidential Range, Boston is a fantastic starting location for a trip to the White Mountains. Home to an international airport, a lively nightlife, and plenty of great food, it’s no surprise that Boston is a fantastic tourist destination.

Although the distance between the Presidential Range and Boston is too far for most people to consider driving between just for a day, Boston is a great place to fly into and rent a car to take into the mountains.

North Conway is the gateway to the Presidential Range, located just 30 minutes south of the Pinkham Notch Visitor Center. An outdoor recreationalists’ paradise, you can find countless retail outlets (there’s no sales tax in New Hampshire!) as well as pretty much any piece of outdoor gear you might need.

North Conway turns into a bustling ski town in the winter so you can expect plenty of other visitors year-round. But, this means there are plenty of small shops, hotels, bars, and other great places to check out when you’re not in the hills. 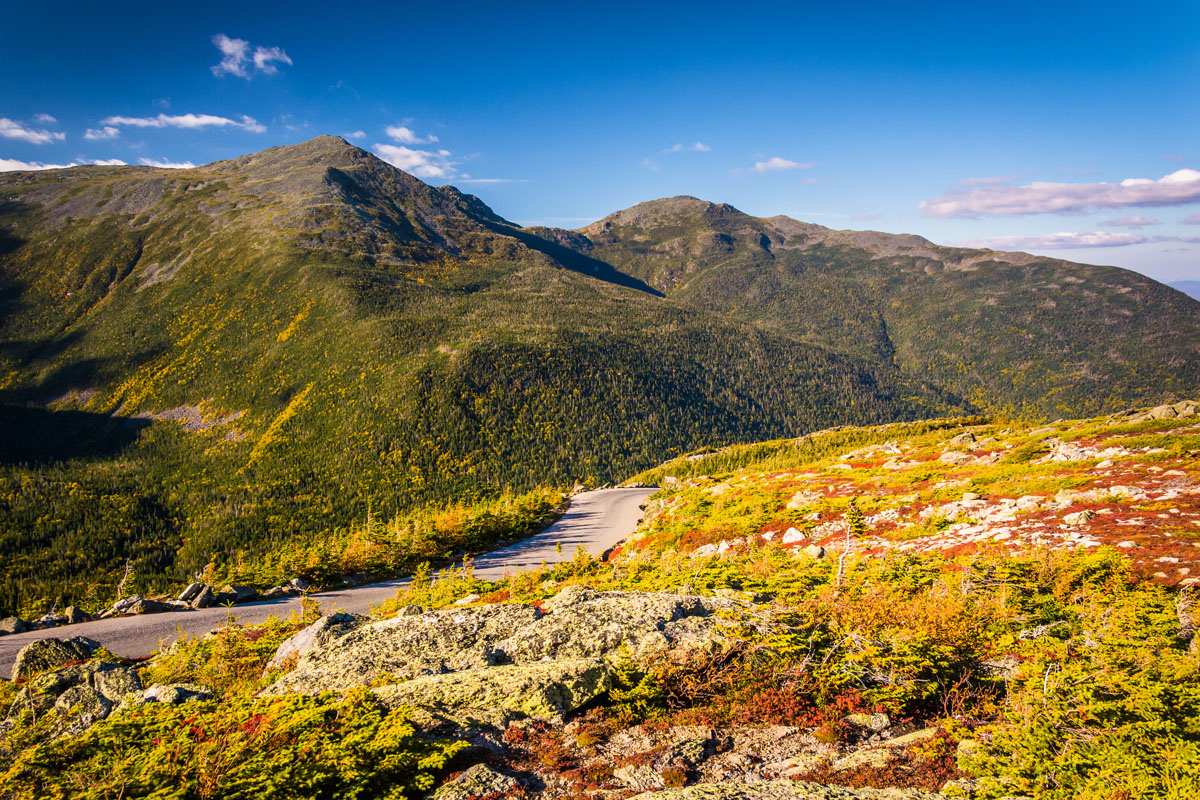 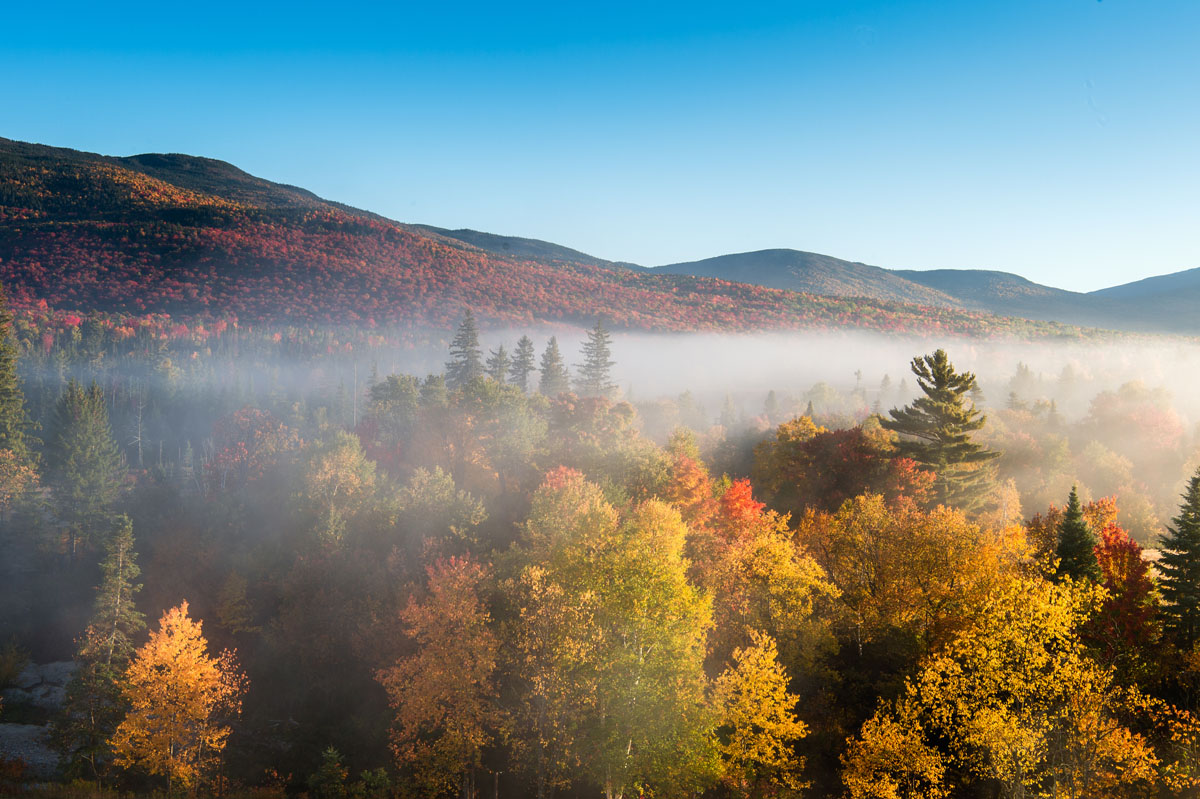 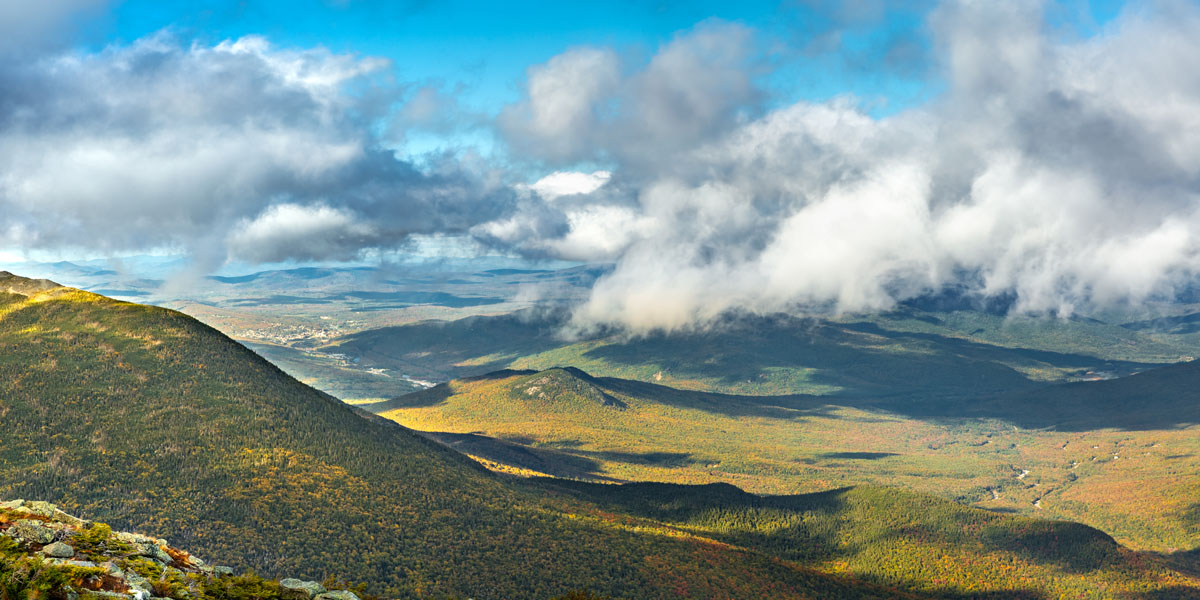 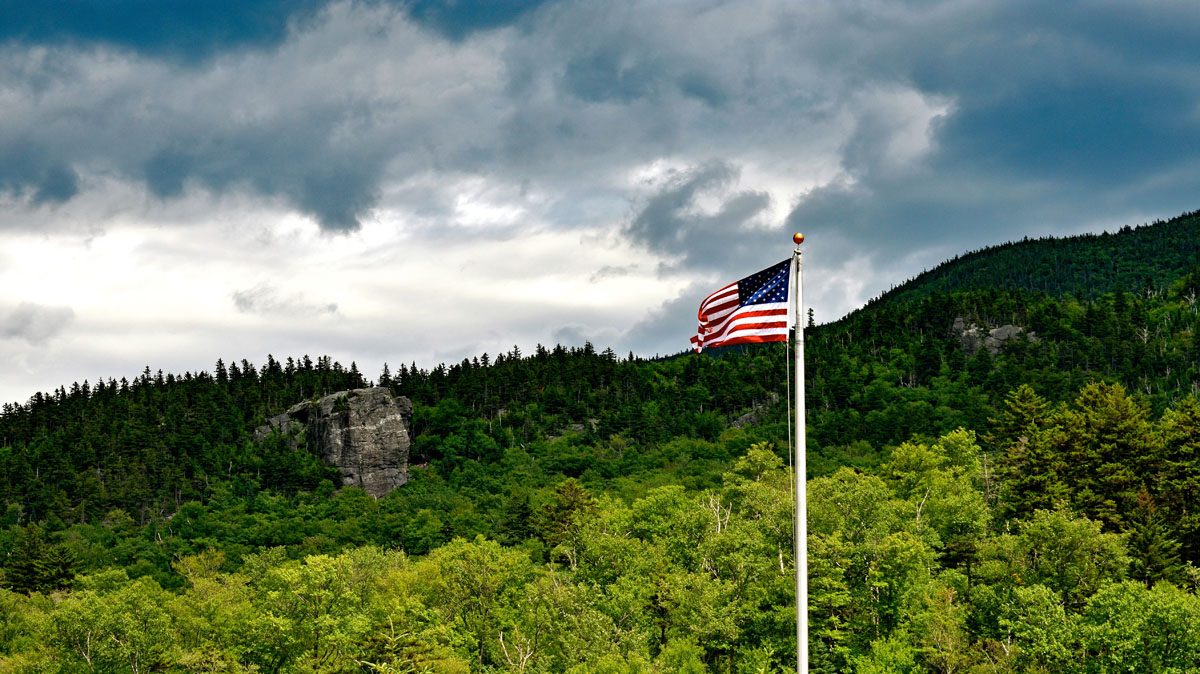 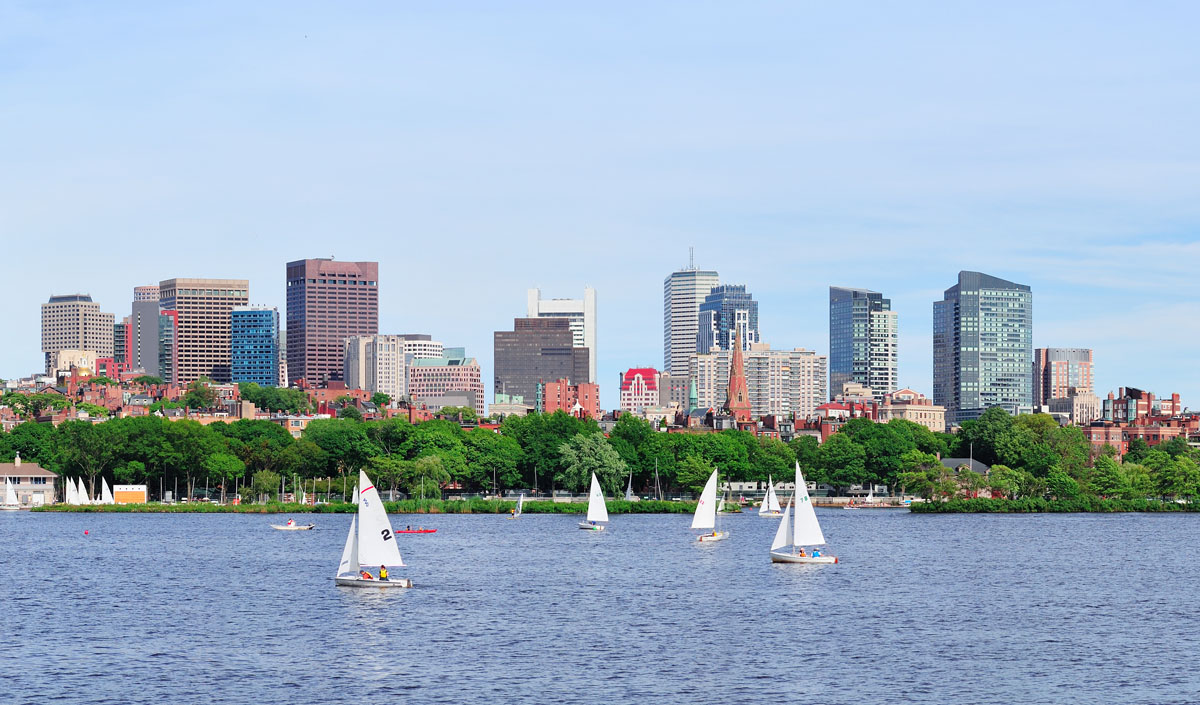 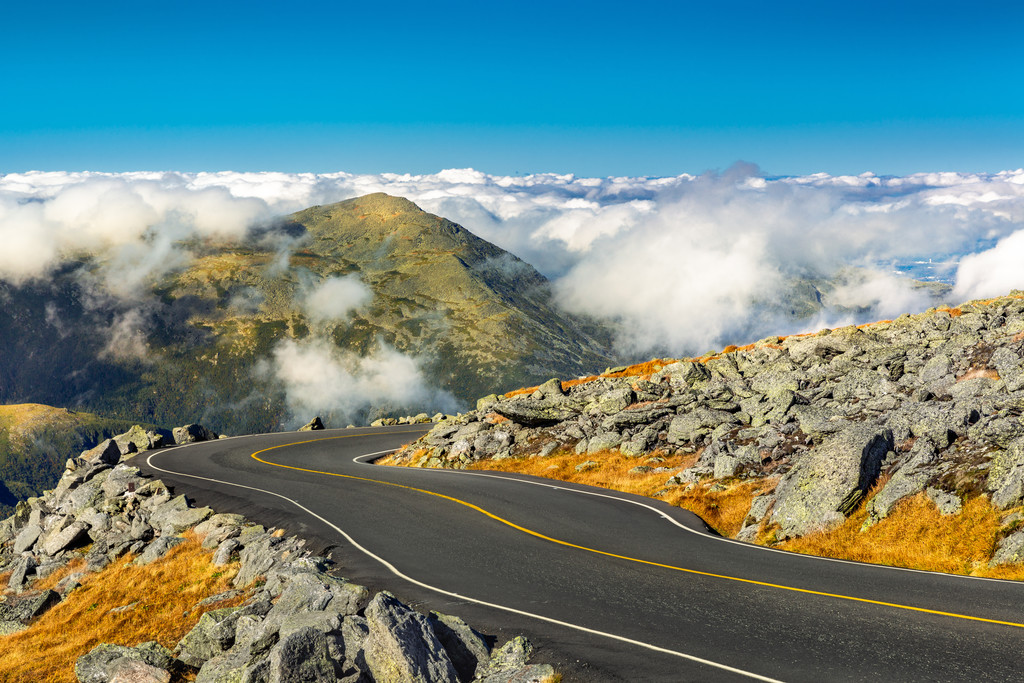 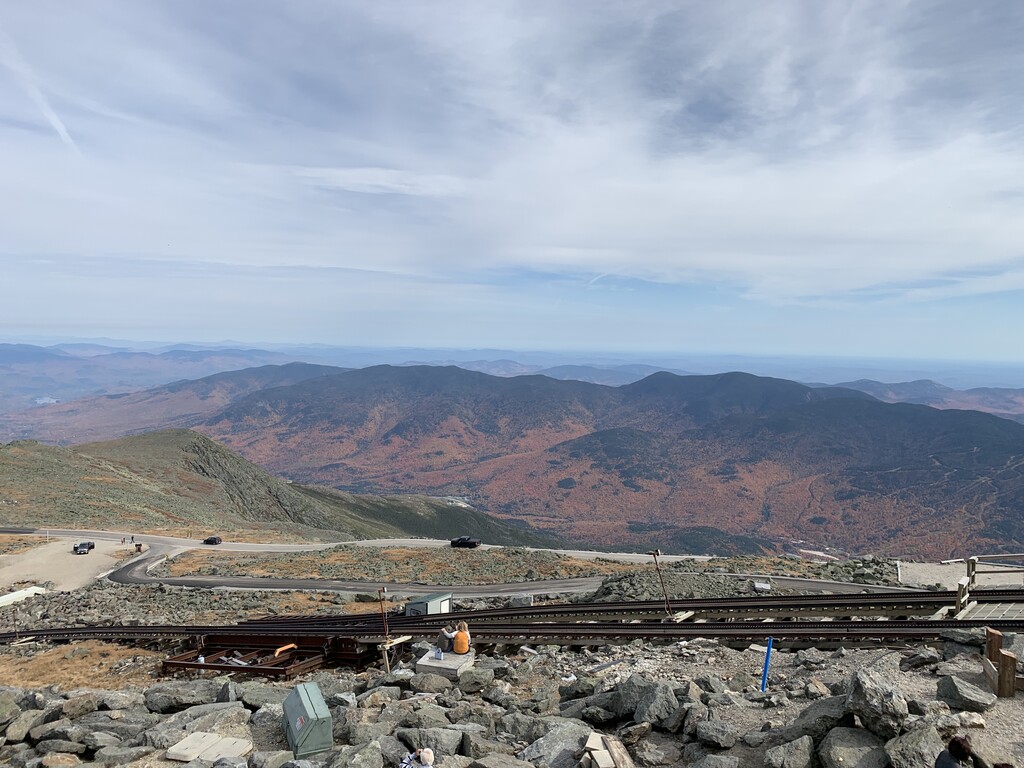