2 396 m
Elevation
Elevation is the altitude of a place
above sea level.

312 m
Prominence
Peak’s prominence is the least
vertical to be covered to get from the
summit to any other higher terrain.

Proportional Prominence 1 401 m
Location
48.979106 N  -121.648557 W
Mount Larrabee is a Skagit Range mountain situated 1.4 mile south of the Canada–United States border, in the North Cascades of Washington state. It is located immediately southeast of American Border Peak within the Mount Baker Wilderness, which is part of the Mount Baker-Snoqualmie National Forest, and near North Cascades National Park. It is notable for its reddish coloring caused by oxidation of Iron in the rock. The rock consists of reddish interbedded and interfolded phyllites and greenstone. Originally known as Red Mountain, the name was changed in 1951 to honor Charles F. Larrabee of the prominent Larrabee family of Bellingham, Washington.

Mount Larrabee can seen from the Mt. Baker Highway near Heather Meadows and Artist Point, as well as from points in the Fraser Valley in Canada. On Larrabee's east ridge are a series of jagged spires called The Pleiades. Larrabee's northwest ridge connects to American Border Peak. Precipitation runoff on the west side of the mountain drains into Tomyhoi Lake and Tomyhoi Creek, whereas the east side of the mountain drains to Silesia Creek. An unnamed glacier known colloquially as Larrabee Glacier lies below the steep north face. Downslope of that glacier is the Boundary Red Mountain Mine where gold was discovered in the early 1900s. The Gargett Mine was located on the southwest slope north of High Pass, but it didn't produce quality ore and was abandoned. 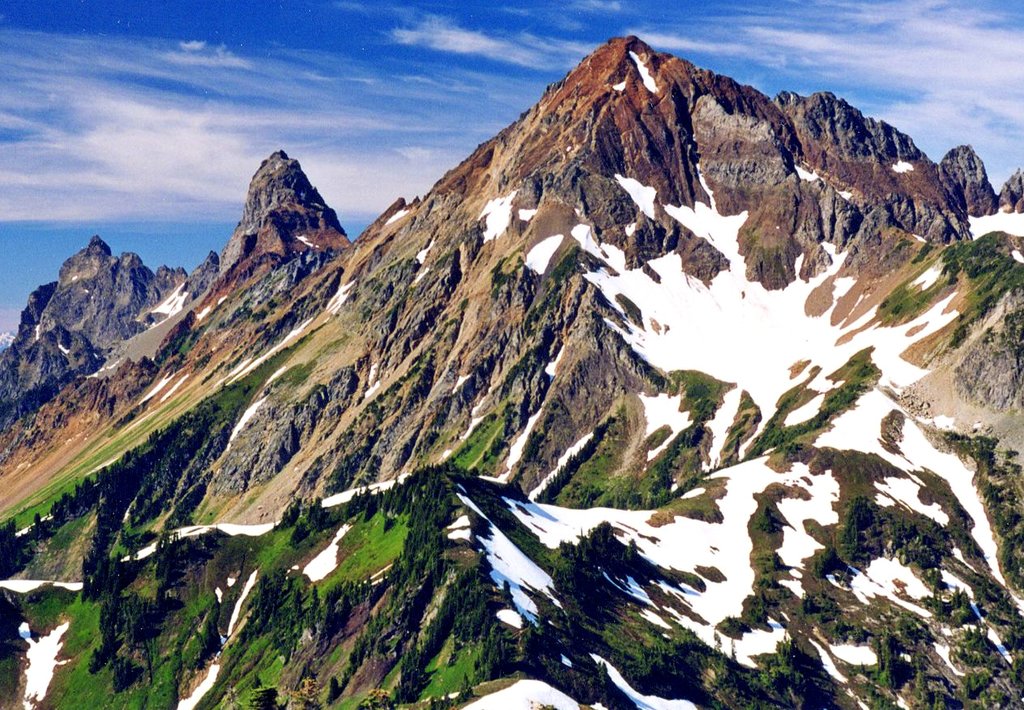 48.994167 N   -121.664444 W
Nearest Higher Neighbor
American Border Peak - 2.2 km NW
El: 2 438 m / Prom: 894 m
Check out a downloadable 3D model of Mount Larrabee area. A higher resolution model can be found in the PeakVisor mobile app.
Do you have photos of Mount Larrabee or know something about it? Please let us know!