Mercantour National Park is dominated by the peaks of the Maritime Alps. It is situated in the French administrative departments of Alpes-Maritimes and Alpes-de-Haute-Provence, both of which are in the region of Provence-Alpes-Côte d’Azur. The park also borders the Italian region of Piedmont.

Mercantour National Park received its national park status in 1979 and has been composed of the regulated central part (heart), and a peripheral membership area since 2006.

The core area of the park follows strict rules to protect its natural heritage, therefore there are very few permanent inhabitants and little human activity in the region. The peripheral area covers 1,365 sq. km (527 sq. mi) of terrain and it is home to around 18,000 residents in over 28 municipalities.

Noteworthy peaks in the Mercantour National Park are Cime du Gelas, which is the highest peak in the park’s heart at 3,143 m (10,311 ft), as well as Mont Bego at 2,872 m (9,423 ft), which is based in the Vallée des Merveilles and has around 37,000 petroglyphs dating back to the Bronze Age etched into its surface.

Mercantour National Park is characterized by its distinctly Alpine feel, despite its proximity to the Mediterranean Sea. The park is home to deep and narrow valleys with steep slopes, all of which are typical of the Maritime Alps.

The heart of the Argentero-Mercantour massif is composed of crystalline rock, with gneisses and granite forming the upper valleys. Sedimentary rock surrounds the borders of the massif, forming the ridges of the lower valleys.

In the Cians-Var Valley, you can find both the Daluis Gorge and Cians Gorge which are red-rock canyons, unique to Europe. Carved by the rivers Var and Cians, the 260 million year old sandstone gets its distinct color from oxidized iron.

The Haut Verdon valley is characterized by large ravine slopes, and is home to Lac d’Allos, Europe’s largest high elevation lake at 2,200 m (7,217 ft). The lake was formed by a glacier 20,000 years ago and is surrounded by towering sandstone and overlooked by Mont Pelat at 3,050 m (10,000 ft).

Glaciers and rivers have formed huge terraces in the Ubaye Valley over the millennia. The region features a contrasting landscape between the basin of Balconnette and its surrounding hanging valleys. This is incidentally also the sunniest valley in the area, with 300 days of sunshine and just 700 mm (28 in) of precipitation per year!

The Maritime Alps benefit from the influence of the Mediterranean during the summer and they feature a sunny, warm climate. Mercantour National Park has some of the richest biodiversity in the range too, as it is home to many rare and endemic species. This is thanks to its geological history and geographical positioning close to the Mediterranean Sea.

Mercantour National Park is rich in both flora and fauna, with around 2,700 plant species in the area and 8,744 different animal species calling the park home.

The Maritime Alps are known as an area of international floristic importance due to the variety and richness of its plant life. The park represents a meeting point of Mediterranean, Alpine, Arctic, and Eurasian plant species, and it is home to many rare and endemic species. The area is, in fact, arguably the main center of endemism in the entire Alpine chain.

Many endemic species are found on the subalpine and alpine levels of the crystalline Mercantour-Argentera massif. Some of the endemic species found here are Saxifraga florulenta, Silene cordifolia, Galium tente, and Saxifraga piedmont.

Beech woodlands are found in the lower valleys of the park alongside coniferous forests, which contain species such as larch, silver fir, spruce, and stone pine. There are also pastures at lower elevation, but there aren’t as many at higher elevations due to the rocky terrain that’s characteristic of the Maritime Alps.

Large mammals to spot in Mercantour National Park include chamois, roe deer, red deer, ibex, mouflon, and wild boar. Wolves are also present in the park. They repopulated the Southern Alps in the 1990s after reappearing close to Genoa in the northern Apennines. The wolves eventually made their way across the border into France.

Although you’re highly unlikely to spot wolves in the wild, you can observe three wolf packs from specially constructed hides at a wolf reserve located close to Saint Martin.

Mercantour National Park has a long history of human inhabitation. In fact, over 37,000 rock etchings have been found in the Vallée des Merveilles that date back to the Bronze Age.

Shepherds have tended their sheep here for centuries, and merchants, soldiers and traders have long trodden through the region’s valleys and along the contemporary French-Italian border.

Trade in the region centered around salt from the Mediterranean Sea that was brought from Nice along the old salt roads to Cuneo. The cultivation and trade of chestnuts was also the main source of income in the Maritime Alps for centuries.

The Mercantour-Argentera massif had long been subject to border conflicts over the centuries. Nowadays, there are plenty of remnants of past military activity in the region in the form of the many fortifications that were built along both the French and Italian sides of the border.

In recent years, Mercantour National Park has become a tourist hotspot. However, it is still a major area for agriculture and handicrafts. In particular, the region is known for its huge variety of cheese!

Mercantour National Park offers spectacular hiking opportunities, with 600 km (372 mi) of footpaths and 75 different trails available in the park for visitors to enjoy.

Within the park you’ll find an interesting mix of day hikes, multi-day routes, and even long-distance treks, such as the GR5, a 2,290 km (1,423 mi) route from the Netherlands to Nice.

Here’s a look at some of the longer hikes that travel through Mercantour National Park.

The Mercantour National Park is just a stone’s throw from Nice and the French Riviera. Therefore there are plenty of places to base yourself for a visit to the park. Here are some of the main cities close to the park to check out during your next trip.

Nice is situated along the French Riviera in the southeastern part of France just an hour’s drive from the Mercantour National Park. Now a bustling tourist spot during the summer months, Nice was also a very popular winter resort destination in Victorian England, with even Queen Victoria herself residing here during the winter months.

The Promenade des Anglais was built for the visiting English nobles and aristocrats in the nineteenth century so they could stroll along the road and enjoy the mild Mediterranean climate.

Follow in their footsteps and walk along by the sea while enjoying the beaches and the crystal clear waters of the Côte d'Azur, or take in some art by former residents Chagall, and Matisse at the Marc Chagall National Museum and the Matisse Museum.

The town of Menton is located on the French Riviera, close to the Italian border. It is known for its citrus industry, beautiful botanical gardens, beaches, and Belle Epoque villas.

While in Menton, be sure to walk around the maze of narrow streets in the old town, climb the steps up to the cathedral, take a dip in the sea, and enjoy its mild year-round sunshine.

Saint-Martin-Vésubie is a town located in the Alpes-Maritimes department in France. The small town is a great base for exploring the Mercantour National Park, and it offers beautiful hiking opportunities close to the Italian border such as the trek to the Lacs de Prals, a series of glacial lakes.

Saint-Martin-Vésubie is also located close to the Berthemont les Bains thermal spa and a wolf reserve. The town offers plenty of family-friendly summer activities nearby, such as horse riding, zip lining, climbing, and summer sledging. 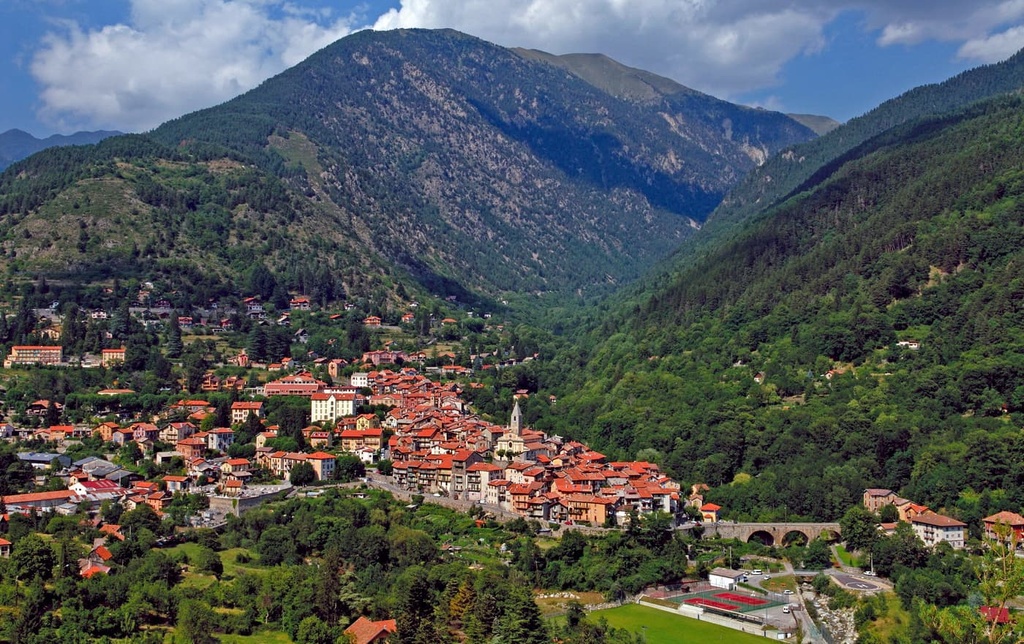 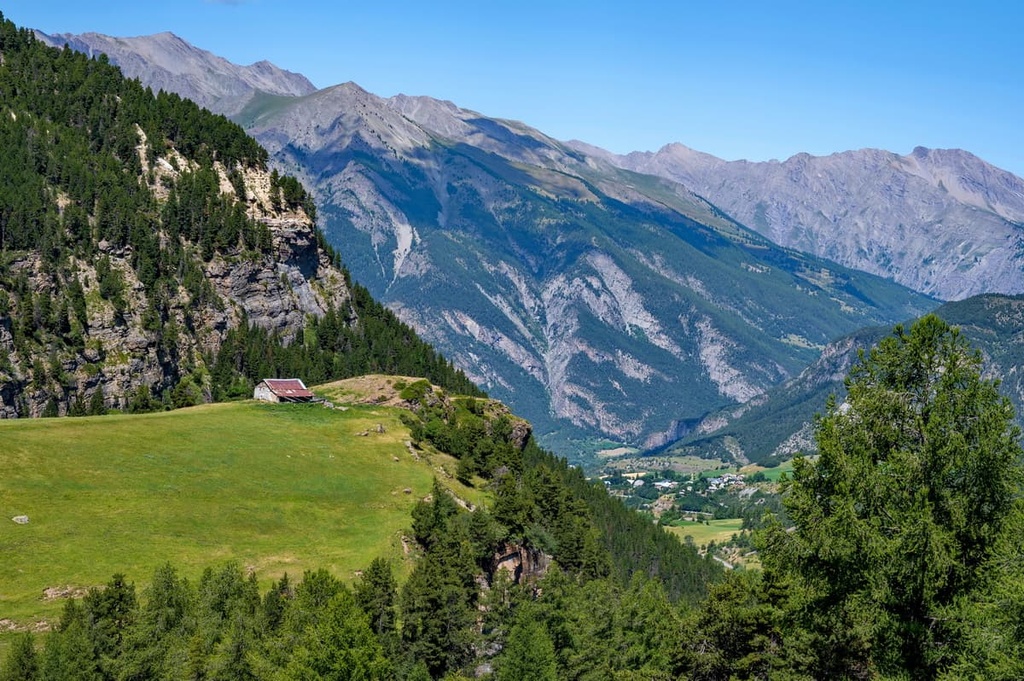 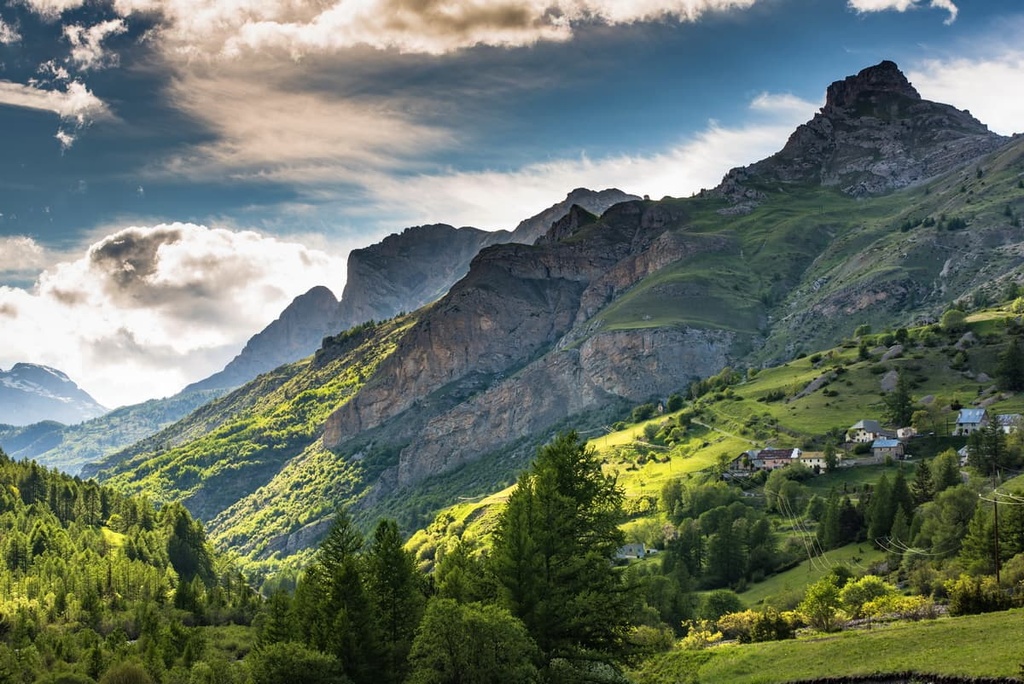 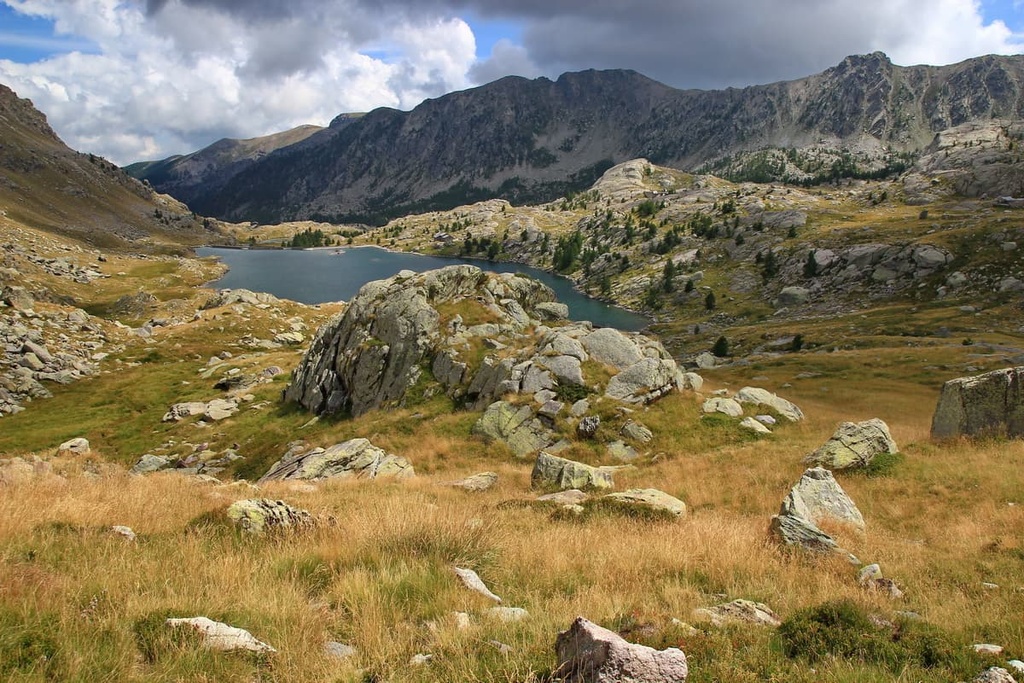 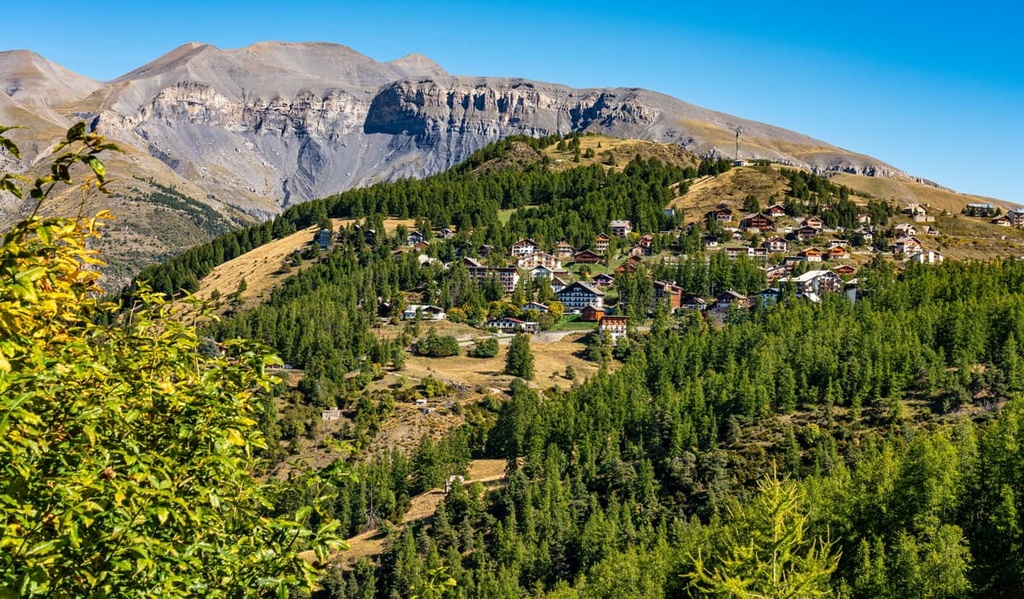 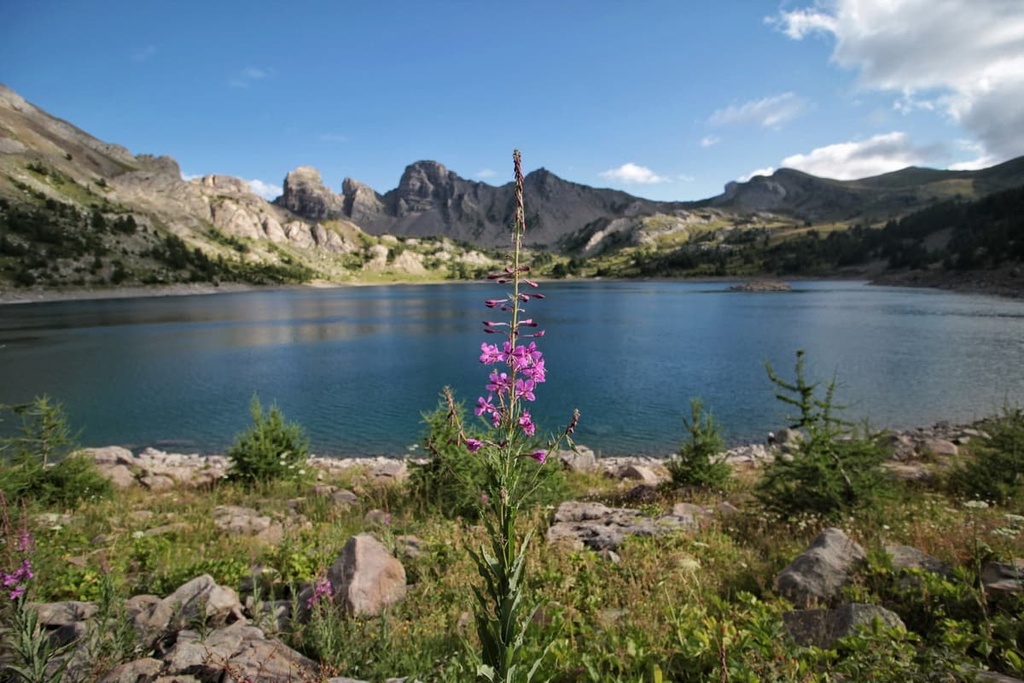 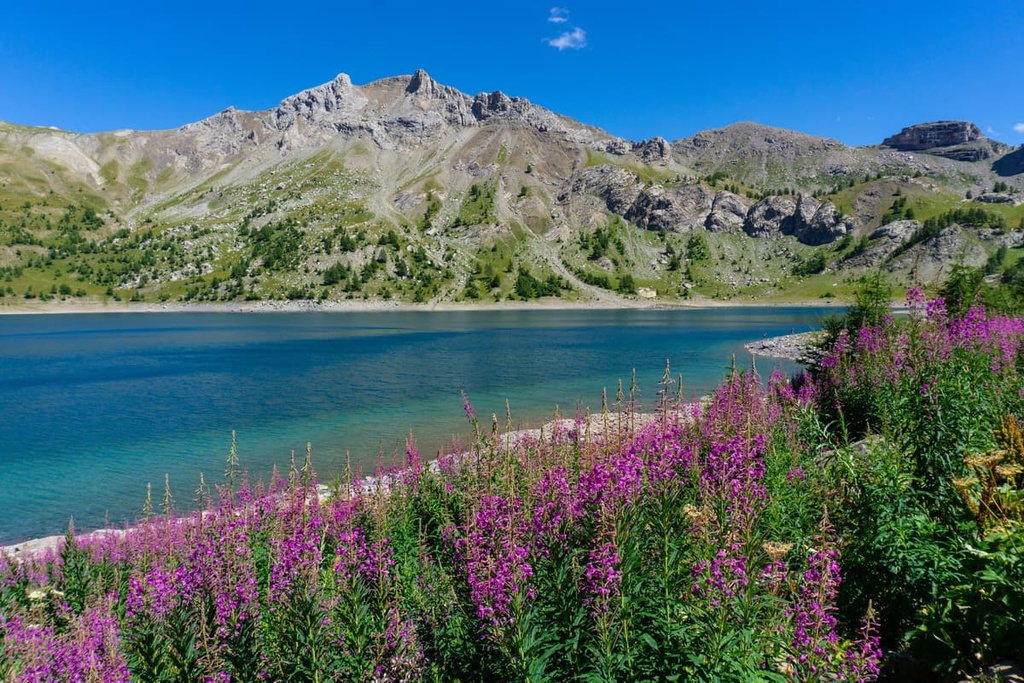