A land of significant cultural importance as well as superb hiking, rock climbing, fishing, camping, and hunting opportunities, Jemez National Recreation Area is a federally managed mountainous region located in the north-central part of the US state of New Mexico. The recreation area contains 15 named mountains, the highest and most prominent of which is Los Griegos (10,112 ft/3,082 m).

Jemez National Recreation Area is a federally managed outdoor recreation destination in the north-central part of the US state of New Mexico. The recreation area was originally established as a way to conserve the region’s important cultural, religious, ecological, and recreational resources.

The peaks in the Jemez National Recreation Area are predominantly part of the Jemez Mountains (Tsąmpiye'ip'įn), which is a subrange of the Colorado Plateau.

The Jemez Mountains are a group of ancient volcanic mountains that cover much of Los Alamos, Rio Arriba, and Sandoval counties in New Mexico. These peaks are located within the Rio Grande rift and they are believed to have last been volcanically active about 1.3 million years ago.

As a result of the range’s volcanic origins, much of the rock in the region is andensites, basalts, dactites, rhyolites, and tuffs, including ignimbrite.

The lowest elevations of the recreation area are mostly dominated by scrub and mixed piñon/juniper woodlands. Meanwhile, the mid-elevations in the region are home to vast stands of forests, most of which are coniferous with various intermixed stands of aspen. However, the timberline is quite high in the region so many of the peaks feature forested summits.

Wildlife is particularly abundant in the Jemez National Recreation Area and the Jemez Mountains as a whole. Typical mammal species include elk, prairie dogs, mountain lions, black bears, and beavers.

The land that is now part of the Jemez National Recreation Area has been inhabited by humans for thousands of years. This region is part of the traditional territory and ancestral homelands of the Pueblo of Jemez, whose ancestors have lived in the region since time immemorial.

The Pueblo of Jemez are currently located approximately 50 miles (80 km) to the northwest of the city of Albuquerque. There are currently more than 3,400 enrolled tribal members of the Jemez Pueblo many of whom live at Walatowa, the nation’s puebloan village located on State Route 4.

The ancestors of the contemporary Pueblo of Jemez migrated to the region of the Jemez Mountains sometime during the late thirteenth century. People of European descent first made contact with the Jemez Nation in 1541 when Spaniard Francisco Vázquez de Coronado’s expedition traveled through the region. At this time, the Jemez Nation was one of the largest and most powerful communities in the region.

A number of other Spanish expeditions followed Coronado’s path through the region. This includes the Chamuscado and Rodríguez Expedition, as well as the Espejo Expedition in the 1580s. After these expeditions, the Spanish sent conquistador Juan de Oñate y Salazar to colonize the region. Salazar was eventually banished from the region for his role in the Acoma Massacre in 1599 that saw the murders of approximately 1000 members of the Acoma Pueblo.

During the 1600s, the Spanish sent missionaries and Franciscan priests to the region in an attempt to convert the Jemez Pueblo and other tribal nations to Christianity. They established the mission church San José de los Jemez in the Jemez Mountains in 1621 but it was abandoned just a couple of decades later.

This attempted Christianization and continued violence in the region eventually led to the Pueblo Revolt in 1680. This revolt caused the Spanish to abandon their colony, but only for about a decade until Pedro Reneros de Posada reclaimed the region for Spain in the late 1680s, continuing a period of colonial rule that lasted until the 1800s.

After the Mexican-American War and the signing of the Treaty of Guadalupe Hidalgo, the region became part of the United States in 1848. In 1907, a post office was established in the village of Jemez Springs, which is located in the Jemez Mountains.

Although the recreation area is under the management of the US Forest Service, the management plan for the region requires that decisions be made about the land in collaboration with the Governor of the Pueblo of Jemez, particularly with respect to cultural and religious sites. As such, portions of the recreation area, particularly its many cultural and archaeological sites, may be closed at any time for traditional, cultural, and religious purposes.

Jemez National Recreation Area is home to a plethora of fantastic hiking opportunities. Here are some of the best trails to check out during your next trip to the area.

McCauley Hot Springs is one of the most popular day hikes in the region. The trek is approximately 3.6 miles (5.8 km) long round trip and it offers impeccable views of nearby Battleship Rock.

To access this trail, you’ll park at the Battleship Rock Day Use Area and follow the well-worn path that leads into the forest. This path will eventually lead to the hot springs, but you’ll first have to venture up a set of switchbacks. Once at the hot springs, you can sit back, relax, and take in the views.

Short but sweet, the Jemez Falls Trail is a quick jaunt to see one of the region’s most beautiful waterfalls. This hike is approximately 0.7 mi (1.1 km) round trip and has minimal elevation gain, making it a suitable choice for the whole family.

To access this trail, you can start either at the Jemez Falls Campground or from the East Fork Trailhead. Along the way, you’ll pass by a scenic overlook and a few small ponds before arriving at the falls, where you can enjoy a snack and splash around in the cool water during a hot day in the mountains.

Looking for a place to stay near Jemez National Recreation Area? Here are some of the best nearby cities, towns, and villages to check out:

Situated in the heart of the Jemez National Recreation Area, Jemez Springs is a small community of some 250 people with a long and storied history. Jemez Springs is located along the banks of the Jemez River and it’s believed that the region has been inhabited by humans for millennia. The Jemez Pueblo is also located just to the south of Jemez Springs.

The village is known for its plethora of hot springs as well as its status as a popular destination for spiritual retreats. It is also home to a number of popular restaurants and campgrounds, which makes it a great basecamp for a venture into the recreation area.

The village of San Ysidro is a community of approximately 200 people that’s located to the west of the Jemez National Recreation Area. It is situated at the junction of New Mexico State Road 4 and US Highway 550.

San Ysidro is one of the oldest Spanish-established communities in the state of New Mexico. It was founded as a farming community in 1699 and it was named for San Ysidro, the patron saint of farmers. The community contains a number of historic buildings and it hosts a San Ysidro Fiesta Day each year in May that’s worth checking out.

Situated to the northeast of the Jemez National Recreation Area, Los Alamos is a town of approximately 12,000 residents that’s located on the Pajarito Plateau. The town is perhaps best known as the site of the Manhattan Project and the Los Alamos National Laboratory.

These days, the Los Alamos National Laboratory remains one of the largest employers in the region. However, Los Alamos is also a good starting point for ventures into the Santa Fe National Forest.

The capital and fourth largest city in New Mexico, Santa Fe is a city of approximately 85,000 residents that’s located to the southeast of the Jemez National Recreation Area. Santa Fe was founded in 1610 and it served as the capital of the kingdom of Santa Fe de Nuevo México during the Spanish colonial era.

Santa Fe now has a reputation as being one of the most lively arts cities in the United States. The city contains dozens of galleries as well as plenty of other important cultural and historic sites that are worth visiting when you’re not in the mountains. 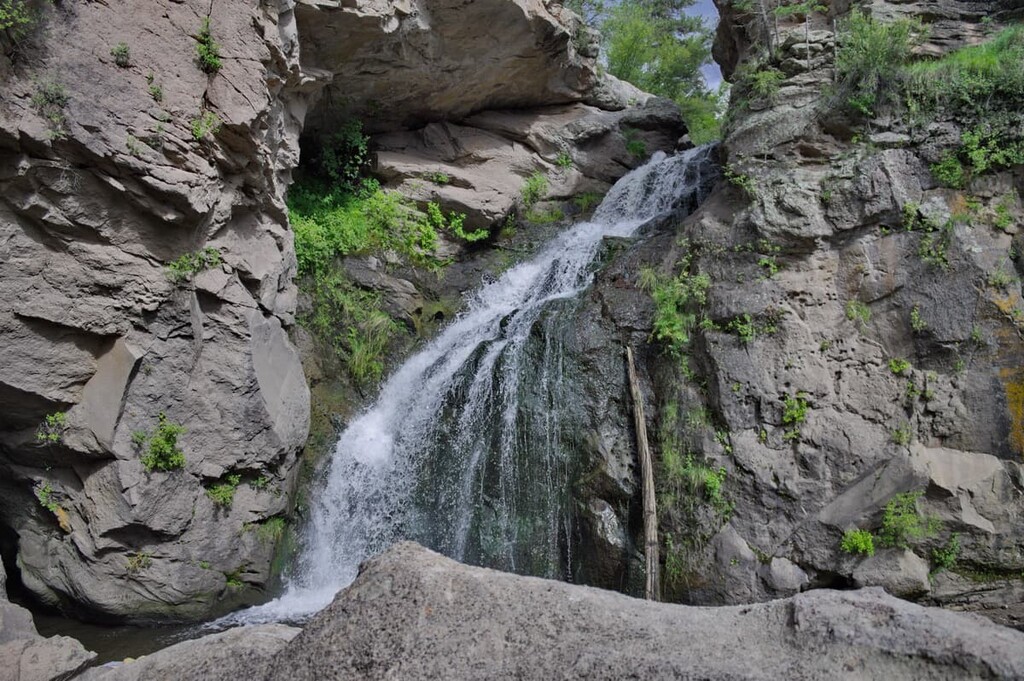 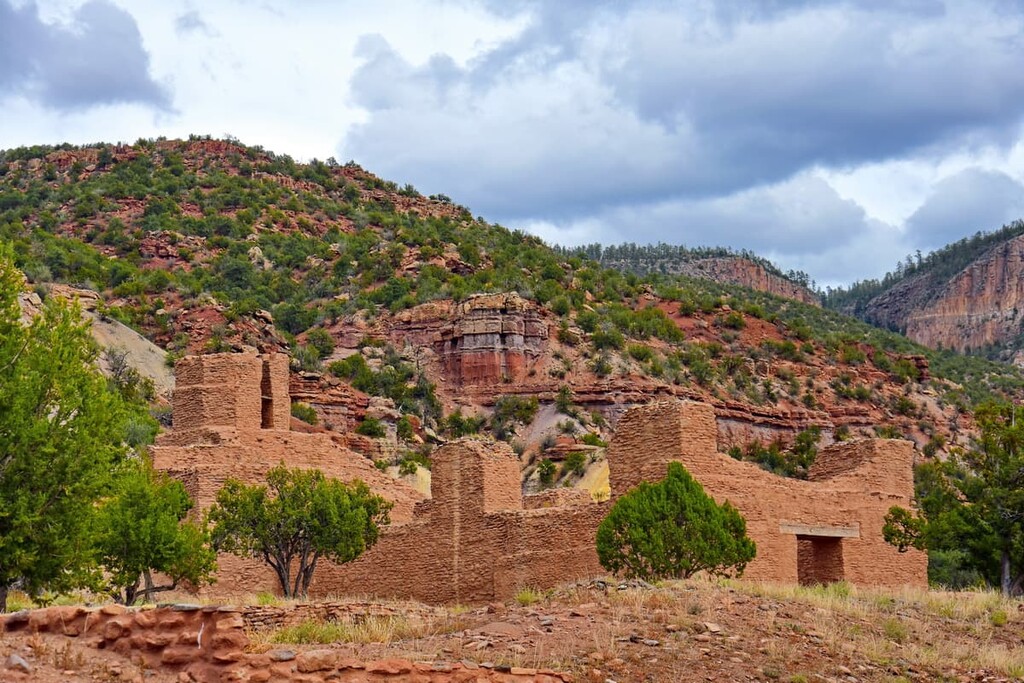 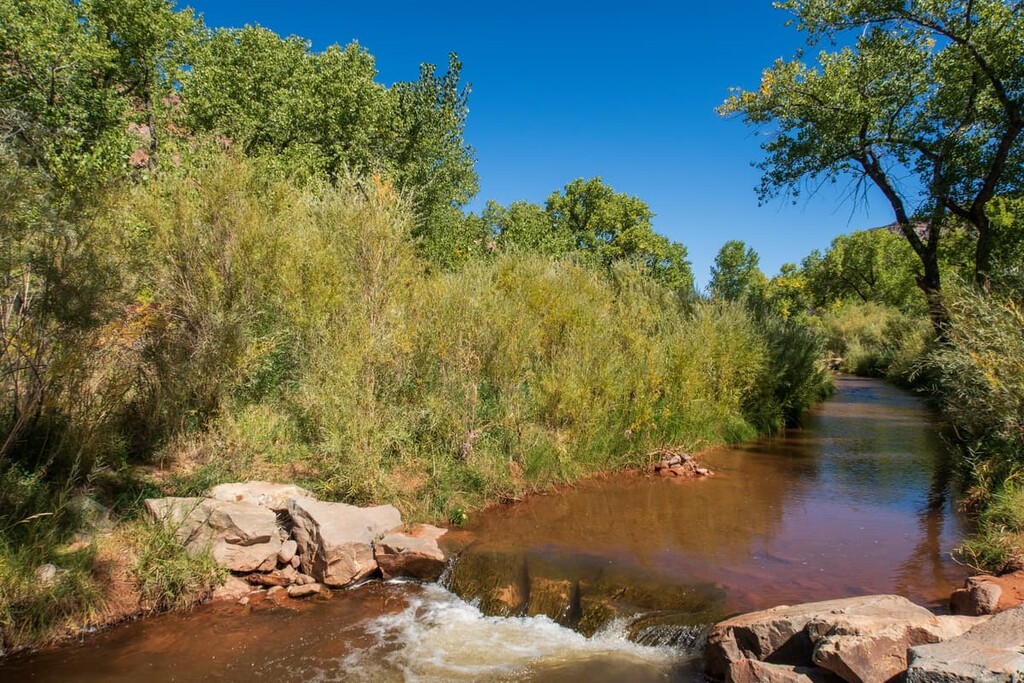 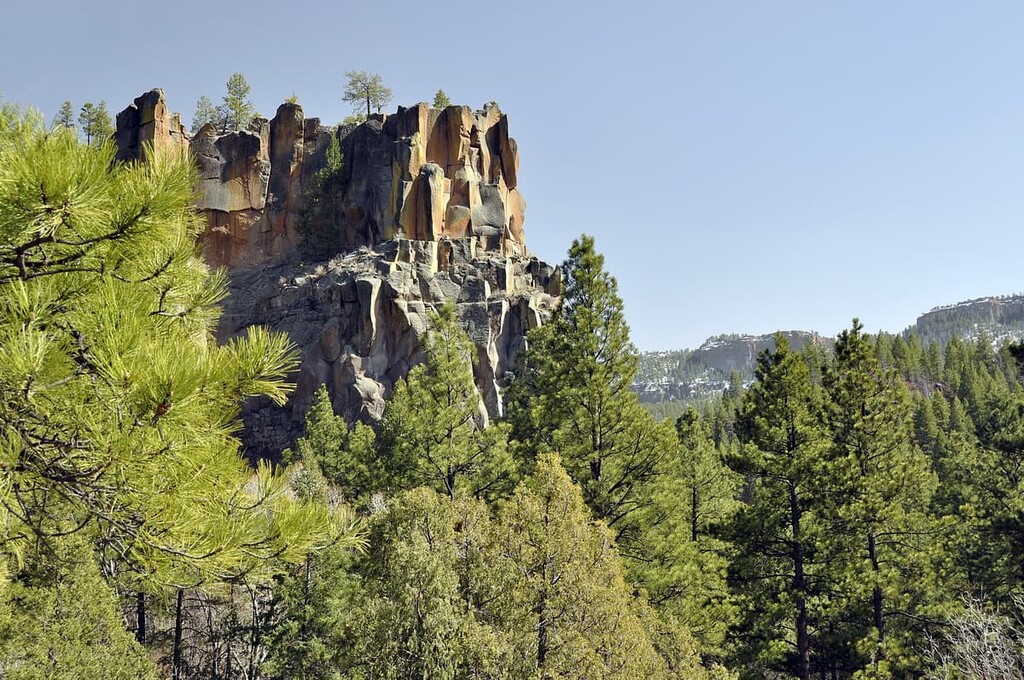 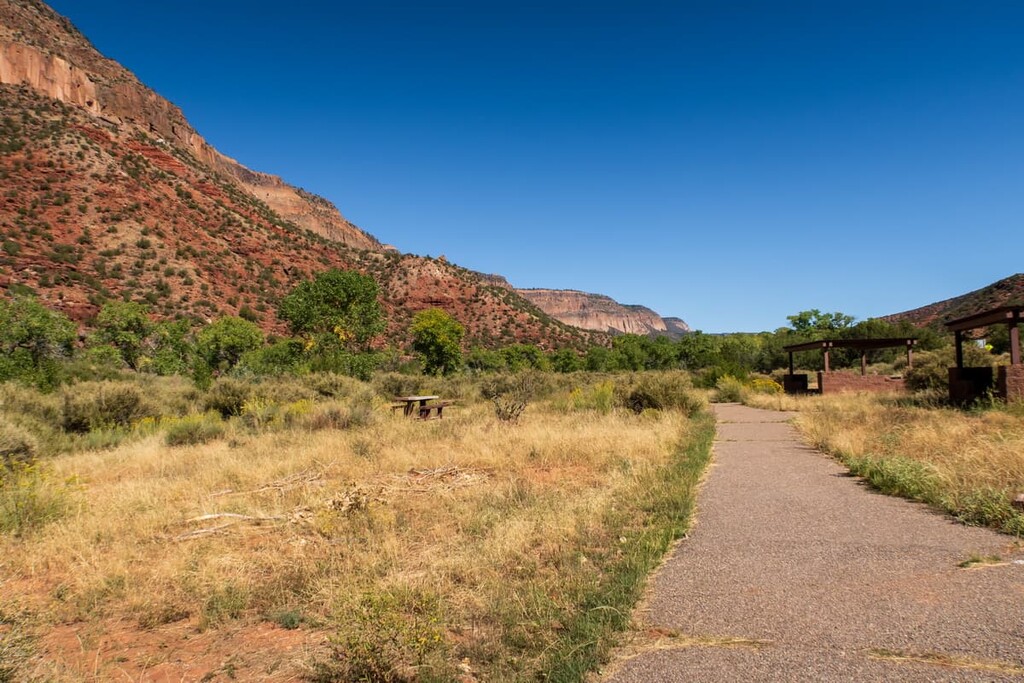 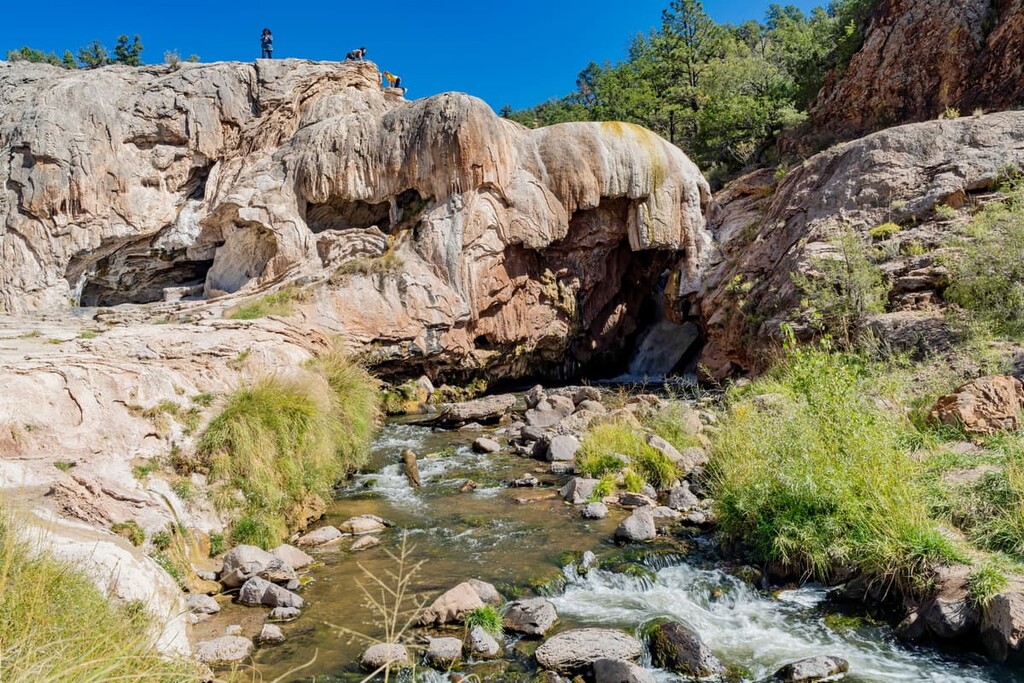 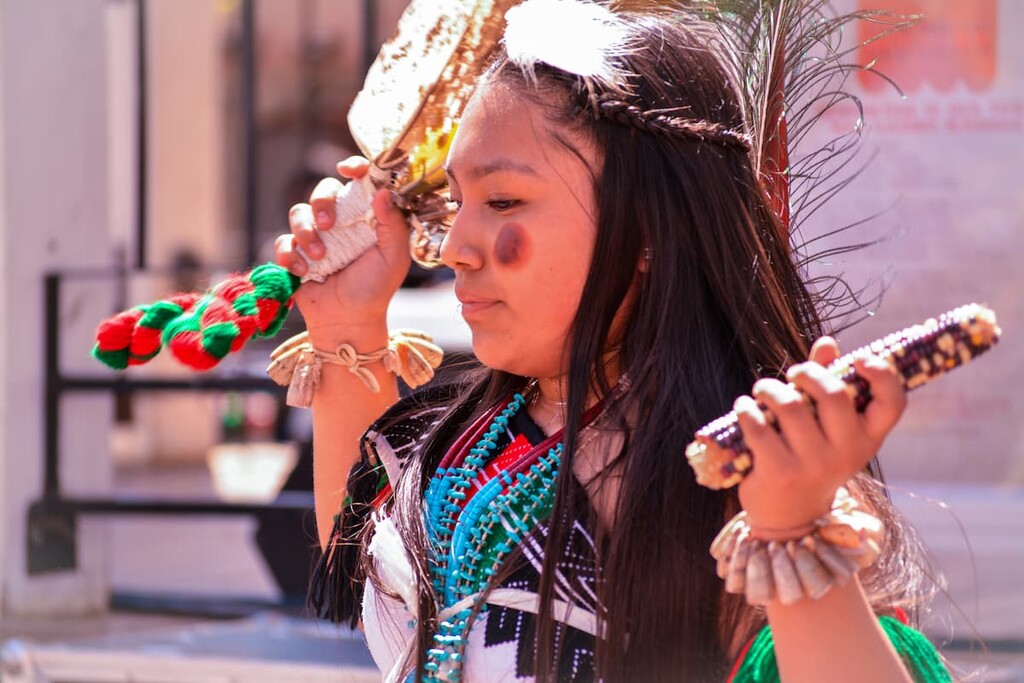