Located in the heart of the Hudson Valley, Bear Mountain State Park is a 5,200-acre state park rising from the western bank of the Hudson River. With five named peaks, the park’s most prominent attraction is Bear Mountain, a 1,289-foot hill with views of the Manhattan skyline some 40 miles to the south.

Along with the neighboring Harriman State Park, Bear Mountain and its peaks make up a subrange of the Appalachian Mountains known as the “Reading Prong.” The subrange extends from northern Pennsylvania to western Connecticut. Its stretch through southern New York is often referred to as the “Hudson Highlands.”

The rocks of the Hudson Highlands are among the oldest on earth, dating back dat least one billion years. The region is also home to a number of abandoned iron mine, which are often visible from the park’s many trails.

Park visitors can learn a lot more about the region’s geological makeup at the Trailside Museums and Zoo.

Five miles east of Interstate-87, Bear Mountain State Park is ideally situated for easy access from any direction. The park offers quick access from New York City and the US Military Academy at West Point, which is just nine miles upriver.

A host of other state parks dot the region around the park, including Schunemunk Mountain and Hudson Highlands State Parks to the north, and Harriman State Park to the southwest. Together with Harriman State Park, the park makes up one of the largest contiguous wilderness areas in the state of New York. (More than nine times the size of Bear Mountain State Park, Harriman is the second largest state park in New York.)

Bear Mountain may not be very high compared with other peaks on the Appalachian Trail, but its climb is far from breezy. With a 1,000-foot ascent in less than a mile of trail, the hike up Bear Mountain is often fairly steep. Those who reach the summit will appreciate the stone steps and walkways along the way, as well as the Perkins Memorial Tower, which offers stunning views of the entire park and, on a clear day, the skyscrapers of Manhattan.

Northeast of Bear Mountain is Hessian Lake, which offers boat rentals and trail access to Bear Mountain. Further north is Fort Montgomery State Historic Site, where visitors will find a 14-acre fortification that was used to assert control over the Hudson River during the Revolutionary War.

Bear Mountain State Park also includes the peaks of Dunderberg Mountain, Anthony’s Nose, Bald Mountain, and West Mountain, each with their own trails connecting the rest of the park.

Bear Mountain State Park offers a huge range of activities. In addition to some 40 miles of hiking, cycling, and cross-country skiing trails, there are play fields, picnic areas, lake and river fishing, a swimming pool, and the Trailside Museums and Zoo. There’s also an outdoor ice skating rink in winter, a Merry-Go-Round, and rustic lodging at various inns and cottages.

Bear Mountain is one of the most popular hiking destinations in the Hudson Valley regions. Among its 14 trails is the Appalachian Trail (AT), which extends from northern Georgia to northern Maine. The park marks the lowest point of the entire 2,200 mile trail, and was also the first section of the trail to be built in 1923. Visitors can access the Appalachian Trail by parking at the main lot near the Bear Mountain Inn off of Route 9W.

The park offers a number of hikes with varying difficult levels. One of the most popular hikes for visitors interested in a leisurely walk is the Hessian Lake Loop—a 1.5-mile paved path that loops around Hessian Lake. The much more strenuous 6.8-mile Bald Mountain Loop begins at the Cornell Mine Trail and takes hikers to the summit of Bald Mountain, with expansive views of the Hudson River Valley.

A typical hike for visitors interested in reaching the top of Bear Mountain is to begin at the Major Welch trailhead near the Bear Mountain Inn. The traill takes hikers to the summit and links up with the Appalachian Trail before descending via the 1777 West and Suffern Bear Mountain trails. The complete loop is roughly 3.9 miles.

Visitors can also reach Bear Mountain from the southwest via Route 6 or the Palisades Interstate Parkway. Park at the Anthony Wayne Recreation Area and take the Fawn Trail to link up with the AT before ascending to the summit.

Alternatively, hikers can take the Ramapo-Dunderberg Trail west to summit Dunderberg Mountain, which offers more stunning views of the valley and the southeast face of Bear Mountain. From the Ramapo-Dunderberg Trail, hikers can link up with the Timp-Torne trail, which connects to the AT as it heads north to Bear Mountain, eventually returning to the Fawn Trail and the Anthony Wayne Recreation Area.

Bear Mountain State Park offers a number of cabins and cottages for rental, but if you’d like to camp in the Hudson Highlands you should look to Harriman State Park, as there are no designated campsites.

For overnight amenities within the boundaries of the park, visitors can stay at Bear Mountain Inn, Overlook Lodge, or the Stone Cottages, all of which offer full hotel amenities and varying levels of privacy.

The Inn is easily reached from the park entrance—south of Hessian lake off U.S. Route 9W. It features deluxe guest rooms and suites, a restaurant, and easy access to everything the park offers.

With panoramic views of the Hudson River, the Overlook Lodge can be found just north of Hessian Lake. The Lodge is smaller and provides a more cozy overnight experience.

Finally, the Stone Cottages provides the rustic charm of a cabin without the fuss of renting and reserving one. Each cottage includes a front porch, a common living area with a wood-burning fireplace, a mini fridge, TV, and dry bar.

One of the most popular attractions at Bear Mountain State Park, the Trailside Museums And Zoo offer a chance to learn more about the park’s history, geology, and wildlife. There are four centers, all constructed from native granite.

The Herpetology House is a zoo with many native specimens of turtle, frog, toad, salamander, and fish. The Nature Study Museum includes specimens from the Museum of Natural History used for animal identification. The Geology Museum details the unique geology of the Hudson Highlands, including the industries that have tapped into it. And the History Museum details the history of human habitation in the Hudson River Valley, from early Native Americans to European settlers. 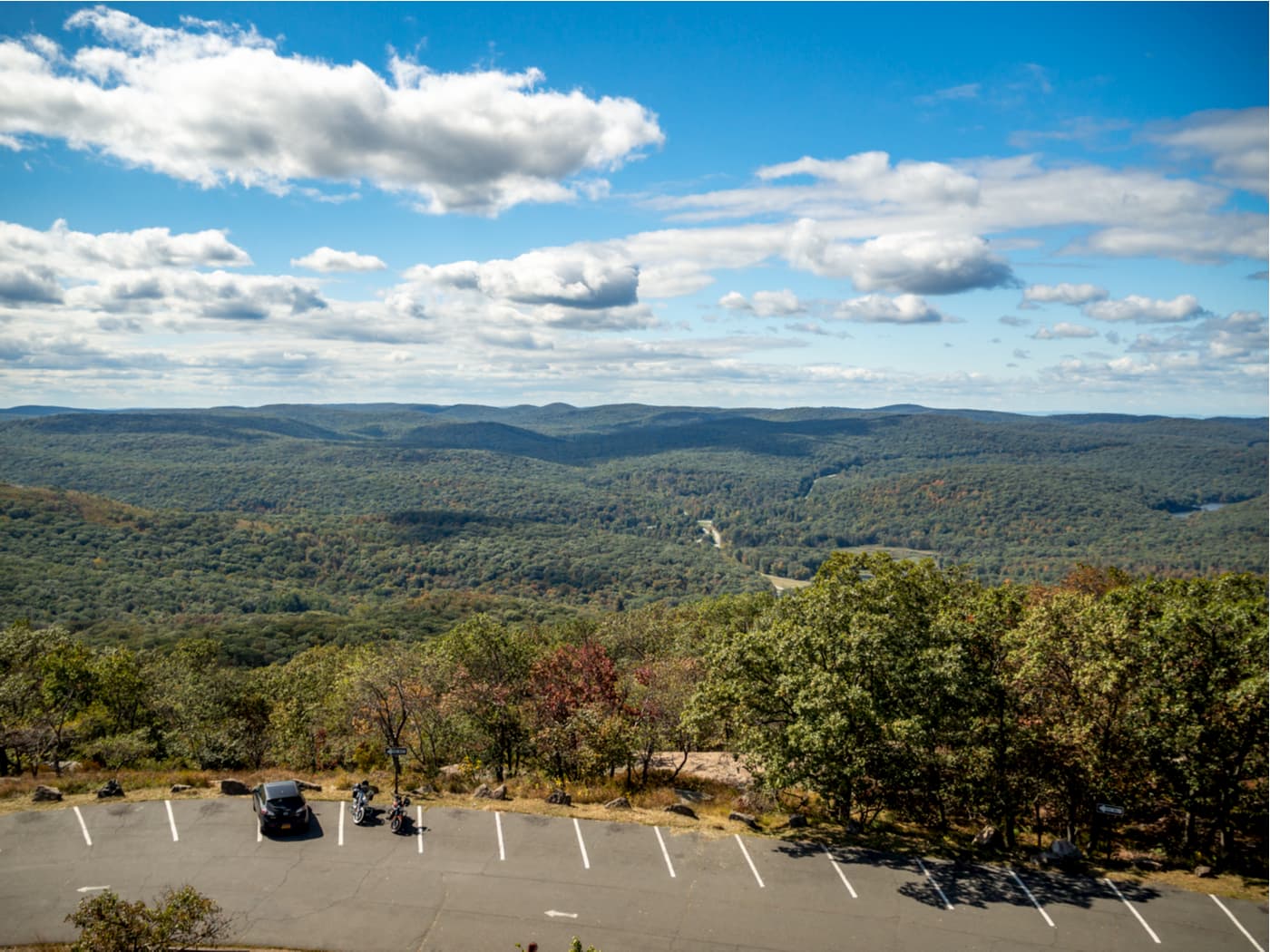 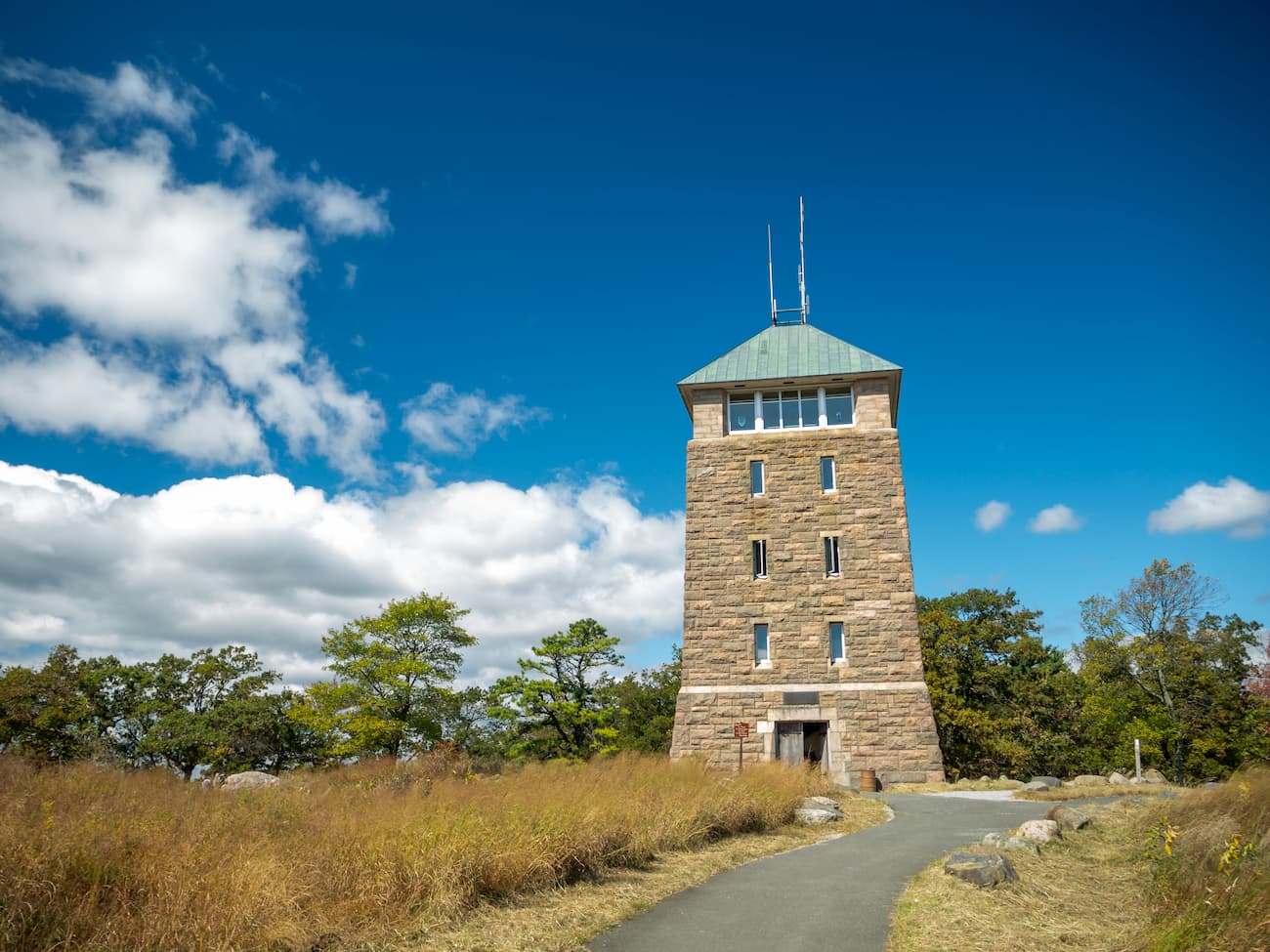 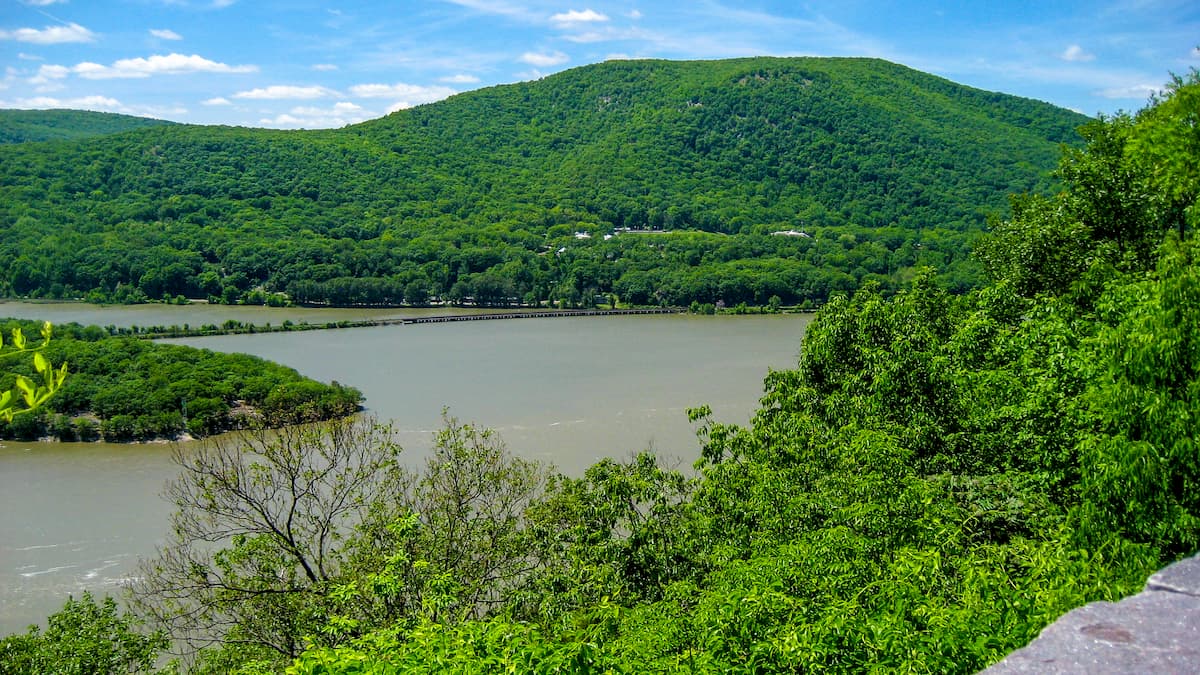 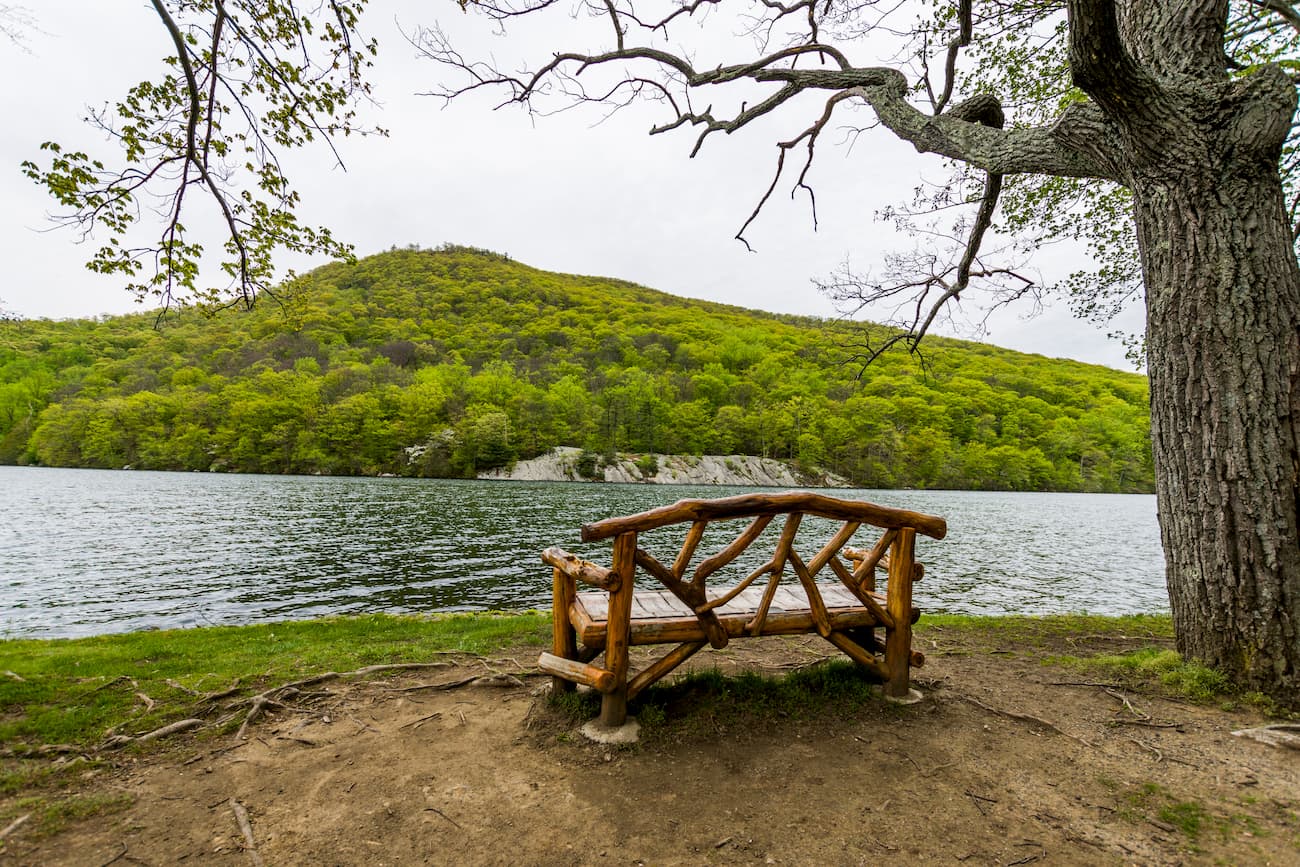 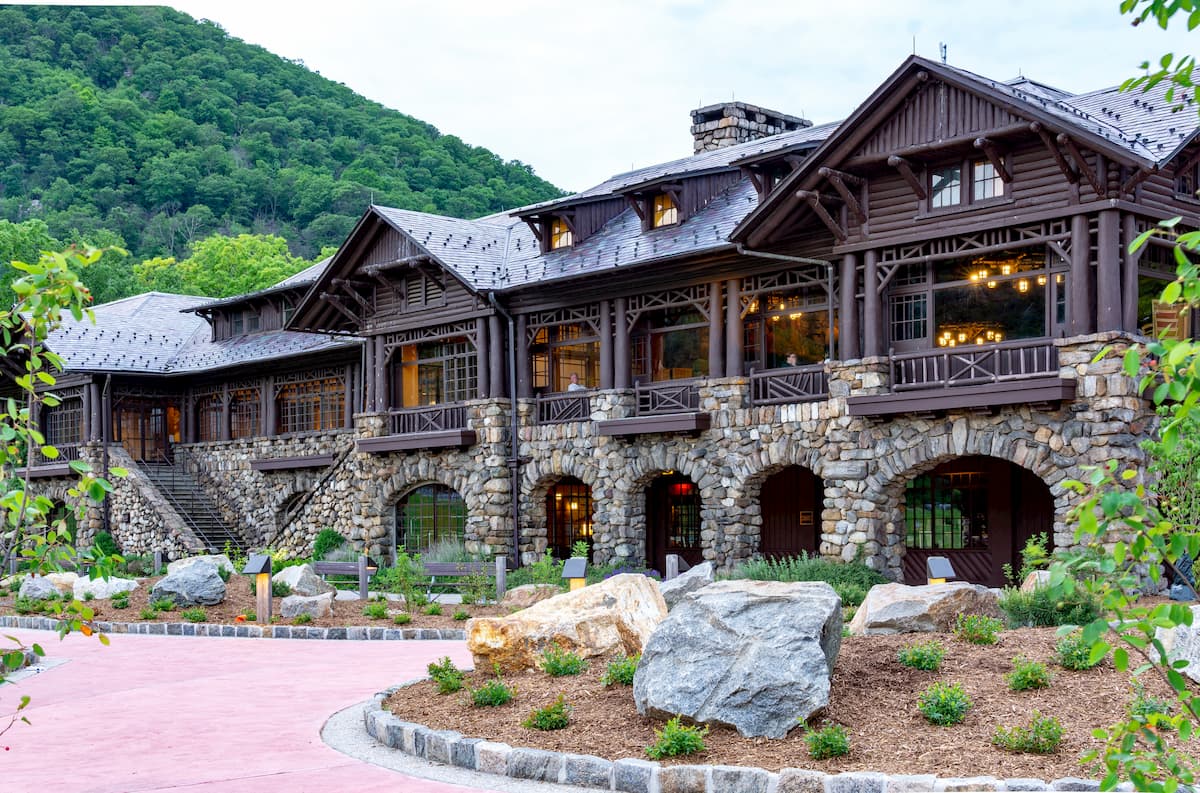