Geneva (Genève) is the westernmost canton in Switzerland. Despite being one of the smallest cantons in the country by area, Geneva is the sixth most populous canton in Switzerland. There are 3 named peaks in the canton. Signal de Bernex is the tallest and most prominent peak in Geneva at 510 m (1,673 ft) in elevation and with 65 m (213 ft) of prominence.

Geneva is flattest canton in all of Switzerland. Elevations in Geneva only range from 184 m (604 ft) from its lowest point along the Rhone up to 510 m (1,673 ft) in elevation at its highest point, Signal de Bernex.

Home to the westernmost portion of the country, Geneva only borders one other canton, Vaud, which is located to the north. Other parts of the canton are bordered by Lake Geneva, along with the French departments of Ain to the west and Haute Savoie to the east and south.

Nearly 95 percent of Geneva's borders are shared with France and the remaining portion is shared with Vaud. Geneva encompasses 282 square km (109 square miles) of the Genevean basin.

The Rhone and Arve are the two major rivers that traverse this flat canton. The Rhone flows from Lake Geneva while the Arve has its headwaters near Mont Blanc.

The city of Geneva is centrally located within the canton, and it serves as a major transportation hub for the entire region. Despite its urban setting, the city of Geneva is surrounded by smaller towns and rural landscapes. The Mandement Valley is also located in the northwestern region of the canton.

The narrowest point of the canton measures just 2.1 km (1.3 miles) and is situated between Lake Geneva and France. Since this is the only portion of land connecting the canton to the rest of the country, it is used as a major transportation region. This small piece of land is home to a major railway, highway, the Geneva International Airport, electrical lines, a bicycle path, a gas pipeline, and an oil pipeline.

Geneva lies within the Molasse basin, which is a large area of relatively low lying terrain that’s situated just to the north of the Alps.

The rugged peaks of the Alps are situated just outside of the canton. They began forming during the Alpine orogeny. This major mountain building period occurred between 65 million and 2 million years ago, and it was responsible for the formation of both the Alps and the landscape within Geneva.

Before the Molasse basin was formed, the region was covered by a shallow sea, which was part of the ancient Tethys Ocean. The steep mountains of the Alps were formed as the European and Adriatic plates collided during the Paleogene period.

Recumbent folds and thrusting transformed the floor of the Tethys Ocean into the rugged Alps. During the Eocene epoch, approximately 55 to 34 million years ago, a trench also began forming in the Molasse basin.

During this time, massive quantities of sediment eroded from the mountains as they formed, filling in the basin in the process. However, the Jura Mountains, which are located on the northwestern side of the canton, were later formed by a series of thrust faults.

As the shallow sea retreated, the Molasse basin and Swiss Plateau were thrust upward, creating the relatively flat terrain that’s found throughout the central band of Switzerland to this day.

Common rock types found in the region include slates, sandstones, conglomerates, and shales. Sequences of sedimentary rock, known as flysch, can also be found within the canton.

The rolling hills surrounding Lake Geneva create the ideal habitat for countless vineyards to flourish. However, the flora and fauna found in Geneva does not vary greatly throughout the canton, due to its small size and relatively flat topography.

Common tree species found throughout the region include oak, chestnut, and maple. The hillsides around the city of Geneva are home to silver fir, Norway spruce, European beech, larch, pine, and juniper trees.

There are also hundreds of species of flowers that can be seen throughout the canton during the warmer months of the year. Commonly sighted species of flowers and plants in Geneva include wood anemone, bindweed, common ivy, primrose, yarrow, red clover, common daisy, meadow sage, and monkey orchid.

The various waterways within the canton are home to numerous species of ducks along with mute swans and gray herons. Other common birds in Geneva include the carrion crow, house sparrow, black kite, and common buzzard.

The city of Geneva first appears in written history as a Gallic settlement. The Romans took control of the town and region in 121 BCE. In 58 BCE, Caesar demolished the Rhone bridge and built earthwork in an effort to keep out the Helvetii people.

In the decades that followed, Geneva began to flourish as an important Roman city, even following the fall of the empire. In 443 CE, the region was taken over by Burgundy and would later become part of the new Kingdom of Burgundy.

The city continued to grow throughout the Middle Ages due to its strategic location. By 1387, Geneva was granted a charter for communal self-government.

The Republic of Geneva was established in 1535, after centuries of the land being owned, bought, and conquered by numerous lords and rulers. The city even remained independent after the Duke of Savoy’s failed invasion attempt in 1602.

Throughout the mid 1600s, Geneva became a place of refuge for many persecuted Protestants. This influx of refugees brought many artisans to the region who would later establish Geneva as an international hub for cratsmanship.

Various philosophers and artists began settling in the region, too, adding to the prestige of Geneva. In 1815, Geneva joined the Swiss Confederation as the 22nd canton. The borders of the present canton were largely determined by the Congress of Vienna of 1814–1815.

Notable events that took place in the city of Geneva include the founding of the Red Cross in 1864 and the first convening of the League of Nations in 1920.

Today the canton is home to around 506,000 residents and is a world renowned financial center that’s home to various international organizations. It is occasionally referred to as the Capital of Peace.

Geneva is home to numerous trails for hiking and outdoor recreation. Here are some of the most popular trails and destinations in the canton:

The Presinge - L'Abbaye - Neyden hike is a popular loop trail that’s located within the canton. The trail winds its way through forests and fields while following along the Manson stream. The trail is 8.4 km (5.2 miles) long and it has 127 m (416 ft) of elevation gain.

The Vessy - L’Arve - Sierne route is a loop trail that’s located just to the south of the city of Geneva. This short route is 3.7 km (2.3 miles) in length and it has 73 m (239 ft) of elevation gain. It offers hikers excellent views of the Arve River.

Along the river, there are also numerous beaches where you can have a picnic and take in the surrounding scenery. Companies in the area also provide guided rafting trips down the river for those looking for a bit of adventure.

Le Nant-d'Avril is a short route situated to the west of the city of Geneva. This out-and-back trail follows along the banks of Nant-d’Avril before it connects to the Rhone.

A forested landscape surrounds much of the route, which also features a number of small waterfalls. The trail can also be extended by crossing the Rhone via a bridge. This trail is 6 km (3.7 miles) in length and it has 108 m (354 ft) of elevation gain.

Looking for a place to stay in Geneva? Here are some of the best cities and villages to check out in the canton:

Geneva is the capital city of the canton of Geneva, and it is home to over 200,000 residents. Situated on the southwestern tip of Lake Geneva, the city is centrally located within the canton.

Geneva is also the second most populous city within Switzerland. Known for its status as a global city, Geneva is home to the headquarters for the United Nations and various other international agencies.

Though the canton of Geneva is relatively small, the city is surrounded by outdoor recreation opportunities. The nearby Jura Mountains and Alps allow for exploring the outdoors throughout the year.

Some of the most popular sights near the city include the Reformation Wall, the International Museum of Reformation, the Jet d’Eau in the harbor of Lake Geneva, and CERN, among other attractions.

Geneva can act as a great starting point for exploring the landscape of western Switzerland and eastern France. If you’re visiting the city, it’s worth taking a tour with a local guide to learn more about Geneva’s rich history and distinct neighborhoods.

Versoix is a small municipality located within the canton of Geneva that’s situated along the northwestern shores of Lake Geneva. Home to around 14,000 residents, Versoix offers a quiet escape from the busy city of Geneva. The foothills of the Alps can be seen across the lake while the Jura Mountains lie just to the northwest of the municipality.

During the winter months, Versoix is a popular place to visit if you want to see the gorgeous ice sculptures that are placed along the banks of the lake. The famous Favarger chocolate making company headquarters is located in Versoix, too, and the company hosts a chocolate festival each year. 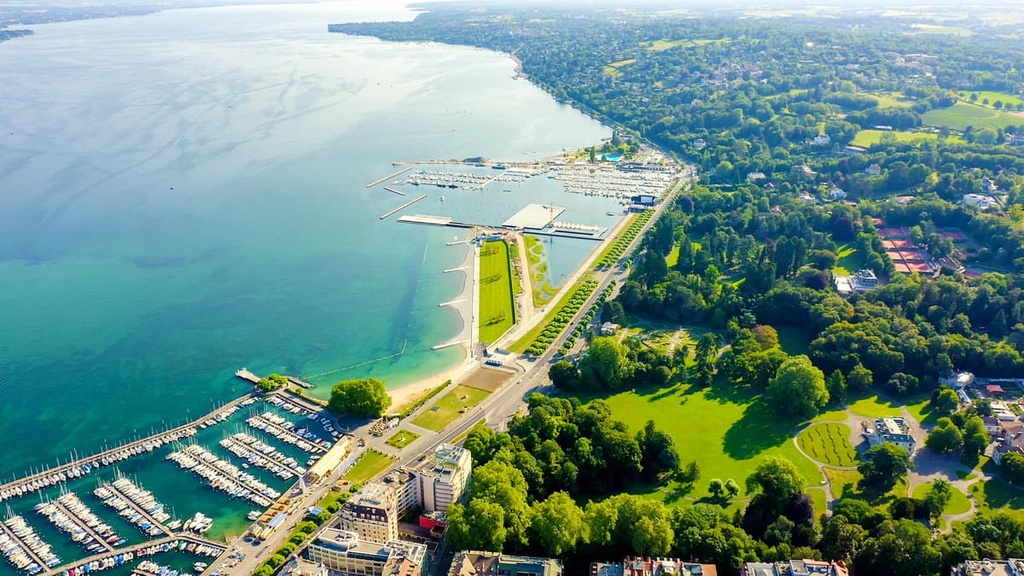 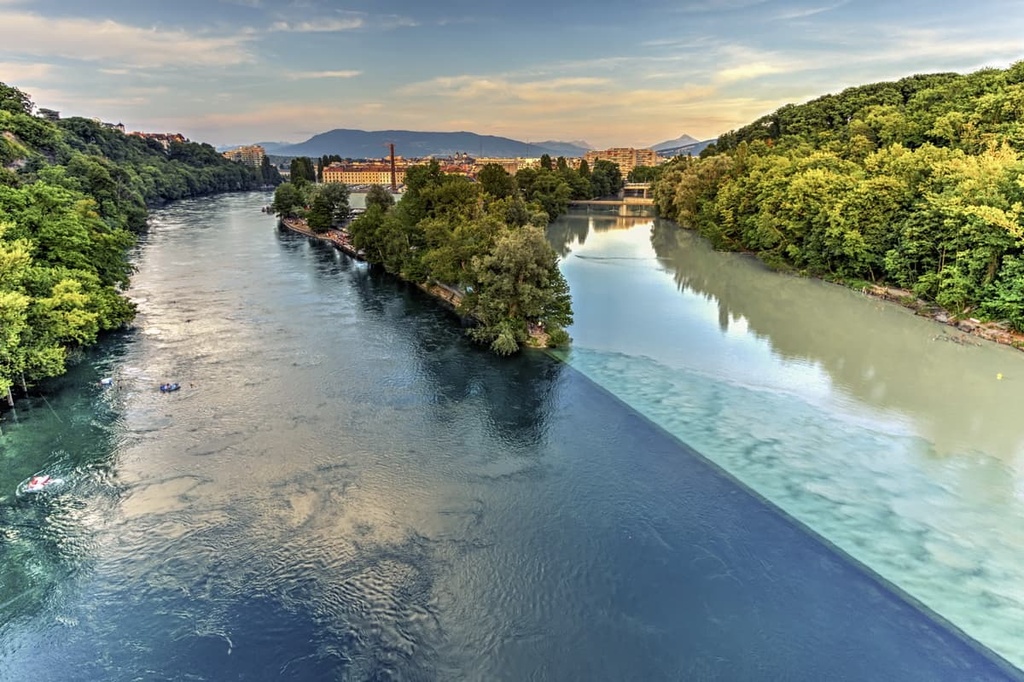 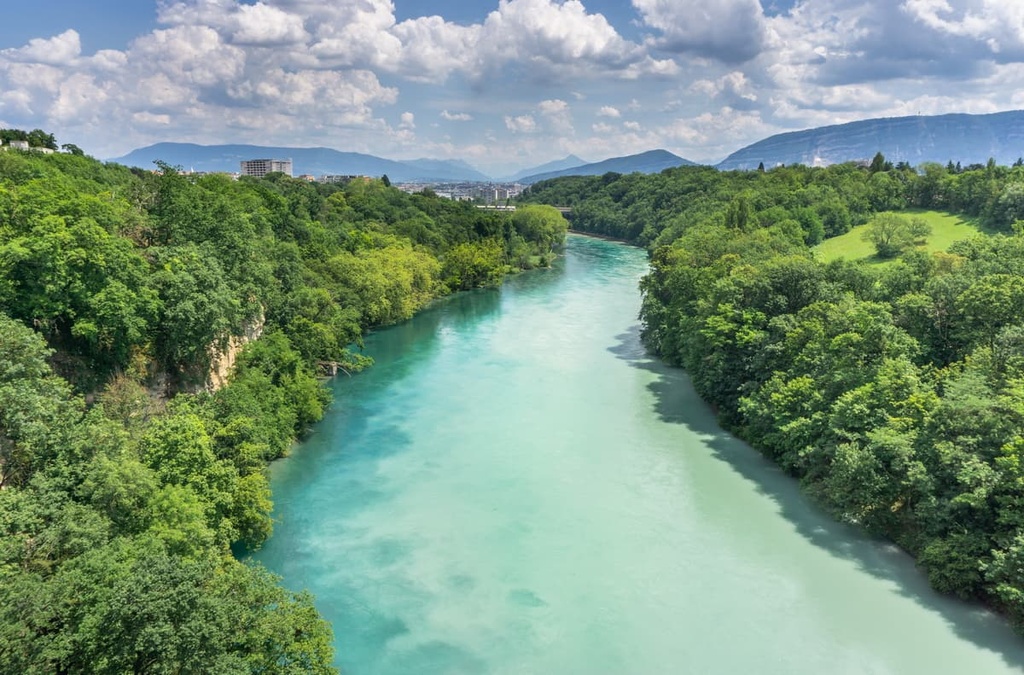 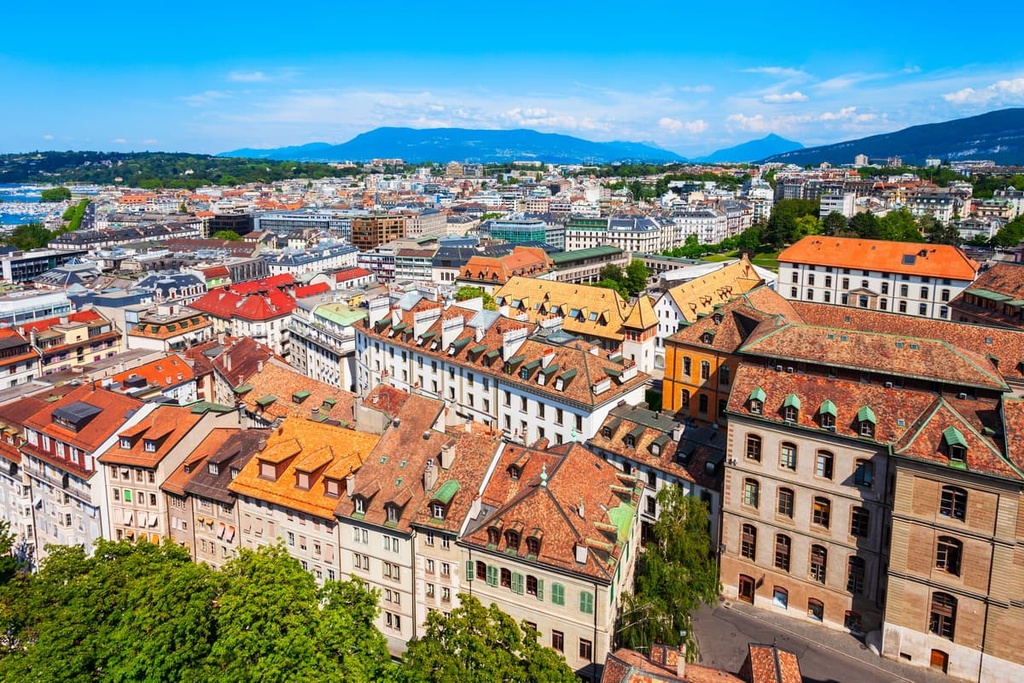 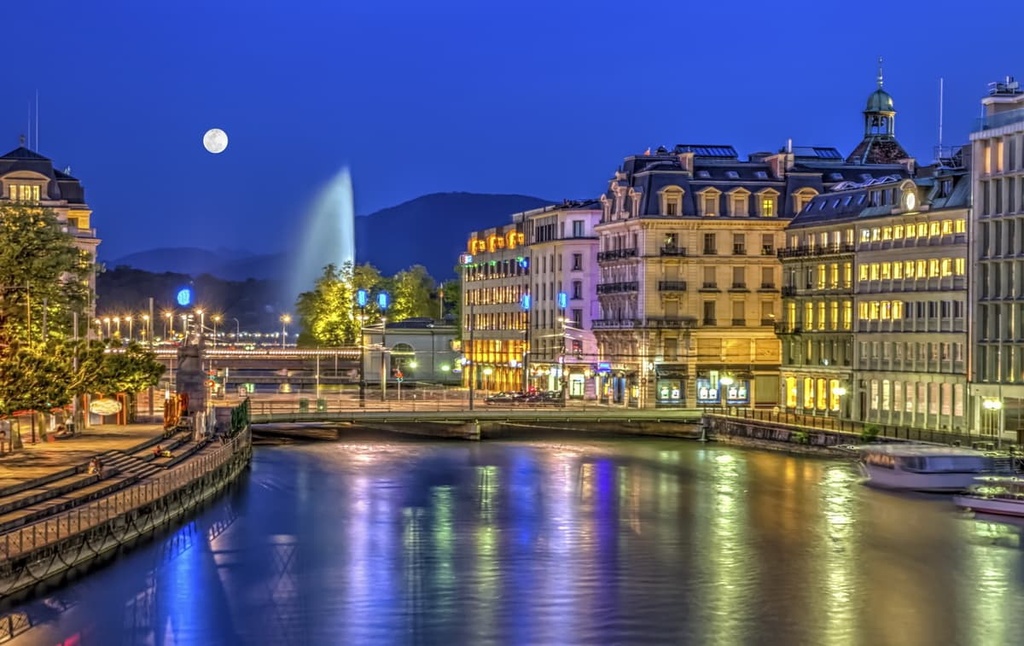