The Santa Catalina Mountains are a prominent mountain range situated in the southeastern part of the US state of Arizona. Their varied and rugged terrain make this region one of the most visited sites in all the Coronado National Forest. The range contains 59 named mountains. The tallest and most prominent peak is Mount Lemmon at 9,150 feet (2,789 m) tall with 5,167 feet (1,575 m) of prominence.

The Santa Catalina Mountains are situated in southeastern Arizona, just outside the city of Tucson. They cover land in both Pima and Pinal counties, framing the backdrop for the greater Tucson region.

Deep canyons and steep slopes define the range, while drastic changes in elevation allow for a variety of ecosystems to thrive. Lower elevations in the range features a rocky terrain interspersed with cacti.

As elevations increase, the Sonoran desert gives way to a more forested landscape. The highest peaks in the region are free of tree coverage, instead featuring low growing shrubs and rocky ridgelines.

Some of the deep canyons feature small creeks and streams such as Sabino Creek and Bear Creek. Rocky buttes are met with jagged peaks which offer hikers sweeping views of the surrounding mountains, the greater Tucson region and Coronado National Forest. The Pusch Ridge Wilderness lies in the southern half of the range.

The towering peaks are referred to as sky islands, which tower above the forest and desert landscape below. During the winter months, snow covers the higher elevations in the range giving way to some perennial alpine lakes during the summer months.

The Santa Catalina Mountains are part of the sky island mountain ranges which span across the Coronado National Forest and the surrounding desert. These various ranges have a unique geological history having been formed by both block faulting and volcanic activity.

Around 50 million years ago, the region experienced widespread volcanic activity as the North American plate was thrust over the Pacific plate. Over the course of millions of years, the Earth’s crust was thrust upwards.

This continual movement gave rise to the dramatic changes of elevation that are found throughout the Santa Catalina Mountains and the surrounding region. These peaks were further formed due to erosion from continual flash flooding.

These floods helped cut away the rock, leaving behind the deep canyons that define the region. Due to millions of years of erosion, the peaks visible today only showcase a portion of the original range, while the reset of the mountains has been buried beneath the sediment.

The dramatic topography of the region has enabled the Santa Catalina Mountains and surrounding Coronado National Forest to be full of biodiversity.

The lowest elevations feature a more desert landscape. Here the most common plant species is the saguaro cactus with low growing grasses and shrubs scattered throughout. Mid-elevations in the range feature a forested landscape with populations of mountain mahogany, pinyon pine, and juniper.

At elevations over 8,000 feet (2,438 m), the highest peaks and ridgelines in the range are dotted with aspen and fir trees. Amidst this flora lies the rocky ridgelines and buttes that are often free of plant life.

The surrounding network of protected regions allows for a variety of animal species to thrive in the range. Some of the larger mammals include mountain lions, deer, wolves, and black bears. While deer are common throughout the range, these other mammals are more likely to be spotted in less visited regions of the national forest.

The dry and desert landscape sections of the range are home to banded rock rattlesnakes, ornate box turtles, and bunchgrass lizards. Some of the common bird species in the region include the acorn woodpecker, Mexican jay, and sharp-shinned hawk. The Pusch Ridge Wilderness marks an important habitat for the threatened desert bighorn sheep.

The land surrounding the Santa Catalina Mountains has been inhabited by humans for thousands of years. Archaeological evidence suggests that humans have lived in the region for nearly 11,000 years. This landscape marks part of the ancestral homelands of the Mogollon, Sobaipuri, and Hohokam cultures, with remnants of these cultures still being found throughout the area.

The region is also part of the ancestral homelands of many peoples, including the Tohono O’Odham Nation, Chiricahua Apache Nation, and the Salt River Pima-Maricopa Indian Community, among many others.

The first recorded people of European descent to arrive in the region was in the seventeenth century. In 1700 the Mission San Xavier del Bac was founded by the Spanish missionary Eusebio Francisco near present-day Tucson.

By the end of the eighteenth century a military fort had been established in Tucson by the Spaniard Hugh O'Conor. The continual presence of Spanish forces led to numerous disputes and battles as the Indigenous peoples fought to protect their homelands.

Despite their continual efforts, the Indigenous peoples of the region were forced to leave by Spanish forces. Following the Mexican War for Independence, the region was declared as part of the state of Sonora by Mexico.

In 1848, the region was reallocated to the US following the end of the Mexican-American War. As mining became more popular, the population surrounding Tucson steadily began to rise. The growing mining industry contributed to the construction of the railroad in the area. This increased ease of access to the area, helped to establish Tucson as one of the largest commercial centers of the southwest.

Protection of the surrounding landscape began in 1902 when land purchased by the US government was declared as the Santa Rita Forest Reserve. In the years that followed the Mount Graham, Santa Catalina, and Chiricahua forest reserves were established, followed by the Dragoon National Forest, and the Tumacacori, Baboquivari, Peloncillo, and Huachuca forest reserves in 1906 and 1907.

These national forests and forest reserves were consolidated in 1953 to create the Coronado, Apache, and Tonto national forests. The Pusch Ridge Wilderness that lies in the range was established in 1978 following the Endangered American Wilderness Act, in order to protect the desert bighorn sheep.

The Santa Catalina Mountains are home to numerous trails and hiking opportunities. The vast majority of trails in the range lie within the Pusch Ridge Wilderness. Here are some of the top hiking spots to visit in the range:

This loop trail marks one of the most popular hiking trails in the region, offering some of the best views of the range. The route begins by climbing steadily through the forested landscape. After climbing the forest begins to thin as the trail passes along the summit of Marshall Peak. From the top of the peak hikers have sweeping views of the range and city of Tucson.

Hikers should note that this trail, along with other trails in the region, are located at an elevation about 7,500 feet (2,286 m) which can drastically add to the route’s difficulty. The shorter loop is 4.2 miles (6.8 km) roundtrip with 872 feet (266 m) of elevation gain.

The Pima Canyon Trail begins at an elevation below 3,000 feet (914 m). Hikers walk through the canyon while following along the path of the Pima Wash. Continual climbing allows hikers to witness the changing of landscape before their eyes from desert cactus to forested hillsides.

The canyon walls rise steeply on either side of the trail with rocky buttes and outcroppings scattered throughout. Round trip this out and back trail is 10.1 miles (16.3 km) and features 3,339 feet (1,018 m) of total elevation gain. Hikers have the option to extend the route another 2 miles (3.2 km) to reach the summit of Mount Kimball.

This hiking route lies along the southwestern edge of the range, within the Sabino Canyon Recreation Area. The hiking route begins relatively flat with Saguaro and Prickly Pear Cactus throughout. After climbing in elevation, hikers reach the Broadmoor Seven Falls.

The series of waterfalls also feature pristine pools at their base, creating an ideal spot to picnic and soak in the stunning high desert views. This out and back trail is 8.3 miles (13 km) in length and features 1,013 feet (309 m) of total elevation gain.

Looking for a place to stay near Santa Catalina Mountains? Here are some of the best cities and villages to check out in the region:

Oro Valley is a small suburb of Tucson, situated in the western foothills of the range. Home to 45,000 residents, the city offers easy access to the range and the rest of the Coronado National Forest. The city offers a calmer atmosphere outside of downtown Tucson.

Close proximity of the Pusch Ridge Wilderness has allowed Oro Valley to thrive as a destination for hiking, bird watching, biking, horseback riding and golfing. The downtown streets are lined with local shops, restaurants, and art galleries. Just a short drive from downtown Tucson, Oro Valley offers a calmer getaway for those exploring the region.

The city of Tucson lies a few miles south of the Santa Catalina Mountains. Tucson is the second most populous city in the state with a population of 550,000 residents. With a metropolitan population of over one million, Tucson is also home to the University of Arizona.

Despite the sprawling metropolitan area, Tucson is surrounded by national forests, national parks, and wilderness areas. The city boasts some of the best authentic Mexican food in the country amidst its thriving food scene.

Besides outdoor recreation, Tucson has attractions such as the DeGrazia Gallery in the Sun, Old Tucson, Colossal Cave Mountain Park, Tucson Museum of Art, and the Arizona-Sonora Desert Museum. Outside of the city lies the Kitt Peak National Observatory for viewing the dark night sky. 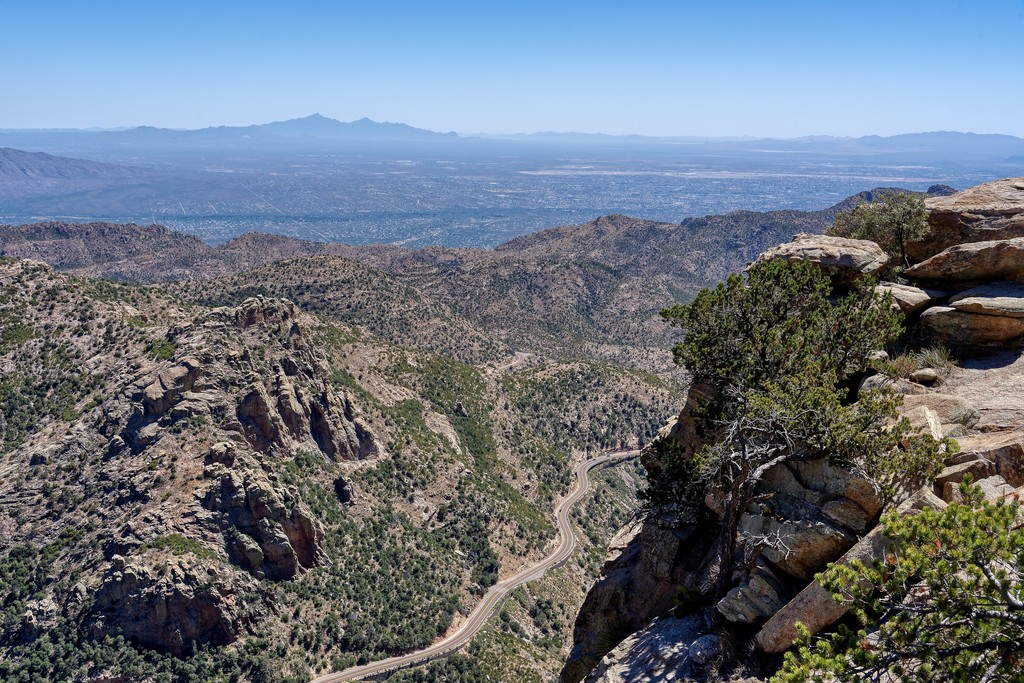 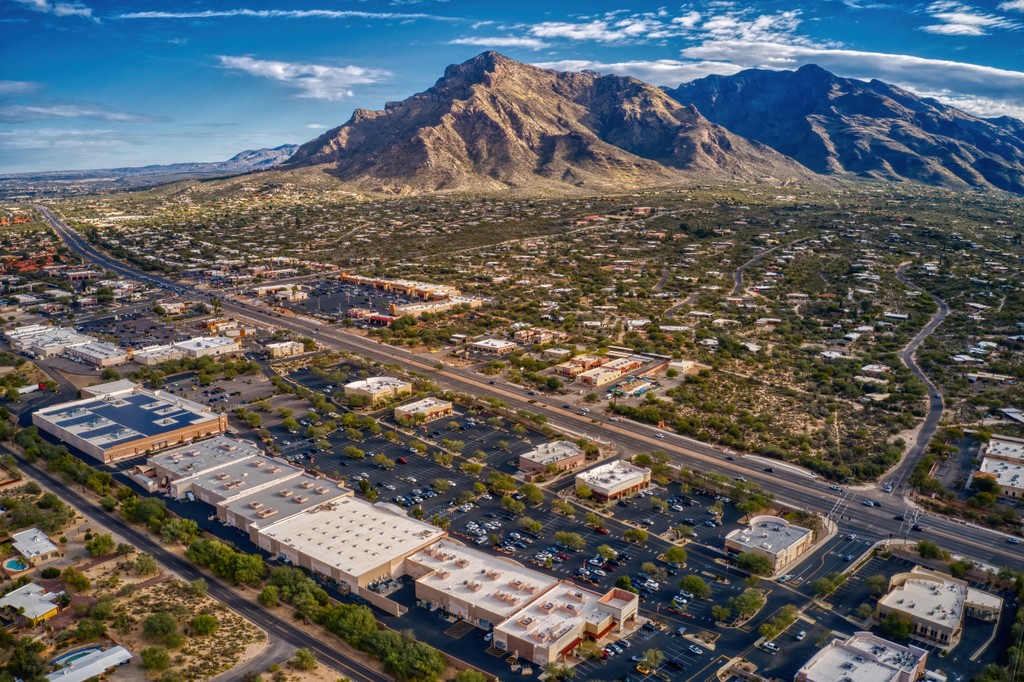 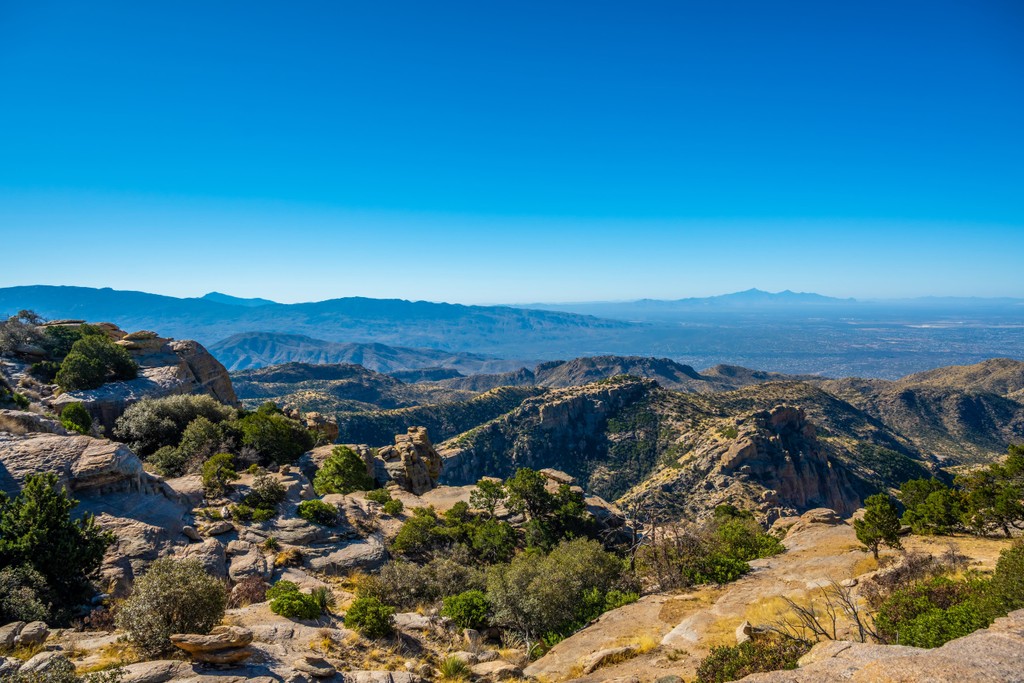 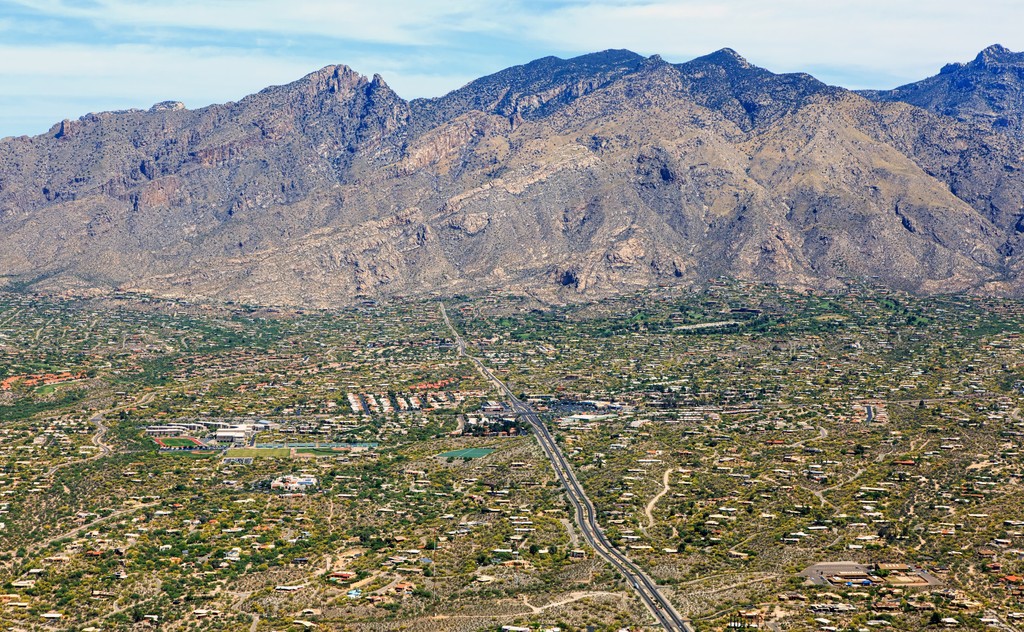 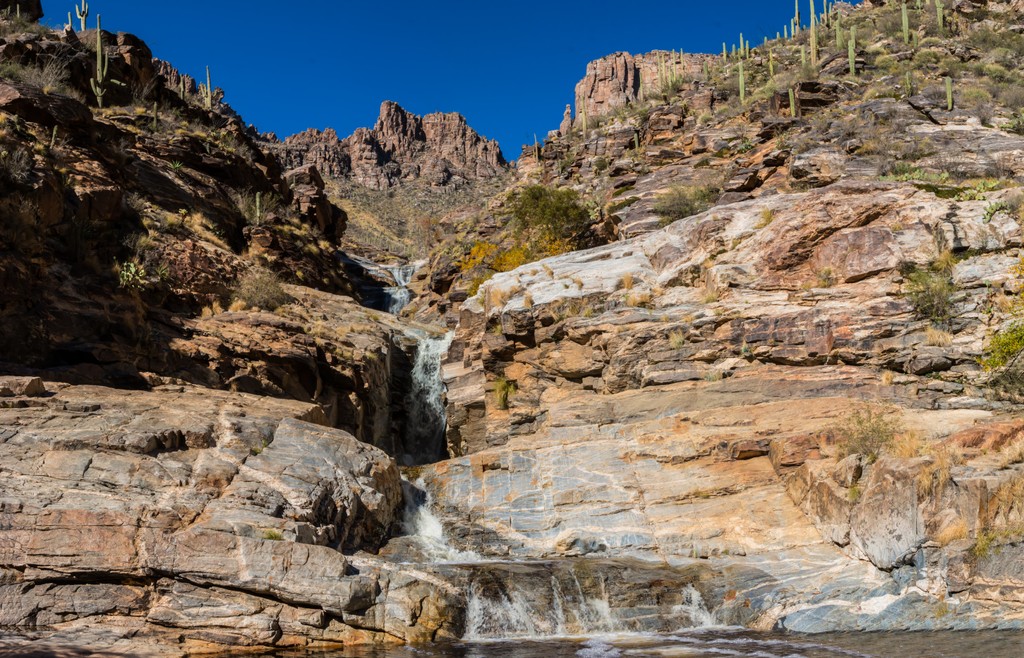 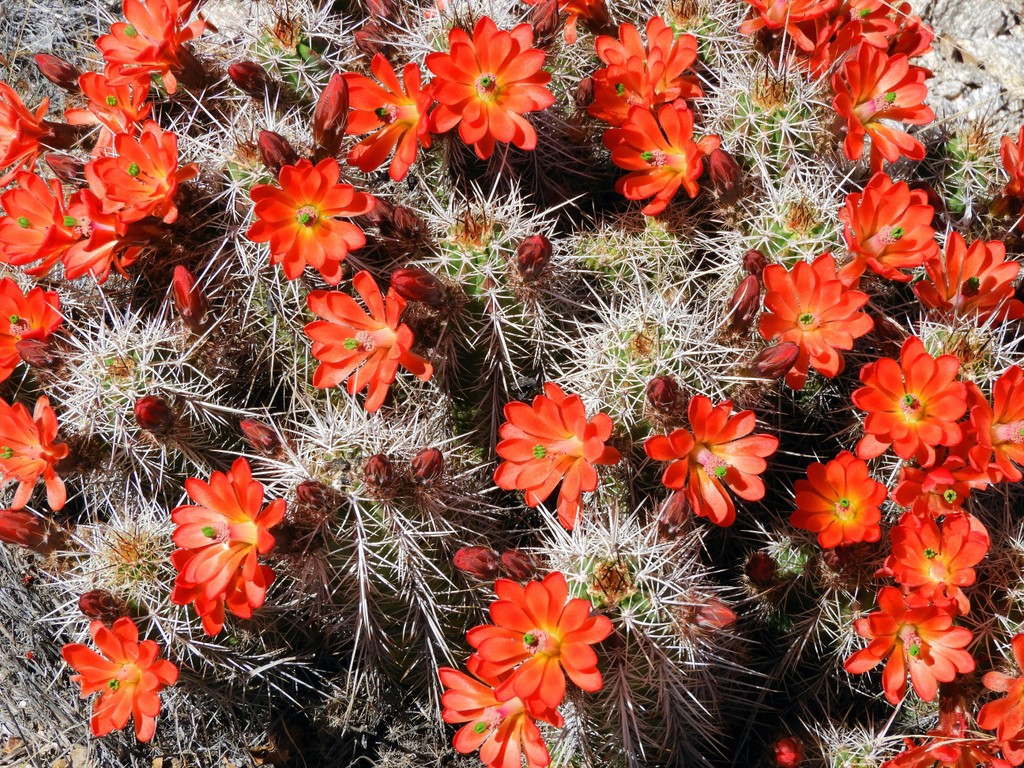 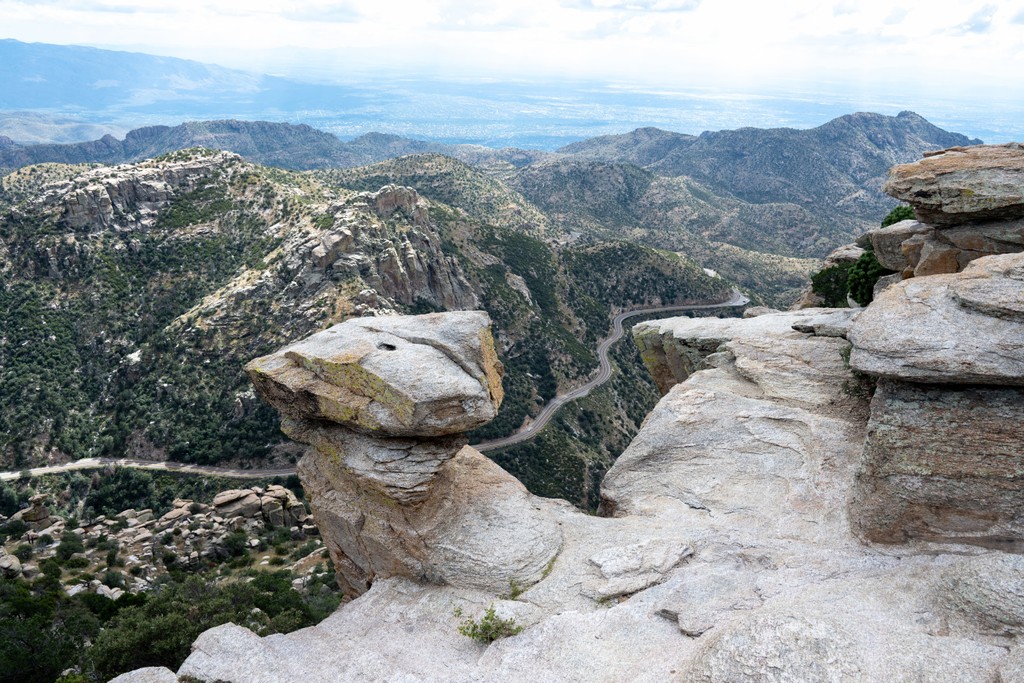