The Manzano Mountains are a mountain range situated to the southeast of Albuquerque, New Mexico and just to the south of the more popular Sandia Mountains, which border the city to the east. The Manzano Mountains run for about 40 mi (64 km) from north to south and boast 27 major peaks, the most prominent of which is Manzano Peak at 10,098 ft (3,078 m) in elevation. 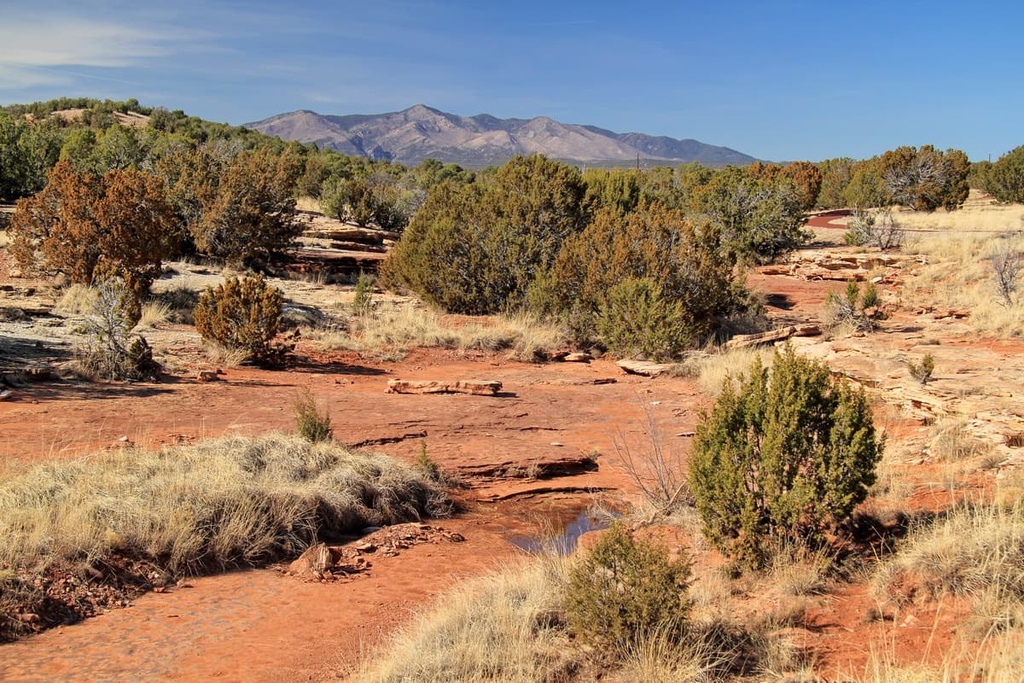 The Manzano Mountains are located in the central part of the US state of New Mexico, just outside the city of Albuquerque. They’re situated in Socorro, Torrance, Valencia, Bernalillo, Santa Fe, and Sandoval counties.

The peaks were named for the apple trees (manzanos in Spanish) that were planted in the nearby town, which is also named Manzano. Tree ring analysis suggests that the trees were planted after the year 1800, although according to local accounts, they were planted in the seventeenth century by Spanish missionaries traveling to nearby Indigenous communities.

The majority of the mountains are included in the Manzano Mountain Wilderness area of the Cibola National Forest, which covers 37,000 acres (14,970 ha) of land and contains 64 miles (103 km) of trails, including the 22-mile (35 km) Crest Trail.

Capilla Peak, which is rarely climbed by hikers, also houses the Capilla Peak Observatory. This observatory boasts a 24 inch (61 cm) optical telescope owned by the Institute of Astrophysics at the University of New Mexico.

The terrain in the Manzano Mountains is steep and rugged, and it is punctuated by jagged rocky outcroppings.

Major canyons include Fourth of July Canyon, Trigo Canyon, Comanche Canyon, Red Canyon, and the Ojito Canyon, which is located southwest of Mosca Peak. There are no trails into Ojito Canyon. The Fourth of July Campground and Canyon are the most popular destinations in the mountains, as people go there to see bigtooth maple trees change color in the fall.

The Manzano Mountains are separated from the Sandia Mountains by the lower elevation Manzanita Mountains and Tijeras Canyon. Interstate 40 (I-40), which follows the route of historic US Route 66, runs through the canyon between the ranges.

The Manzano Mountains run from north-south and are considered an east-tilted fault block. The range formed as part of the eastern edge of the Rio Grande Rift during the Miocene, about 15 to 20 million years ago.

Three layers of Precambrian rock are recorded in the Manzano Mountains. The area consists primarily of basal Sais quartzite overlain by Blue Springs schist and White Ridge quartzite, followed by 5,000 ft (1,524 m) of rhyolite flows and intercalated basic sills. I

n the northwest, there’s a small outcrop of granite. In the south, Priest granite and associated pegmatite and aplite dikes are present in older formations. Vein quartz ranging from thin stringers to massive quartz reefs over 1,000 ft (305 m) thick are prominent throughout the range.

Marine seas that once covered New Mexico during the Late Paleozoic era deposited Mississippian- and Pennsylvanian-age sediment. These sediments consist of a mixture of thin non-marine limestones, siltstones, sandstones, as well as marine limestones and shales.

Similar to the Sandia Mountains to the north, high desert landscapes at the base of the Manzano Mountains give way to alligator juniper, pinyon pine, Emory oak, and Gamble’s oak that cover lower areas in the range. Gradually, the flora in the range shifts to subalpine forest, with ponderosa pine, spruce, fir, and aspen trees dominating at higher elevations.

The Fourth of July Campground on the eastern side of the mountains boasts the only stands of bigtooth Maple trees in the area, which are a big draw for visitors in the fall.

Non-raptors bird species found in the range include the migrating sandhill crane, corvids, nuthatches, warblers, juncos, swallows, woodpeckers, and a variety of hummingbirds.

Prehistoric people have traveled and hunted in the Estancia Basin beginning about 12,000 to 10,000 years ago.

Between 900 and 1500 CE, the Pueblo people mined salt from the playa lakes within the Estancia Basin and traded with tribal nations on the Great Plans to the east as well as other tribal nations along the Rio Grande to the west. The Ancestral Puebloans along the western edge of the Estancia Basin traditionally grew squash, beans, and cotton. They built villages at the Salina Pueblos called Abò, Quarai, and Gran Quivira.

The main visitor center for the Salinas Pueblo Missions National Monument, which was established in 1980, is located in the small town of Mountainair. The Quarai site sits a few miles to the southeast of Manzano Mountains State Park.

Today, the Manzano Mountains are home to the Isleta Pueblo, which is generally closed to the public. The Isleta Pueblo, which was established in its current location around 1200 CE, is home to the Tiwa people, who are descendants of the Shoshoncan people. The Shoshoncan are said to be the first people to have migrated to what is now the Americas approximately 30,000 years ago.

Best Hikes in the Manzano Mountains

There are more than 64 miles (103 km) of trails that access the Manzano Mountain Wilderness. They are much less trafficked than the trails in the Sandia Mountains to the north, due in part to their distance from the city and a lack of both water sources and campsites.

The terrain in these mountains is steep and jagged, and many of the trails are quite exposed, making hiking difficult in hot months.

Popular hikes in the area include:

Looking for a place to stay near the Manzano Mountains? Here are some of the best cities and towns to check out:

The largest city near the Manzano Mountains is Albuquerque to the north. New Mexico’s largest city was founded in 1706 as a Spanish colony, although Coronado first settled in the area that is modern day Albuquerque in 1540.

Named after the Viceroy of New Spain, who was also the tenth Duke of Alburquerque, the city served as an outpost on El Camino Real which linked Mexico City to the northern territories of New Spain.

Sitting in the high desert at an elevation of 5,314 ft (1,619 m), the city has a population of 583,942. The city’s Old Town central plaza maintains the feel of a Spanish colony with historic adobe buildings and serves as a tourist center with shops and restaurants.

Albuquerque has five museums, as well as a zoo and botanic gardens. The Rio Grande runs through the city to the west.

The Nearby Acoma Pueblo, also called “Sky City,” holds claim to the title of oldest continuously inhabited community in the US, dating back to 1,000 CE.

Situated slightly further to the north of the range is the state capital, Santa Fe. Located in the foothills of the southern Rocky Mountains, and sitting at an elevation of 7,000 feet (2,133 m), Santa Fe is the highest and oldest state capital in the country.

The quaint city, with a population of about 85,000 people, is renowned for its historic architecture, vibrant art scene, and rich history that melds Hispanic, Anglo and Indigenous cultures. The city boasts nearly 250 art galleries as well as dozens of museums, including the popular Meow Wolf.

Accommodations are diverse and the restaurants are plenty in this charming town. Its proximity to mountains and wilderness make Santa Fe a must-see for those who enjoy the outdoors. There are also ample hiking and skiing opportunities to enjoy in and around the city.

Los Lunas, which is located about 27 miles (43 km) to the south of Albuquerque, is a mid-sized college town adjacent to the University of New Mexico’s Valencia Campus. With a population of 16,282 people, Los Lunas is the largest town in Valencia County.

Situated near the center of the range is the town of Belen. Home to the University of New Mexico’s Valencia Campus, Belen is a mid-sized college town with a population of 7,500 people.

Belen was founded in 1740 as Nuestra Señora de Belén (Our Lady of Bethlehem). Belen is Spanish for Bethlehem but gained the nickname “The Hub City.”

On the east side of the mountains sits the small town of Mountainair. The town is located just 10 miles (16 km) from the geographical center of New Mexico. Incorporated in 1903, Mountainair has a population of just 852 people.

Known as “The Gateway to Ancient Cities,” the town has access to Salinas Pueblo National Monument and the Fourth of July Campground. In the 1400s, the Salinas Pueblo Mission had a population of 20,000 residents. 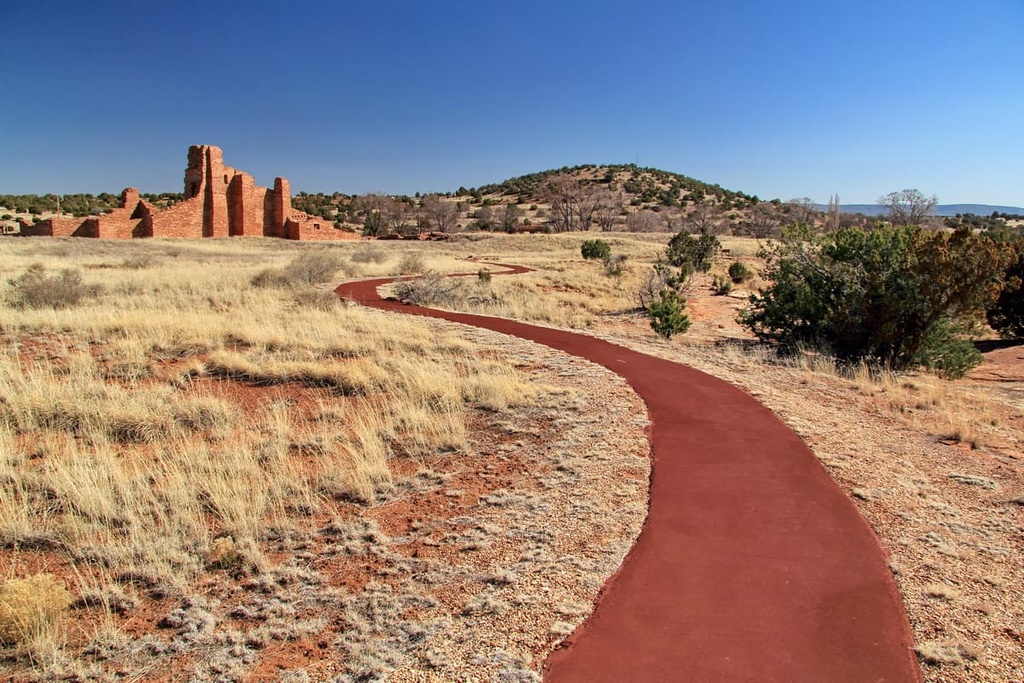 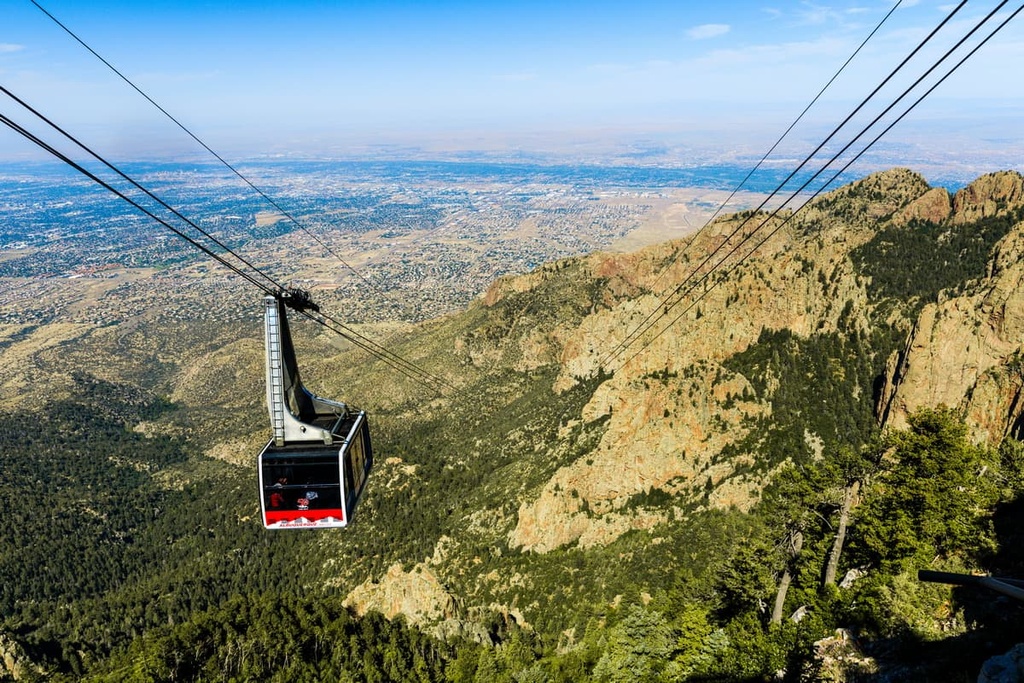 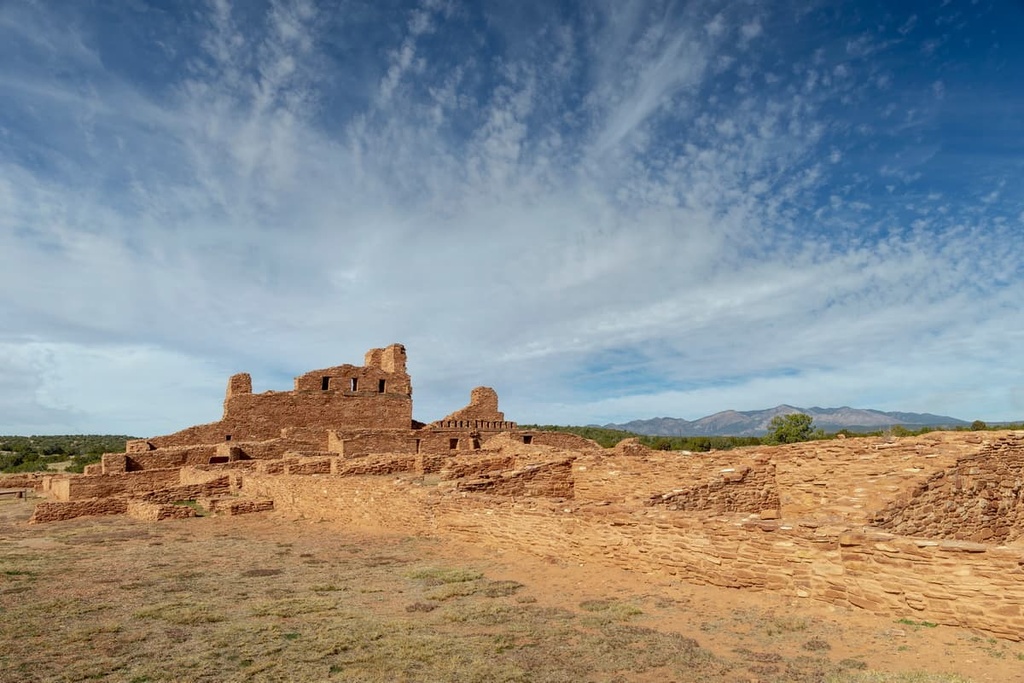 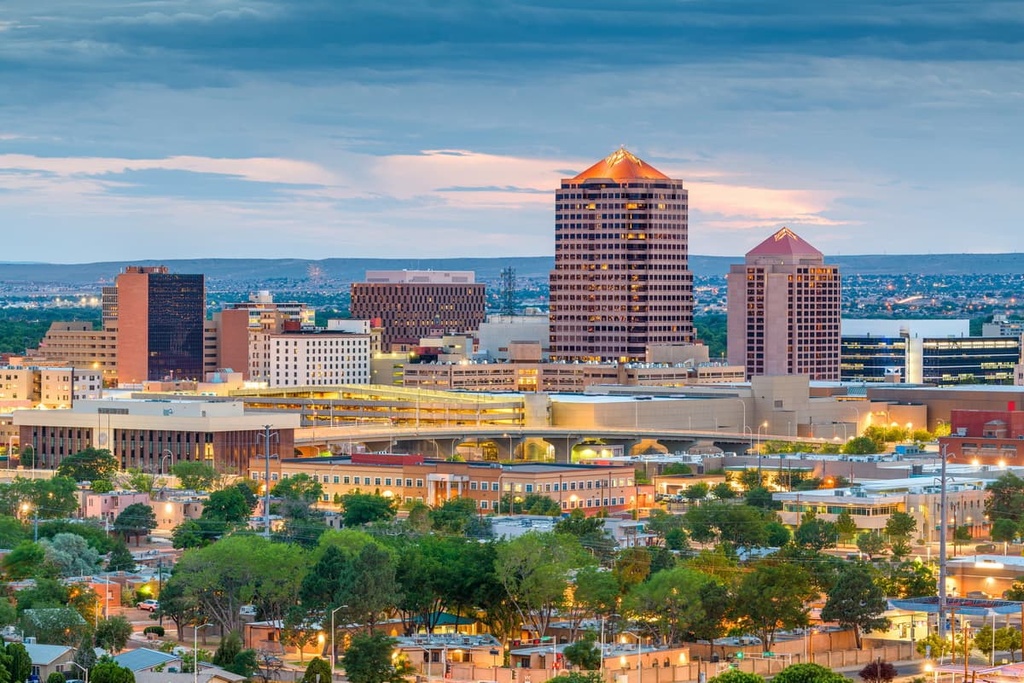