The Graian Alps are a northern segment of the Western Alps spread along the French-Italian border and which also crosses over into Switzerland to the north. There are 1,146 named mountains within this region, providing one of the most densely mountain-populated regions in the Alps. Many of the 1,146 peaks are glacier-covered and rise to more than 4,000m, with the largest mountain being that of Mont Blanc at 4,810m.

In France the Graian Alps belong to the Auvergne-Rhône-Alpes region, and the respective local departments of Savoie and Haute-Savoie. In Italy the range spreads into the Aosta valley and the Piedmont region. It also crosses over into the Swiss canton of Valais. 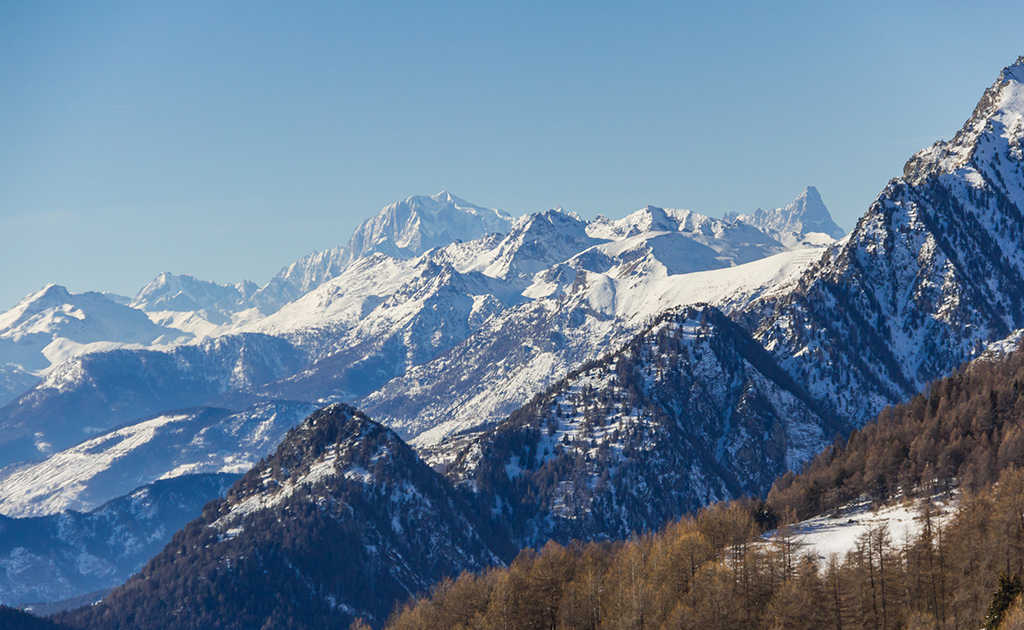 At the heart of the Graian Alps is the Vanoise National Park, located between the Tarentaise and Maurienne valleys, containing the Vanoise massif. It was created in 1963, and is the first national park in France. On the Italian side of the border, the park is continued by the Gran Paradiso National Park. Combined together, they cover an area of over 1200 km squared, making the area the largest alpine national park. The area is also renowned for the Alpine Ibex, a type of mountain goat that tends to live in steep, rough terrain near the snow line. After their extinction in Germany and Switzerland, the Ibex were protected in the Gran Paradiso national park.

Due to its density of named mountains, the Graian Alps can be further divided into the following four groups:

Mont Blanc, or Monte Bianco in Italian, is the highest mountain in the Alps and the highest in Europe west of Russia’s Caucasus peaks. At 4,810m above sea level it is ranked 11th in the world in topographic prominence. There are three towns which surround the base of the mountain with Saint-Gervais-les-Bains and Chamonix in Haute-Savoie, France and Courmayeur in the Aosta Valley, Italy. There are several ways of traversing the mountain: A cable crosses the mountain range from Chamonix to Courmayeur over the Col du Géant, and the 11 km Mont Blanc Tunnel runs beneath and connects France to Italy.

Besides the world famous Mont Blanc, this mountainous region is known most commonly for its abundance of ski resorts. From Chamonix-Mont-Blanc at the foothills of Mont-Blanc, Val Thorens, Les Menuires, La Rosière, Val d’Isère, Méribel, Courchevel in France to La Thuile and Cogne-Gran Paradiso in Italy. There is certainly an abundance of choice for winter sports lovers from around the globe.

The Aiguille du Midi (3,842m) is a mountain in the Mont Blanc massif. Taking the cable car (Téléphérique de l’Aiguille du Midi) from Chamonix mountain explorers can easily access the high peaks on the range and take in breathtaking views of Mont Blanc and the surrounding area. Whilst you cannot immediately walk down from the summit, if you take the cable car back to the halfway point at 2,276m, you can begin your descent on foot. From here there are several options, the simplest is a total of 6.42km in length with -1,243m of elevation. This is recommended for intermediate level hikers (although access to the Aiguille du Midi via the cable car is for everyone as you can return via the cable car). (Est. time 2hrs)

L’Aiguille Pourrie - One of the best places to admire the Mont Blanc massif is from the other side of the Chamonix. This hike to Lac Noir, just beyond l’Aiguilles Pourrie, in the Aiguilles Rouges Nature Reserve is not to be missed! From Chamonix take the télécabine of Brévent and stop at the midpoint of Planpraz. From Planpraz follow signs to the Lac Noir (2,540m). The route to the Lac Noir is 4km, so a total of 8km and 632m of vertical elevation. This trail is recommended for experienced hikers due to the altitude and the duration of the excursion. (Est. time 5h)

Arp Viewing Platform - Accessible via the BMW cable car from Courmayeur. This viewing point at 2,750m is situated on the mountain across the river Veny Valley on the Colle d’Arp. From here you can experience outstanding views of Mont Blanc and the surrounding peaks. This excursion is open to everyone as the cable does all of the hard work to get you to the summit of the mountain.

Pointe de Ronce (3,612m) - Starting from the parking alongside the D1006 on the shores of the Lac du Mont Cenis in the Vanoise National Park, climb up to Pointe de Ronce. Once at the summit, there are impregnable views of the Pointe de Charbonnel (3,751m) across the valley, and also back down to the Lac du Mont Cenis. This 15.72km hike has a vertical elevation of 1,529m, starting at an altitude of 2083m and climbing up to the summit at 3612m. Due to the altitude and length of the climb, this is recommended for experienced hikers. (Est. time 5h30)

Lac de la Sassière (2465m) - Starting from the parking next to the Ruisseau de la Sassière 2,268m (accessible from the road between Tignes and Val d’Isère), the hike is a steady 3km along a rugged mountain trail/road. There is a total vertical elevation of 197m, with a total distance, returning back to the parking of 6km. There are possibilities of extending the route beyond the Lac de la Sassière towards the base of the Becca la Traversière which dominates the French/Italian border. Doing this would add another 3km and 400m of vertical elevation. With both of these options there is something for everyone. The hike to the lake would be ideal for beginners to intermediates and could be achieved in around 2hrs 30mins. The extended hike would be best suited for intermediates to experienced hikers, being completed in around 5hrs.

Gran Paradiso (4,061m) - This two to three day expedition starts from Le Breuil, a small hamlet at the end of SR23, a connecting road just beyond Aosta. This 19km return route climbs and climbs to the lofty heights of the Gran Paradiso summit at 4,061m. Beginning at 1,959m above sea level, there is a total vertical elevation of 2056m. The snow covered peaks require the correct equipment and this route is only recommended for highly experienced mountaineers, with an accompanying guide. It would be incredibly difficult to complete the climb in one day, therefore an overnight stop in the Vittorio Emanuelle 2 Refuge at 2,732m is strongly advised. The following day, the final ascension to the summit can be achieved. Once at the summit, there will (depending on the cloud coverage), be beautiful panoramas in every direction. Return back to the refuge on the second day for a well earned rest before returning back to base camp on the third day. (Est. time 2-3 days)

The trail to Lago d'Arpy takes almost 2 hours and rewards visitors with spectacular views of Grand Jorasses massif reflected in waters of high altitude lake. Another interesting photo location is Lago Checroui. It is a mere 1 hour hike for a perfect Mont Blanc reflection. The place is so attractive that we've included it into our PeakVisor virtual demos available in the app.

Aiguille Rouge and a view of Mont Pourri (3,779m) - From the ski station of Les Arcs 2000, take the cable car from the town to the summit of the Aiguille Rouge. The views from the summit are truly exceptional. Mont Pourri and Mont Turia can be seen to the south, as well as a large section of the Natural Reserve of the Hautes de Villaroger below. The cable car journey can take up to an hour from bottom to top, but the views are well worth the wait!

Roche Parstire (2,108m) - Whilst not at such a high altitude as some of the other hikes, this relatively short route has a very high reward. The beautiful views over the Lac de Roseland compete with the highest of peaks. The alpine planes of the Col du Pre expand down to the lake with the rugged peaks of the Pointe de Presset (2,836m). At only 3.82km in length with a total vertical elevation of 283m this hike is accessible to everyone, including families. (Est. time 1h30) There are many more possibilities to extend the route or even explore the local area at your own volition. The road is equally accessible via bike and the Tour de France passed by the lake in 2018.

In the winter months Bourg Saint Maurice serves as a local hub for the ski resorts within the Tarentaise Valley. The last large town before continuing on to Tignes and Val d’Isère further down the Valley. It is also home to an invaluable hospital which treats those injured on the local slopes. In the summer months it becomes a haven for alpinists, cyclists and mountain bikers. In 2018 it was home to several stages of the Tour de France and the Critérium du Dauphiné, with the peloton passing through the village on the way to a summit finish in the ski resort of La Rosière. Beyond La Rosière is the high mountain pass of the Col du Petit Saint-Bernard.

Chamonix Mont-Blanc is a commune in the Haute-Savoie département. It was the host town of the first Winter Olympics in 1924 and is one of the oldest ski resorts in France. In the shadow of Mont-Blanc and in close proximity to the massive peaks of the Aiguilles Rouges and the Aiguille du Midi, Chamonix is very popular with skiers and mountain enthusiasts. Via cable car it is possible to gain easy access to the Aiguille du Midi and the large off-piste area of the Vallée Blanche (the White Valley).

Moûtiers is a small town in the Tarentaise valley in the Savoie département. Despite its size, it is an important transport hub for the local area. Serving as the access point to the Les Trois Vallées ski area, Moûtiers’ train station is an important seasonal destination for TGV trains from Lyon, Paris and beyond. There is also bus terminal which connects airport transfers to the various ski resorts.

Aosta is an Italian city and the primary city of the Aosta Valley in the Western Alps. Thanks to its close proximity to the French/Italian border it is a bilingual region, with the majority of its residents speaking French and Italian. It is located a short distance down the valley from the Italian entrance to the Mont Blanc Tunnel.

Courmayeur is a town in the Aosta Valley. It is located at the base of the southern side of Mont Blanc and at the mouth of the Mont Blanc tunnel, connecting the Aosta Valley with the Chamonix Valley. It is the highest commune in Italy. Alongside Chamonix, Courmayeur shares access to the glacial ski run of the Vallée Blanche. Mont Blanc is easily accessible via the Skyway Monte Biano - a cable car linking Courmayeur with Pointe Helbronner on the southern side of Mont Blanc. The project took over three years to construct, finally opening in 2015 and, at a cost of 110 million euros, is considered the most expensive cable car installation.

Martigny can be found in the Swiss canton of Valais. It is at a crossroads with connections leading to Italy, France and Switzerland. It is an area which is famous for the Col du Grand Saint-Bernard which connects Martigny with the Aosta Valley. In May, 1880 Napoleon Bonaparte traversed the high mountain pass with his army to get to Italy. 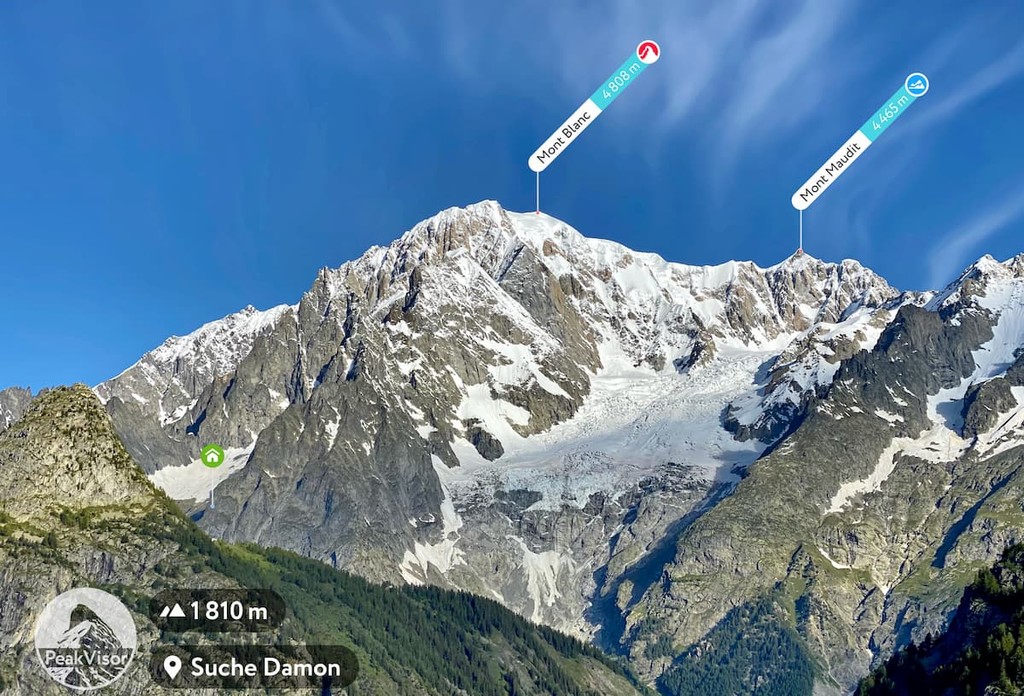 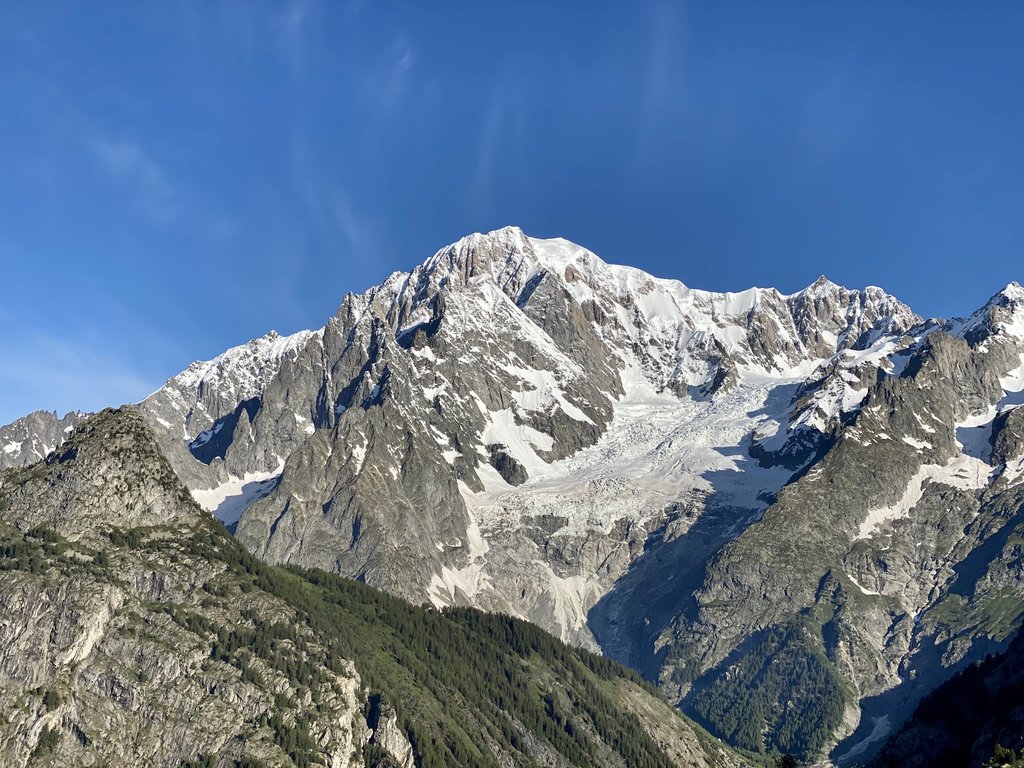 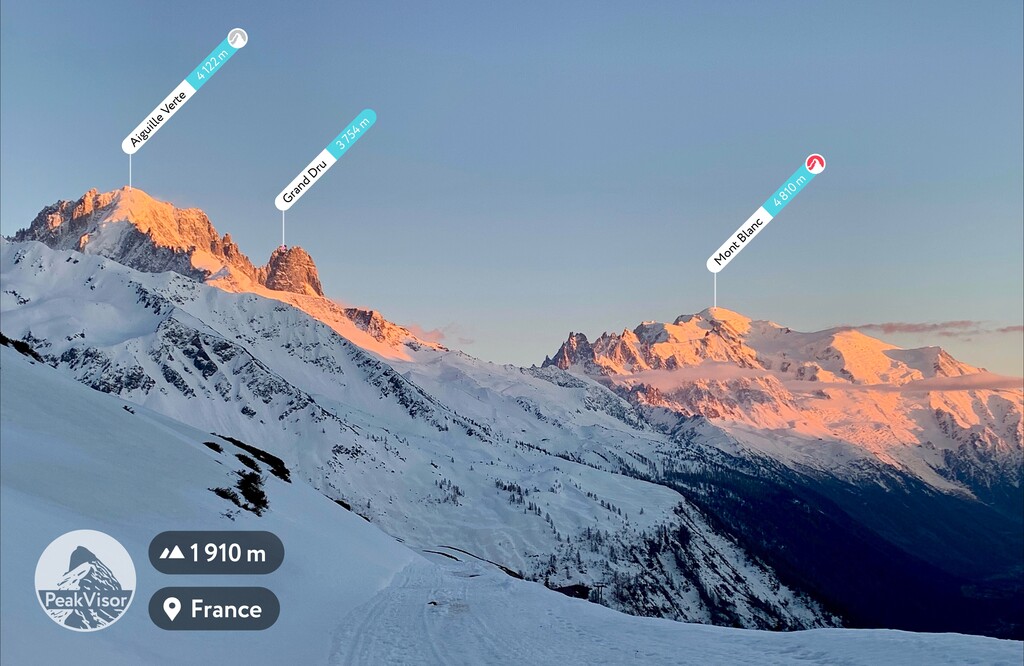 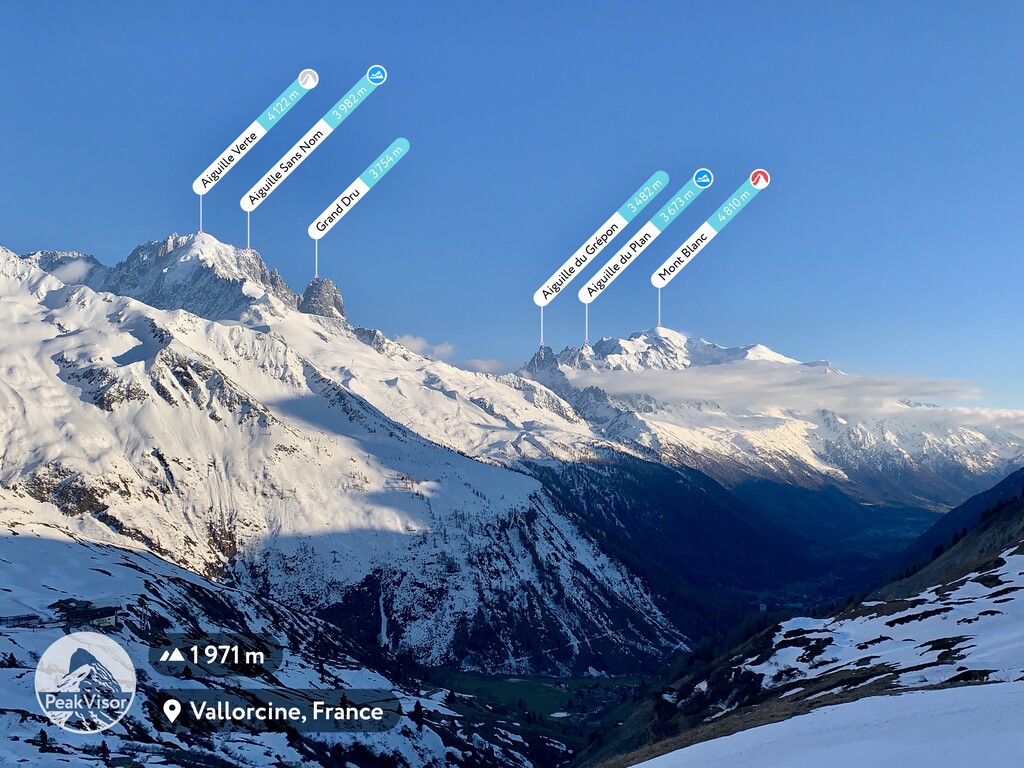 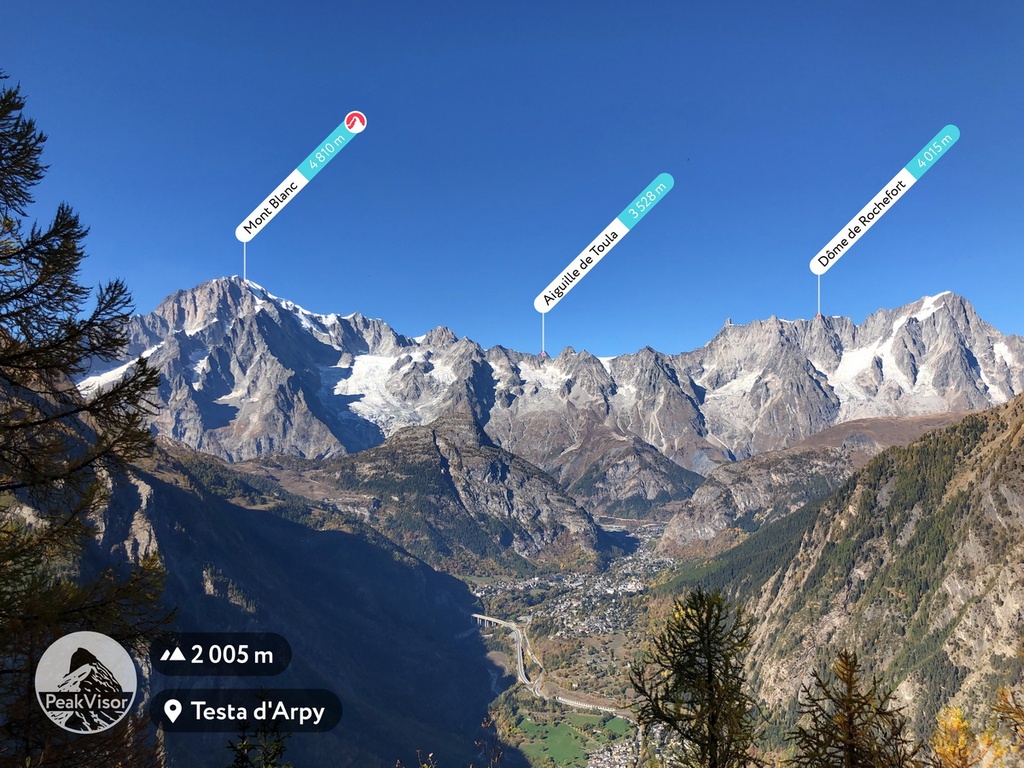 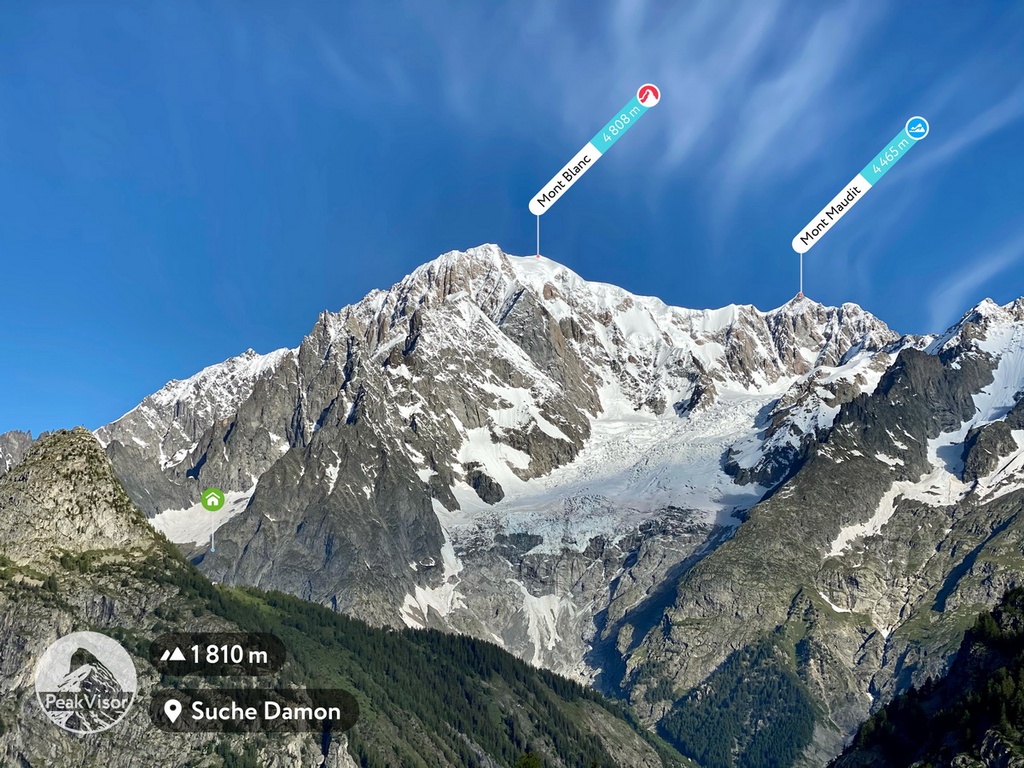