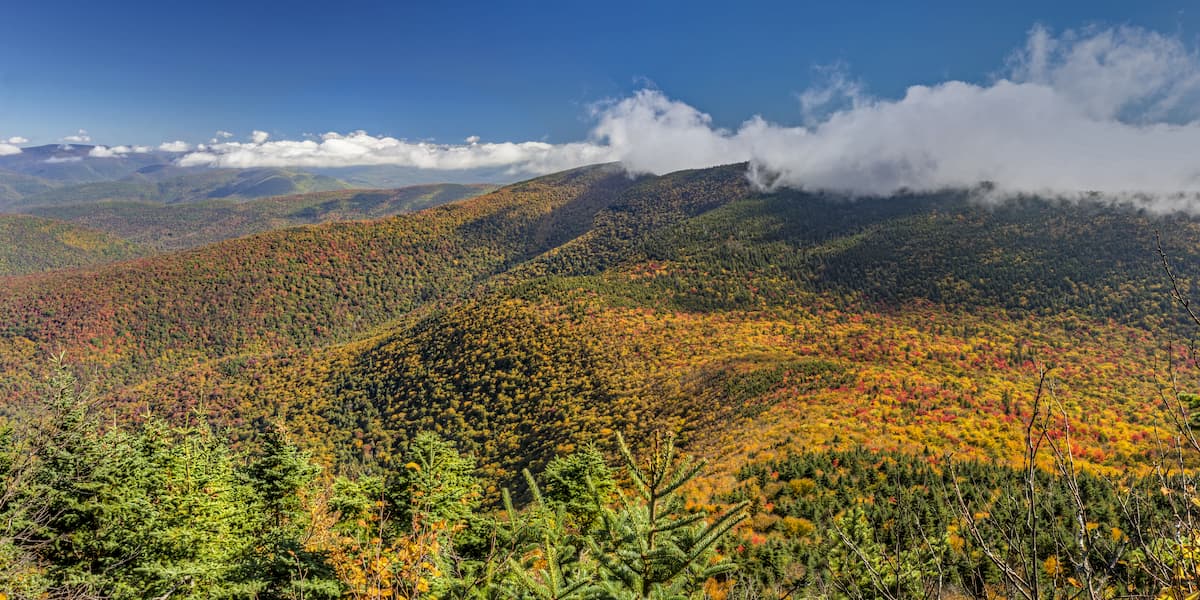 Ten of the thirty-five official Catskill High Peaks are located in the Slide Mountain Wilderness. All of the peaks in the wilderness area are above 2,000 ft (610 m), with most above 3,000 (914 m). However, only Slide Mountain reaches above 4,000 ft (1,219 m). Nearby Hunter Mountain in the Hunter-Westkill Wilderness is the only other Catskill peak above this elevation.

The Slide Mountain Wilderness Area is a popular area for hiking, camping, fishing, and hunting in the spring, summer, and fall. It is also a nice place to go cross-country skiing and snowshoeing in the winter.

There are twenty-four primitive campsites and three backpackers’ shelters in the wilderness area. Dispersed camping is allowed as long as campers are 150 feet (46 m) away from any trail, road, or body of water.

As a protected wilderness area, only low-impact recreational use of the land is allowed. Motorized equipment is prohibited and even the use of chainsaws for trail maintenance requires a permit from the Department of Environmental Conservation (DEC).

This wild character is one of the defining features of the Slide Mountain Wilderness. In fact, the upper valley of the Neversink River is the only completely undeveloped valley in the Catskills. From several of the surrounding peaks, it’s possible to look out and see no signs of human settlement in any direction.

The Slide Mountain Wilderness is surrounded by other protected forest areas, including the Big Indian Wilderness, the Hunter-Westkill Wilderness and the Sundown Wild Forest.

Unlike the nearby Adirondacks, the Catskills are a subrange of the Appalachian Mountains. They’re considered to be a mature dissected plateau, as opposed to a series of mountain ranges. The plateau of the Catskills was formed by sediment buildup and tectonic uplift over hundreds of millions of years during the Devonian and Mississippian Periods.

This plateau was worn away by natural erosion and glaciation to expose the original sedimentary rocks producing the peaks, ridges and valleys we see today. The rocks of the Catskills are mostly siliciclastic, including sandstones, mudrocks, and conglomerates.

Panther Mountain, one of the main peaks of the Slide Mountain Wilderness, was created by a meteor strike and subsequent sediment buildup in the impact zone. The outline of the 6 mile (9.7 km) wide, 375 million-year-old crater is still visible in the nearly perfect circle that Esopus and Woodland creeks make around the mountain.

While there are no major lakes or ponds in the Slide Mountain Wilderness, important regional streams that supply water to New York City start in the preserve, including the Neversink River and both Rondout and Esopus creeks.

Like most of the Catskill Peaks, the Slide Mountain Wilderness is almost completely forested. There are five main forest communities in the area. This includes three types of boreal forest including mountain fir and spruce trees as well as two types of northern hardwood forest emphasizing hemlock and beech-maple groves.

Due to their height and remoteness, parts of the Slide Mountain Wilderness escaped the extensive logging that befell much of the area in the 1800s. One of the largest groves of old-growth hemlocks in all of the Catskills is located in the area.

The area supports several varieties of ferns and wildflowers, including a colony of nodding pogonia, a special type of orchid which only grows in three other places in the state of New York.

There are healthy populations of black bear, white-tailed deer, and wild turkey in the wilderness area. All three of these animals are hunted. Beaver, fisher cat, and coyote populations are also hunted for pelts.

Some of the notable birds in the area include Bicknell’s Thrush, scarlet tanager, rose-breasted grosbeak, Canada Warbler, and red-eyed vireo. There are a total of nearly 100 species of birds in the wilderness area.

The earliest inhabitants of the Catskills area were the Mohicans, an Eastern Algonquin group, and the Esopus, a tribe of Lenape people. Both groups spoke dialects of Algonquin and used the lands primarily for hunting and fishing, but likely didn’t have permanent settlements in the wilderness area due to the rough mountain terrain.

After the arrival of colonists, the groups’ were decimated by violence and dispossession from their lands, until remaining members of both the Esopus and the Mohicans were forcibly removed to form the Stockbridge-Munsee Community in what is now Wisconsin.

After the area came to be dominated by European-decended settlers, it was heavily exploited for a number of industries, particularly the logging and charcoal industry in the nineteenth century. Hemlock trees were extensively stripped of their bark for tannins, which were used in the massive New York leather tanning industry that proliferated during the era.

By the later part of the 1800s, conservationist sentiment was growing as locals and visitors increasingly lamented the polluted streams and clear cut forests.

Along with the Adirondack Park to the north, the Slide Mountain Wilderness was first protected as part of the Catskill Forest Preserve by the state of New York in 1885, but wasn’t officially designated a wilderness area until a century later in 1985.

In fact, much of the Catskills were so heavily used by industry that the area had been deemed ruined and useless for forest preservation. The Slide Mountain Wilderness was added to the forest preserve legislation not for conservation reasons, but to settle a tax dispute between Ulster County and the state of New York.

After the land was legally conserved, forests in the area began to recover and recreational interest grew. The first hiking trail built at public expense in New York’s whole forest preserve system was the Slide Mountain Trail, which was built for $250 in 1892. It’s still the most popular route to the Catskills’ highest summit.

The area was officially designated as Catskill Park by the state legislature in 1904, delineated on maps by the famous “Blue Line,” like what was also used to demarcate the Adirondack Park to the North.

Today, the trails of the Slide Mountain Wilderness are maintained by the New York-New Jersey Trail Conference (NYNJTC), a group that maintains trails in the greater New York City area.

The Catskill 3500 Club represents peak baggers in the area who aim to climb the 35 highest peaks in the Catskills. The club requires a total of 39 climbs to gain membership—Slide, Blackhead, Balsam and Panther Mountains must be reclimbed in the winter. As of December 2020, there are 3,437 members.

There are 35 miles (56 km) of hiking trails in the Slide Mountain Wilderness, some of which parallel the NY/NJ Long Path Trail, a 350 mile (560 km) long-distance trail that runs from the George Washington Bridge in New Jersey to Altamont, New York. For more information, refer to the official map of the area.

The biggest hiking opportunity in the area is Slide Mountain, the highest point in the Catskills. However, there are multiple approaches to the summit, so it’s important that you choose the route that’s right for you.

The shortest route follows the Phoenicia East Branch trail from the Oliverea Road south parking lot to join up with the Burroughs Range Trail. Total distance to the summit one-way is 2.7 miles (4.3 km) with 1,780 ft (543 m) of elevation gain.

If you’re looking for a longer and more challenging hike, you can follow the whole Burroughs Range Trail, which crosses Wittenberg, Cornell and Slide Mountains in 9.75 miles (15.7 km) with 3,620 ft (1,103 m) of elevation gain one-way. The hike takes you past some of the best panoramic views in the area.

The Curtis-Ormsbee Trail, which can be accessed via the Phoenicia East Branch trail, goes 1.6 miles (2.7 km) up the western side of Slide Mountain, for a more moderate 900 foot (274 m) climb with three excellent views. This trail is often combined with the Burroughs Range and Phoenicia East Branch trails for a 6.2 mile (10 km), 1,794 ft (547 m) loop over Slide Mountain.

This 9 mile (14.5 km) trail with 3,098 ft (944 m) of elevation change leads over some of the less-hiked parts of the park. From the Burroughs Range Trail, it offers beautiful views from Cross Mountain, winds just below the summit of Mount Pleasant, and crosses Romer Mountain then descends to Lane Street in the village of Phoenicia.

Most of the Slide Mountain Wilderness lies in the town of Shandaken, which is home to about 3,000 people. Shandaken isn’t one settlement but a collection of a dozen tiny hamlets, each with their own unique features.

These mountain villages are charming but small. Visitors should expect smaller communities and not the developed resort towns of the Adirondacks. However, they host some interesting annual events, including an Artists’ Studio Tour and Belleayre Music Concerts.

With about 218 residents, Phoenicia is the most populated hamlet in the town of Shandaken. Although it's tiny, the town is a well-known destination that’s especially popular with New Yorkers.

There are several hotels and inns, a railway museum, and high-end restaurants catering to visiting New Yorkers in the community. The most famous of these is Phoenicia Diner, an old-school breakfast and lunch spot now serving acclaimed modern American fare.

The hamlets of Shandaken and Big Indian are located about 3 miles (4.8 km) apart on Route 28 north of Slide Mountain Wilderness area. Each offers lodging and basic services like a church and post office. In Big Indian, the upscale Peekamoose Restaurant is a popular destination.

There are several notable Buddhist monasteries in the area, including the Big Mountain Retreat Sanctuary and Zen Mountain Monastery, as well as Holy Ascension Monastery, an Orthodox Christian community.

Kingston is a quaint, historic destination and the closest large town to the Slide Mountain Wilderness. The town of 24,000 was actually New York’s first state capital and it has a large concentration of significant buildings located across its three historic districts.

Kingston is situated on the west bank of the Hudson River, and a major draw to the town is the newly redeveloped waterfront area. Visitors can enjoy Kingston Point Beach, ride a 100-year-old streetcar at the Trolley Museum of New York, and take scenic boat trips on the Hudson from the Kingston Marina. 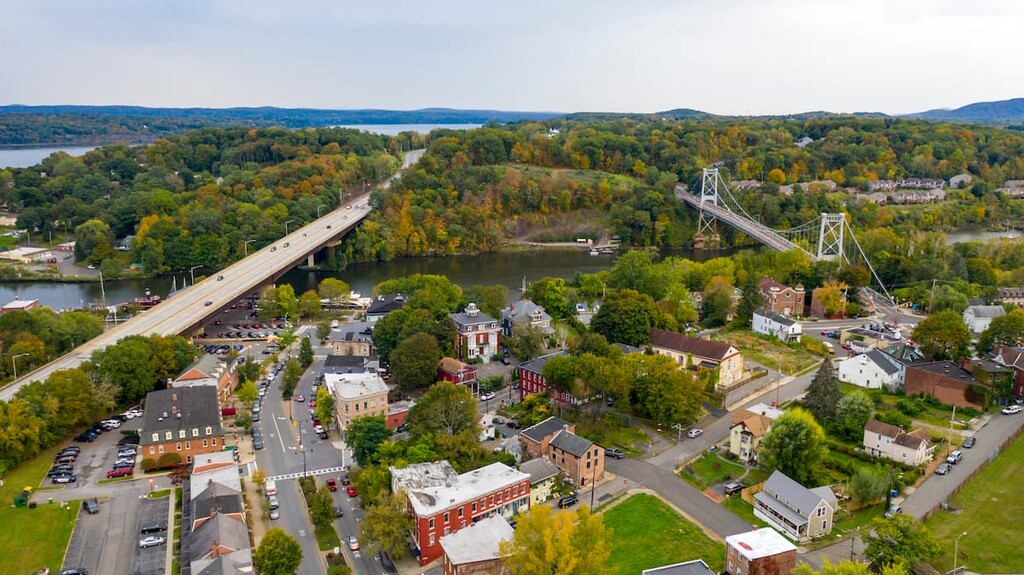 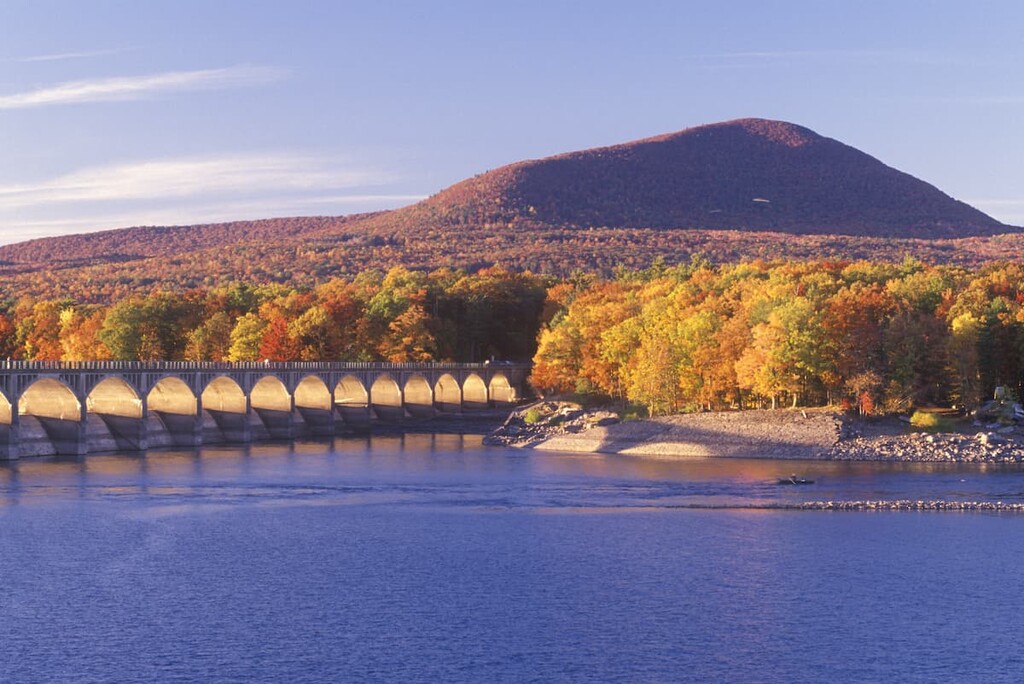 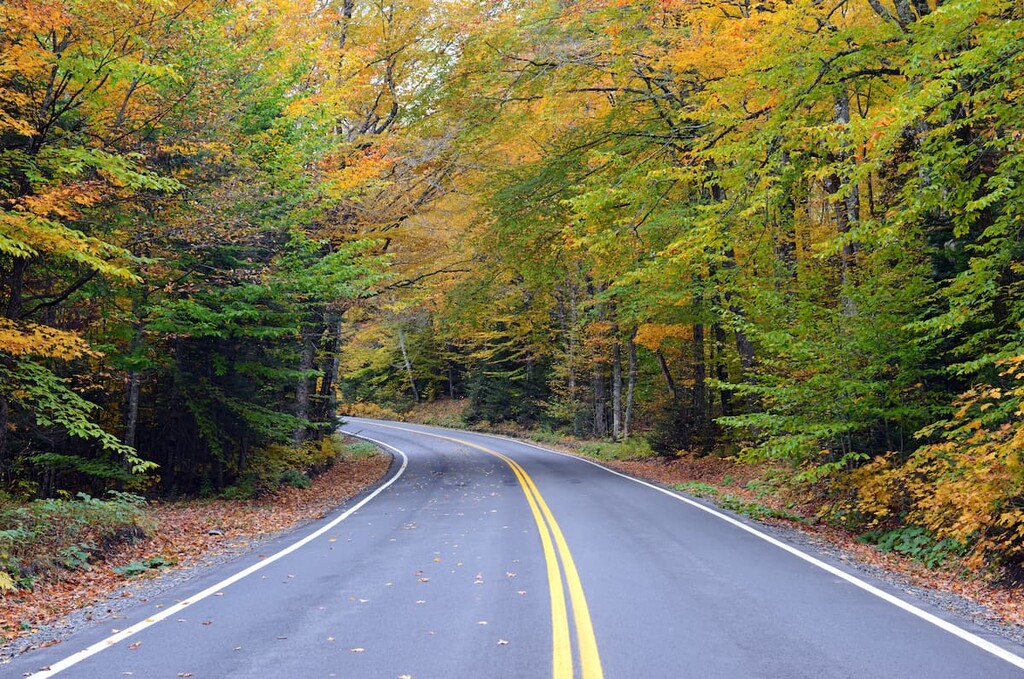 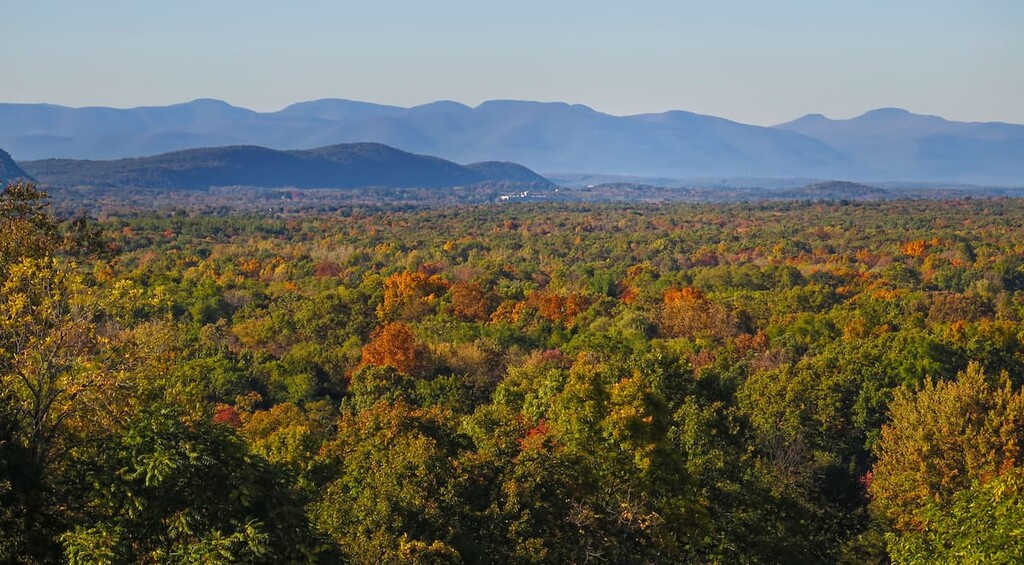 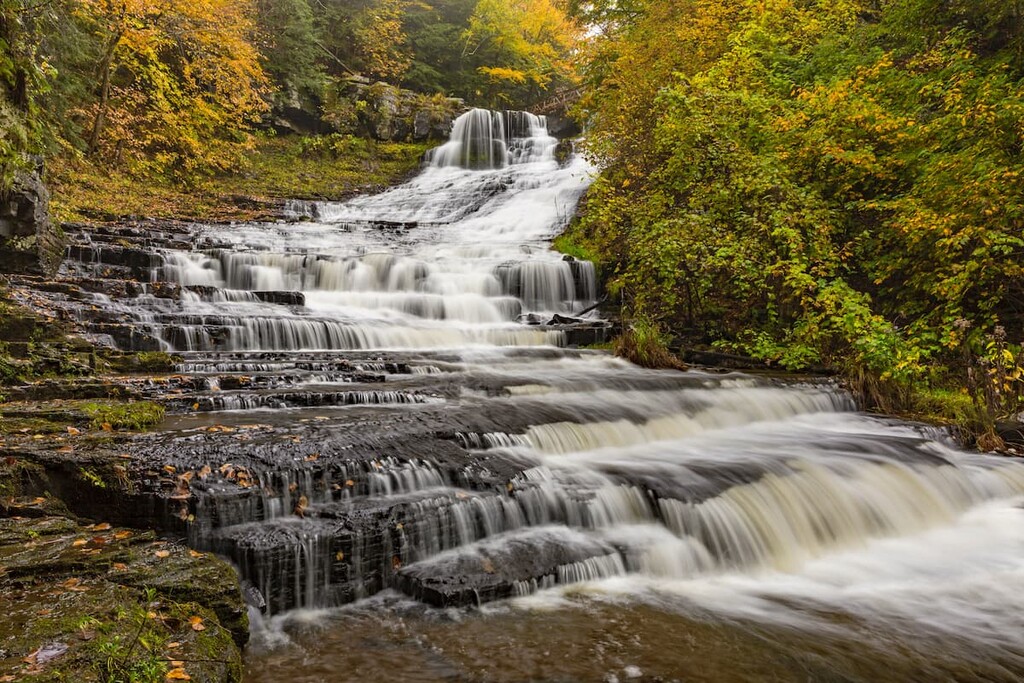 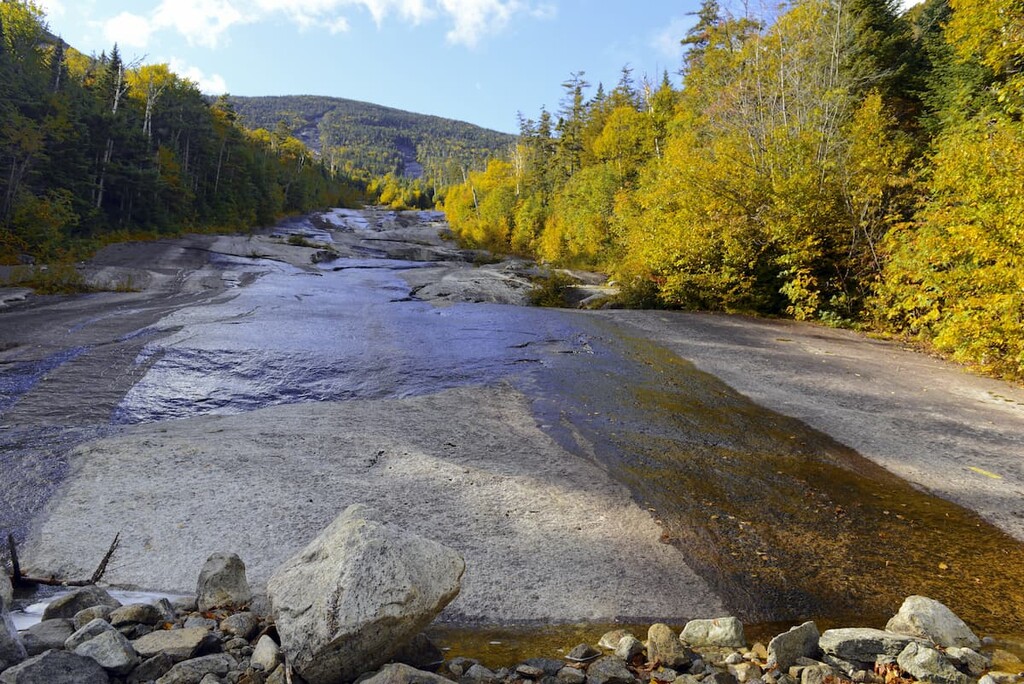