Monte Galero is a mountain massif in Liguria in northern Italy. The massif is situated in the Ligurian Prealps and it contains 16 named peaks. The highest and the most prominent peak in the massif is Monte Galero. 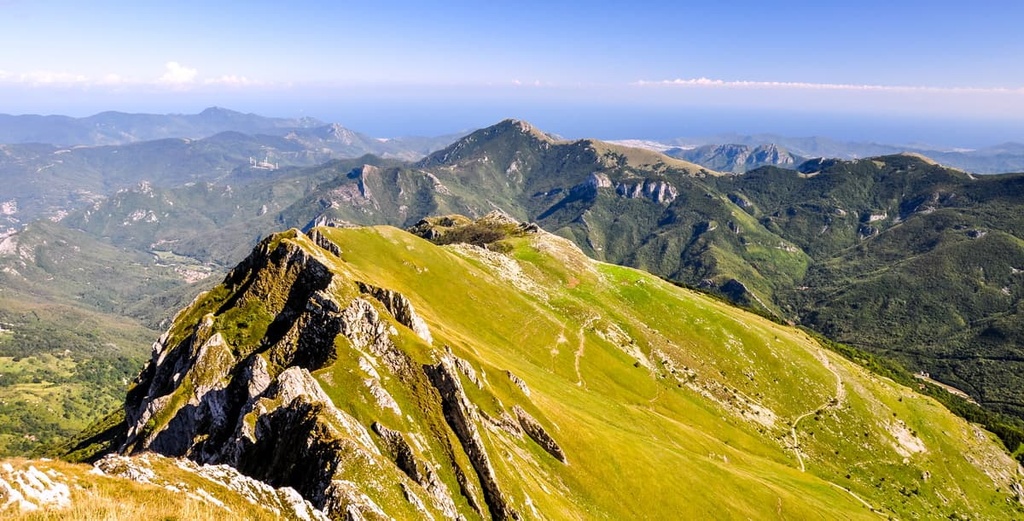 Monte Galero (1,708 m/5,603 ft) is located along the border of the Italian regions of Liguria and Piedmont, just a stone’s throw from the Mediterranean Sea. The Monte Galero massif is situated in the provinces of Cuneo and Savona, and it contains parts of the municipalities of Castelbianco, Erli, Nasino, and Zuccarello.

The massif is situated in the eastern Ligurian Alps, which are often referred to as the Ligurian Prealps, and it is nestled on the watershed between Piedmont’s Tanaro Valley and Liguria’s Neva and Pennavaire valleys.

On the Ligurian side of Monte Galero, an area of 32 sq. km (12 sq. mi) has been designated as a site of community interest and a special area of conservation within Liguria in order to maintain and restore the natural habitat of the area.

Monte Galero and its protected area are part of the Ligurian Alps, which were formed from the rock created at the bottom of an ancient ocean around 200 million years ago. The present rock formation emerged over 38 million years ago and has since been shaped and eroded over the course of millions of years into what we see today.

The massif of Monte Galero is characterized by grassy slopes, terraced belts, dolomite walls, deep gorges, thick woodland, caves, and streams. The steep, humid north side of Monte Galero is covered mostly in woodlands. Meanwhile, the southern side is more exposed and largely bare of trees, so it consists primarily of grassy slopes and rocky walls.

The area displays a variety of different rock formations, with the so-called “stone giants” (Brecce di Monte Galero) being of particular interest. These rocky pinnacles are situated on the western ridge and are the eroded remains of an ancient olistorome.

Other varieties of rock found in the area are the dolomites of Monte Arena, limestones with flint lenses, and arenaceous limestones that contain nummulites.

Although the territory of the Monte Galero massif is relatively small, it contains a variety of habitats that are rich in different plant species and animal life, as well as endemic species. This is thanks to its proximity to both the Mediterranean Sea and the Alps. The variety of habitats in the region include pastures, woodland, rocky terrain and scree.

Above the 1,500 m (4,921 ft) mark, the area starts to feel distinctly more Alpine and consists of chestnut, beech, and larch woodlands, opening into rocky grasslands where you’ll find edelweiss growing a short distance from lavender.

Within the variety of ecosystems in Monte Galero, there are also several rare and endemic species such as the Savona bellflower (Campanula sabatia), Ligurian gentian (Gentiana ligustica), and Ligurian helianthemum (Helianthemum lunulatum), the latter of which is a relict glacial species endemic to the Ligurian Alps. Another relict glacial species found in the southern part of the range is the Alpine camedrio (Dryas octopetala).

There are plenty of bird species to be spotted here, including the golden eagle, peregrine falcon, and black grouse. In fact, it’s believed that the mountain is named after the black grouse (in the local dialect gal refers to the black grouse). There are also several endemic invertebrates found on the massif, such as the carabid beetle, and Percus villai.

Human activity in the area around Monte Galero dates back to prehistory. Remnants of prehistoric human life have been found in local caves.

Evidence of predominately Muslim communities (who were often referred to as Saracens in Medieval Christian texts) was also found nearby at the Balma de Messere (also known as Grotta dei Saraceni, or Saracens cave). The caves are located near Ormea, and they were once home to a large fortification, which served as a good base to raid the rich Piedmontese plain.

Another example of early human habitation of the region is the Torre di Barchi, a cylindrical tower located close by in Garessio.

The tower is said to be an example of many that were built around the eighth or ninth centuries, as either a lookout post to scout for Saracens, or potentially used by the Saracens themselves as a base for their raids. An alternative theory is that these towers were built close to the sixth century by the Byzantines to contain the Lombards.

Conflicts continued in the region hundreds of years later in the Nepoleonic era. During this time, it’s believed that large numbers of people who died in locally fought battles were buried in an area on Monte Dubasso that’s now known as the Napoleonic cemetery.

Other than past conflicts, the area is more commonly known for its chestnut production industry, which has been an important source trade in the area for centuries. The region has also long been a producer of olive oil, wine, fruits, and vegetables.

These days, the mountain and its surrounding valleys are decidedly more peaceful, with plenty of beautiful villages to enjoy such as Colletta di Castelbianco, Zuccarello, and Castelvecchio di Rocca Barbena. There are plenty of ways to make the most of the area and take in the views by hiking, biking, horse riding, as well as by climbing in the nearby Val Pennavaire.

Although Monte Galero is a small area, there are several different ways to experience this part of the Ligurian Prealps. Here are some of the best hikes to check out in the Monte Galero massif.

The Ligurian High Route (Alta Via dei Monti Liguri) passes through Monte Galero at the tenth leg of the route, which takes you from Colle San Bartolomeo d’Ormea to Colle San Bernardo di Garessio.

The route starts at Ventimiglia on the French border and makes its way across the spine of Liguria, through the Ligurian Alps and into the Apennines, ending near La Spezia, close to the Tuscan border.

The route consists of 43 legs. As a result, you can hike the whole thing at once or you can complete just a few legs at a time.

The route follows the Ligurian High Route (Alta Via dei Monti Liguri) to the southwest toward Monte Galero, where you can then deviate off the main path at the Bocchino delle Meraviglie to make a loop.

From here, you’ll head through beech woods and up into grassy pastures and along the ridge before reaching Monte Galero’s summit. You’ll then walk back down via the western peak of Galerotto and down between the rocky pinnacles that are known as the Brecce di Monte Galero. Finally, you’ll make your way to Bocchino delle Meraviglie and then head back to your starting point along the original Alta Via path.

The Vignolo - Monte Galero route is a short day hike that starts at the piazza in Vignolo. On this route, you’ll follow a mix of mule paths and dirt roads that lead up toward Colle del Prione.

Here you’ll join part of the Ligurian High Route (Alta Via dei Monti Liguri), which you’ll follow north-east along a grassy ridge. You’ll carry on walking uphill and pass by the western peak until you reach Monte Galero’s summit. The route should take around 3.5–4 hours to complete.

You’ll take the Ligurian High Route (Alta Via dei Monti Liguri) to Monte Galero via Monte Dubasso. This will take you through the Brecce (rocky pinnacles) to reach the summit and some spectacular views.

Val Pennavaire is a large valley that encompasses parts of the provinces of Imperia, Cuneo, and Savona.

There are plenty of walking opportunities in this valley including a 13 km (8 mi) loop route to the top of Monte Armetta. Additionally, there are more relaxing routes in the lower valley. Val Pennavaire is also a climber’s paradise, with plenty of crags for climbers of all ability levels to enjoy.

Although there aren’t many big towns in the immediate area around Monte Galero, there are plenty of places to stay along the coast, as well as B&Bs located around the nearby valleys. Here are some of the best towns and cities to check out in the region.

Albenga, which is nicknamed the “city of one hundred spires,” is a medieval town located in the Gulf of Genoa on the Italian Riviera. The town is unique to the area due to its preservation of the settlement’s ancient Roman layout.

Albegna is a popular summer tourist destination as it is home to many beautiful beaches. It also features plenty of historical and religious buildings in the heart of the old medieval center in Piazza San Michele that you can visit.

Finale Ligure is situated on the Gulf of Genoa in the Province of Savona. Finale is well-known amongst outdoors enthusiasts, particularly climbers and mountain bikers, who make the most of the region’s mild weather in the winter months.

While in Finale Ligure, be sure to visit the old town of Finalborgo and the beautiful medieval town that’s teeming with outdoor sports stores, restaurants, and cafes. Or get active and enjoy some mountain biking, or climbing at the nearby crags around the town.

Colletta di Castelbianco is a small hamlet perched on the cliffside in Val Pennavaire. It’s worth visiting despite its small size as it’s part of Italy’s most beautiful villages.

The town was actually nearly abandoned but then it was redesigned and restored by designer Giancarlo De Marco who provided it with technological infrastructure so that residents can enjoy the peaceful surroundings while still being connected to the wider world. Nowadays, once you’ve driven up its winding roads, you’ll be hesitant to leave.

In Colletta di Castelbianco, there’s great climbing to enjoy on the town’s doorstep, as well as easy access to Val Pennavaire and the Ligurian pre-Alps for hiking and biking opportunities. 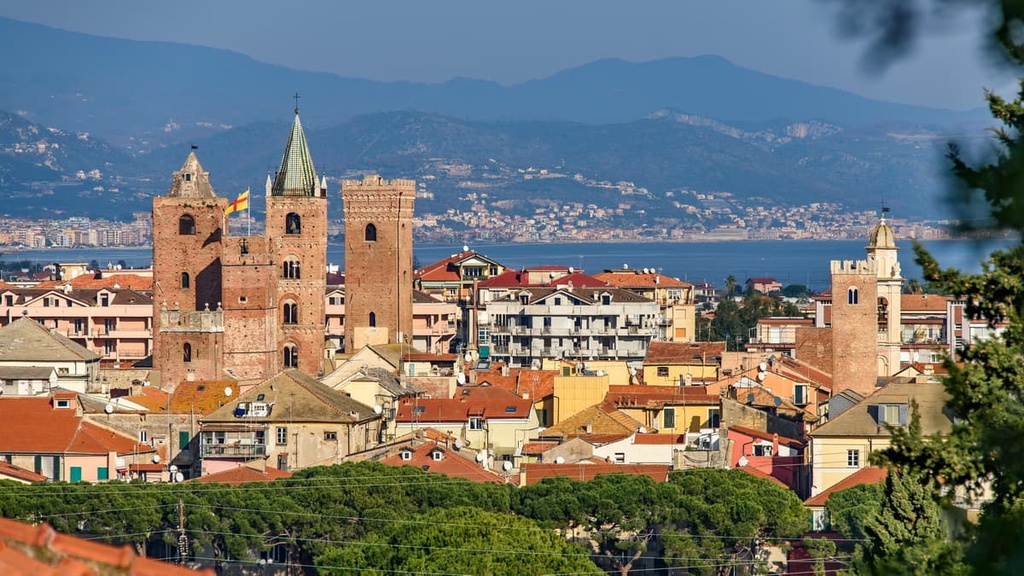 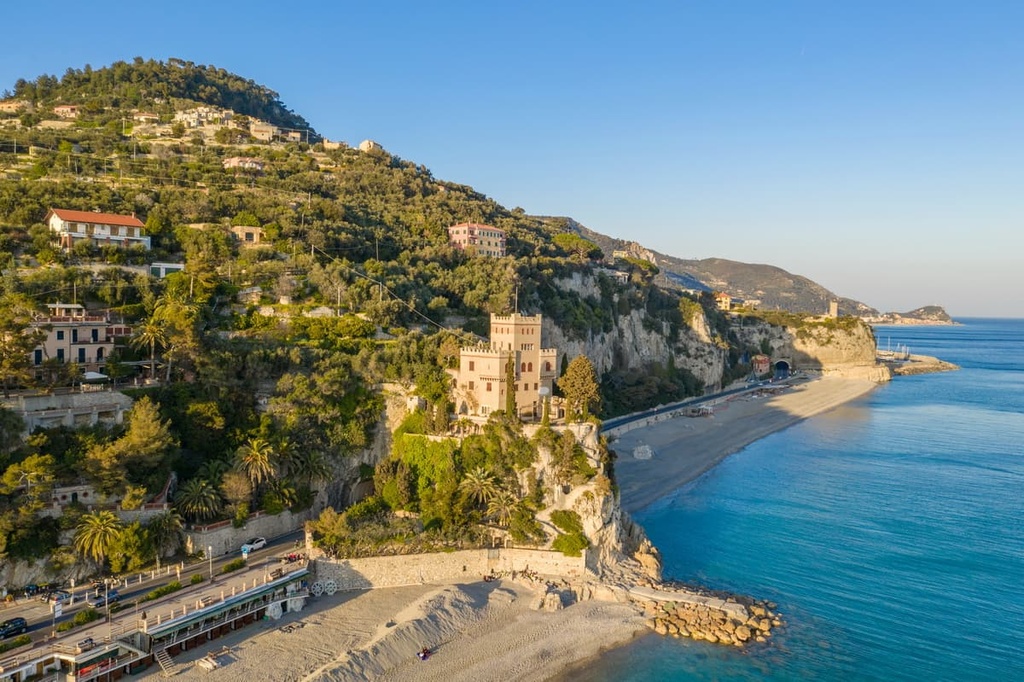 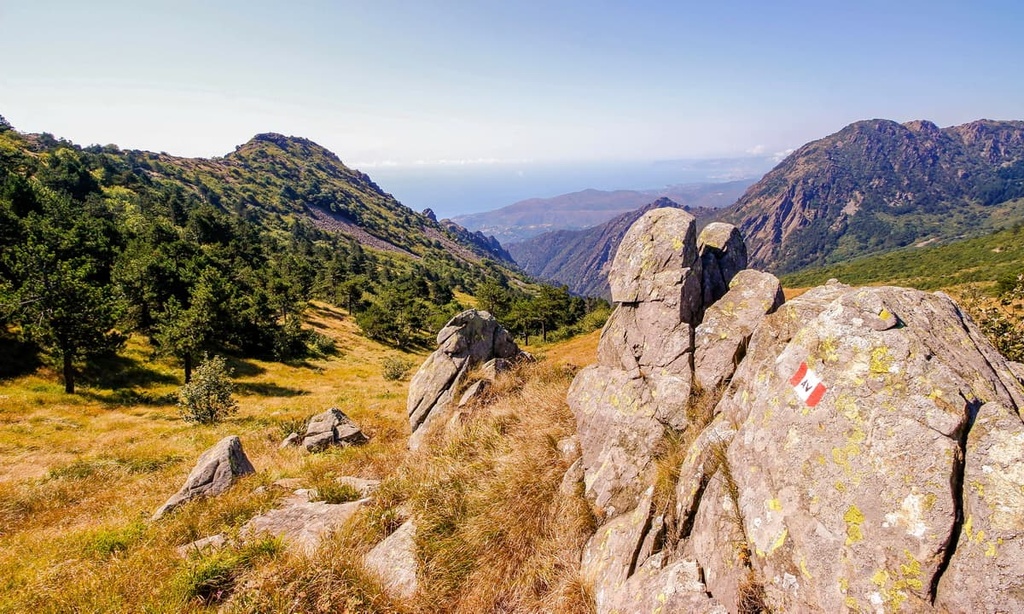 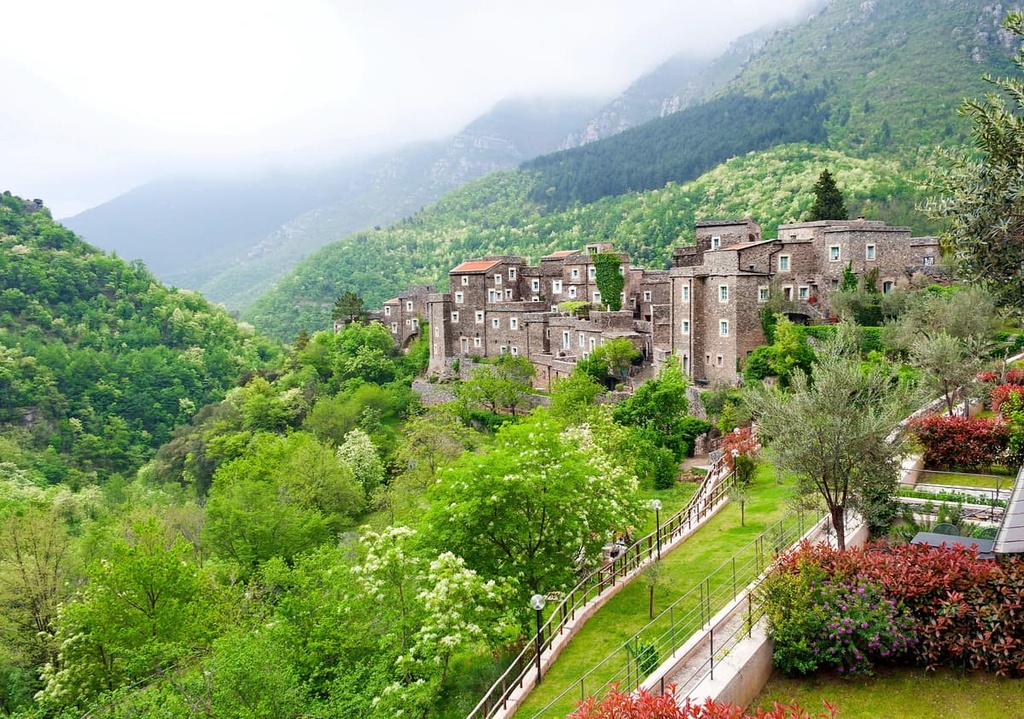 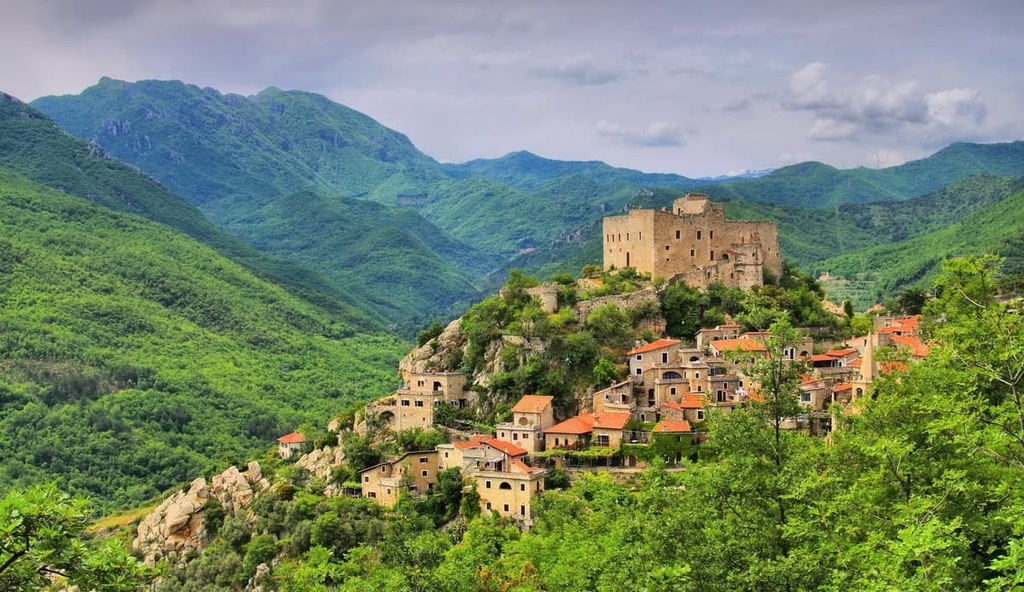 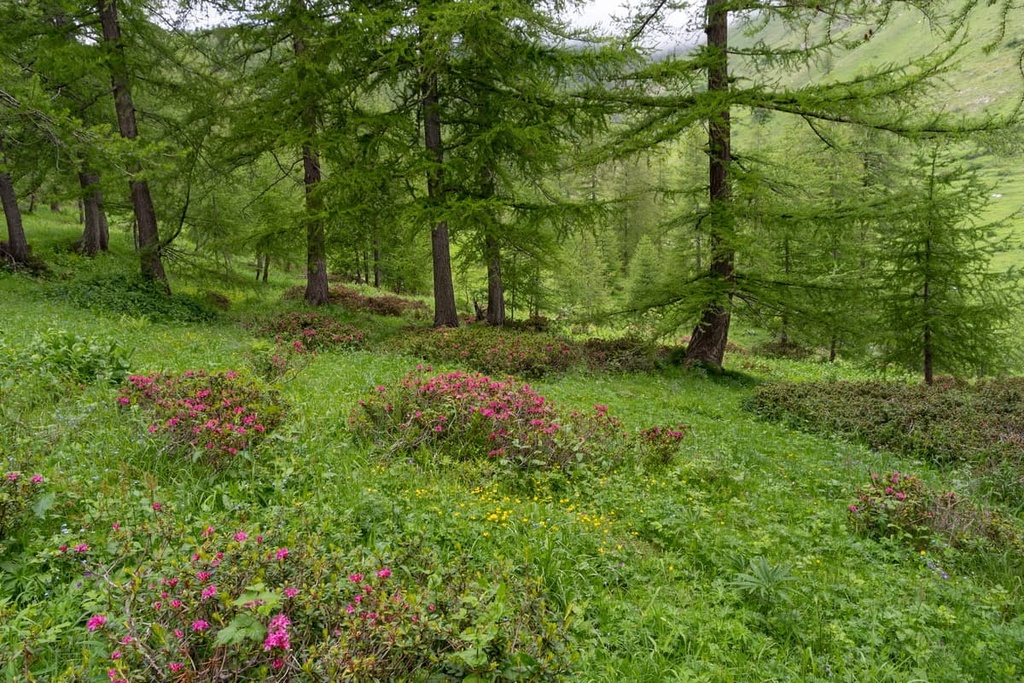 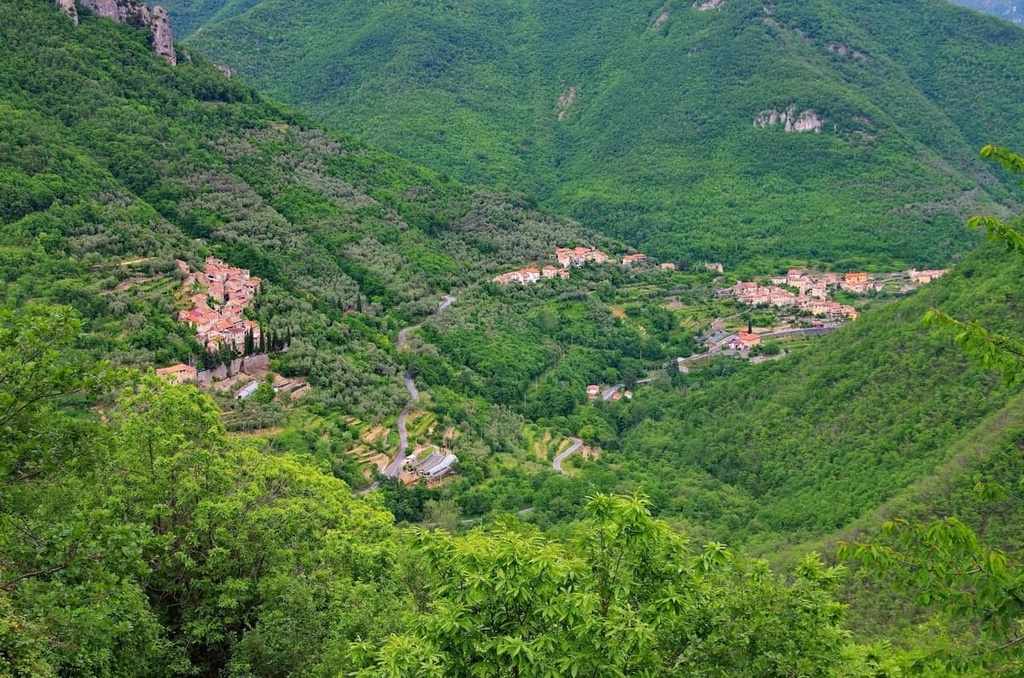