What is better, the beaches or the mountains? Why choose?! There are mountains by the beaches in Liguria! The picturesque sea, prominent peaks of the Alps and the Apennines with their delicious cuisine will blow your mind away. Liguria offers a perfect mix of all earthly pleasures imaginable.

There are 1965 named mountains in Liguria, which is basically a narrow strip of mountainous territory along the Ligurian Sea. The Alps’ Monte Saccarello (2,200m) on the border with France is the highest point of Liguria. But the Apennines Monte Maggiorasca (1,799m) located on the border with Emilia-Romagna region is its most prominent mountain.

There are less than a dozen mountains which are higher than 2,000 meters in Liguria and all of them are on the border with France. Yet, those rather humble altitudes of the Ligurian mountains are well compensated by epic coastal scenery and moderate climate all year round. This and a vast network of hiking trails make Italian Riviera especially attractive for outdoor activities. 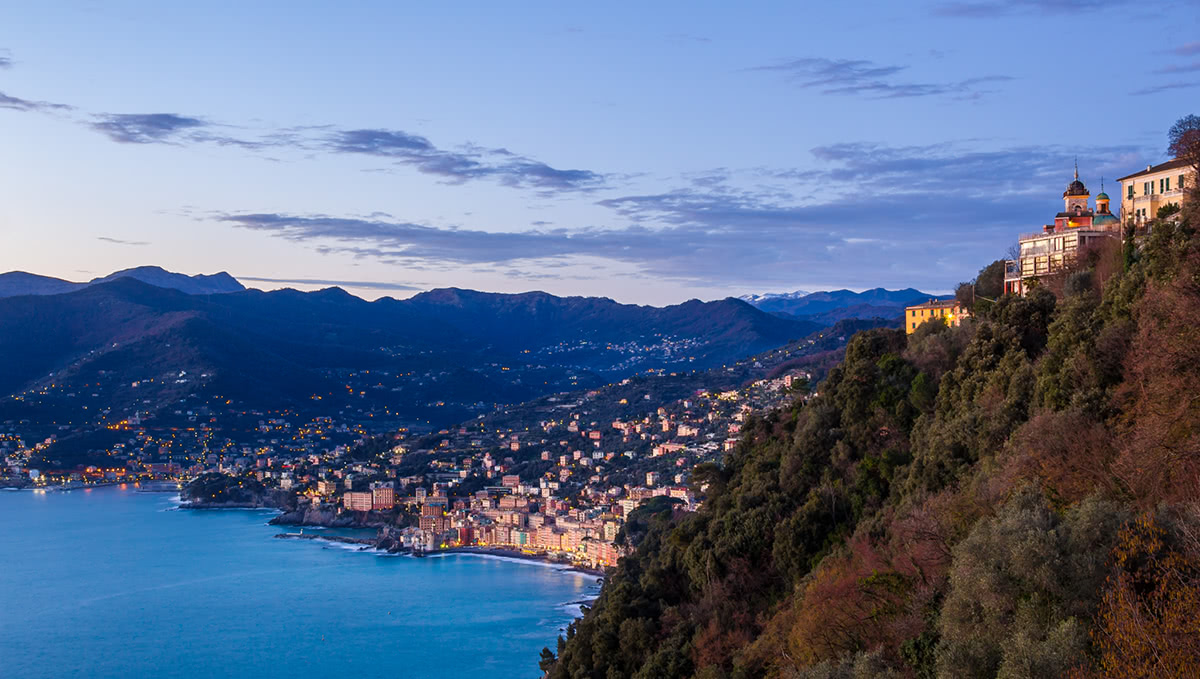 Thanks to mild Mediterranean climate Liguria is especially rich in varied vegetation. There are many villas and public gardens along the scenic coastline. One of the most exceptional places is the Hanbury Botanical Gardens located just 2 km off the French border in Capo Mortola promontory. The area was purchased in 1866 by a wealthy Thomas Hanbury after his return from China with an intention to organize acclimatisation gardens for exotic plants. Nowadays, a staggering variety of plants in these gardens allows observing something blooming any day of the year.

There are 4 provinces in Liguria:

Above the town of Alassio

In contrast to other Italian regions, there are special trail marks in Liguria. They aren’t the usual white-red CAI marks.Instead, you will see various shapes (circles, diamonds, lines, dots, etc). It might seem confusing but it is easy to use. The figures remain unchanged throughout the trail, so you basically just need to follow the same figure marks to reach the destination. Also, keep in mind that red colour of the figure indicates trails leading to the sea, while yellow-coloured marks appear on the trails leading to the Po valley.

A view from Monte Bignone above Alassio

There are many hiking trails of various skill level and thematic interest. Scenic coastal trails, panoramic trails, alpine climbing routes, you name it. On a clear day, one can see the greatest Alpine peaks such as Monviso and Matterhorn in the north, even rocky peaks on the island of Corsica! Here is our short list of the most fascinating routes. For the purpose of simplicity, we listed them from west to east, so don’t judge the importance or the beauty of the trail by its position in the list.

Monte Saccarello - the top of Liguria

Being the highest point of Liguria and located right on the border between Italy and France Monte Saccarello offers incredible panoramic views. It takes about 3 hours to reach Monte Saccarello summit from a parking area in Verdeja. Those interested in a longer excursion can hike farther north along the ridge to Monte Bertrand for a better view of the highest peak of the Ligurian Alps section - Punta Marguareis (2,651m) - and the whole jugged Marguareis group.

Slightly south of Monte Saccarello, and in fact, reachable from it via a state border ridge walk in about 3 hours, there’s a relatively new Ligurian Alps Nature Park. It might be more convenient to start a walk from the parking area at Colle Melosa though.

The most popular excursion in the park is a short hike to Monte Grai with the convenience of a nearby mountain hut (Rifugio Monte Grai). It takes about one hour and a half to reach the summit from the parking area.

A highlight of the park is the dolomitic peaks of Monte Toraggio and Monte Pietravecchia. They are sometimes referred to as the Ligurian Dolomites. There’s a loop trail which goes near the ridge from Rifugio Monte Grai to Monte Pietravecchia and then to Monte Toraggio. There you can take the infamous Sentiero Degli Alpini carved in the fragile rocks of those mountains just above the abyss with signs of enormous past rockslides. The trail being a subject to regular rockslides and technical closures can be over the limit for an ordinary hiker. Please, carefully check the indications on the trail in order to understand the conditions of the route and never brave it if you feel unfit for the challenge.

Here’s an interesting fact, Monte Pietravecchia bears a record of a kind, as it is the closest to the sea mountain which is over 2,000 meters tall.

Less known yet not less spectacular and entertaining is a day-long excursion from Santuario della Madonna del Lago above Alto to the summit of Monte Galero. Apart from scenic panoramic views all way long, there are impressive stone formations, the so-called Stone Giants (Italian: Giganti di pietra del Monte Galero). The trail is almost 17 km and takes about 8 hours roundtrip.

The largest nature protected area in Liguria is designed to preserve the geological history of the region. Due to its exceptional geological heritage, it was recognized as a UNESCO site and included in the prestigious list of the UNESCO Global Geoparks.

The park boasts of a huge territory with exceptional panoramic views. The deep azure Ligurian sea, bustling Genova, scenic mountain chains, it has all the elements to satisfy even the most fastidious taste. Our suggested itinerary for a first impression is an easy (at least in good weather) hike from Monte Reixa to Monte Beigua or vice versa. These are probably two of the most famous mountains in the park. It takes 3 hours to walk one way and there are mountain huts near the summits, as well as in between (rifugio Argentea near Monte Argentea and rifugio Pratorotondo).

The province of Genova, with numerous forts and other defensive structures, is one of the most challenging for enemy invasions. There are many itineraries which allow you to explore this part of history. The city itself is encircled by “New Walls” (Mura Nuove). The “new” here means built in circa 1600, just 400 years ago. In order to preserve the area, the Park of the Walls (Parco delle Mura) was established in 2008.

There are many itineraries available, by foot or by bicycle, with restaurants along the way. You could start from the Righi funicular top station and walk to Forte Begato in about an hour, then make a long 9km loop through Monte Diamante with Forte Diamante (built in 1758) at the summit.

A huge rocky promontory between the resorts of Camogli and Rapallo is designated as Portofino Regional Park. At the southern tip, there’s world famous Portofino village famous for its picturesque harbour (see the photo below) and popularity among celebrity and artistic visitors. But the village of Portofino is just the start of a breathtaking journey. The promontory is well covered by a vast network of trails. Also, there’s a good and convenient bus service between Camogli, Rapallo, and Portofino.

Our suggested itinerary is a walk from Portofino to San Fruttuoso Abbey, which is about 6km long and takes almost 2 hours. Relaxing on a beach and a delightful lunch will recharge your batteries for the next section from San Fruttuoso Abbey to Camogli. There are many flights of steps along the way but the scenic viewpoints are totally worth the effort!

Probably one of the most famous parts of Liguria is the Cinque Terre, a coastal area in the province of La Spezia. It comprises five villages: Monterosso al Mare, Vernazza, Corniglia, Manarola, and Riomaggiore. They are designated as the Cinque Terre National Park and a UNESCO World Heritage Site. Probably, no visit to Liguria is complete without a hike through the Cinque Terre.

There are two popular routes to appreciate the beauty of the place:

Interested in something more epic? There’s a trail for you! Alta via dei Monti Liguri is a 440km (270 miles) - long route from almost at the French border in Ventimiglia to Ceparana in the La Spezia province. The standard duration is 44 days but it could be done faster if your vacation is shorter than that. Also, there’s nothing wrong in doing just some sections of this amazing trail.

In fact, the whole Ligurian coast is one big resort. Here are several hubs which you are most likely to arrive to or at least travel through.

Genova, the capital of Liguria, sits right in the middle of the Italian Riviera and divides it into two parts - Riviera di Ponente (sunset - western part), and Riviera di Levante (sunrise - eastern part).

The birthplace of Christopher Columbus, Genova is a huge transport hub in the area. It has the biggest port in Italy and the only international airport in the region. Almost all visits to Liguria go through Genova, whether by plane, train, boat or car.

The centre of a homonymous province Imperia was formed during the fascist time by combining Porto Maurizio and Oneglia with other communes. Nowadays, it is famous for the cultivation of flowers and olives and is a popular summer destination. Being close to the French-Italian border brings some additional advantages. Staying in Imperia, you can venture on day trips to Monaco and Nice.

La Spezia is one of the main Italian military and commercial harbours and a major Italian Navy base. But what makes this city especially attractive is a fairy-tale church of San Pietro on a rocky outcrop and Palmaria island, which is a UNESCO World Heritage Site (together with Cinque Terre).

Arguably, the most spectacular route is from San Pietro church going up to Monte Muzzerone and then to Monte Castellana. Both mountains are crowned with forts and the trail is rich with dramatic viewpoints high above the sea cliffs. 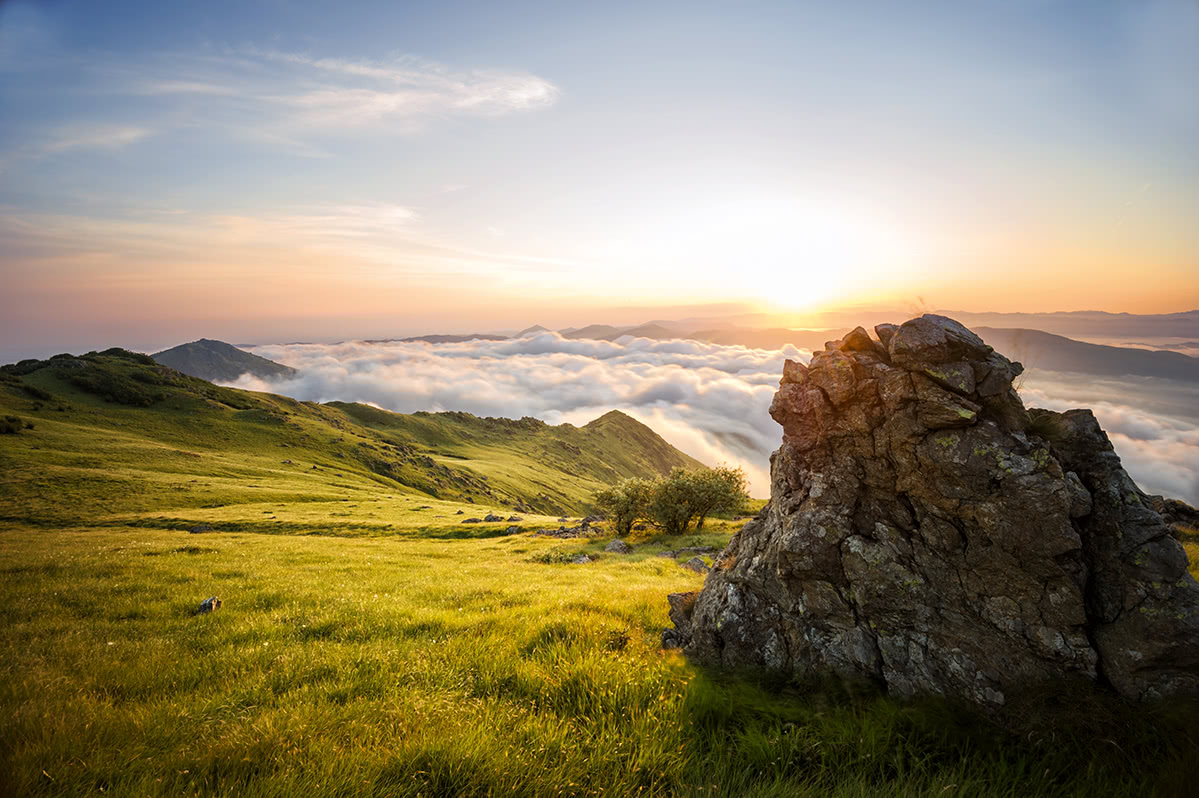 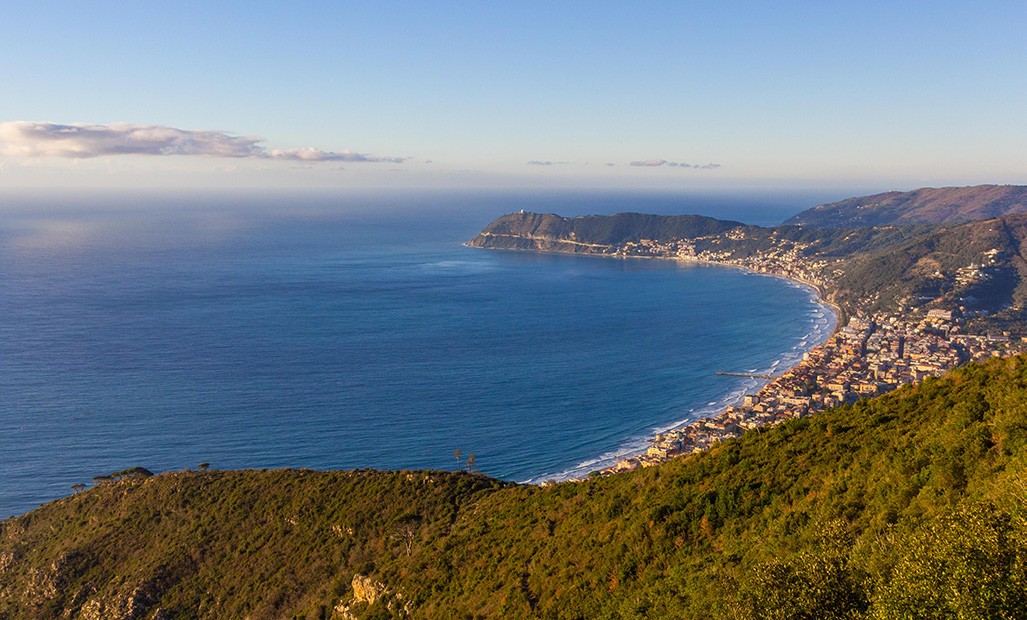 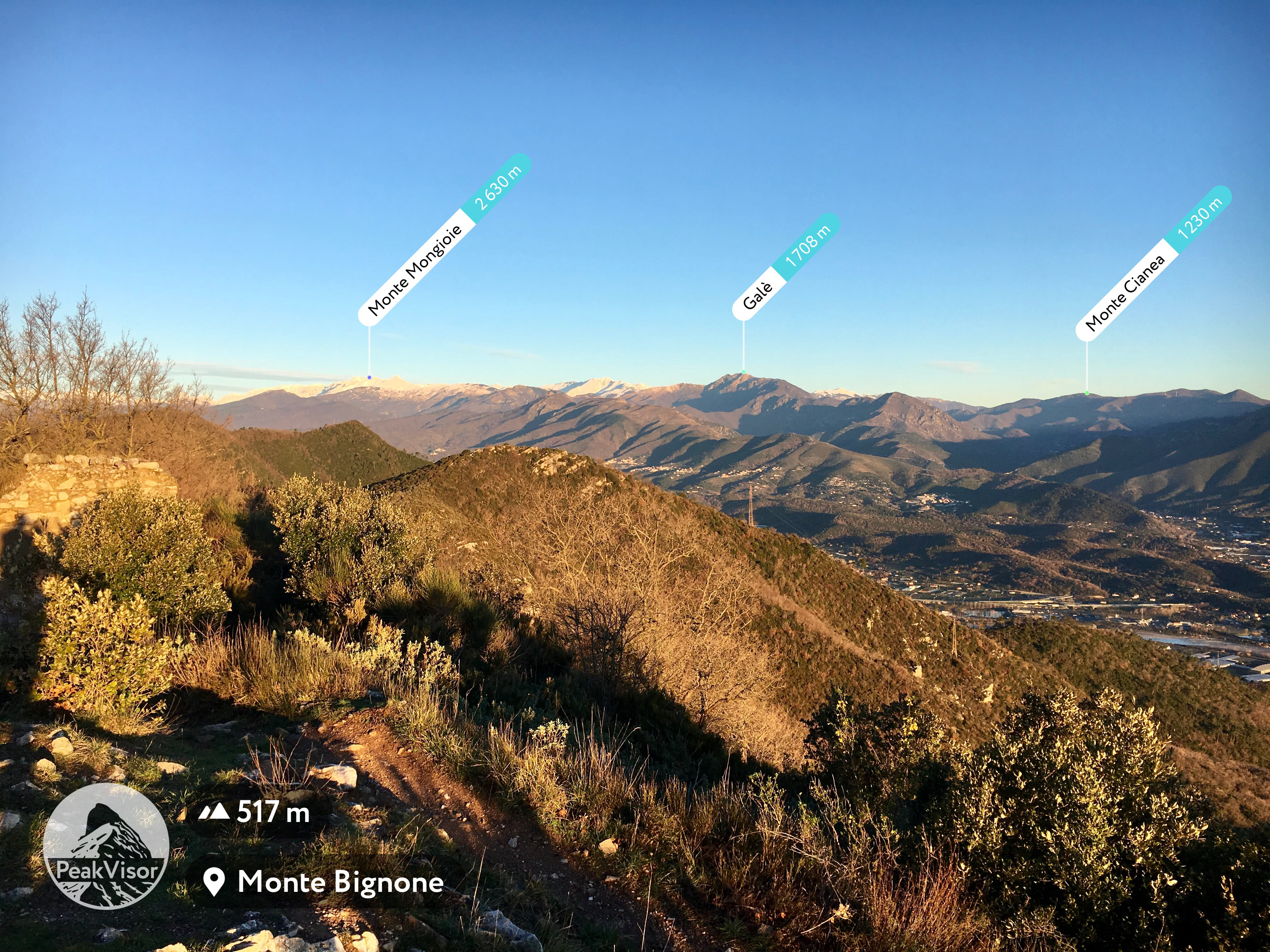 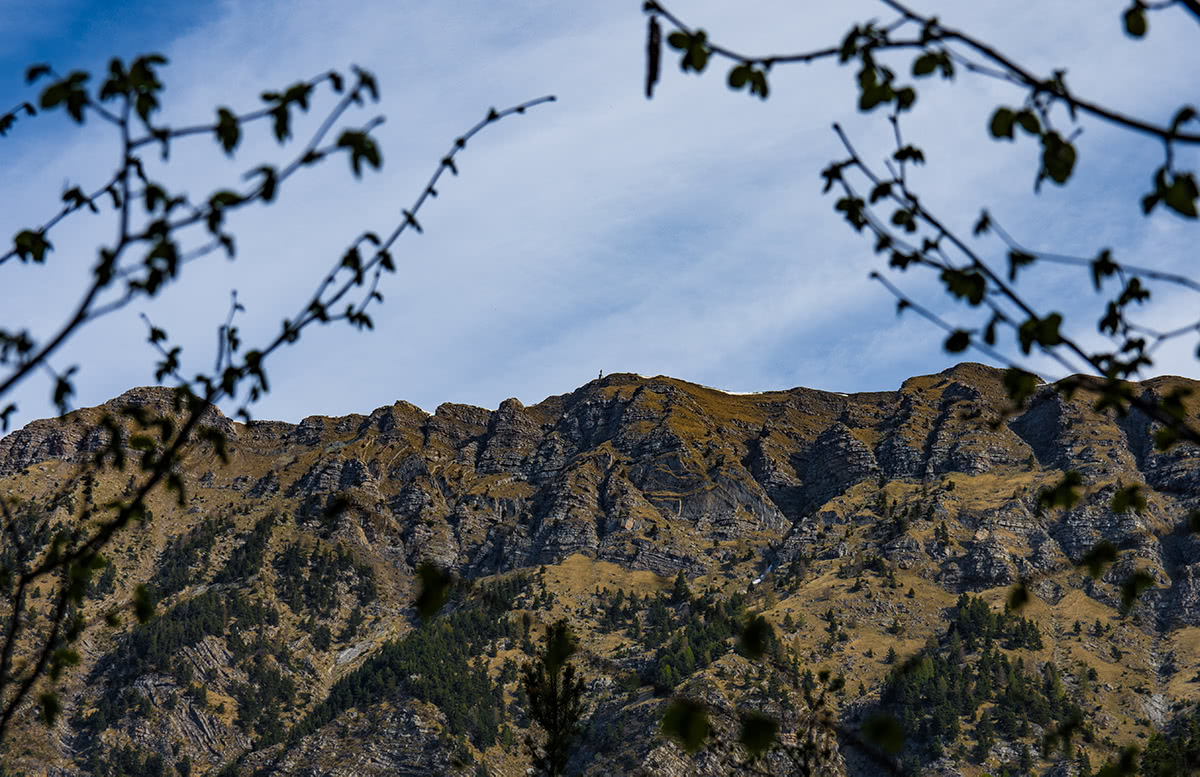 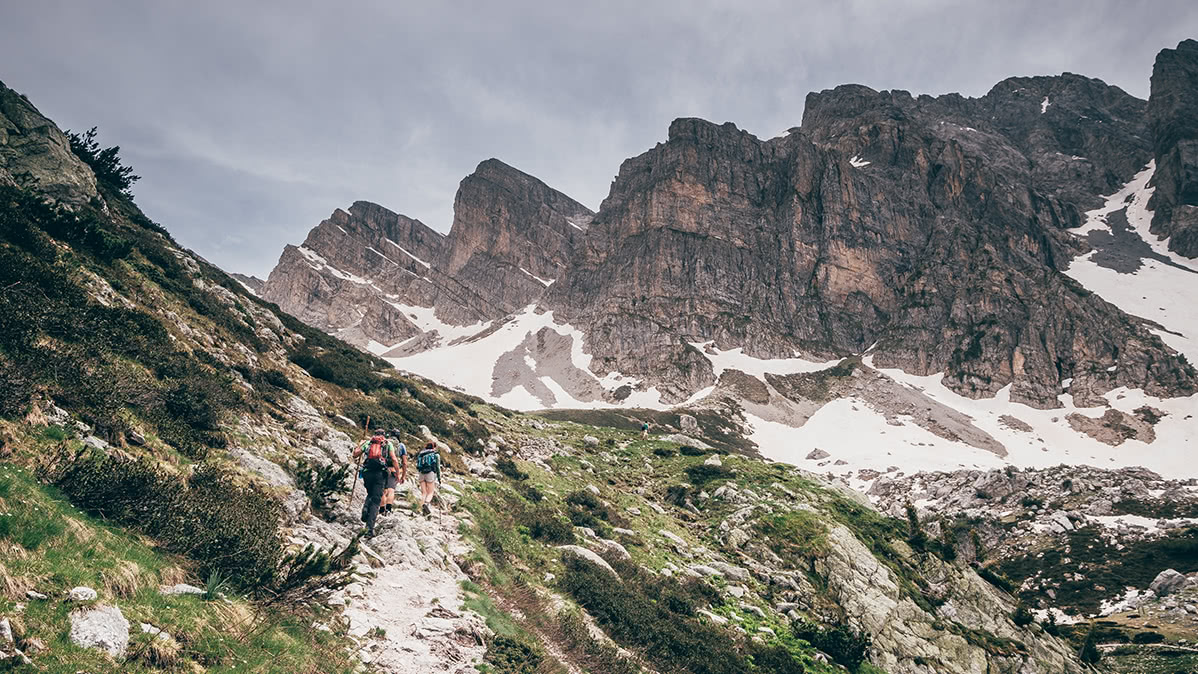 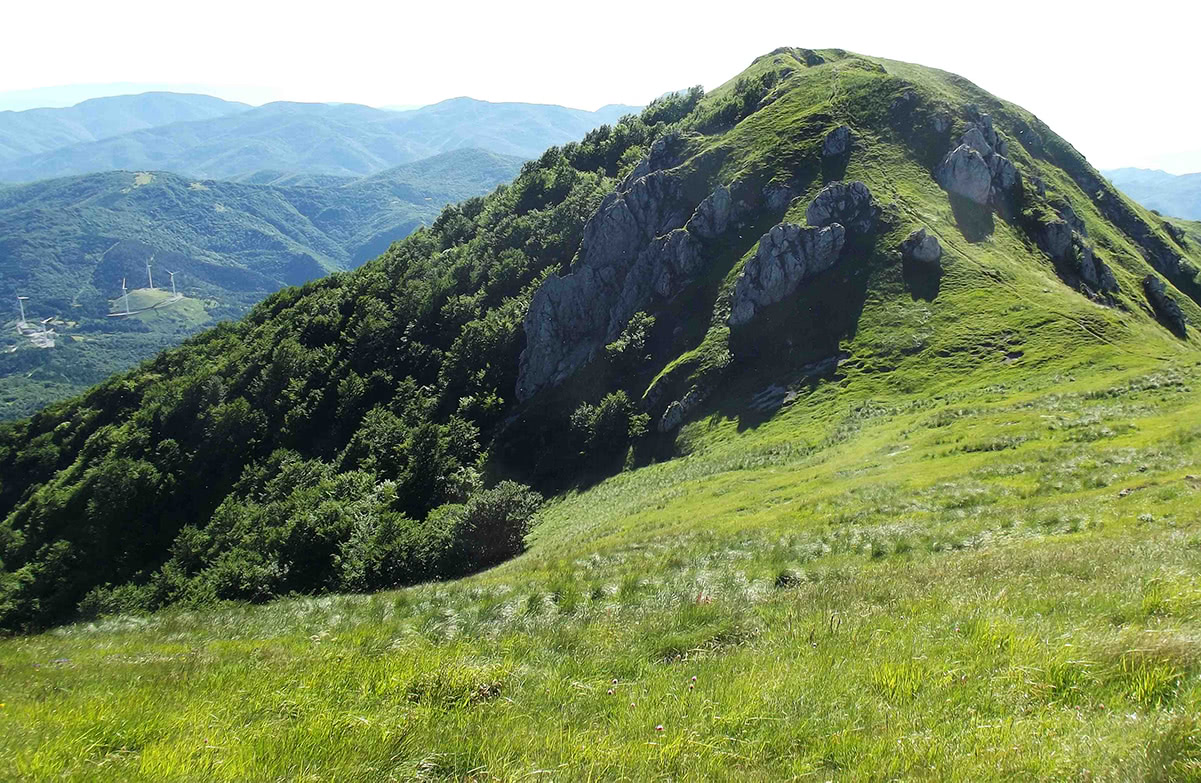