Jotunheimen National Park (Norwegian: Jotunheimen nasjonalpark) is situated in the Jotunheimen region of north central Norway. Known as the “Home of the Giants”, the national park is home to 351 named peaks. The tallest and most prominent peak in the park is Galdhøpiggen at 2,469 m (8,100 ft) tall with 2,436 m (7,992 ft) of prominence. 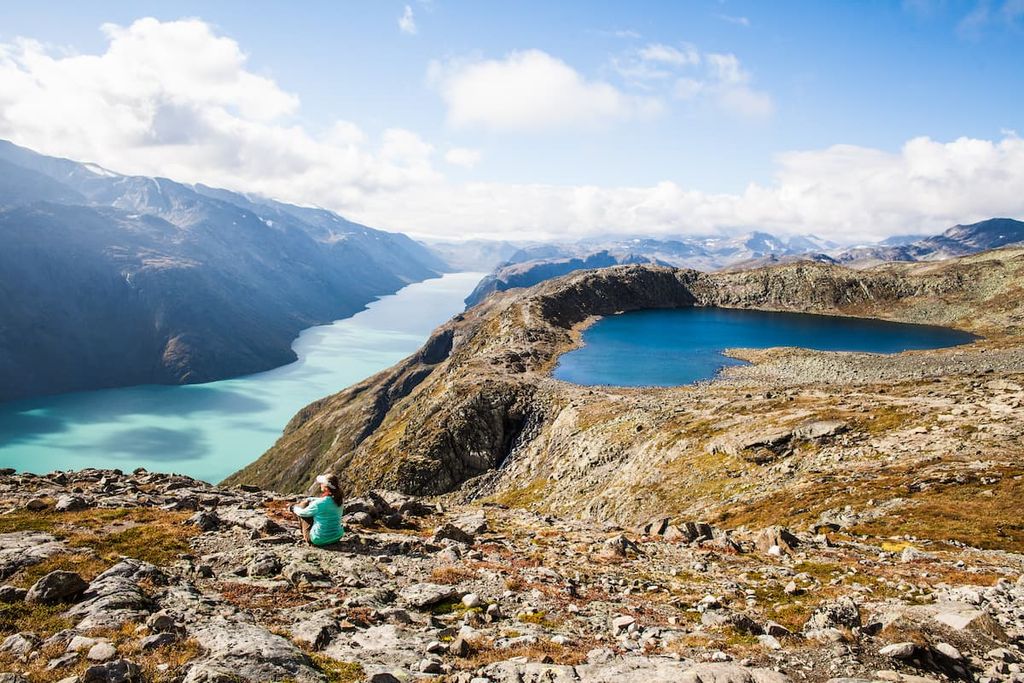 Jotunheimen National Park spans across the mountainous region of Jotunheimen from which it derives its name. The park boasts over 250 mountains above 1,900 m (6,234 ft) including Galdhøpiggen, the tallest mountain in northern Europe.

Geographically, the national park lies within Vestland and Innlandet counties of Norway. Jotunheimen National Park features some of the most stunning natural landscapes in the country, and all of northern Europe.

Alpine and glacier fed lakes are scattered throughout the mountainous region. Major lakes in the park include Gjendevatnet lake, situated at 984 m (3,228 ft), and Bessvatnet lake at 1,373 m (4,505 ft). Rivers such as Storutla and Muru, along with countless creeks and streams, connect the plethora of lakes and ponds.

Hillsides rise steeply from the lakeshores often featuring rocky terrain and low growing flora. Rocky scree fields and technical peaks mark the highest elevations, while many of the peaks contain snow coverage throughout much of the year.

Prominent natural features include the Besseggen ridge near Beitostølen, lush alpine meadows, the slopes of Gudbrandsdalen, the valley of Valdres, and the Jostedalsbreen glacier. Wooden huts, cabins, and lodges are scattered throughout the park, providing visitors with the option for sleeping accommodations.

Jotunheimen National Park lies between Oslo, Bergen, and Trondheim, and boasts some of the most famous hiking trails and peaks in the entire country. Visitors can witness waterfalls cascading down the dramatic and rocky cliffs throughout the year.

The peaks and ridgelines found within Jotunheimen National Park are part of the greater Scandinavian Mountains. This range extends throughout the countries of Norway, Sweden, and parts of Finland.

All of these mountains (including Galdhøpiggen, the tallest peak in the park and the country) were formed during the Caledonian orogeny. This major mountain building period took place roughly 490-390 million years ago.

Widespread glaciation and glacial retreating carved out much of the landscape visible today. As the glaciers retreated the sweeping valleys were carved, leaving behind the dramatic changes in elevation. Alpine lakes showcase remnants of the once vast glaciers and icefields of the region.

A majority of the massifs consist of hard gabbro igneous rock. The Caledonian rocks that define the region have been thrust over older rocks in the region. Continual erosion has revealed Precambrian rock in parts of the national park.

Flora and fauna found in the national park is similar to that found throughout the arctic regions. Glacier crowfoot marks the highest growing flowering plant in the area, thriving at elevations of 2,370 m (7,776 ft).

Other common flowers include purple saxifrage and rose-root. The rocky slopes of the park support a variety of lime-loving plants including sweet little mountain avens.

A majority of the national park lies above the timberline, with minimal trees throughout. Along the shores of Lake Gjende grow patches of mountain birch. Near Utladalen lie populations of mountain birch, elm, mountain pine, black alder, and hazel.

Larger animals include elk, reindeer, deer, roe, marten, and mink. Visitors may also spot wolverines, lynx, and foxes. Most of the lakes and rivers contain a variety of trout and fishing is welcome throughout most of the park.

Birds such as golden eagles, grouse, and gerfalcon are common throughout Jotunheimen National Park.

The land within and surrounding the Jotunheimen National Park has been inhabited by humans for thousands of years. Remnants of hunting camps have been found near Gjende and Russvatnet, dating back as early as the Stone Age.

Other settlements found in the area date back to the Bronze Age and the Iron Age. This mountainous region is home to an ancient trade route. The original route began in Sunnmøre and traveled through Lom and Skjåk. Those making the long and strenuous journey would then travel down the Gudbrandsdalen valley in order to arrive in eastern Norway.

This route was used for centuries for trading fish, salt, and grain. As trade continued, small settlements began growing throughout the mountains. Many of the early settlements were centered around the lakes in the region, near a well traveled mountain pass.

During the fifteenth century, a “Royal Road” decree required residents of Lom to ensure that the mountain passes were kept clear for travel. Those making the journey regularly traded cloth, iron, salt, and lutefisk.

The region wasn’t named Jotunheimen, or “Home of the Giants” until the 1800s. During this time the Norwegian poet Aasmund Olavsson Vinje coined the term which is used to this day. In 1909 a memorial was dedicated to Vinje along the western edge of Lake Bydgin, which now lies on the outskirts of the park.

One of the distinct features of the national parks in Norway are the hut that hikers can use during backpacking trips and overnight stays. The first in the park was built in 1869 along the shores of Lake Tyin. Today Eidsburgarden acts as a mountain tourist center for the region.

In 1980 the Jotunheimen National Park was established by Royal Decree. The park was established to help further protect the natural features of the region. Today, visitors have the right to roam throughout Norway, ensuring free access to all national parks unless otherwise posted.

The Jotunheimen National Park is home to some of the most spectacular hiking trails in the entire country. With seemingly endless trails and alpine lakes to explore it can be difficult to decide which ones to choose. Below are a few of the most popular hiking routes in the park:

The Besseggen Ridge route is one of the most well known hiking trails in the park and the entire country. The main hiking route begins in Memurubu and climbs steeply away from the town. After climbing steadily, hikers reach the infamous narrow ridgeline that separates Gjende and Bessvatnet.

Hikers can continue to take in the stunning views as they climb up and over Veslfjellet, which marks the tallest point on the route. The trail then descends a kilometer down to Gjendesheim. The point to point trail is 13 km (8 miles) in length and features roughly 1,300 m (4,265 ft) of elevation gain.

The Bitihorn hike lies 1,607 m (5,272 ft) above sea level and is one of the easier hiking routes in the national park. Hikers begin at the Bygdin hotel and climb steadily along the grassy hillsides surrounding the lake.

From the top of the trail, hikers are greeted with one of the most popular viewpoints in Valdres. Hikers can turn around here or continue up to the summit of Svarteknippa. From Bitihorn to Svarteknippa there is no designated trail and the route becomes steeper and more rocky. This out and back trail is 10 km (6.2 miles) long and features 600 m (1,969 ft) of elevation gain.

This point to point trail begins in Memurubu and climbs westwards up to Memurutunga, a mountain plateau. During the ascent hikers have views of lake Gjende and continued views of various lakes throughout the stretch along the plateau.

After crossing the plateau, the trail begins to descend down to Gjendebu. Here hikers will find the steepest sections of the hike, which feature wire or chains to help make the descent safer. This point to point trail is 10 km (6.2 miles) long and features 760 m (2,493 ft) of elevation gain.

Looking for a place to stay near the Jotunheimen National Park? Here are some of the best cities and villages to check out in the region:

Situated in the stunning mountains of Norway, the municipality center of Lom is a gateway to many of the major national parks including Jotunheimen, Breheimen, and Reinheimena. The National Park Village is home to around 2,350 residents and is situated at the base of Lomseggen.

The river Bøvra runs through the center of the village throughout the year. During the summer months the population swells with tourists ready to explore the surrounding terrain. The quaint village features local restaurants, bakeries, museums, and a stave church dating back to 1150. Lom is an ideal starting point for those wishing to explore the national park.

The town of Otta lies east of the national park is the Sel Municipality in Innlandent county. Home to around 2,300 residents, Otta lies at the confluence of the Gudbrandsdalslågen and Otta rivers. Situated in the Ottadalen valley, the Rondane mountains extend to the southwest.

Rondane National Park lies just outside the town and marks the country’s first national park. The town is known for its close proximity to the surrounding national parks and features numerous hotels and campsites. Other sites in Otta include the Milorg hideout of Reiret and a Battle of Kringen monument. 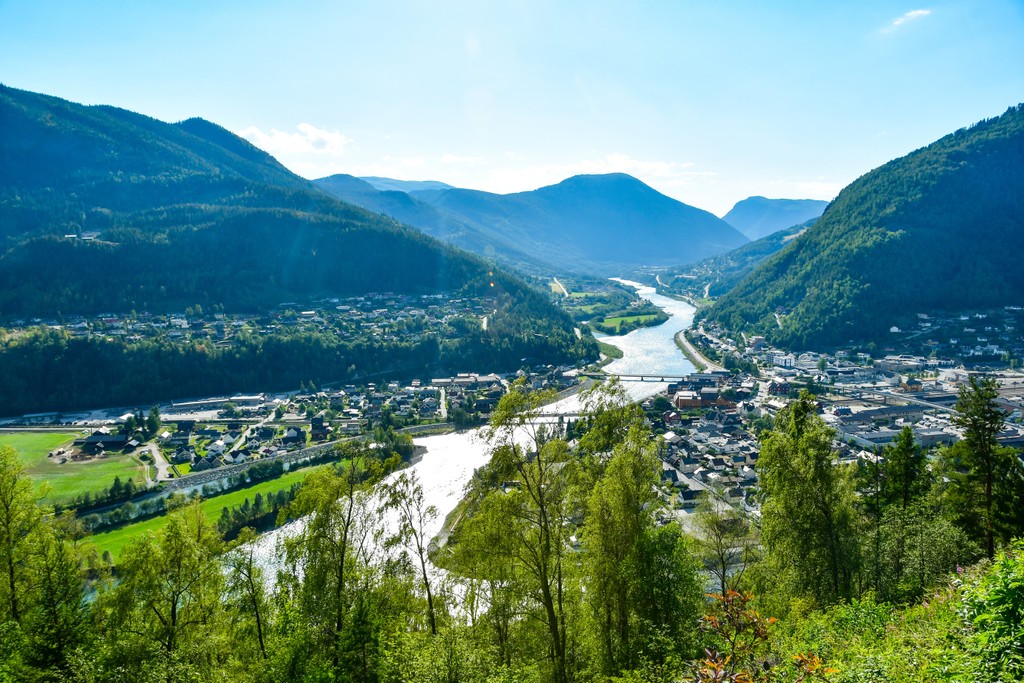 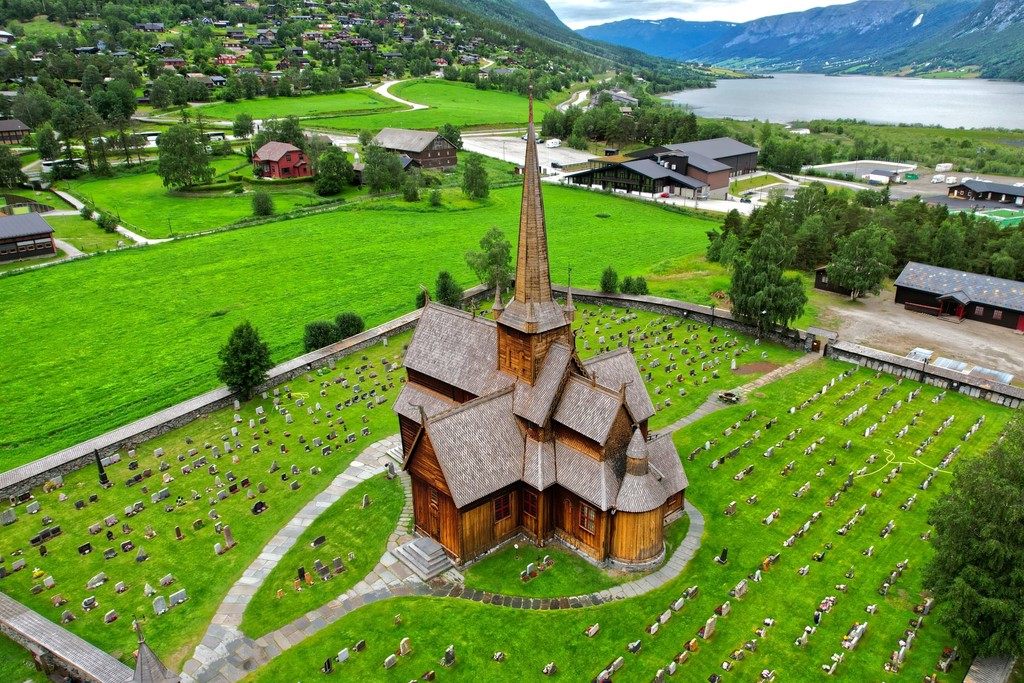 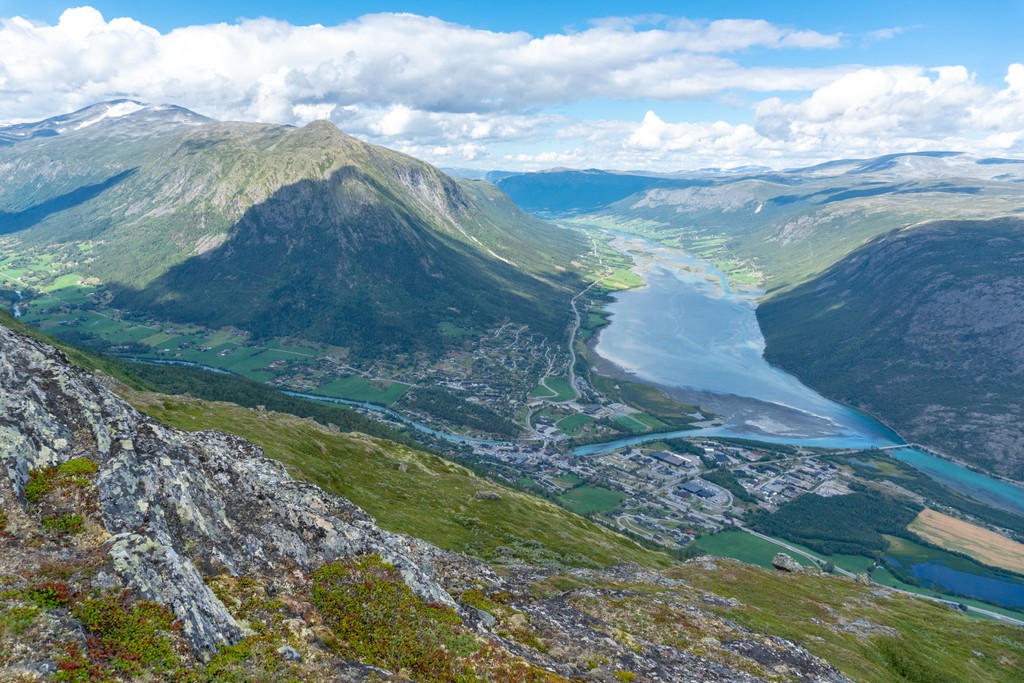 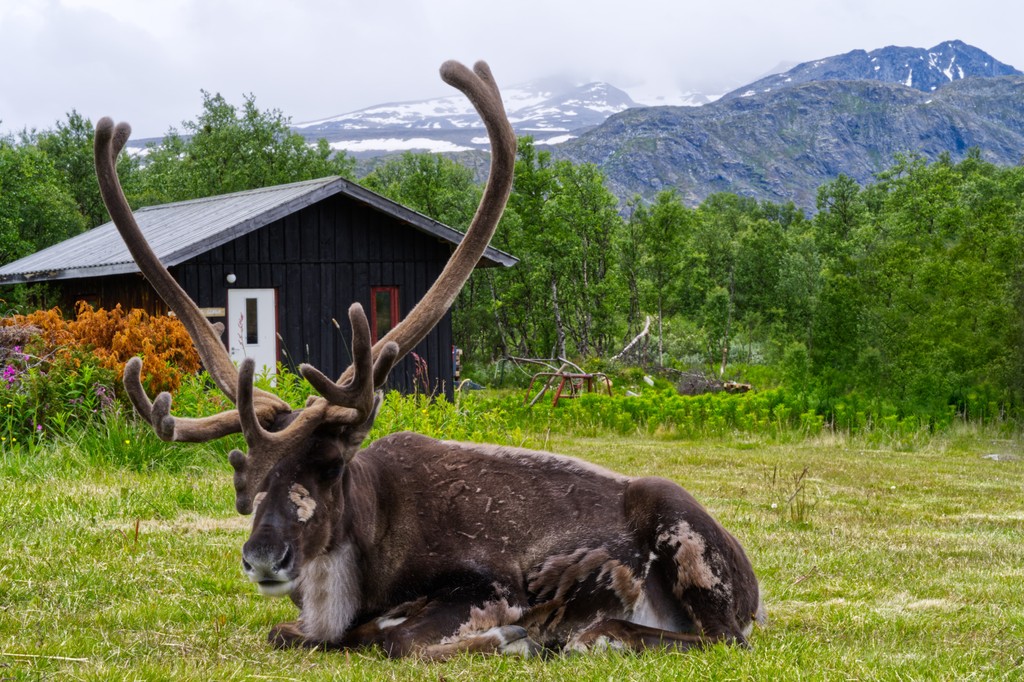 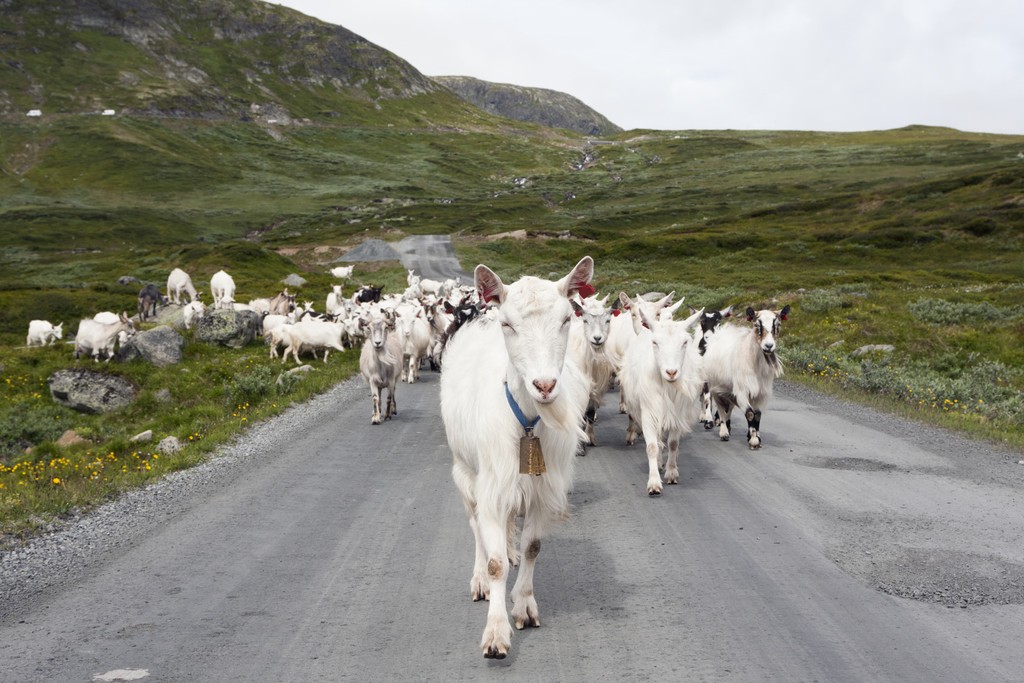 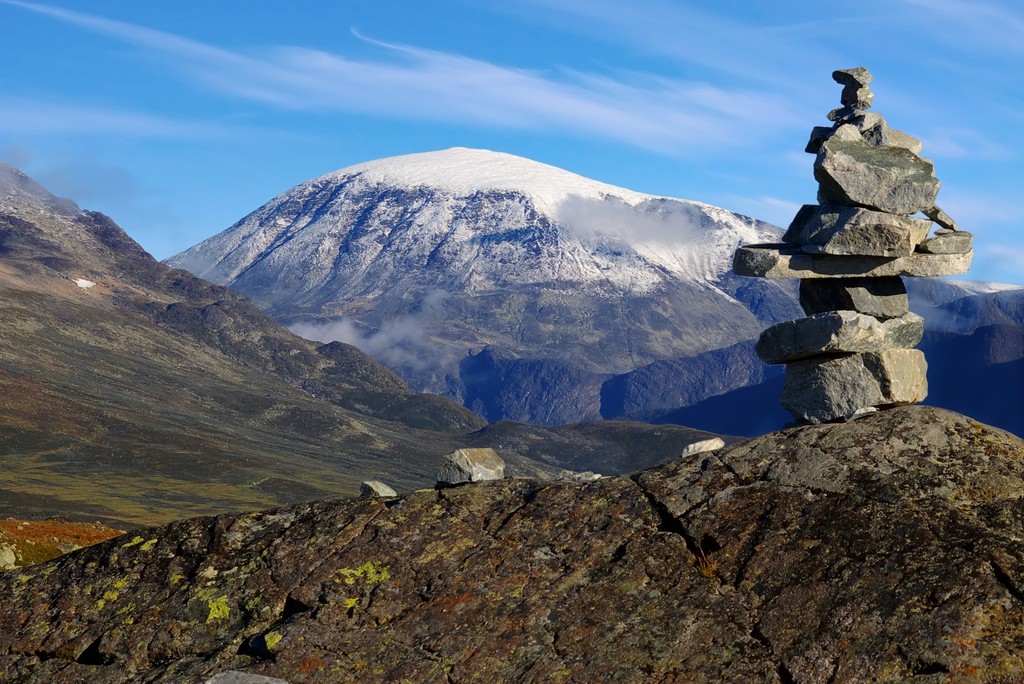 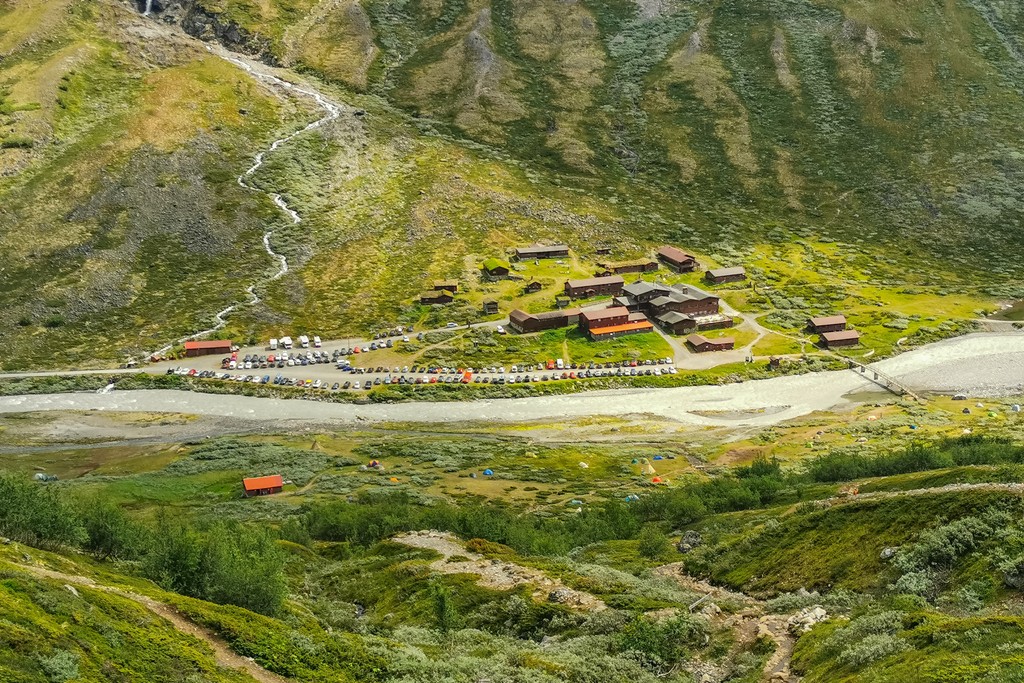