2 373 m
Elevation
Elevation is the altitude of a place
above sea level.

276 m
Prominence
Peak’s prominence is the least
vertical to be covered to get from the
summit to any other higher terrain.

Proportional Prominence 1 814 m
Location
61.633265 N  8.265198 E
Skarstind (official form on maps: Skardstinden) is a prominent part of the Galdhøpiggen mountain range in northwestern Jotunheimen, Norway, and is the sixth highest summit in the country. The mountain has three summits, the main summit at 2,373 meters above sea level, Nåle, the Needle, at 2,310 m and the small western summit at 2,215 m. It is located within the municipality of Lom, (in Oppland) on the eastern side of the Leirdalen valley, and the summit can be seen from the road along the valley floor. There are several other peaks in the vicinity, but only Galdhøpiggen, a few kilometers to the east, is higher. The mountain can be seen from most of the higher peaks in Jotunheimen and Breheimen to the northwest.

The first part of the name Skarstind is one of the Norwegian words for mountain pass, although it is impossible to say which pass has given its name to the mountain. It might be the pass to the south or it might be the pass between the summit itself and the pinnacle, Nåle. Nåle, the Needle, has got its name from the local word for pinnacle, which describes the shape of it.

The summit was reached for the first time in 1884 by Severin Wleugel, Sig. Thor, Oskar Kristiansen. The first ascent of the two lower summits remains unknown, but it is probable that they were climbed at the same time.

The views, except towards the east, where Galdhøpiggen blocks the view, are among the best in Jotunheimen. To the west, you see the Smørstabbtindene range, the Hurrungane range and the Jostedalsbreen glacier. To the northwest you see the Hestbrepiggane range and to the south you see most of the summits in central Jotunheimen.

The shape of the mountain is extremely characteristic. Only from northwest does it look like a 'tind' a high pointy summit in Norwegian. From the east, from Galdhøpiggen, it shows its steep wall with Nåle balancing on the left flank, as seen in the table. This wall is one of the more inaccessible in Jotunheimen and is climbed rarely. The southwest face is less forbidding, and it is possible to find a way up through the partly snow-covered talus slopes. The mountain, as its neighbors, consists of the hard gabbro rock, which withstands erosion better than most other rocks. The orientation of the layers of gabbro in Skarstind is uncommon. Normally they rise from northwest towards southeast, which is why many summits are easiest to reach from the north side. At Skarstind the layers rise from southwest towards northeast. This is easily seen on the photo in the table.

The summit can be reached without equipment if the conditions are good and there is very little snow on the talus slopes on the southwest face. The normal ascent starts from Leirdalen up to Dummhøe, which is an easy, but rather steep climb of more than 1000 meters. Up to approximately 1500 meters, there is a path, made by sheep and goats, and used by mountaineers, but from there one has to follow the ridge up to Dummhøe, which is more of a small plain than a mountain. The plain is followed up to the summit of Western Skarstind, but from that small summit you can see the difficult west wall of the main summit.

There are four small walls to climb, but they may all be outflanked on the right side if the conditions are good. From the Western summit the flank seems nearly as forbidding as the wall itself, but at a close distance it is not too difficult and no equipment should be necessary. However, on poor conditions, the Talus may be very loose and great caution is advised. On days with fresh snow, like the last picture, equipment will probably be necessary on all routes.

Nåle seems to be very difficult, but it is much easier than the summit itself.

Skarstind is quite popular, given the mountain's high rank among Norwegian peaks; on most days during the short summer season peakbaggers climb the mountain, but the summit is hardly ever crowded. A winter ascent is only for the very experienced.
There's a trail leading to the summit. 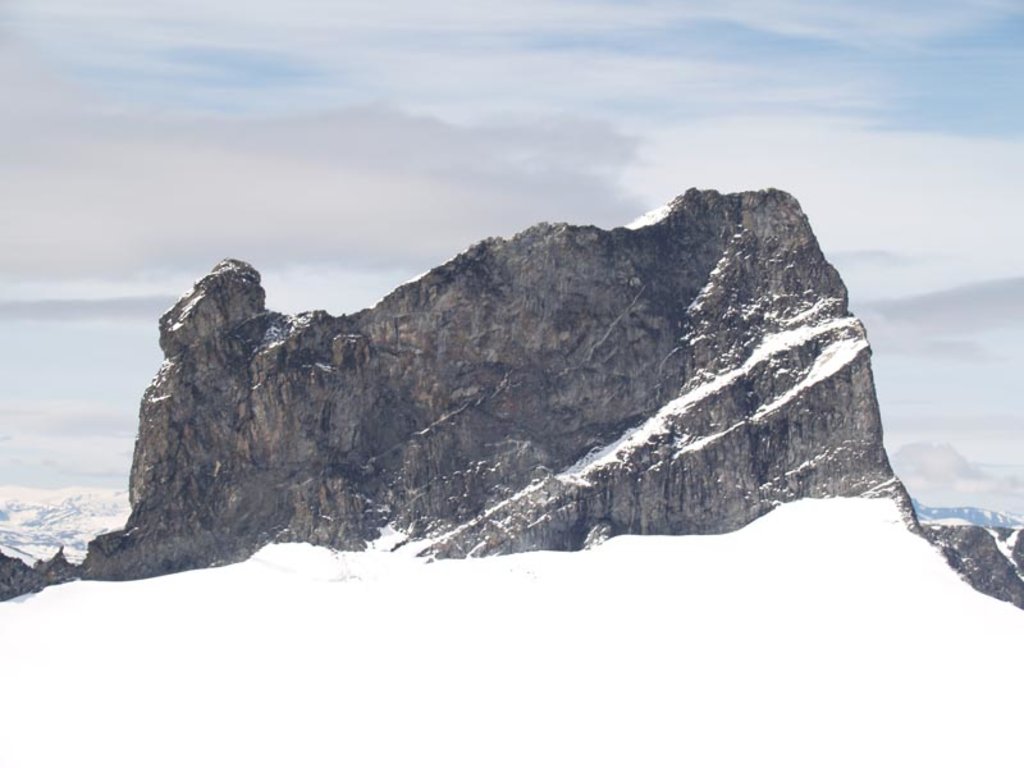 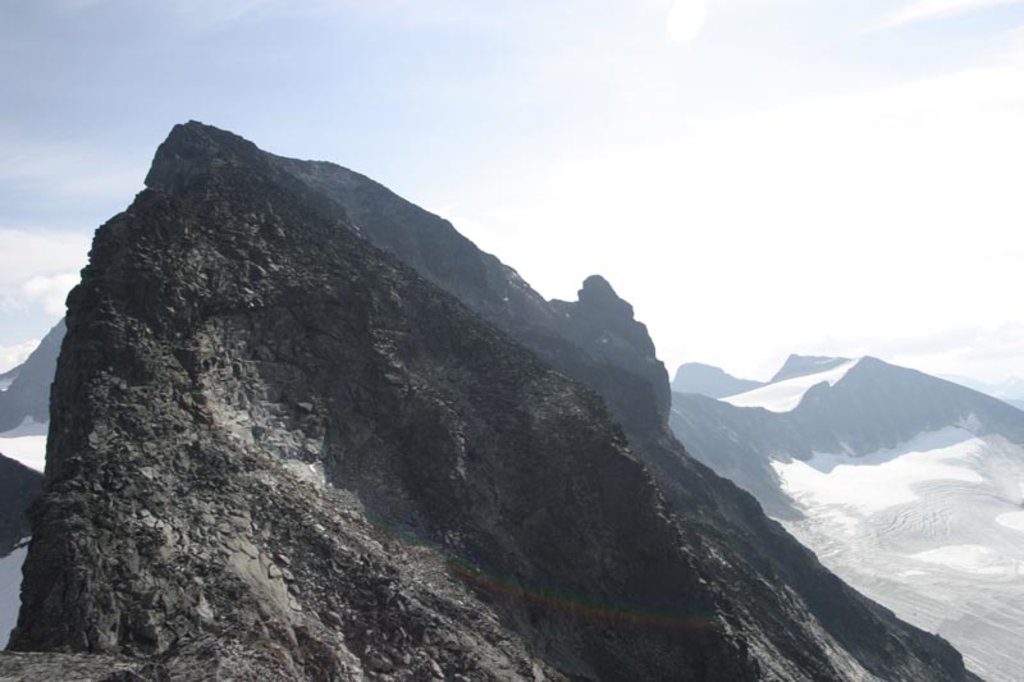 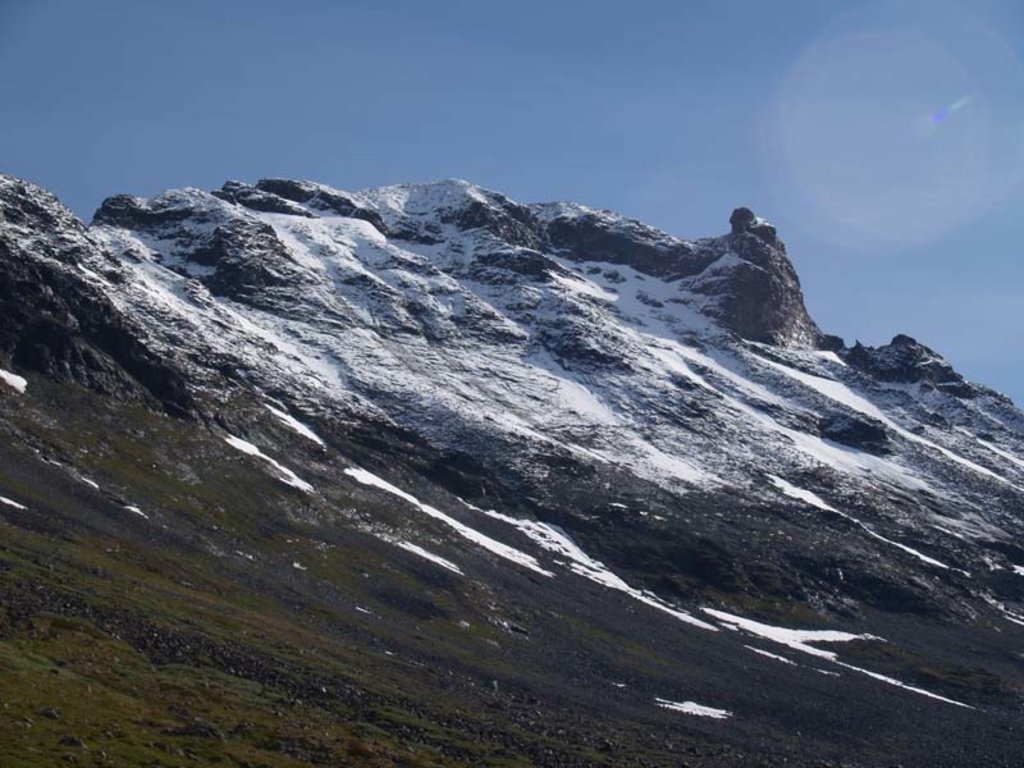 61.640556 N   8.305833 E
Nearest Higher Neighbor
Galdhøpiggen - 2.5 km E
El: 2 469 m / Prom: 2 436 m
Check out a downloadable 3D model of Skardstinden area. A higher resolution model can be found in the PeakVisor mobile app.
Do you have photos of Skardstinden or know something about it? Please let us know!