Huascarán National Park is one of the premier mountaineering destinations in Peru, with hundreds of glacial lakes, towering snow capped peaks, and the tallest mountain in the country. There are 166 named mountains in the park, the highest and most prominent of which is Huascarán Sur at 6,768 m (22,205 ft) in elevation. 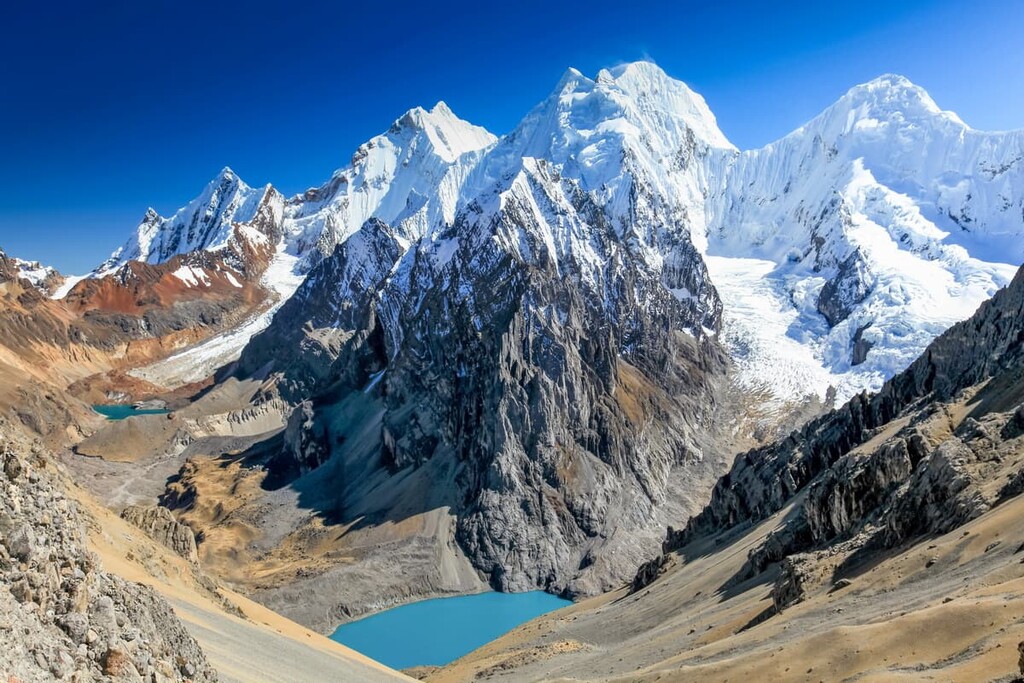 Huascarán National Park is located in the Central Andes within the Department of Ancash (Departamento de Áncash) in central Peru (Perú). The park encompasses most of the Cordillera Blanca, the highest tropical mountain range in the world. There are 27 peaks over 6,000 meters (19,685 ft) in the park, and the park itself is a UNESCO World Heritage Site.

There’s a stunning 4 km (2.5 mi) elevation difference between the highest and lowest points in the park, creating an incredibly rugged, varied landscape. Huascarán National Park is the largest glaciated area in the tropics and there are over 300 glacial lakes in the park.

The area is also a major destination for climbers, hikers, and mountaineers, with over 100 mountaineering routes and 25 designated trekking routes in the park.

Popular climbs include Peru’s tallest mountain, Huascarán Sur, and nearby Alpamayo and Artesonraju, which are considered some of the most beautiful mountains in the world. In fact, Artesonraju was potentially the inspiration for the mountain in the newer Paramount Pictures logo, though there is some debate as to whether the peak is really Utah’s Ben Lomond or Italy’s Monviso, instead.

There are 33 archaeological sites throughout the park, including cave paintings, fortresses, agricultural terraces, and even a pre-Columbian road. The park is also home to important species like the spectacled bear and the Andean condor, the latter of which is one of the largest flying birds in the world.

Huascarán National Park is part of the Andes, the longest mountain range in the world. While the entire range extends 7,000 km (4,350 mi) down the west coast of South America, the Cordillera Blanca is part of the central Andes. Huascarán Sur stands as the tallest mountain in the northern and central Andes and the fourth-highest Andean peak overall.

The Cordillera Blanca was formed by the subduction of the Nazca plate under the South American continental plate. This event caused the solidification of the large amounts of magma that became the Cordillera Blanca batholith, which forms the core of the peaks that we see today. The region’s geology is incredibly complex, featuring severely folded and faulted sediments and more recent volcanic activity.

The area is still considered one of the most seismically active in all of northern Peru, with major earthquakes taking place here in 1945, 1962, and 1970.

Another major element of the geological landscape in Huascarán National Park is glaciation. Glaciers carved the deep U-shaped valleys and magnificent pyramid peaks the Cordillera Blanca is known for, and they’re still present in the range today.

By some counts, there are over 600 glaciers in Huascarán National Park, but they’ve been diminishing rapidly in recent decades due to climate change. By some estimates, the park has lost 25 percent of its total glacial ice since the 1960s.

With over 4 km (2.5 mi) of elevation change throughout the park, Huascarán National Park is home to incredibly varied plant and animal life.

At lower elevations, there are small areas of montane tropical forest and high-alpine Andean forest, along with Puna and Paramo grasslands and scrub brush. At higher elevations, the mountain landscape transitions to tundra (known as tropical tundra in this latitude) and high alpine areas.

Plants here are adapted to intense solar radiation and minimal water. There are over 800 species of plants documented in the park, including the endangered Queen of the Andes, a massive bromeliad that can grow up to 15 m (50 ft) in height.

There are over 120 species of birds observed in the park and about a dozen species of mammals, including species of special concern like the Andean condor and the endangered Andean mountain cat. The park is also home to spectacled bears, the only remaining bear species native to South America, and vicuñas, a wild relative of the llama and Peru’s national animal.

People have lived in the area that’s now Huascarán National Park for thousands of years. There are 33 documented archaeological sites within the park from multiple time periods and civilizations, but the Chavín and Inca are best represented in the archaeological record.

The oldest site in the park, the Guitarrero Cave in Yungay, contains human remains that could be up to 10,000 years old. Other sites include cave paintings, irrigation trenches, agricultural terracing, tombs, villages, and even a pre-Columbian road that connects the towns of Olleros and Chavín.

Many large plantations were established on formerly communal land during the colonial period. By the mid nineteenth century, local Indigenous communities fought back against the usurpation of their traditional lands. This culminated in the Atusparia Revolt in 1885, where Indigenous communities in the region asserted their rights to communal highland areas that are now part of Huascarán National Park. There are still about 200 families living within the park today.

In the middle of the twentieth century, Peru’s national animal, the vicuña, was facing extinction and there was an effort to conserve its habitat. A special monitoring zone was created in the 1960s and the park was formally established in 1975. In 1985, it was declared a UNESCO World Heritage site.

Huascarán National Park is a hiker’s paradise, with dozens of routes ranging from day hikes to multi-day treks. While there are some less difficult hikes in the park, visitors should be aware that the high elevation can make any hike challenging. Be sure to acclimatize properly and watch for signs of altitude sickness.

While Huascarán National Park is known for trekking, there are some great shorter hikes that can be done in a day. Most of these require a long taxi ride from Huaraz. Alternatively, it may be more convenient to join an organized tour.

Laguna 69 is arguably the most popular trail in Huascarán National Park, featuring a stunning electric blue glacial lake at the end. While it’s relatively short, this trail is steep and reaches a moderately high elevation, so it’s a good acclimatization hike for newly arrived visitors.

Laguna Churup offers hikers views of towering snowy peaks and a beautiful blue lake like Laguna 69, with fewer crowds and a shorter climb. While the trail is shorter, it’s particularly steep, although the lake at the end is worth it.

If you really want to be sure you’re avoiding the crowds, Laguna Paron is a great hike. It’s difficult to reach from Huaraz, so it’s less frequented by tourists and only one tour company operates a trip there, one day a week. The hike is short but features stunning views overlooking the lake.

One of the biggest draws to Huascarán National Park is long-distance trekking, which allows hikers to see the Cordillera Blanca up close and experience it with fewer crowds.

The Santa Cruz Trek is the most popular and famous long-distance hike in Huascarán National Park. Most people complete the trail in 2–4 days, depending on their hiking speed and the weather. The trek features incredible views and several glacial lakes.

While the trek isn’t the steepest or longest, it features high elevations, including crossing one of the highest passes in the park at Punta Union (4,750 m/15,580 ft). Be sure to acclimate before the hike. You can do this trek independently, or go in a group with one of the many tour operators based out of Huaraz.

The Alpamayo Circuit is significantly longer than the Santa Cruz Trek, requiring between 7 and 12 days to complete, but it’s far less trafficked and takes you even deeper into the heart of the national park.

This hike leads past numerous glacial lakes, ancient ruins, and towering snow capped peaks. You may also meet some of the Indigenous communities who still live in the high mountain areas of Huascarán National Park.

This hike is recommended for experienced hikers only. You’ll need to be prepared to navigate on your own and deal with medical emergencies as evacuation is difficult or impossible in many areas.

Between reliable weather, minimal permitting headaches, and dozens of peaks to choose from, Huascarán National Park is one of the best destinations in the world for mountaineering in the 6,000–7,000 meter range. Here are some of the most popular peaks:

Looking for a place to stay in Huascarán National Park? Here are some of the best cities and towns to check out:

Serving as the political, economic, and tourist capital of the Ancash region, Huaraz is a city of about 120,000 people situated at the foot of the Cordillera Blanca. The city is a major jumping-off point for tours into the national park, with most visitors using Huaraz as a base or at least transiting through town at some point.

The city offers plenty of lodging at all price points (especially budget accommodation) along with bars, restaurants, and even some nearby hot springs.

Yungay is a small town just below Huascarán Sur, which makes it a great base for exploring that area of the park. The town is located on Route 106, which is one of only four roads that cross the Cordillera Blanca in the national park.

The current town of Yungay was rebuilt after a devastating earthquake in 1970, where the entire village was destroyed and 20,000 inhabitants were buried under the rubble. The event is considered one of the worst natural disasters in Peru’s history.

Lima is located 400 km (250 mi) from Huascarán National Park on the central coast of Peru. While it’s quite a ways from the park, you’ll almost certainly be transiting through the country’s capital and largest city, especially if you’re arriving in Peru via airplane. Lima isn’t a hiking destination, but it’s certainly worth a few days of your time.

Lima is a major city with nearly 10 million inhabitants and world-renowned dining and nightlife. The city, which was formally established in 1535, also has prestigious museums, colonial architecture, and excellent surfing. 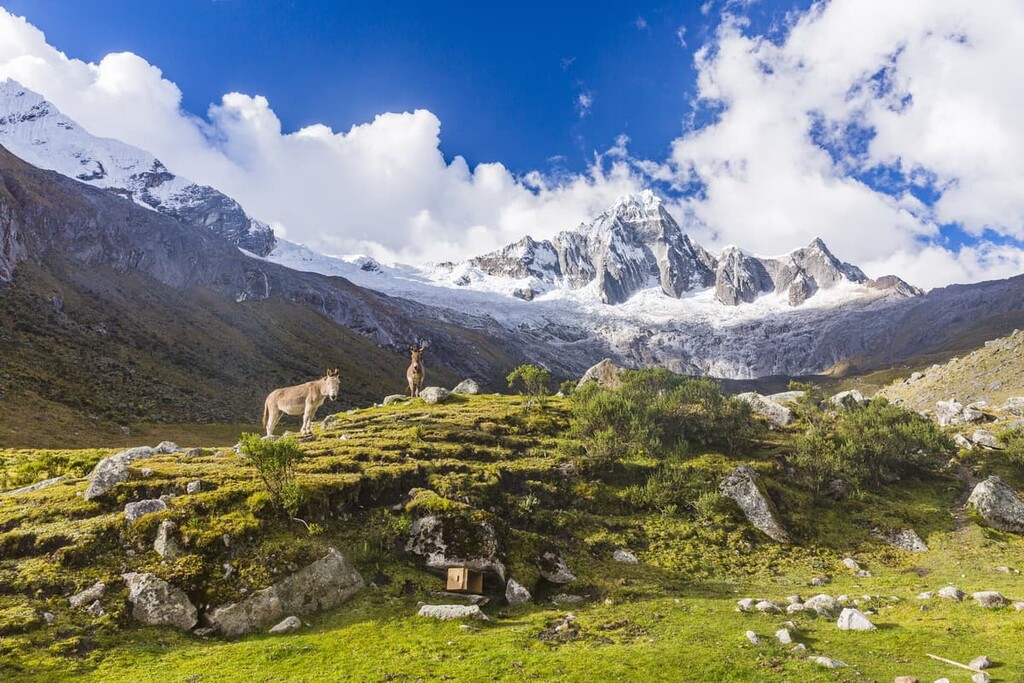 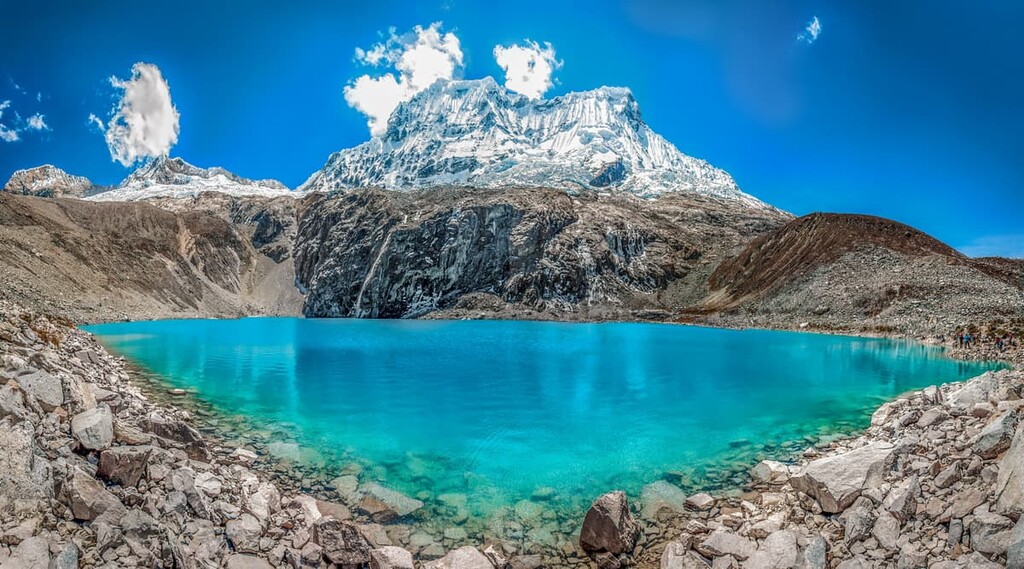 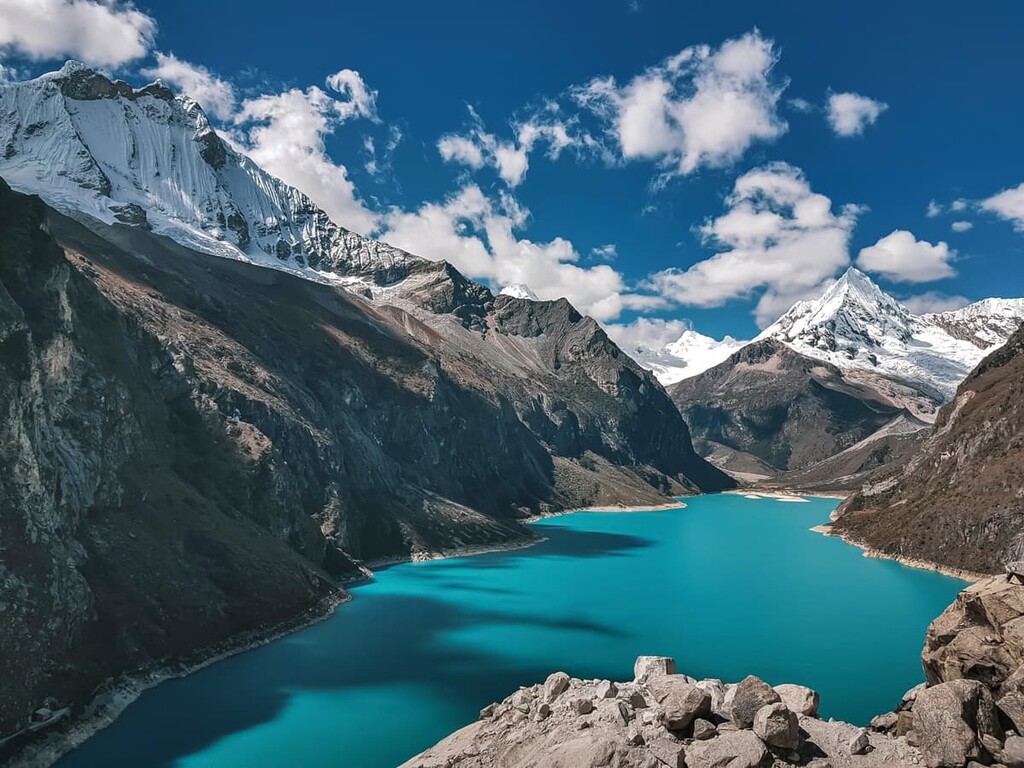 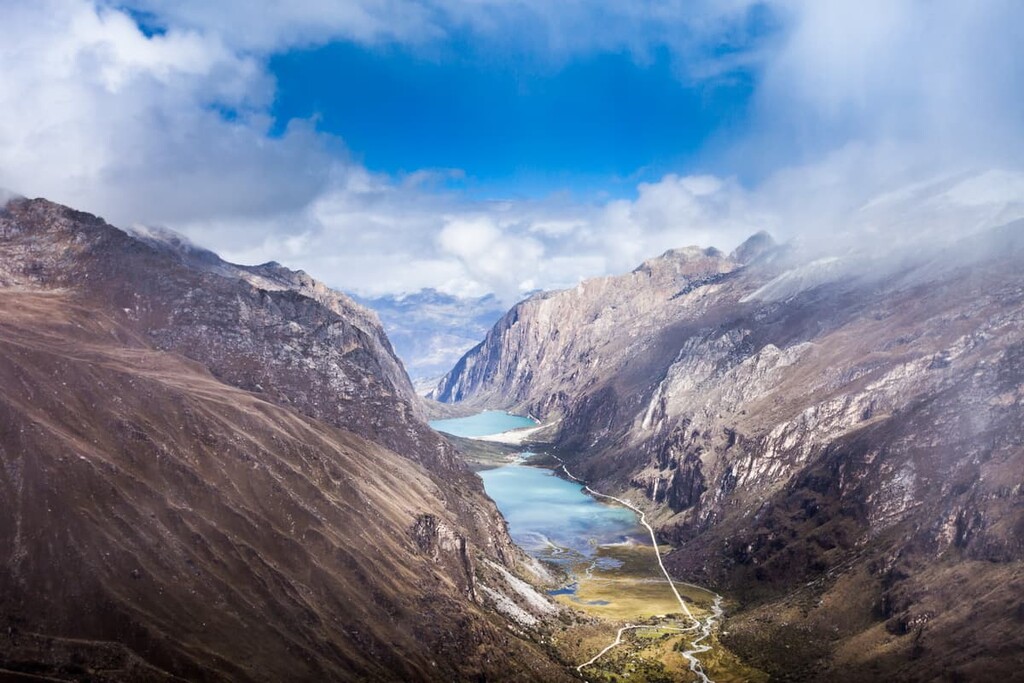