Aconcagua Provincial Park (Parque Provincial Aconcagua) is a rugged protected area located in Argentina that contains 35 named mountains, the tallest and most prominent peak of which is Cerro Aconcagua. Also known simply as Aconcagua, this majestic mountain is 6,961 m (22,838 ft) tall with 6,961 m (22,838 ft) of prominence, making it the tallest peak in the Americas, the second most prominent peak in the world after Mount Everest, and one of the Seven Summits. 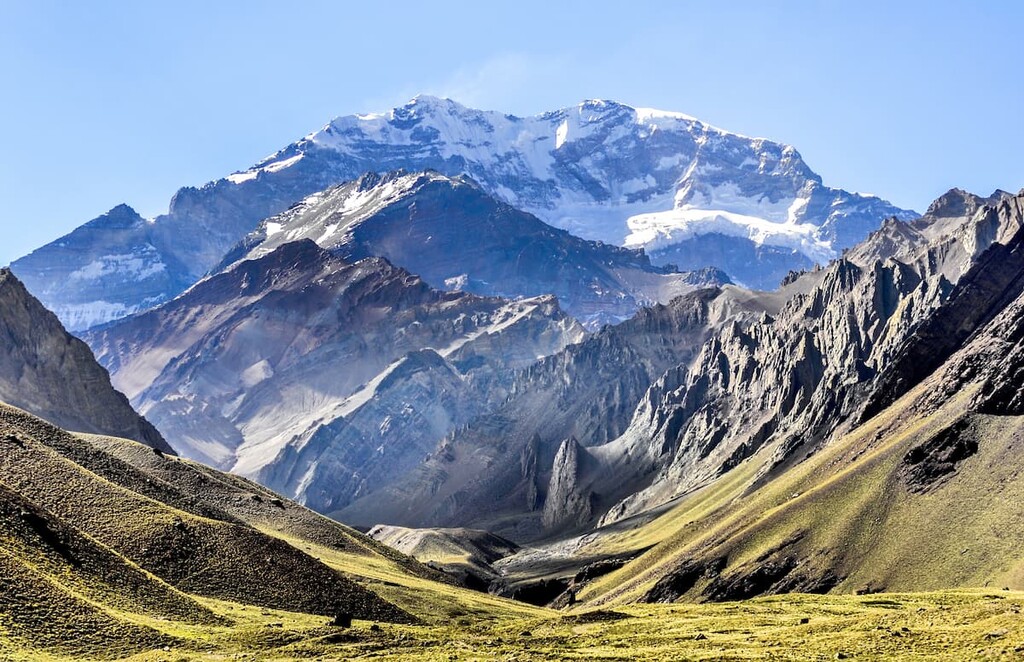 Aconcagua Provincial Park is situated in the central western region of Argentina within Mendoza Province. It is located within the Andes mountain range, and Cerro Aconcagua is nestled in the northwestern section of the park. The park spans 71,000 hectares (175,445 acres) of land across western Argentina, close to the country’s border with Chile to the west.

The landscape of the park is defined by the dense concentration of steep peaks found within its borders. Amidst the many peaks lie various long and deep valleys, interspersed with vast alpine meadows. Fast flowing rivers run throughout the landscape, having once carved the iconic valleys of the region.

The steepest peaks of the park are located along its western edge and they remain covered in snow throughout the entire year. There are only 13 mountain passes that cross the Andes, with the only paved route in the range traveling along the southern edge of the park.

The jagged peaks in the park look characteristic of a volcanic landscape, even though Cerro Aconcagua is not an active volcano like Volcán Tupungato, which is located to the south.The often bare slopes of the peaks are contrasted by the lush and fertile lands of the alpine pastures.

At the southern edge of the park lies Puente del Inca, a natural arch that formed over the Las Cuevas River. The arch was formed by both the glaciers and rivers of the region. The river that flows under the arch today is thought to have carved through the once solid structure, leaving behind the iconic bridge.

While Cerro Aconcagua is the most iconic and visited feature of the park, other popular destinations include the Horcones Lagoon, Plaza de Mulas, and Plaza Francia.

The mountains in the Aconcagua Provincial Park are part of Andes and, as such, they share a similar geologic history with the rest of the range. In particular, the peaks of the park were created by the subduction of the Nazca Plate underneath the South American Plate.

Prior to 10 million years ago, Cerro Aconcagua is believed to have been an active stratovolcano. Yet around 8 to 10 million years ago, as subduction of the Nazca Plate began to subside, the peak was lifted from its volcanic roots and pushed farther east. Because of this, the flanks of the peak are characterized by its lava formations despite the peak not currently being active.

Amidst the lava, breccia, and pyroclastic formations of the park lie a number of colorful sedimentary deposits, particularly found in the Horcones Valley. These deposits consist primarily of carbonates, turbidites, evaporates, and limestones.

The park is home to five main glaciers that combined cover an area spanning 32 sq. km (12.4 sq. miles). Many sections of these glaciers are characterized by their penitentes, which are long, thin blades of ice or hardened snow. These spike-like formations can stand four meters high giving the ice its distinctive shape.

Due to the high elevations in the park, biodiversity in the region is relatively low. However, a variety of plant and animal species can still be found throughout the park.

Common mammals that inhabit Aconcagua Provincial Park include guanacos, pumas, and red foxes. Though they are found at higher elevations, during the winter months these animals can be spotted at the lower elevations in the park.

The Andean toad is also found in the park, demonstrating the quality of the freshwater in the region. Other common species include Andean hummingbird, hawds, sparrows, eagles, and condors.

There are limited plant species in the park, and most of them can be found in the open pastures. Here both huecu and coirones are common, with forested sections being found at lower elevations. Common trees in the park also include yellow lena, yareta, and goat horn.

Humans have inhabited what is now the Mendoza Province for hundreds of years. Prior to Spanish colonization, the Huarpes people lived through the region.

The Huarpes lived and continue to live in small villages within the area, often near the region’s major rivers and tributaries. Historically, these small communities would relocate seasonally, often only exploring into the mountains during the warmer months of the year.

In 1561, Pedro del Castillo of Spain established the city of Mendoza, which lies to the east of the park. Prior to 1600, there were estimated to be fewer than 100 Spanish colonizers in the region. Yet as this number grew exponentially over the following decades, Indigenous peoples were further exploited and used for slave labor.

The summit of Aconcagua seemed unattainable for climbing until 1894 when Matthias Zurbriggen of Switzerland made the first recorded ascent of the peak by a European. The east side of the mountain was later climbed in 1934 by a team from Poland. This Polish team summited via a glaciated route that’s now known famously as the Polish Glacier.

That being said, Aconcagua is generally considered to be fairly easy to climb when climbed from the north on what’s known as the Normal Route through the Horcones Valley. As this route doesn’t require extensive technical climbing ability, it’s often considered to be the highest non-technical mountain in the world.

However, any ascent of Aconcagua is a serious undertaking as the peak’s lofty elevation increases the risk of developing altitude illnesses. As a result, anyone looking to climb the peak should be prepared for both the elements and the risks of climbing at high elevations. Hiring a guide service is highly recommended unless you are already a very experienced mountaineer.

The park was established in 1983 in order to protect the sacred land and the pristine waters of the region. While only 350 people climbed Aconcagua in the first year of the park, by 2009 over 3,700 people climbed the peak. It is now one of the most important provincial parks in the country due to the popularity of Aconcagua itself.

Aconcagua Provincial Park is home to many popular day hikes and trekking routes. Here are some of the best hiking options in the park to consider:

Mirador Plaza Franica is an out and back trail that can be accessed throughout much of the year. The trail totals 35 km (21.6 miles) roundtrip with 1,457 m (4,780 ft) elevation gain. The trail climbs through the alpine landscape of the region, allowing for panoramic views along the way.

While grasslands can be found near the start of the hike, the higher elevations showcase the volcanic-like structure of the landscape with the snow capped peaks towering overhead.

The Horcones - Confluencia route in the park is 14.5 km (9 miles) long and has 538 m (1,765 ft) of elevation gain. The trail starts on the outskirts of the park and finishes at the first basecamp of Aconcagua. While the route offers a scenic day hike, it is also used as the main ascent up to the summit of the iconic peak.

Though climbing Aconcagua is not considered extremely technical, trying to reach the summit should only be done by those with mountain climbing experience. The long trail to the summit is 75 km (46 miles) out and back with 4,267 m (14,000 ft) elevation gain.

The route often takes over a week due to the mountain's lofty elevation. Hikers must take time to acclimate at base camp and multiple intermediary camps along the way in order to increase their chances of reaching the summit. Hiring a guide service is highly recommended for newer climbers.

Looking for a place to stay near Aconcagua Provincial Park? Here are some of the best cities and villages to check out in the region:

Located an hour northeast of the park’s entrance is the village of Uspallata. The village is a frequent stop for travelers due to its location along the main mountain pass across the Andes from Mendoza to Santiago.

The village is nestled in the foothills of the main portion of the Andes. It is also home to “las bovedas,” which are egg-shaped kilns dating back to the seventeenth century. During this time, the kilns were used to extract precious metals and minerals from mined raw materials.

Mendoza is on Ruta Nacional 7 which is the only paved mountain pass across the Andes, connecting the city to Santiago in Chile. Along with numerous museums and cultural sites, Mendoza is also known for its world-class wine and restaurant scene along with its close proximity to the mountains. 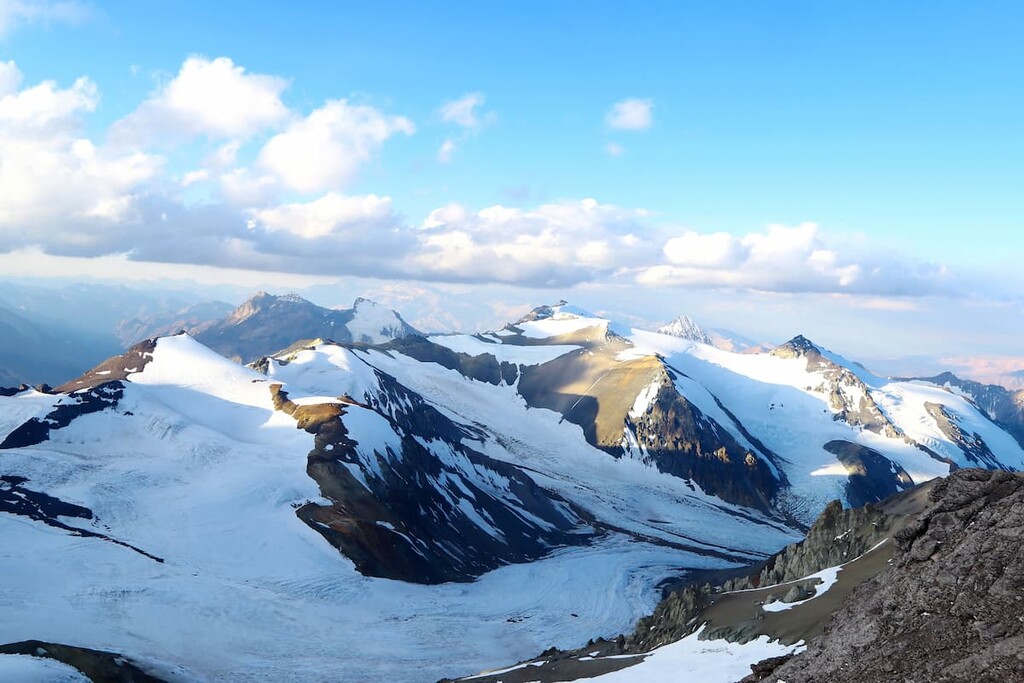 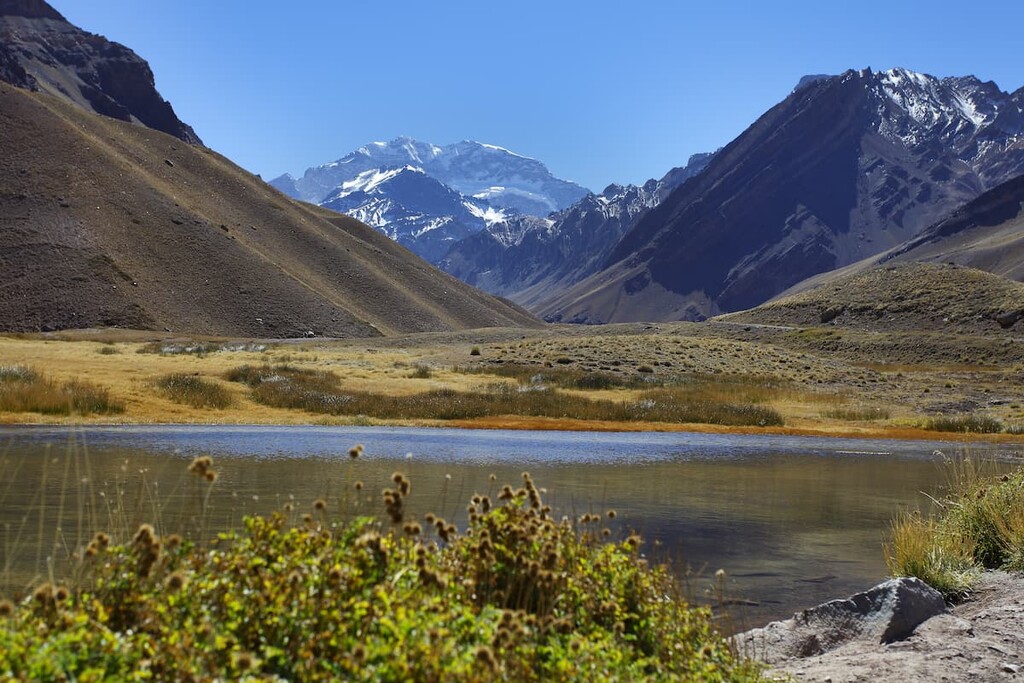 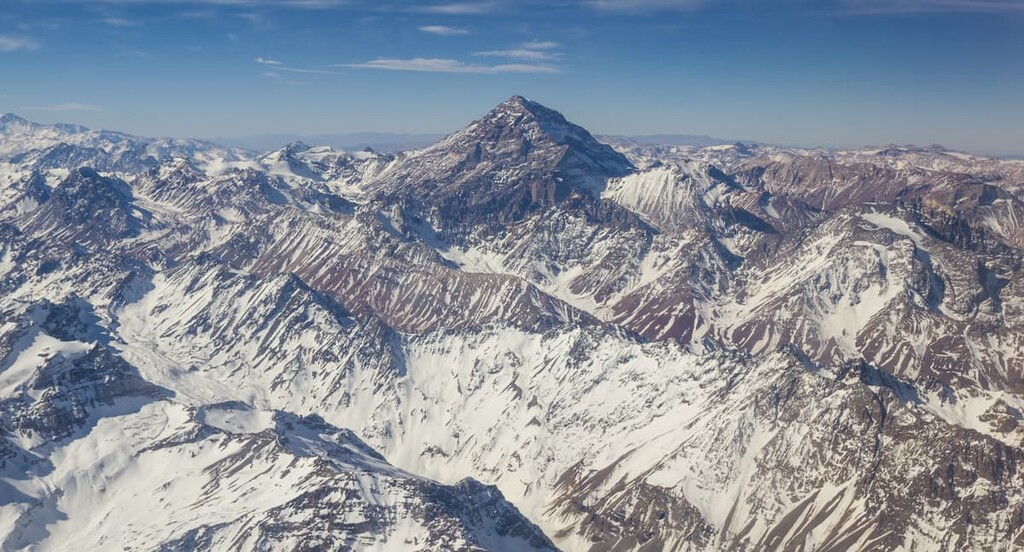 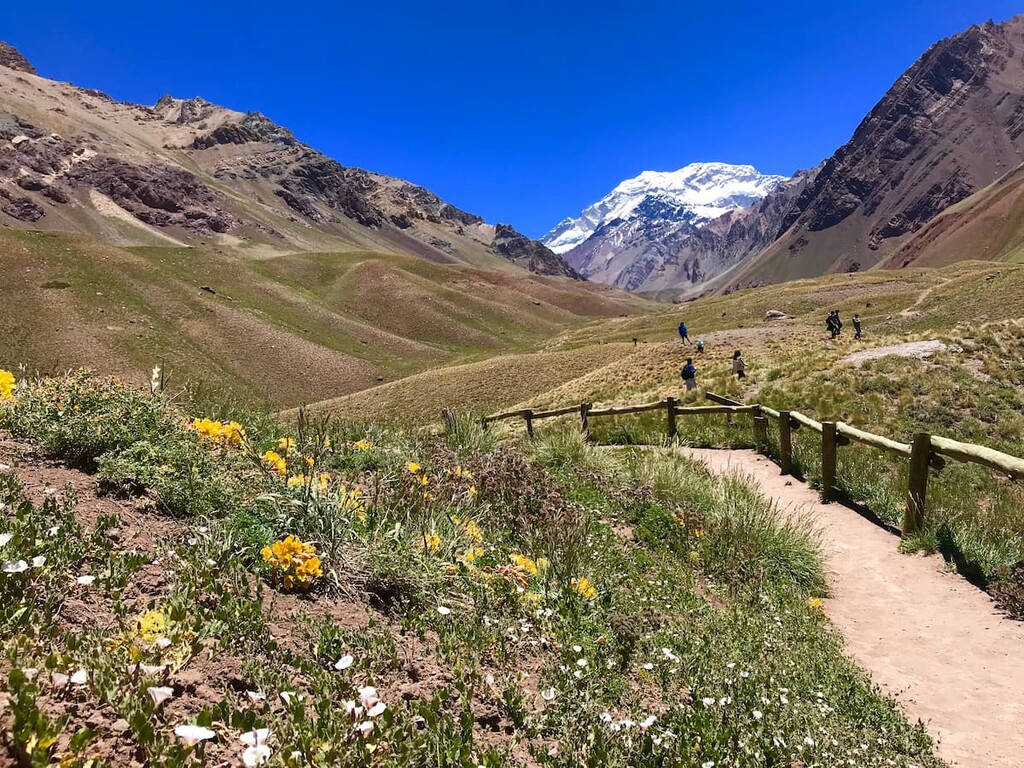 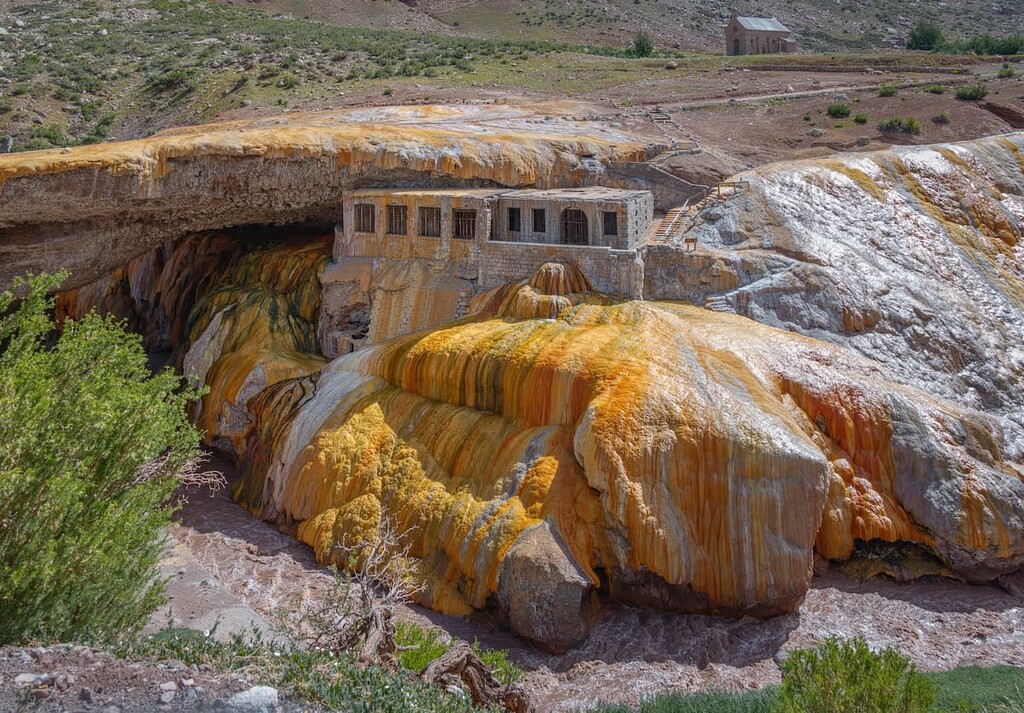 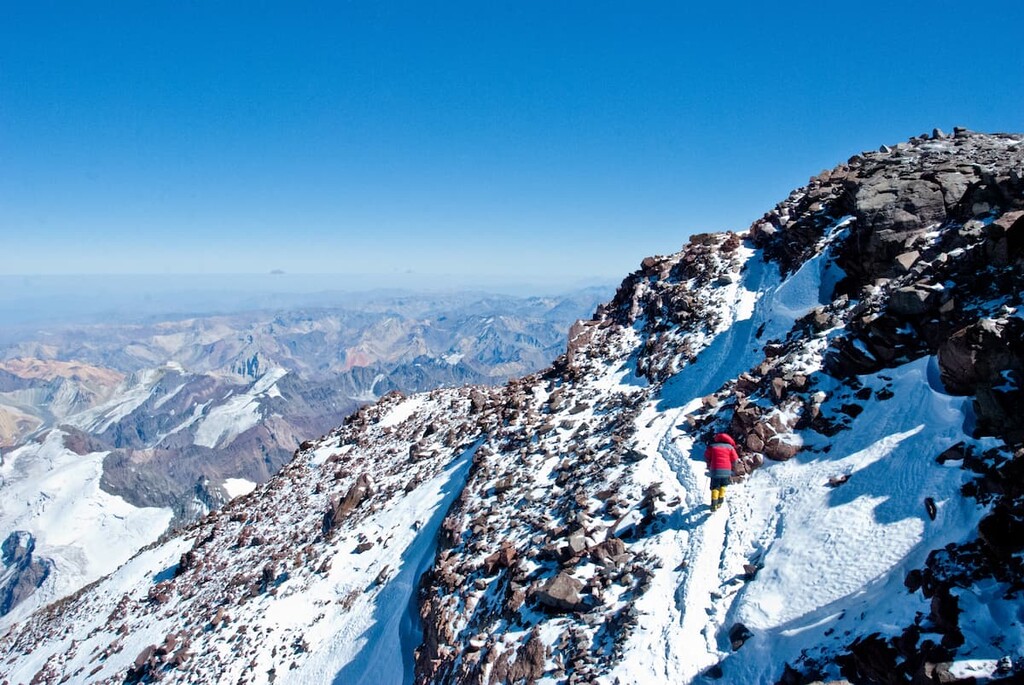 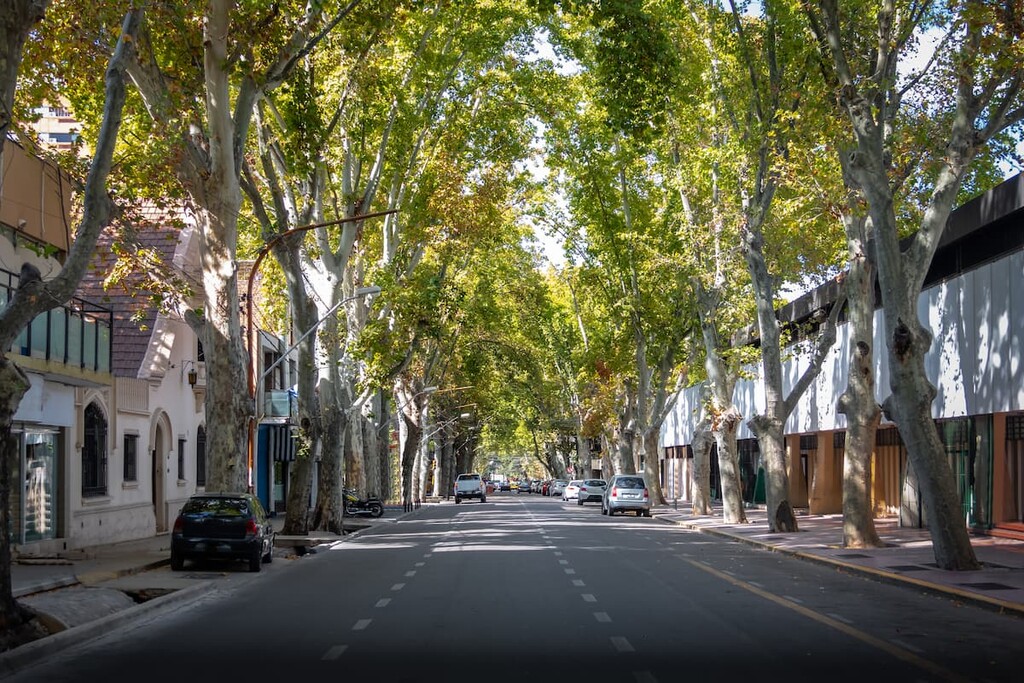