Parque Provincial Volcán Tupungato (Volcano Tupungato Provincial Park) is an outdoor recreation destination located in western Argentina. The park is known for its stunning landscape, particularly the iconic Volcán Tupungato. In total, the park contains 71 named mountains, the tallest and most prominent of which is Nevado del Plomo at 6,070 m (19,915 ft) in elevation with 1,531 m (5,023 ft) of prominence. 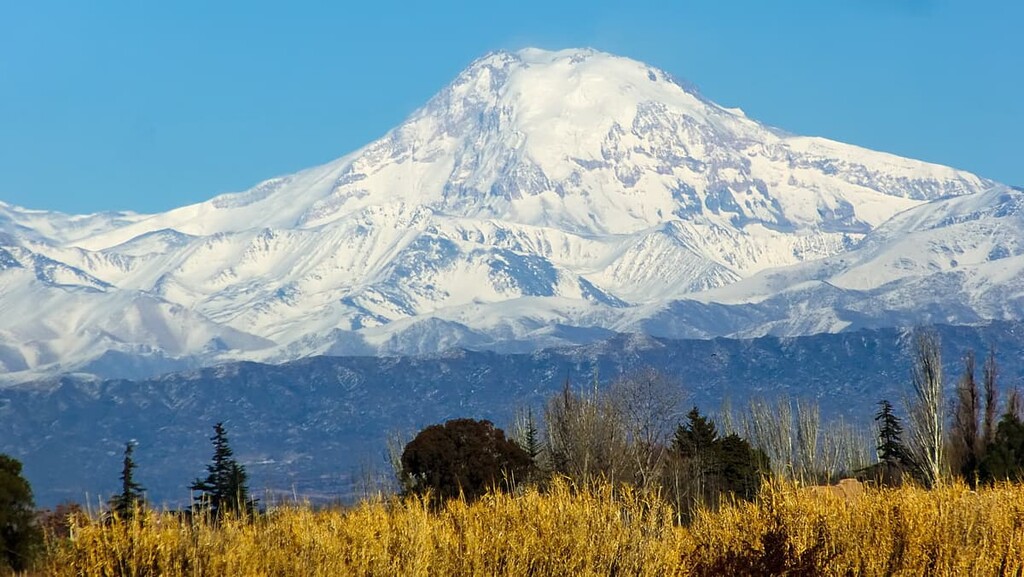 The park is nestled within the Andes mountain range, and Volcán Tupungato, which the park is named after, sits along the southwestern border of the protected region. The park shares a border with Chile to the west and spans a total area of 150,000 hectares (370,658 acres).

The Volcán Tupungato Provincial Park sits just 110 kilometers (68 miles) southwest of the city of Mendoza in the Andes. Within the park lie two major sections of peaks, characterized as the Main Range and the Frontal Range. Between the two ranges is the Tupungato River, which runs longitudinally through a valley.

The steepest peaks of the park are located in the Main Range. These peaks are covered with snow throughout the entire year. Besides the rugged peaks, the park is known for its deep valleys, such as the Uspallata Yalley.

The geology of the park is closely intertwined with that of the Andes. The Andes formed around ten to six million years ago. As the Nazca Plate was subducted underneath the South American plate, the mountains throughout the park began to rise.

While the range was formed around this period of time, the slow process of uplifting is thought to have begun around 25 million years ago. Because these two plates are still colliding, the entire range grows a few millimeters each year.

The oldest rocks in the park form what is now called the crystalline basin. Sediments of marine origin in the region date back to the Paleozoic and Mesozoic eras. Throughout the park, lava, breccia, and pyroclastic formations can be found along with deposits of carbonates, turbidites, evaporates, and limestones.

Tupungato is characterized by an Andean lava dome upon its summit and showcases a wide range of volcanic rocks. Though the craters in the peak demonstrate that it was once an active volcano, it is no longer active. Today, the peak for which the park is named after is covered in glaciers all year round.

Due to the high elevations and minimal annual precipitation totals in the region, biodiversity is quite low throughout the park. Nevertheless, despite the low amounts of biodiversity, the plants and animals in the park are quite unique due to their ability to adapt to such harsh living conditions.

Much of the plant life within the park can be found in the high altitude open grasslands. The huecu mountain grass is scattered throughout the region. The foothills along the eastern edge of the park have various shrubs such as goat horn and yellow firewood.

Though plant life is limited, some species can be found among the jagged peaks. Common species include foxes, guanacos, agachona, mice, along with eagles and condors. Endemic frog and lizard species have helped scientists distinguish the pristine nature of the waters within the park and the surrounding region.

The Mendoza Province has been inhabited by humans for hundreds of years. The Hurapes people lived throughout this section of land prior to the Spanish colonization. During this time, the Hurapes lived near the major waterways in small villages.

As a nomadic people, the small communities in the region would often migrate with the seasons, moving down to lower elevations during the colder months of the year. However, in 1561, the city of Mendoza was established by conquistador Pedro del Castillo of Spain.

In the decades that followed less than one hundred Spanish colonizers inhabited the region. However, that number began to surge after 1600 when the Spanish began further exploiting the Indigenous peoples of the region and using them for slave labor.

Volcán Tupungato was established in 1983, along with Aconcagua Provincial Park (Parque Provincial Aconcagua), which lies to the north.

The term “Tupungato” comes from the Quechua language and it roughly translates to “the land that flourishes.” Volcán Tupungato Provincial Park was established in order to protect the central Andes and the waterways which create the groundwater for the communities in the surrounding foothills.

While there are minimal to no trails in Volcán Tupungato Provincial Park the surrounding region has various other parks that are great for hiking. Here are some of the best hiking options in the region to consider:

Home to the tallest peak in the Americas, Aconcagua Provincial Park has a wide range of adventures for visitors to enjoy. For example, hiking through the Mirador Plaza Francia showcases both the grasslands of the lower elevations along with the snow-capped peaks of the region.

Other major routes can be found along the main trail up to the summit of Aconcagua. Though summiting the mountain requires extensive mountaineering experience, day treks can be made up to the first basecamp or along nearby trails.

Looking for a place to stay near Volcán Tupungato Provincial Park? Here are some of the best cities and villages to check out in the region:

Located east of the park lies the city of Mendoza, which is also the capital of Mendoza Province. Situated along the foothills of the Andes, Mendoza is home to a vibrant city life along with a world-class wine scene.

The city has a metropolitan population of just over 1 million people, making it the fourth largest metropolitan area in the entire country. Mendoza is on Ruta Nacional 7—the only paved mountain pass across the Andes—which connects the city to Santiago in Chile.

Because the park shares a border with Chile, it is also located close to Santiago. With a metro population of around 7 million people, Santiago is the largest city in all of Chile. Nestled between the Andes mountains and the Pacific Ocean, Santiago offers a wide variety of outdoor activities and cultural traditions.

Today the bustling major city is known for its fine dining, hiking, night life, and extensive network of museums. The city is connected to Mendoza in Argentina by the only paved mountain pass through the Andes. 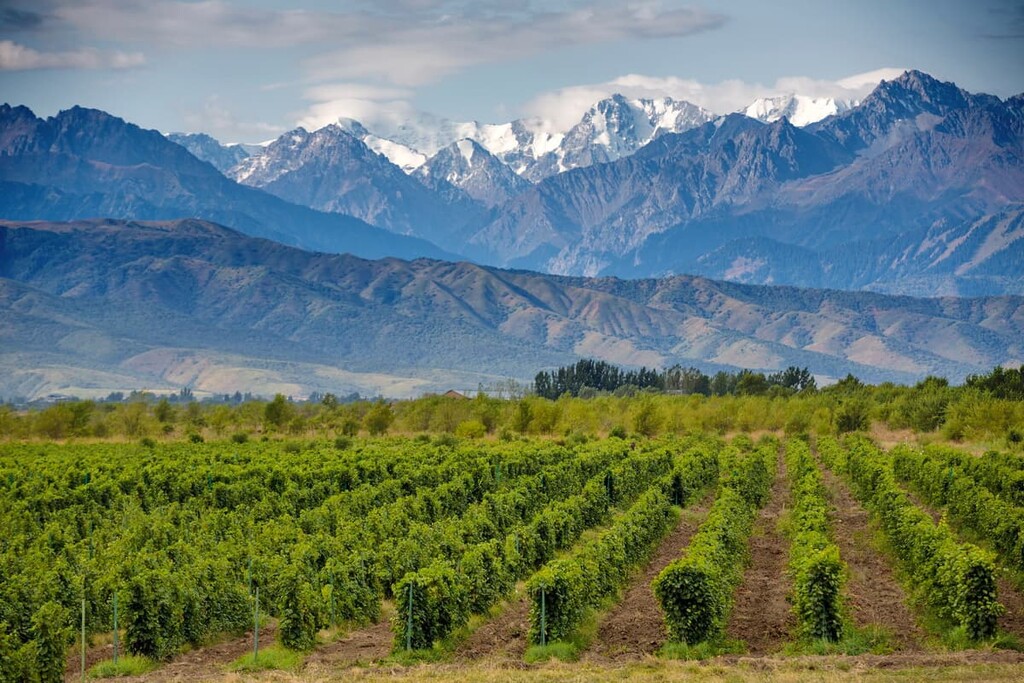 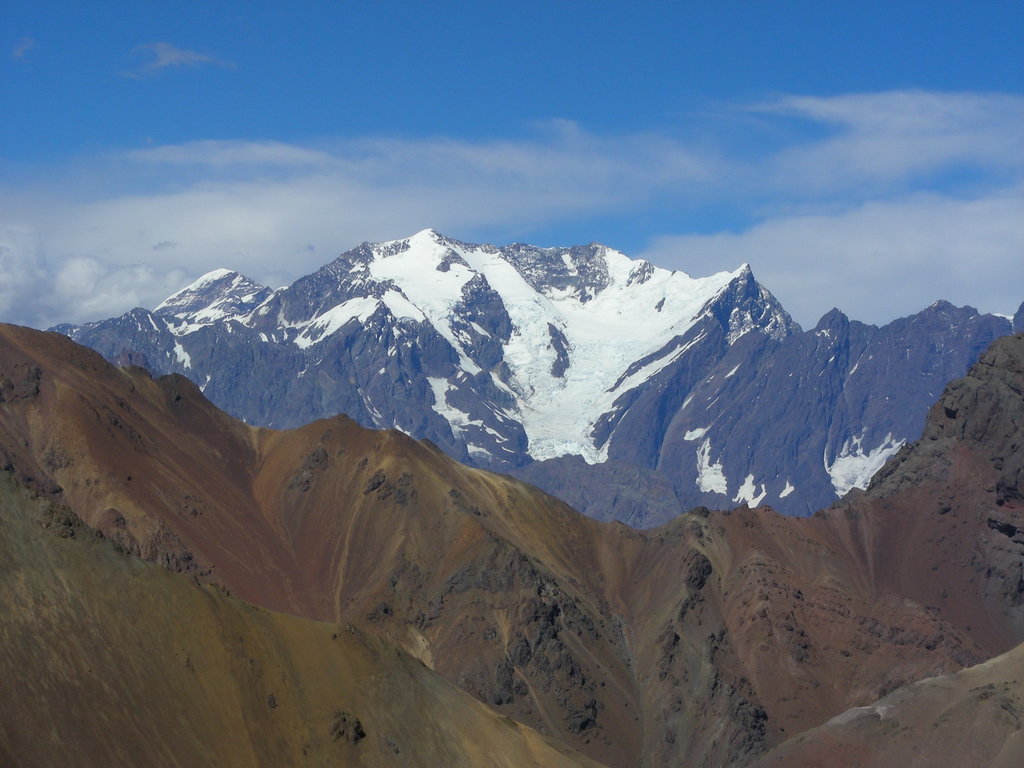