The Región Metropolitana de Santiago (English: Santiago Metropolitan Region) is the most populous of Chile’s 16 administrative divisions. It is Chile’s only landlocked region and it is home to the nation’s capital - Santiago. 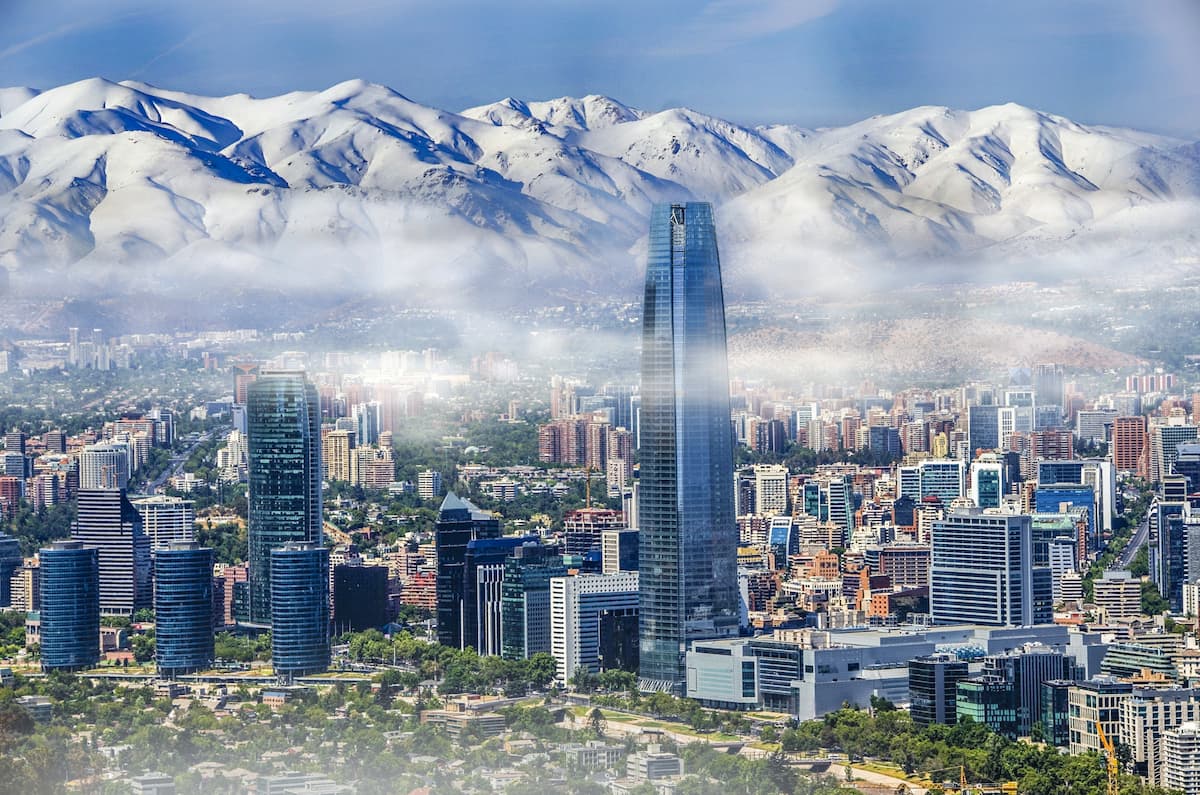 The climate of the Región Metropolitana de Santiago is Mediterranean, with a long dry season and a fairly cold, rainy winter. Because of the varied elevations of Santiago, however, temperature and precipitation can vary greatly depending on location.

There are three main geographical sub-regions of the Región Metropolitana de Santiago: the Andes Mountain Range, Intermediate Depression, and the Chilean Coastal Range.

The Andes mark the region’s eastern border with Argentina, and boasts the region’s largest mountains and notable vistas, such as the aforementioned Volcán Tupungato, Cerro Marmolejo at 6,109m/20,042ft, and Nevado de Los Piuquenes at 6,098m/19,715ft. From the Andes are numerous buttresses that jut out into the Intermediate Depression, resulting in the Cerro San Cristóbal, Santiago’s second-largest hill.

The high elevations of the Andes, typically above 3,000m/9,843ft, present a much colder climate than the land below. This climate begets the accumulation of snow and ice fields in the mountains’ peaks, forming the beautiful white caps visible from the city of Santiago.

The Chilean Coastal Range marks the region’s western limits, bordering the region of Valparaiso. The range stretches all the way from Morro de Arica in the north to the Taitao peninsula in the south for some 3,100km/1,926ft. While its tallest mountains are not within the Región Metropolitana de Santiago, there are nonetheless plenty of impressive peaks accessible inside the region.

Between the ranges is the Intermediate Depression, otherwise known as the Central Valley, consisting of generally flat and fertile prairie that is largely surrounded by hills. Its landscape has been very conducive to human development, allowing for the prosperity of Santiago and several of Chile’s other most populous cities, most of which orbit Santiago.

However, the Intermediate Depression does present a problem in extremely dense, car-heavy Santiago.

Thermal inversion can cause the hot air in Santiago to concentrate higher in the atmosphere, especially during the fall and winter, and when combined with the lack of wind due to mountain ranges surrounding Santiago. This results in pollution getting trapped as well, forming a thick layer of smog in Santiago’s atmosphere. After rainstorms, however, the smog may clear up for several days.

From mountains to volcanoes to island hills to glaciers, the Región Metropolitana de Santiago is a diverse geological wonder. The Andes are perhaps the most famous of its wonders, a subduction-formed Mesozoic-era orogenic mountain belt with a number of Pleistocene-era stratovolcanoes from its location on the Pacific Ring of Fire.

The Andes contain immense deposits of ore and salt, and are also viable for hydrocarbons, saltpeter, copper, and lithium.

The Intermediate Depression is a longitudinal rift valley formed in the Tertiary period, at which point it was filled with materials from both the Andes and the Chilean Coastal Range, including the ashes of the various volcanoes and the products of erosion undergone by Andean reliefs.

The Chilean Coastal Range formed from the alignment of various actions involving horst, forearc highs, and upthrust blocks, and was separated from the Andes during the Tertiary period when the Intermediate Depression formed.

The bedrock of the Chilean Coastal Range, at least where the Región Metropolitana de Santiago resides, consists mainly of the Coastal Batholith of central Chile, igneous rocks that once helped form a proto-Andean range.

The Región Metropolitana de Santiago largely consists of mountainous climates and ecosystems, although there are also acacia caven steppes in the valleys and basins and sclerophyllous forests at higher altitudes, typically above 500 m. Sclerophyllous plants are a hard-leafed plant adapted to retain moisture, and these altitudes provide enough precipitation for them to thrive.

The intensely urban and developed nature of much of the region has reduced the quantity and diversity of native species, but there are still certainly plenty to be found outside of main metropolitan and agricultural areas.

The fertility of the valley has allowed for much agricultural development, which, over time, has come to include popular foreign species such as eucalyptus, poplars, and pine, drastically altered much of the ecosystem. As a result, most natural vegetation can only be found along the mountains, away from intensive human settlement.

In terms of natural foliage, however, the region is one of the few places where the endangered Chilean Wine Palm can be found, an iconic Chilean tree and one of the largest species of palm trees in the world.

The first groups of humans to inhabit the Santiago basin were hunter-gatherers who arrived between 10,000 and 9,000 BC. Eventually, over thousands of years, the inhabitants of Santiago began to create more permanent settlements, taking advantage of the Mapocho River to begin establishing agricultural communities.

These villages, populated by a people group called the Picunches by the Chileans, fell under the rule of the Inca Empire in the 15th century, though the Inca only ruled for a relatively short span of time, until the early/middle 16th century. It is believed that the Maipo River, right under Santiago, marked the southernmost border of the Inca Empire.

This came to an end due to the arrival of and the colonization of the Spaniards in the 1540s, an arrival that would forebode centuries of power struggles and conflict between the indigenous peoples and the Spanish colonizers. The Spanish formed what would become modern Santiago around 1541/2, establishing a cabildo government in the city to supervise the whole region.

The seemingly endless quantity of mountains and hills provides many amazing trails of all varieties throughout the Región Metropolitana de Santiago.

The Reserva Nacional Río Clarillo, in the southeast foothills of Santiago by the Pirque commune, is known for its sclerophyllous forest and, of course, for its namesake river. The reserve is one of the best places to see certain types of Chilean flora and fauna, like the peumo, litre, lun, quillayes, and the Cordilleran Cypress, or the endangered woodpigeon and Chilean iguana.

There are 11 named mountains in the Reserva Nacional Río Clarillo. The highest of these mountains is Cerro Morado, at 2,736m/8,976ft tall, while the most prominent is Cerro Cruzada Las Hormigos, at 500m/1,640ft of prominence.

The Reserva Nacional Roblería del Cobre de Loncha was established fairly recently, in 1996, providing another protected area of sclerophyllous and deciduous forest. The reserve contains 8 named mountains, the highest and most prominent of whic is Alto Llivillivi, at 2,097m/6,880ft tall and 738m/2,421ft in prominence. One of its most well known trails is the popular Embalse Carén circuit.

Located in the commune of San José de Maipo, the Cascada de las Ánimas is known for the rivers and waterfalls that give it its name. The Maipo River provides opportunities for rafting, alongside the other available adventures of horseback riding, zip-lining, kayaking, and hiking.

There are 4 named mountains in Cascada de las Ánimas, the highest and most prominent of which is Cerro Punta Horizonte at 3,235m/10,614ft of height and 181m/594ft of prominence.

The Cascada de las Animas offers a variety of trails at various points of intensity, many of which are guided. Notable hikes include:

Yerba Loca is a popular Andean park with a stunning glacier-water river running through from the La Paloma Glaciar. Yerba Loca contains 19 named mountains, with Cerro Littoria as its highest point at 5,382m/17,657ft, and Cerro Altar as its most prominent with a prominence of 519m/1,703ft.

Bordering the communes of Las Condes and La Reina and the Andes Mountains, the Parque Natural Aguas de Ramón contains six named mountains, the tallest and most prominent of which is Cerro San Ramón with an elevation of 3,255m/10,679ft and a prominence of 923m/3,028ft.

On the edges of the communes of Las Condes and Lo Barnechea is the Parque Puente Ñilhue, with two named mountains. The highest and most prominent of these mountains is Cerro Provincia, with a height of 2,748m/9,016ft and a prominence of 245m/804ft.

Monumento Natural El Morado is a unique glacial cirque with 4 named mountains, the highest of which is Morado Norte at 4,501m/14,767ft, while the most prominent is Cerro San Francisco with a prominence of 4,353m/14,282ft.

The tallest peak in the region, the Volcan Tupungato, which is also the highest mountain in the Andes south of Aconcagua, is an imposing feature of the Santiago skyline. It is not a very common ascent, but certainly a challenging and rewarding one.

There are also many other peaks of interest around the Volcan Tupungato, such as Polleras, Pabellón, Chimbote, Tupungatito, and Alto.

Both in and outside the Región Metropolitana de Santiago boast amazing and culturally rich cities, any of which would make a great destination either for a day trip or to reside when in Chile.

Within the Región Metropolitana de Santiago is its namesake city of Santiago, capital and largest city of Chile. Santiago is an intensely metropolitan city that seems perpetually in motion, with no shortage of things to do and sights to see, from the Historic Center to the markets to hiking opportunities even within the city itself.

Directly east of the Región Metropolitana de Santiago, about an hour and a half from Santiago proper, is the Región de Valparaíso, whose capital is the lovely port city of Valparaíso. Known for its steep hills, colorful houses, street art, universities, and busy piers, Valparaíso guarantees wonderful walks through its winding streets, and plenty to explore.

The house of Pablo Neruda is of particular interest, for which one can take one of Valparaíso’s famous funiculars to reach.

Also in the Región de Valparaíso, only fifteen minutes from Valparaíso, is Viña del Mar, offering a far different environment from Valparaíso’s colorful streets. Viña del Mar is famous for its beaches, promenade, and art deco-style casino, and its mixture of coastal highrises with old mansions and castles. 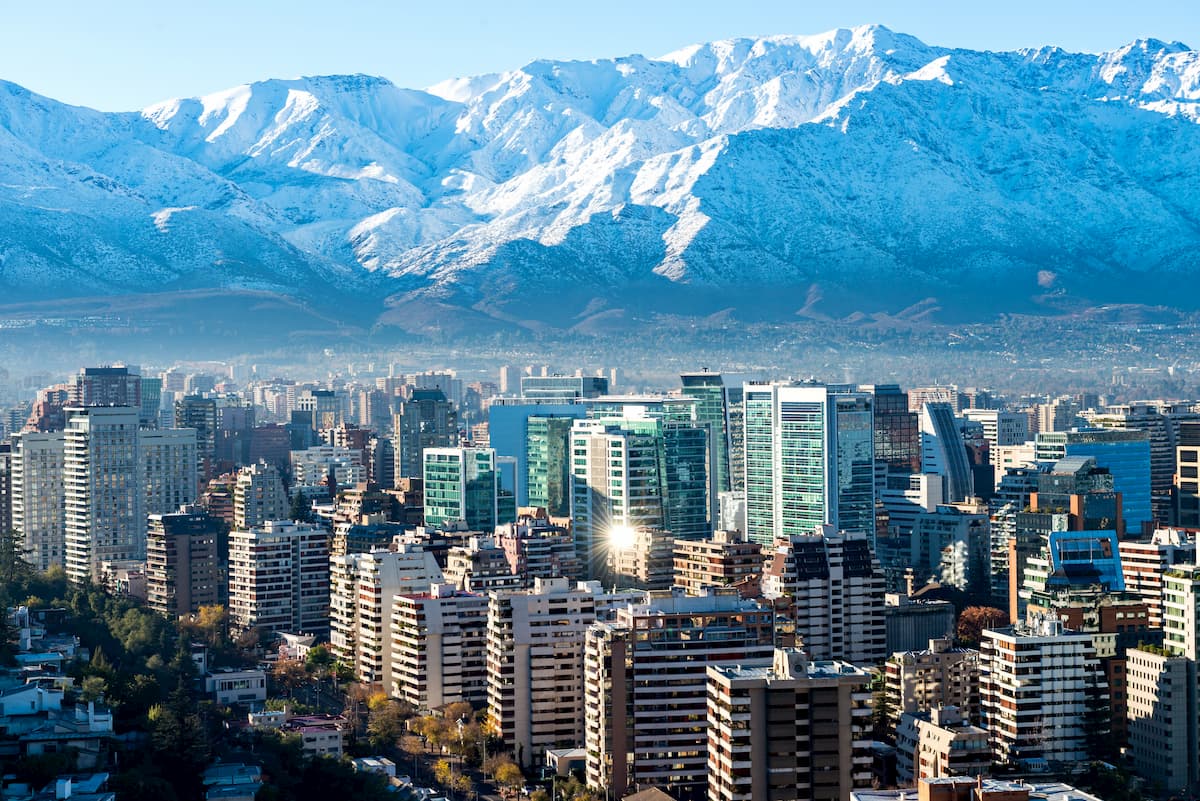 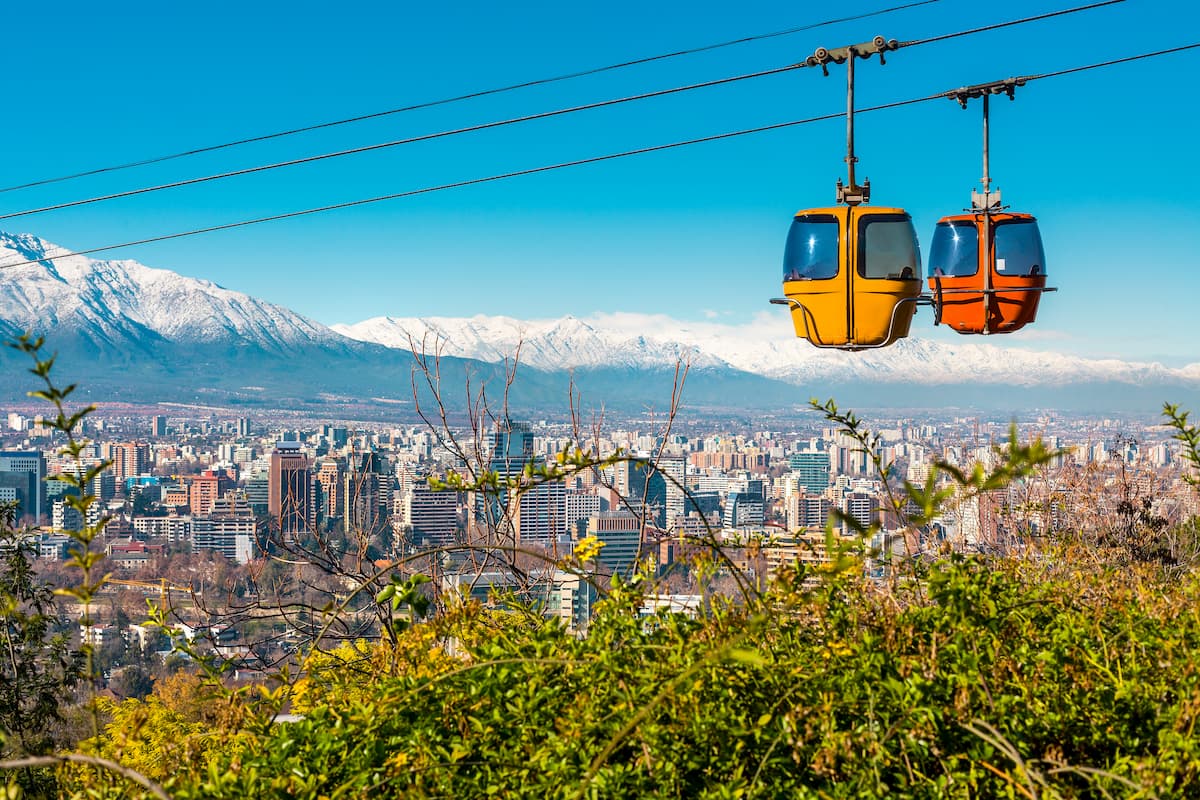 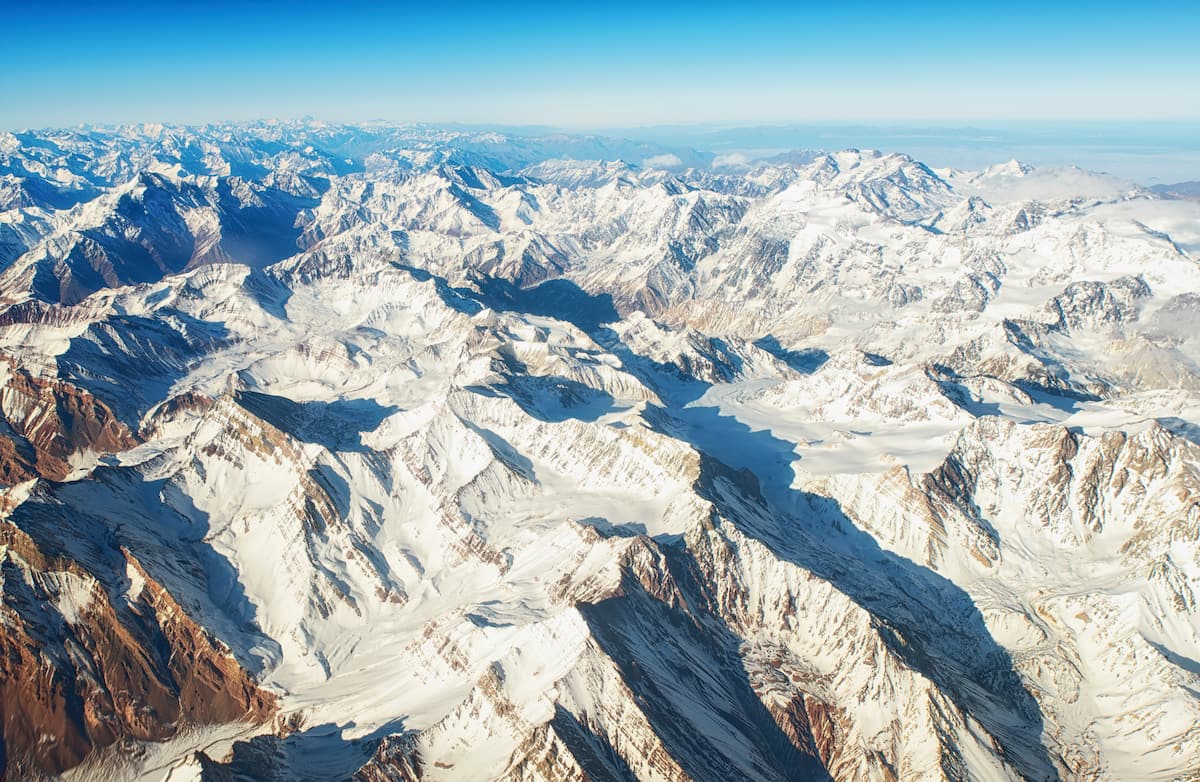 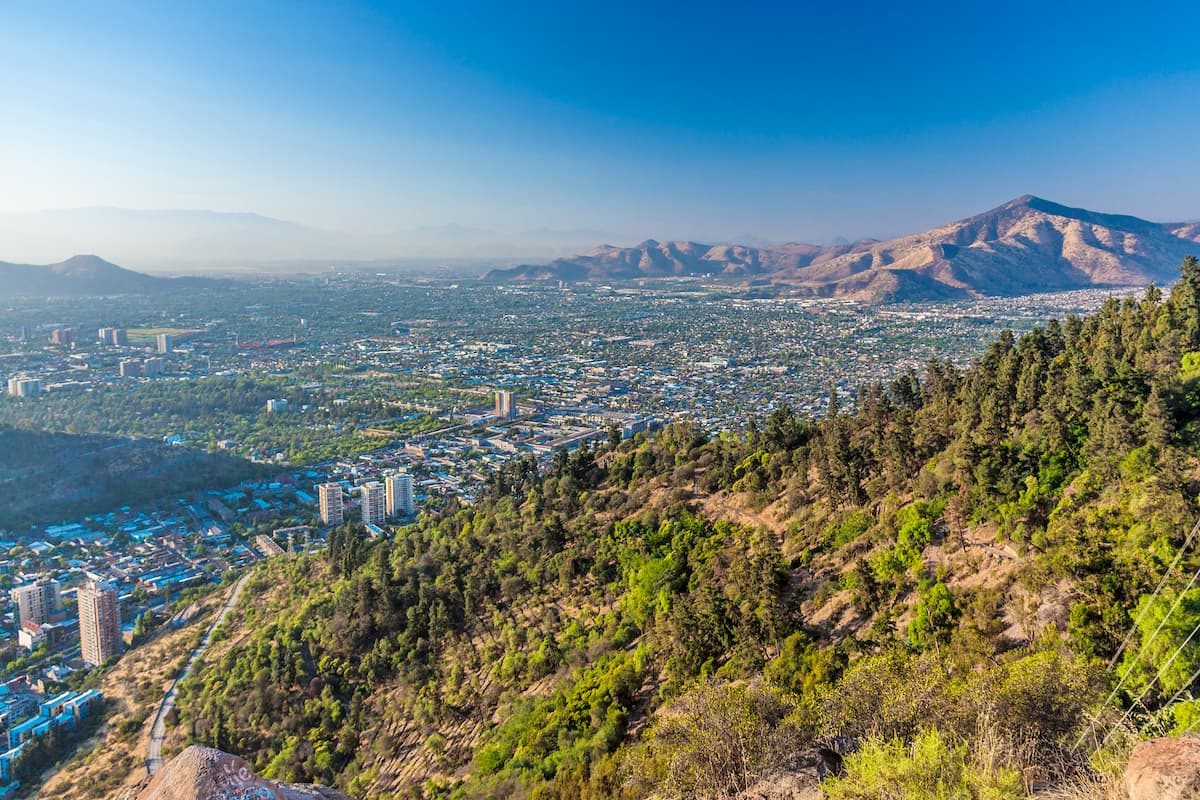 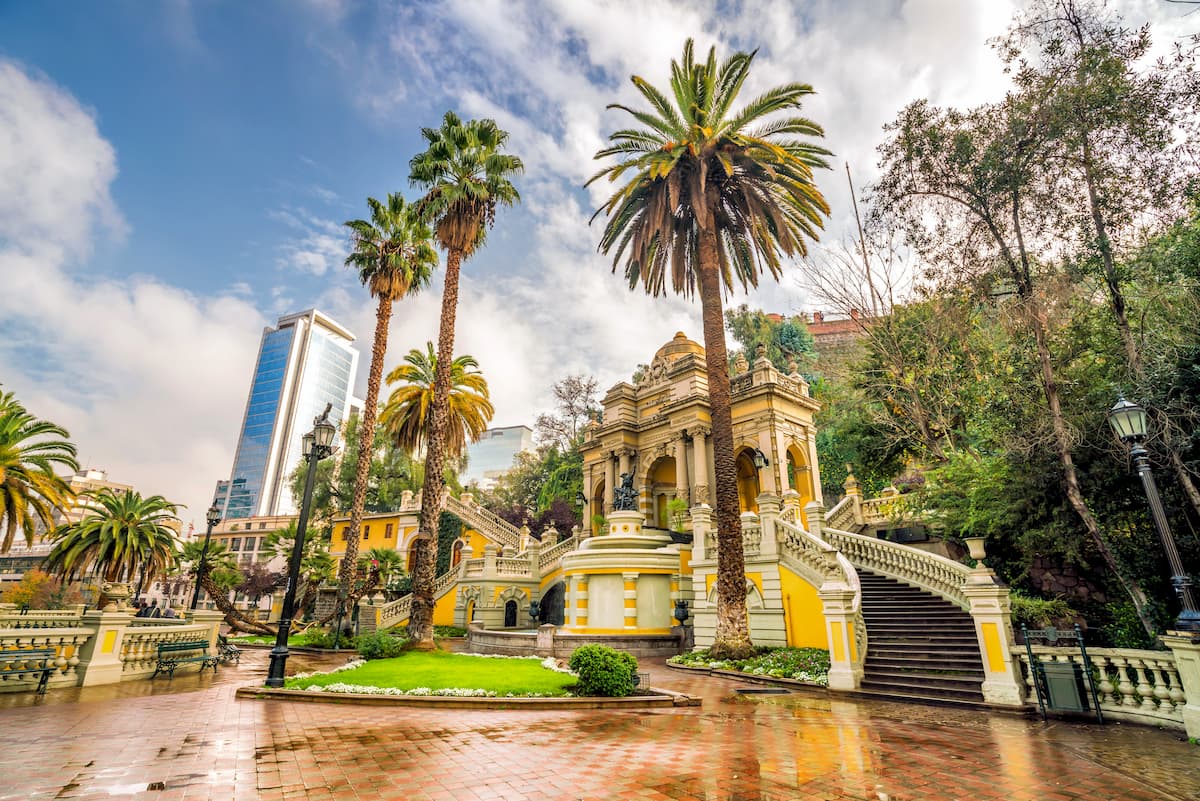 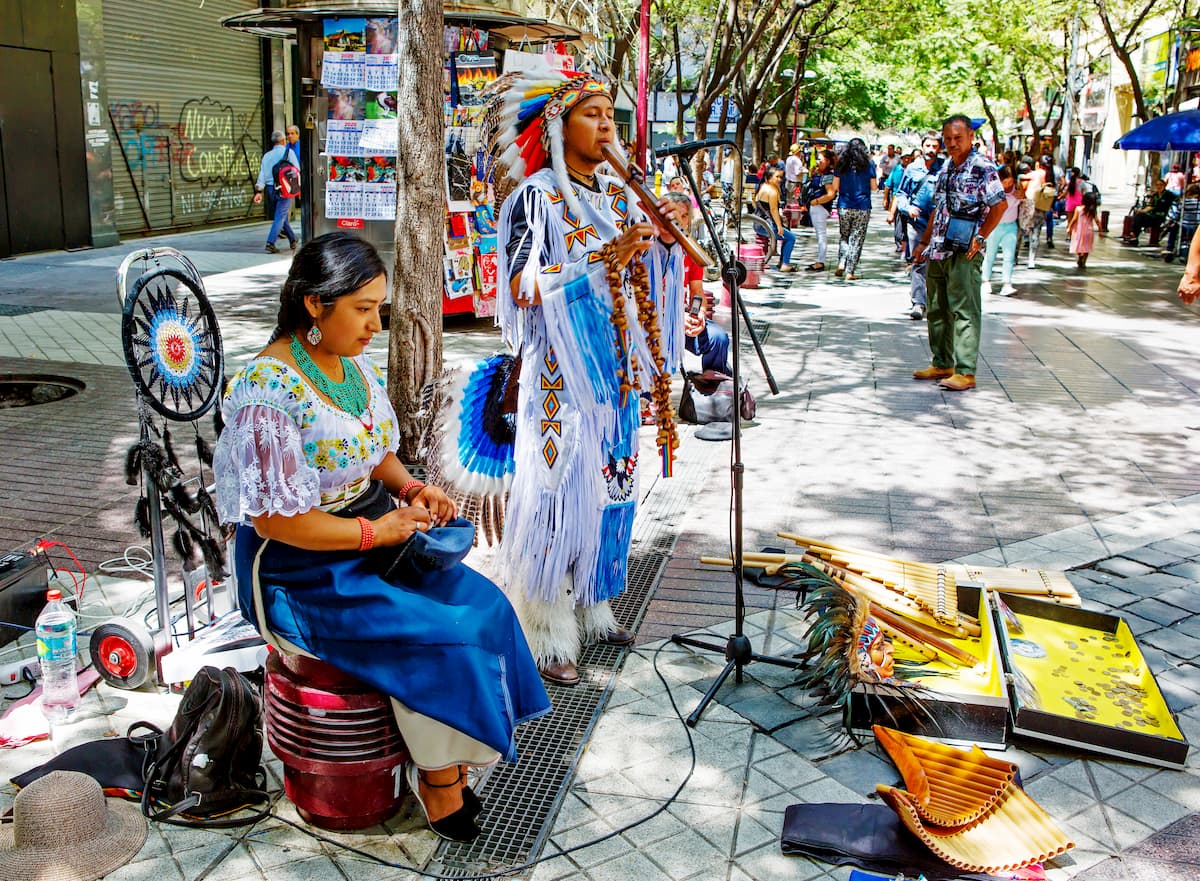