Hawaii
6
Mountains with prominence of 1 ⁠500 ⁠m / 4 ⁠921 ⁠ft or more.
Highpoint

Hawaii is infamous for its stunning sandy beaches and sparkling turquoise waters, but this beloved vacation destination is also home to some of the most impressive summits in the states. The state of Hawaii is the world’s largest island chain, containing almost the entire Hawaiian island chain - 137 islands spread over 1,500 miles. Though most visitors are only familiar with eight main islands – Ni’ihau, Kaua’i, O’ahu, Moloka’i, Lana’i, Kaho’olawe, Maui, and the ‘Big Island,’ or Hawai’i - the state of Hawaii actually contains several mostly uninhabited Northwestern Hawaiian Islands and atolls including 156-acre Nihoa, 40-acre Necker Island, and 913-acre Laysan. 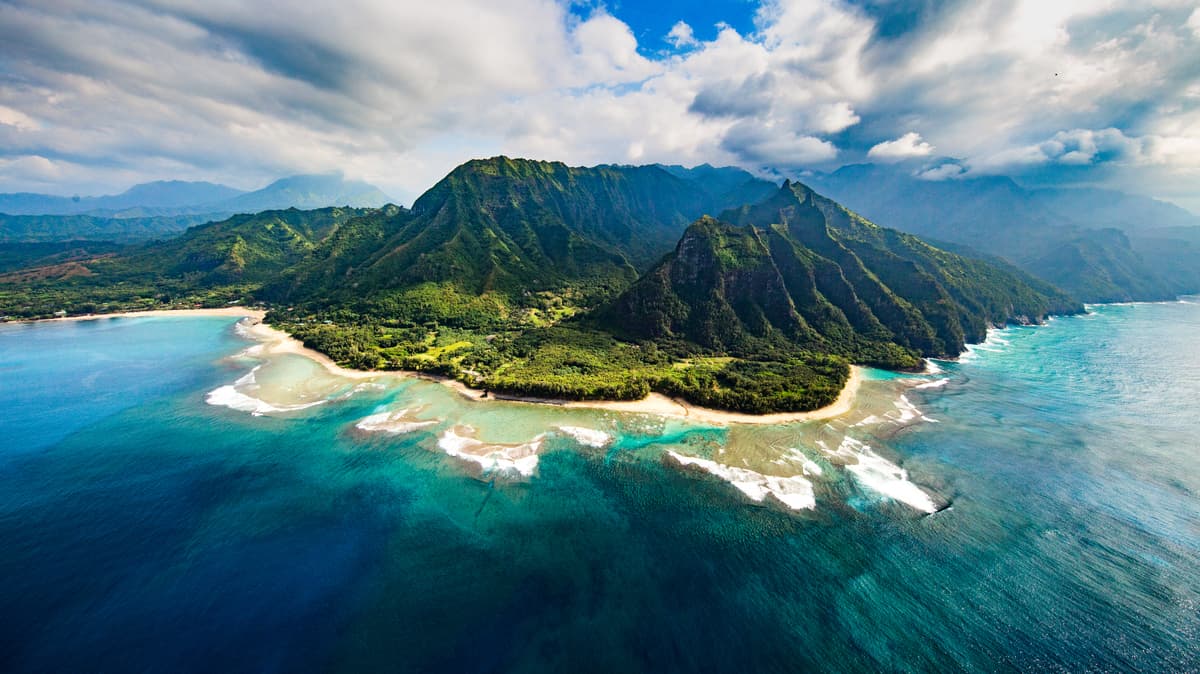 Though the early history of the islands is largely debated, it’s believed that the Hawaiian Islands have been inhabited continuously since approximately 300 B.C.E. The islands, which sit approximately 2,000 miles southwest of the continental U.S., were formed by undersea volcanic activity. As the Earth’s tectonic plates shifted over millions of years, a hotspot remained stationary, creating a series of volcanic islands.

Today, the largest and youngest island, the ‘Big Island,’ is the only island that is considered active due to its proximity to the hotspot. Most geologists believe that the ‘Big Island,’ is built from five shield volcanoes – Mauna Loa, Kohala, Mauna Kea, Hualalai, and Kilauea. However, new evidence points to two additional submarine volcanoes, Mahukona and Loihi, being involved in the island’s construction. Mauna Loa and Kilauea are still active, which means the island of Hawaii is still growing today. As recent as 2018, 875 acres were added to the island during the lower Puna eruption.

The topography of the Hawaiian Islands varies based on the island, but most of the islands contain illustrious mountain ranges and/or awe-inspiring summits with a unique past. The Ko’olau Range in O’ahu, for example, is actually the fragmented remnants of a single winward volcano – Ko’olau. In prehistoric times, the volcano’s entire eastern half slid into the Pacific Ocean, leaving behind characteristically serrated precipice or ‘pali,’ that rises abruptly from the ocean. Like the Ko’olau Range, the Waianae Mountains are also the remnants of an eroded shield volcano. The Waianae Mountains shape the western half of O’ahu and contain the island’s tallest peak, Ka’ala.

Another noteworthy mountain range, the Hanalei Mountains, contain three of the most iconic and prominent peaks on the island of Kauai – Hihimanu, Namolokama, and Mamalahoa. These three rugged summits form an impressive mountain ridge that is known for its numerous cascading waterfalls.

The second-largest island of the Hawaiian Islands, Maui, is also made up of two massive shield volcanoes – Haleakala, which is known as the East Maui Volcano, and Mauna Kahalawai, or the West Maui Mountains. Haleakala is the younger of the two and rises more than 10,000 feet above sea level, measuring 5 miles from sea floor to summit.

The Kalalau Trail is often referred to as one of the most incredible hikes in America. The trail highlights the beauty of Kauai’s incredible Na Pali Coastline, arguably one of the most stunning lengths of coastline in the world. The trail wanders along eroded, weathered cliffs, periodically offering sweeping views of the beautiful beaches and aquamarine waters below. The first section of the trail is a popular day hike that stretches from Ke’e Beach to Hanakapi’ai Beach. Beyond the first leg of the trail, hikers will need to obtain permits to continue to Kalalau Beach.

Aptly nicknamed the “Grand Canyon of the Pacific,” Waimea Canyon is 14 miles long, 1 mile wide and more than 3,600-foot deep. Colorfully decorated in red, brown and green hues, this incredible landscape was carved out millions of years ago by the Waimea River and volcanic activity. Several scenic viewpoints are available for visitors that just want to drop by and snap some photos of the scenery. For more of an adventure, consider hiking the Canyon Trail or to Kumuwela Lookout.

Nestled on the edge of Waikiki Coast, Diamond Head is one of Oahu’s most iconic landmarks. Locals refer to it as Le’ahi (brow of the tuna), referencing the formation’s incredible, jagged ridgeline, and in the 19th century, British soldiers thought the sparkling calcite crystals on a nearby beach were diamonds. This steep trek takes hikers to the edge of a 300,000-year-old crater and features sweeping coastal views.

Mauna Kea is the highest summit in Hawaii, and, if it were measured from its base beneath the ocean to the summit, it would be the tallest mountain in the world. Several trails exist surrounding Mauna Kea, including the Mauna Kea Trail, which climbs from 9,200 feet to the summit, which sits at nearly 14,000 feet. Mauna Kea is also one of the only places in the world where you can drive from sea level to 14,000 feet in just 2 hours. Mauna Kea’s summit houses the world’s largest observatory, making it a popular destination for stargazing – research teams from eleven different countries operate 13 telescopes on Mauna Kea.

Known as “The Valley Isle,” Maui is the second largest Hawaiian Island and one of the state’s most popular tourist destinations. In addition to housing world-famous beaches, like Ka’anapali Beach and Honolua Bay, Maui is home to 33, 265-acre Haleakala National Park, a scenic region known for its incredible summits, star-filled skies, and lush waterfalls. After watching the sunrise at Haleakala, consider dropping by the historic town of Lahaina or driving the island’s iconic Road to Hana to snap photos of Maui’s spectacular scenery. When you’re ready to kick back and relax, book one of Maui’s picturesque beachside accommodations - a variety of hotels, resorts, and private accommodations cover the shoreline.

Oahu is known as “The Gathering Place,” for good reason. Home to the state capitol, Honolulu, Oahu has a reputation for being a vibrant island packed with both natural and cultural wonders. Oahu is home to the infamous North Shore, a 17-mile stretch of coast that is particularly popular amongst surfers, snorkelers, and general beachcombers. After spending the day hanging out at the beach, consider dropping by one of the memorials or museums dedicated to Pearl Harbor or hit the trail and climb Mount Lahilahi or Oahu’s famed crater – Diamond Head.

If you love lush, green scenery with fewer crowds, Kauai is the perfect island for you. Kauai is “The Garden Island,” and is best-known for its recognizable Na Pali coastline, Waialeale’s ‘weeping wall,’ and incredible Waimea Canyon. Kauai has a reputation for being the ‘romantic’ island, receiving far less tourists than its neighboring islands. Hiking to sweeping coastal views and kicking back at secluded beaches are two of the most popular activities on the island, so you can expect to get plenty of rest and relaxation after hitting the trail. 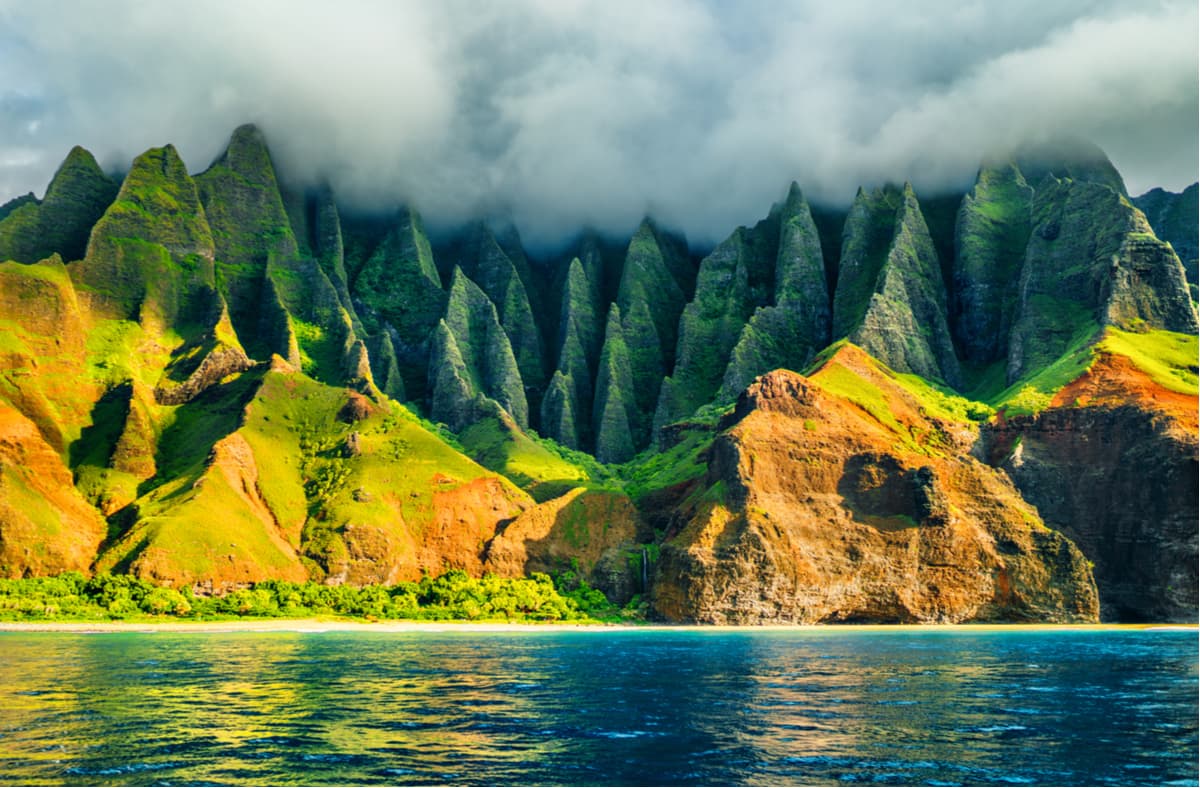 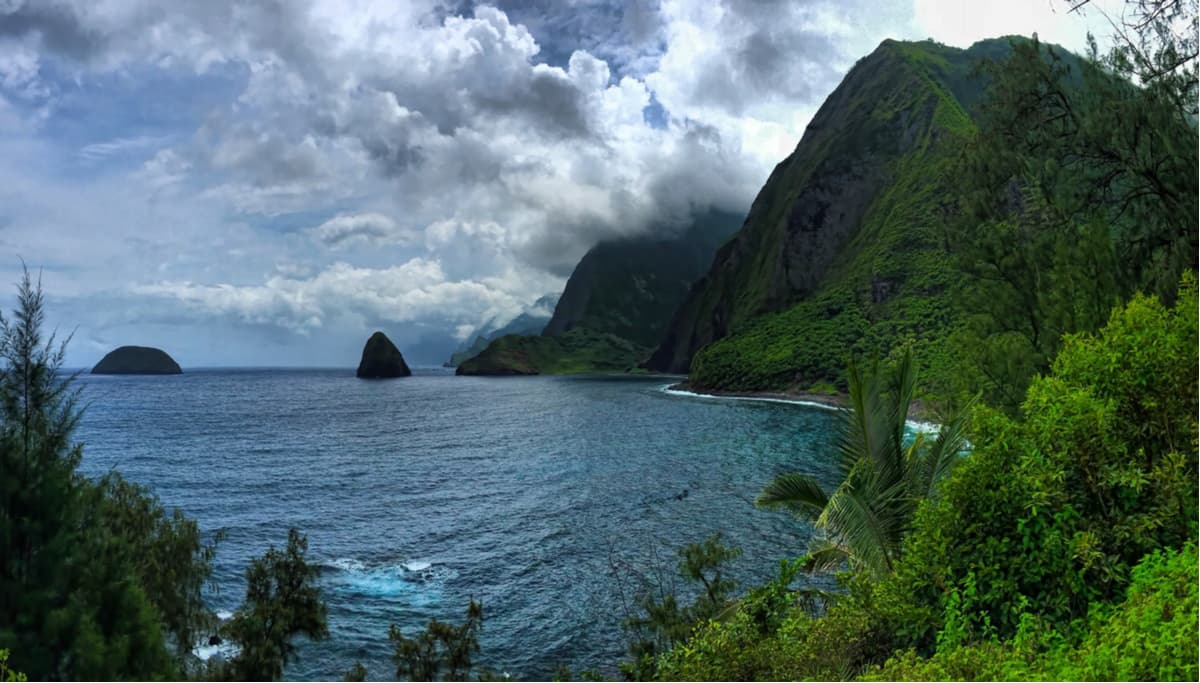 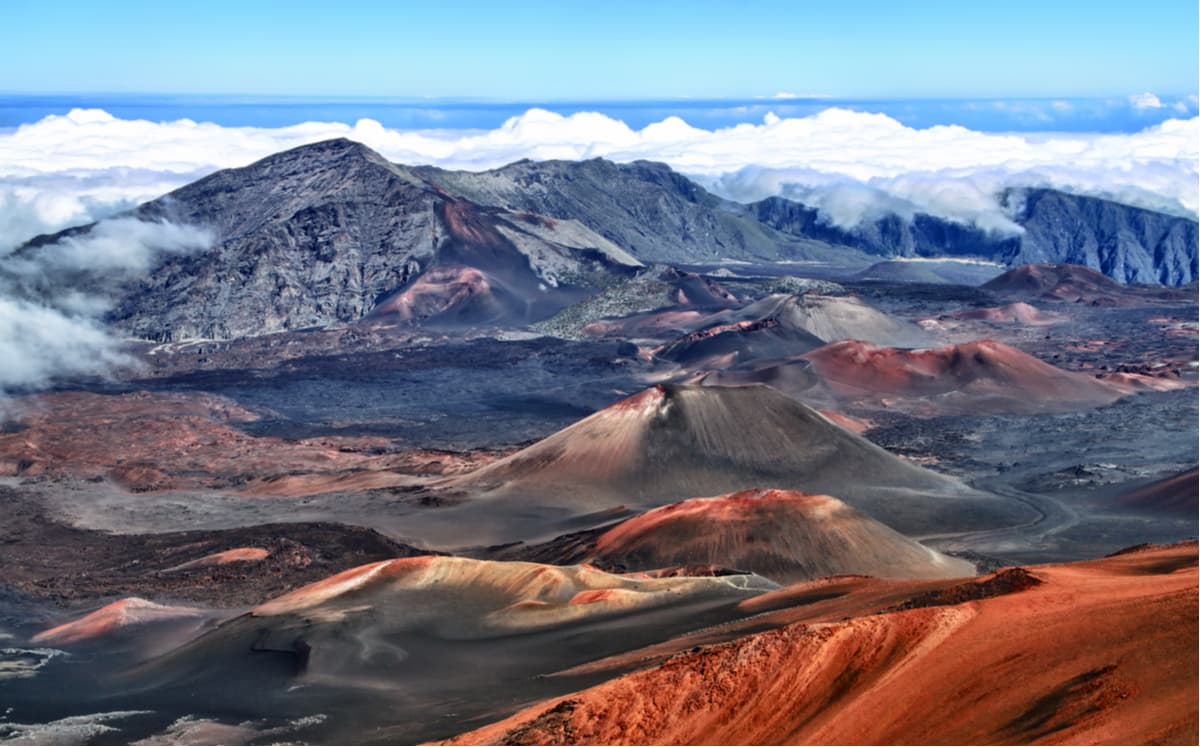 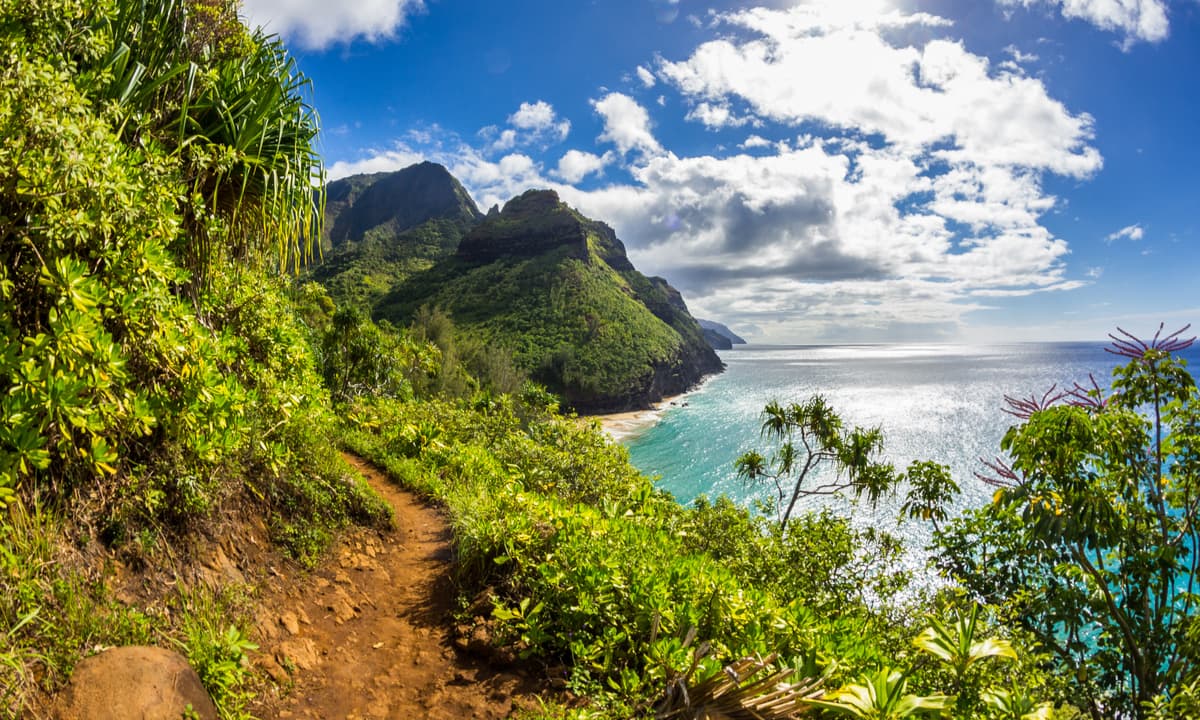 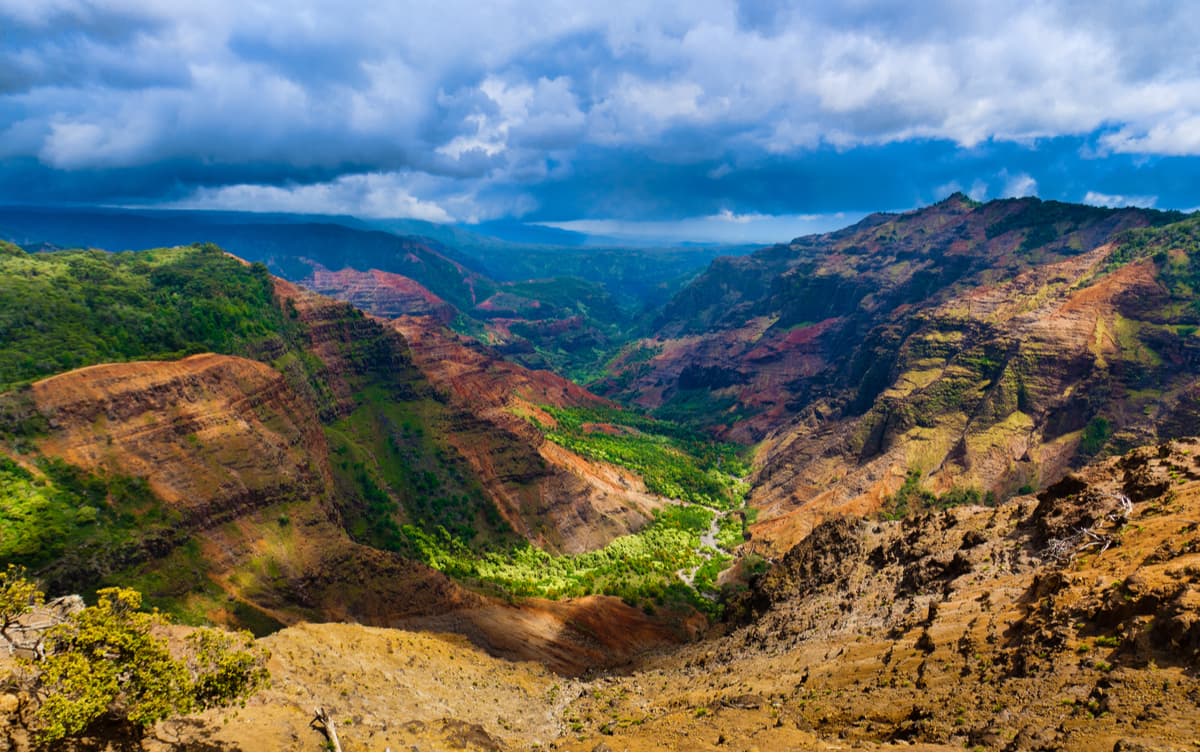 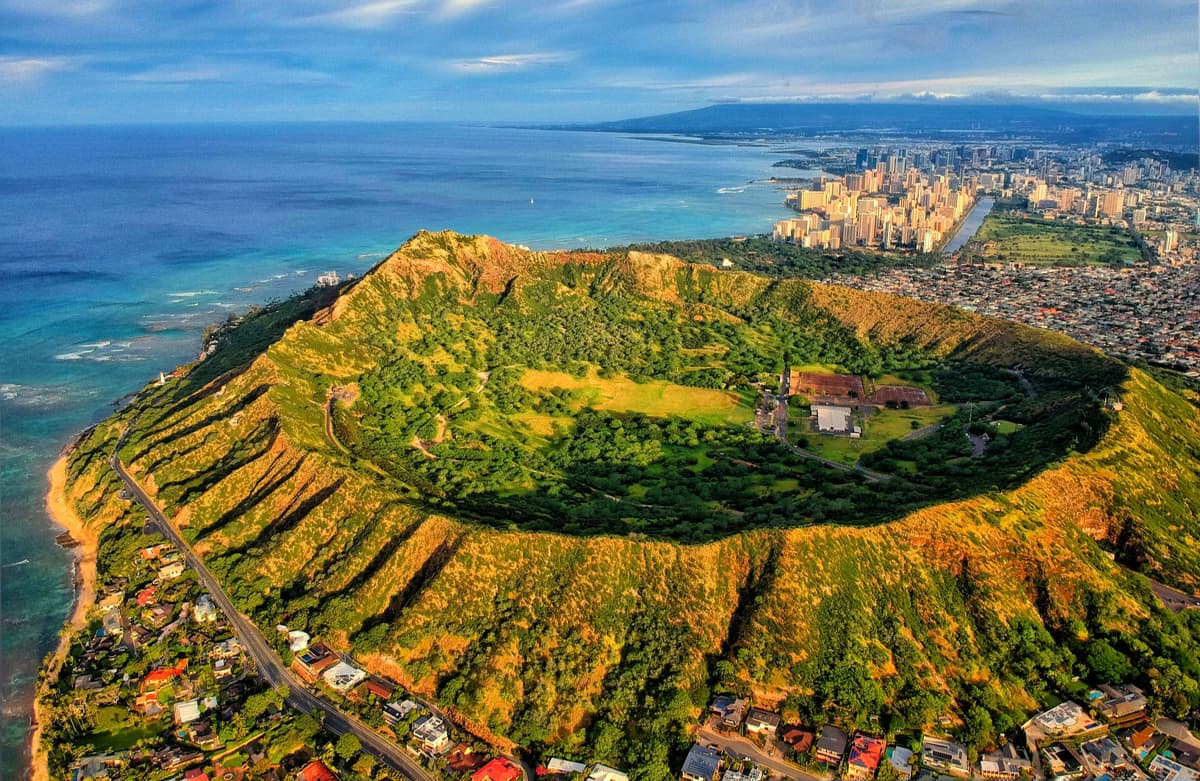 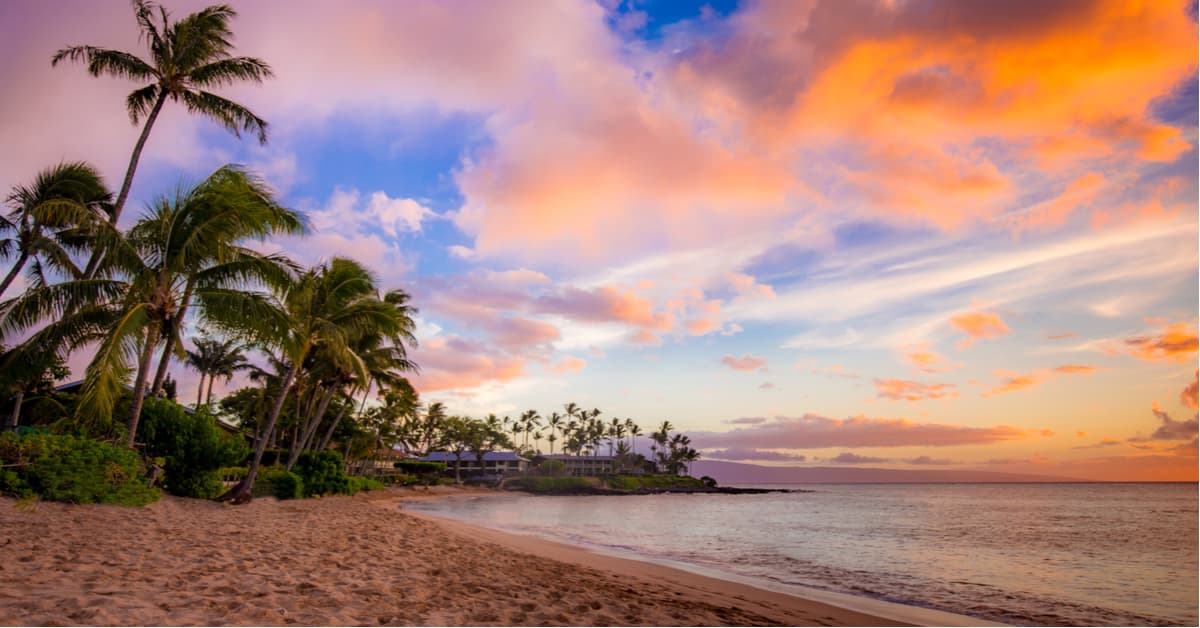