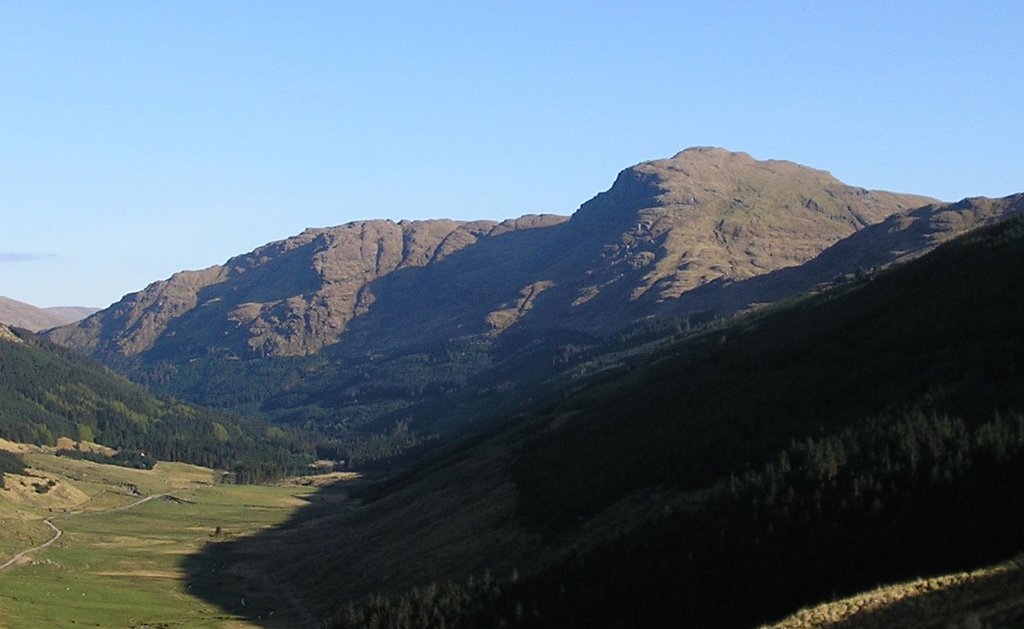 Add photo
787 m
Elevation
Elevation is the altitude of a place
above sea level.

402 m
Prominence
Peak’s prominence is the least
vertical to be covered to get from the
summit to any other higher terrain.

The Brack is a mountain, located in the Arrochar Alps, on the south side of Glen Croe, near Loch Goil in Argyll and Bute in Scotland. The Brack has two summits: the lower peak, Cruach Fhiarach, can be seen from the shores of Loch Long, and the main peak is seen from Glen Croe and Loch Goil.

The Brack is in the Ardgoil range, which is located on a peninsula bounded on the west by Loch Goil and Loch Long on the east, both lochs being arms of the Firth of Clyde. The Brack is connected by ridges to Ben Donich and Cnoc Coinnich, and is surrounded by a number of higher peaks. It is classified as a Corbett.

New Panorama Tools
Trace location on the map
Measure distances
All the instruments are available in the context menu as well.
Loading The Brack panorama
Teleport
The Brack
787 m
News
PeakVisor App
Mountain Pulse About PeakVisor Contact Us Sign In API
Your Personal Mountain Guide
Import Photo
Adjustments
Share
Cancel
Import Photo
Upload any photo made with your phone which has location data embedded.
Otherwise, you could manually setup its location on a map.
Drop photo here
or
Select photo
GPS
Upload
Adjustments
Fine tune panorama parameters to make a perfect match
Location
GPS
Change
Altitude
Photo Title
Overlay Mode
Save
to zoom in / out
to rotate
+Shift to move